Montana’s landscapes are epic. Glacier National Park sprawls across the northwest, Yellowstone National Park sits in the state’s southeast corner near Wyoming and Idaho, and a swath of national forests connects the two.

Unfortunately, the crowds at those national parks are also pretty epic.

However, the state parks in the state are blessed with just as much beauty but a fraction of the traffic. Here are seven state parks in Montana you need to visit if you want to see epic Big Sky scenery, significant historical sites — oh, and hardly any other visitors. 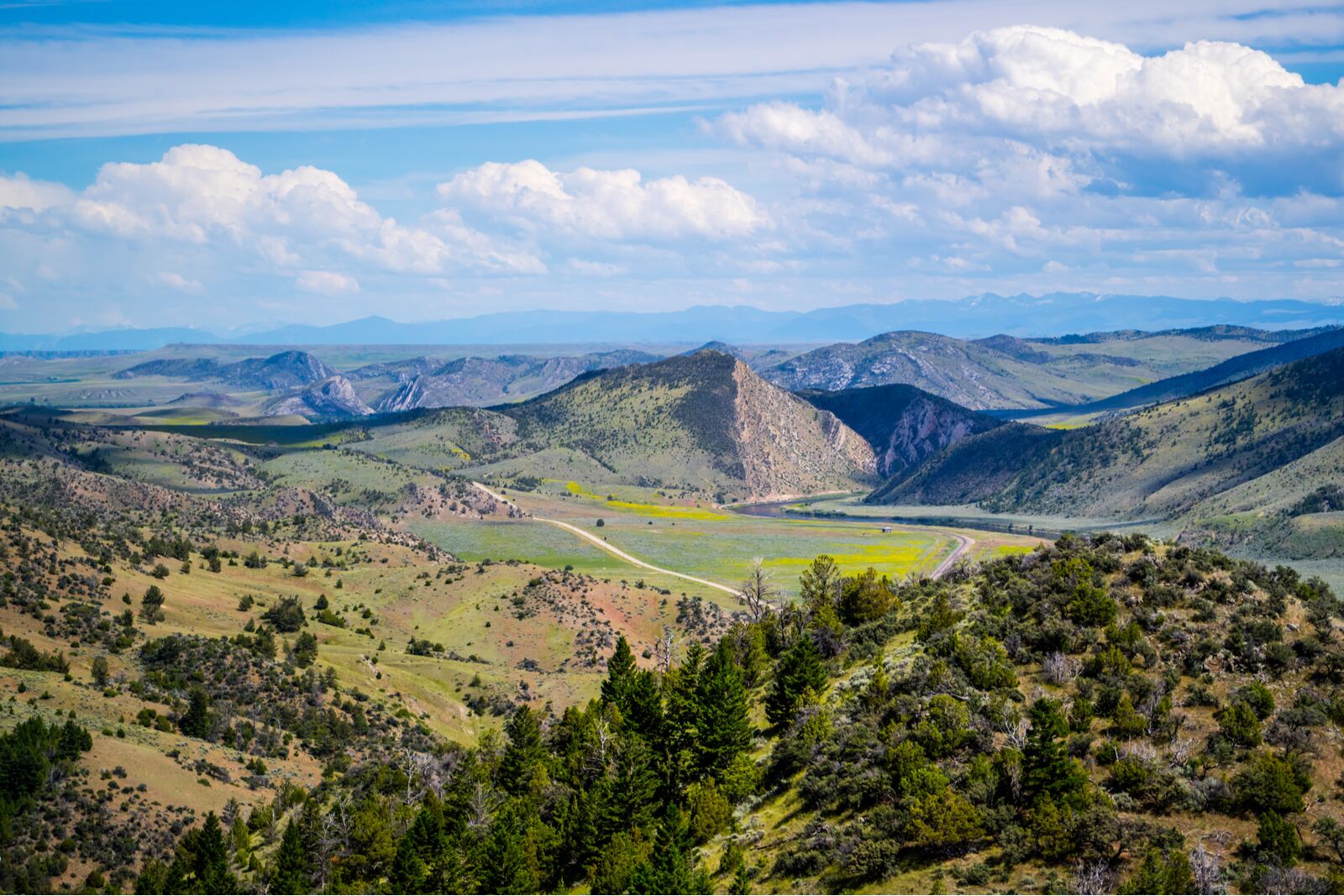 The very first state park in Montana, Lewis and Clark Caverns shares its name with its main attraction: a massive limestone cave complex that plunges roughly 400 feet underground. The caverns were initially listed as a national monument in 1908 but lost their status in 1937. The National Park System’s loss was Montana’s gain, leading to the creation of its state park program that same year.

Guided tours allow visitors to explore deep within the complex between May and September. You have to climb about 600 stairs to get to the belly of the caverns, but if that’s not enough to get your 7,000 steps for the day, the park has 10 miles of hiking trails open year-round. Campers are also welcome at the park’s 40 tent sites, three cabins, and single traditional canvas tent that can be reserved online. 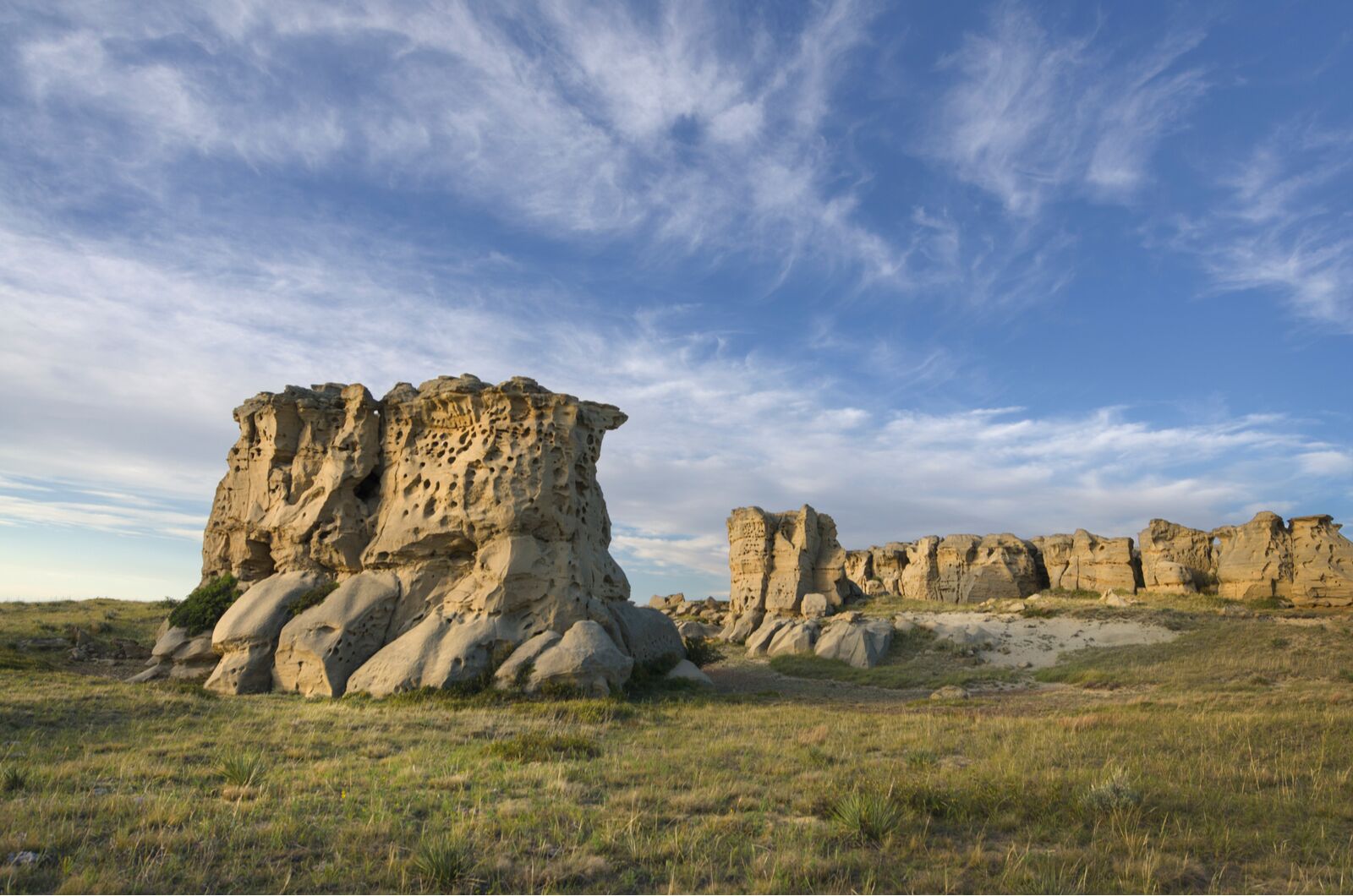 Years before Teddy Roosevelt became president, he visited what is now Medicine Rocks State Park on the eastern edge of Montana. In an 1883 journal entry, he described it as “a fantastically beautiful a place as [he had] ever seen.” That’s high praise coming from a man who would later designate five national parks, 18 national monuments, and 150 national forests. But what can we say? The “conservationist president” had an eye for landscapes worth preserving.

Sandstone pillars with weather-carved holes are the pinnacle — or rather pinnacles — of beauty at this state park. Humans also carved the site’s rock formations, from petroglyphs etched by Indigenous peoples while gathering medicinal plants to inscriptions made by European explorers and settlers. Exactly six decades after Medicine Rocks became a state park in Montana, these artifacts helped land it a spot on the National Register of Historic Places (in 2017). 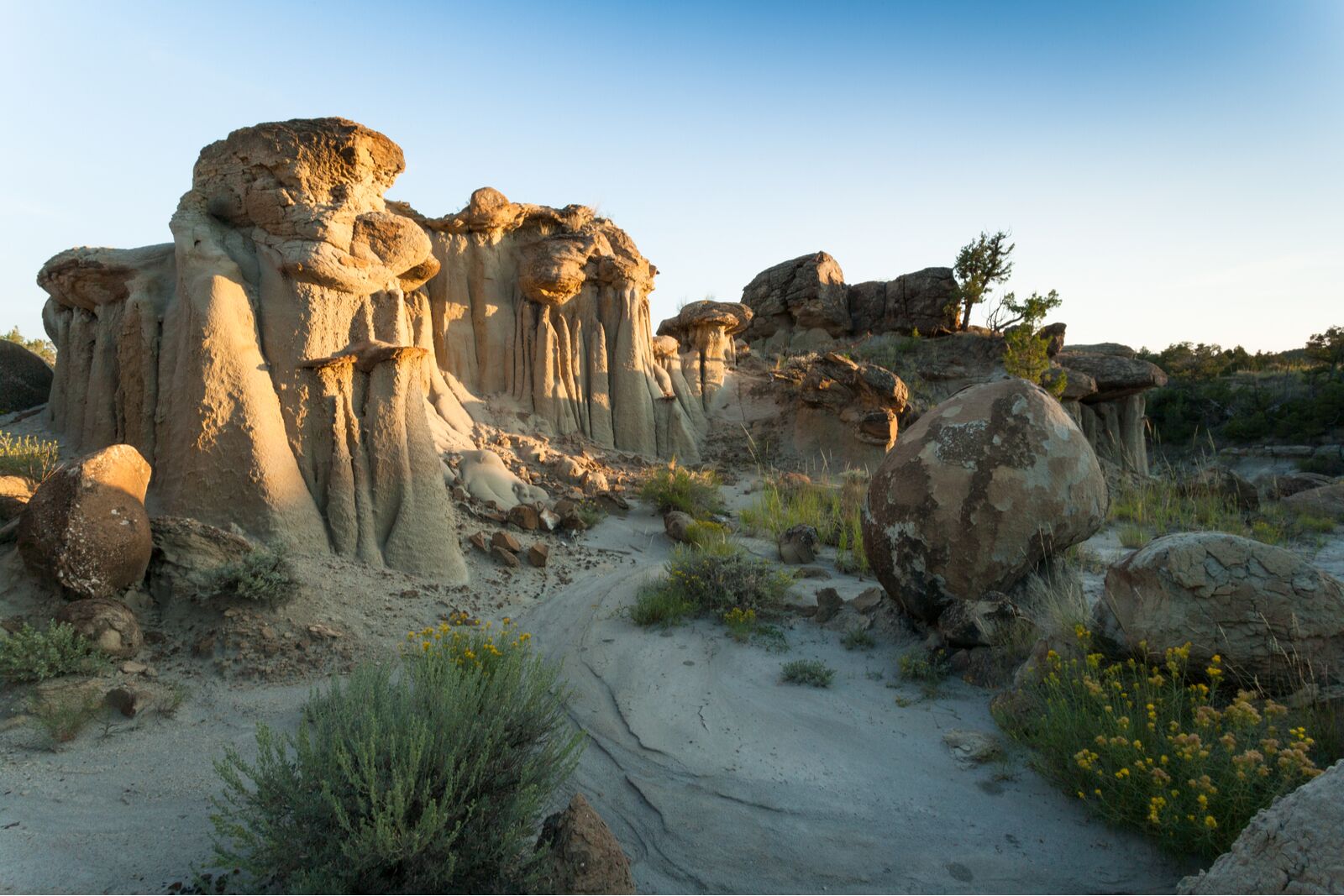 Covering almost 12,000 acres of badlands near the North Dakota border, Makoshika is the largest state park in Montana. (The name Makoshika comes from the Lakota phrase for “bad land.”) Even more impressive than the park’s size is the size of the dinosaur fossils paleontologists have discovered here, including various T-rex remains and a near-complete triceratops skull on display in the visitor center.

You’ll see more flora than fauna these days; notably the pines and junipers dotting the park’s 11 designated hiking trails and 28 campsites. Makoshika also hosts events throughout the year, such as Friday night campfires and a Buzzard Day festival every June with activities like a half marathon, mini train rides, a corn hole tournament, and more. 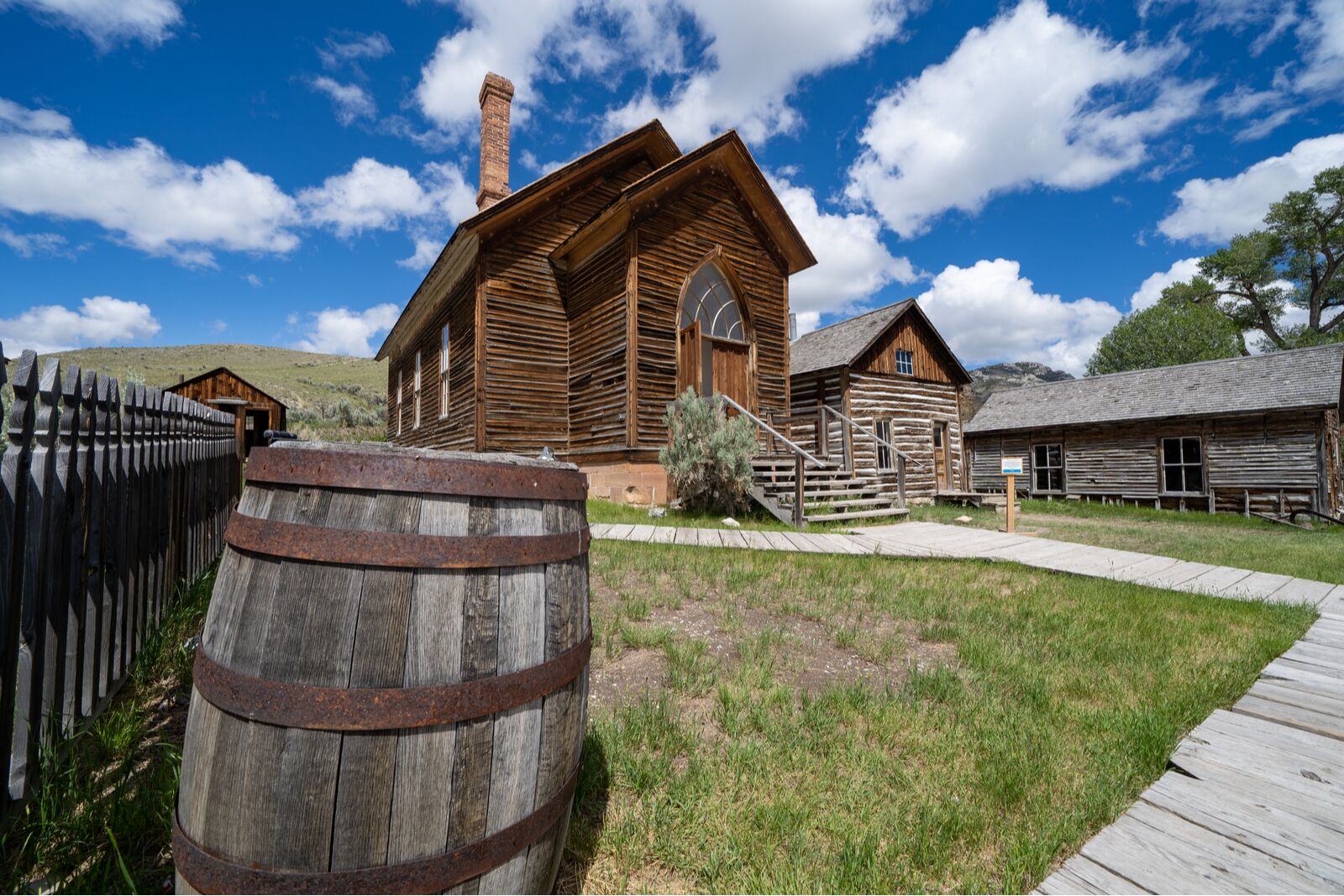 It’s ironic that one of Montana’s most famous ghost towns is nestled between two of it’s most populous cities. About three hours from Bozeman and Missoula, Bannack saw a brief population surge in the mid-1800s after gold was discovered in the area. Prospectors erected a town center with more than 50 structures still standing today, despite being abandoned for almost a century.

To see what life was like in Bannack’s prime, go during the Bannack Days festivities the third weekend in July. The park stages reenactments of pioneer life, organizes activities like horse-drawn carriage rides, and lets visitors try their hand at gold-panning. You can also take an educational tour of the ghost town anytime between Memorial Day and Labor Day. Bannack State Park is ripe for outdoor recreation for the rest of the year, be it hiking or biking along Grasshopper Creek, fishing, or ice skating once the park’s pond has frozen over. 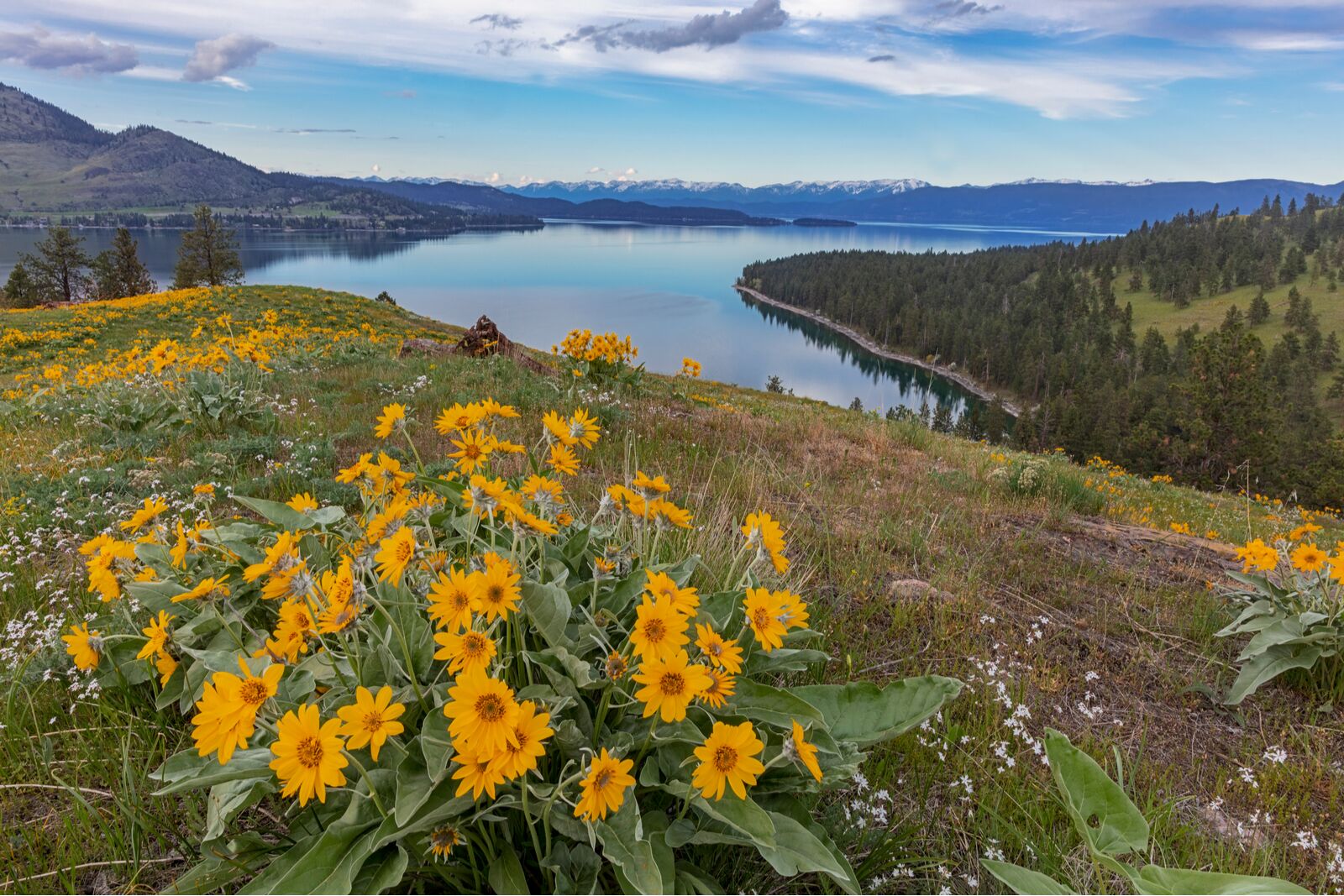 Watching wild horses roam freely is a special experience. Watching them wander the shores of their very own island is something else. A state park since 1977, Wild Horse Island is the largest island in Flathead Lake, which is the largest freshwater lake in Montana. It’s a traditional territory of the Kootenai people and now falls within the Confederated Salish and Kootenai Tribes Flathead Reservation. Long ago, the tribes sequestered horses on the island to stop them from being taken by other tribes. Five horses remain there today.

Visitors might also spot bighorn sheep, bald eagles, and black or grizzly bears on the island. Camping is not permitted, but day-trippers are welcome to boat, hike, swim, and fish there, provided they acquire a tribal fishing license. To get to the island, book a charter through Pointer Scenic Cruises in Bigfork or rent a kayak in Big Arm and start paddling. You’ll get there in about 45 minutes. 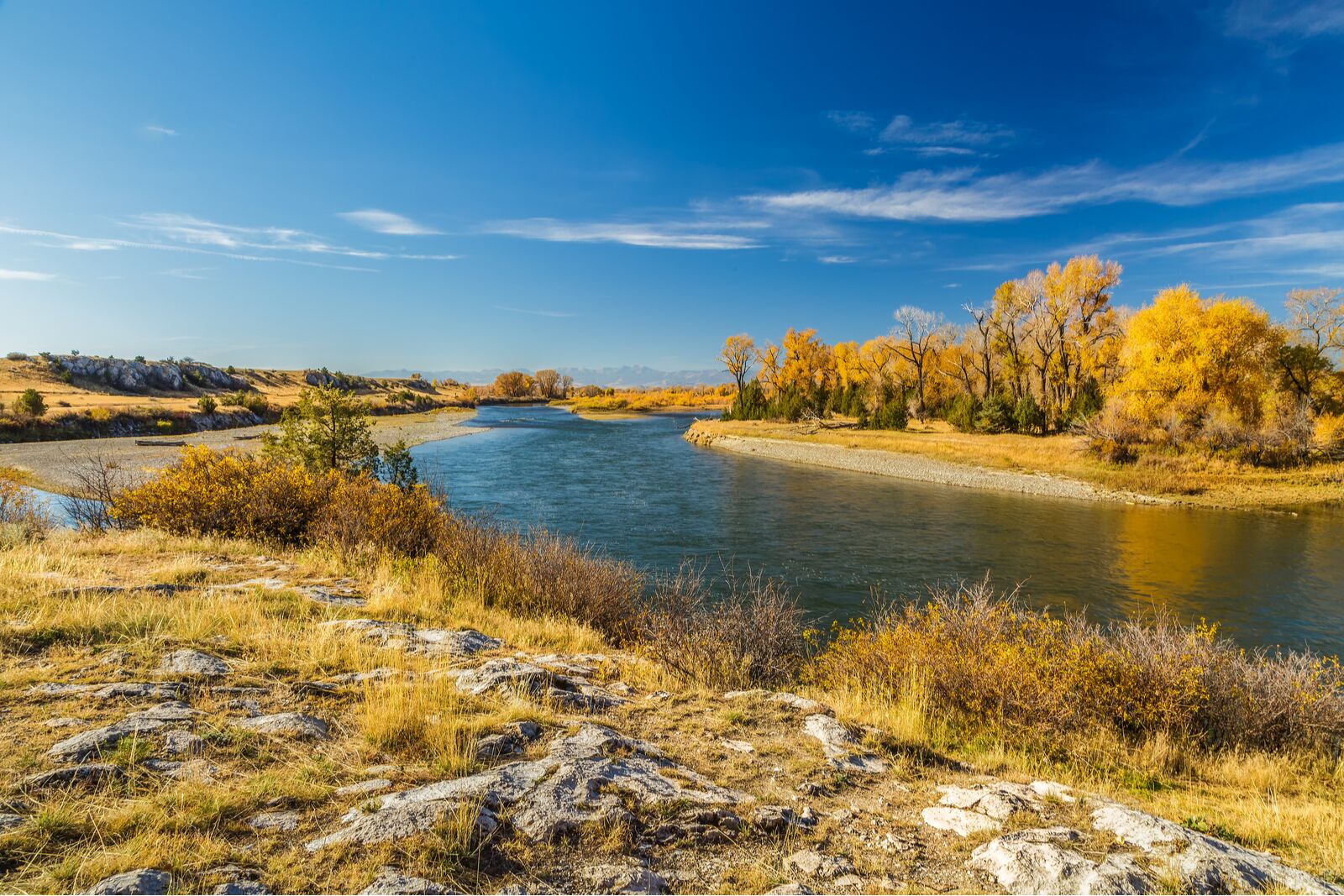 Modern explorers looking to retrace Lewis and Clark’s footsteps through Montana should put camping at Missouri Headwaters State Park on their must-visit lists. Sacajawea (or Sacagawea), the expedition’s Shoshone interpreter and guide, led the Corps of Discovery here in 1805, five years after she was abducted from the area as a child by a rival tribe.

At the confluence of the Jefferson, Madison, and Gallatin Rivers — from which the Missouri River Flows — the supremely fertile park is a microcosm for much of the wildlife you’ll see in Montana. Moose roam the plains, multiple trout species swim in the rivers, and more than 100 bird species nest in the wetlands. Evidence of the area’s human history is also peppered throughout the park, from the pictographs at Fort Rock to relics of the long-abandoned Gallatin City settlement. Look out for interpretive signs as you explore to learn more about the park’s cultural and natural heritage. 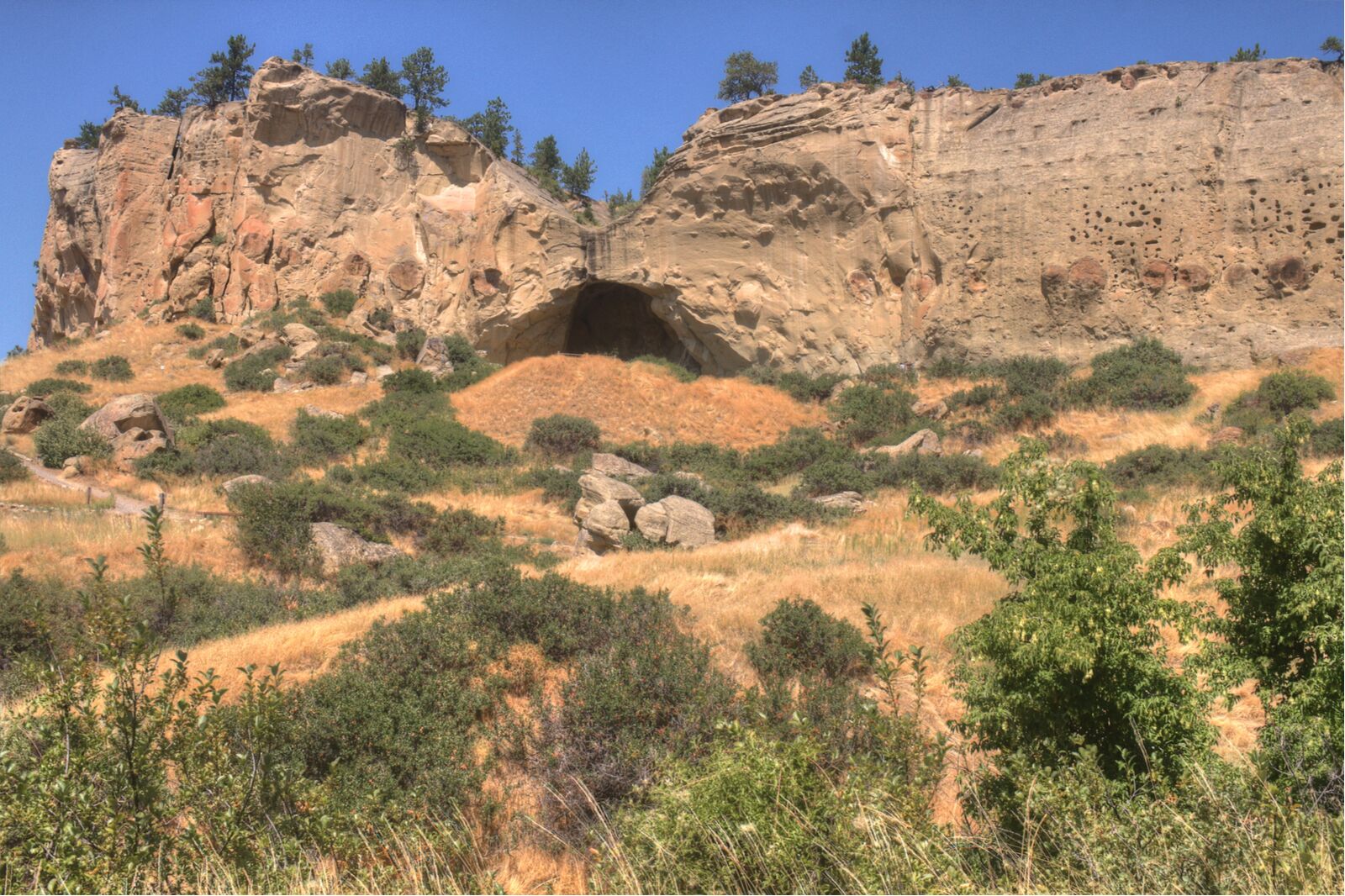 The big draw at this state park five miles south of Billings, Montana, is right in the name. The site contains three caves — Pictograph, Middle, and Ghost — that showcase hundreds of rock paintings dating up to 2,000 years old. The oldest pictographs are black-and-white images of man and animals drawn by ancient hunters. Later inhabitants left red markings depicting modern technologies such as rifles; those images date back some 200 to 500 years. Tens of thousands of prehistoric artifacts such as stone tools and artifacts were also excavated from the site in the 1930s and 1940s.

Pictograph is the largest of the three caves and was added to the register of National Historic Landmarks in 1964. It measures roughly 160 feet wide and 45 feet deep, so binoculars are recommended for optimal viewing. All three caves are connected by a three-quarter-mile interpretive trail, but be sure to take your time at the interesting visitor center before you head out. After, enjoy the picnic facilities while soaking up the panoramas.