From the remote mountains of India to the heart of New York City, animal art has been an integral part of humanity’s artistic legacy for centuries. Whether a tribute to a thousand-year-old myth or a physical representation of our insurmountable spirit, animal statues are a testament of creativity and connection to nature. Some serve purely as objects of admiration while others draw worshippers who lay offerings at their feet as a form of prayer to a higher power. Here is where you can find the seven most majestic animal statues around the globe. 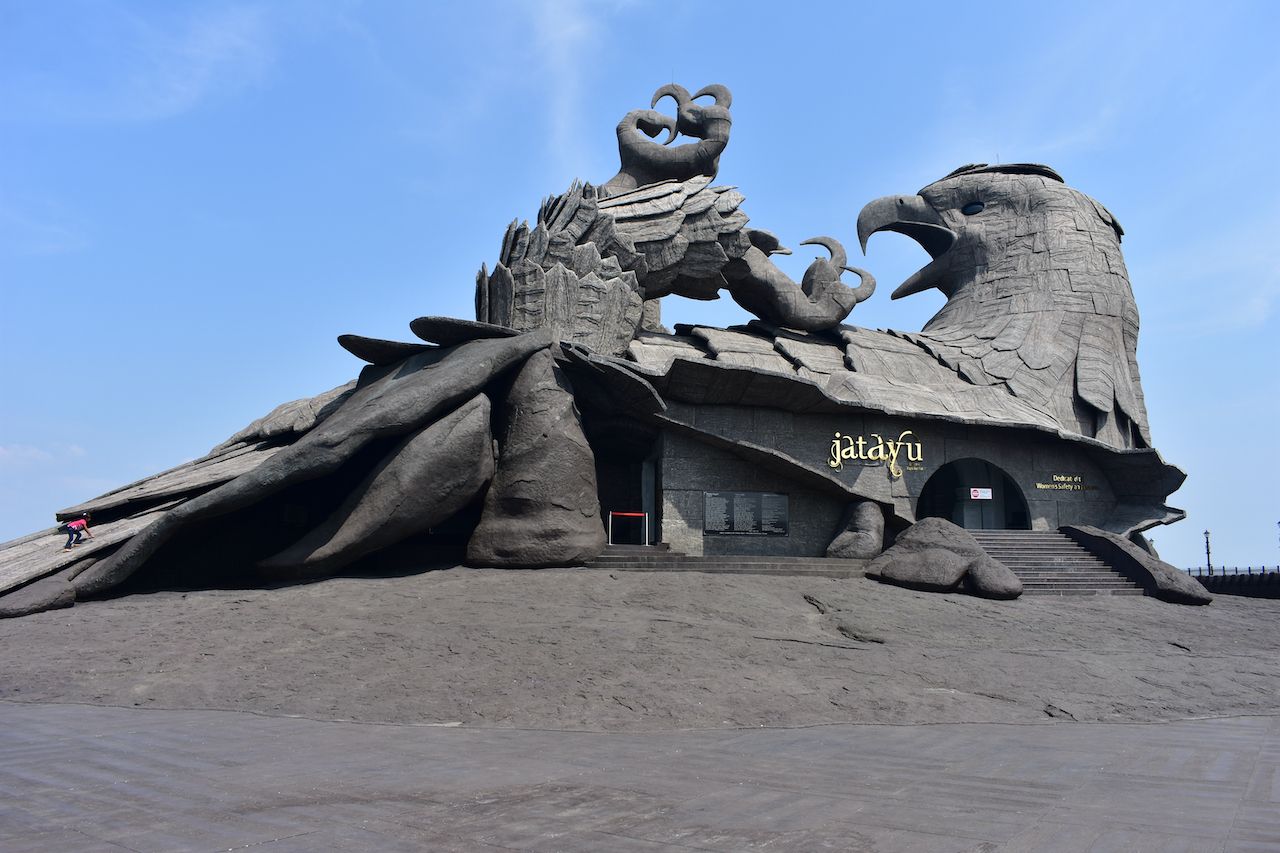 At 200 feet long, 150 feet high, and 70 feet wide, Kerala’s eagle sculpture is mighty impressive. A fierce eagle depicted on its back with its right wing stretched out, the sculpture is a part of the theme park in Kerala’s Kollam district. This is said to be the exact spot where the mythical eagle Jatayu fell, unsuccessful in his attempt to rescue Sita, the wife of Lord Rama who was kidnapped by a demon. The demon supposedly cut off the eagle’s left wing and the pain is portrayed in the bird’s face, contorted in pain. The legend comes from the Ramayana, one of India’s fundamental collections of epics, dating back to the third century BCE. 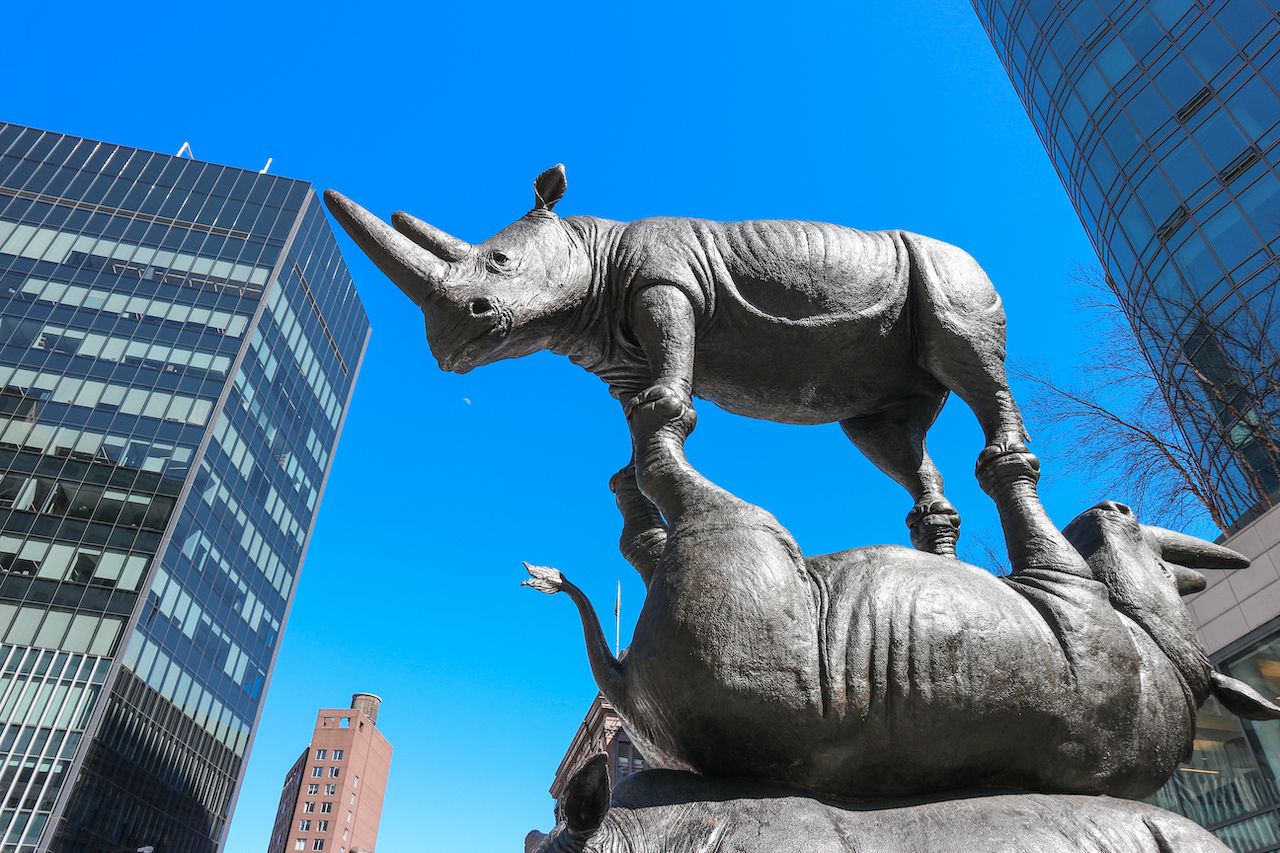 New York City has more than just the Charging Bull — another iconic wildlife monument is located right in Astor Place. The three-layer, 17-foot bronze sculpture portrays three northern white rhinos stacked on top of each other in an acrobatic stance where the animal in the middle is upside down. The purpose of it is to promote awareness of the white rhino’s terrible plight.

The northern white rhino is the second-largest mammal on the planet and is critically endangered, hovering around the brink of extinction. Symbolically, the sculpture depicts only three rhinos, as this is the number of animals left of the species today, living in captivity. It was created by the Australian duo Gillie and Marc Shattner, artists deeply committed to wildlife conservation. 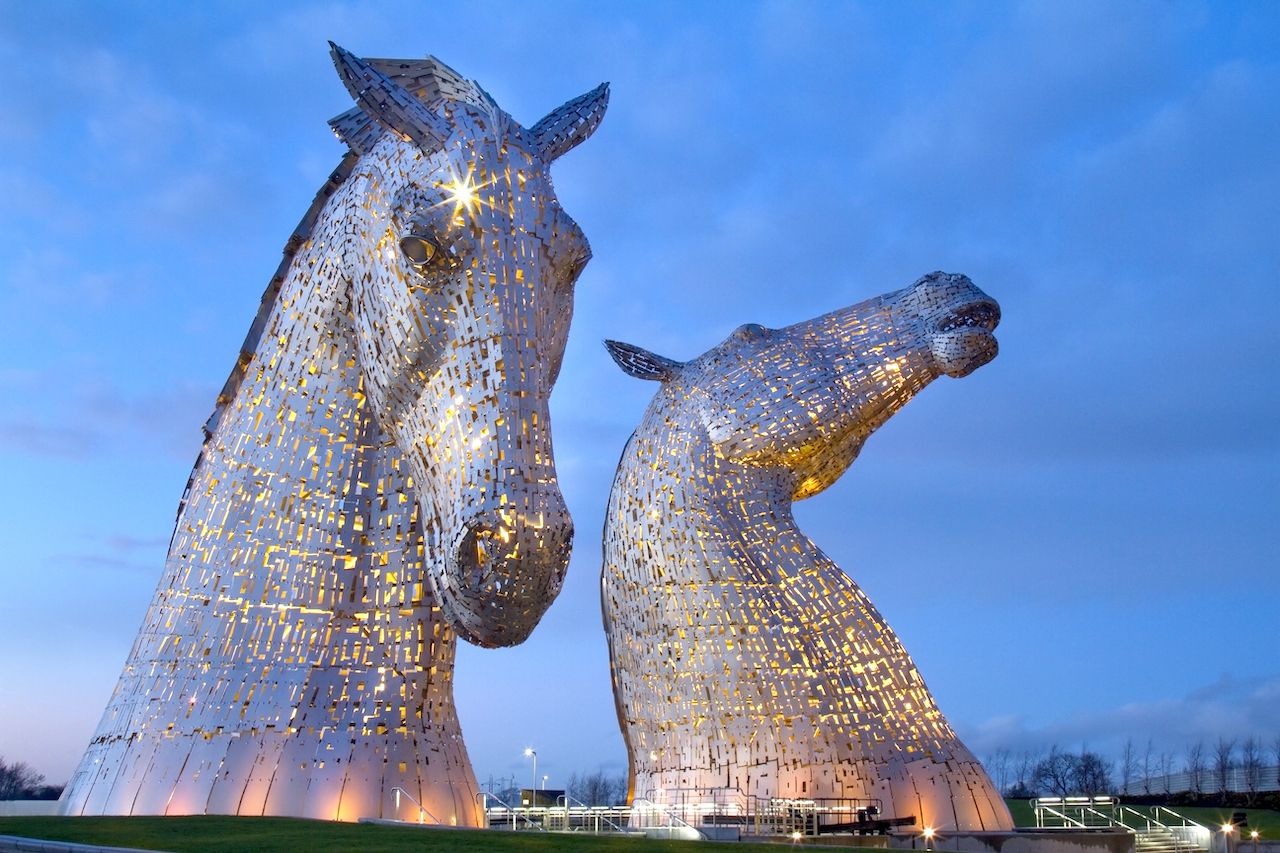 Kelpies are shape-shifting water beasts from Scottish mythology. In Falkirk, they have been transformed into 100-foot-tall horseheads, bursting out of the earth to honor the country’s long-standing horse-power tradition. The work is a part of the Helix Project, a parkland development that connects 16 communities in the Falkirk district. Built from structural and stainless steel, each monument weighs a whopping 300 tons, forming a gateway at the eastern entrance to the Clyde and Forth Canal. They’re just as beautiful at night as they are during the day, glowing from head to toe in ever-changing shades of cold, metallic white and warm yellow. 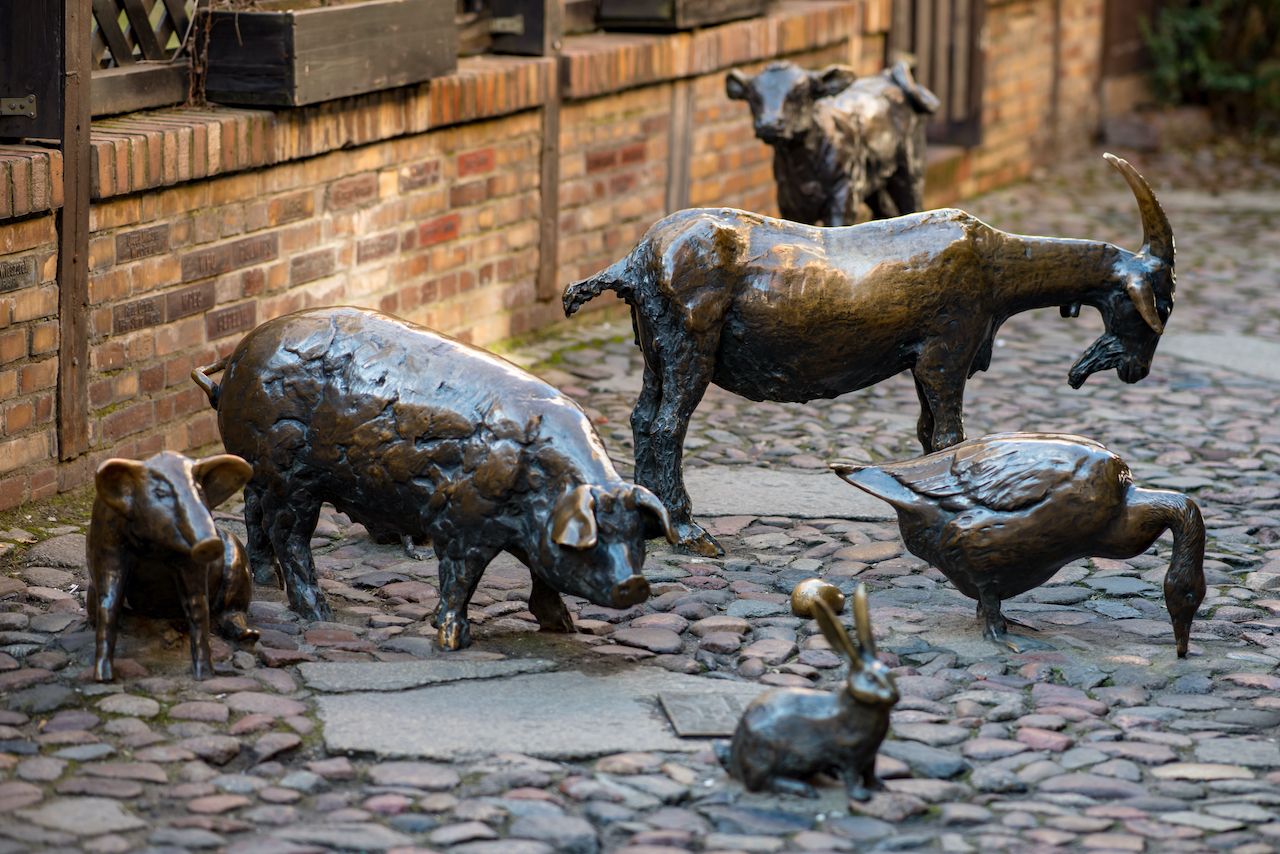 For thousands of years, animals have served both as humankind’s loyal companions and source of sustenance. In Wroclaw, Poland, a sculpture of livestock honors those that have been slaughtered to support humanity throughout history. At the dawn of the 13th century, the city had a particularly strong union of butchers, putting meat at the heart of local business and diet.

In the 18th century, however, Wroclaw “cleaned up” its streets from the bloody business of animal slaughter and transferred farms and butchers outside of the city. The bronze monument featuring a goat, a duck, two pigs, and a rabbit pays tribute to the thousands of farm animals slaughtered in the heyday of Wroclaw’s meat industry. 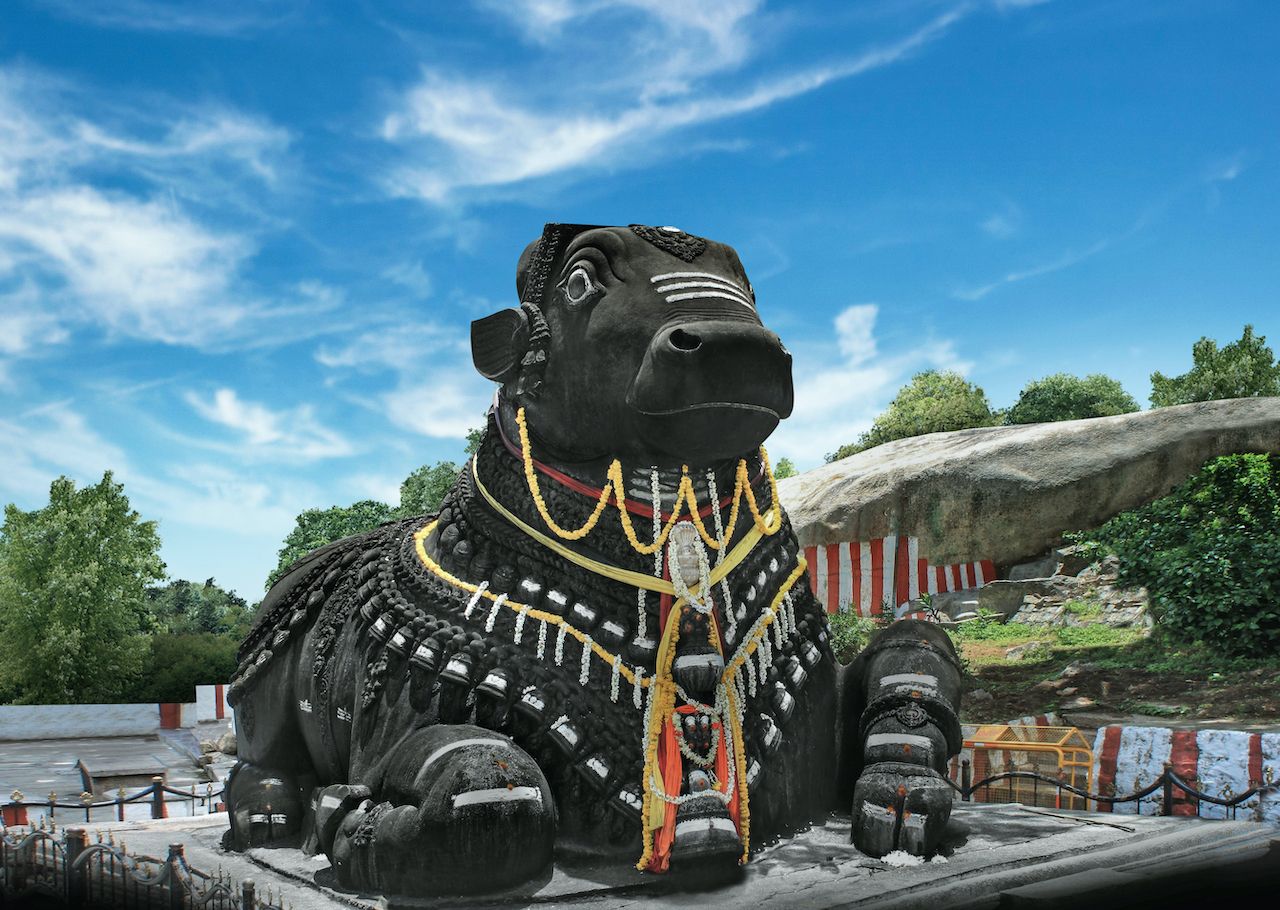 India has revered the cow for centuries. The Sri Nandi Temple in Mysore is a single piece of black granite skillfully shaped as a lying bull decorated with colorful necklaces, beads, and tassels to amplify its sacred presence. One of the top 20 attractions in the area, the temple draws thousands of visitors each year. Hinduism has a long-standing tradition of worshipping Nandi the bull, as he is believed to have been the protector of deity Shiva.

Hindu scriptures advise that devotees first present offerings to Nandi and then worship Shiva. According to the legend, if you whisper your wishes in the bull’s ears, they will reach the deity and are much more likely to be granted. Some of the suggested offerings to be made to Nandi include chickpeas, grass, and rice pudding. 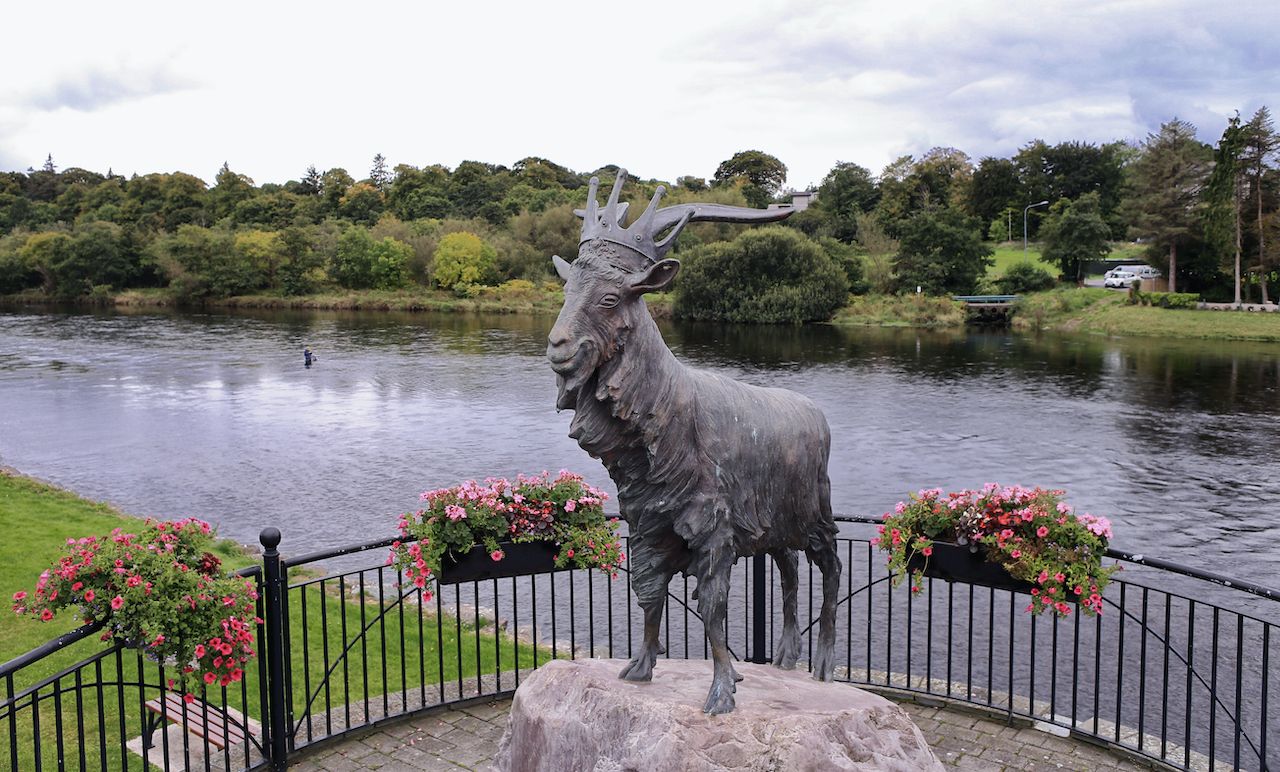 In Ireland, King Puck is more than just a farm animal. The bronze statue of a male goat standing proudly in Killorglin, Kerry, is a celebration of the country’s oldest festival — the Puck Fair — that dates all the way back to the 17th century. As legend has it, Oliver Cromwell, the fierce conqueror, was on his way to take over the town of Killorglin when his army spooked a herd of goats. One of the animals raced to the village, and upon seeing how frightened and exhausted the animal was, the townspeople sensed that something was wrong, quickly thwarting Cromwell’s plans and celebrating the goat as a hero.

During the annual festival on August 10, a male goat, also known as a puck, is captured and brought to the town square where he is crowned king by the Queen Puck — a young woman. The king is then respected as ruler of the land for three days. During the festivities, local bars are allowed to stay open extra late so that his majesty’s loyal subjects can celebrate his glory. Then, King Puck is set free and allowed to return to the wilderness. 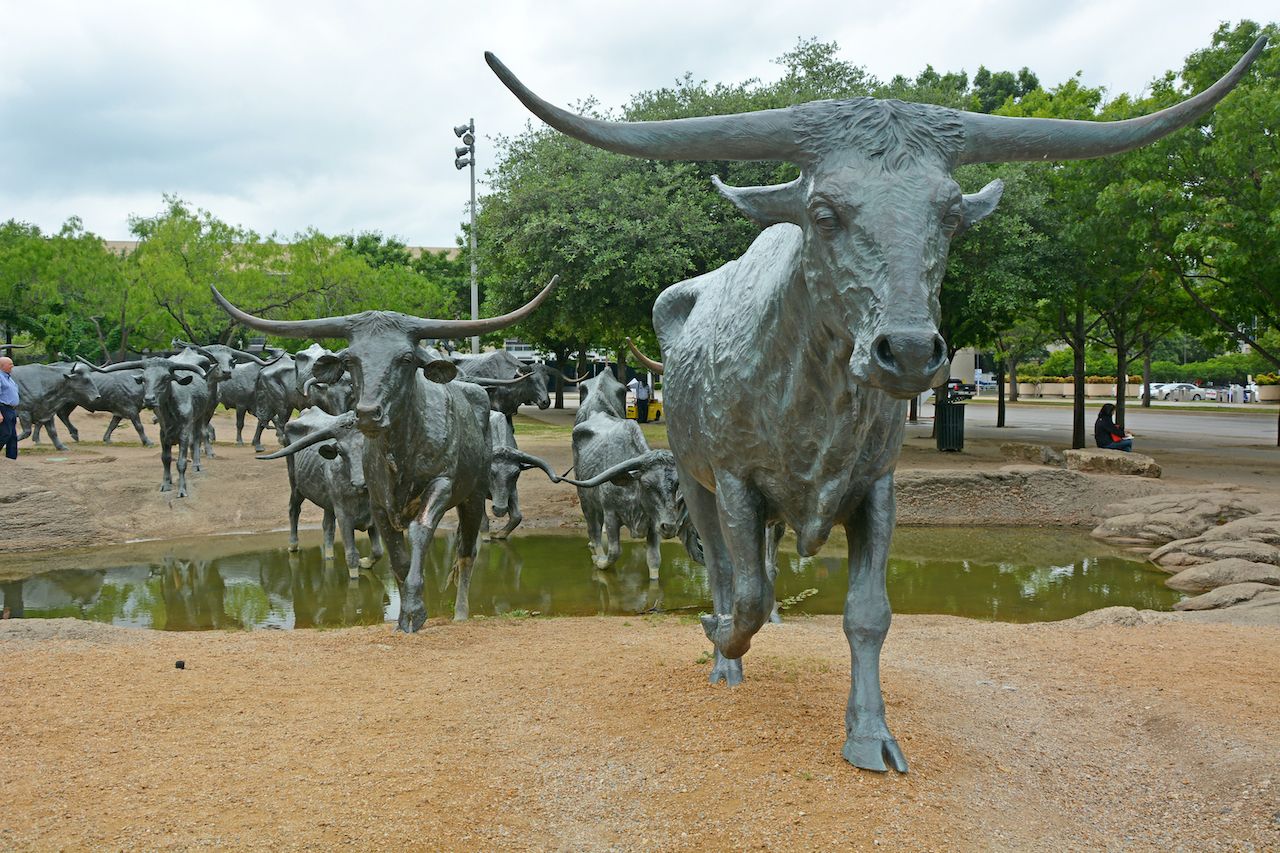 The cattle drive is a beloved Texas tradition that touches upon the state’s quintessential legacy of animal husbandry. This series of statues, created by Robert Summers, depicts the practice of cattle herding, with three bronze cowboys on horseback leading the way for 40 bronze steer frozen in motion as if crossing the prairie. It’s located in Dallas’ Pioneer Plaza, and is brought to life by a flowing stream surrounded by native plants, man-made cliffs, and a small waterfall.

NewsIndia has the largest bird sculpture in the world, and it took 10 years to build
Tagged
Art + Architecture
What did you think of this story?
Meh
Good
Awesome

Hawaiians are thrilled about Olympic surfing, but they’re not so sure about the US flag
How to make tea the Berber way
29 phrases to get you started learning Pidgin English
How ‘Twilight’ fans changed Forks, Washington, forever
Four amazing sites that lost their UNESCO World Heritage status

London is getting its first permanent LGBTQ art center