A sudsy utopia. That’s the phrase that popped into my head as I wheeled my luggage across the patio to the DogHouse Hotel and Brewery, the world’s first and only hotel located inside a brewery. I arrived on a Sunday afternoon this summer. Guests were sipping beer flights on the patio, playing cornhole and giant Jenga by the pond, and watching their canines frolic in the dog park over pints of Elvis Juice, a citrus-forward IPA that’s become a DogHouse hotel signature. At first glance it looks like the Disney World for beer fans. The Hoppiest Place on Earth, if you will: This is what you’ll find at the BrewDog hotel.

The DogHouse Hotel and Brewery is run by BrewDog, a multinational brewery and pub chain launched in Ellon, Scotland, in 2007 by James Watt and Martin Dickie. In August 2018, the brand opened BrewDog USA, the 42-acre campus in Columbus, Ohio, that’s home to the DogHouse, a BrewDog brewery, a 6,000-square-foot interactive craft beer museum, the OverWorks USA sour brewery, and DogTap, a restaurant and brewpub.

Visitors to this playground for hopheads will likely have the most fun at the DogHouse, a 32-room hotel. The BrewDog hotel is located inside the brewery, with details like a beer tap in the room and a mini-fridge in the bathroom stocked with shower beers. Yep, you heard that right.

Checking into the Doghouse Hotel and Brewery

Check-in here isn’t like at any other hotel. Along with my room key came my choice of a welcome beer from the taps — or chilled cans — behind the bar. While the desk clerk/bartender checked me in to the BrewDog hotel, I enjoyed a can of Grapefruit Pay Citrus Saison while pondering the meaning of the pink neon sign on the back wall, on which “Hotel California” was crossed off to read “Welcome to the DogHouse.”

When I stepped out of the elevator onto my floor I was overcome with one of the best aromas around: the unmistakable smell of beer fermenting, an intoxicating mélange of cereal grains and yeast. The hallways, along with two Brewmasters’ Suites, look out onto Overworks’ fermentation tanks and barrel area. (The suites come equipped with blinds and garage doors for a bit more privacy when the brewery staff is moving barrels or checking on the progress of a batch of wort. This is, after all, a working brewery.) 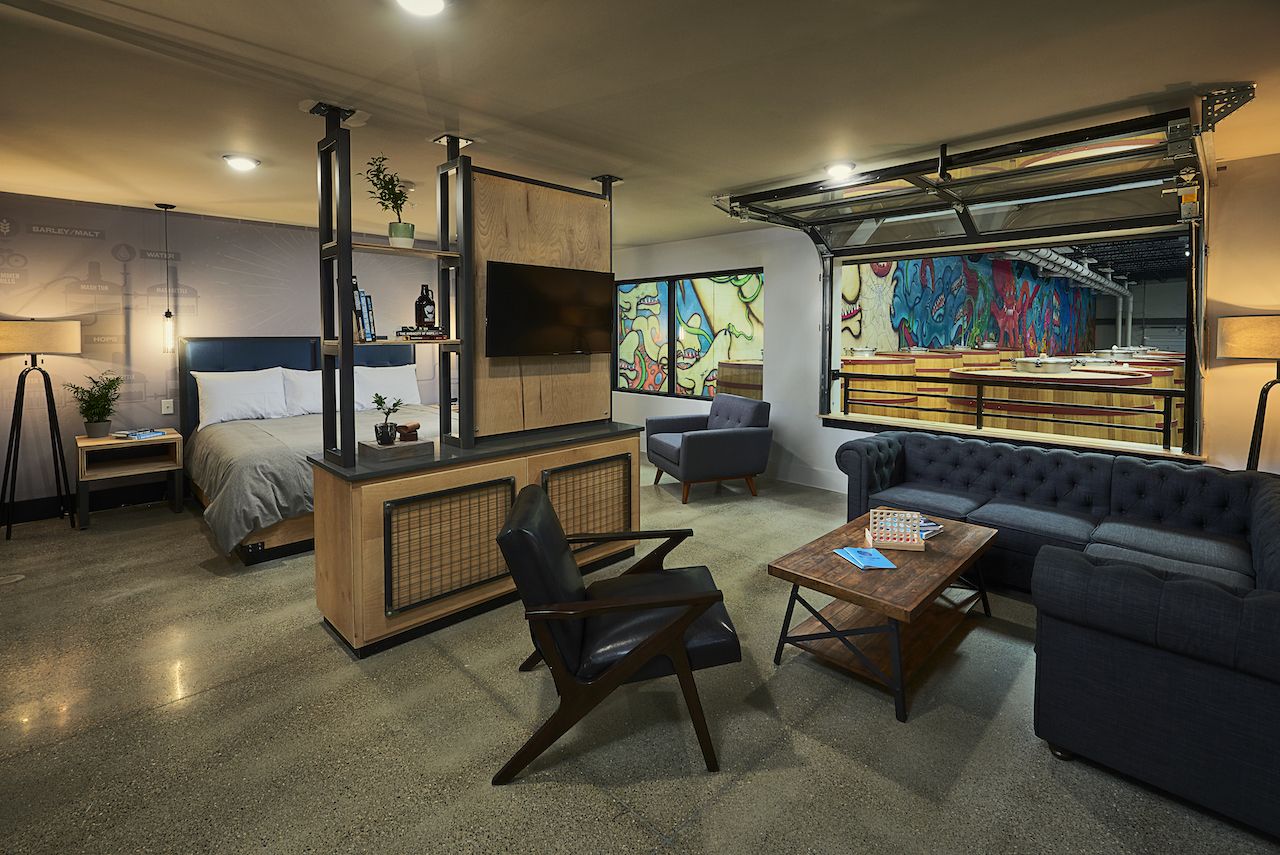 Rooms at the Doghouse Hotel

Each room at the BrewDog hotel is named for one of BrewDog’s creations, and, yes, a few are dog-friendly. Mine was an homage to their bittersweet stout Cocoa Psycho, with purple, blue, and gray neutral accents reflecting the color scheme on the label. But nevermind the design. Most guests are here for the beer. My room came equipped with the “World’s Best Minibar” (according to a sign on the door), stocked with eight of the most popular brews, alongside a tap that could be filled with four or five servings of my favorite BrewDog suds. 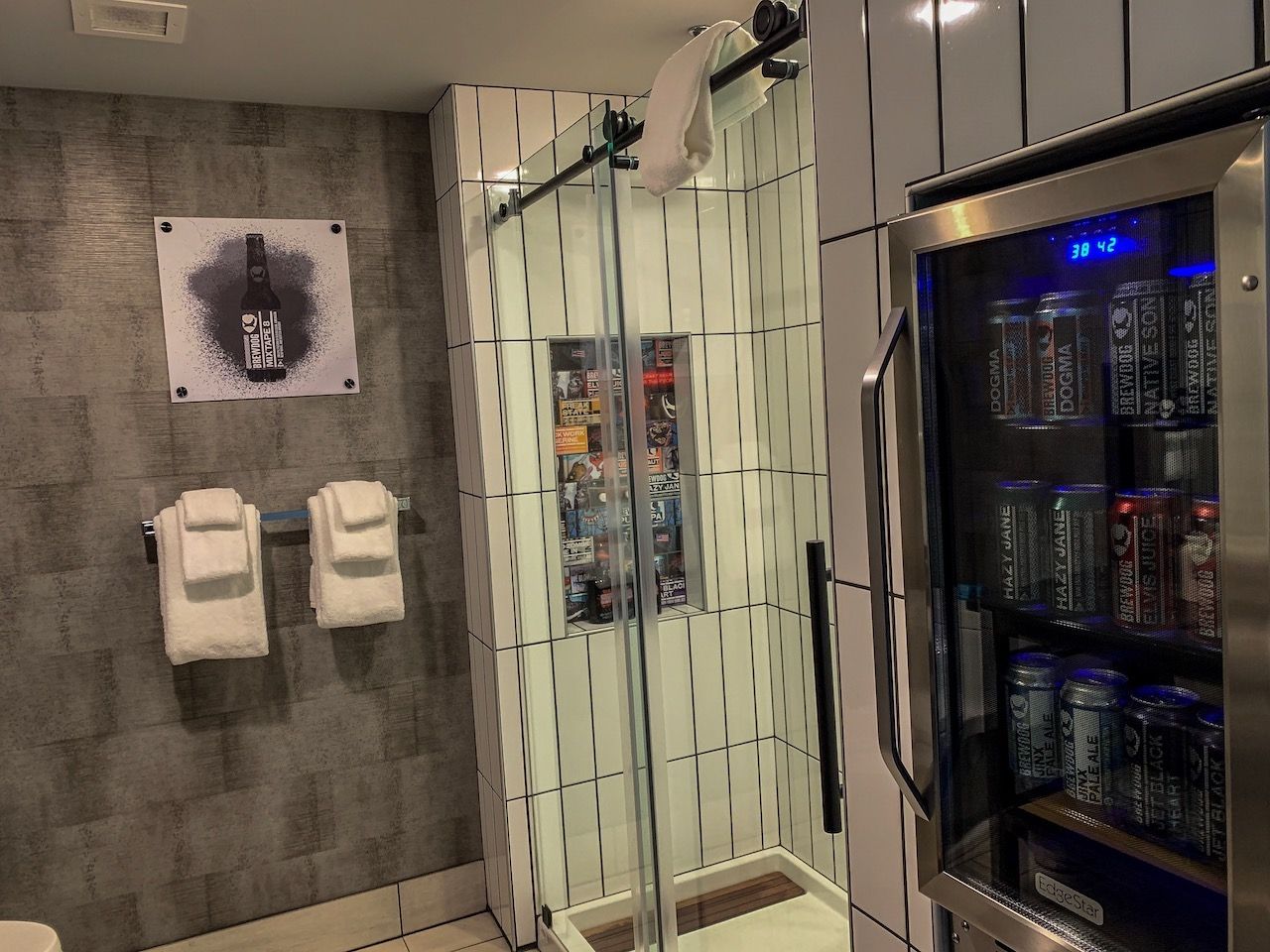 At the DogHouse hotel, the real party is in the bathroom. Ceramic bottles of full-sized toiletries are infused with grapefruit (an ingredient also prominent in the aforementioned Elvis Juice). Another fridge is stocked with shower beers, complete with a koozie velcroed to the mirror to keep your can cold even with all of that steam. While management wanted to install the fridges directly inside the shower, the health department had a little problem with the concept of beverages potentially being splashed with water and bodily fluids. Killjoys.

After settling in and popping the top on another beer, I headed back downstairs to check out the rest of the BrewDog hotel, starting with the beer museum. It explains the history of BrewDog and covers the ins and outs of the beer-making process, and a giant map on the floor shows where different styles originated. I learned that the company selected Columbus for its United States headquarters because of the city’s great local beer scene, water quality, and because it’s a growing metropolis — more than 40 percent of the US population lives within a 500-mile radius.

Strolling around, I perused displays on the rise of IPAs and how to really taste beer. I smelled jars of different varieties of hops and the aromas and flavors each adds. Mosaic hops, for instance, are used to impart an earthy, floral, and fruity aroma, while Cascade hops give grapefruit, floral, and spicy notes. I could see, smell, and chew on one of six varieties of malt, from spicy and dry rye to rolled oats that lend a thick and smooth feel. An insightful section shared tips and best practices for the budding home brewer while pairing suggestions proved that beer can partner with cuisine as deftly as any wine. Not convinced? Try a sweet caramel brown ale with roasted pork or a bitter IPA to cut through the richness of fried chicken wings, one plaque explained. 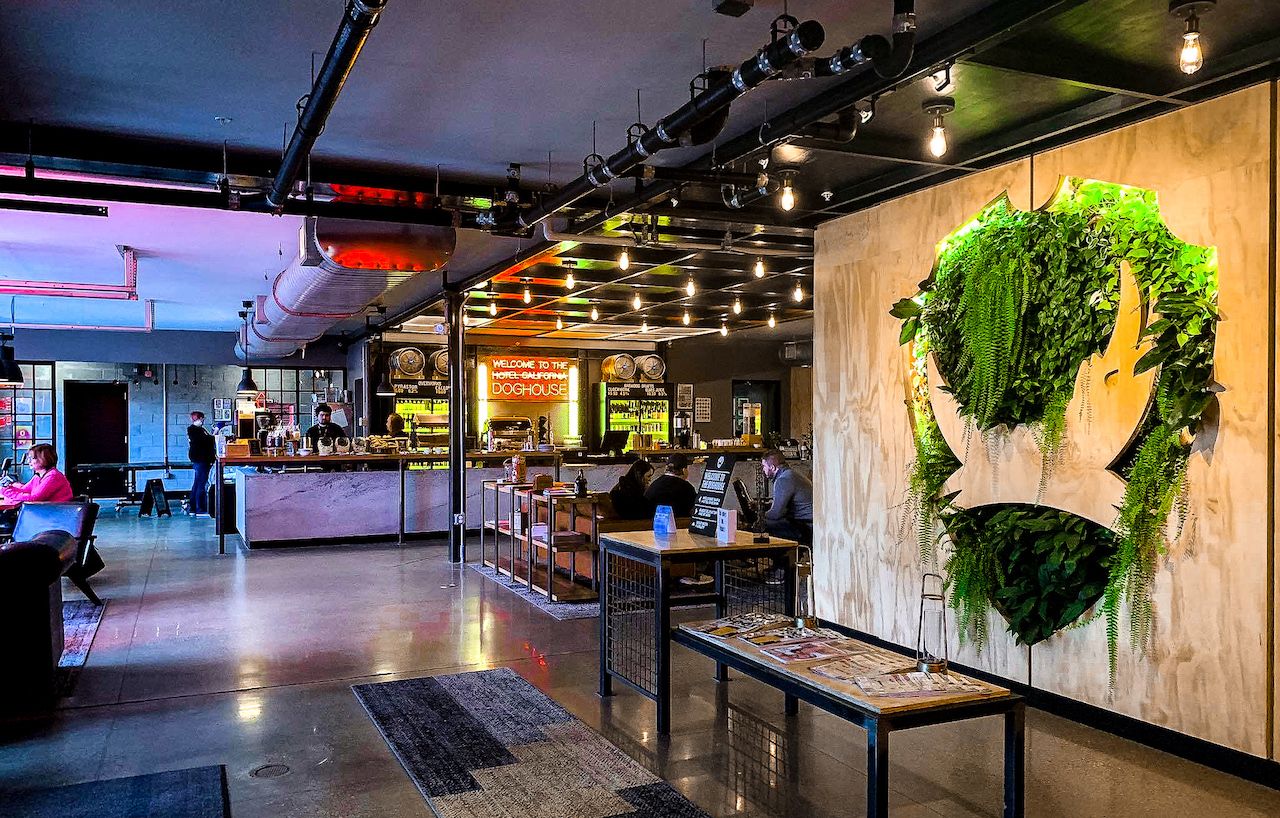 As immersive as this museum was, it didn’t beat tasting the final product. Luckily, right next door you’ll find the DogTap, a massive indoor and outdoor restaurant and pub that also includes a gift shop and game room with video games, pinball machines, and shuffleboard tables. At the Doghouse restaurant, rotating house taps are joined by local guest taps, and if you don’t like or aren’t in the mood for beer, there is a selection of wine and a full cocktail bar.

Try the DT&T, which is a play on the Gin & Tonic with hopped grapefruit bitters and a syrup made with (what else?) cooked-down beer. Popular menu items include chicken or cauliflower “wings” coated in traditional hot or honey adobo sauce; tacos stuffed with carnitas, fish, or brisket; spicy shrimp boil with corn and potatoes; and a superfood salad with beer vinaigrette. BrewDog will foot the bill for any employee who wants to attain cicerone certification, so the staff is well-versed in which pours go best with your mood, the time of day, and your order. At lunch one day, my server steered me toward Clockwork Tangerine, a low ABV session ale perfect for day drinking. It was spot on.

If you’re a beer geek craving even more immersion, you can book a guided beer tasting, beer and cheese pairing class, or a brewery tour that ends with a cold one. Despite all BrewDog has to offer though, it wasn’t surprising to learn when I was there that a decent percentage of guests check in and pretty much hole up in their rooms during their entire stay, except for meals.

By the next morning I assumed I might need a little break from barley, malt, and hops. That is, until I spotted a most tempting chalkboard sign at the included breakfast spread offering up two varieties of Beermosas. Turns out beer is the perfect way to start the day.

NewsBrewDog Is Launching a Craft-Beer-Themed Flight
Tagged
Beer Epic Stays Ohio, United States
What did you think of this story?
Meh
Good
Awesome

Every Roller Coaster at Cedar Point, Ranked
7 Idyllic Destinations for a Family-Friendly Thanksgiving Vacation This November

Ladies, Lighten Up: Cleveland Belongs Right Up There With Any Bachelor Destination