When more than a few professional skiers, snowboarders, racers, Nordic combined-ers, and other cold-weather pros gather in one place, it’s called the Olympics. In Steamboat Springs, it’s simply another Tuesday. Here in north-central Colorado, where the ranching lifestyle of the Old West still thrives and agricultural land encircles a collection of small mountain towns, is where future stars come to hone their craft. Steamboat Springs is the region’s isolated hub.

The town is a three-hour drive from Denver. Winter commutes tend to be slightly longer as you must drive over the frequently storm-covered Rabbit Ears Pass, making it an ideal place to settle in for a while. Once here, its separation from the I-70 gridlock further south is just one of Steamboat Springs’ greatest perks. Downtown is full of cultural and culinary highlights, and its ski history is renowned. Here’s how to take it in on a winter trip, both après-ski and on a day off the slopes. 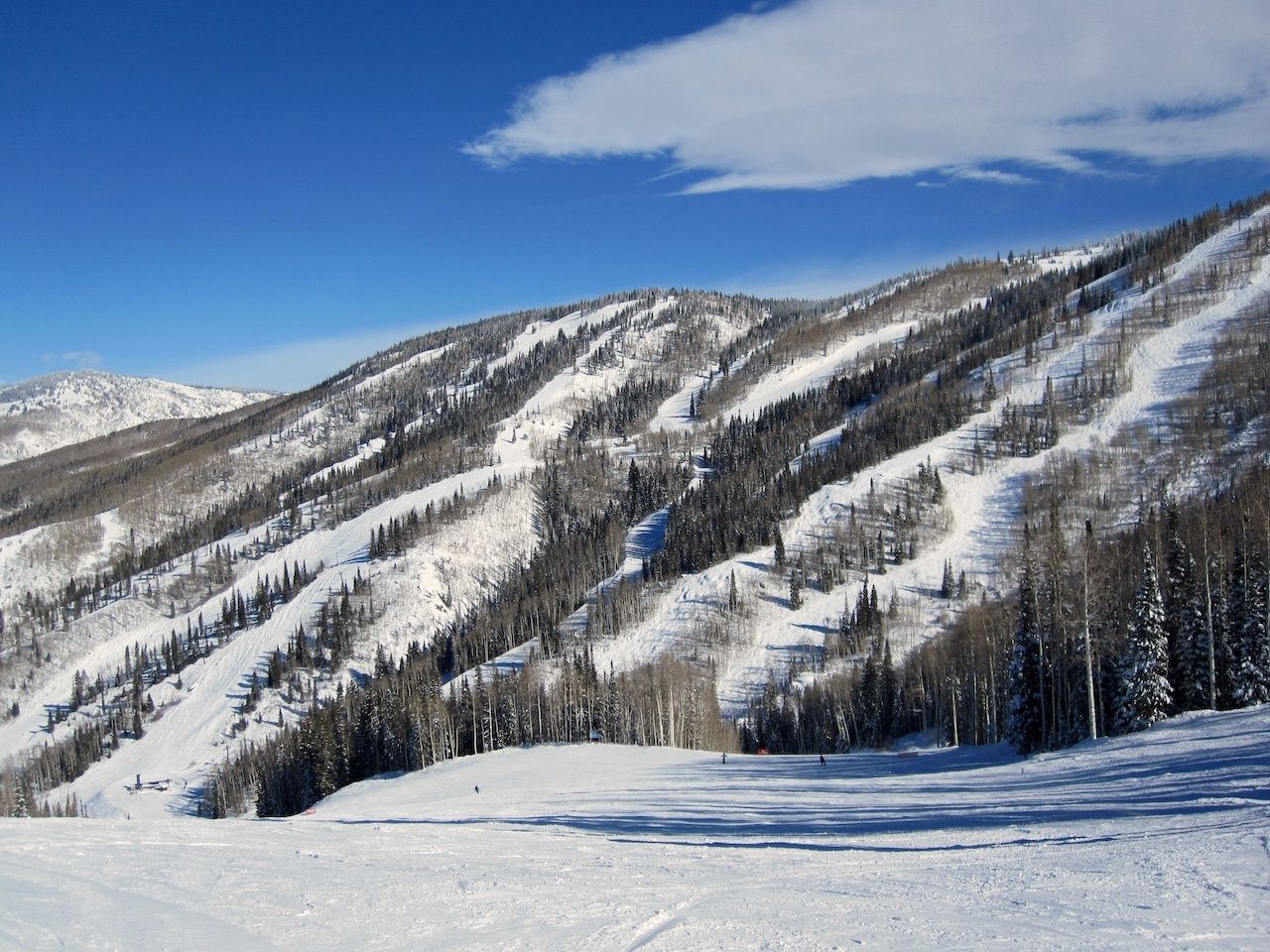 A record 98 Olympians have called Steamboat Springs home, including mega-stars of the winter sports world past and present like Buddy Werner, Billy Kidd, and Todd Lodwick. The town sent 15 athletes to the 2018 Winter Games in PyeongChang, South Korea, more than many countries.

Steamboat’s Olympic heritage stems from its legendary ski hill and winter training facilities that have attracted top-notch athletes since the mid-1900s. That hill is not the Steamboat Resort — though this iconic ski area is a destination in itself — but an older, smaller, ski area called Howelsen Hill. With its first ski jump opened more than a century ago, Howelsen Hill has been in continuous operation longer than any other ski area in North America.

Today, it’s also home to one of the few full-scale ski jumping venues in the state and the largest in the country. Norwegian ski jumper Carl Howelsen founded the ski hill in 1915, bringing with him a Scandinavian’s taste for both Nordic and alpine skiing and giving the United States its first true taste of ski culture. In the ensuing decades, training facilities for ski jumping, racing, nordic combined, and other winter sports have popped up on and around Howelsen.

You can access Howelsen Hill’s lift-operated skiing from downtown Steamboat Springs and experience this history yourself. Ski Howelsen Hill from late November through April from 11:00 AM to 8:00 PM. The best local hack is to make a reservation to ski on Sundays, when lift tickets are free. We don’t recommend hucking yourself off of the massive ski jumps without proper training and permissions, but if you happen to catch athletes on training day, it makes for quite a show from the base area — whether or not you’re skiing yourself. 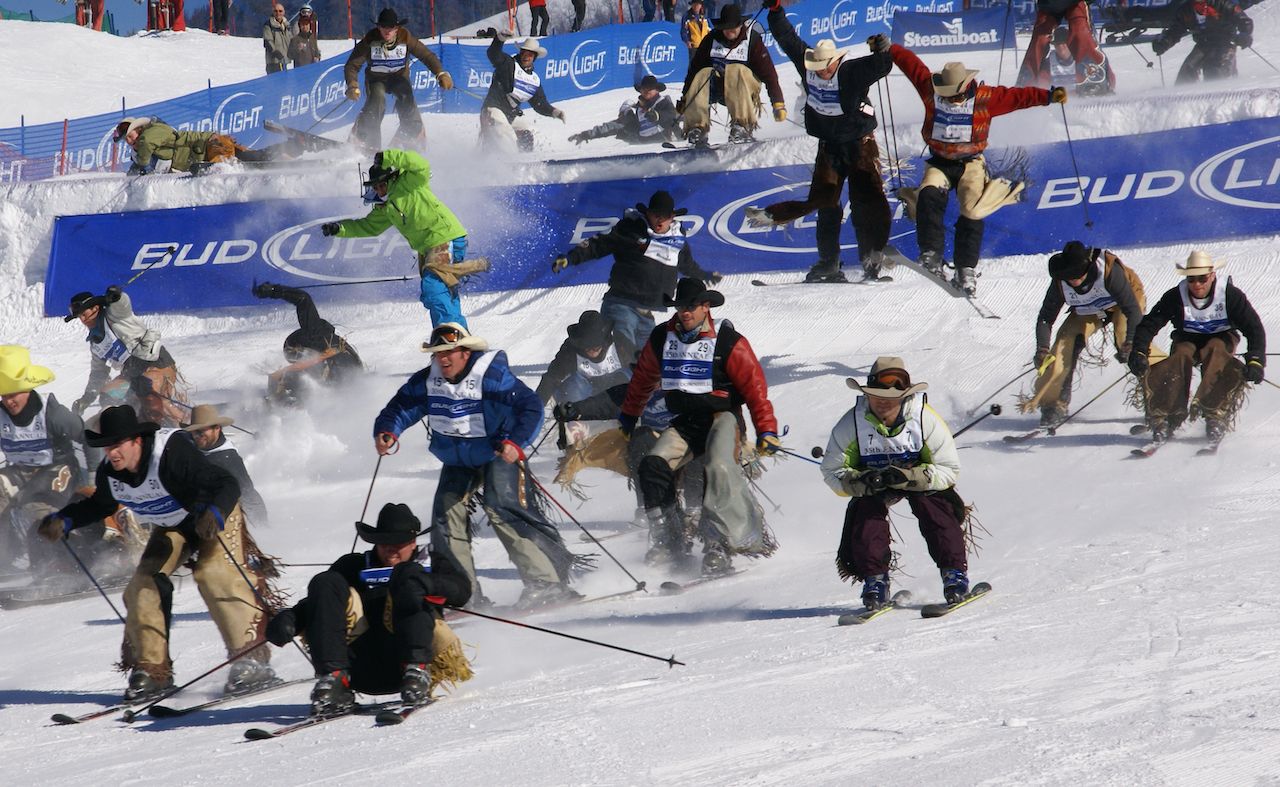 Beyond watching ski jumpers in training, the most popular show in Steamboat is the annual Cowboy Downhill, open to members of the Professional Rodeo Cowboys Association or Professional Bull Riders. They ski in a chaotic downhill challenge, dressed to the nines in their Western garb, in an event that is basically a rodeo on the slopes. There are crashes, outlandish style, and loads of whooping and hollering. Thing is, you have to be in town in January to catch it.

It doesn’t need to be January, though, to see the bust of Buddy Werner at Steamboat Resort. Werner’s story is well-known in the ski world — but in Colorado, and particularly in Steamboat Springs, he is a legend. Werner and his family learned to ski at Howelsen Hill and he competed in the Olympics as a ski racer in 1956 alongside his sister, Skeeter. His family is credited with popularizing skiing and racing in the Rockies, and Werner won numerous awards including being the first non-European to win the Hahnenkamm ski race in Austria. Sadly, he was killed in an avalanche near St. Moritz, Switzerland, in 1964 at age 28. You’ll find the commemorative bust located near the top of the gondola at Buddy’s Run on the aptly named Mount Werner. A long-standing tradition is to toss a handful of snow on Buddy’s face as you ski past — so don’t mistake the locals’ admiration for hostility.

Learn more about Steamboat Springs’ ski culture at the Tread of Pioneers Museum, which features a Ski Town USA exhibit. Here you’ll find artifacts and stories on the history of skiing in the area beginning with Carl Howelsen and continuing to today, along with quirky aspects like the history of ski fashion and how the town’s iconic Winter Carnival came to be.

You can get on the big mountain even as a non-skier. 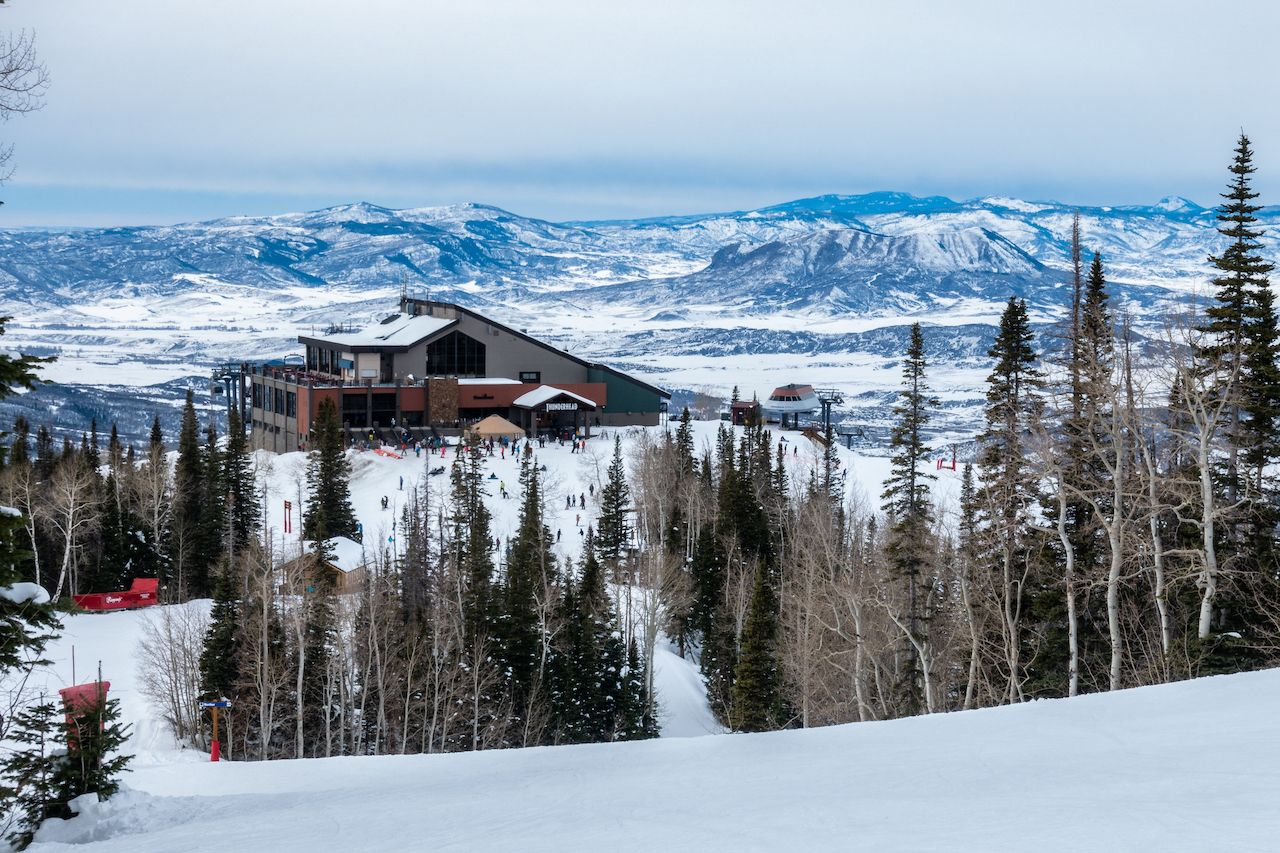 A unique aspect of Steamboat, the nearly 3,000-acre behemoth of a ski area that extends from the east end of town to the peaks beyond, is that you can ride the gondola to have happy hour on the mountain sans-ski, if you want to. Thunderhead Lodge, which serves as the upper terminus of Steamboat Resort’s gondola, hosts Thursday afternoon “gondola happy hour” sessions on the deck in both winter and summer. The drinks and vibes themselves are enjoyable, but the real perk of doing this is the sunset view to the west, over the Yampa Valley and across the surrounding Rockies. Steamboat Springs is known as the “snowglobe” of Colorado, and this is the best way to find out why.

At Ski Time Square, locals and visitors gather at Slopeside Grill for pub food and beer beginning in the early afternoons. A short hike uphill from Slopeside is the T-Bar, as close to a Euro-style après-ski vibe as you’ll find this side of the Atlantic. Grab a chair outside, watch the skiers fly by, and maybe dance on your seat to 1990s rock, hip hop, and dance classics.

The town is a hotbed for culinary innovation. 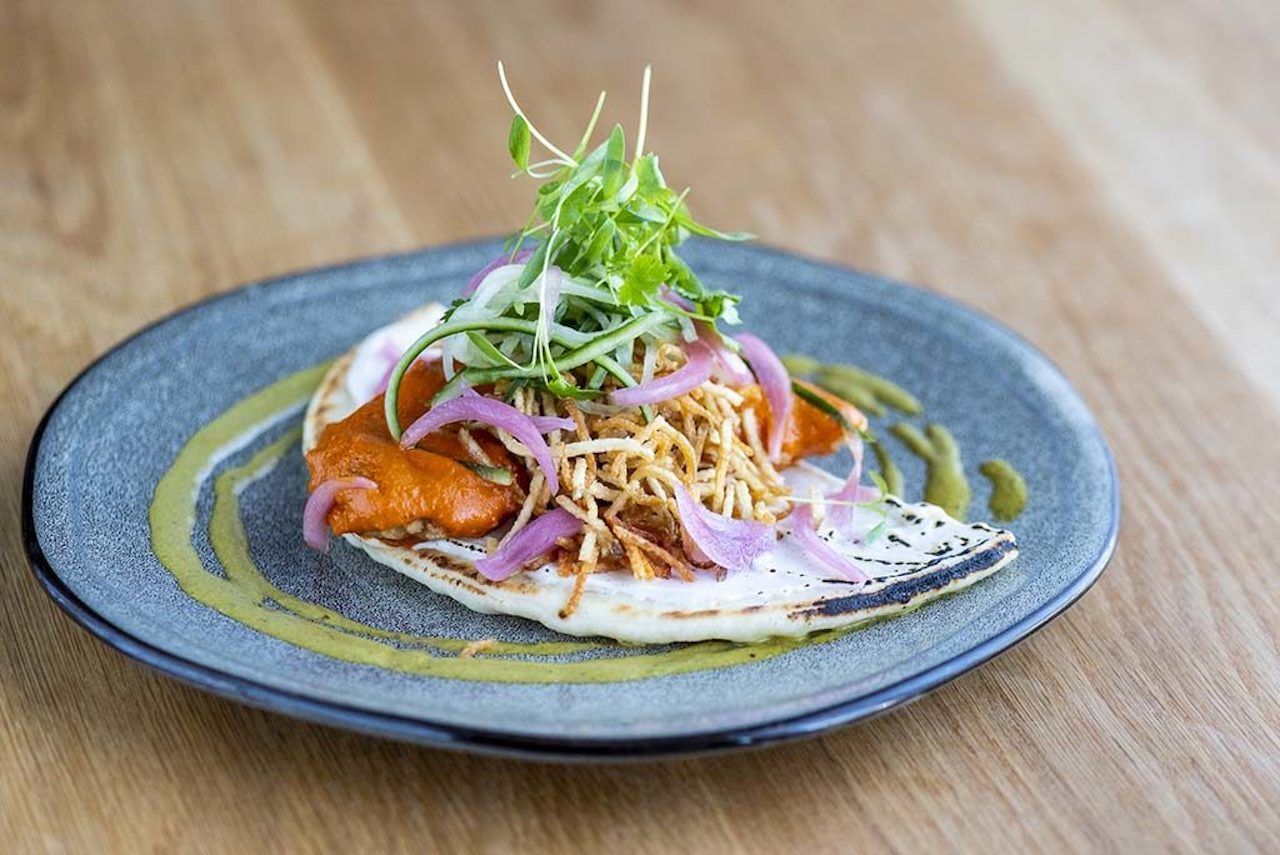 Well-known outdoor brands including Big Agnes, HoneyStinger, and SmartWool were founded in Steamboat Springs, establishing the town as a hub for adventure entrepreneurship. That pioneer spirit manifests itself in local dining rooms as well, where veggies and meats produced in the surrounding valleys are commonplace in dishes that upend the tired ski town menus of chili cheese fries, burgers, and fried chicken. In particular, two buzzy eateries have become emblematic of the town’s culinary progression, and they so happen to bookend the downtown dining corridor.

On the south end, the menu at Table 79 is at once both Western and modern, a convenient nod to its Colorado roots. On the menu are mountain town standards like beef short ribs and wild game, but you’ll also find vegetarian dishes with an equal punch, like a spaghetti squash “Bolognese” made with seitan rather than meat. And it’s not only the food that makes this restaurant a forward-thinker. Its business model incorporates a three percent surcharge on all dining orders, in order to provide what it calls “a more sustainable compensation model” for its kitchen staff. The fee is meant to help address common issues plaguing Colorado’s ski towns, as busy winter and summer seasons shift to shoulder seasons that often find service industry workers facing reduced hours. Year-round, many resort and service industry workers struggle to afford to live in ski towns where rental rates tend to fall victim to the price-gouging “Airbnb effect” and a high barrier to entry to own property.

Across downtown, Laundry Kitchen & Cocktails brings a more international flare to a former laundromat (hence the name). Plates are built for sharing, tapas-style, like the Ojibwe rice pilaf and the chili-braised bison. The spot is all about the hip atmosphere that could be saying, “It may only be 6:30 but I’m two Mules deep and feeling groovy.” Those same athletes that you watched ripping down the mountain in the morning can be found lingering over cocktails at the bar here, warming up for a night along Lincoln Ave. Up the road, Schmiggity’s brings in local and touring bands and is a popular meeting spot for after-dinner drinks and dancing. In the grand tradition of ski towns, Steamboat Springs tends to turn in by midnight in favor of catching first tracks in the morning. If you do want to hit last call, head to Sunpie’s on Yampa Street.

Test your comfort level at the hot springs and crash in comfort. 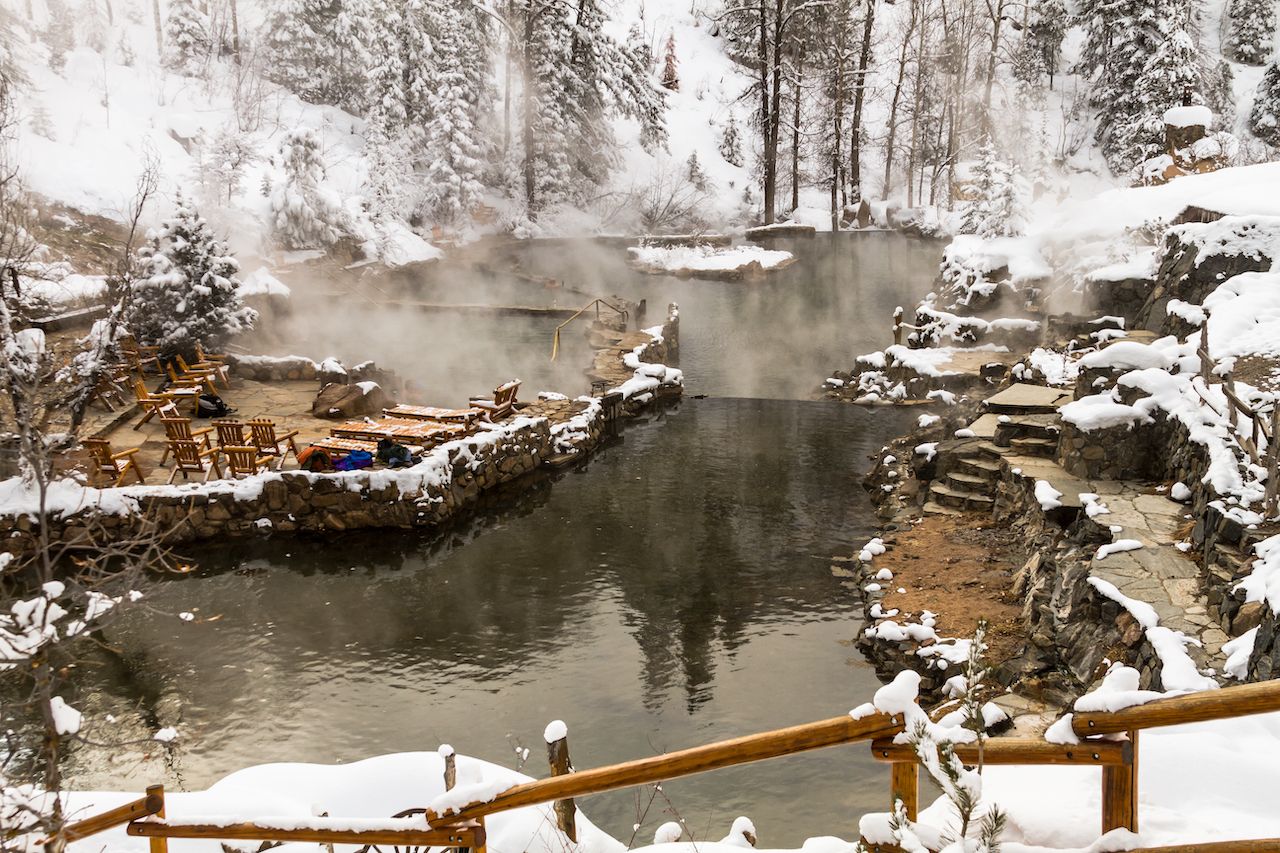 Strawberry Park Hot Springs is an anomaly among soaking baths in the Rockies. It’s well maintained and has on-site lodging and camping, something not so uncommon around the state. But what makes this hot springs resort, atop a winding dirt road blanketed by champagne snow, unique is what you’ll find after dark. Or rather, what you won’t find: clothes. Strawberry Park is “clothing optional” at night, and many soakers take the opportunity to don their birthday suit while they relax in the sulfur springs. It’s not required that you go nude, but if you’re comfortable with the idea, go with it — it’s dark out and the atmosphere is mellow. Plus, you already ascended the treacherous road to get there. The worst is behind you, and at this point even the hesitant tend to find that they get more from the experience when their inhibitions are left in the locker room alongside their trousers.

You can stay in a cabin on site, but if you prefer to stay in town, check into the Nordic Lodge, an appropriate ode to the town’s Olympic history and rustic mountain town culture, located right downtown. Rooms start at about $128. Or, for chic and modern, book a room at the Ptarmigan Inn, with a minimalist ski-centric aesthetic and on-site lounge, for about $282 per night.