The tale of how humans discovered cod begins a thousand years ago in the North Atlantic Ocean, where the warm current of the Gulf Stream brushes the northern currents, creating a nutrient-rich environment teeming with life. It is the tale of a species whose fecundity and resilience populated an ocean with fish that grew to be six-feet long and weigh two hundred pounds: the Atlantic cod, Gadus morhua, the common fish.

The Basque cloaked the cod in mysticism: It fed Europeans voyaging to foreign lands and the first English settlers in America; it provided sustenance to slaves on sugar plantations while enriching New England merchants. This is the tale of a fish whose spawning grounds, limited to the North Atlantic Ocean, yielded a product with global reach. From the barren coast of Newfoundland to the humid islands of the Caribbean to the lava fields of Iceland, this is the tale of cod told through seven recipes. 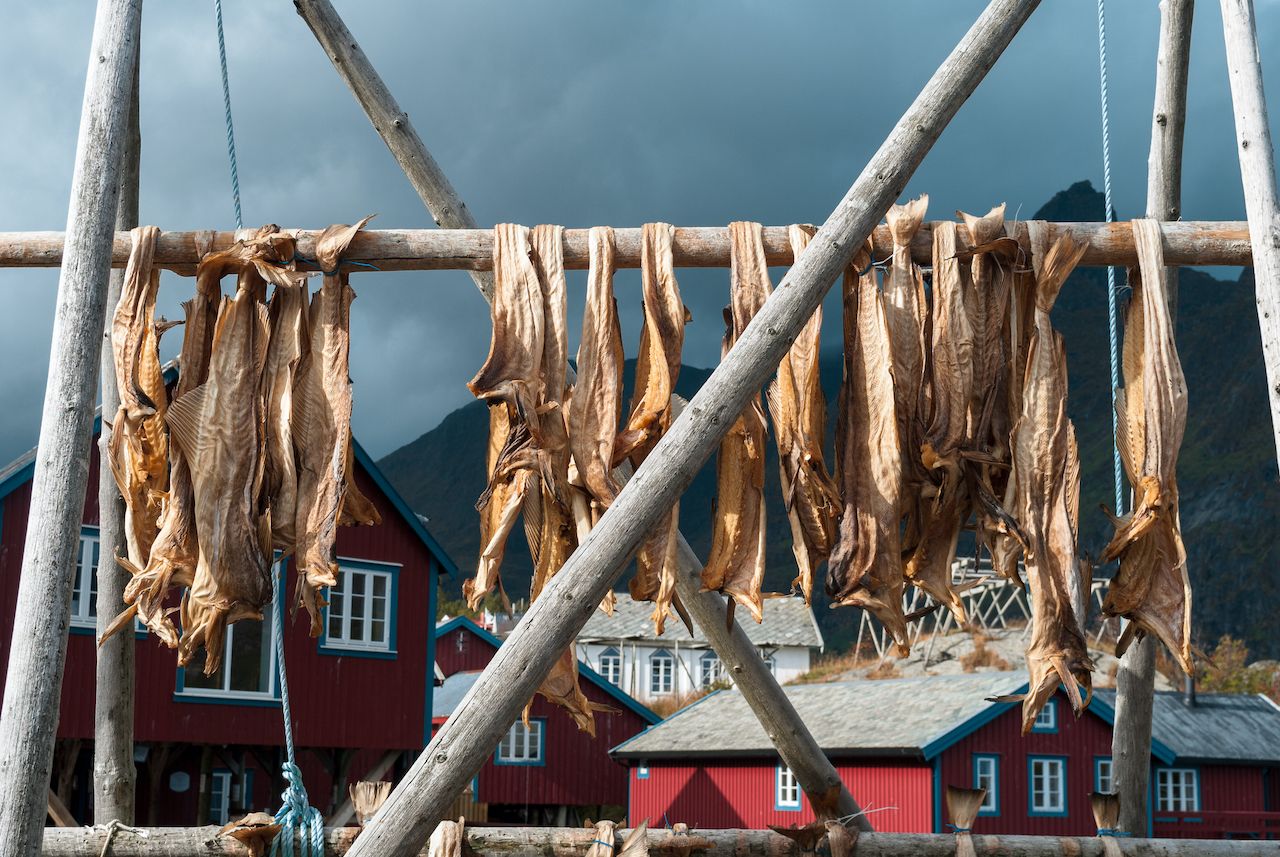 Centuries before the Middle Ages, the Vikings traveled the edge of warm ocean currents meeting colder ones from Norway to Iceland to Greenland to Canada, where conflicting currents stirred up nutrients that fed cod, the fish they harvested.

The Vikings tied codfish in pairs over poles and left them out to dry until they lost four-fifths of their weight in the bitter winter air, turning into a hard plank called stockfish. Vikings chewed on stockfish during their long journeys to a place called Stoneland, which speculated to be the Labrador coast in Canada and is known for its rocky and barren coast — perfect for drying cod into stockfish.

But Viking explorers were not the only fishers to follow the path of cod from Europe to the coasts of Canada. Basque fishers had their own secrets and Catholic devotees to feed. 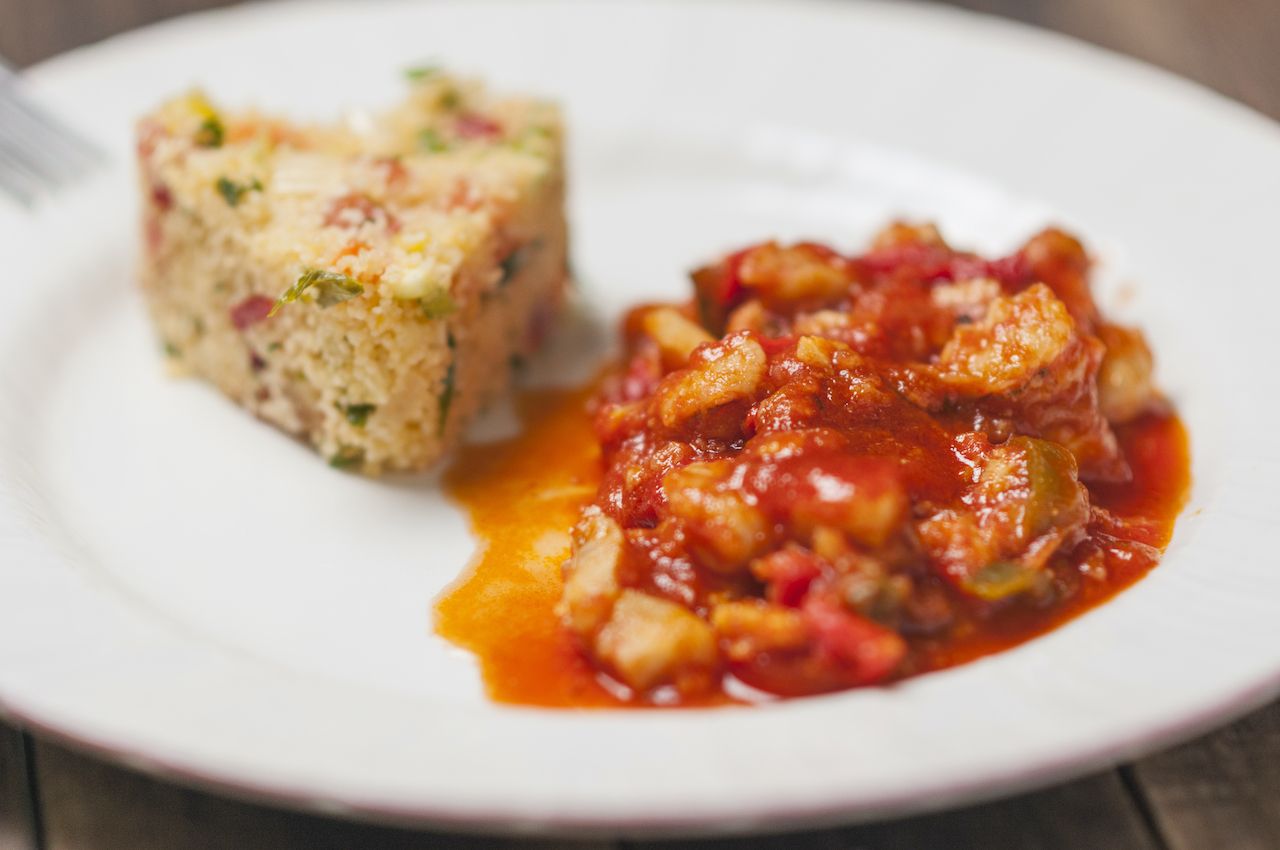 Bacalao a la vizcaina is an elegant Basque dish where a thick filet of flakey Atlantic cod is blanketed in a red sauce made with choricero, a pepper native to northern Spain.

While bacalao a la vizcaina became popular in the 19th century, Basque fishers had a long and mysterious history with cod. Much of Europe wondered where they were voyaging to find Atlantic Cod, which do not inhabit Spanish waters. Scandinavians who fished cod in the North Sea and British who fished cod offshore since Roman times had no record of Basque fishing fleets, yet the Basque were returning to Spain with preserved cod.

The Basque discovered they could use salt to preserve the fish, giving it a longer shelf life than stockfish. Basque merchants forged strong economic ties with Mediterranean countries where Catholic populations favored the durability and flavor of salted cod over stockfish. The medieval church enforced lean days where only foods deemed cold could be consumed — cod, a cold food, quickly replaced whale meat as the quintessential dish for Fridays and sacred days.

While the Basque were accruing wealth with each Catholic holiday, cod was becoming a widely sought-after commodity, and stories of the land across the ocean began to spread. By the 15th century, British explorers were following the Basque beyond the coast of Greenland to the coast of Newfoundland. 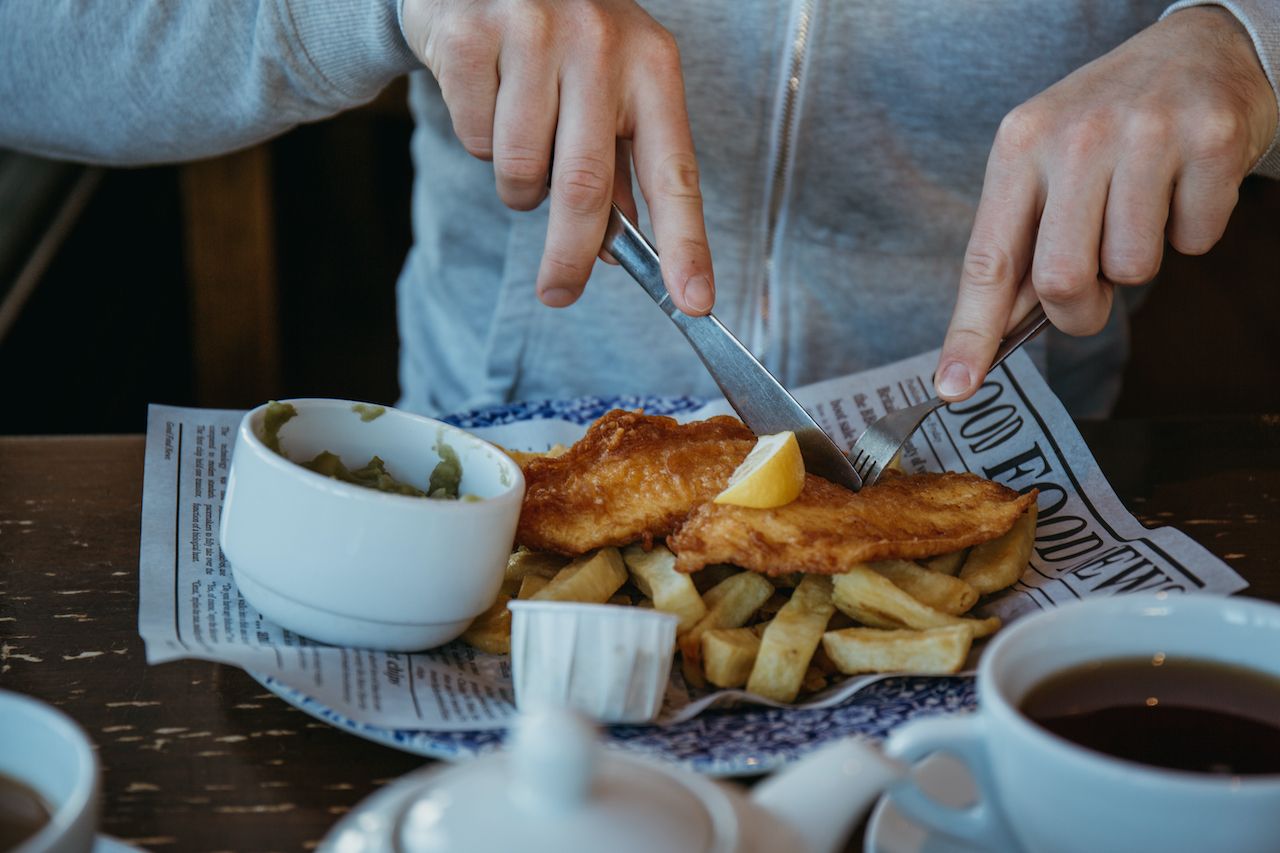 The London fried fish trade began in the 1830s with Jewish merchants in the East End battering and frying the cheapest fish on the market, which at the time were Atlantic cod.

But before fish and chips became a staple dish among the English working class, the British empire claimed the rocky coast of Newfoundland in 1497 for drying cod. Preserved cod from Newfoundland became the primary provision on British fleets setting out to “discover” a world that would double in size over the 16th century.

While explorers chased after myths of gilded cities in South America, English pilgrims requested a land grant from the government to settle in Plymouth. There, they pursued the profitable activity of fishing for cod in a bay that was said to churn with shoals of cod: Cape Cod Bay. 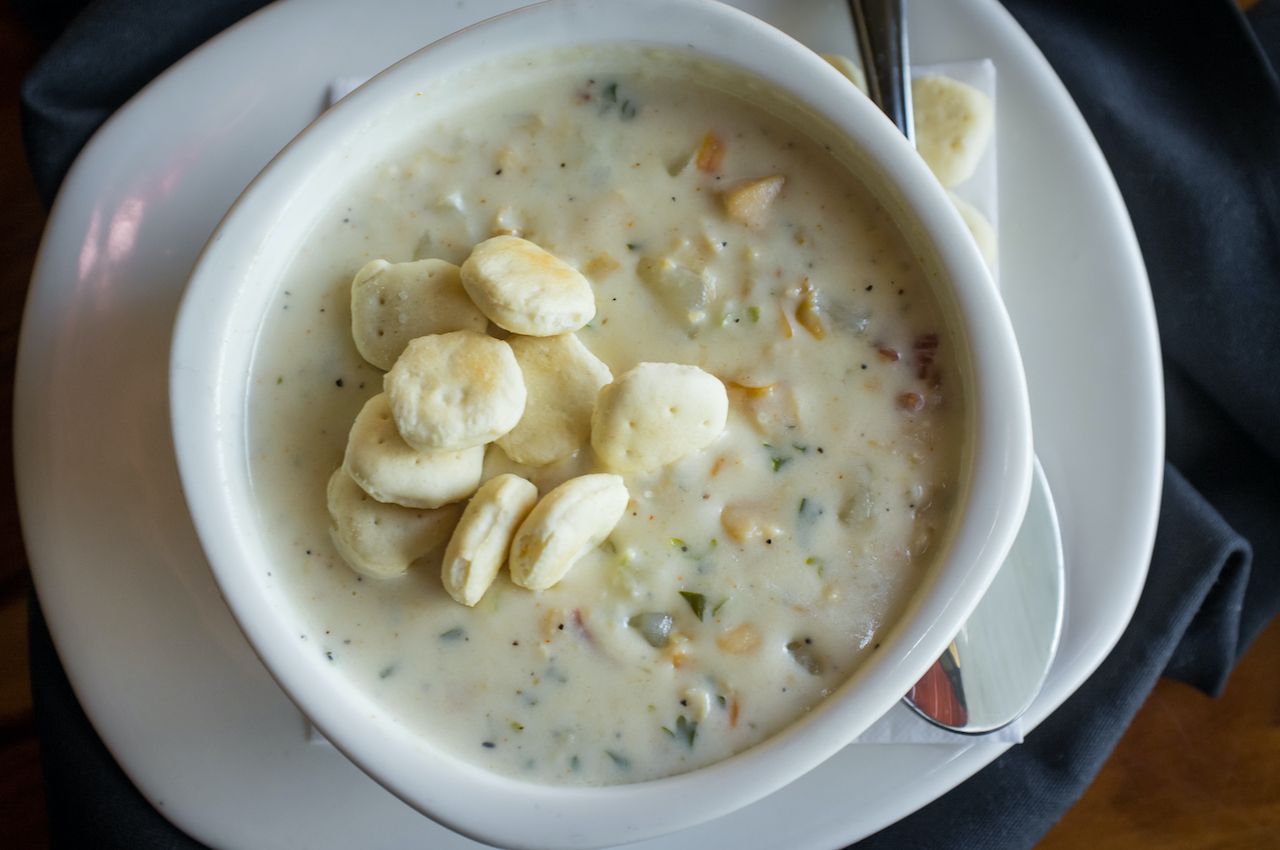 French and English people fishing off the grand banks of Newfoundland and the coasts of New England likely invented chowder, which in its earliest iteration involved layering salted pork with sea biscuits and salted cod in a pot. It could be made with the standard equipment on a fishing vessel. It wasn’t until the 19th century that chowder became a fashionable meal among the cod aristocracy in New England who had grown wealthy from trading the fish with Spain and plantation owners in the Caribbean.

In 1640, only 20 years after settling Plymouth, the Massachusetts Bay Colony was catching more than 300,000 cod and trading it for salt with Spain. New England fishers adopted the Basque technique of preserving cod with salt, giving them access to the discerning Mediterranean cod markets and a means to ship cod long distances in the days before refrigeration. 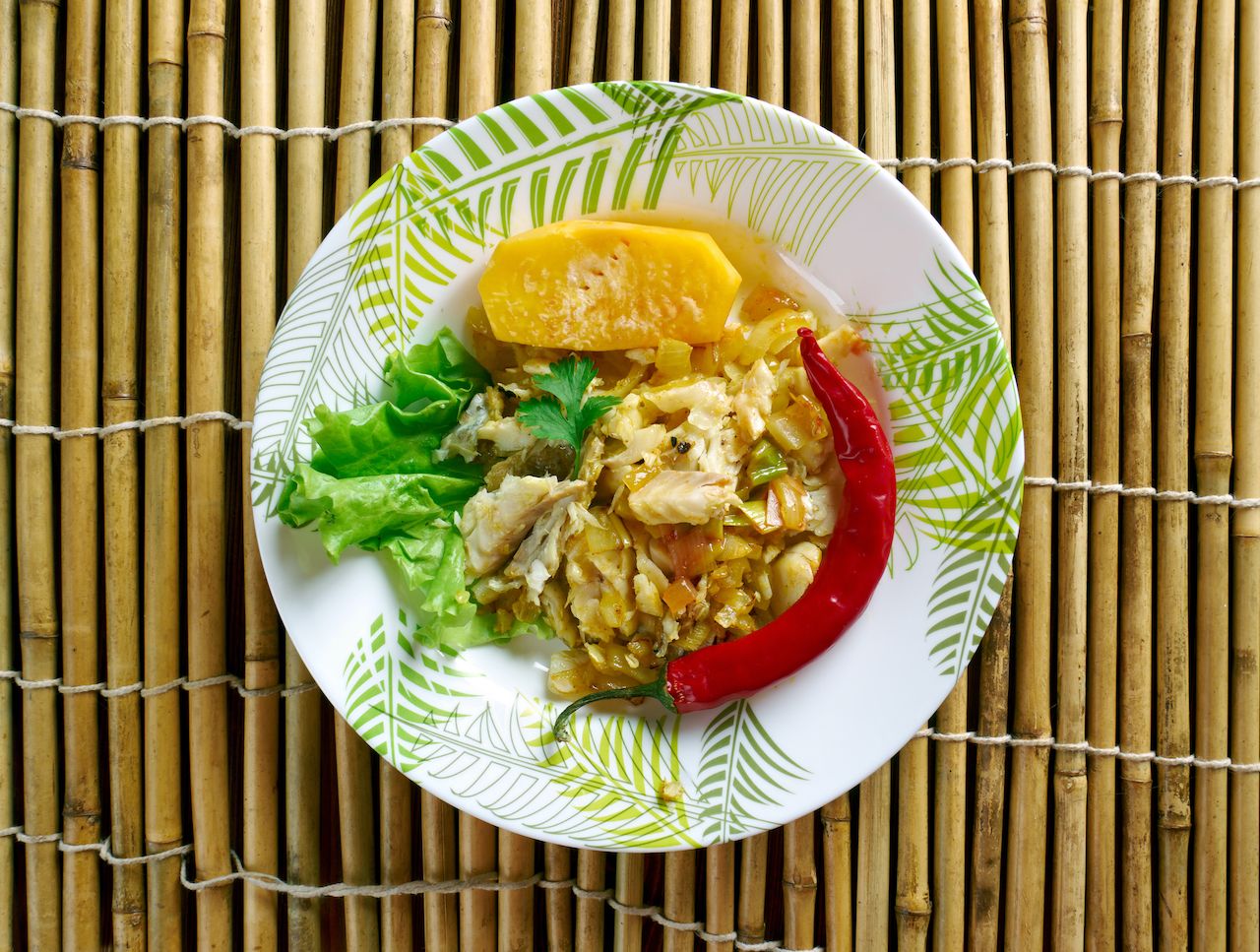 This ackee and saltfish dish is made with shredded cod and cooked-down fruit from the ackee tree, which has beguiling red fruit that is toxic if prepared improperly. This dish links the New England mercantile class to the transatlantic slave trade: New England fisheries began producing low-quality cod as food for the slaves taken from West Africa where the Ackee tree is native.

In the 17th century, the British colonies of the West Indies began harvesting sugar with slave labor. To maximize land for sugar cane growth, plantation owners imported salted foods to feed their slave populations. The nutrition and salinity of salted cod provided nourishment for slaves forced to work long days under the tropical sun.

Caribbean plantations opened up a growing market for all of the low-quality fish rejected by European markets and created a profitable market from what was once waste. 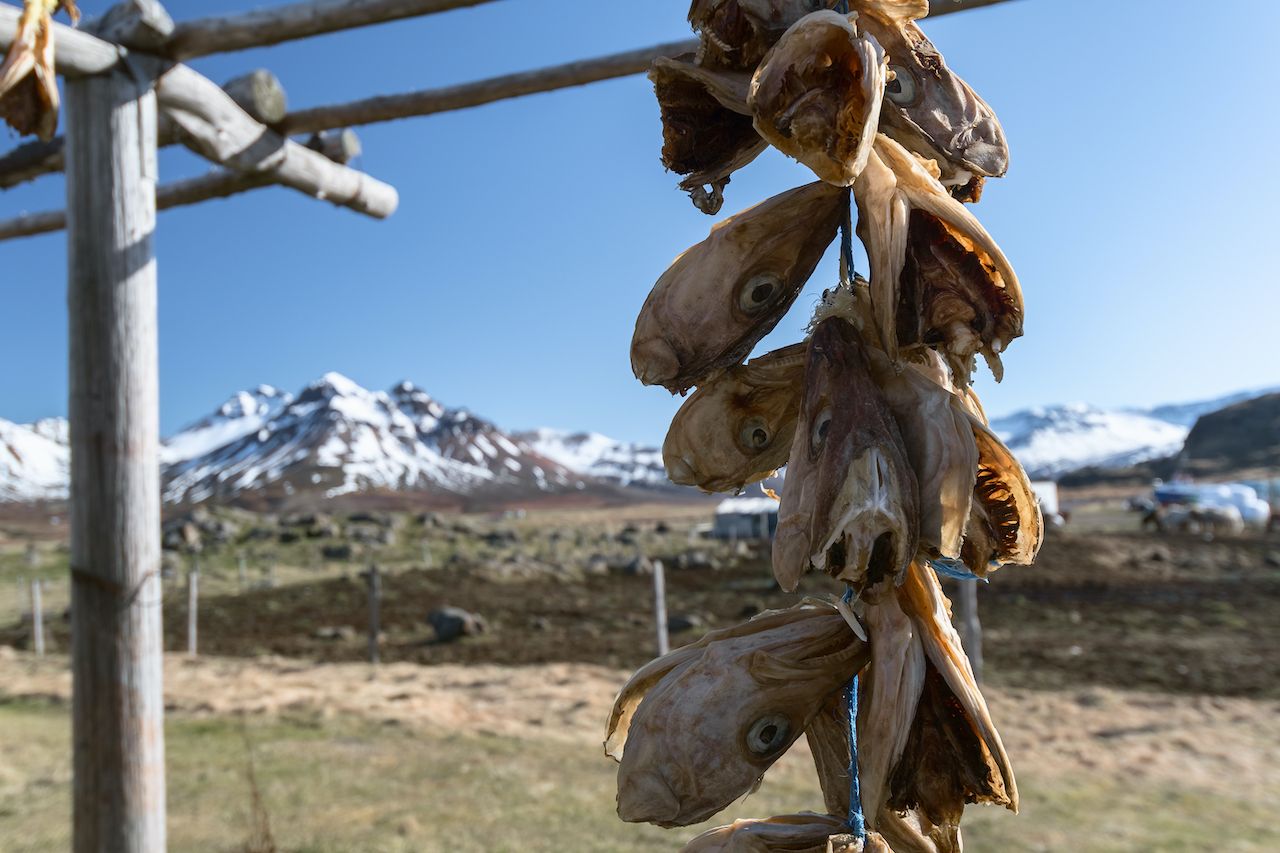 In many Caribbean countries, there is lore surrounding cod heads since salted cod arrived headless. Far to the north in Iceland, where cod is native to the cold offshore waters and once lived to be 30 years old, cod heads are a delicacy.

For centuries, dried cod heads were carried inland by pony to be enjoyed as snacks. The patience required to pick apart a head was seen as virtuous, accompanied by the Icelandic superstition that eating the head of an animal increased intelligence. 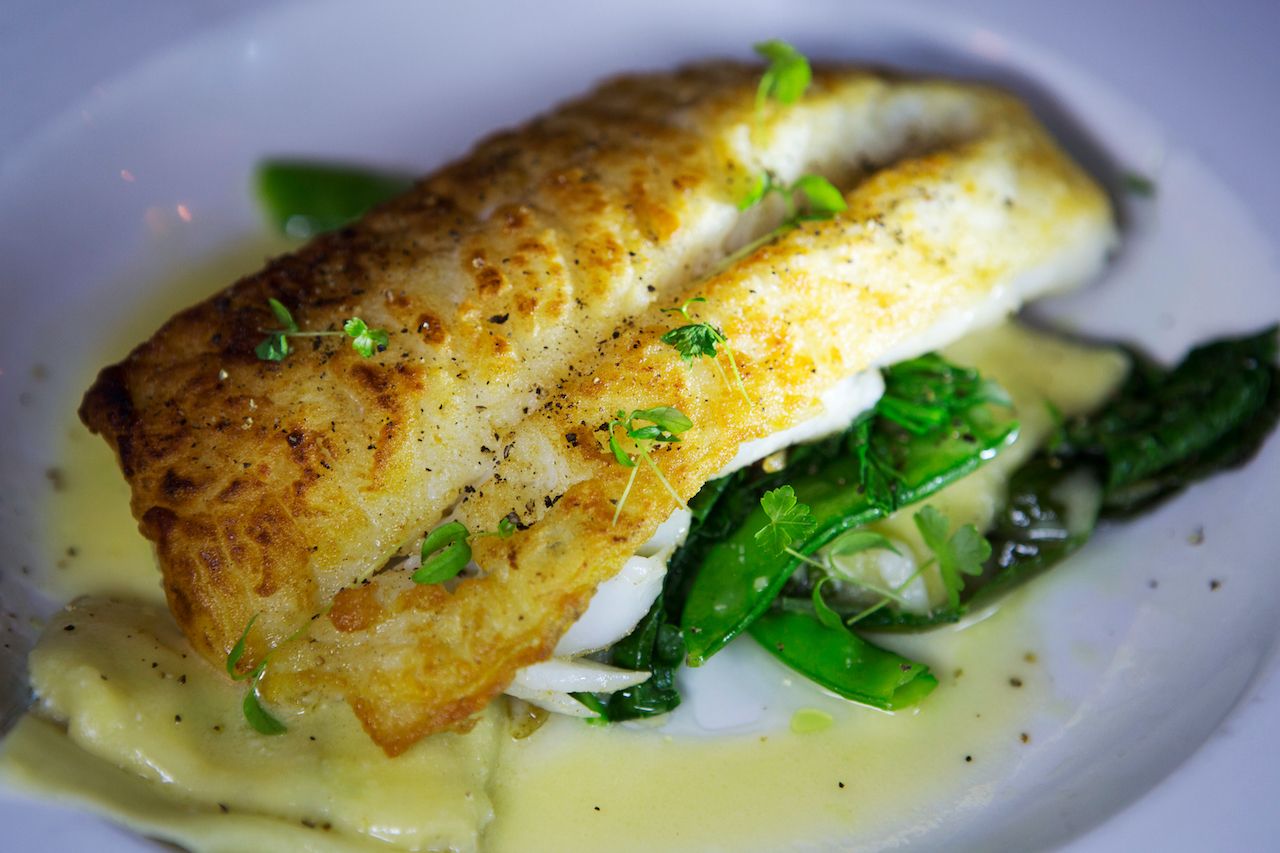 Only fishing villages know what the thick flakes of freshly caught Atlantic cod taste like after being pan-fried and garnished with parsley and lemon. For years, inhabitants of Newfoundland assumed the fish would always be abundant.

But Newfoundland fishers are facing the end of a 1,000-year fishing spree. In 1992, the Canadian government announced cod to be commercially extinct and placed a moratorium on cod fishing off the banks that once attracted Viking and Basque fishers.

In 1873, Alexandre Dumas wrote, “It has been calculated that if no accident prevented the hatching of the eggs and each egg reached maturity, it would take only three years to fill the sea so that you could walk across the Atlantic dryshod on the backs of cod.” But cod met a predator more insatiable than it — humans. While fishing for cod has become a mere memory for many fishers, cod recipes are vestiges of a bygone era where abundance rather than scarcity bridged cultural gaps that stretched far beyond the Atlantic.

Food + DrinkHow to eat salmon without hurting the environment
Tagged
Food + Drink
What did you think of this story?
Meh
Good
Awesome