A trip to the grocery store can be fraught. With Earth’s environment in a precarious position, the list of endangered species growing fast, and devastating climate change on our doorstep, it’s become more important than ever to carefully consider what we eat. That doesn’t just mean buying organic eggs and milk. When it comes to stocking our pantries and refrigerators, many people are now considering where their food — especially meat proteins like fish, beef, and chicken — comes from and how it was raised.

The seafood aisle at the grocery store can be especially difficult to navigate. Take salmon, for example. There are two types of salmon available for purchase: wild-caught and farm-raised. And even though we think of salmon coursing through rivers during spawning seasons (and running into hungry bears along the way), around 90 percent of the salmon Americans eat — the garden variety salmon filets that you find at your local grocery store — are raised in aquaculture farms (net cages hanging in the water near the ocean’s shore).

The planet needs salmon aquaculture. The world’s population is growing, and according to the Global Salmon Initiative, the demand for protein is expected to grow 40 percent by 2050. Already strained wild salmon stocks simply can’t keep up with the needs of the population, and some species are already endangered, like California’s Coho salmon and the Pacific Northwest’s Chinook salmon. If everyone on the planet only ate wild salmon, the wild stocks would collapse. Yet the unfortunate truth is that farmed salmon poses a serious threat to the environment (more on that soon).

“Eating less salmon is not the solution either,” says chef Rick Moonen, founder of the Seafood Choices Alliance. “As long as science-based regulations restrict the amount of wild salmon that are hunted every season, we should absolutely support the fishing communities and everything tied to it.”

There is a sustainable middle ground on the impact of farmed versus wild-caught salmon. These are the environmental considerations to have when you’re planning to buy salmon at the grocery store. 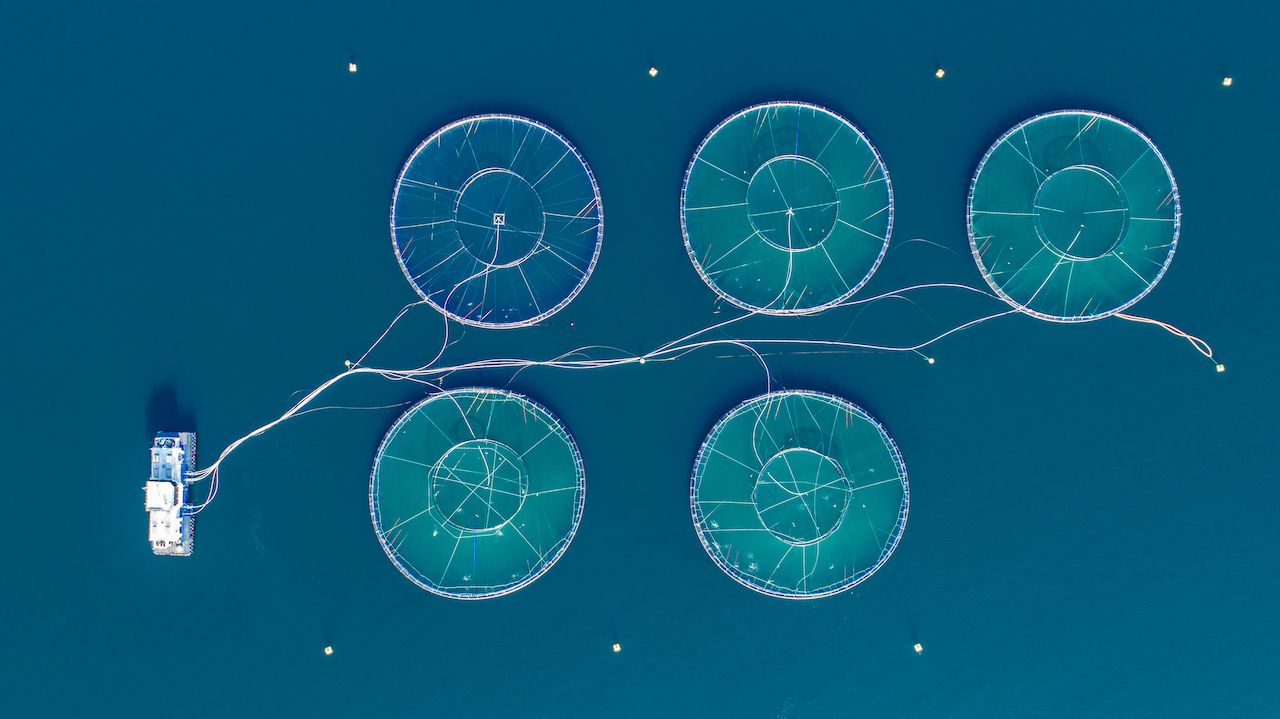 Farmed salmon feels like an environmentally friendly option because it takes some pressure off of the wild salmon stock, as mentioned earlier. And as the Global Salmon Initiative points out, that can certainly be true if aquaculture is operated sustainably. Unfortunately, that’s not always the case.

Consider that a salmon’s diet is made up of smaller fish. According to Stanford Magazine, feeding farmed salmon means significantly depleting food sources for wild salmon. These smaller fish, like anchovies and sardines, are fished at enormous rates, depleting the ocean of a valuable food source for other ocean life.

Additionally, the ocean-bound nets that farmed salmon are raised in around countries like Norway and Chile can sometimes break, thereby releasing farmed salmon into the wild population where they spread disease. The marine advocacy organization Oceana explains that salmon are tightly packed into these nets and can easily transmit bacterial infections like piscirickettsiosis. To combat these diseases, farmers douse their fish in antibiotics and pesticides — chemicals that inevitably drift into the surrounding water.

Now, you might be wondering why any of this matters. Can’t farmed salmon simply replace their wild cousins? After all, there are no wild cows wandering the plains.

It’s a reasonable question with a complex answer. To put it in the simplest terms, wild salmon are key to sustaining the health of Earth’s river ecosystems. Salmon are an essential food for bears. When the fish die, they distribute nutrients into rivers that then flows into the ocean. Nitrogen produced during spawning encourages the growth of trees. There’s also the human element: Wild salmon runs in Alaska provide half a billion dollars in revenue to commercial fishermen.

Although it might sound counterintuitive, the best way to support wild fisheries is to eat wild fish. However, with so many options and species farmed and fished in places from New Zealand to Norway to Washington state, you might need help picking the most sustainable option.

How to find sustainable salmon 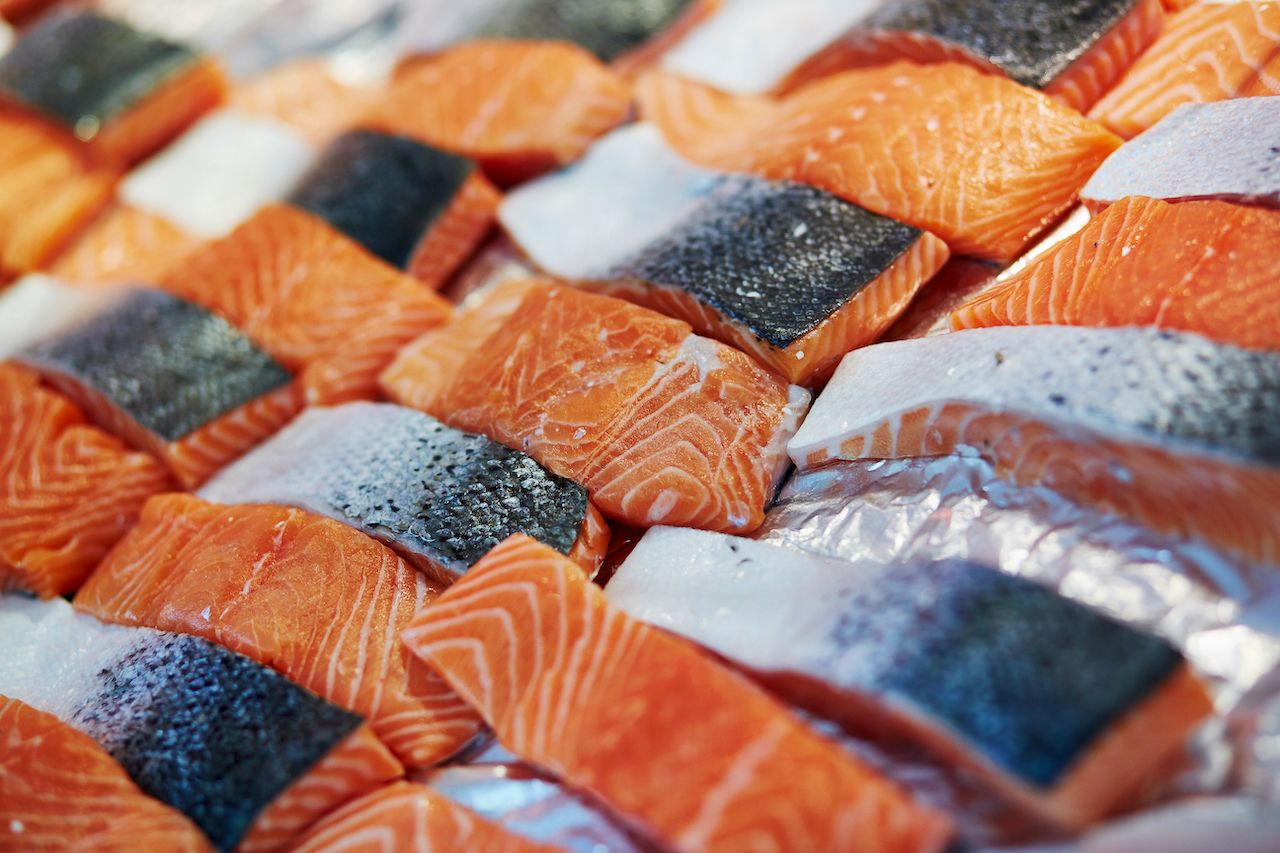 Wild salmon runs are managed independently of salmon farms, and their goal is simply to maintain wild salmon populations for the health of the environment at-large (rather than to meet the demands of a salmon-hungry public), so you can trust their intentions.

The most sustainable type of wild salmon comes from Alaska, according to the Environmental Defense Fund, where wild salmon runs are healthy and well-managed (however, much of Alaska’s wild salmon is exported to China). That means the population isn’t in danger of being depleted anytime soon, and there are legally enforced caps on how many fish each boat is allowed to catch to prevent overfishing. Alaska even banned salmon farming in 1990 — legislation which is nowhere near being overturned, according to Seafood Source. The initiative is working. In Bristol Bay, Alaska, for instance, the 2018 sockeye salmon run produced 62.3 million fish. Most wild Atlantic salmon, on the other hand, are protected by the US Endangered Species Act.

“Most of the salmon from Alaska in the market are truly wild,” says Ray Hilborn, a marine biologist and fisheries scientist who works closely with the sustainable fisheries department at the University of Washington. “Also the environmental impact of these fisheries is very low compared to almost any other source of protein, including plant-based. For example, no pesticides, antibiotics, or fertilizers are used in production, [and] no land transformation takes place.”

This doesn’t mean that salmon aquaculture farms are evil. Many do endeavor to practice sustainability. The Monterey Bay Aquarium publishes a nifty tool called Seafood Watch, which helps consumers choose the best seafood, either fish or farmed. Though these recommendations are subject to change, Seafood Watch currently indicates that the best choice is Atlantic salmon farmed in net pens in Norway and New Zealand (as well as, it’s worth mentioning, pink and sockeye salmon caught in Washington).

“Farm-raised Atlantic salmon aquaculture practices have been evolving to create a more sustainable process,” says Moonen, who advocates for Seafood Watch in addition to working with Seafood Choices Alliance. “These farms are producing a good salmon that is not destroying the natural habitat [and] help to supply a balanced, and often more affordable, aquatic protein to the mass public.”

SustainabilityAlaska Is the Sustainable Fishing Model the World Needs
Tagged
Food + Drink Sustainability
What did you think of this story?
Meh
Good
Awesome

May 23, 2022 Alex Bresler
✖
travelstoke
Download the mobile app
stoked by