The preferred destination of partygoers and spa enthusiasts, Sharm el-Sheikh near the tip of Egypt’s Sinai Peninsula is a beachy paradise filled with high-end resorts, bars, and restaurants. It certainly has its charms. However, if your goal is to appreciate the natural beauty of Egypt’s coasts in places that range from slightly to far off the beaten sand path, there are some very worthy alternatives, all of which are accessible from major cities by car.

Swim season never ends in Egypt, thanks to its warm climate. That being said, the water temperature on Egypt’s Mediterranean can be cool (in the low 60s Fahrenheit) in mid-winter. It’s best to avoid going during Ramadan as some businesses and restaurants have limited daytime hours, although the beaches are decidedly less crowded. Springtime is ideal for a visit — just note that Ramadan starts in April this year.

Hurghada and the Giftun Islands: Sharm, but for locals 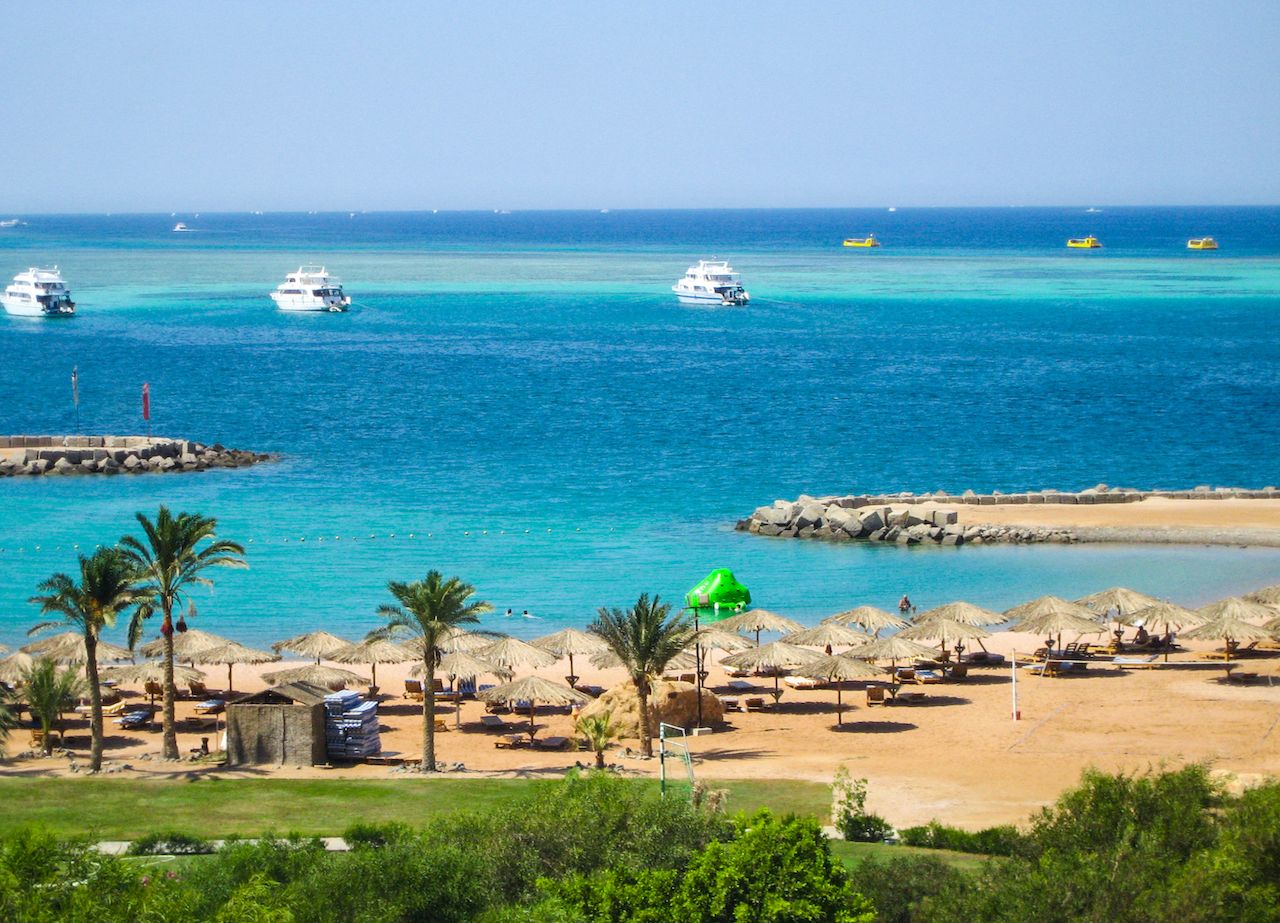 Hurghada, a large resort town falling smack dab on the center of the Red Sea’s western coast, is the most similar to Sharm on this list in terms of its party, resort vibe. But a few features make it perfect for travelers who want not only the opulent trappings of a posh resort town but also the chance to interact more with Egyptians and experience North African city life.

After a relaxing swim, venture out to El-Dahar Square and wander around the local souq, an open marketplace. Wooden crates and boxes are piled high with fresh and colorful produce like strawberries, oranges, tomatoes, jute leaves, and mint, and barrels are brimming with aromatic spices and dried hibiscus flowers. Locals rush around buying food for that night’s dinner, stopping only to chat with friends, their voices blending into the cacophony of shouted prices, calls to prayer, and car horns.

Lounging in the uninterrupted sunshine with a drink in hand is also an option. And if parlaying the day’s drinking into an evening of partying is an essential vacation element for you, Hurghada has that as well. A handful of nightclubs and bars line the main roads close to the resorts.

If you want to infuse adventure into your beach retreat, Giftun Islands National Park is a mere boat ride away. Your hotel can usually arrange a snorkel or even dive trip to the islands, or you can find a tour operator in town. The islands are ideal for observing the Red Sea’s magnificent marine life; their pristine waters are replete with corals, fish, turtles, starfish, and more. 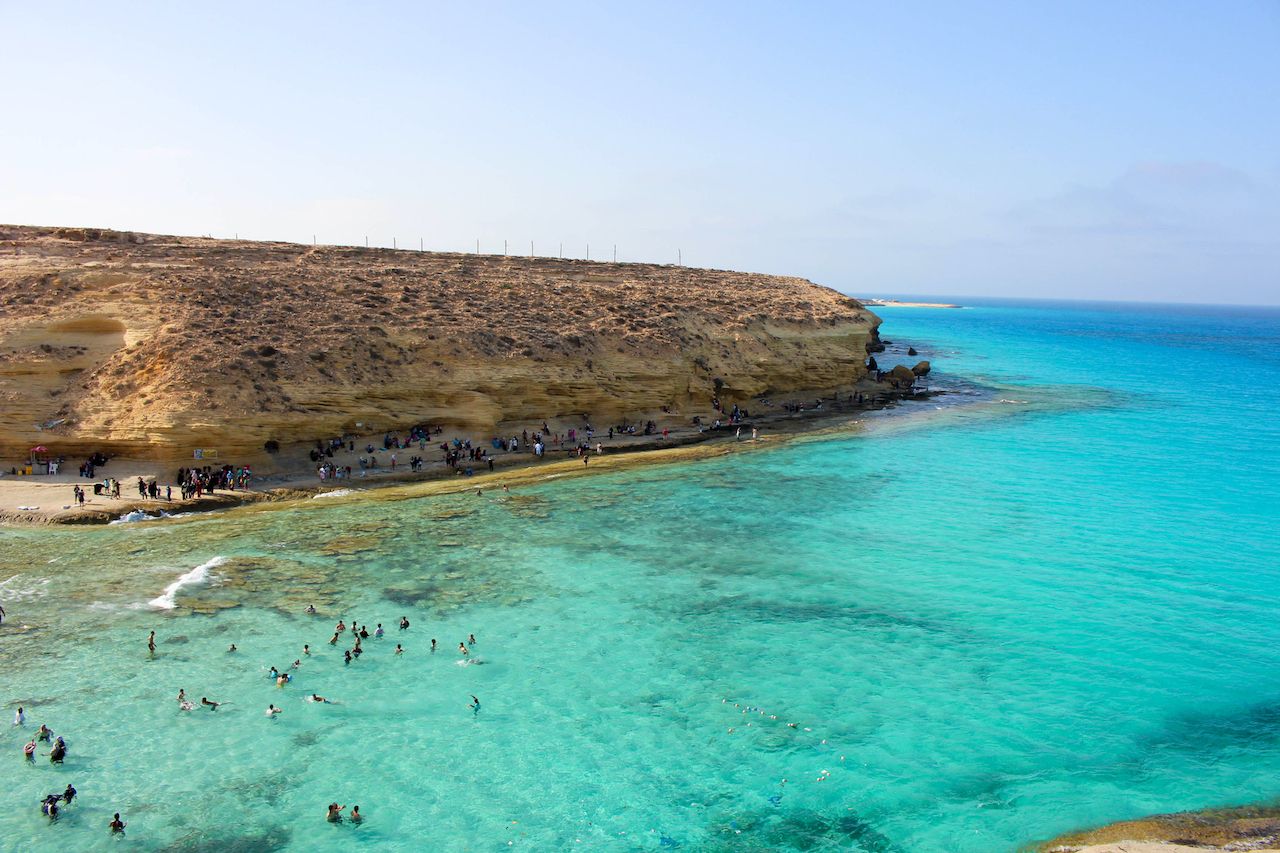 Neither off the grid nor flooded with tourists, Marsa Matrouh is a port town on the Mediterranean Sea west of Alexandria with long stretches of sandy beach punctuated by caves and climbable outcroppings of eroded shoreline. Since most of Marsa Matrouh is insulated from rough waves (and the accompanying flurry of sediment) by a natural breakwater of rocks, the water is crystalline and provides high visibility for snorkelers.

Another bonus is that you can easily incorporate sightseeing into your itinerary while at Marsa Matrouh. The city is brimming with history, dating back at least to the time of Alexander the Great, when it was known as Paraitonion, and likely even earlier to the Rameside era in 1200 BC. Evidence for this can be found in the ruins of a temple to Ramses II.

There’s no shortage of ancient architecture below the waves too, the most prominent examples being the Drowned City of Caesar and Cleopatra’s Drowned Palace. Buried below the mercurial waters of the Mediterranean, the ruins themselves are too dangerous for vacationers to access, even equipped with scuba gear. Nevertheless, you can still interact with the memory of Ptolemaic Egypt. When the tide is low, and the sea is calm, walk to a section of Marsa Matrouh called Cleopatra’s Beach. There, two giant stones known as Cleopatra’s Bath rise up on the edge of a wide, semi-submerged outcropping. Local legend has it that the queen herself bathed in it with her lover Marc Anthony.

Egyptians have long seen the appeal of Marsa Matrouh. Almost every day, local teenagers can be seen scaling rocks and splashing about. Families, wading around on protrusions of rock jutting out from the shore, are happy to recommend the best places to swim or to point you in the direction of the caves, the walls of which are covered in old Coptic scrawlings.

Ain Sokhna: Close to Cairo with a dose of history 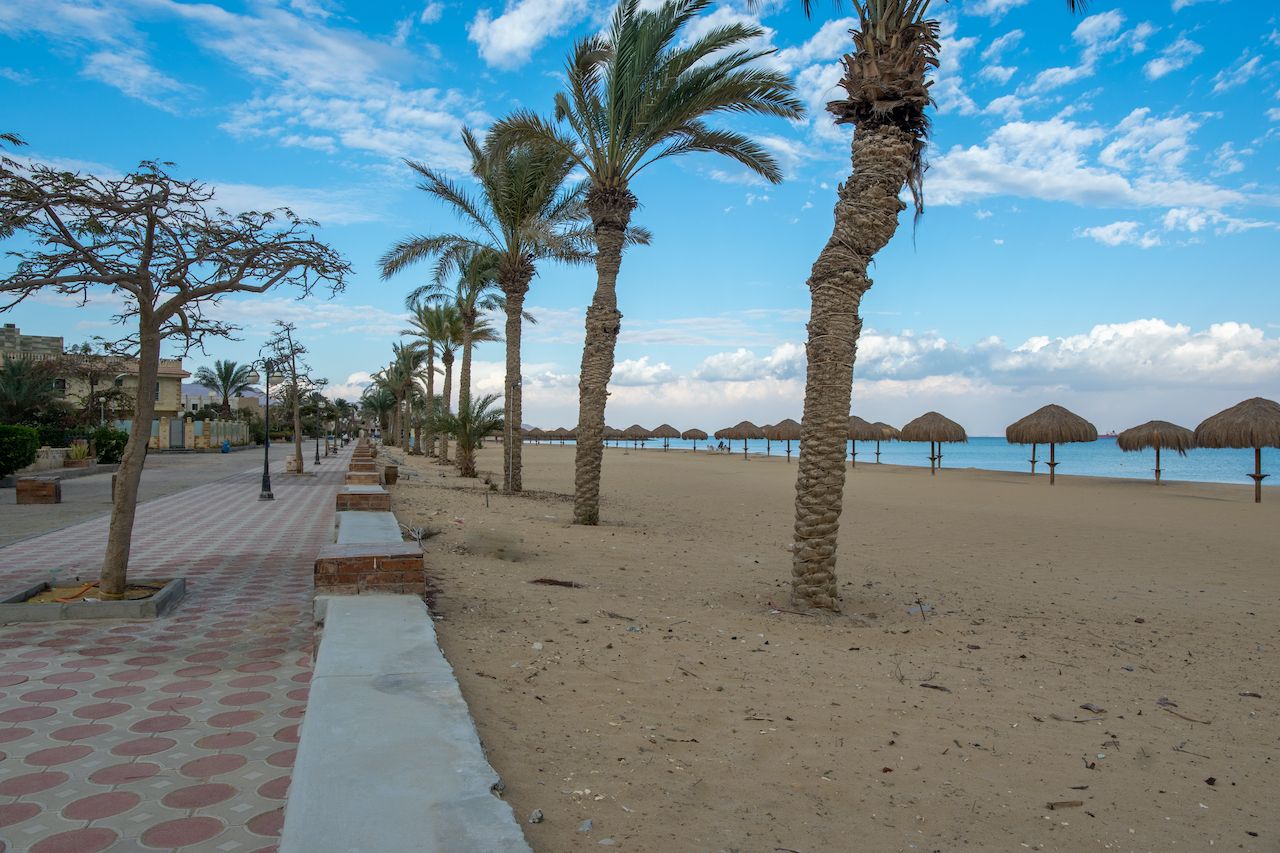 While Ain Sokhna isn’t really known outside of Egypt, it deserves to be, given its affordable prices, clean beaches, and proximity to the famed Monastery of St. Anthony. Whereas most major Red Sea destinations are five to eight hours by car from Cairo, the drive to Ain Sokhna is a mere hour and a half.

Cinnamon-hued mountains with craggy peaks loom above the line of resorts, a stark contrast with the squishy, oatmeal-hued sand and endless aquamarine expanse of sea in the opposite direction. Like other Red Sea cities, Ain Sokhna’s waters are teeming with fish, vibrant corals, and crabs.

After you’ve had your fill of snorkeling, strolling on the beach, and lunching on denis (a tasty, local sea bream), take the time to visit the Monastery of St. Anthony. It was founded in 300 AD by the eponymous St. Anthony, one of the first Desert Fathers and the person credited with starting Christian monastic life. Below the floor of the church, which dates to the 12th century, are underground rooms used for study and prayer that are as old as the original monastery itself and which you can see when the monk pulls back the rug to reveal a glass floor. Equally impressive are the paintings of saints dating back to the seventh and eighth centuries.

Within the gates, a garden fed by a small but resilient spring sits in the center of architecture both ancient and new, the latter being the result of a massive restoration effort in the early 2000s. Bibliophiles will be delighted by the library, which contains one of the largest collections of Coptic manuscripts in Egypt. Ambitious travelers can depart from Cairo, enjoy the beach, and take a monk-guided tour of this historic site all in one day. 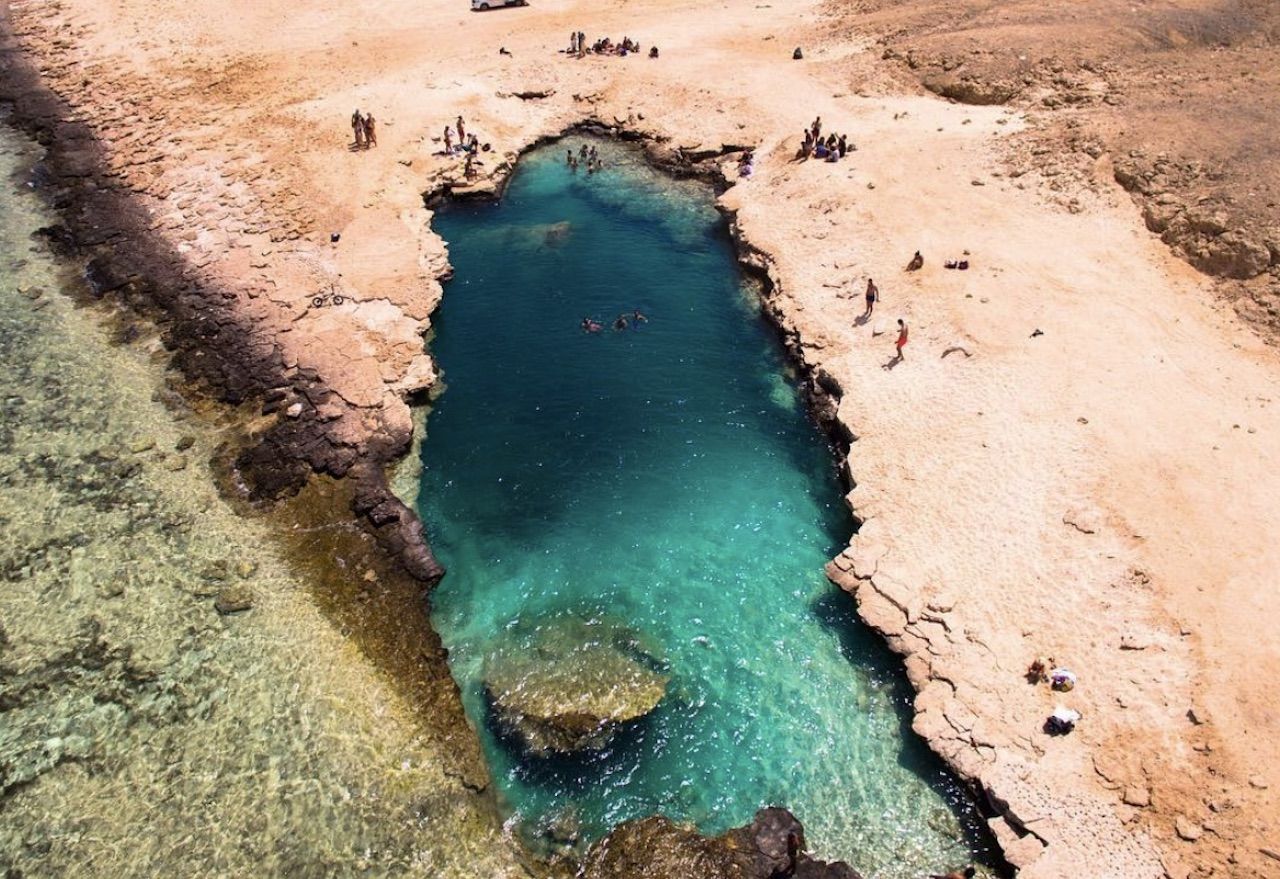 Nayzak Beach is certainly the smallest beach on this list, but its size in no way diminishes its appeal. Located a short drive from the seaside town of Marsa Alam, two-thirds of the way down Egypt’s Red Sea coast, Nayzak is more accurately described as a natural pool within a beach. While it’s possible to take a taxi from the city, you’ll end up paying the driver to wait to take you back after your swim. There’s no way to hail a taxi from Nayzak. If you want a leisurely, unrushed stay, it’s better to rent a car from Marsa Alam.

From an elevated vantage point, Nayzak resembles an almond-shaped, aquamarine gem embedded in the rosy-brown stone of the coast. Locals went a different direction when nicknaming the swimming hole, settling on “shooting star” owing to their belief that a meteorite strike created it. While geologists agree that this is not the case, the moniker stuck.

Sheltered from hidden currents and powerful waves, Nayzak Beach is a safe place to float unperturbed and enjoy the warmth of the Red Sea. At its deepest, the pool is about 30-feet deep; at either tip, it’s possible to sit on the rock and sand below. The only downside to this literal slice of beachy paradise is the lack of facilities and shade. Plan on bringing what water, food, towels, and umbrellas you think you’ll need so that you won’t be forced to interrupt your sunbathing and diving with a drive back to Marsa Alam for supplies. 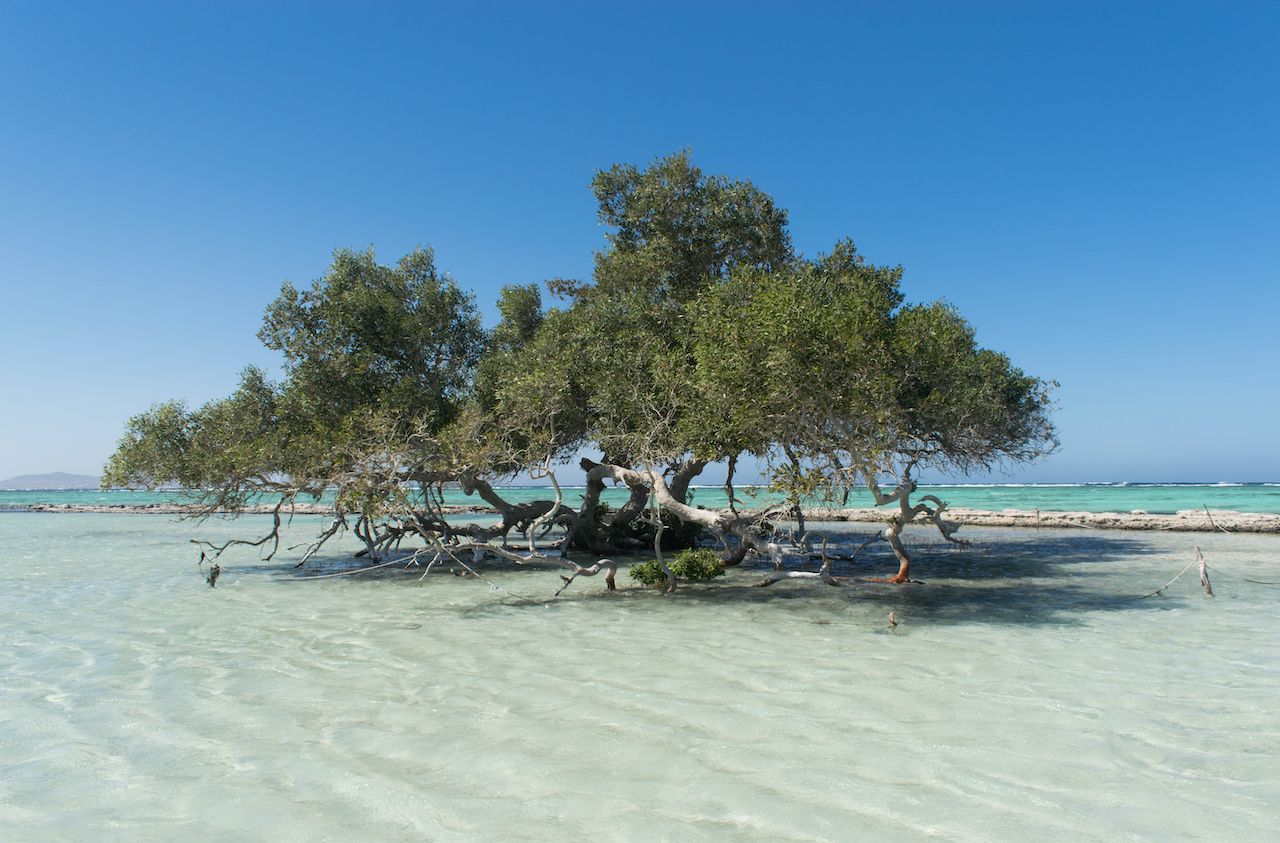 South of Marsa Alam, the Wadi el-Gemal-Hamata Protected Area affords visitors the chance to swim and to see some of Northeast Africa’s most impressive nature. In total, the area is home to an estimated 140 plant species and over 100 animal species, including the Nubian ibex, gazelle, hyrax, sand cat, and caracal.

Within the protected area, two islands in particular — Wadi el-Gemal and Wadi Qulaan — serve as great launching points for snorkeling or scuba diving. A series of tiny islands connected by shallow water and interspersed with mangroves make for a view reminiscent of a South Pacific vista. Venture underwater and you’ll find multicolored fish flitting about the abundant coral reefs. If you’re willing to travel a bit further offshore, you might see dolphins or even the dugong, an animal closely related to the manatee and the only surviving member of its family.

Compared to resort towns, the amenities in the protected area are somewhat limited though there is a visitor’s center. After a long day of swimming and hiking, hungry visitors who have booked inclusive tours can sit and eat with the Ababda bedouin tribe that lives in Wadi el-Gemal. If you’re feeling brave, you can even try camel cheese.

DivingThe Best Diving in Egypt’s Red Sea, for Pros To First-Time Divers
Tagged
Beaches and Islands Insider Guides Egypt
What did you think of this story?
Meh
Good
Awesome