The Hamptons or the Catskills? The choice New Yorkers make between the city’s top two weekend escapes is as telling as their choice between Manhattan and Brooklyn. It’s more than a destination; it’s an identity. You’re either the Hamptons — a Long Island refuge favored by wealthy Upper East Siders — or the Catskills — an affordable swath of upstate New York colonized by artsy-fartsy Brooklynites. There is no in-between.

But in recent years, these disparate destinations started looking eerily similar. Upstate hamlets like Kerhonksen are now synonymous with million-dollar homes like East Hampton. Nearby towns along the Hudson River are now chockablock with the same Soho-style boutiques found in Sag Harbor. Counties like Putnam, Dutchess, Ulster, Greene, and Columbia even earned a new nickname — the Camptons — and a recent surge in wealthy New Yorkers snatching up local real estate ensures the inevitability of their Hamptonsification.

This reality poses a quandary for New Yorkers who once identified with the Catskills. If the uber-rich rule both vacation destinations, where does everyone else go for a long weekend outside of the city?

The answer can be found in Sullivan County, where the Catskill Mountains end and the Delaware River begins. Here, a new set of towns have emerged as the go-to destinations for city-dwellers opposed to Long Island luxury and Hudson River haughtiness. These tiny enclaves are everything the Hamptons and the Camptons are not — under-developed, inexpensive, and unpretentious. They’re the un-Hamptons, and they’re in the midst of a golden age.

A brief history of the region

The Catskill Mountains’ sleepy western corner saw its fair share of golden ages in the past 150 years: as a city escape in the late 19th century, a popular Jewish getaway in the mid-20th century (immortalized in Dirty Dancing and The Marvelous Mrs. Maisel), and most famously, as the 1969 hippy haunt that hosted Woodstock. But during the latter half of the 20th century, weekenders forgot Sullivan County and left its towns for dead.

Here’s everything you need to know before you visit. 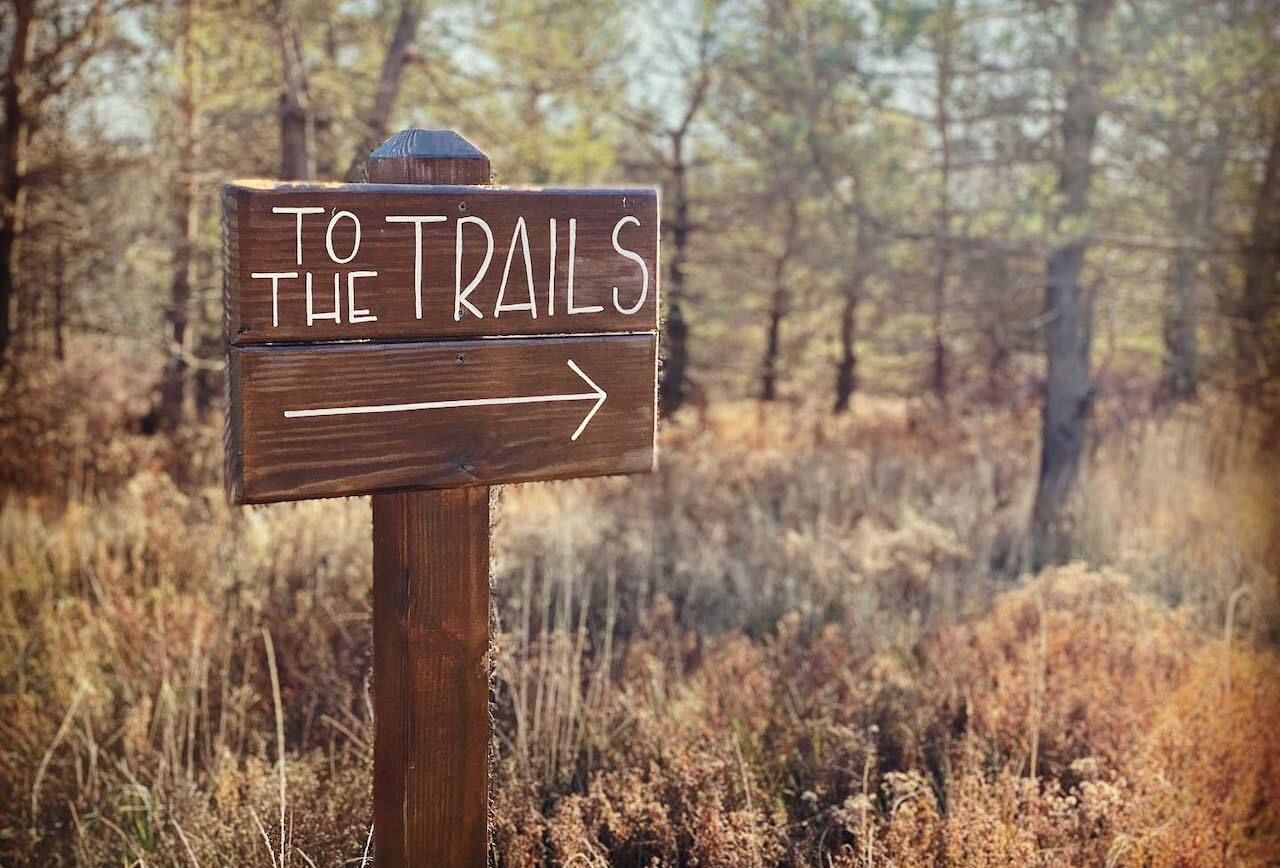 Access is one of the main reasons Sullivan County remained untouched for so long. Unlike the Camptons, there’s no Manhattan-bound train line or bus route leading to the area’s most sought-after locales. Travelers must rent their own set of wheels to properly enjoy the region.

The top towns to visit 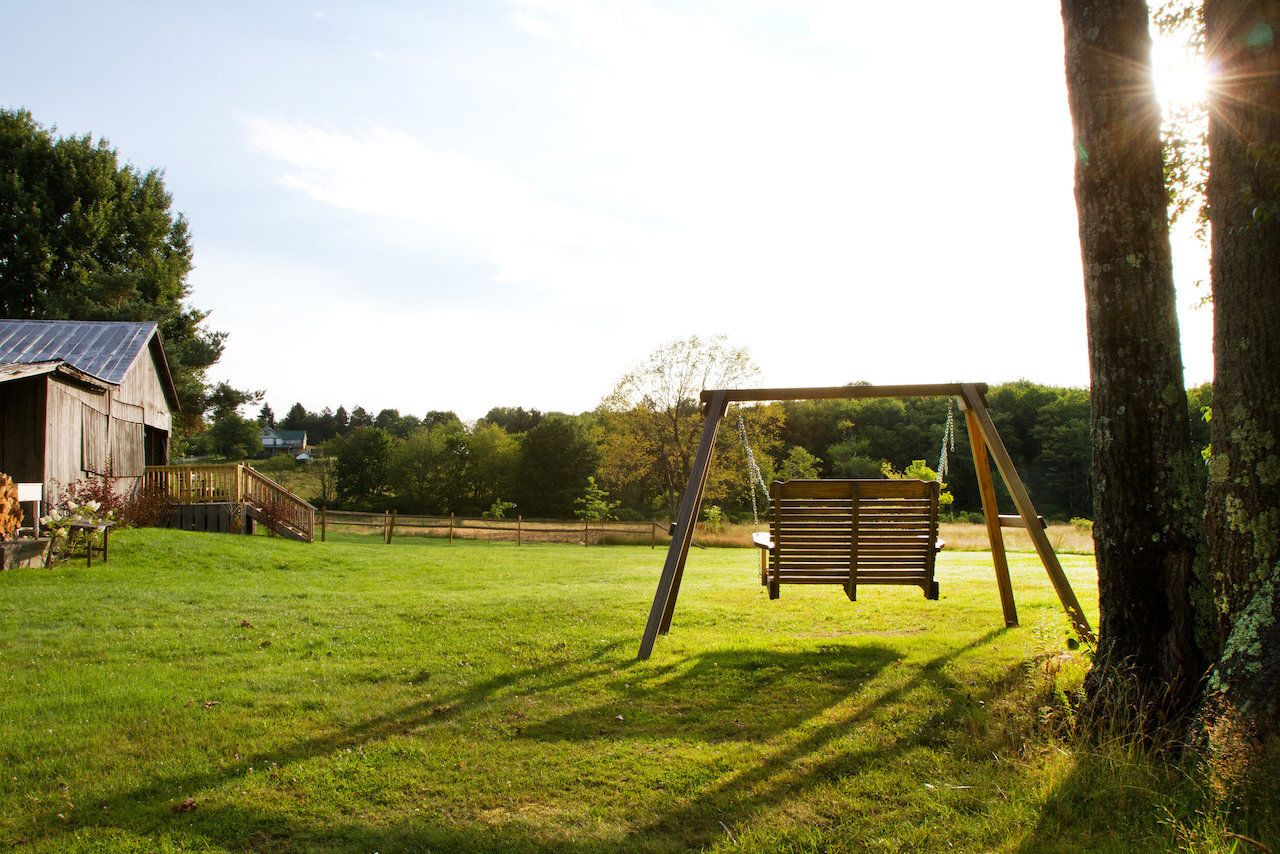 Livingston Manor is the epicenter of the current renaissance and the best place to find local lodging. A five-minute drive from Main Street leads to Arnold House, an inviting resort on Shandelee Mountain with an on-site spa and access to nearby hiking trails. The rustic-chic cottages behind the Catskill Brewery, formerly inhabited by the company’s brewmaster, make a smart base for folx who’d prefer to be within walking distance of town.

The shopping on Livingston Manor’s Main Street is an interior designer’s dream. Taylor + Ace, which opened in 2020, sells a well-curated collection of vintage furniture and housewares at reasonable prices. Homestedt is a cozy shop with stylish outdoor gear and goods fit for rural living. Nest, owned and operated by former Vogue design director Anna Bern, is a boutique featuring Scandi furniture, Moroccan rugs, modern art, and ceramics. Bern’s store is the closest you’ll get to the Hamptons, but her classy assortment of home goods is still worth a gander. 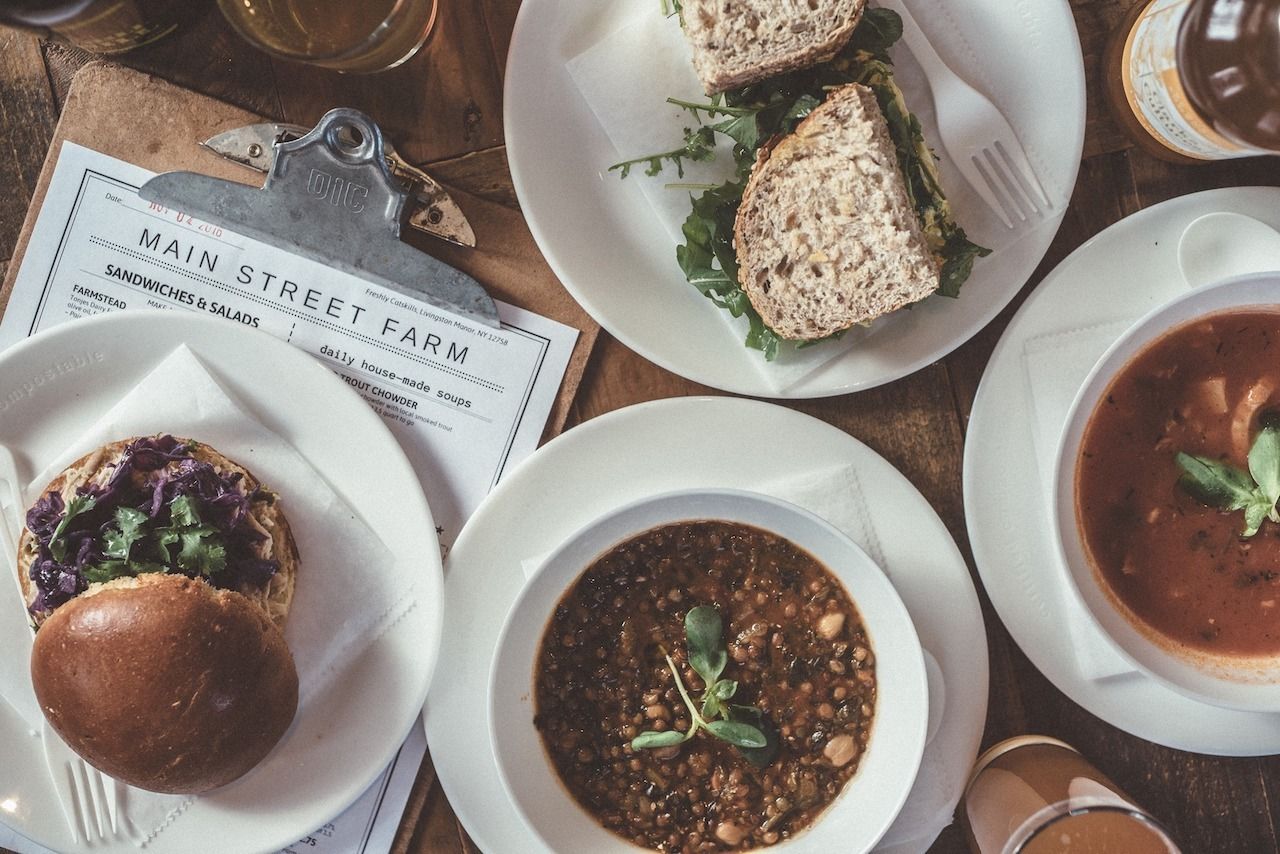 When it comes to food and drink, Livingston Manor serves Sullivan County’s top treats. For wood-fired pizza and creatively mixed cocktails, try the Kaatskeller, located in the center of town. Main Street Farm is a trendy market and cafe that sells local produce, artisanal foods, and offers a short menu of to-go sandwiches and salads. Upward Brewing Company — a 2019 addition — is a must-visit for anyone in the region. The beers are smooth and unfussy, the elevated pub grub suits both carnivores and vegetarians, and the property is like a millennial-approved playground. Located on over 120 acres of land, Upward boasts a chalet-style restaurant, an expansive field filled with picnic tables, and a 30-minute hiking trail that leads to panoramic views.

Narrowsburg, located 45 minutes south of Livingston Manor, draws an eclectic mix of antique aficionados and urban sophisticates with its small-but-mighty offerings. Visitors will find the town’s finest shops and eateries snuggled together along Main Street, a solitary block perched on a bluff overlooking the Delaware River. 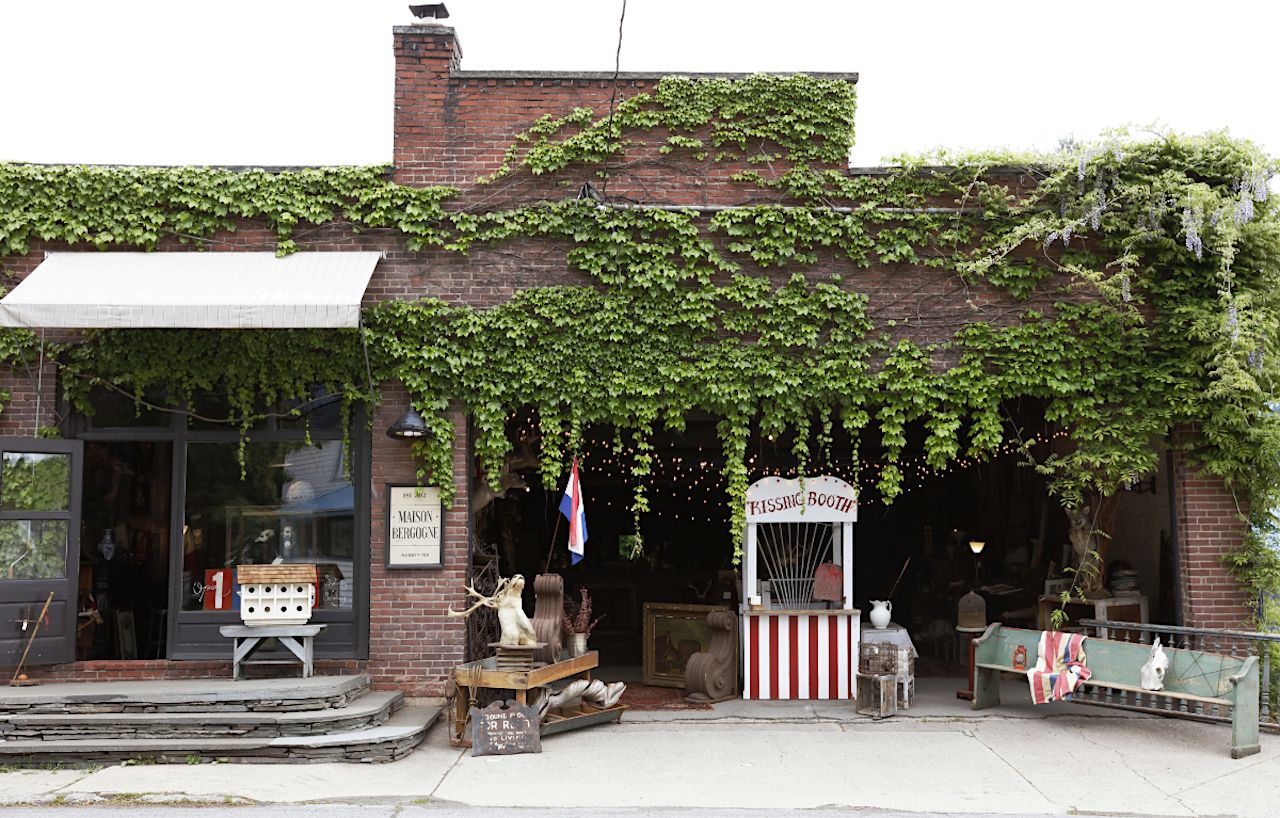 Tusten Cup, located on the edge of town, is a hip java joint serving breakfast and lunch. Sunny’s Pop hocks high-end hipster bait for the home. One Grand Books is a literary oasis that sells titles selected by famous actors, thinkers, and writers. Antique stores, like Maison Bergogne, range from cute and kitschy to down-right bizarre. 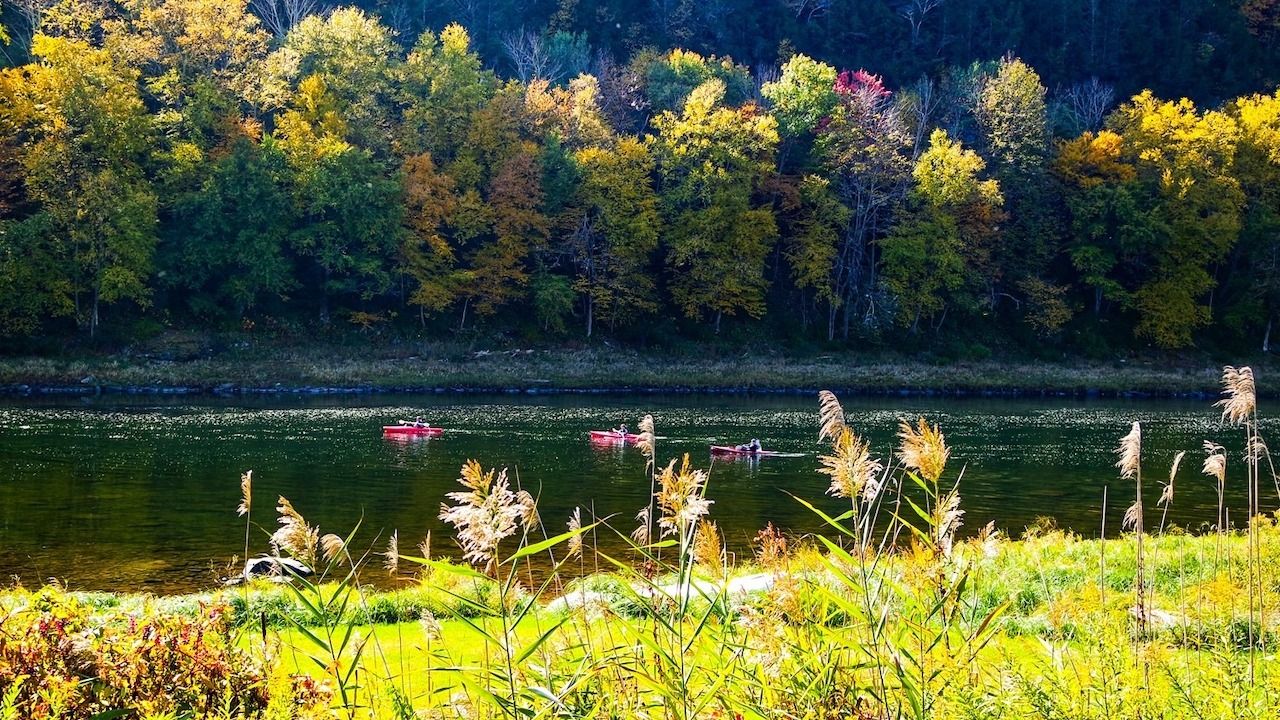 If you’re an outdoor enthusiast, Narrowsburg is the ideal location to set up camp. In summer, daring divers jump into the Delaware River from cliffs underneath the Narrowsburg-Darbytown Bridge while families head upstream to wade in the water at nearby Skinner’s Falls. Lander’s Rivers Trips rents rafts, tubes, and everything else needed for an aquatic adventure on the Delaware. For epic views of the river, hike the Tusten Mountain Trail — a 1.5-mile loop just south of town. The Blue Fox Motel, a retro lodge located close by, is a comfy place to rest your head once night falls. 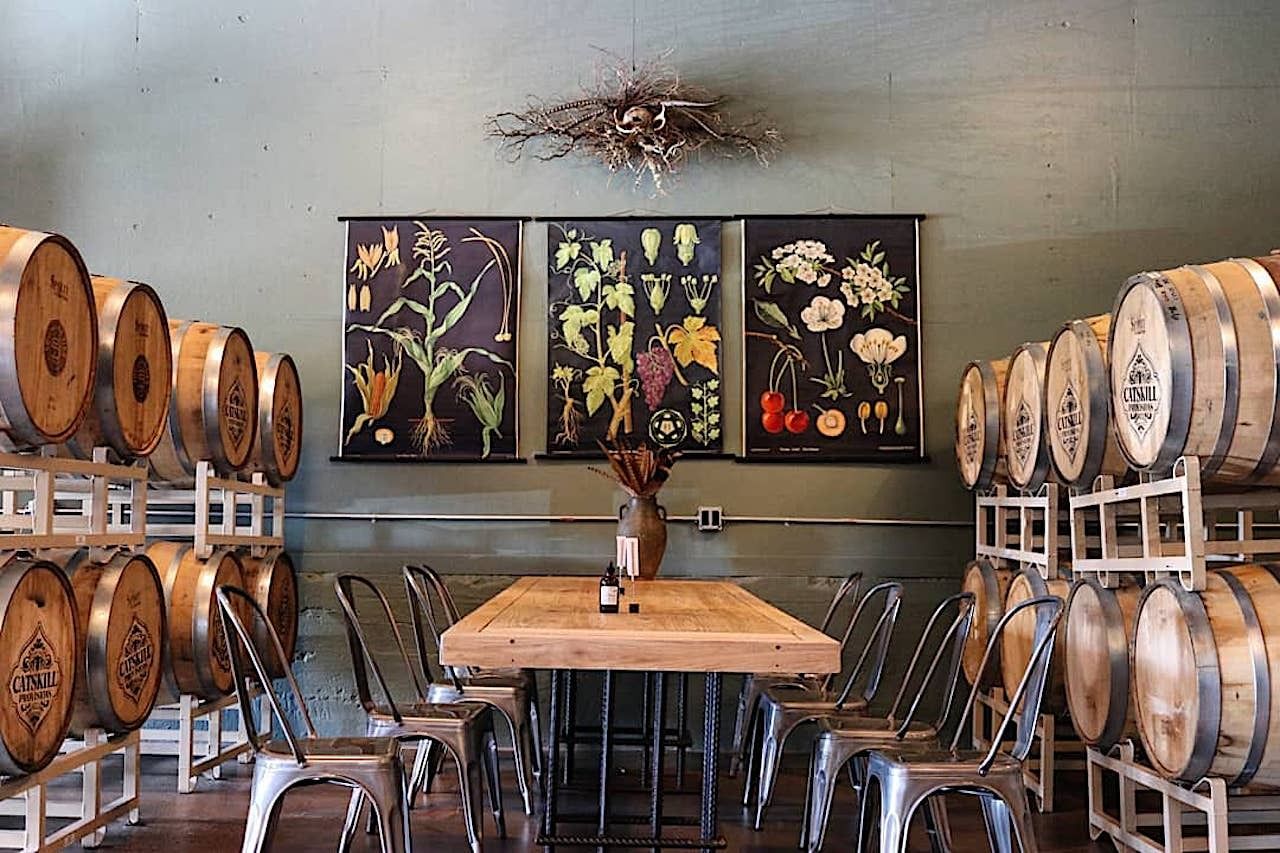 Visitors who come for the market should stay for the restaurants. Catskill Provisions, an artisanal food-and-spirits company, opened a tasting room in 2020 where foodies can sample locally made whiskey, vodka, or gin alongside meals made with ingredients from nearby farms. The Kitchen Table is the go-to for coffee and baked goods like homemade oatmeal cream pies. Bà & Me serves a surprisingly good grab-and-go selection of Vietnamese food unavailable elsewhere in the county.

Once you’re well-fed and adequately lubricated, Callicoon’s quirky stores make for a fun few hours of shopping. Litt sells vintage furnishings and creative gifts, Spruce is a one-stop-shop for everything like fancy cheeses and lux linens, and the Antique Center has three floors of gently used hidden gems. Outdoor adventurers can skip the stores and head straight to the Delaware River for fishing, swimming, and kayaking. 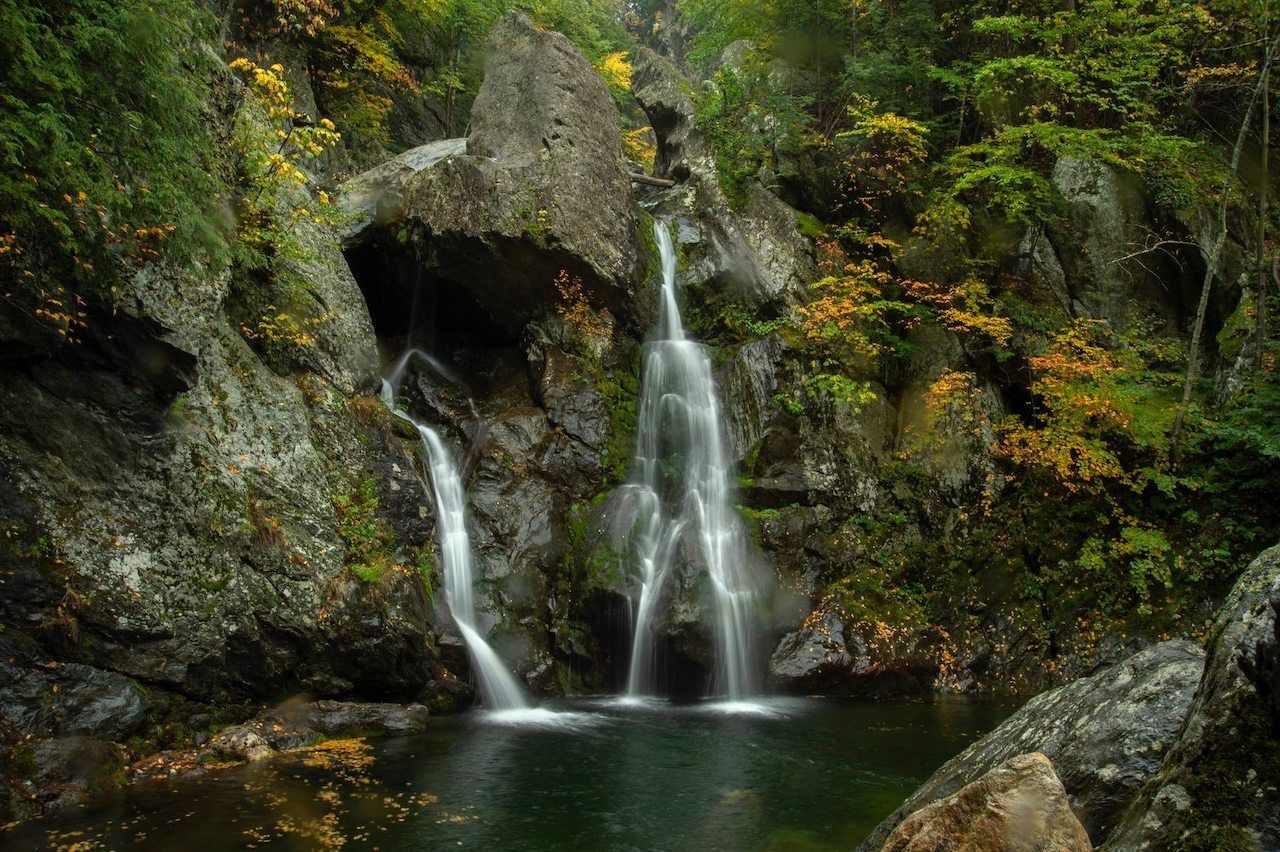 Bethel might be a ghost town in winter, but between May and September, the rolling hills and swimmable lakes overflow with transplants seeking summer refuge. White Lake and Kauneonga Lake, two boat-friendly spots connected by a channel, get the most attention. Here, you’ll find Java Love (the tastiest coffee for miles around), Candy Cone (an old-school ice-cream counter), and Benji & Jake’s (a local staple serving wood-fired pizza, craft beer, and strong cocktails with lake-front views). If you’re looking to swim, head to the beach at Lake Superior State Park — a family-friendly spot that’s open to the public.

Boomers and those who love them will remember Bethel as the site of Woodstock in 1969 — a three-day festival that shaped the musical tastes and social consciousness of a generation. The site, listed on the National Register of Historic Places, is now part of the Bethel Woods Center for the Arts, an outdoor venue that draws sizable crowds to its summer concerts.

Although Woodstock is a distant memory, hippiedom remains a cornerstone of the local culture. It’s no wonder the long-haired hipsters who recently rediscovered Sullivan County resemble the long-haired hippies who came before them. History, it seems, really does repeat itself.