For a surfer, arriving in Raglan is a revelation. You might ask yourself why you thought of New Zealand mainly as a hiking destination. Or you might wonder why Australia gets so much surf attention. Strolling through the bohemian surf town, gazing at the endless sand of Ngarunui Beach, or catching a left-hander that goes on forever at Manu Bay, you might just decide to move to Raglan.

Charlie and Erin Young did just that. They came to Raglan, located on the west coast of New Zealand’s North Island, for a month-long trip, planning to drive a camper van to the country’s main surf spots before returning to California. Their van ended up parked in the driveway of a friend they made on their first day, and Charlie and Erin opted to stay in Raglan — permanently. That was 21 years ago.

“We fell in love with this community,” said Charlie, whose terminology by now sounds more Kiwi than SoCal. He added, “It’s a fairybook place, really.”

Not long after that, Charlie and Erin opened the Raglan Surf School, the first surf school in New Zealand. “People thought we were mad. Raglan was a sleepy town at the time,” said Charlie.

What’s crazy is the idea that there wasn’t a surf school in Raglan before then. There are eight surf schools in Raglan now, a few of them belonging to former instructors of the Raglan Surf School. And Raglan is slowly getting the attention of surfers from around the world.

The surfing is awesome. 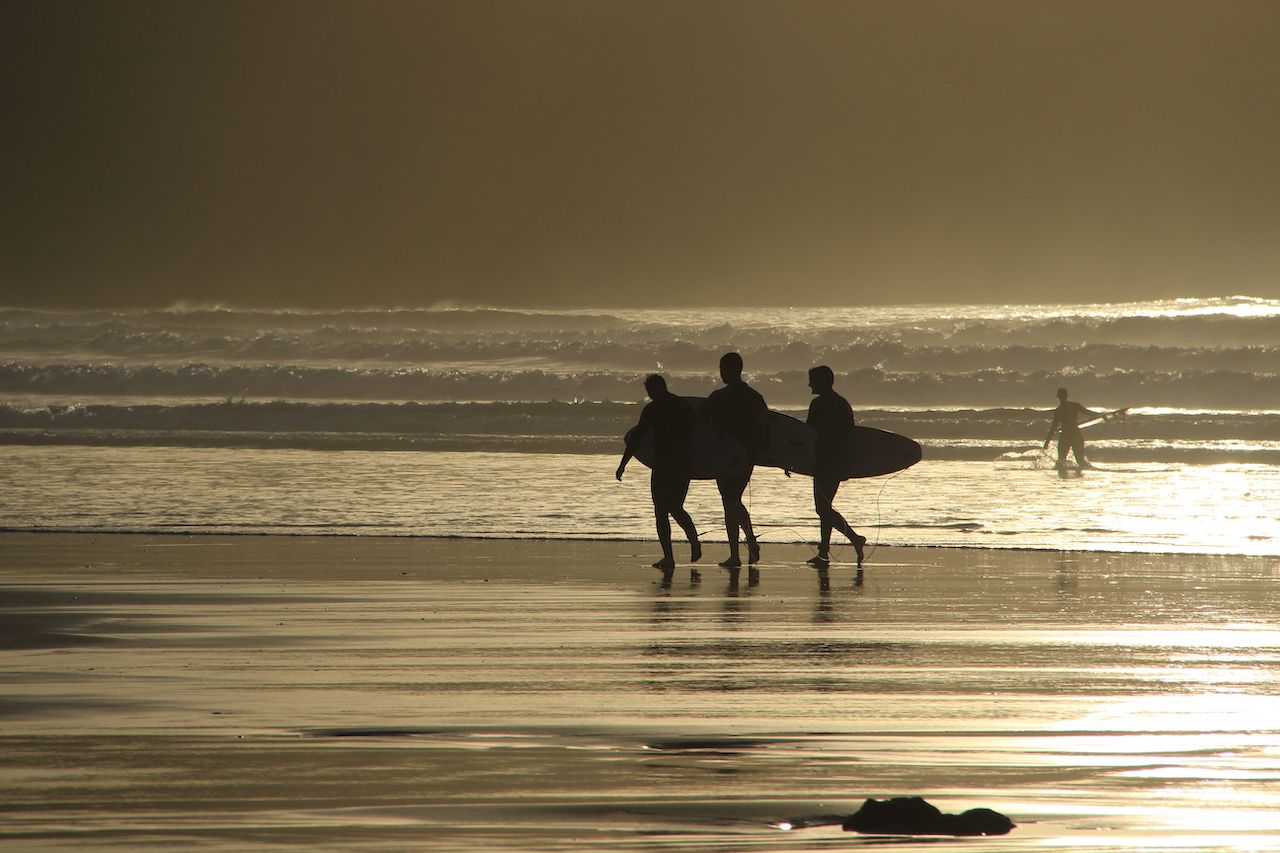 What first attracts surfers to Raglan are the waves themselves. The left-hander that seems to go on forever at Manu Bay was memorialized in Endless Summer. The surf spots Indicators and Whale Bay are just beyond Manu Bay; given the rocks there, though, they’re best left to experienced surfers. On big days, waves can connect all the way from Indicators to Manu Bay.

Shortboarders looking for a steep, hollow wave will be stoked at Ruapuke. Just note that, even in friendly New Zealand, locals can get a little possessive of their home break. At the other end of the spectrum, if you’re just learning to surf, there’s hardly a better place to do so than at Ngarunui Beach, with its gentle rollers and easy shoulders for when you get good enough to ride the wave down the line. You’ll find plenty of take-off spots too, so you won’t have to battle it out with other surfers.

Not only is Raglan packed with good surf spots for every experience level, but it also has waves all year. While other surf destinations around the world may depend on winter storms or summer swells, Raglan never really has a down period. As Charlie sees it, New Zealand is a “wave machine.”

“You’ve got the heat of Australia and the freezing cold of Antarctica,” explained Charlie. “When they meet, things happen.” He said year-round storm systems generate waves in every season, adding that he’s been able to surf on every calendar day of the year.

In New Zealand’s warmer months from January to March, you get the bonus of warm weather, although swells are usually not as big. If you’re looking for powerful waves, and don’t mind 50-degree days, winter is the time to visit.

Nina Du Niak, an instructor with the Raglan Surf School who hails from the Pyrenees Mountain region in France, said that winter waves are simply nonstop — with back-to-back swells bringing waves every single day.

“Sometimes you stop surfing because you’re just too tired.” said Nina. “People ask, ‘Why are you not out there”?’ I say, ‘Because I surfed every day since three weeks [sic] and I can’t move my arms anymore.’ I’ve never had that before. That’s special.”

The location is beautiful. 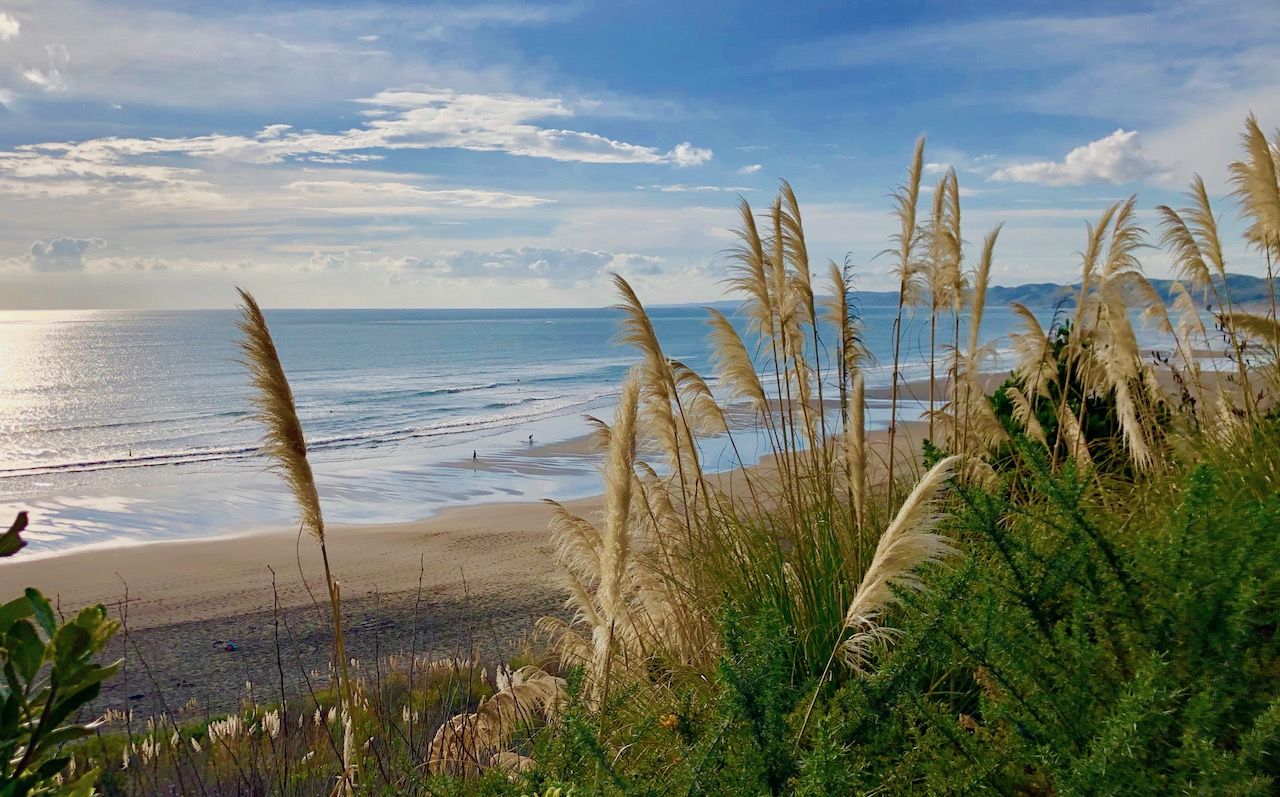 Besides its consistent waves, Raglan is just beautiful. Green mountains meet the sea, sometimes in vast beaches and sometimes in small sandy coves. When you’re in the water on your board, the beach and the hills behind it seem to extend up the coast forever. Those hills are decorated with the ivory-hued plumes of the toetoe plant, which sways lazily in the breeze.

Due east of the surf spots, the town of Raglan itself spreads across two small peninsulas that are themselves inside a fjord-like inlet — so that the town is surrounded by water and hills. Because the town’s in the fjord, the sea there is calm, and massive tide changes create and erase expansive black-sand beaches every day.

Late afternoon bathes Raglan in a golden light, with quiet silhouettes of people rowing down the watery fingers of the fjord, kids riding bicycles, boys and girls passing soccer balls on massive grassy fields, and skaters trying new tricks at a skateboard park on the water’s edge — with rolling hills in the background, just for good measure. The scene is at once serene, sporty, and stunning. 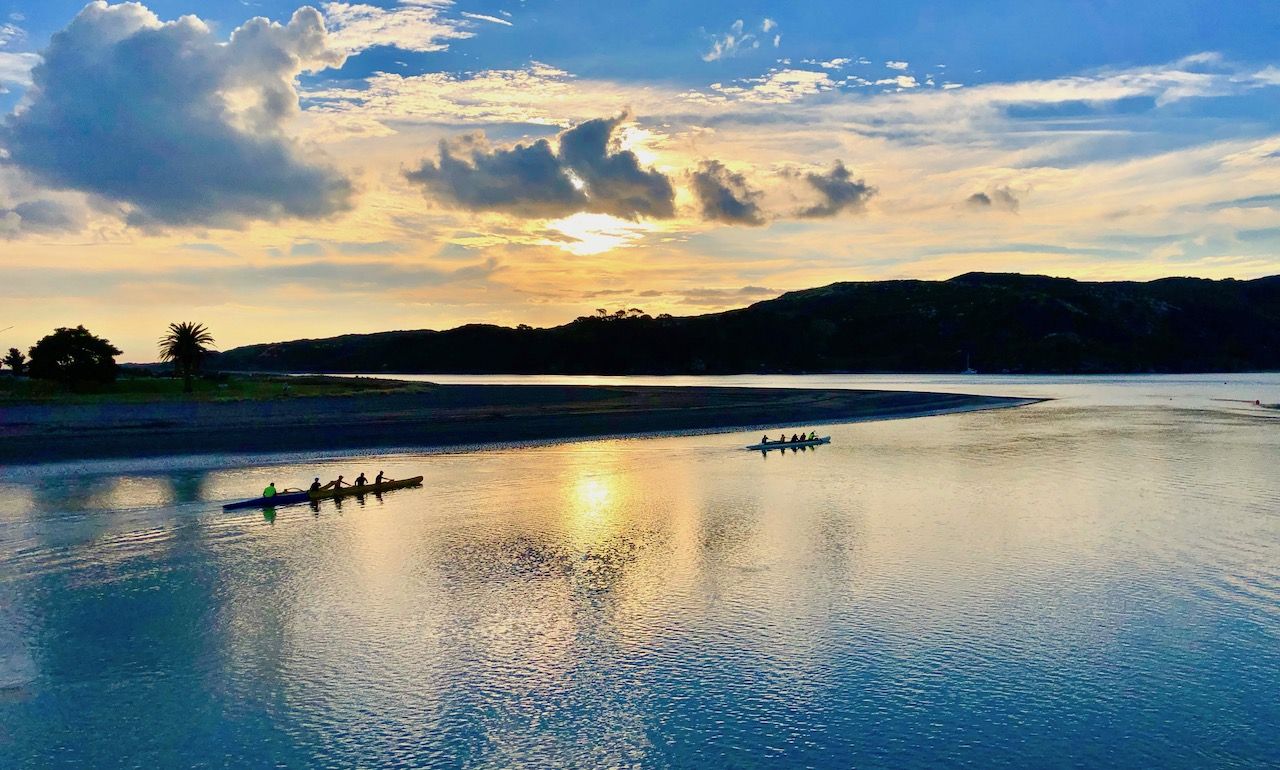 Raglan is chill. Surf shops like the Raglan Surf Emporium may have an intimidating coolness when you first peek in, what with its posters of big-name surfers and, in front of them, toned shopkeepers pushing back the sun-bleached hair from their eyes. But this is New Zealand, and attitude is hard to find. The folks who are in Raglan are happy they’re there and they make you feel happy to be there too.

Beyond the surf shops are a handful of artsy boutiques like the Kanuka Design Gallery and Ulo, yoga studios, the Wrong skateboard shop, and an organic grocer called The Herbal Dispensary. Restaurants include the Rock-it Kitchen and the Wallis Bistro, while George’s Beach Club is a good spot for a beer outside and the Yot Club is the place to hear music. And then there’s The Shack, an airy coffee shop that seems to be a central meeting point in Raglan.

While restaurants keep opening up, hotels are in much shorter supply, with little more than a backpacker hostel and apartments for rent. That said, over a quarter of Raglan’s homes are listed on Airbnb. While that’s good for visitors, it puts pressure on the rental market, according to Charlie. Combined with Raglan’s rising real estate prices, young families are being replaced by older, more moneyed surfers, he said. 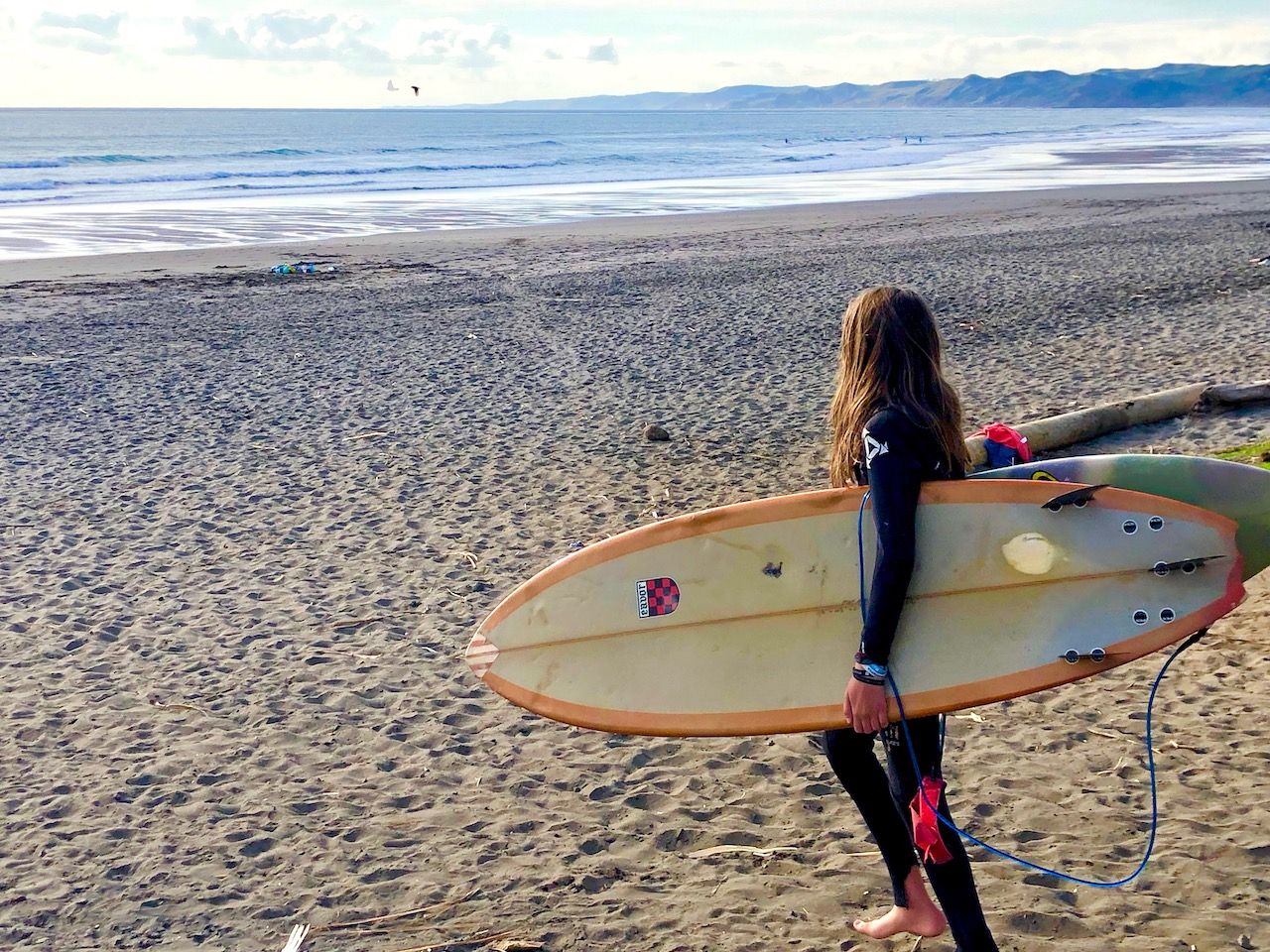 Despite the changes, Charlie said that “the town still retains a chunk of its soul.” He said the community has come together in a group called Raglan Naturally to devise ways to manage the changes, adding that plans which are good for residents will be great for visitors, too.

As Charlie sees it, Raglan has world-class waves, art, music, skateboarding, and a “full-on Kiwi vibe.” There’s no doubt in his mind that it’s a must-stop destination if you’re a surfer. There’s no doubt in this surfer’s mind about that, either — nor in the minds of surfers I know who’ve recently traded their native Kauai for Raglan or who, more understandably, left Cornwall for this enchanting surf town.

Nina, the surf instructor from France, lives in Raglan with her Irish boyfriend. For her, Raglan still has a vibe that you don’t find in many other places anymore. Not that Nina was around back then, but for her, the undiscovered aura of the place harkens back to an earlier time.

If surfing back in the 1970s meant big, beautiful beaches with very few people; a small town with a handful of restaurants and bars; friendly, welcoming locals; and surfing uncrowded waves day after day, then yes. Raglan feels just like that.

Surfing2019 Is the Year To Finally Try Surfing. Here’s Where To Do It.
Tagged
Beaches and Islands Surfing Trip Planning
What did you think of this story?
Meh
Good
Awesome