There is a place in the middle of a Caribbean bay where relaxation meets responsibility, conservation meets cocktails. Oh, and there are tacos. Really delicious tacos.

The floating cocktail and taco bar, Lime Out VI, opened in March of 2019 in St. John’s Hansen Bay in the US Virgin Islands. The structure rests on pontoons, and was custom built by co-owners Dylan Buchalter, Dane Tarr, and Chelsea and Richard Baranowski (who also own Lime Inn on St. John). Lime Out VI is only accessible by pulling up your boat or by swimming from your boat to the bar, where you can eat and drink at the swim up bar or on the floats that surround Lime Out.

Since its opening, it has quickly become a popular destination for travelers to the US Virgin Islands. But it’s more than just a great place to get tacos and cocktails. One of Lime Out VI’s top priorities is to preserve the beautiful environment it’s lucky enough to call home.

“From our standpoint, Lime Out is not a novelty,” says Chelsea Baranowski. “Being environmentally minded is a necessity moving forward. It is not a trend or a fad, it is a reality. Everything that humans do should involve the conservation of the environment. We look forward to progress in awareness, to development in technology of sustainability practices, and to continuing to promote environmental consciousness in our lives and in our business.”

The Baranowskis and other co-owners approach sustainability in a number of ways. Rather than serving the freshly squeezed, locally inspired cocktails in disposable cups, Lime Out uses Corkcicle cups for all of its drinks. Visitors put down a deposit on a cup when they place their order, and can return the cup at the end of the day for a full refund or keep it as a souvenir. Guests can also BYOC (bring your own cup). Bottom line: no disposable cups and absolutely no straws, which were banned on the US Virgin Islands as of October 1, 2019. 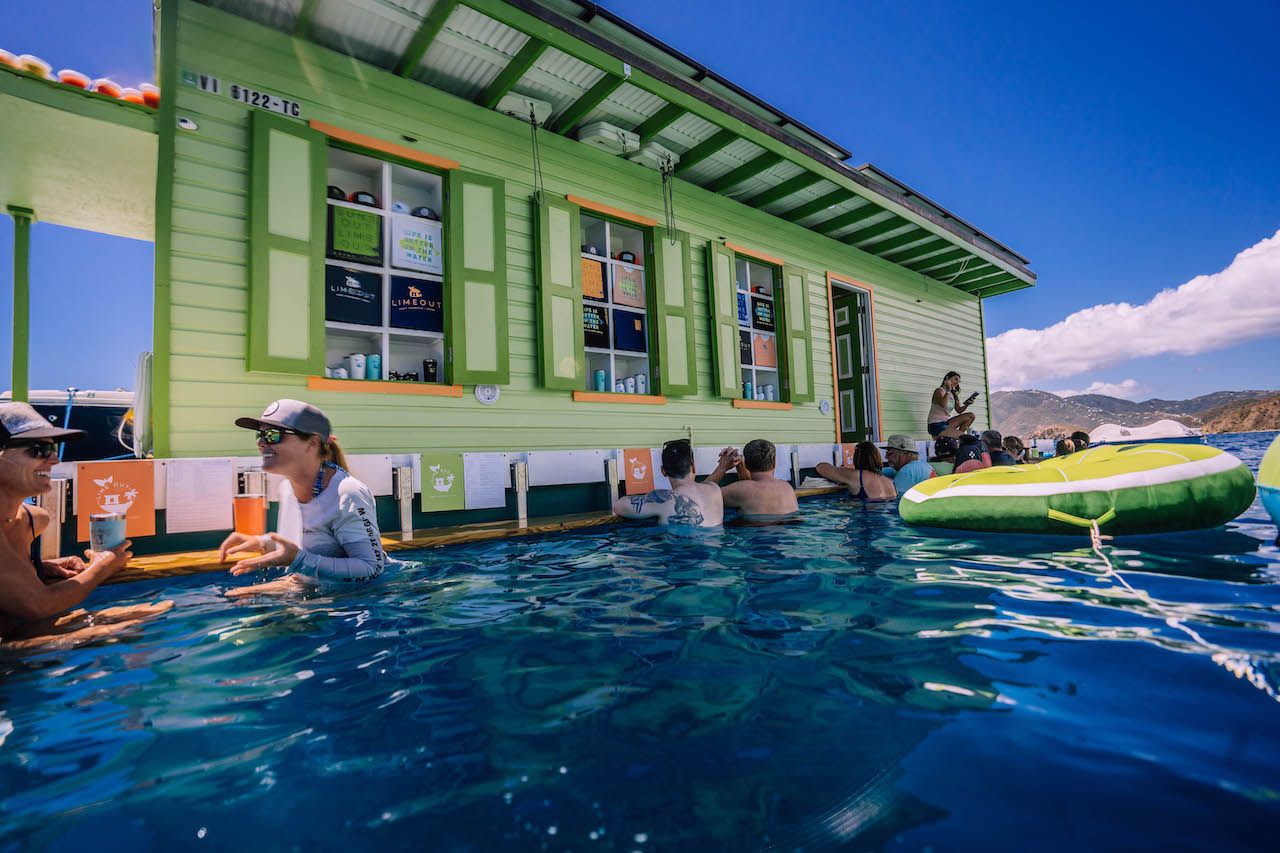 Tuesday through Sunday, from October to July, you’ll find the Baranowskis manning the ship. If you spy Chelsea with a Corkcicle in hand, there is a good chance it contains her favorite cocktail on the menu, The Danger. Named after their son, it’s a blend of Thai chili-infused tequila, freshly squeezed watermelon and lime juices, and pineapple simple syrup. Other cocktails on the menu, all of which are $12, feature a lot of fresh squeezed juice, rum, and tequila. Tropical drinks are always refreshing, but they taste even better when you don’t have to worry about seeing discarded plastic cups floating by.

On the food front, Lime Out has a range of tacos filled with ingredients like freshly caught ceviche, rum ribs, and green curry chicken. Since all you need to dive into a taco is your bare hands, Lime Out is utensil-free. Hungry guests can have their orders delivered to their boat, dine on the colorful floating mats and couch floats that surround Lime Out, or tie up their kayak and eat at the swim-up bar. To further minimize the environmental impact of its food, tacos are served in compostable taco trays, which break down quickly compared to other take-away containers. 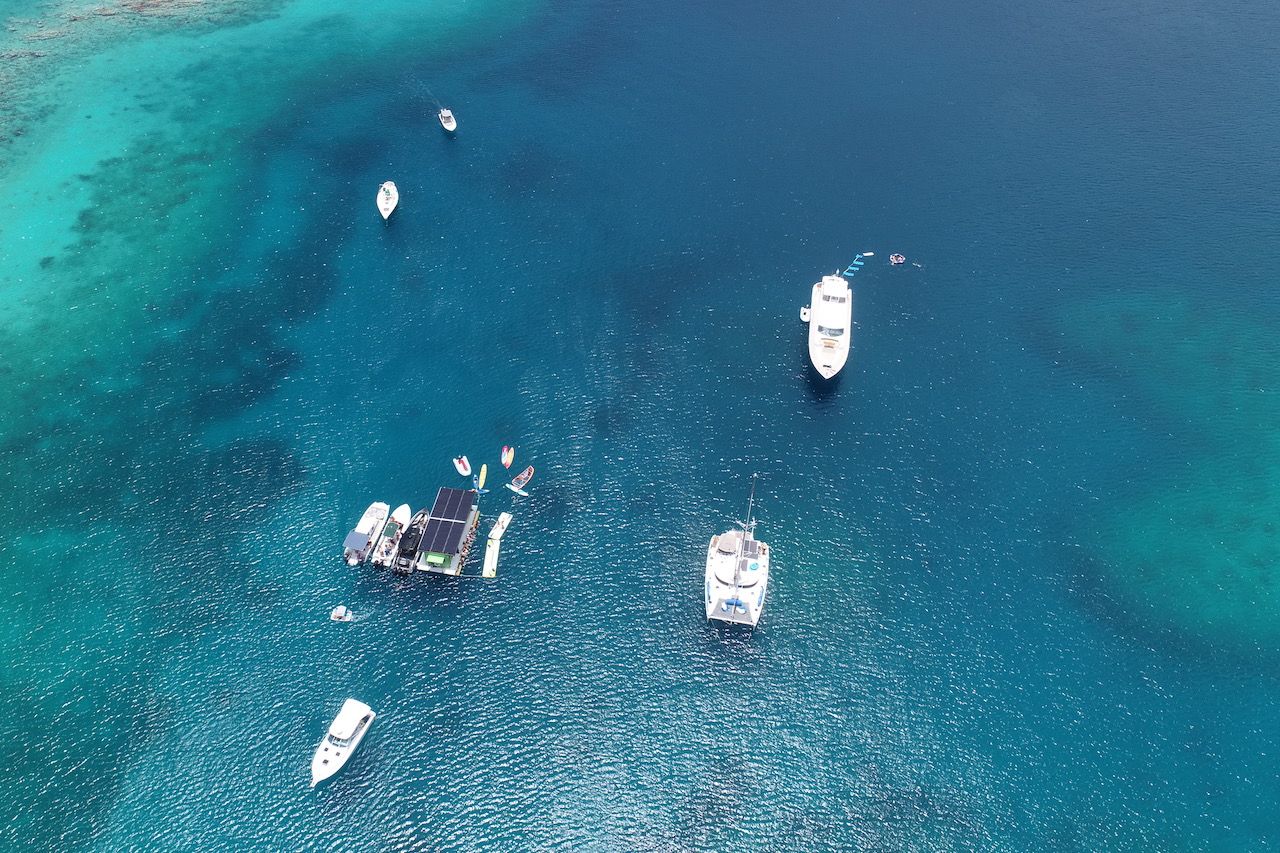 Lime Out isn’t alone. Its team members are also involved in other local sustainability efforts. Lime Out partner Valerie Tarr is active with Island Green Living, an organization whose mission is to transform the US Virgin islands into a net zero waste, carbon-neutral territory. The group’s ReSource Depot has repurposed nearly 30,000 pounds of salvageable building material, furniture, and other household items. Next up is the construction of a solar-powered Sustainable Living Center for the island. It will include facilities for recycling glass, plastic, and used cooking oil, as well as a co-op food market and garden. There are also plans for an on-island composting center, which the Lime Out team is anxious to get in place.

The US Virgin Islands as a whole is making strides to protect the environment. The islands started off the new decade with a ban in place for all toxic sunscreens. Effective January 1, 2020, any sunscreens containing oxybenzone, octinoxate, and octocrylene are prohibited. These three ingredients are known to impair the growth of green algae, decrease fertility in fish, damage and destroy coral, and cause defects in marine life.

As part of the ban, stores on the islands are prohibited from stocking the banned sunscreens and visitors and locals may not use or possess them. Since there is technically no sunscreen that is “reef-safe,” locals like the Lime Out team encourage covering up with clothing to reduce sunscreen use all together.

With a floating, green, taco-and-cocktail-filled platform to advocate for the environment, Lime Out is a sustainable business model in the region that proves that when cocktails meet conservation, we all win.

SustainabilityYour 2022 Resolution: Travel To Save the Planet
Tagged
Food + Drink Restaurants + Bars Sustainability
What did you think of this story?
Meh
Good
Awesome