On his YouTube channel Outdoor Chef Life, Taku Kondo is the paragon of a California adventurer, foraging for spiky purple sea urchin in tide pools and preparing eel and crab sushi for an oceanside picnic. The 30-year-old sushi chef chronicles his foraging adventures across the United States and beyond—and he’s found an audience that relishes learning how to eat seafood sustainably, straight from the ocean to your plate.

Kondo launched his project back in May of 2018, way before a global pandemic altered life as we know it, while working at Hinata, an upscale sushi restaurant in San Francisco. Spending his weekends foraging around the city, he eventually resolved to quit his job and forage full time — if he hit 200,000 subscribers on Youtube. He reached his goal in 2019 and, today, Outdoor Chef Life, which has 517,000 subscribers, is Kondo’s main professional focus.

“I go out in nature, I go fishing and foraging on the coast and in the woods and harvest what is around,” explains Kondo. “I then create a dish using those ingredients.” Dishes he’s prepared on his channel include a colorful seafood paella, a spicy lingcod sandwich and a kelp burger, all cooked with ingredients sourced directly from the ocean and forests he’s visiting — and usually cooked on site too (rather than in a professional or home kitchen).

In the age of social media and the always online generation, live footage of folks sourcing their own ingredients and cooking them on camera isn’t an original concept. But it’s the scope of Kondo’s videos that sets him apart from the rest. Kondo sheds light on the cooking process in its entirety: the catching of the fish, the filleting and the cooking, all the while showcasing the areas perfect for foraging, which mainly consist of California’s coast but also include Hawaii, Japan and Thailand. 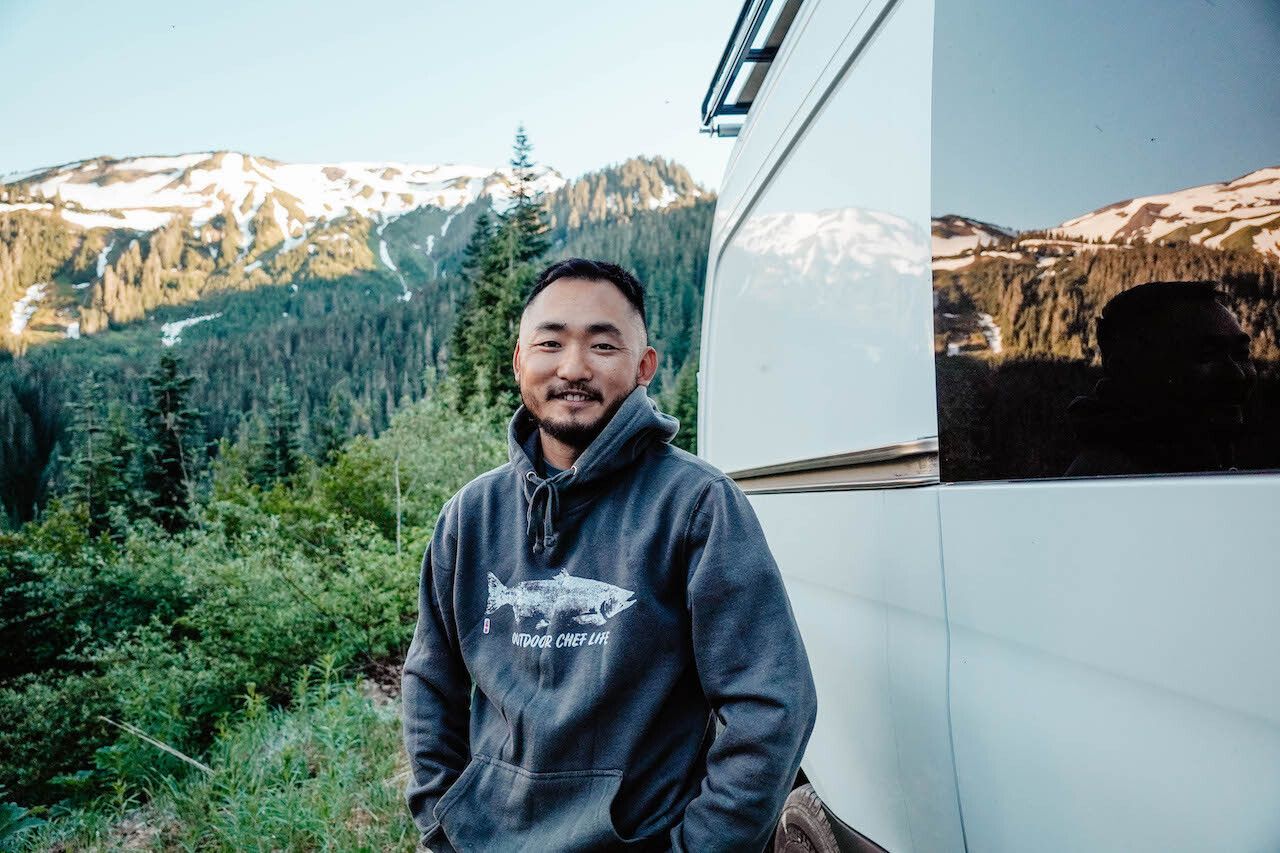 Most recently, the chef visited Alaska, where he’s been for a month. “I converted a sprinter van into a little RV, I put a kitchen and a bathroom and a bed in there and [drove] it to Alaska,” he says.

Kondo credits his success on Youtube to his expertise as a chef. “A big part of my videos is the cooking portion so being a sushi chef and having those skills really took my videos to the next level,” he says. “People don’t realize the potential of what a fresh ingredient can do. [The ingredients I use] are not from the store. They’re all right here in front of us and we can turn them into a dish that would be considered for a menu in a restaurant and that is what people love about my videos. They see what is possible.”

Kondo’s interest in natural ingredient sourcing was sparked by a reading of The Bay Area Forager, by Mia Andler and Kevin Feinstein, which he delved into while in college at San Francisco State. Among the tricks of the trade is the acknowledgement that where you go affects where you eat, which is why Kondo’s selection of destinations is of utmost importance.

​”I select areas based on what is available there and what I can harvest,” he explains. “My main focus is on coastal areas [where I can find] seafood and shellfish.”

Once he arrives in a certain city, he relies on the local community and his YouTube fanbase to tell him about the best places to go fishing and more.

“Every time I go somewhere and post it on Instagram or Youtube, people reach out in that area to let me know they live there and I should go fishing here or there,” he says.

Those followers also tend to chime in on Kondo’s travel plans, suggesting where he should consider visiting next. For now, New Zealand remains his dream stop.

“It would be an amazing place to go to because I love sea urchins and they have a ton of it there,” he says. “Anybody from New Zealand that comments on my videos tells me how big the sea urchins are there.” 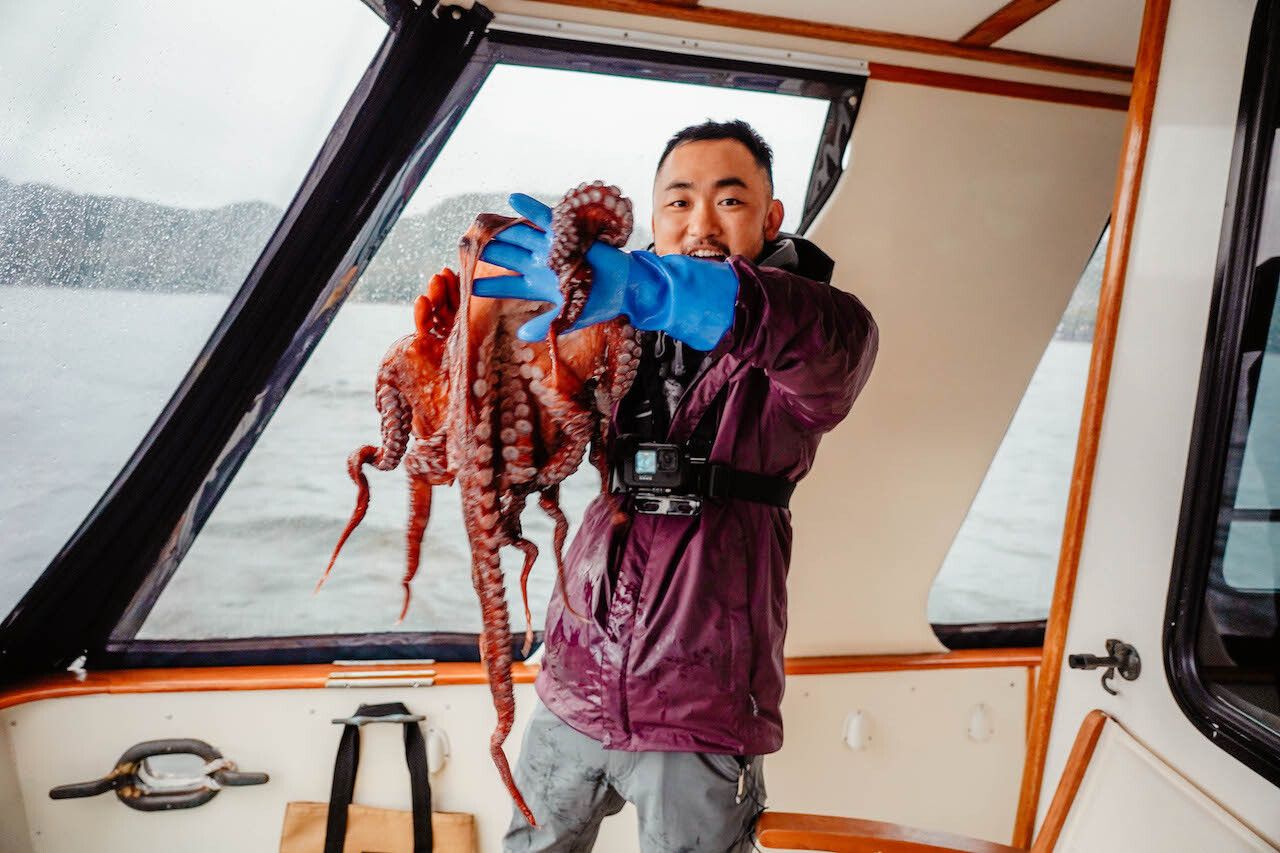 That’s the other thing about Outdoor Chef Life: it’s not just about foraging and food, but also about traveling. When watching Kondo’s videos, one can’t help but start day-dreaming about day trips to coastal California or Hawaii, vacations peppered by foraging trips that can mirror the ones taken by Kondo on camera. The chef has been able to marry two passions that people around the world share: traveling and eating, simultaneously educating us on the importance of sustainability and eco-friendly cooking techniques.

Of course, that changed in the past year, when Kondo himself wasn’t able to travel in a world plagued by COVID-19—but he hopes that will soon change, especially given his new RV.

“I hope I can pry people to get out,” he says. “When you go out and harvest your own food, you become more knowledgeable about the environment and start caring more about these areas.”

May 18, 2022 Jori Ayers
✖
travelstoke
Download the mobile app
stoked by