Fifteen years ago, Bart van Olphen embarked on a journey that would change his entire outlook on food. The Netherlands native had been working in Michelin-starred restaurants like Lucas Carton in Paris, where preparing and working with fish quickly became his culinary obsession. But van Olphen felt conflicted about the way the fish he prepared were being sourced, and he began to feel that eating fish wouldn’t be sustainable in the long term.

When he learned that 80 percent of the planet’s fish stocks are overfished, he realized that means there’s another 20 percent of fish which are so well managed their stocks aren’t depleted. He wanted to find the people who worked on these well-managed fishing grounds, so he traveled around southern Europe, to places like Spain, Portugal, and France. On his trip, he began to appreciate the production process more, from ocean to fishing boat to factory. Soon, van Olphen realized that tinned fish could be the future of sustainable seafood consumption.

Though van Olphen knew of tinned fish, he had never thought of it as an ingredient that any serious cook, professional or otherwise, might consider an essential element in their arsenal. In fact, what first attracted him to the tinned fish of southern Europe were the beautiful labels. But one of van Olphen’s most important moments of clarity came while visiting a fishery in Portugal. The sardines came in off the boats, and two hours later they were already in the cans.

“If we only eat fish on the day of catch, or say 10 days later, this concentrated time frame causes overfishing,” he says. “But if we embrace preserved fish like frozen or canned fish, we could enjoy fish throughout the year. We would leave the fish stocks alone when they need to recover.” 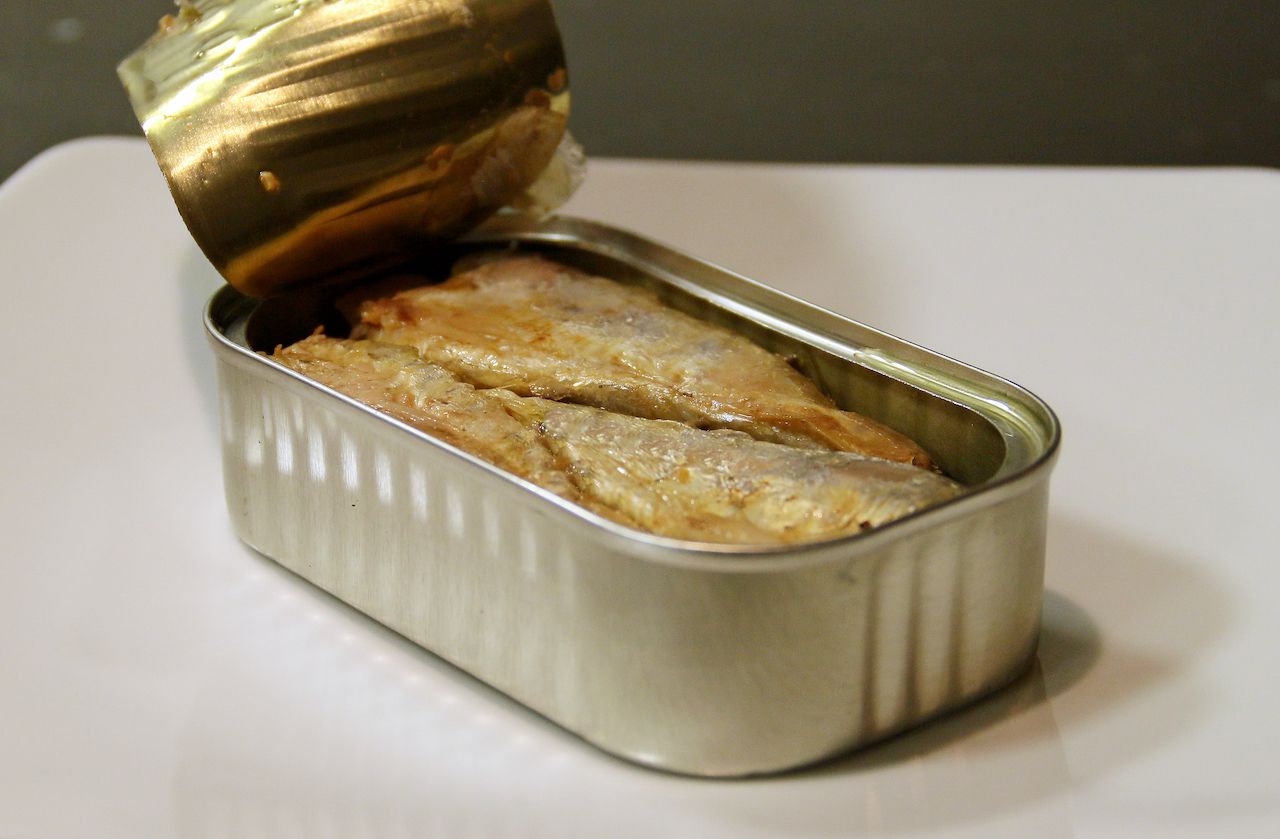 Van Olphen has been studying sustainable seafood since 2005. Over the years, he’s published books on the subject, including his latest, The Tinned Fish Cookbook, and has co-founded a tinned fish company called Fish Tales. But he says that it’s only in the past decade that people have begun asking the same questions that first popped into his mind while watching those sardines get processed in Portugal. Consumers, he says, are becoming more aware of how their dietary choices might be harming the oceans.

“People are starting more and more to ask me questions,” he says. “Like, ‘I love to eat seafood, but I want to make sure that I contribute to better oceans. What choice do I need to make?’ Because once the oceans are depleted, it never comes back again.”

Here’s what van Olphen says you should look for if you’re in the market for sustainable tinned fish.

Check out the labels

According to van Olphen, around 50 percent of the fish you find at the grocery store and restaurants is fish farmed using aquaculture. Though it takes some pressure off of wild stocks, aquaculture poses its own threats to the environment.

Tinned fish, on the other hand, is almost exclusively wild caught. And that’s not necessarily a bad thing, because if you’re buying canned or tinned fish with the Marine Stewardship Council (MSC) label, you can rest assured it’s being fished using methods that aren’t depleting the oceans.

“The Marine Stewardship Council label is based on three principles,” van Olphen explains. “First one, the fish population should be healthy. The second principle is [based on] the fishing method — it shouldn’t harm nature, so there should be preferably no by-catch. And the third one is that the fishery is well managed, so the fish [population] is counted.”

He warns that these MSC principles don’t measure quality, but for the environmentally conscious consumer, it’s reassuring to know that the population of fish species inside the tin is healthy and the fisheries are well looked after.

Canned tuna might be one of the most familiar types of tinned fish on the market today, but tuna fishing poses among the most egregious risks to our oceans. One 2015 study found that StarKist, for instance, sourced its tuna from fisheries that rely on longlines, which results in destructive levels of bycatch. The study concluded that “80 percent of the tuna sold in the US comes from unsustainable, destructive sources.”

“There are many tuna stocks which are over exploited and the fish stocks are depleted,” adds van Olphen.

Van Olphen goes on to explain that corporate canned tuna companies often rely on industrial fishing boats that use longlines or the purse seine fishing method, which entails using a large net to envelop huge schools of tuna at once and can also result in bycatch. To support sustainable fishing, make sure you’re buying from companies that use only the pole and line fishing method. Not only does pole and line fishing result in zero bycatch because only one fish can be caught at a time, but it’s the preferred method of local fishermen in countries like Indonesia and the Maldives.

“Not only from a marine biology standpoint should you support pole and line, but especially to support local [fishing] communities, pole and line is the best choice to make,” van Olphen says.

The species of tuna that you buy, whether it’s canned or not, matters, too. In the US, one of the most in-demand species of tuna is albacore, and its popularity as a food source has driven the population to “near threatened” status. To take pressure off albacore, van Olphen says demand should shift to skipjack tuna, the most abundant species of tuna in the oceans right now. But it bears repeating that even if consumers do switch to skipjack tuna, they should only buy MSC-approved brands that use pole and line fishing methods so that skipjack aren’t eventually overfished as well.

The benefits of tinned fish go beyond protecting overfished tuna and promoting sustainable fishing methods. Tinned fish doesn’t need to be stored in the fridge, it lasts for up to four years, and there’s very little waste involved in the consumption because everything inside the can is edible.

The production methods are efficient as well, van Olphen adds. Take tuna fishermen in Maldives, who van Olphen has spent many years observing. They start fishing around six in the morning. As soon as the fish are on board, they’re preserved with ice. By 11:00 AM, the fish arrive at the factory to be cleaned, and by 3:00 PM the fish are being canned.

This isn’t always the case with bigger brands, however, where the fish may go through a complex web of freezers and international flights before arriving at the factory to be canned. 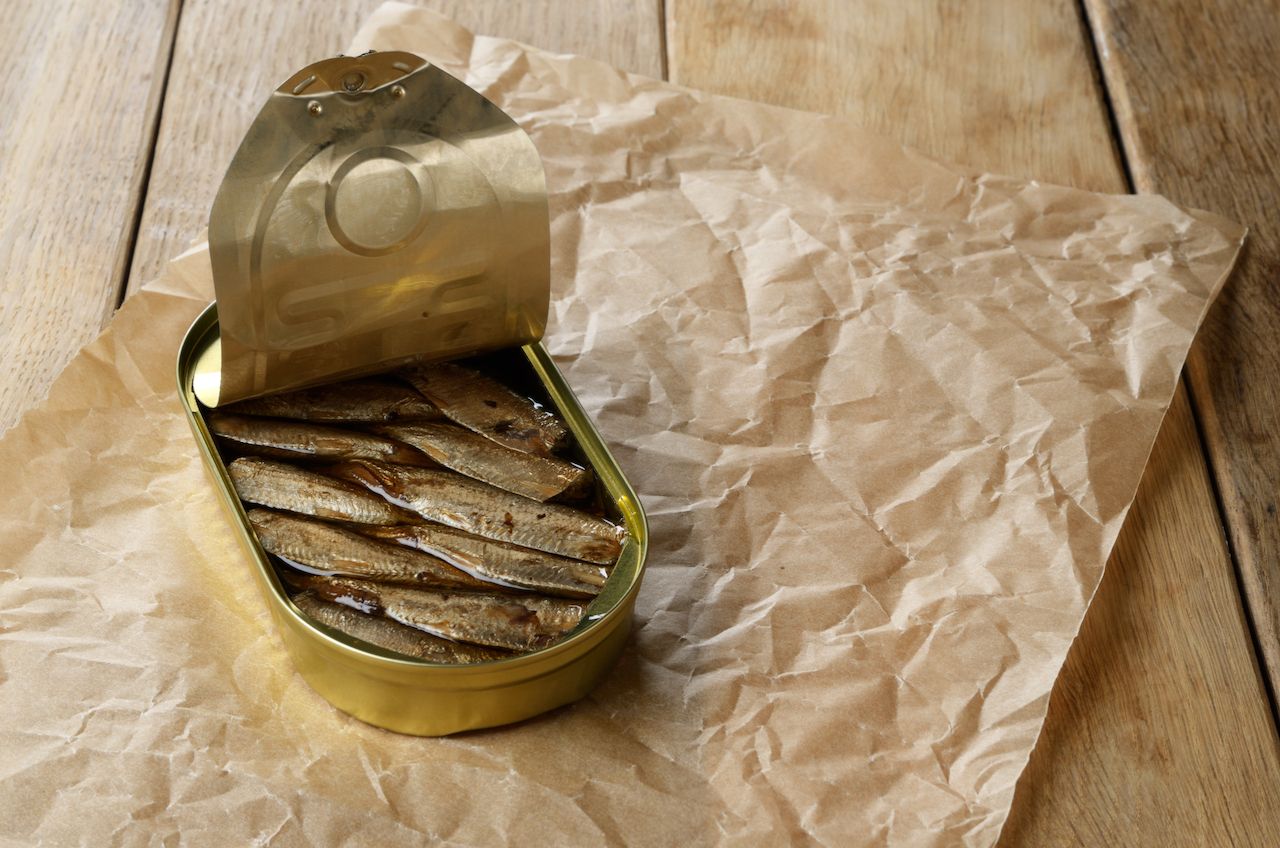 One reason fish is in demand is that it’s packed with omega-3 fatty acids, which are highly nutritious vitamins that have been shown to benefit heart and eye health, lower blood pressure, and aid in the development of infants during pregnancy. But you won’t lose any of those benefits if you opt to eat tinned fish.

“All these oily fish — sardines, salmon, herring, anchovies, mackerel — they do really well in the tin,” van Olphen says. “Once the tin is closed, all the nutrition will be locked in that tin for the next four years. So it’s a really healthy way of consuming seafood.”

If van Olphen had to pick one, his favorite variety of tinned fish would have to be anchovies. Most people might balk at these tiny silver fish as the slimy topping for caesar salad, but van Olphen promises anchovies are versatile, and tasty too.

“It gives this umami taste, this full flavor, to any sauce, to any salad dressing,” van Olphen says. “Even if you eat a lot of meat, you can add anchovies to chimichurri, or a tomato sauce. In so many different sauces, it gives this extra kick of flavor. Or you can use anchovies on some toast with a glass of wine. And I love to open a can of sardines and just eat them as they are.”

Van Olphen praises the ease with which anyone can create a full meal from tinned fish. Some homecooks might be intimidated by the prospect of frying up an expensive cut of fish (which might not have been sustainably sourced), but tinned fish takes away the stress and uncertainty.

“The fish is cooked. It’s done for you already,” he says. “You add some color, some crunchiness, some spices, some herbs, and in a few minutes you can create all these different meals. It’s amazing. And affordable.”

Food + DrinkHow to eat salmon without hurting the environment
Tagged
Food + Drink Sustainability
What did you think of this story?
Meh
Good
Awesome