Tequila, Mexico, isn’t wildly popular with American tourists, especially when compared with other world-famous spirit regions like Cognac in France or Islay in Scotland. Those who do visit the village of Tequila often visit on bus tours or on the ever-popular roundtrip tequila train operated by Jose Cuervo. Yet doing so means bypassing exploring the village of Tequila itself independently, which is a shame for people looking for a true taste of the region.

Aside from large distilleries like Jose Cuervo’s La Rojena, Tequila still feels like a humble village. There aren’t any Margaritaville franchises littering the landscape. Margaritas aren’t even the signature cocktail here. The Batanga is what you should be drinking.

The Batanga sounds, at first, so unremarkable. Many say it’s just a Cuba Libre with tequila instead of rum. Those in the know swear by it, though. On a visit to Tequila Fortaleza, a distiller making tequila the original way with tahona-crushed agave, we were advised that if we did just one other thing in the village, we should try a Batanga at La Capilla, the most famous bar in town. It was further recommended to get up and stretch between rounds of Batangas. The legend goes that you don’t notice how much you’ve really drunk until you try to stand up. And you’ll want to have multiple rounds. The Batanga has made La Capilla famous the world over and earned it placement on many “best bars” lists. 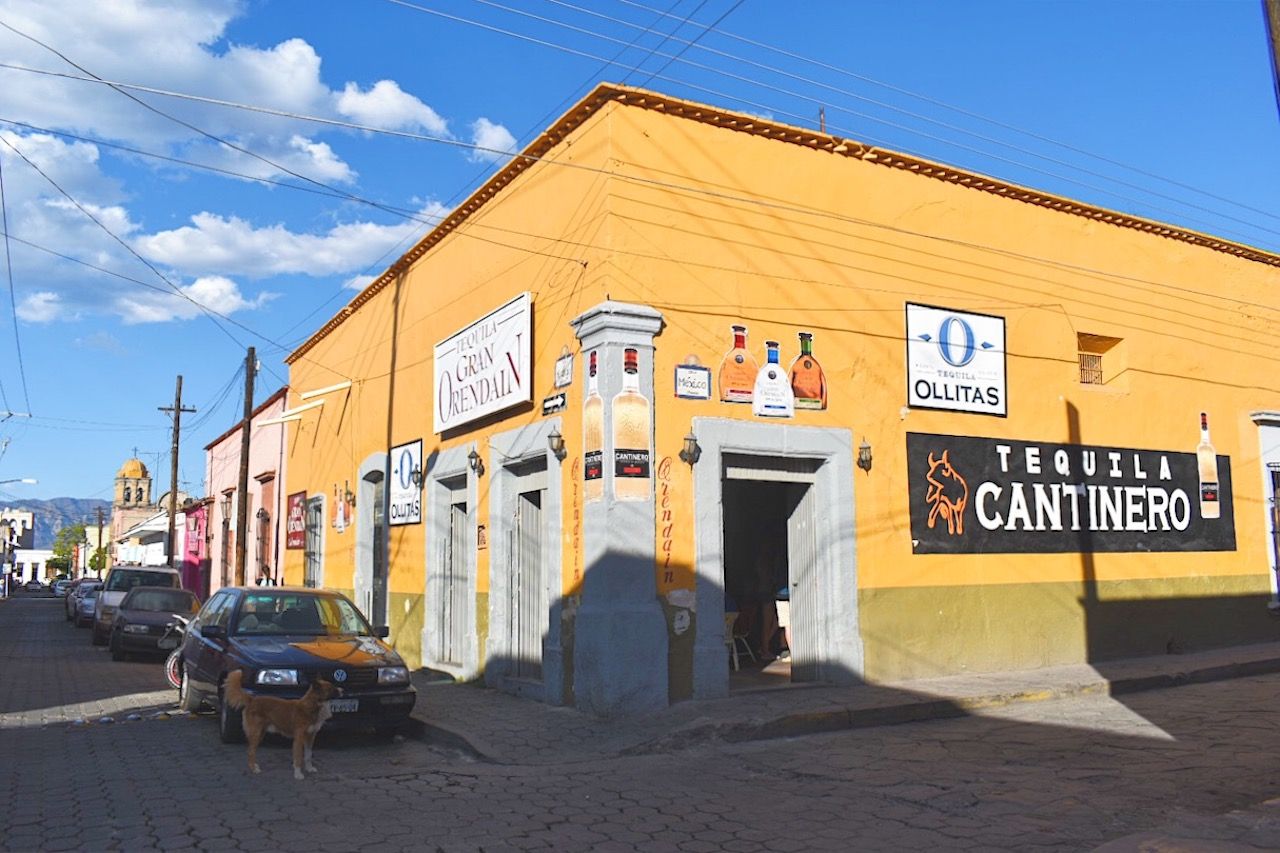 A true Batanga requires some ingredients you can only find in Mexico, and some elements that you can only find at La Capilla. The Coca-Cola has to be Mexican Coke made with cane sugar rather than corn syrup. The tequila has to be the blanco from La Tequileño, which is an inexpensive mix (which means not made with 100 percent agave) that has a noticeable bite that comes through the sweet soda in a Batanga. Then there’s lime and a salt rim. Finally, there’s the not-so-secret ingredient: a quick stir with a well-worn knife.

The Batanga follows the basic principles of a good cocktail: It’s simple, and you can still taste the spirit. Sweet Coke, tart limes, salt, and slightly bitter blanco tequila all balance each other to create a spectrum of flavor. Undoubtedly, part of what’s appealing about the Batanga at La Capilla is the generous amount of tequila in the drink, which fills up about half the glass it’s served in. But then again, any respectable tequila drink should be mostly tequila. The cocktail was invented by the bar owner, Don Javier Delgado Corona, back in 1961. The Margarita was starting to gain popularity around the same time, and general tequila awareness was rising. But while anyone can make a Margarita, only one has the knife used to stir the drinks at La Capilla. Don Javier’s same knife has been used for 60 years. The knife is used not only to stir every Batanga served at the bar, but also to do some light chopping duties for the botanas (snacks) served as well. It’s believed that the residue of limes, cilantro, and jalapeños that the knife has cut over the decades has given the makeshift swizzle stick a unique seasoning.

Heeding the advice of the locals, we tested our buzz after two Batangas and decided that another one was tempting but risky. We didn’t want to drink like amateurs in such a hallowed bar. After all, La Capilla translates to “The Chapel.” We reluctantly went to fix ourselves with excellent steaks at the posh Cuervo-owned Hotel Solar de la Animas. It was the healthy decision, but not necessarily the fun one. 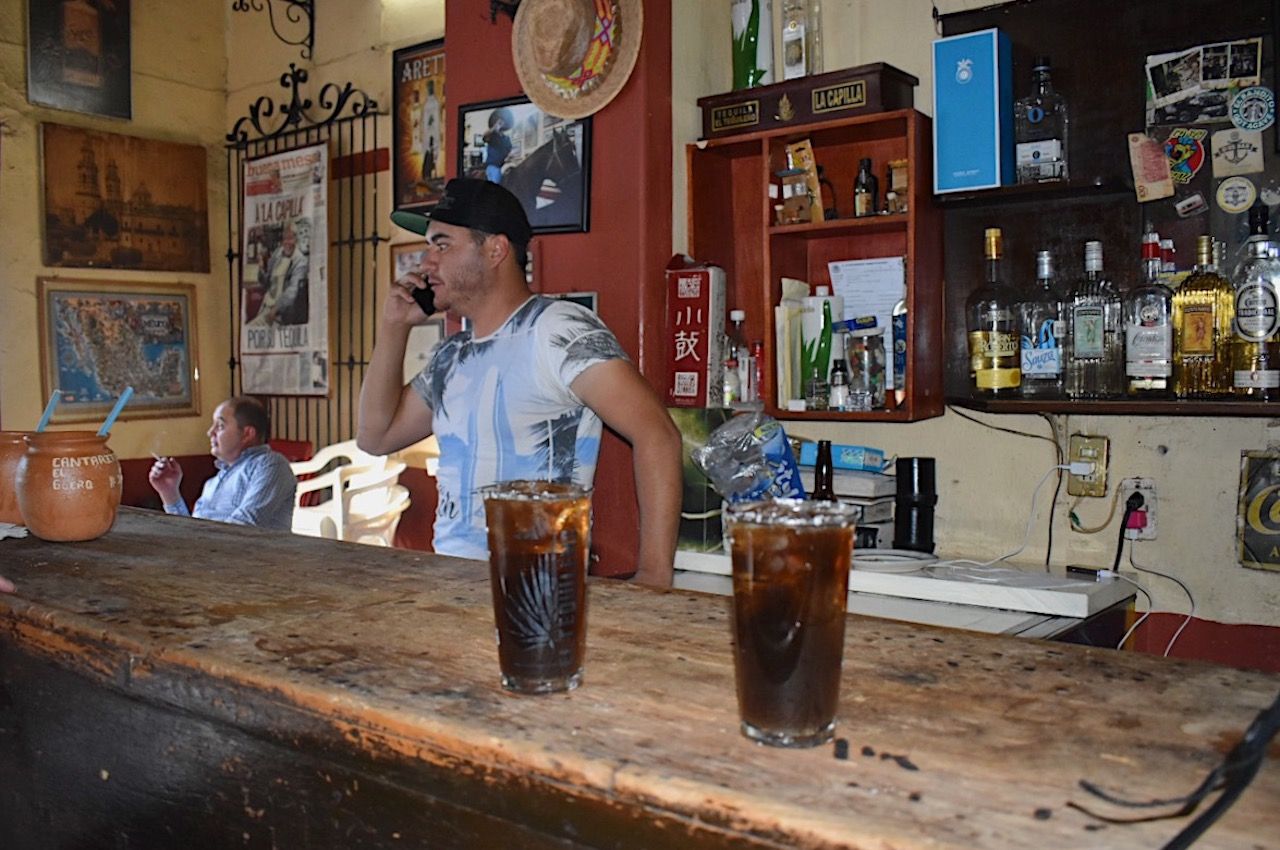 La Capilla’s dusty atmosphere had more of a true cantina feel than any of the old bars that we visited in Guadalajara or Mexico City. It had the warm atmosphere and haphazard decorations of a local dive. It’s the kind of place that keeps mementos as they come, such as photos and postcards celebrating its greatest patrons. One wall was fashioned into a shrine of sorts with old soccer trophies. Keepsakes come, but not much goes. We found it hard to leave the bar ourselves.

Don Javier has stuck around, too, and is now in his 90s. He still tends the bar, and his signature drink is more popular than ever. We’ve started noticing it on cocktail menus north of the border. Unlike the Margarita, the Batanga still hasn’t become internationally famous or launched chain restaurants. This is for the best. No one else could possibly make one like they do at La Capilla, not without the knife.

What It’s Like To Stay in the World’s First Tequila Hotel in Tequila, Mexico

How To Find Drinks, Volcanoes, and Waterfalls in the Tequila Capital of Mexico