It’s a high-snobriety showdown between old money and new. On one side of the ring — or in this case, 61st Street — we have Agnes Van Rhijn (Christine Baranski), a widowed elitist who prefers her social hierarchy with a side of pre-Revolutionary War DNA. On the other, we have George and Bertha Russell (Morgan Spector and Carrie Coon) — a nouveau riche railroad tycoon and his social-climber wife, who use money to get cozy with the city’s upper crust. It’s tons of table settings, tea, and melodramatic dialogue delivered by an absurd number of Tony Award-winning actresses.

The performers, however, often play second fiddle to something even more over-the-top — the set. Magnificent mansions, lush interiors, and brownstone-lined streets are the unscripted stars of every scene. Watching the show feels like taking a tour through old New York.

But what would Edith Wharton think? The 19th-century author portrayed the lives of her contemporary aristocrats in novels like The Age of Innocence; she wrote about their homes in the interior design guide The Decoration of Houses. When compared to her historically accurate works, The Gilded Age occasionally feels phony.

To HBO’s credit, the show does yeoman’s work to recreate a credible depiction of 19th-century New York. Before filming, cast members took lessons on Gilded Age history, etiquette, and diction. Historical figures and circumstances regularly come to life on the screen. Real Gilded Age mansions around New York and Rhode Island make up a portion of the sets. Antique props, including a period-perfect printing press, are featured in nearly every shot.

Still, this isn’t a museum piece — it’s a melodrama. “The real desire (was) to (create) the feeling of what it meant to be wealthy at that time,” Rutgers history professor Erica Armstrong Dunbar recently told Vanity Fair. Dunbar serves as the show’s historical consultant and co-executive producer. Wharton likely wouldn’t be fooled by this prime-time frippery.

If you roam through present-day New York City or nearby Newport — and you know where to look — you might not be fooled, either. Here are a few things The Gilded Age gets wrong about New York City and where to see the remnants of its namesake era.

In episode one, “Never the New”, we learn that old-money aristocrat Agnes van Rhijn lives in a Central Park-adjacent brownstone on the corner of 61st and 5th Avenue overlooking the Russells’ new white-stone fortress.

To place the van Rhijns and the Russells on the same uptown block makes delicious melodrama, but it doesn’t pass a fact check.

Keith Taillon, a researcher, writer, and historian who offers weekly Gilded Age recaps on Instagram, notes in his stories that 61st Street was a “goat-infested wilderness” — not a place for hoity-toity aristocrats. A van Rhijn wouldn’t be caught dead with livestock for neighbors.

In 1882, wealthy brownstoners lived in “chocolate-covered” Murray Hill (as described in Edith Wharton’s memoirs), which started around 23rd Street and 5th Avenue. Even new money had yet to move to 61st Street. Real-life couple William K. Vanderbilt and his wife Alva, to whom the Russells bear resemblances, broke boundaries in 1882 by building an extravagant chateau on 52nd Street — almost half a mile south. But don’t try your luck seeing it — developers razed the mansion in 1927. 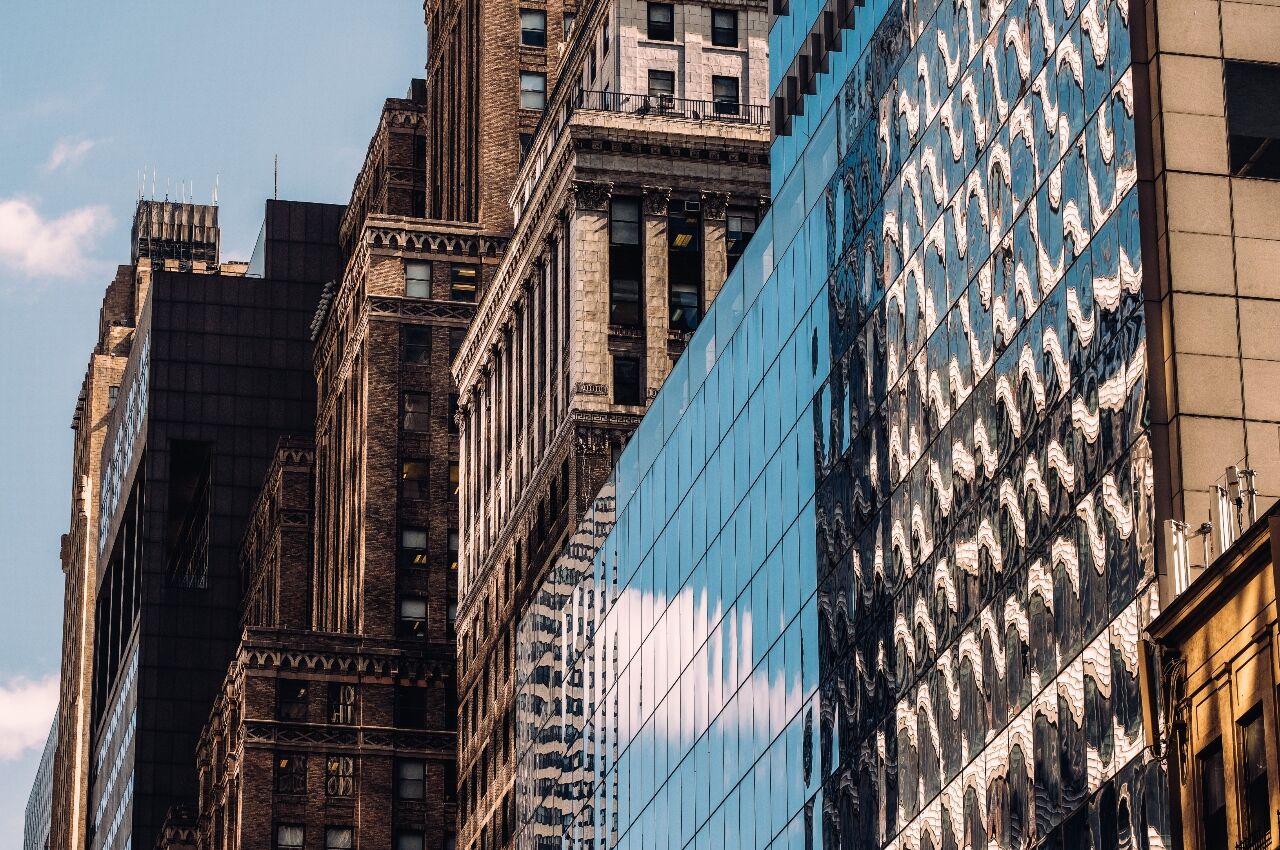 For the milk-chocolate homes of Wharton’s memories, walk west of 3rd Avenue between 35th and 38th Streets to peep homes protected by the Murray Hill Historic District. Many of the area’s buildings, constructed between 1853 and 1910, are similar to where Agnes might’ve lived in 1882. Still, it’s hard to feel transported while walking around — Manhattan’s contemporary skyscrapers poke through the old-world veneer around every corner.

For a skyscraper-free view of brownstones, head instead to Brooklyn Heights — a candy shop for 19th-century architecture buffs. Tour its Gilded Age glory by walking around the Center for Brooklyn History (1881), designed by George B. Post, who’s name-dropped in the show. Next, weave along Pierrepont Street to Columbia Heights, where historic houses are chockablock until you reach the Brooklyn Heights Promenade. Roughly 1,000 of the neighborhood’s homes predate the 20th century.

Aside from a few horse droppings in several street scenes, The Gilded Age makes New York City look cleaner than Disneyland. Even the show’s dirt paths seem to sparkle.

New York might be notorious for its modern-day grime, but it was exceptionally stinky in the 19th century. Even though public uproar over the city’s smells helped create the Department of Street Cleaning in 1881, it wasn’t until 1895 that anyone started actively sweeping streets and collecting garbage.

If you want to find some old-world dirt, take a suggestion from Agnes: “Why don’t we just go outside and roam in the gutter,” she quips about socializing with the Russells. “It will save time.”

The Russell home isn’t entirely real — it’s a collage created with sets, historic rooms, and CGI — and Stanford White isn’t one of the designers.

The ballroom, awash in red velvet curtains and gold trimming, is actually the music room in The Breakers — a Newport, Rhode Island summer house designed by Richard Morris Hunt for Cornelius Vanderbilt II in the 1890s. Mr. Russell’s billiards room is also from The Breakers, and his bedroom is from Marble House (1892), another Hunt-designed home. Both his daughter’s bedroom and the kitchen are from The Elms (1901) — a third Newport mansion. None of these are actual Manhattan residences — they’re all seasonal spots built a decade or more after the show takes place.

If the home’s entrance hall doesn’t seem in sync with the rest of the interiors, that’s because it’s a set. Taillon laments the wrought-iron balustrade used in the room — wood is more appropriate for 1882 — but the bigger faux pas is the interior’s lack of flashy flavor. Unlike the heavily-ornamented Newport mansions, the entrance hall looks tame. It seems even HBO’s top-tier production values can’t compete with the excessive wealth used in Gilded Age design.

As for the building’s facade — it’s also part of a set imagined by designer Bob Shaw and his team of artists. According to New York Magazine, Shaw drew inspiration from The Sloane House (1894) — an Upper East Side mansion designed by architects Carrère & Hastings, whose founders previously worked for Stanford White’s firm. The home’s carriage entrance brings to mind the Cooper Hewitt building, completed in 1902 for Andrew Carnegie. But the Russells’ Corinthian-style columns most closely resemble the Vanderbilt Triple Palace (1882), designed by John B. Snook and Charles B. Atwood. A moat encircled the bottom floor, letting light into the basement — an ingredient missing in the Russell home. Brownstone also covered the Triple Palace, not the white exterior favored by the Russells — a detail Wharton might approve. (In The Age of Innocence, Wharton modeled a character after her real-life aunt, Mary Mason Jones, who turned heads by building a white marble mansion along 5th Avenue.) 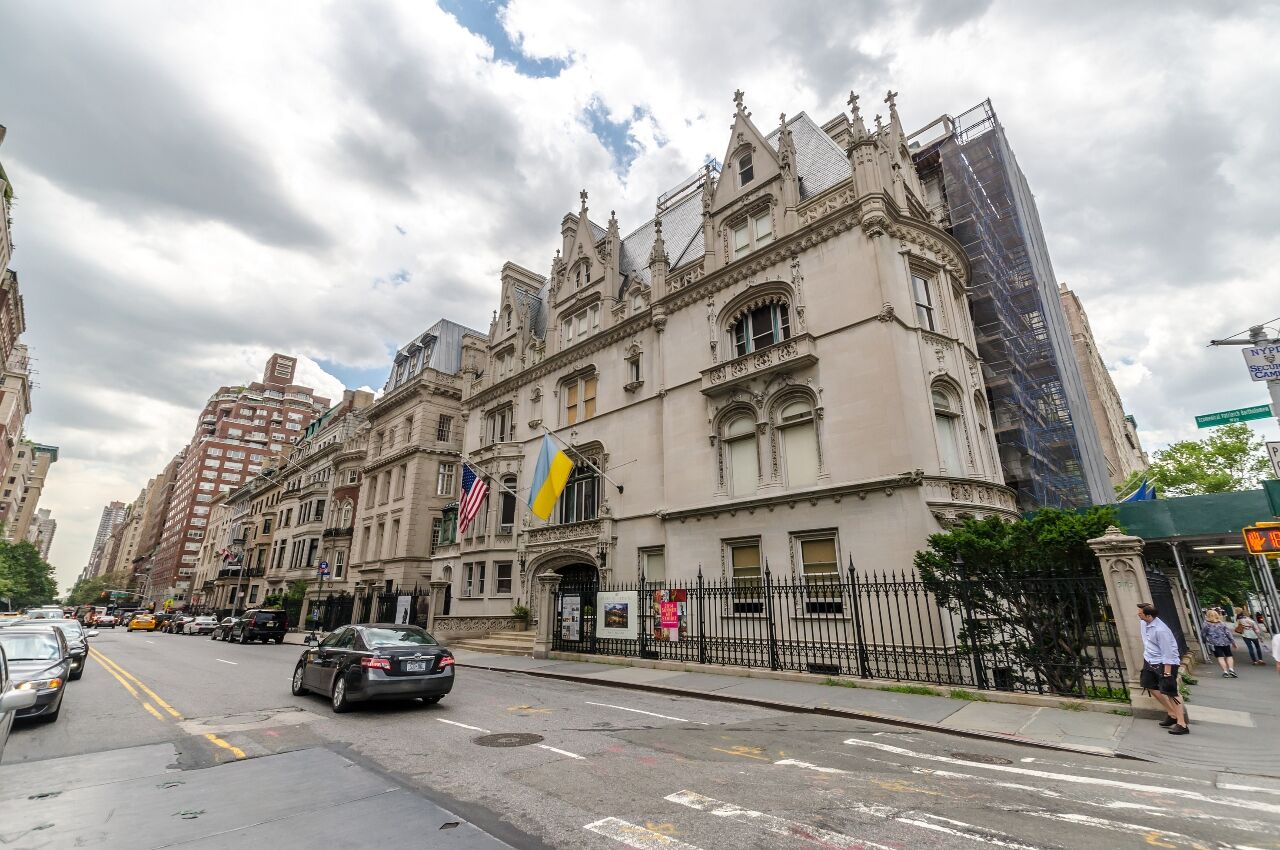 Many of The Gilded Age‘s grandest mansions got demolished by the mid-20th century, but if you skip above 70th Street on 5th Avenue, it’s possible to see a smattering of homes along what was once called ‘Millionaires Row.’

Start at steel magnate Henry Clay Frick’s Beaux-Arts mansion (1914) — now a classical art museum on 70th Street. With a limestone exterior shaped like the Triple Palace, the fortress is the closest you’ll get to walking through the doors of the Russells’ not-so-humble abode. Next up is the Ukrainian Institute of America (1899), located on 79th Street — a Gothic castle that rivals William and Alva Vanderbilt’s long-gone chateau. Finally, mosey to 91st Street, where Andrew Carnegie’s English Georgian mansion appears like a Bertha Russell daydream.

Bertha leaves the big city for Rhode Island in episode eight, “Tucked up in Newport,” and finds herself at Beechwood — home of non-fiction socialite Mrs. Astor. A camera shot swoops around the home’s slate-gray Victorian architecture just as Bertha pulls up in a carriage.

This home isn’t actually Beechwood — it’s Chateau-sur-Mer, a different Newport mansion constructed in 1852. Mrs. Astor’s real Beechwood, a cream-white confection overlooking the Atlantic, was built around the same time but in the Italianate style. 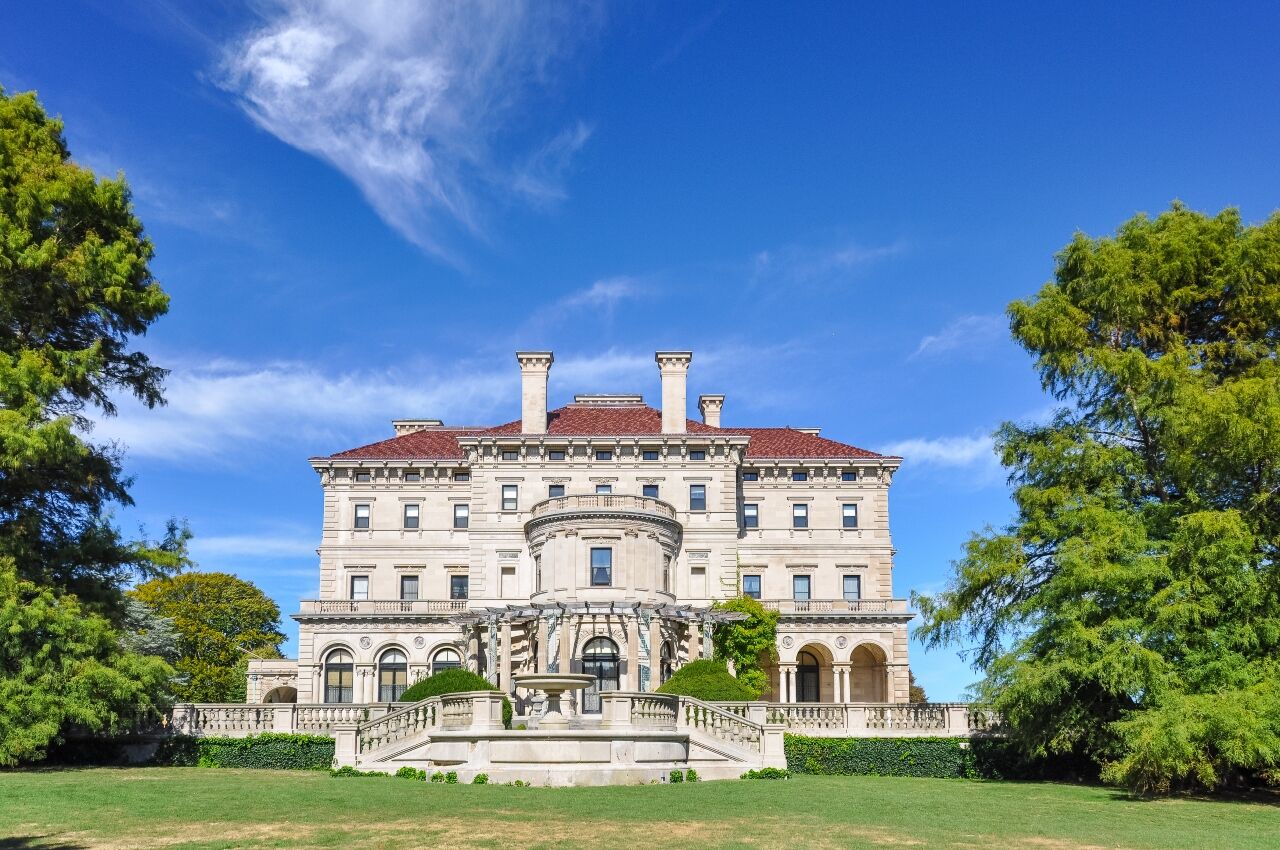 Newport, Rhode Island — Gilded Age getaway for New York’s wealthiest residents — remains a treasure trove of 19th-century design. Most of the ‘cottages,’ as their owners laughably called them, are sprinkled along historic Bellevue Avenue and Ochre Point.

Thanks to the Preservation Society of Newport County, it’s possible to tour places like Chateau-sur-Mer, The Breakers, The Elms, and Marble House while getting the low-down on their former owners. As for Beechwood, you’ll have a hard time gaining access. The property is owned by new-money magnate Larry Ellison, the world’s 9th richest person. Old-guard Mrs. Astor would be horrified.

While the French Impressionist’s sculpture fits the period, it’s not likely anyone would’ve owned it. Degas completed the piece circa 1881 and exhibited it that spring. Critics panned the work, and the artist never showed it again in his lifetime. According to the Metropolitan Museum of Art, a New York-based art collector named Louise Havemeyer attempted to purchase the sculpture from Degas in 1903, but Degas refused to sell.

After Degas died in 1917, his heirs replicated the statue in bronze. One of those statues stands in the Met, a grand Gilded Age museum constructed in 1870. You can find the original wax sculpture in Washington DC’s National Gallery of Art.