My first thought upon entering the Margaritaville Resort Times Square is just how sparkling clean and quiet it is. Just outside the door, on the corner of 7th avenue and West 40th street, Midtown Manhattan is hustling and bustling away as it always is — tourists carting shopping bags crowd the sidewalks, street hawkers sell their wares, cars honk and speed through intersections.

But an oasis awaits just through the doors of Margaritaville — at least it did in February, when my partner and I packed our five-month-old baby into the car and made the trek from New Jersey to Manhattan to find out why the Margaritaville is, as the hotel’s website puts front and center, the highest rated New York City hotel on TripAdvisor.

Margaritaville Resort Times Square is at the epicenter of activity for out-of-towners who are in New York City for a certain type of experience. It’s just walk or short cab ride from Madame Tussauds, the Hard Rock Cafe, Theater District, and that giant H&M on the corner of 42nd street. Maybe the guest is in town to see Harry Potter and the Cursed Child or Phantom of the Opera on Broadway, or to do a little shopping without straying too far from the hotel. Especially for first timers, the iconic billboards, flashing lights, bus tours, and the M&M’s store in Times Square are an undeniable draw, and Margaritaville is right in the middle of the action. Basically, if you want to visit a part of New York City that’s one of the most visited tourist locations in the world without ever stepping on a subway (which is certainly valid), this hotel is probably appealing. 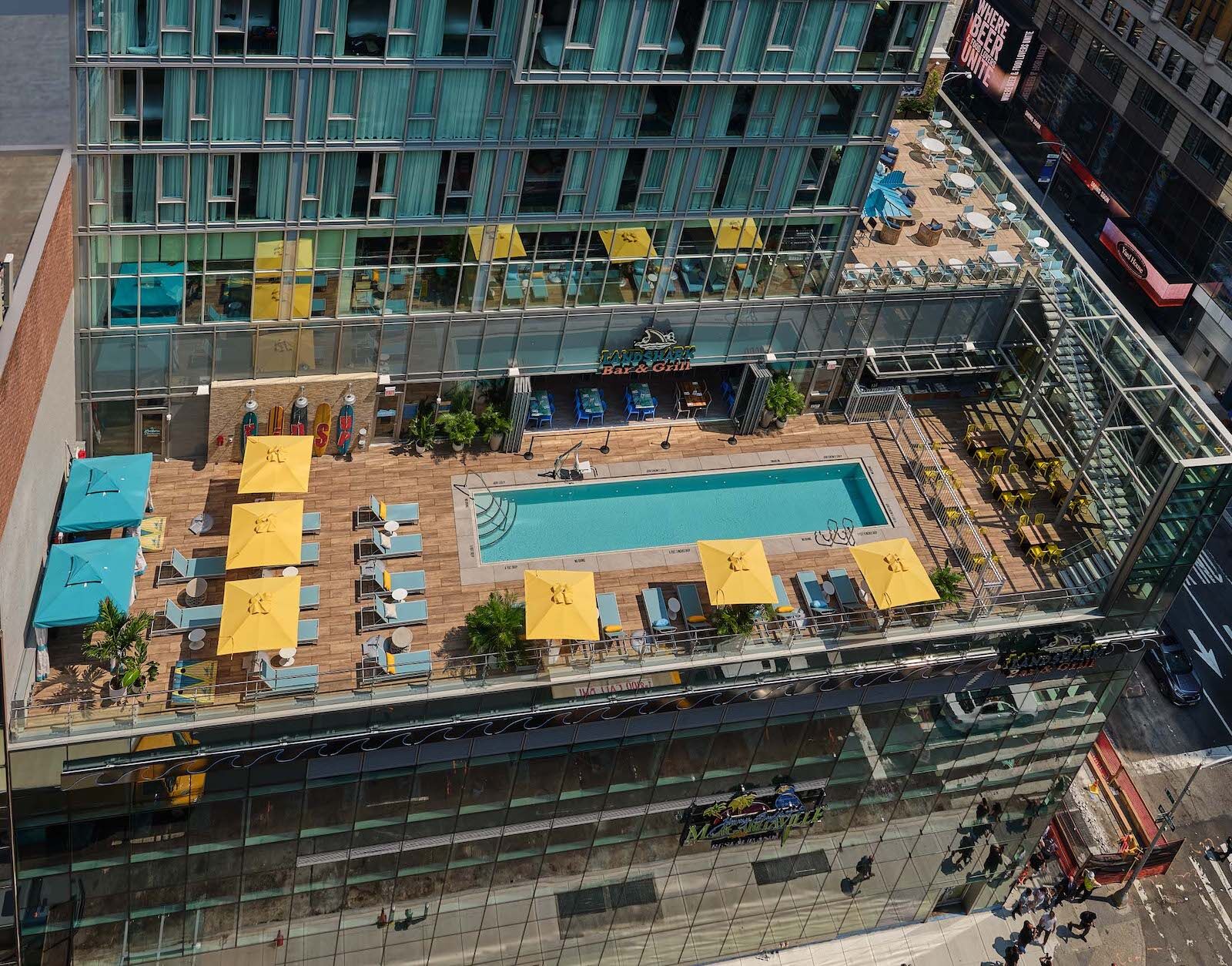 But there’s actually much to recommend the Margaritaville Resort Times Square for people who live in New York City, or at least nearby. Hear me out!

I’m not from New York, but I lived there for about eight years before I moved to New Jersey, so I know how overwhelming, noisy, and chaotic it can be. All these characteristics are part of the city’s charm, but there’s no shame in needing a break, and Margaritaville is — perhaps counterintuitively for some New Yorkers and New Jerseyans raising their eyebrows skeptically at me right now — kind of perfect for that.

Yes, it’s kitschy. There is a giant blue glass flip flop standing sentry in the lobby. But that’s part of what makes it so delightful. Margaritaville knows exactly what it is, and leans into that identity hard. It’s a retreat where it’s okay to let loose and forget all about your responsibilities. Which is exactly what we proceeded to do as soon as we got settled (within reason because, well, we brought our baby).

There are three bars in the hotel, each with a different vibe. We started at the Landshark Bar and Grill (which is breastfeeding friendly, by the way; before I started drinking I fed my daughter without incident or weird stares). This restaurant offers totally decent seafood (I recommend the ceviche and coconut shrimp), but more importantly it has a drinks list that’s longer than the food menu.

The drinks are simply delightful – certainly on the sweeter side, but like a trip to the beach in a cup. Desperate to escape the dreary slate gray skies hovering over New York City, I ordered pretty much anything with blue curacao as a main ingredient, which made me feel not only like I had been transported to warmer climes, but that I was truly on vacation. No way would I ever drink a bright blue cocktail garnished with a slice of pineapple followed by a shot of something pink that tasted slightly of watermelon in my regular life, but this is Margaritaville, baby! There are no rules!

There’s really no reason to leave Margaritaville because there’s plenty to do inside the resort. The outdoor pool is heated and open throughout the year, though I can’t attest to its ambience or temperature, as we thought it was too cold to venture a dip with a baby in tow. And if you’re looking for a more sophisticated take on Margaritaville, there’s a bar for that, too.

After relaxing in our room for a while (my only complaint about the room: the shower pressure was so weak it kept turning on and off), we decided to check out the hotel’s rooftop bar, It’s Five O’Clock Somewhere, where we traded tropical cocktails for Champagne. The bar offers heat lamps and outdoor seating, and the wooden tables and dark blue interiors inside convey a more mature, low-key atmosphere. As a big plus for parents, they didn’t object to us parking our large stroller tableside. 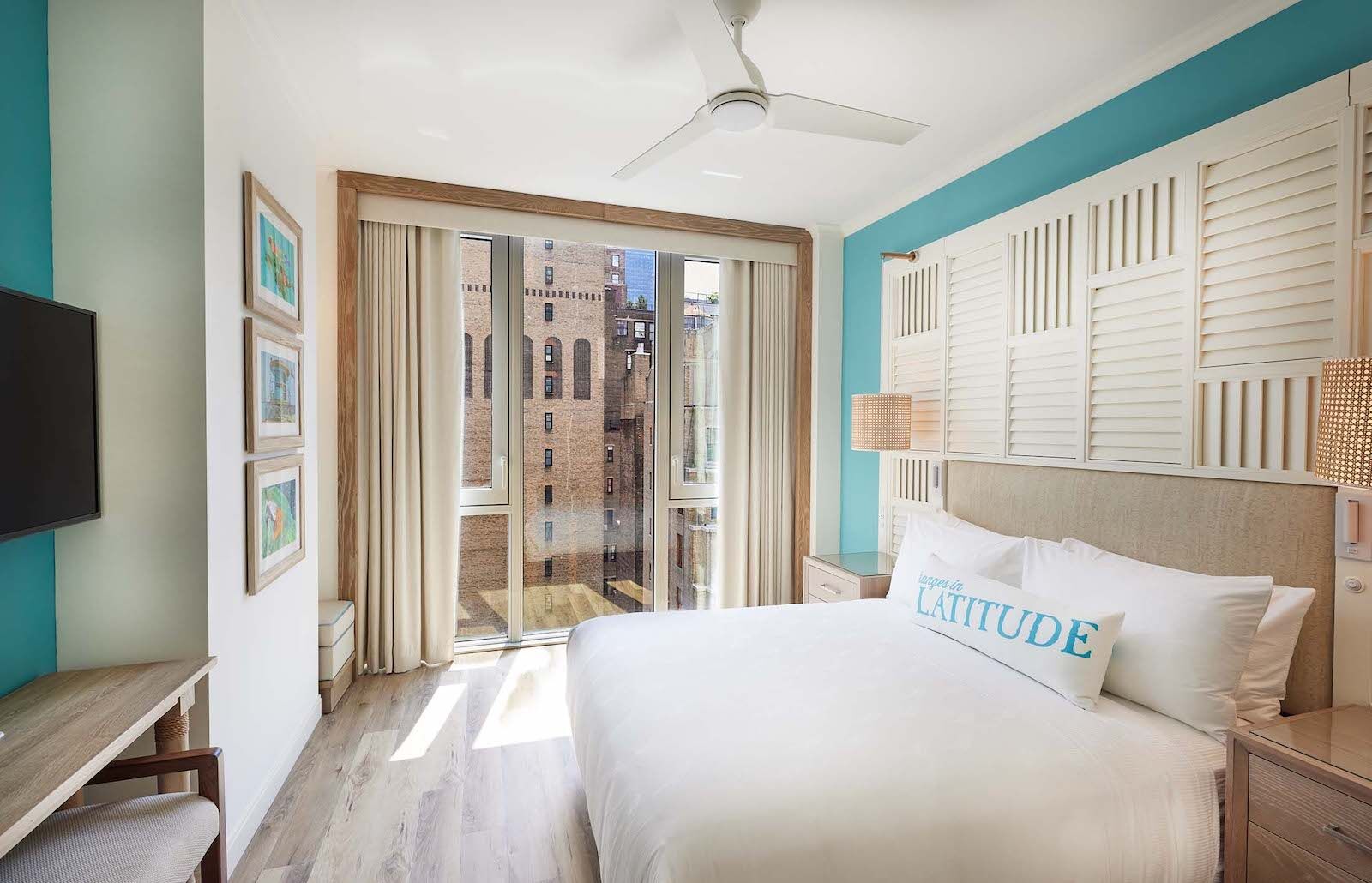 If you don’t have a dinner reservation, there’s no need to panic. The third restaurant and bar is the tiki-themed Margaritaville Restaurant, the resort’s go-to spot for dinner. Full disclosure: We had planned to eat dinner at the Margaritaville Restaurant, but a moody baby required that we order room service instead. Which brings me to what I loved the most about my stay at Margaritaville: You can bring any drink that you purchase at the bar back to your room.

As a first-time parent who leaves the house infrequently, this seemingly small amenity of the hotel was actually a blessing. After we successfully rocked the baby to sleep and laid her down in her bassinet, my partner and I ordered room service and quietly rolled two chairs into the bathroom, where we ate in silence (the bathroom was sparkling clean, I promise, and it’s not like we were eating off the floor). After we were done, I grabbed a key card, tip-toed out the door, and headed straight to the bar where I ordered my partner and I our first round of drinks, and brought them back to our room. For the rest of the night, we switched back and forth grabbing beverages from the Landshark bar while our baby snoozed peacefully next to the bed. Unable to watch television, we laid in the bed and giggled, showing each other memes on our phones and laughing at inside jokes. It was ridiculously fun, oddly romantic, and very much needed.

Maybe I dismissed the Times Square Margaritaville as a tourist trap for out-of-towners at first, and maybe you still do. But if you need a getaway from the city while in the city, it’s worth giving Margaritaville a try.