Everest Base Camp is a place nearly everyone in the outdoors community knows but most will never see. A rudimentary base on Mount Everest used by mountain climbers aspiring to scale the summit of Mount Everest, the base is also popular amongst hikers who want to catch a glimpse of the Himalayan wonder but aren’t quite ready to face the costs or the grueling climb to the summit. Before you embark on this journey, there are a few things you need to know.

There are both North and South base camps 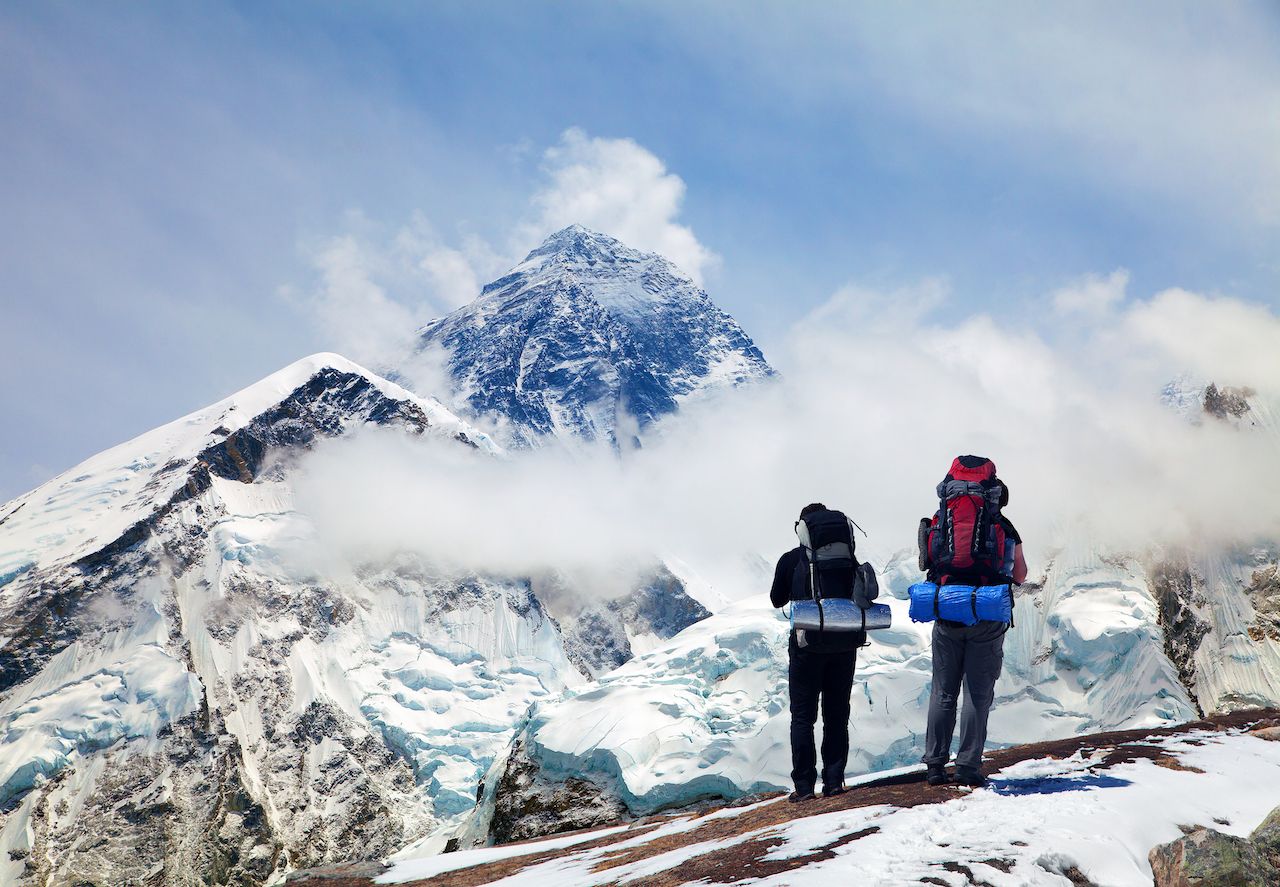 It is a lesser-known fact that there are actually two base camps, north and south, each on opposites side of Everest. The South Base camp, situated in Nepal, sits at 5,354 meters — 17,600 feet — and can be accessed via a flight or trek from Kathmandu to the Lukla airport and then another trek to the camp. The South Base Camp is situated in Tibet, on the Chinese side, and stands at 5,150 meters, or 17,056 feet. It can be accessed via a 100 km road from the Friendship Highway near Shelkar. Both are the subject of much speculation and seemingly unbreakable rumors, some true and some false. Let’s have a closer look.

1. Everest Base Camp is overcrowded

False. In the high season, there will be a multitude of tents pitched at Everest Base Camp but there are also guesthouses a mere 3.5 km walk away. Whilst there may be an issue with overcrowding higher up on the mountain on the way the summit, at base camp, this issue isn’t prevalent.

2. There is human waste and litter on the trail

True and false, depending on the location on the mountain. While there have been reports of escalating levels of rubbish on the camps higher up on the mountain, the trail is, to a large extent, litter-free. Furthermore, the Nepalese government introduced an environmental deposit of $4000 per expedition to incentivize groups to bring their rubbish down. It is required by mandate that each climber of Everest bring 17 pounds of trash with them down on their descent. Failure to comply means forfeiture of the deposit.

An environmental permit has also been introduced where teams could obtain a permit above generally restricted numbers if they contributed to cleaning up the mountain. As a result, it was reported by Forbes in May 2019 that instead of stepping over trash and human waste, there was merely snow on the trail, signs that the government’s efforts are working.

3. Everest base camp is closed to tourists

False. The base camp on the Tibetan side is closed to those who don’t have permits. Climbers with a permit are still permitted to access the camp but only 300 of these will be issued every year. It is important to note that the Nepalese Base Camp is still open and accessible as usual. But the restriction from the Tibet side will no doubt result in a spike in hikers attempting the route from the south side.

4. It is party central

True. If you have the funds, alcohol is easily accessible throughout the trail, as well as at the guesthouses close to Everest Base Camp. Partying is a big enough part of the culture there that DJ Paul Oakenfold performed at base camp back in 2017. Many of the guesthouses don’t have televisions, and guests have to pay a premium to use wifi and charge electrical gadgets. A beer, costing $5, is an easy and cheap option to relax and pass time in the evenings. Guesthouses earn well from thirsty, bored hikers and as such, don’t tend to discourage excessive drinking.

What you actually need to know before making the journey 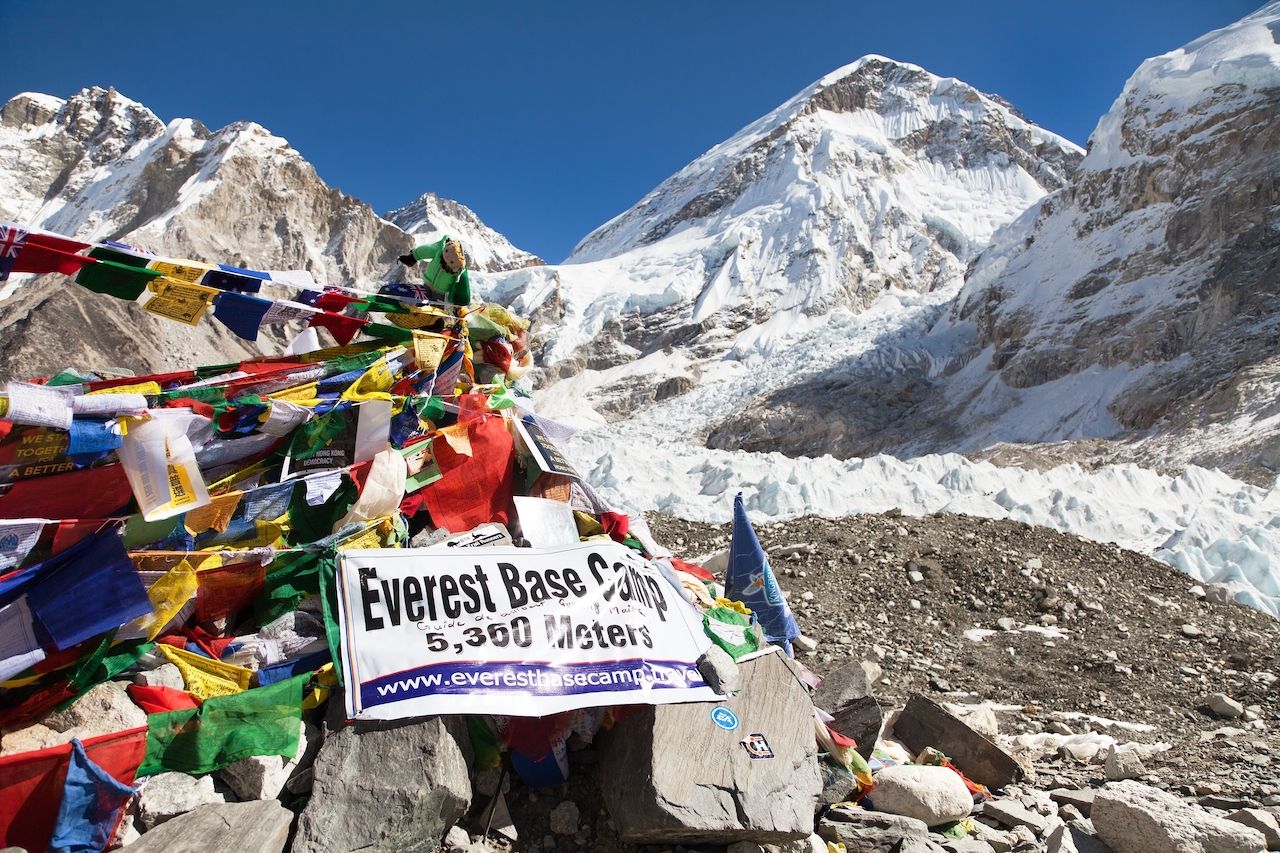 1. There is a fake base camp and a real base camp

The final guesthouse before you reach Everest base camp is called Gorak Shep. Often hikers will drop off all their belongings here and trek the remaining 3.5 km to arrive at base camp. You will see big rocks and a multitude of bright flags with a sign reading ‘EBC’, along with a plethora of hikers celebrating and taking selfies.

Ignore them, turn right, and continue walking on for another seven minutes and you will then notice a small mound of snow surrounded by glaciers and a few flags. This is the real base camp, and the place where you should actually snap a selfie and breath a sigh of relief. Don’t be duped by fellow travelers that don’t do proper research.

2. Expect wind from all directions

A common issue that hikers face along the trail is an excess of what we’ll call “bodily wind.” This could be due to the carbohydrate-rich food served along the trail. Daal bhaat is a common dish on offer for lunch and dinner, which consists of lentils and white rice, served with vegetable curry. The flatulence could also be caused by water, which is often cloudy as you trek higher up the trail. It is prudent to carry water purification tablets, a portable water filter or a Steripen, which uses ultraviolet light to purify water in 30 seconds.

The Sherpa community perceive the mountain to be sacred. As a result, animals are not killed on the mountain. This means that any meat consumed needs to be carried up the mountain via a Sherpa. It takes days for the Sherpas to trek up the mountain, so there is no guarantee that the meat is fresh or safe for consumption. Your best bet is to stick with the Dhaal bhaat and whatever else is on offer. The last thing you want to deal with is a bout of food poisoning or even a slightly upset stomach.

4. The Lukla Airport is among the most dangerous in the world

One way to access the bottom of the Nepalese Base Camp is to fly from Kathmandu to Lukla Airport. Lukla Airport is consistently ranked as one of the world’s most dangerous. Its runway is a mere 1,600 meters long, which ends in a 2000-foot dramatic drop. The mountainous region also means that visibility is poor and the weather changes swiftly, which has resulted in a crash rate that is far higher than at most airports. If you’re going to brave it, don’t be uptight about scheduling. It is not uncommon to have flights postponed for up to a week due to weather.

A pricier alternative is to take a helicopter, which is still risky. However, if you booked your ticket with a local travel agent in Kathmandu, it’s worth asking them to help negotiate with the helicopter operators to see if they can swap your plane ticket for a helicopter one. There is a strong connection and level of respect between some transport operators in Nepal and it’s entirely possible to make this swap if you speak to the right people and bargain. The view of the misty Himalayas in a helicopter will be worth the extra effort.

5. The glaciers are beautiful but deadly

As you ascend closer to Everest Base Camp, there will be glaciers that surround the trail. They are beautiful to observe but if you get too close, it can prove to be fatal. Often, the melting ice is unstable and large chunks can fall off and crush you. There is also the risk of slipping and falling into a crevasse, which is the stuff nightmares are made of.

BackpackingHow To Prepare for a High-Altitude Trek
Tagged
Backpacking Insider Guides Nepal
What did you think of this story?
Meh
Good
Awesome