Dellene suddenly cried, “Oh My God!” and tried to climb my back. I looked to my left and saw an enormous gorilla bursting out of the thick foliage and charging toward us like an onrushing railroad boxcar.

***
There are four species of gorillas in Africa distinguished by habitat and slight differences in physiology. The mountain gorillas are the rarest of them all. According to the Karisoke Research Center in Rwanda, there are fewer than 880 of them left in the wild. Considered critically endangered, they live in the mountains of Rwanda, the Republic of Congo, and Uganda. The gorillas are protected by the Rwandan government, and visits to see them are carefully controlled. Martin, our safari leader, had organized our trip and made reservations more than a year ahead of time for our group to see these beautiful creatures.
***
The gorilla family we were to visit had been accustomed to the presence of humans by the primatologist and researcher Dian Fossey, who was murdered in 1985, three years prior to our visit. Fossey lived alone in the mountains near her gorillas and patrolled the Park trying to prevent poachers from capturing young gorillas and killing adult gorillas as they tried to protect their young. Although Fossey’s murder is officially unsolved, she was likely killed by poachers.

As good fortune would have it, the day before we were to see the gorillas, I happened to meet Rosamond Carr (Dian Fossey’s best friend in Africa and now deceased) in our hotel’s gift shop in Gisenyi. She graciously answered some of my questions about the gorillas that Fossey worked with. She explained that most of them were in good shape, but that a few had recently been taken by poachers. Poachers sometimes kill gorillas for bush meat or simply for trophies such as heads and hands that might be made into ashtrays and other gruesome trinkets.

***
When you set out to observe gorillas in their natural habitat, you must prepare carefully. At the Virunga National Park Headquarters, near the base of the volcanoes, we were given instructions on the proper behavior to exhibit in the presence of gorillas:

After our gorilla education, our group split into two groups and we began our journey into the mountains. Each of our groups was with two Rwandan men, one serving as a tracker skilled at locating the gorillas, and the other armed with a rifle to protect the group against Cape buffalo and other dangerous creatures that might be encountered on the trek.

Leaving the visitor center, we hiked past farmland as we climbed the volcanic slope toward the boundary of Virunga National Park. A low rock wall marked the beginning of the park. As we stepped over it, we left behind cultivated fields and entered the jungle. We paused to tuck our pants legs into our socks and don gloves. Our guide warned us that we would be hiking through thick patches of nettles, tangles of vines, and head-high grass. We would likely encounter colonies of stinging ants as well.

Not far up the slope, we entered a forest of giant bamboo that shaded us from the fierce equatorial sun. The bamboo plants had stalks as big as our legs. The shade discouraged the growth of other vegetation, creating a forest floor that was relatively open and easy for hiking.

Our guides led visitors nearly every day, so they knew the general area in which the gorilla family we were seeking was likely to be found. However, it was first necessary to pick up the trail left by the gorillas as they foraged. That day, the gorillas made things difficult for us. We tracked them up and down the volcanic slope through a virtually impenetrable wilderness of bushes, trees, and vines. At times, we could see no more than a few feet ahead and lost sight of other members of our group. Underfoot was a deep layer of vines substantial enough for us to walk on, but occasionally, our feet would fall through the vines up to our knees. Trooping through the lush vegetation, brushing ants off our clothing, and extricating our legs from the vines was a struggle that exhausted us, especially in the thin air of ten or eleven thousand feet.

We had been informed at the park headquarters that locating the gorillas was not always easy, and if they were not located within a three-hour trek, we would return to the base camp. We made our way up and down the slope for two hours before we emerged into a relatively flat saddle between two volcano cones. Hiking was much easier there since the ground-level vegetation was sparse.

Our trek had taken us near the junction where Rwanda, the Democratic Republic of the Congo, and Uganda meet. Since the rainforest contains no boundary markers, the guides informed us that we may have crossed from Rwanda into DRC, or possibly Uganda.

The harsh journey sapped our energy. Yet, we could not stop to rest for more than a few seconds — our three-hour limit was nearly up. I became discouraged and began to rationalize having to return to base camp not having succeeded in finding the gorillas.

The gorillas’ tracks led into another stretch of thick vegetation. Suddenly our guides motioned for us to halt, crouch low, and remain silent. We could see nothing, but one of our guides pantomimed the word “gorillas”. The guides made grunting sounds to let the gorillas know of our presence. We approached the gorilla family slowly, having yet to see them through the vegetation. I happened to be the closest to our guides, and one of them pointed up the slope. I came up beside him and saw a dark shape ahead, barely visible through the foliage. It was a young female. As our group carefully made its way toward her, we could hear the sound of gorillas feeding on plants all around us — we were in the middle of the gorilla family. 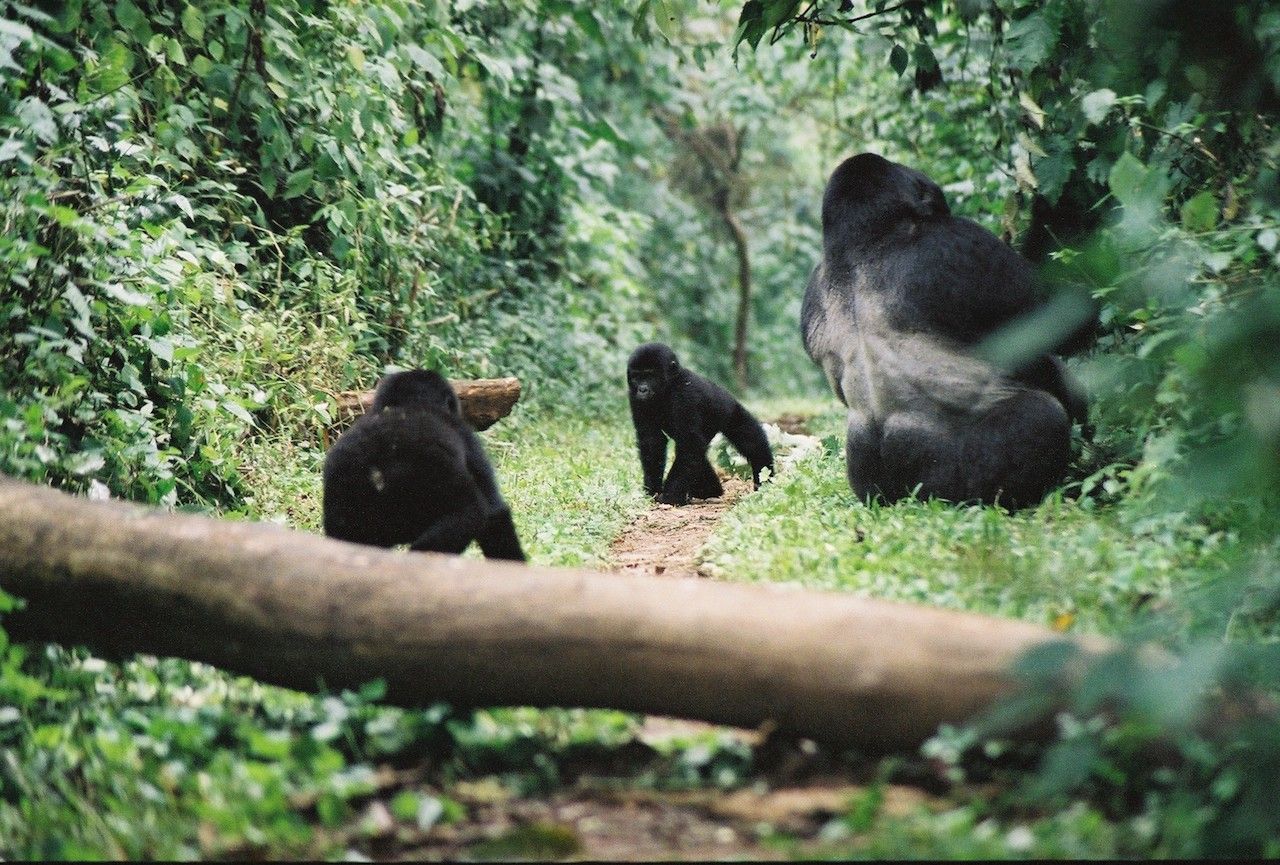 Just ahead of me, I saw a baby gorilla climb a stalk of bamboo. He looked me over for a second or two before a big hand reached up and pulled him back down out of sight. 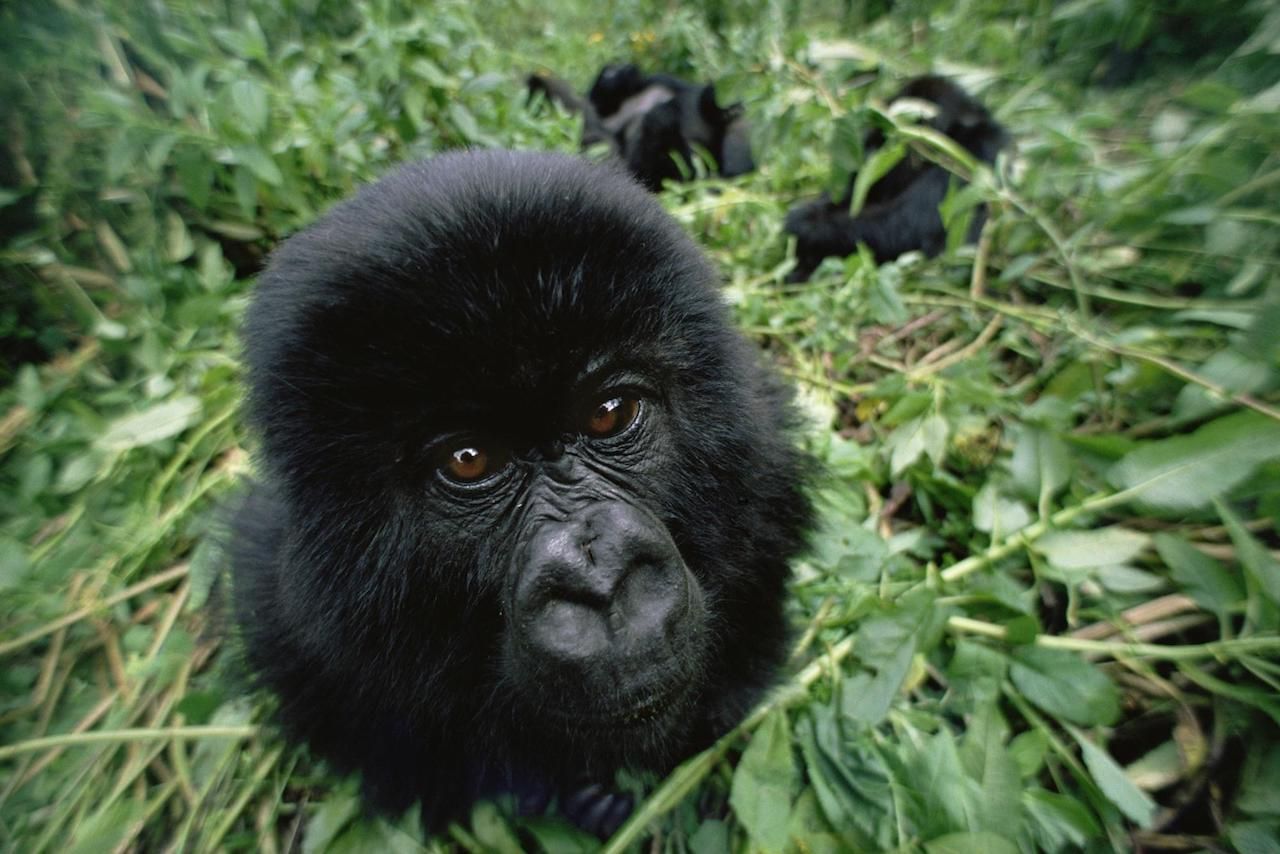 Our group settled in a small clearing in sight of several gorillas who were chewing on vegetation about ten or fifteen feet away. Their coal-black fur glistened in shafts of sunlight. They seemed to pay us little attention as they ate and moved around. I remembered not to stare at them, and crouched low, with Dellene behind me.

At that moment, only a couple of minutes after we first found the gorillas, Dellene cried out and pushed against me. The large silverback male who led the gorilla family burst from the jungle and charged through our group. Dellene and I made ourselves small as the animal swept by and disappeared into the foliage on the other side of the clearing. My heart was pounding. I noticed that our guide up ahead was laughing. He explained that the gorilla was Ndume, the silverback male that ruled the family. He was “showing us the flag” to let us know he was the boss. We were not inclined to dispute it.

After some minutes, Ndume moved his family to another foraging location about 50 yards away. We followed. Ndume eventually returned to our group and settled into the grass by one of our guides. The silverback had caught his right hand in a poacher’s snare. His severe injury had forced the park veterinarian to amputate his hand. Ndume leaned close to the guide and stared into his face. A sign of recognition and trust. 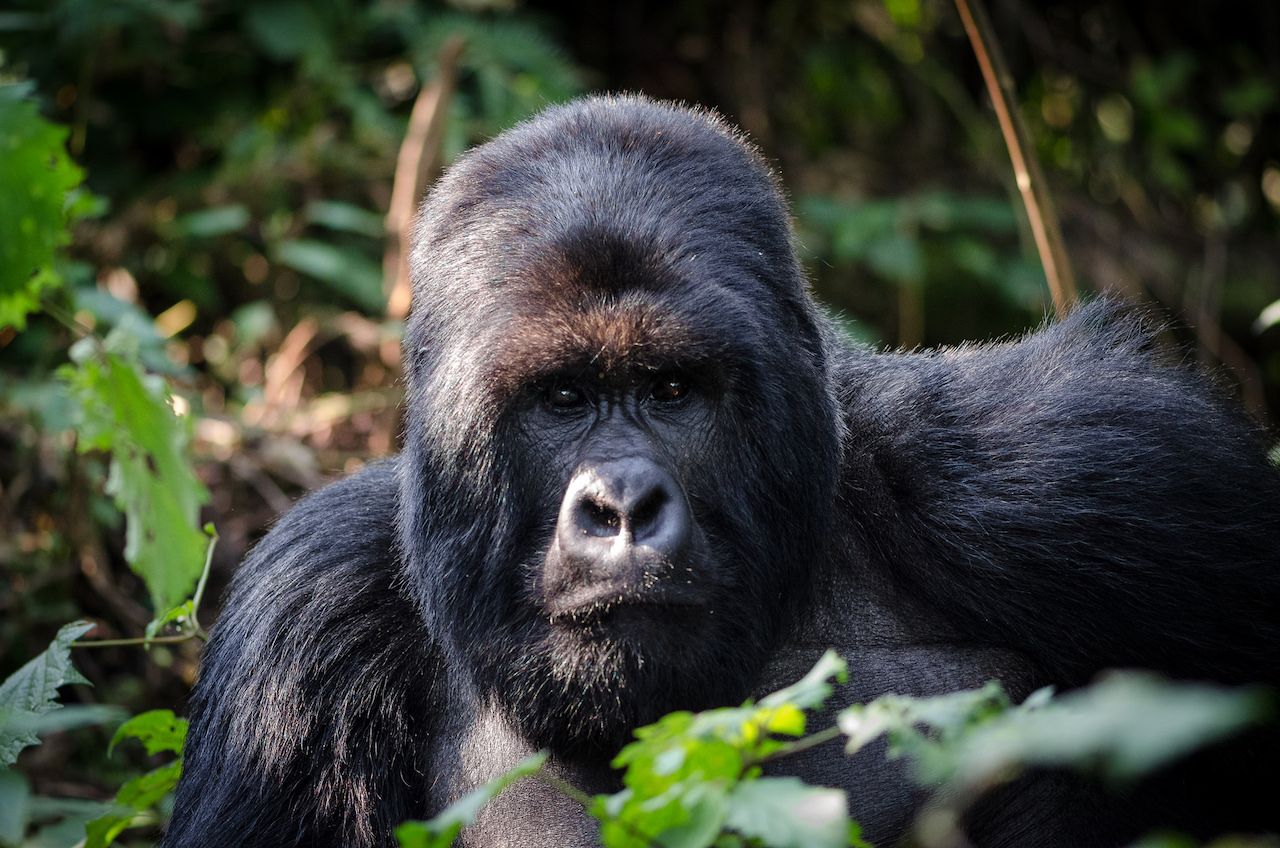 There was a sense of tranquility as we watched the gorilla family around us. There were likely ten or twelve of them. They kept feeding on vegetation, and occasionally glanced in our direction. To be that close to these majestic animals was mesmerizing. 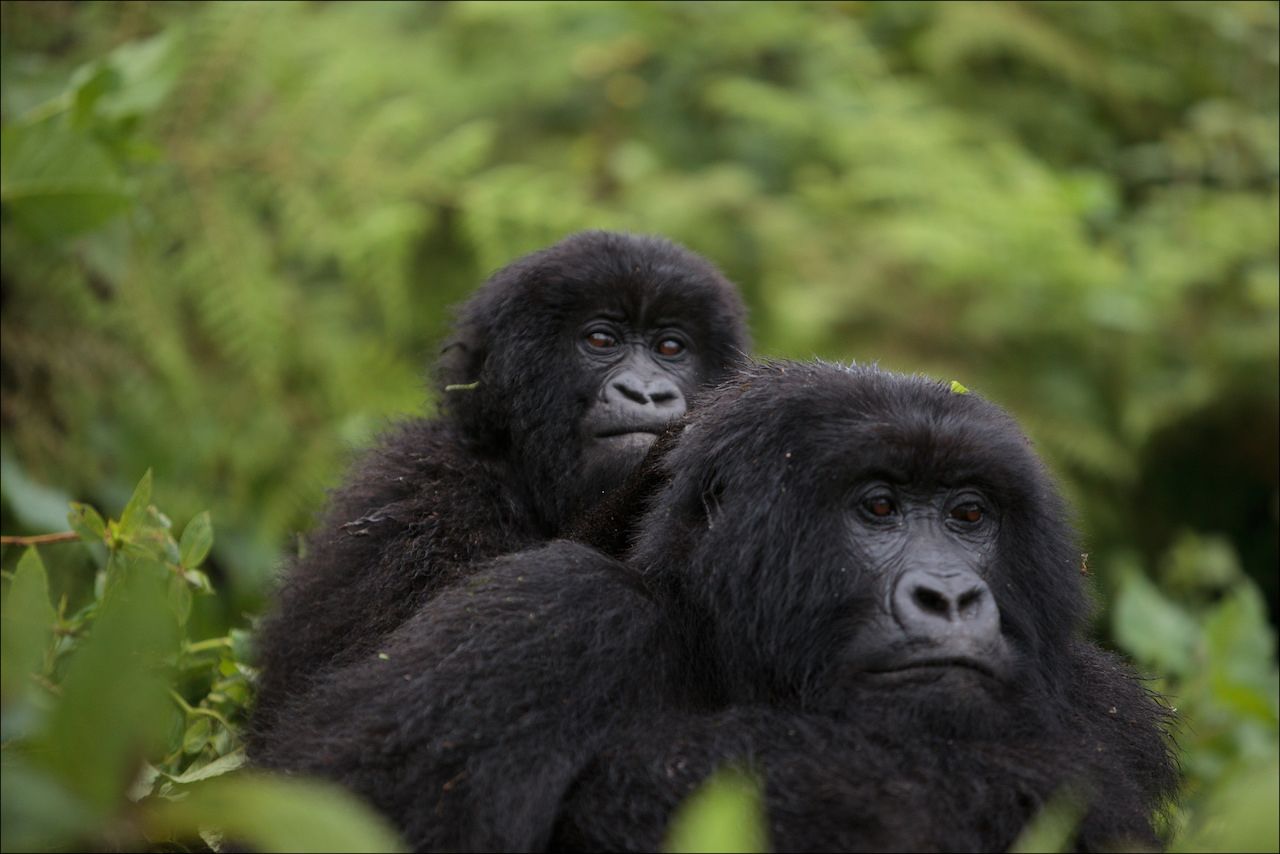 As I was crouched down photographing a pair of gorillas rambling along the trail ahead of me, I felt a hand on my shoulder. The guide behind me silently indicated that I should move to the side of the trail. I looked around and saw a large male gorilla behind me. He was stationary in the middle of the trail, staring at me, his deep-set eyes scarcely visible in the shade of his brows. I made myself small and leaned into the bushes beside the trail to give him room to pass. He ambled up beside me — and stopped. For at least a full minute, he stayed beside me, perfectly still, his body approximately six inches from me. For an instant, I was tempted to touch him, but quickly thought better of it as I recalled our instructions to avoid contact. I tried for a photo, but his bulk was too close to fit into my camera’s viewfinder.

It was clear to me that he was claiming the trail and reminding me who was in charge. I remembered that one of the staff at the park headquarters had told us that young male gorillas vied with each other to show their dominance and fitness in order to eventually displace the silverback as leader. He had explained, “So they are the ones most likely to cause trouble.” As we had let that thought sink in, he had added, “But that is unlikely to happen” and laughed. As I crouched beside the gorilla, I hoped he had spoken true. After a time, the animal sauntered on up the trail and followed the rest of the family. 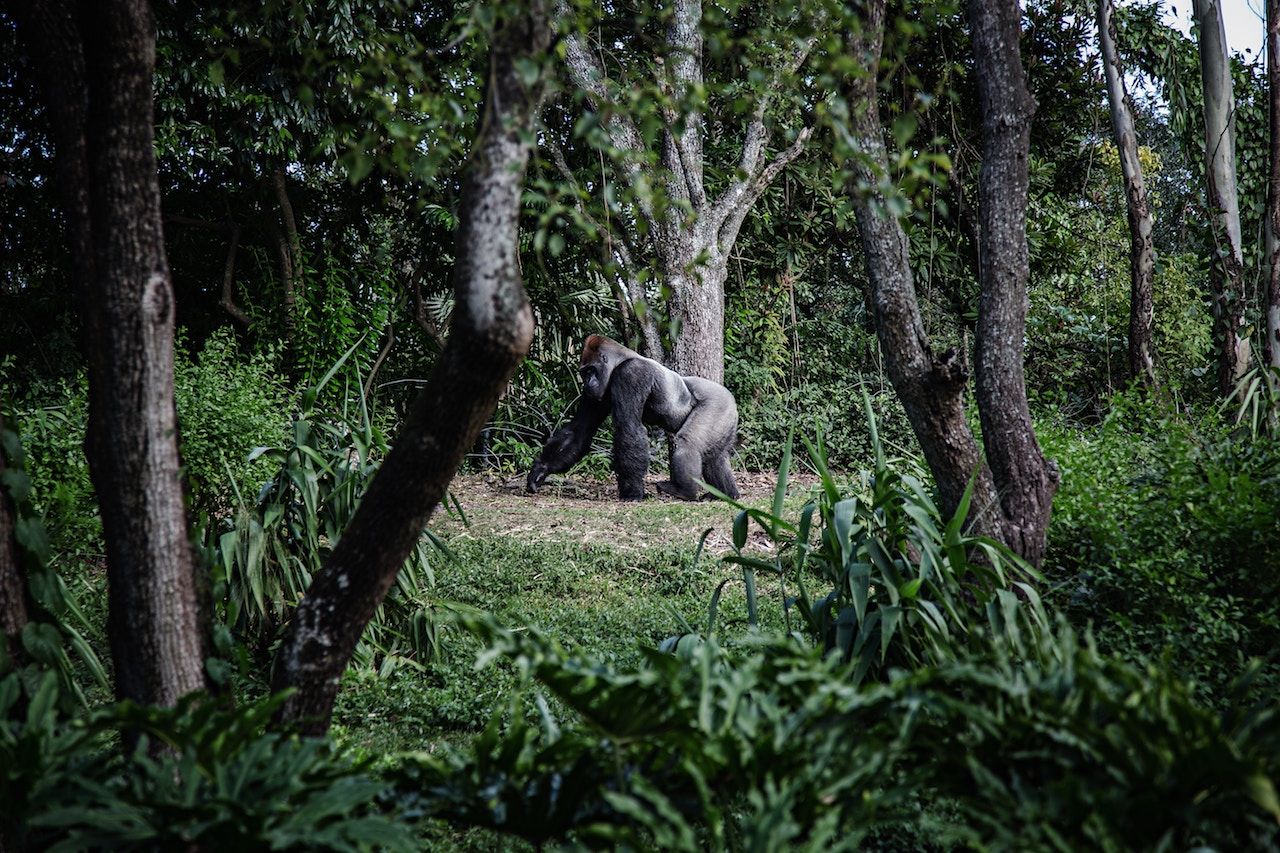 To avoid interfering with the family’s foraging and other activities, as well as to avoid getting them too used to having humans around, we stayed with them for only an hour. When our time was up, the guides led us down the long slope back toward the park headquarters.

The trek down was long, and we were tired but I can’t recall ever being as exhilarated.

National ParksHow To See Mountain Gorillas in the Wild in Uganda
Tagged
Narrative Wildlife Rwanda
What did you think of this story?
Meh
Good
Awesome