Many visitors to Tofino, British Columbia, have fallen under the spell of the Big Tree Trail on Wanachis-Hilth-huu-is, as Meares Island is known in the Tla-o-qui-aht language. Giant cedars draped in moss create a lush canopy over a narrow, warped boardwalk crowded by emerald ferns, and mushrooms the size of dinner plates blossom on tree trunks. But fewer might know that this enchanting forest was once in danger of disappearing entirely. 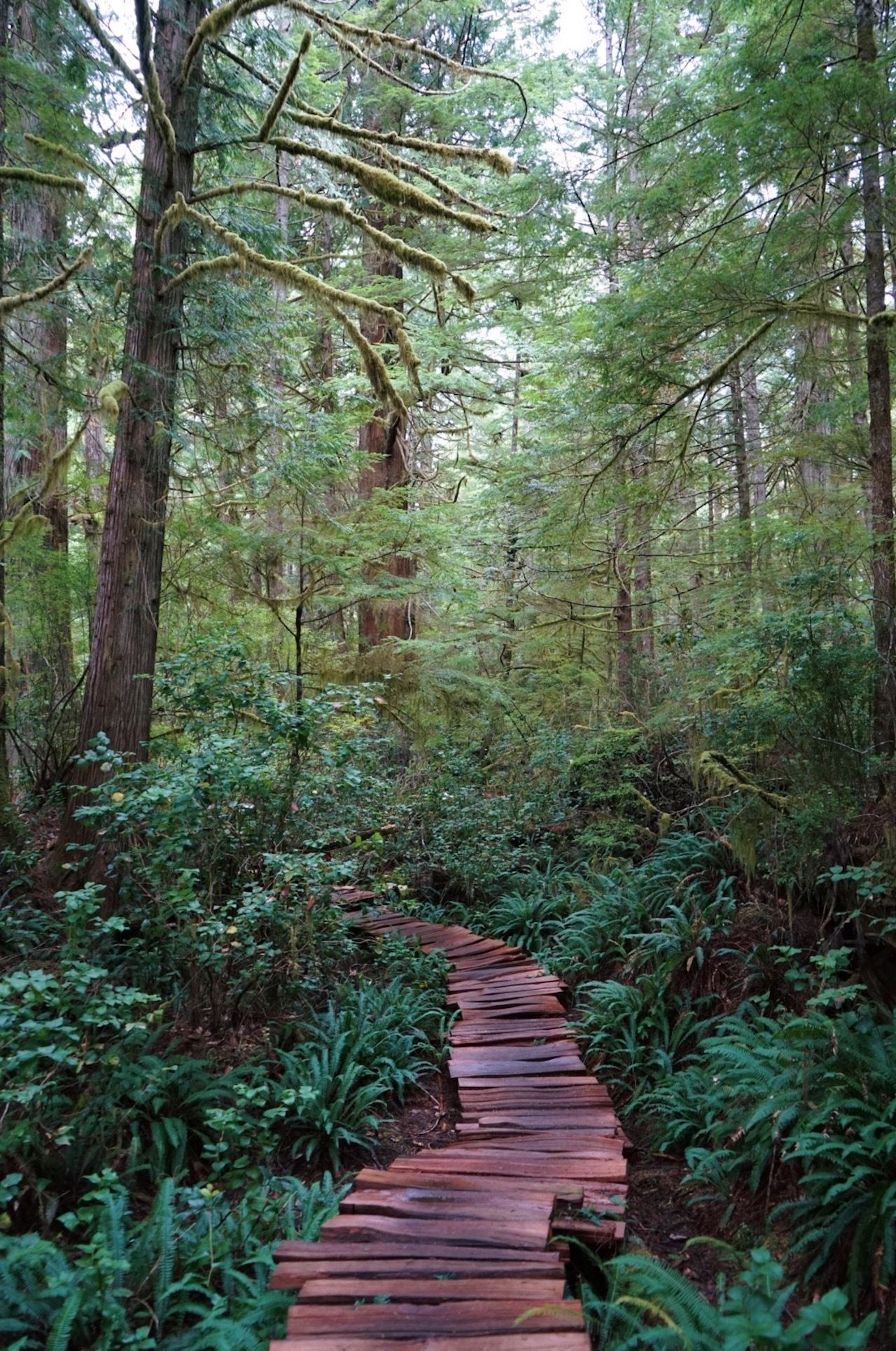 The island — a 32.7-square-mile expanse of temperate rainforest in the tidal waters of Clayoquot Sound — was declared a Tribal Park in 1984 by the Tla-o-qui-aht First Nation (one of 14 Nuu-chah-nulth First Nations on Western Vancouver Island), part of a growing movement to protect Indigenous land in the area from catastrophic logging. This environmental activism culminated in the Clayoquot protests of the early ‘90s — also known as the War in the Woods — where the Tla-o-qui-aht were joined by non-Indigenous allies in the fight. Nine hundred people were arrested, considered the largest act of civil disobedience in Canadian history at the time.

Moses Martin, a Tla-o-qui-aht elder who played a pivotal role in the protests and now leads natural history tours with the Indigenous-owned Clayoquot Wild, brings visitors from Tofino to the island. As the boat’s hull slices through the ocean, sending a salty spray up over its sides, Martin points out Stubbs Island. “The whole island was traded for two blankets and a barrel of molasses,” says Martin. This type of trade was not unusual when British Columbia was founded in 1871. Nuu-chah-nulth territories were illegally designated by Canada as Crown land and were deeded or sold off to settlers for next to nothing. 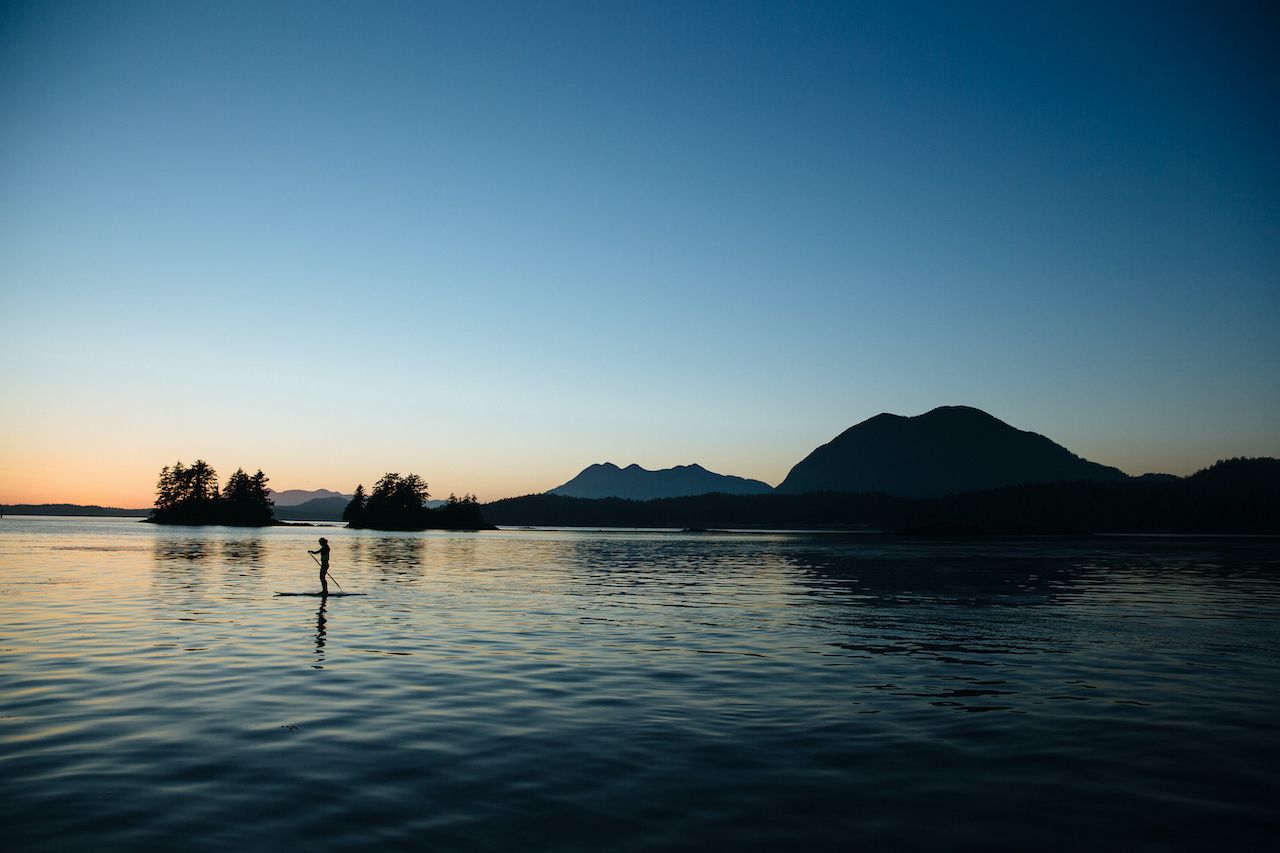 Not only is Meares Island part of the Tla-o-qui-aht’s sacred ancestral gardens that make up Clayoquot Sound, but it’s also a fragile ecosystem surrounded by estuaries, mudflats that are habitats for migratory birds, and the source of Tofino’s clean drinking water. And the only reason it’s still here is because of Indigenous stewards of the land, like Martin, who fought tirelessly to protect it.

“There are two main principles that apply to us as First Nations people, one being Iisaak,” says Martin. The word translates to “respect” or “to observe, appreciate, and act accordingly,” an ethos that at its core was in conflict with unsustainable logging. “We’re part of this circle of life, and if you impact anything within that circle you have to do it with respect,” explains Martin.

Even though the protests were successful in achieving a court injunction and warding off total destruction of the ecosystem, to this day no treaty has been signed with the Tla-o-qui-aht. British Columbia only recently made a commitment to change by signing a bill that enacts the United Nations Declaration on the Rights of Indigenous Peoples into law. But the community of Tofino is taking a more active role in championing First Nations’ right to self-government and long-term protection of the town’s Tribal Parks through Tribal Park Allies.

The organization was founded in 2018 by the Tla-o-qui-aht First Nation and includes a network of Indigenous and non-Indigenous businesses that publicize Tla-o-qui-aht rights and titles to the territory, educate employees on the town’s Indigenous history, and participate in community-building events. A one-percent ecosystem service fee is also collected, which enables Indigenous Tribal Park guardians to continue their land conservation work. This includes maintaining places like Meares Island and other parts of Clayoquot Sound, which are often environmentally degraded by squatters and illegal campers. 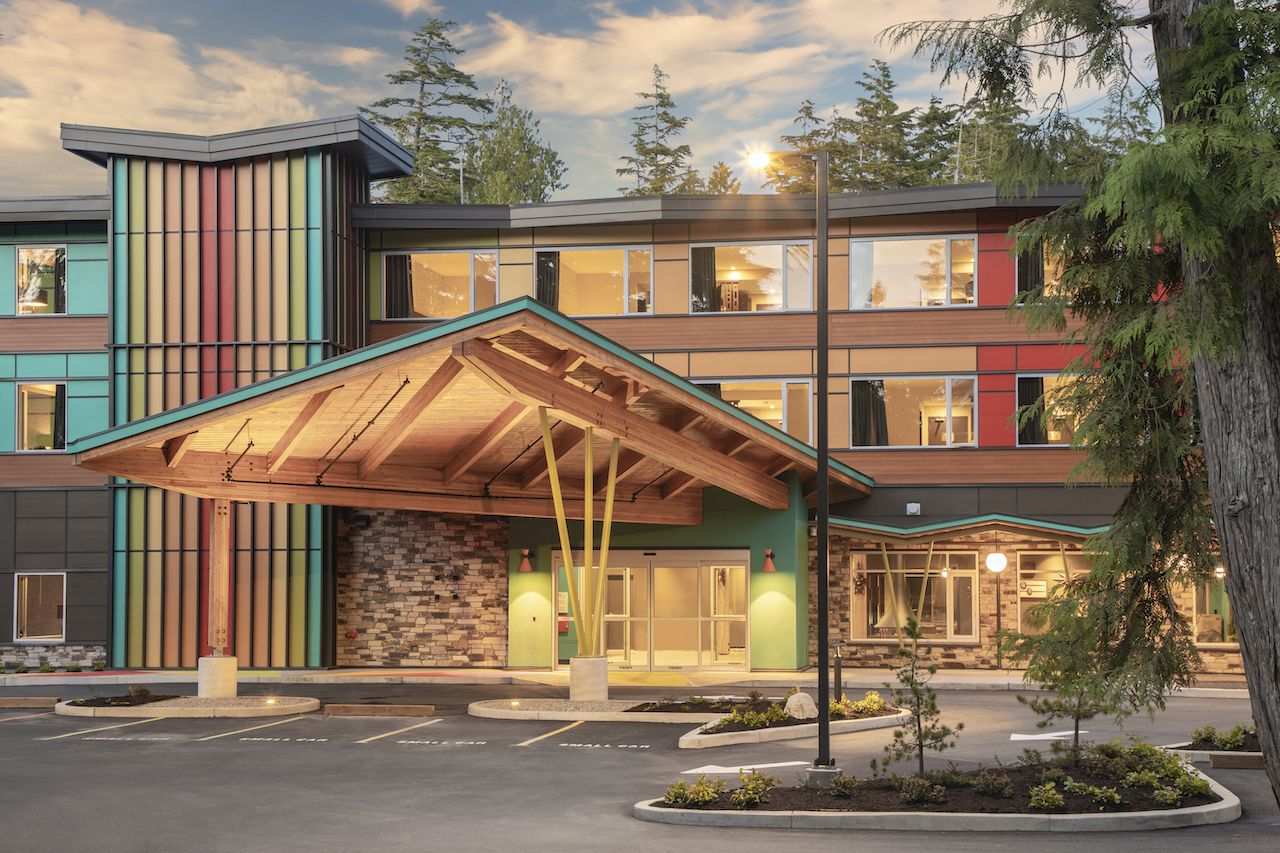 The new Hotel Zed was the Tribal Park Allies first accommodation partner. Stepping into the technicolor ‘70s-inspired lobby, guests are immediately greeted by three large-scale historical photos of Clayoquot protesters. The hotel also worked with three local writers — one of them Gisele Martin of the Tla-o-qui-aht First Nation — to create a book, Iisaak in the Garden, which (post-COVID-19) will be in every guestroom and tells the story of the protests. “When people come here, they have this amazing experience because the land is so unreal, and this education just makes that connection a lot stronger,” says Trina Notman, vice president of communications for Hotel Zed, who spearheaded the book’s creation.

Arriving at another Tribal Park Ally business, Common Loaf Bake Shop, travelers are greeted by the heady aroma of fresh bread and coffee instead of photos, but these places are no less devoted to the cause. Maureen Fraser, the owner of Common Loaf, was one of the Tla-o-qui-aht’s original allies, a key figure in the decades-long Clayoquot protests and an original member of Friends of Clayoquot Sound.

“Moses Martin gave me an honorary Tribal Parks Allies designation,” says Fraser. Throughout the uprising, the bakery supplied food to protest camps and acted as a place of refuge. “Everyone that lives and visits this area is benefiting from the fact that First Nations have been guardians of this landscape for thousands of years,” says Fraser. “I regard the Tribal Park Allies program as an acknowledgment of that.”

A core tenet of Tribal Parks Allies is the notion that reconciliation begins at a community level. “Reconciliation starts with each individual learning and trying to comprehend what has happened up until now in Canada, and then doing what they can to rectify the injustices,” says Fraser. “I hope travelers will start to pay attention to businesses that are supporting First Nation aspirations in the same way that they’re paying attention to the places that are serving wild seafood,” explains Fraser.

As a visitor or local, the close connection to the land in Tofino is undeniable. A sense of reverence before nature is easily felt in the morning veil of fog and in the cold, choppy ocean surf. In the briny flavor of fresh oysters, and in the towering old-growth trees that reach for a grey, coastal sky. The mistake is to see ourselves as separate from this wild landscape. 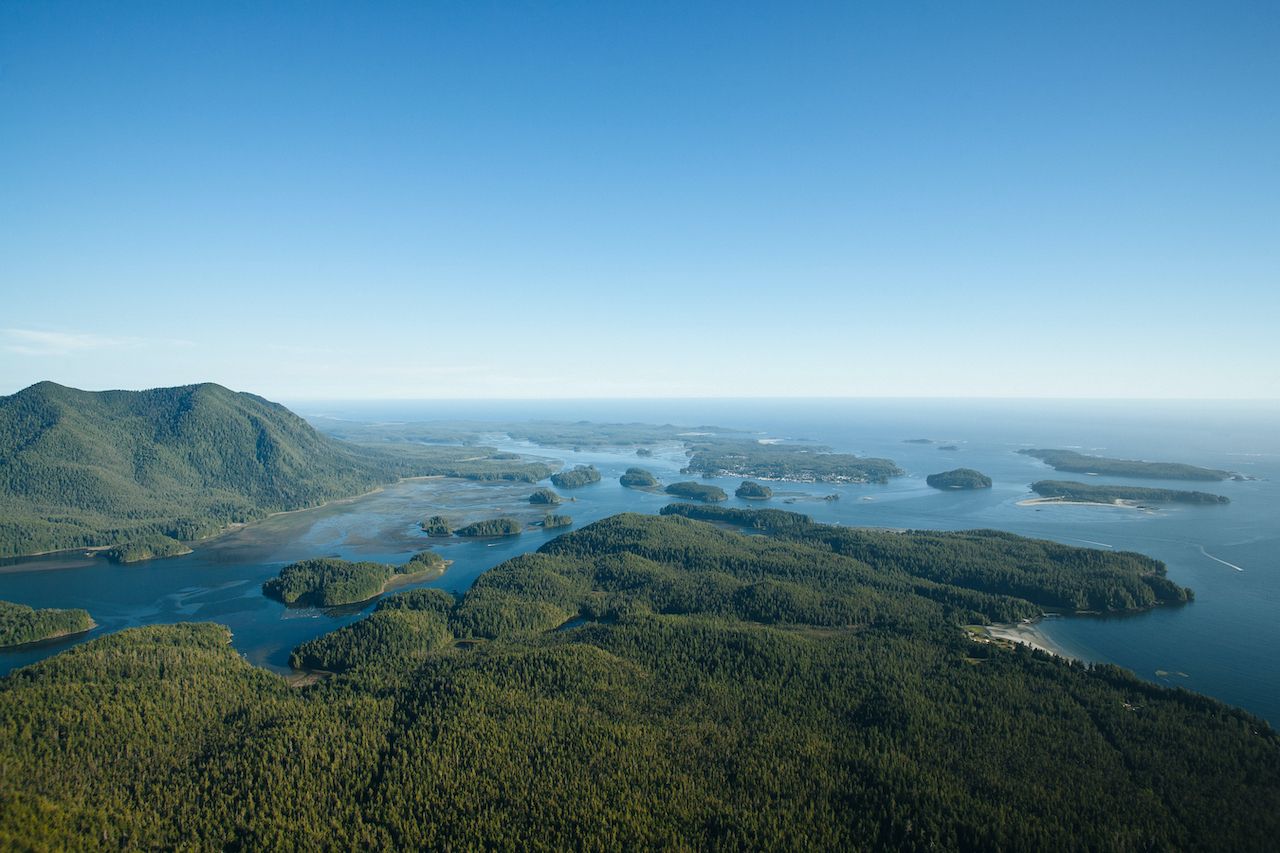 “We’re trying to reconceptualize conservation in that way,” says Hockin-Grant. “The difference between a national park like Pacific Rim National Park Reserve and a Tribal Park is that for Tribal Park communities, people have to be recognized and accounted for as a keystone species in the ecosystem,” explains Hockin-Grant. “Beyond any natural processes, it’s political decisions and community decisions that lead to the enrichment or degradation of an ecological system.”

Even living through a violent cultural genocide and systemic racism that persists to this day, Martin is hopeful about rebuilding First Nations’ relationship with Canada’s non-Indigenous people. A courageous, compassionate choice that should inspire a desire for meaningful reconciliation within us all. “The other main principle we live by as First Nations is ‘heshook-ish-tsawalk’,” says Martin, gesturing across Clayoquot Sound from behind the wheel of his motorboat. “It means everything is one, we are all connected.”

How To Have the Perfect Winter Trip in Tofino, Canada

Tofino's Hot Springs Cove: How To Have This Amazing Canadian Experience