It’s hard to keep track of the number of different languages and dialects you’ll hear in Kensington Market in downtown Toronto on any given day. Nearly half of the population is foreign-born, and some 200 languages are spoken in the city. The market area has historically been a gathering point for immigrant communities, and the diverse restaurant landscape reflects that.

I see this firsthand as I wait to try a momo (a type of Tibetan dumpling) for the first time at the Tibet Café and Bar, one of four Tibetan establishments in the area and the only restaurant. Owner and chef Tenzin Yewong brings me two steamed momos, one vegetarian and one beef. They look like dumplings, only bigger and round instead of half-moon shaped. Paired with the homemade hot sauce, they make a zesty introduction to Tibetan cuisine.

Yewong learned to cook Tibetan specialties from her mother. When she started her restaurant, she chose Kensington Market because of its inclusivity. She says, “[it] is homey and you never feel out of place. The businesses here support each other. I have many fond memories from the past 11 years.” 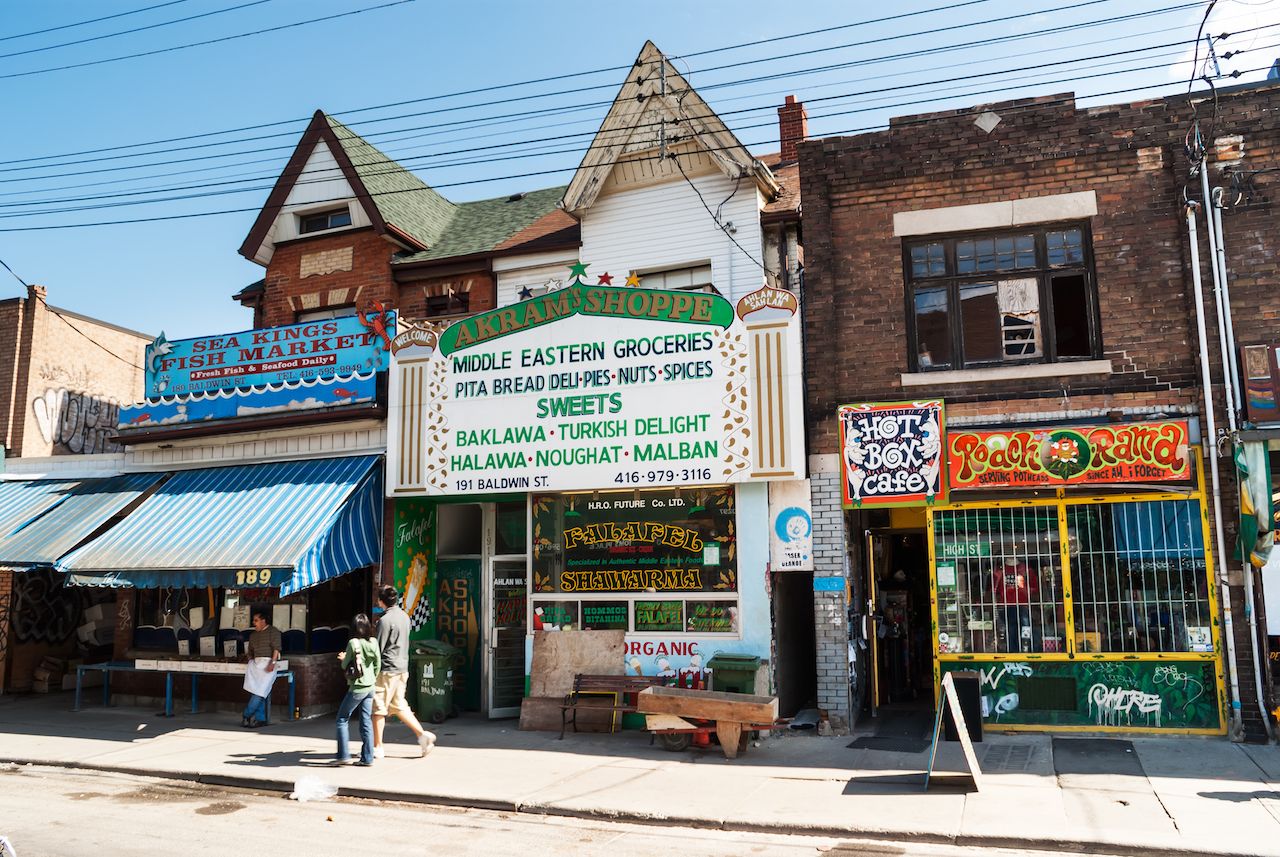 Kensington Market has a history of welcoming people of all backgrounds. It was a Jewish market in the early 1900s. A large Portuguese population moved in in the 1950s, followed by Chinese, Indians, Koreans, Vietnamese, and Filipinos. People from Latin America started moving in in the late 1980s. Chef John Lee, a consultant, restaurateur, and professor at George Brown College’s Center for Hospitality and Culinary Arts, says the market “has always been a first stop for many an immigrant and transplant to the area. The influence of the first Jewish refugees to the area is evident in the spirit of the people that have welcomed others for over a century who are fleeing persecution, oppression, and poverty from all corners of the world.”

Today, Kensington Market is a draw for artists and creative types alike and has a strong social network composed of “mom and pop” shops — and local owners work hard to keep it that way. Over the years, small business owners have successfully fended off large corporations like Nike and Walmart with organized protests, garnering more than 90,000 signatures in favor of preserving the character of Kensington Market. 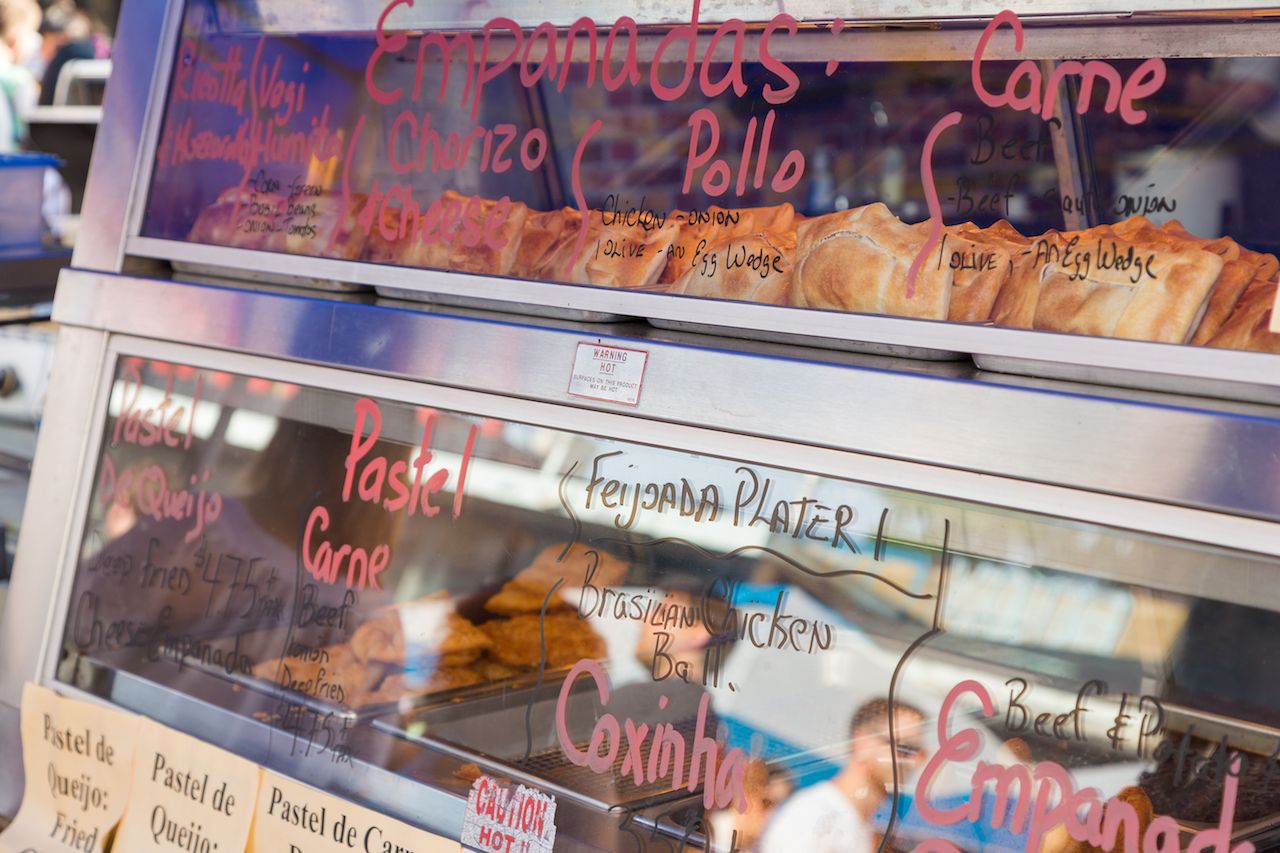 Thanks in part to this dedication to local owners, Kensington Market is still an international food hub where you can eat authentic Chinese spring rolls, Jamaican patties, and Canadian poutine all in the span of a few blocks. In the spring and summer months, the streets come to life with long lines from the most popular establishments spilling out onto the sidewalks. Smells from baked, fried, and sautéed goods waft through the air, pulling guests in all directions.

Lee recommends visiting on the last Sunday of each month for Pedestrian Sundays. The streets are blocked off to traffic, and the market is “turned into an open walking fair showcasing street food, performers and all manner of arts and crafts for sale.” 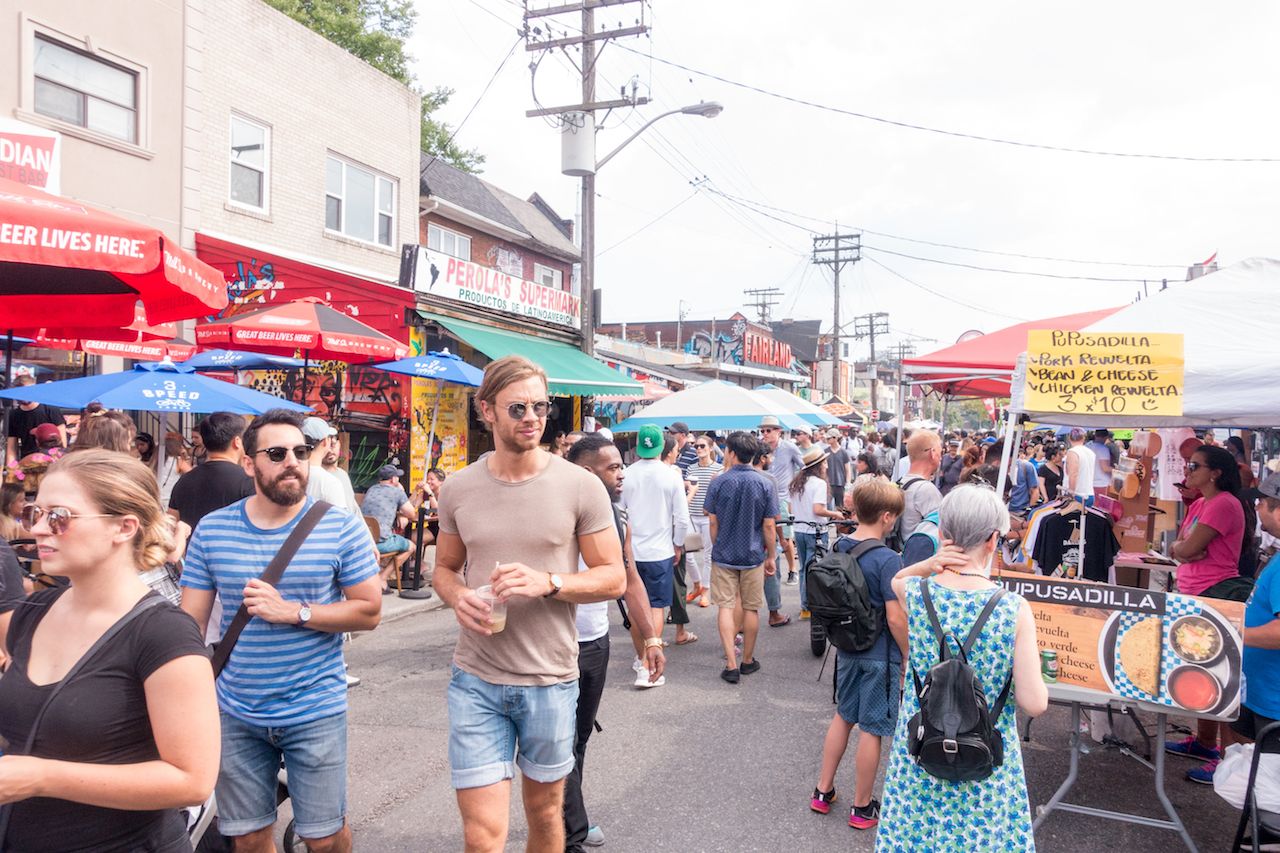 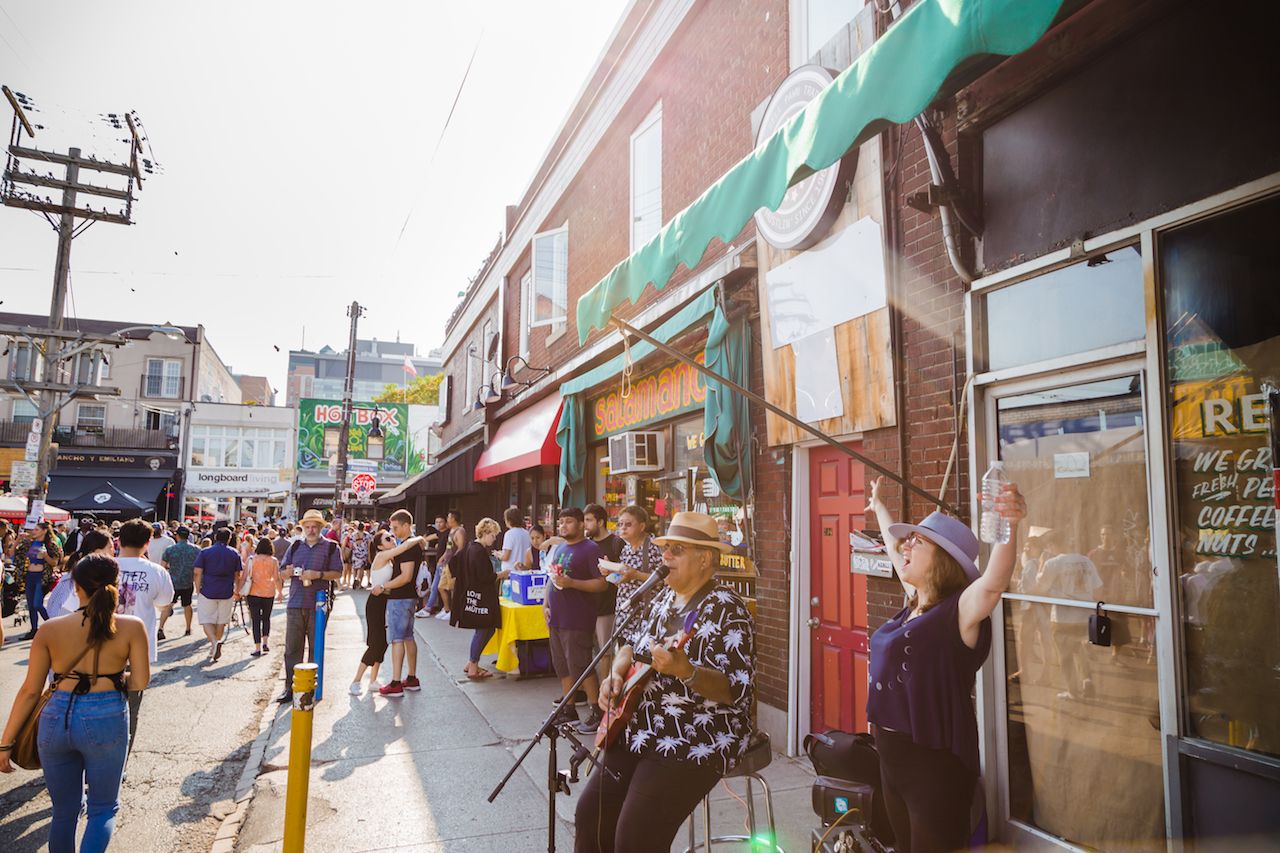 Those wanting a guide to the tasting process can turn to Tasty Tours Toronto, a company that highlights unique food options and engaged businesses in the area. Founder Audrey Ooi explains that when choosing locations, “Ideally the owner or staff has the time and interest to share their story with tour guests, as the tour is about making connections through food.”

Connection through food is what happens at the Livelihood Café, a nonprofit that gives refugees a path to sustainable employment through training and new arrival assistance. It was there that I met Jasmine Yilmaz, a Syrian refugee and TEDx speaker who helps others overcome trauma.

Jasmine serves traditional Arabic tea, pouring the piping hot substance into a shot glass pre-filled with a sprig of thyme. She was forced to leave her home in Damascus because of her political beliefs and lost her family in the process. Upon arriving in Canada, she found renewed hope. She’s grateful to have a community where she’s accepted and can keep her culture alive by sharing one thing that’s of universal interest to us all — food. 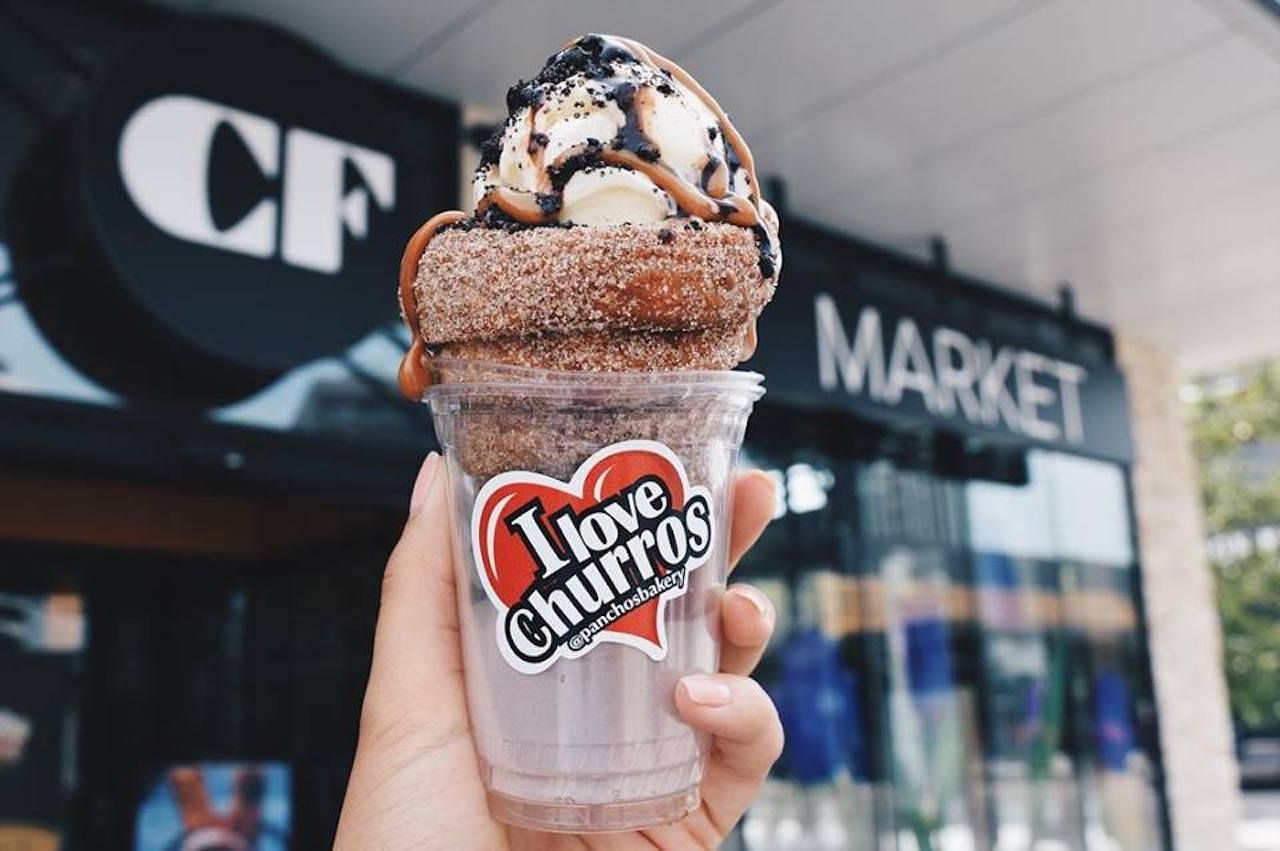 For dessert, I head to Pancho’s Bakery. The staff is wearing shirts that say “I Love Churros,” and I instantly feel a sense of kinship. This is churro heaven, serving everything from dulce-de-leche-stuffed churros to churro ice cream cones. After an afternoon of eating around the world, Pancho’s is the proverbial cherry on top.

It’s no coincidence that the most diverse city in the world also has the best food market. Kensington Market is proof that when cultures blend and support each other instead of building walls, the outcome is very palatable.

Food + DrinkThe 10 Most Epic Food Halls in the US
Tagged
Food + Drink Insider Guides Toronto, Canada
What did you think of this story?
Meh
Good
Awesome

The Best Airbnbs in Downtown Toronto, From the Harbourfront To the CN Tower