While tiny in area, Ecuador has it all when it comes to food. The platos típicos, or traditional dishes, vary widely depending on the culture and climate in each region. Despite some similarities, you can find differences in the main three geographical regions: Costa (along the coast), Sierra (the mountainous region), and Oriente (the east, where you’ll find the Amazon). There are Ecuadorian food specialties that incorporate medicinal plants from indigenous tribes and those that draw from religious customs from Spain. And, of course, the hearty comfort foods for chilly nights in the Andes mountains.

Lunch is what unites the country. As the most important meal of the day, you can expect heaping platefuls of food. Families sit down to a courses-long menu with soup, a main, dessert, and a drink.

With such a range of traditions and geography, there’s always something to try in Ecuador. Don’t miss these 12 dishes, drinks, and desserts. 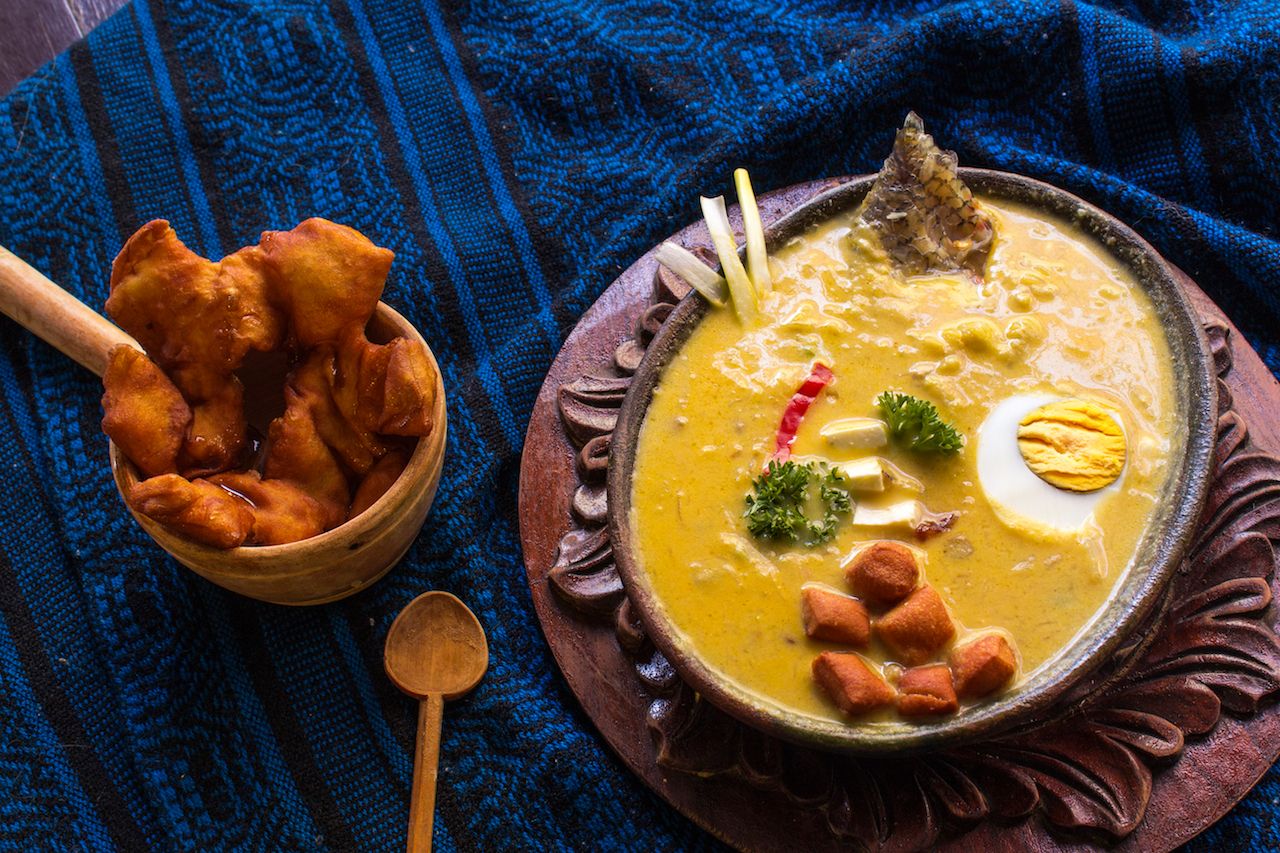 This lentil soup is an Ecuadorian smorgasbord served only during Easter and Lent. Fanesca takes days to prepare and uses 12 local legumes and grains to represent the 12 apostles. Salt fish, a food connected with Jesus, is the basis of the broth. Outside of these ingredients, each chef has a coveted personal recipe. 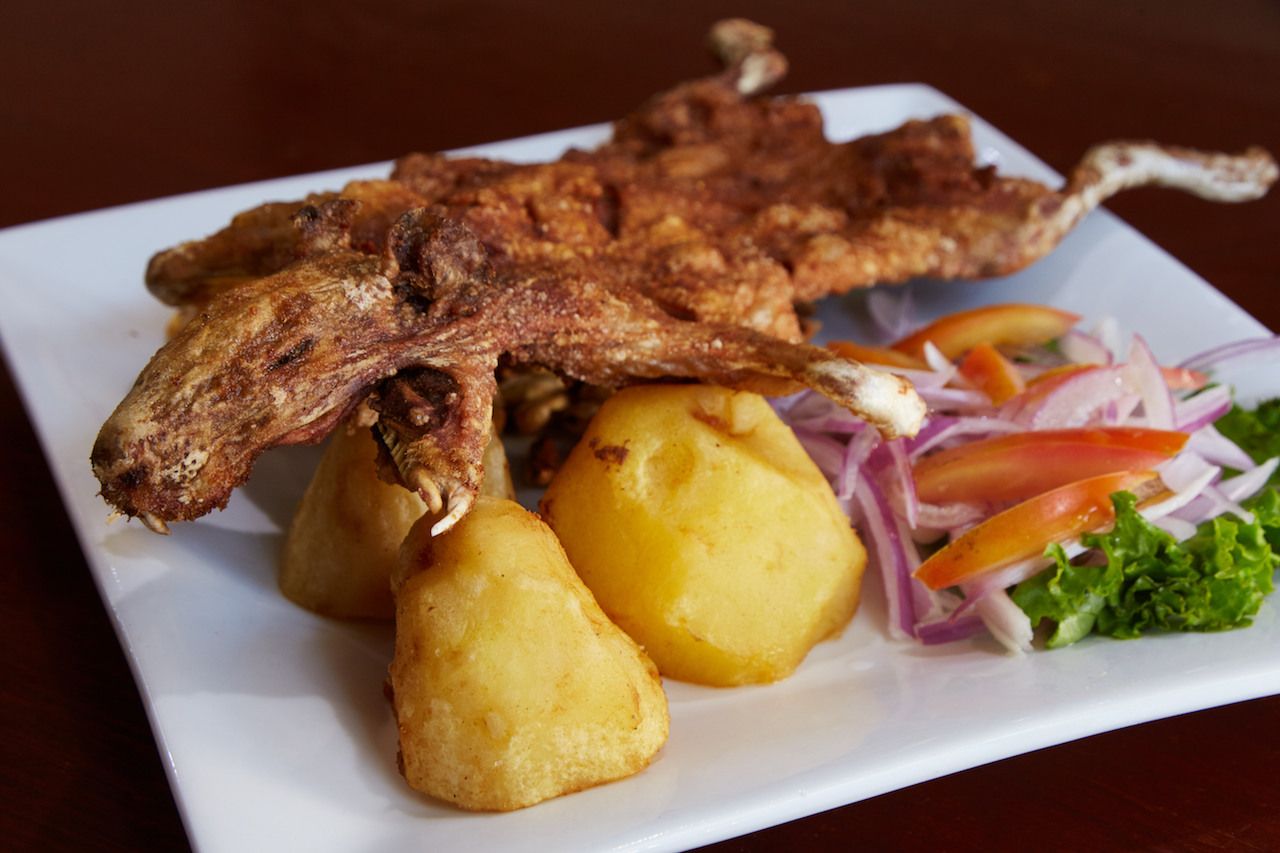 Cuy, or guinea pig, could be called the “turkey of the Andes” because its flavor and texture is very similar to dark-meat poultry. These grass-eating, space-saving animals are one of the most sustainable types of livestock on Earth.

It’s served fried, which can be a bit greasy, and al horno, or baked. Often, a full cuy is roasted on a spit above potatoes, which catch the drippings and are served as a side dish. Cuy is served whole or quartered and is almost always presented with the head. Specialty cuy restaurants sell them as full meals with potatoes and salad, just look for cartoon guinea pigs on storefronts to find it. 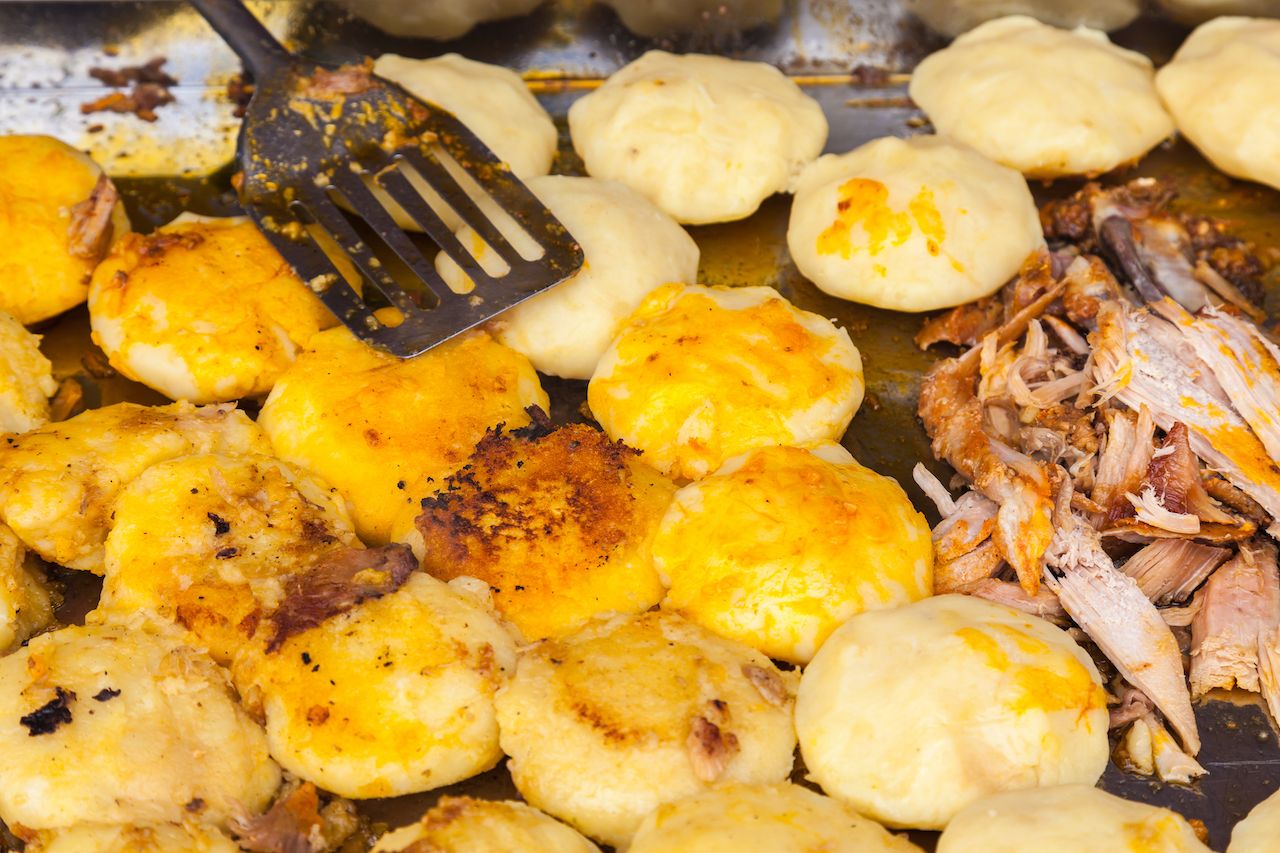 Llapingachos ( pronounced yap-in-gah-chos) are fried cheesy potatoes that are fun to say and to eat. They’re made with balls of potato dough stuffed with stringy cheese that’s fried flat like pancakes. These cheesy, crunchy snacks are served with aji, a spicy Ecuadorian fresh salsa made with local chili peppers. You’ll see llapingachos both as a side dish and street food in markets across the country. 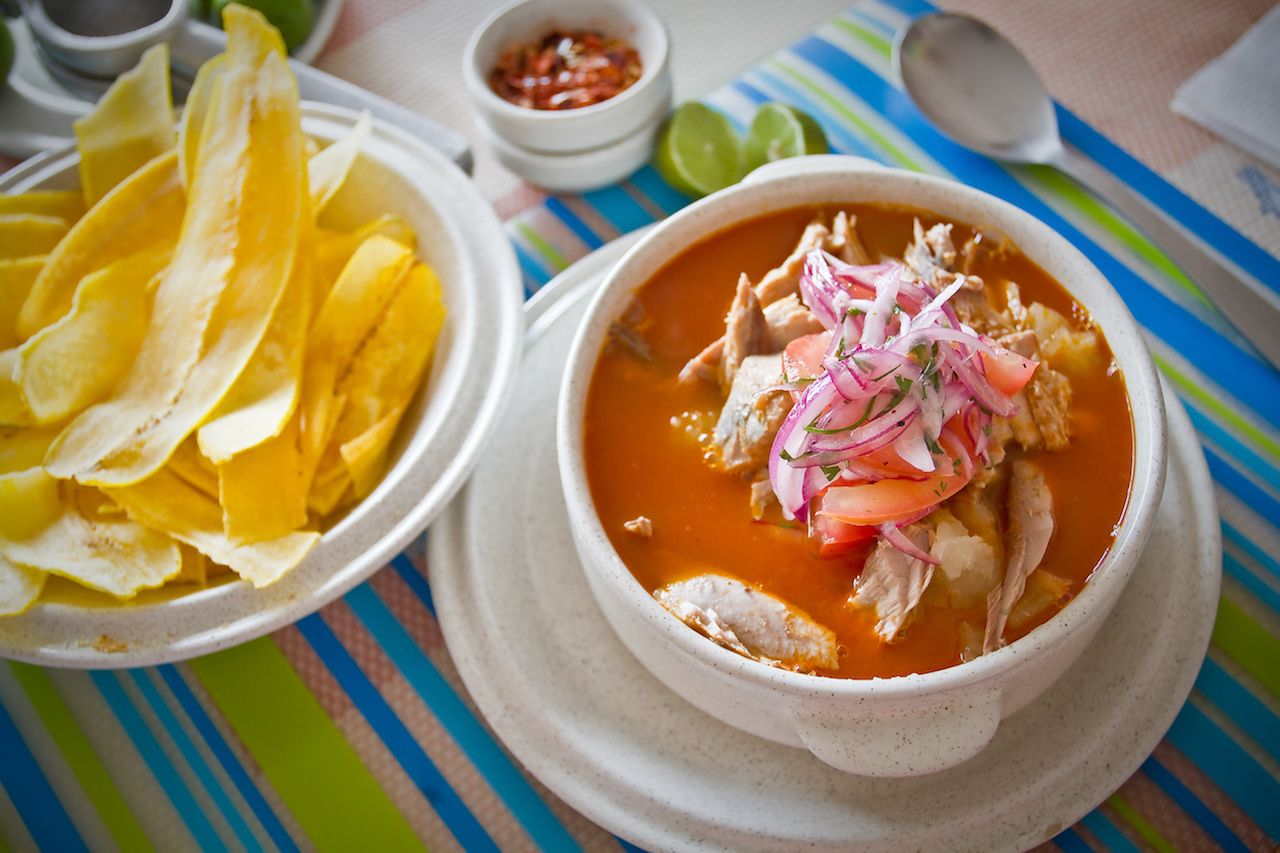 Ecuador’s national dish is also the country’s hangover cure. This comforting tuna soup is made with cassava, a sweet and stomach-soothing root vegetable; tomatoes; and onions. Encebollado, meaning “onion-ed,” gets its name from the red pickled onions used to garnish the top. This soup is found all along the coast but also in major city centers, helping locals perk up after a night out dancing to cumbia or bachata. 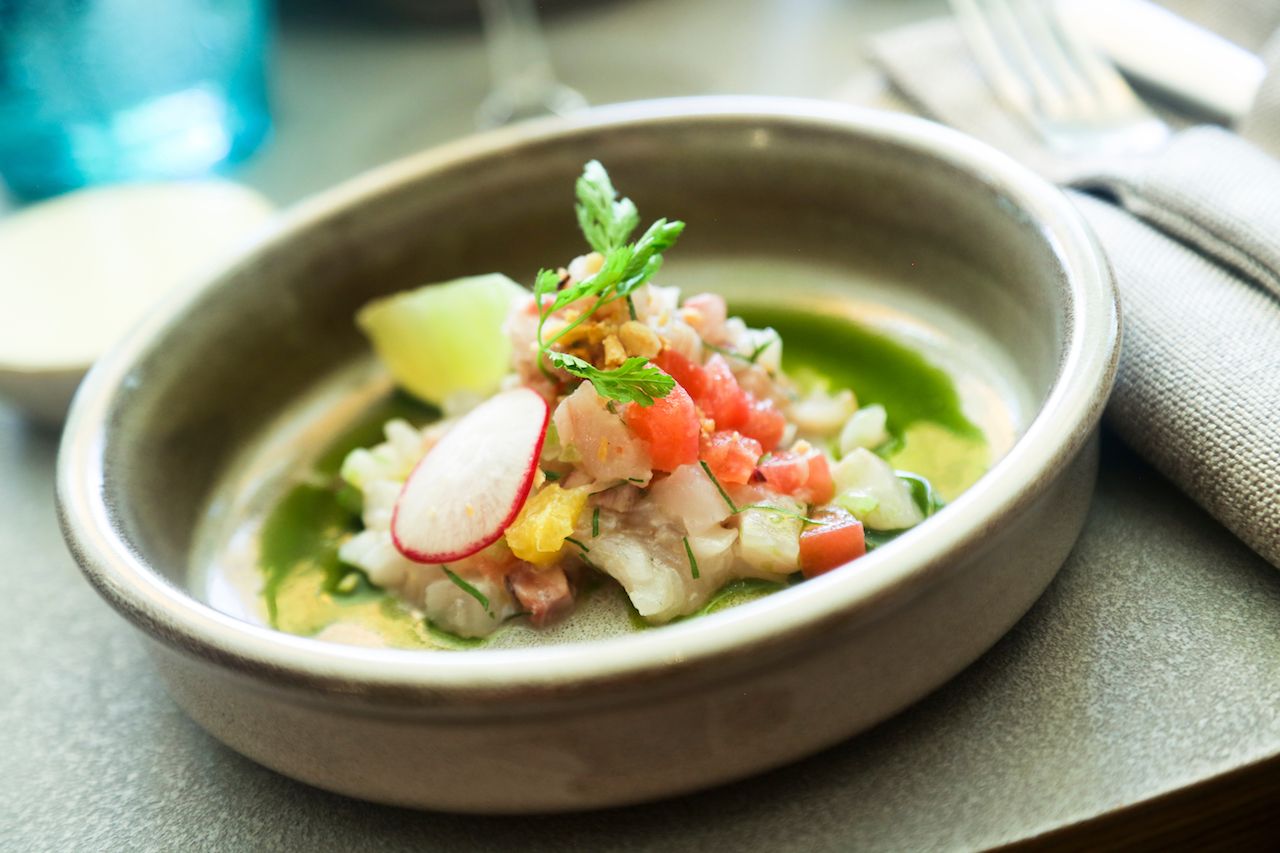 Those who love fish with lemon will swoon for this seaside specialty. They’ll also get a taste of a major food controversy over whether ceviche originated in Peru or Ecuador.

Ceviche is prepared by soaking raw fish or seafood in a citrus broth. The acid in the citrus denatures the proteins, and the fish becomes firm as if cooked with heat. Along the country’s beaches, Ecuadorian ceviche comes in a cold bowl of leche de tigre (“tiger’s milk” made with lemon, onion, cilantro, and fish broth) with a side dish of popcorn. 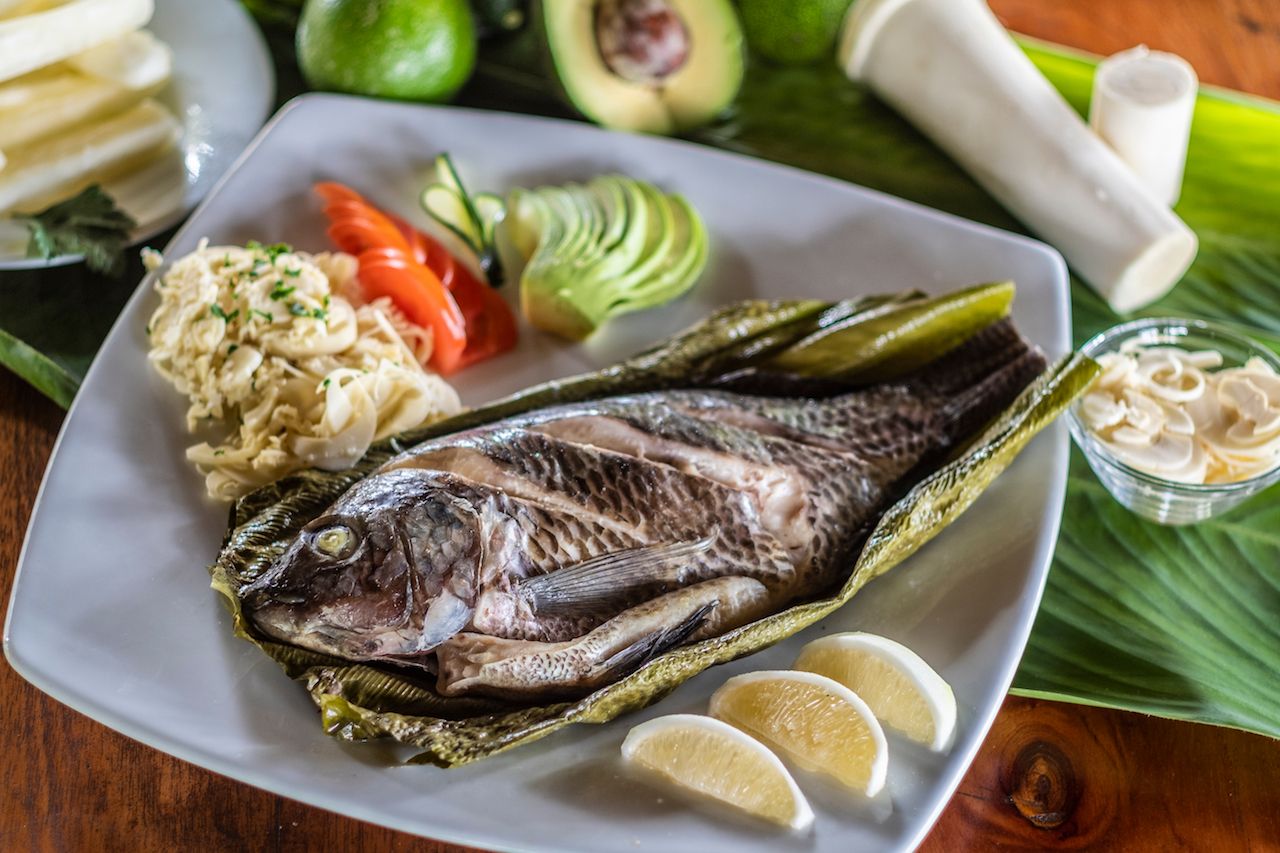 Trucha, or trout, may be an invasive species in Ecuador, but it’s also become a staple in Andean cooking. Scored and roasted in an oven, the crispy skin of the trout keeps the inner meat juicy.

Fishing ranches in the Andes offer a chance to catch your own or sit down for a plate at the on-site restaurant. Like most meats here, trucha is served with starchy side dishes of mote (large savory corn kernels), rice, or potatoes.

You’re probably familiar with the creamy Spanish or Mexican version of horchata, but Ecuador’s take on the drink is quite different. Typical to the province of Loja but consumed country-wide, Ecuadorian horchata is a fragrant, bright pink-red herbal tea made with wildflowers, herbs, and sweetened with honey. Each family’s recipe is distinct and can include more than 12 medicinal ingredients said to aid digestion, memory, and decrease inflammation. Horchata can be consumed hot as a tea or chilled. When cold, the iced tea is sometimes called agua fresca, or fresh water. The beverage is widely available in cafes and markets and is always steeping on local stovetops. 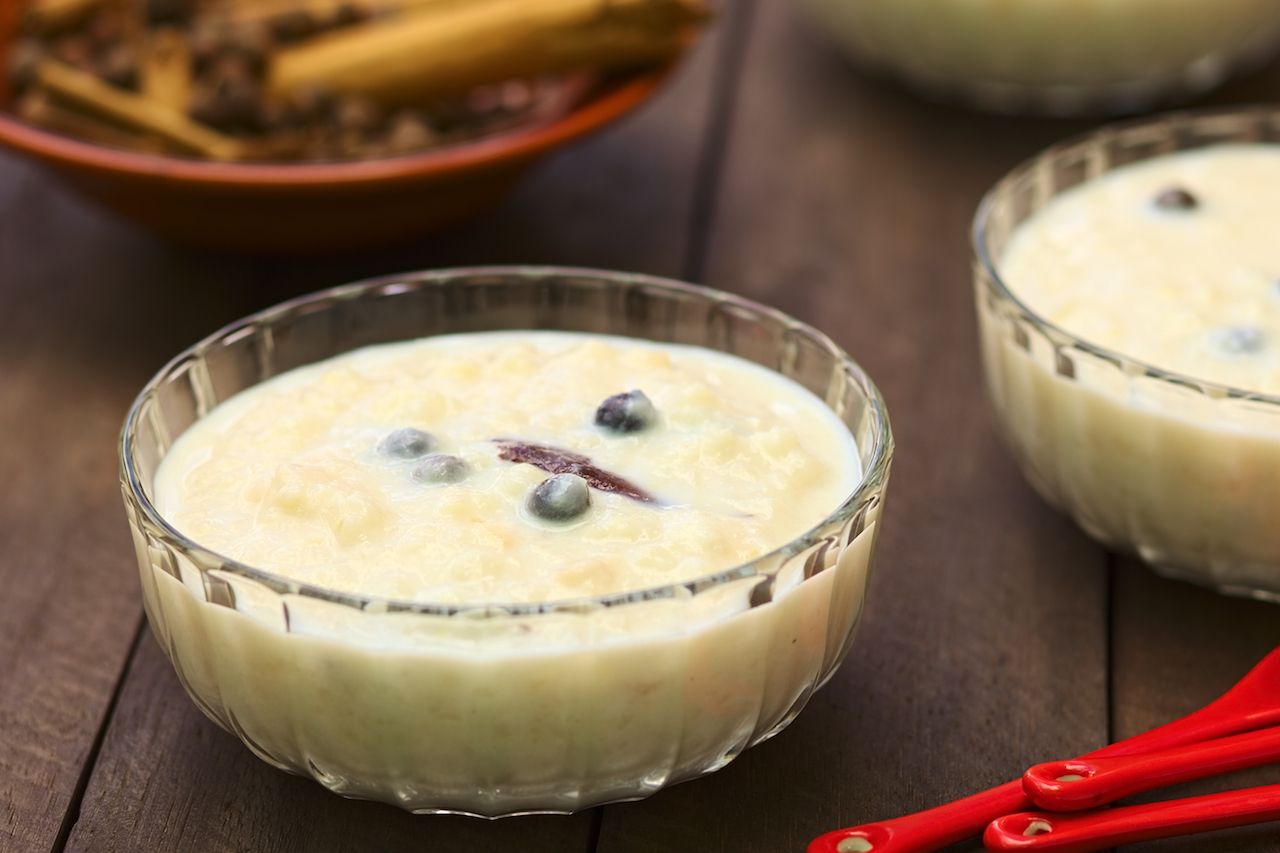 Ecuador’s ultimate creamy comfort food. Morocho is made with cinnamon, ground mote (a savory corn), milk, sugar, and raisins. The mote has a texture like oatmeal and sits on the bottom of the glass. Morocho is a popular breakfast food in markets, on menus in some restaurants, and now has popped up in a few fast food chains paired with empanadas. 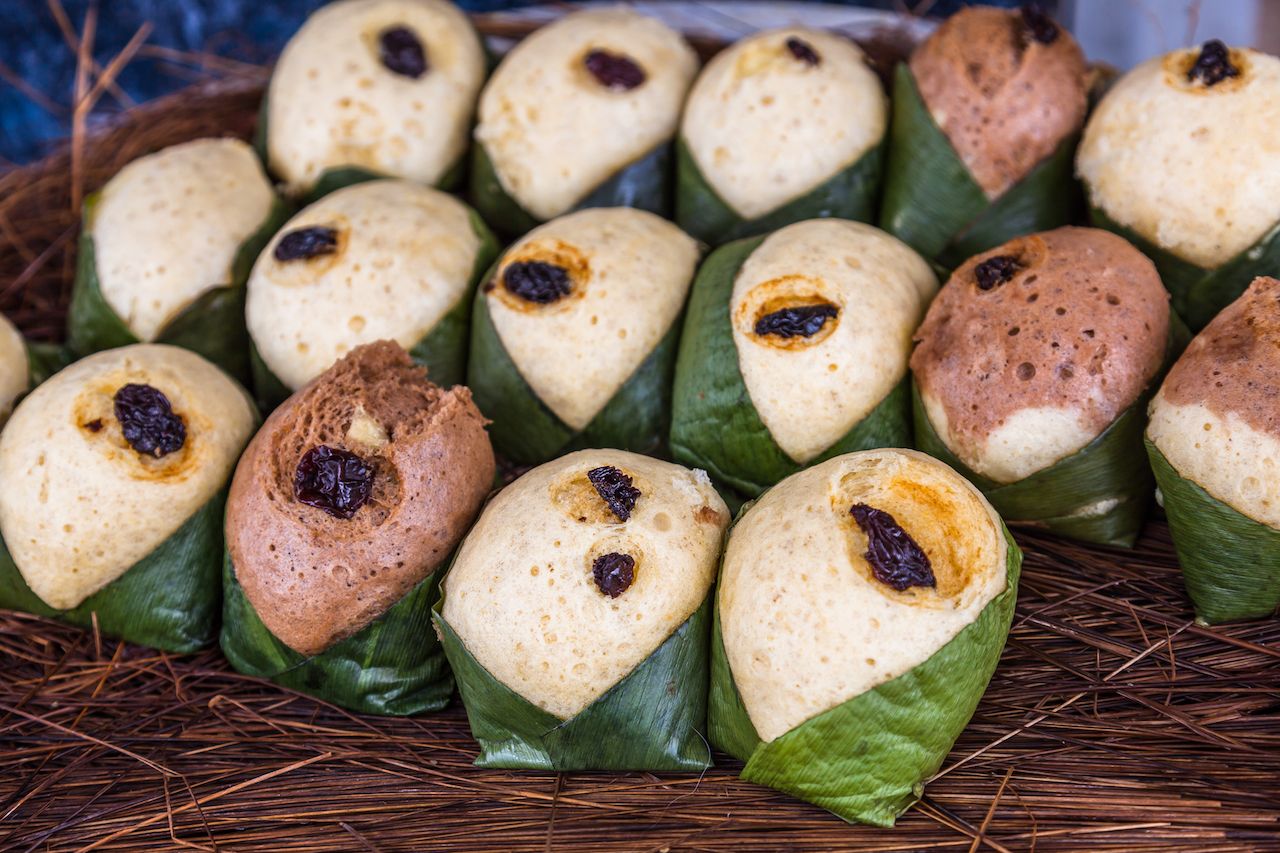 These cozy, buttoned bundles are a common sight in pastry shop windows and on cafe menus. Quimbolitos are a palm-sized sweet cornbread speckled with raisins and steamed in a banana leaf to lock in flavor and moisture. The batter is a mix of corn, wheat flour, sugar, and creamy cheese that adds a pleasant saltiness. Many locals enjoy quimbolitos during cafesito, or afternoon coffee. 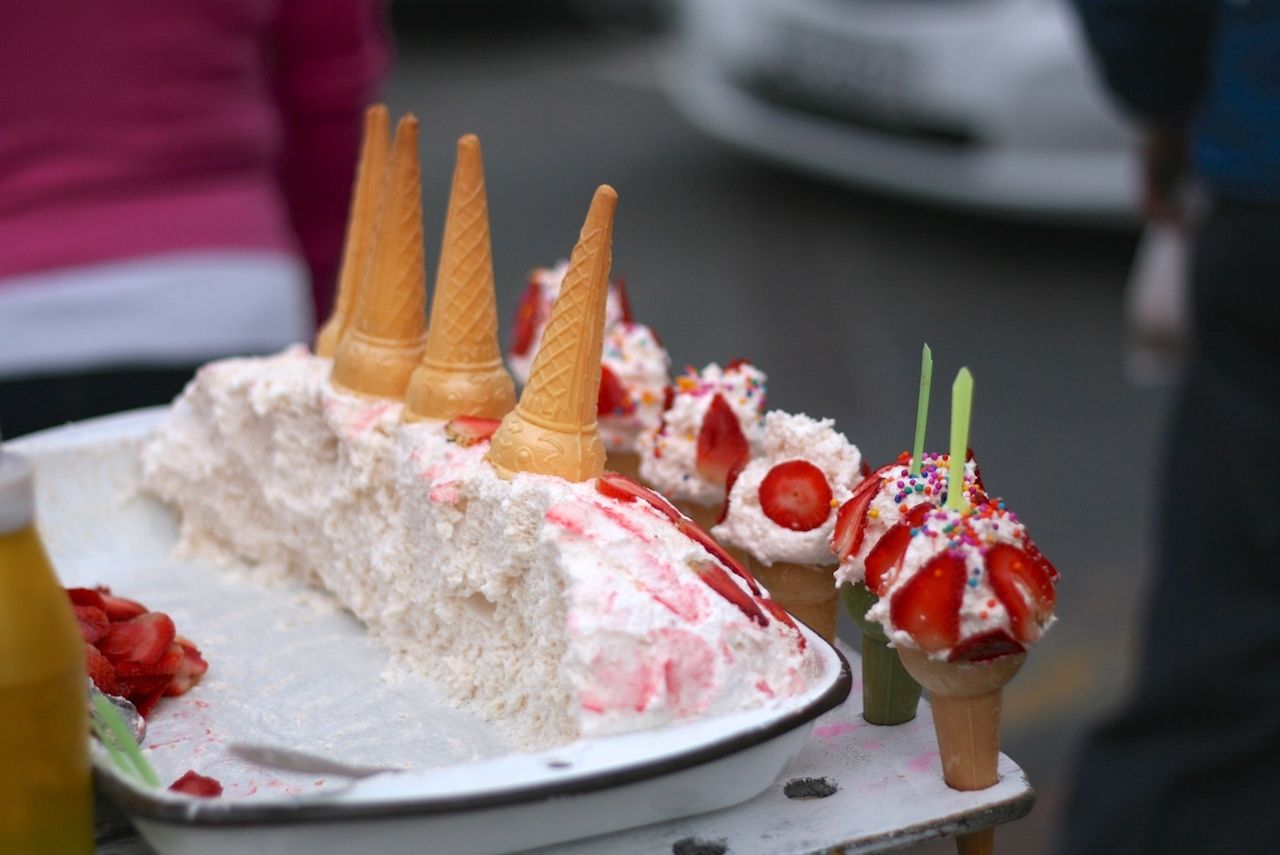 Espumilla means “mousse,” and this raw meringue dessert is made with fruit, egg white, sugar, and vanilla or chocolate depending on what flavor you order. It’s sometimes decorated with candies or fresh berries and is used as a jello topping. Often, this sweet, whipped dessert is served up on cones, making it easily mistaken for ice cream.

Find it at colorful, swirling espumilla carts in city plazas that cater to the families who gather there after school. 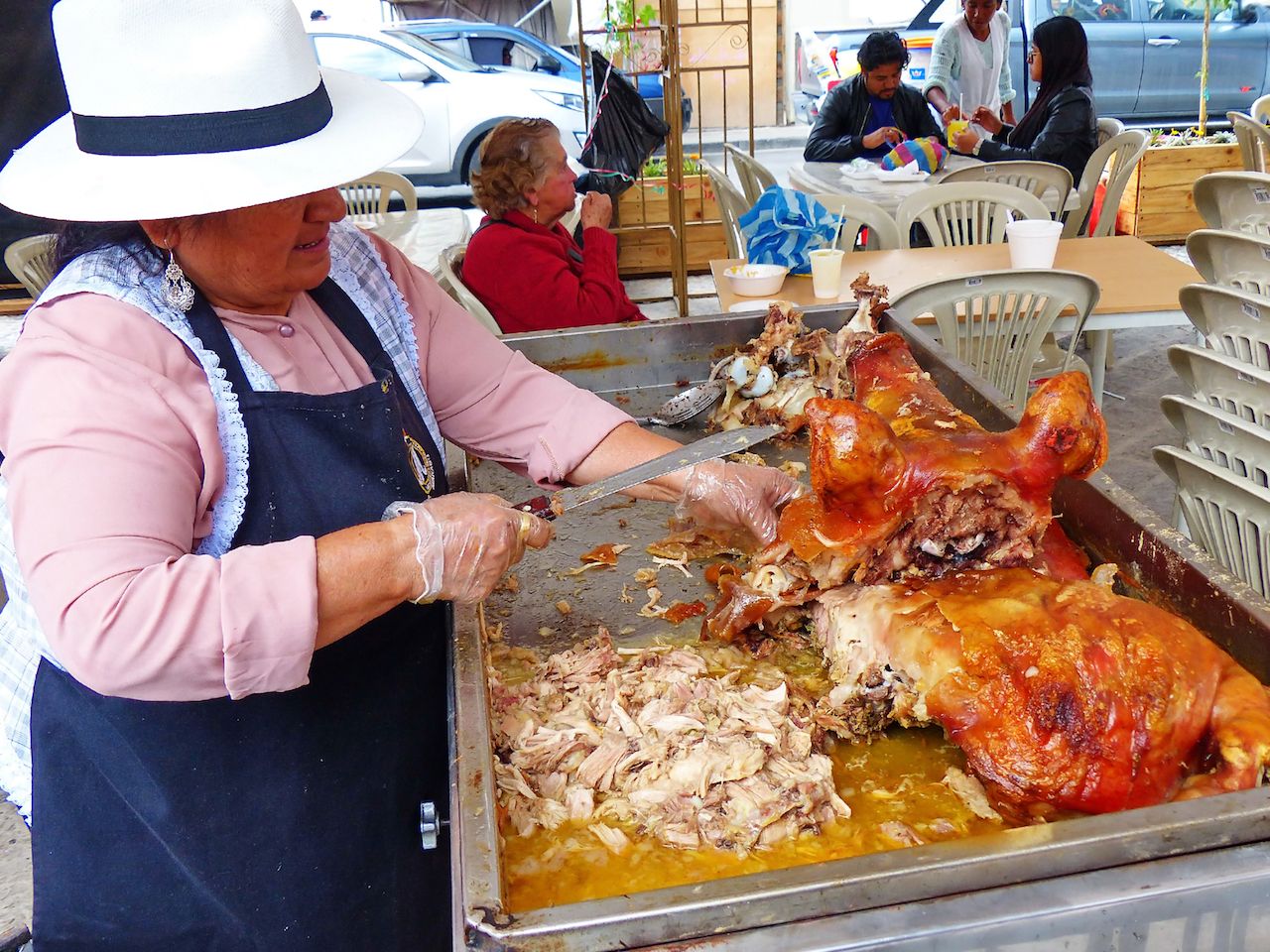 Hornado is Ecuador’s slow-roasted pig on a spit. Juicy meat is served with pieces of decadent crackling, which is the crispy, salty skin.

At markets, you’ll hear a section of vendors shouting and waving samples to entice you away from the competition. Once ordered, the owner selects the most succulent pieces of meat, tops them with crunchy skin, and places it all on a bed of mote or potatoes. Then, the dish is sprinkled with a handful of fresh onions, tomatoes, and cilantro to add freshness.

Ecuador’s most famous hornado is found in Riobamba and outside of Cuenca in the Gualaceo Market. 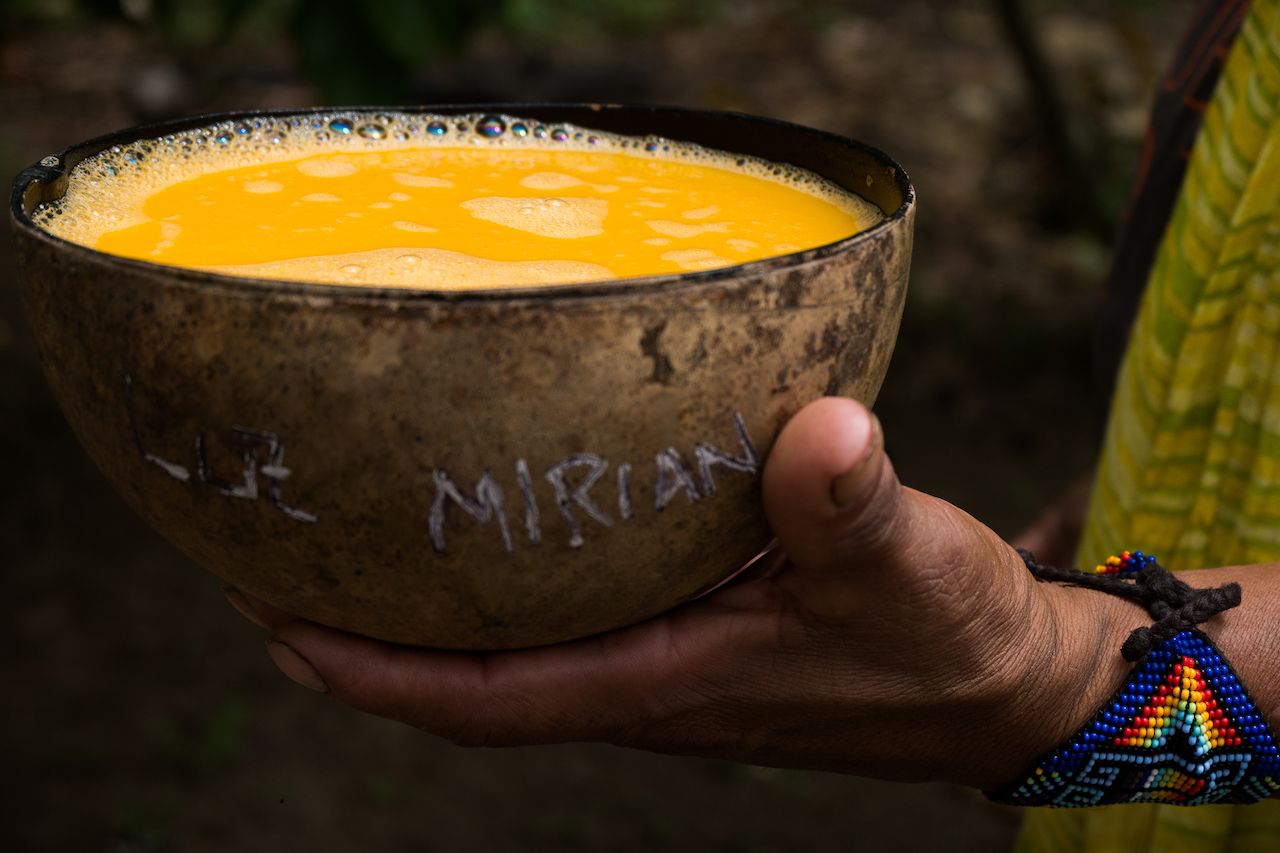 This “jungle beer” is a slightly sour and effervescent alcoholic drink made from fermented yuca, a starchy jungle root. Traditionally, chicha was made by the mouths of matriarchs in jungle tribes. The women would chew the yuca then spit it into a large gourd container. After a few days, the natural yeast and sugars in the mix fermented the liquid.

Today you can sample chicha spit-free in Ecuador’s rainforest towns, which is good because it’s a huge insult to turn down chicha. After all, it’s a very personal brew.

Insider GuidesEcuador Packs the Most Adventure Into a Small Space Better Than Anywhere Else in South America
Tagged
Food + Drink Ecuador
What did you think of this story?
Meh
Good
Awesome