Located in the middle of the Mediterranean Sea, Sicily is a small island teeming with a diversity of food. Just kilometers away from pebble beaches and shores of fish, its mountains once grew grains for the Roman Empire. Sicily also contains the only continuously active volcano in all of Europe, Mount Etna, whose past and present eruptions have enriched Italian soil. That soil, combined with mild Mediterranean winters, allows Sicilian agriculture to boom year-round. As a result, Sicilian cuisine is known for its fresh ingredients, which are often plucked from a nearby farm or garden just days or hours before.

Sicily is situated at the tip of Italy, a midway point between Greece and North Africa. Due to its geographic position, Sicily has absorbed cultural elements from every empire that has passed through its borders hoping to seize control of trade routes on the Mediterranean Sea. Sicilian cuisine blends Greek, Roman, Arab, Norman, and Italian flavors and ingredients. Take, for instance, couscous siciliano, a typical North African dish prepared with fish on Sicily. Or the Sicilian version of the Italian favorite linguine alle vongole (linguine with clams), which usually contains local ingredients like capers grown on the volcanic Aeolian Islands or pistachios harvested on Mount Etna.

Eating your way through Sicily is one of the best ways to enjoy what the island has to offer. Here are nine traditional dishes to start with. 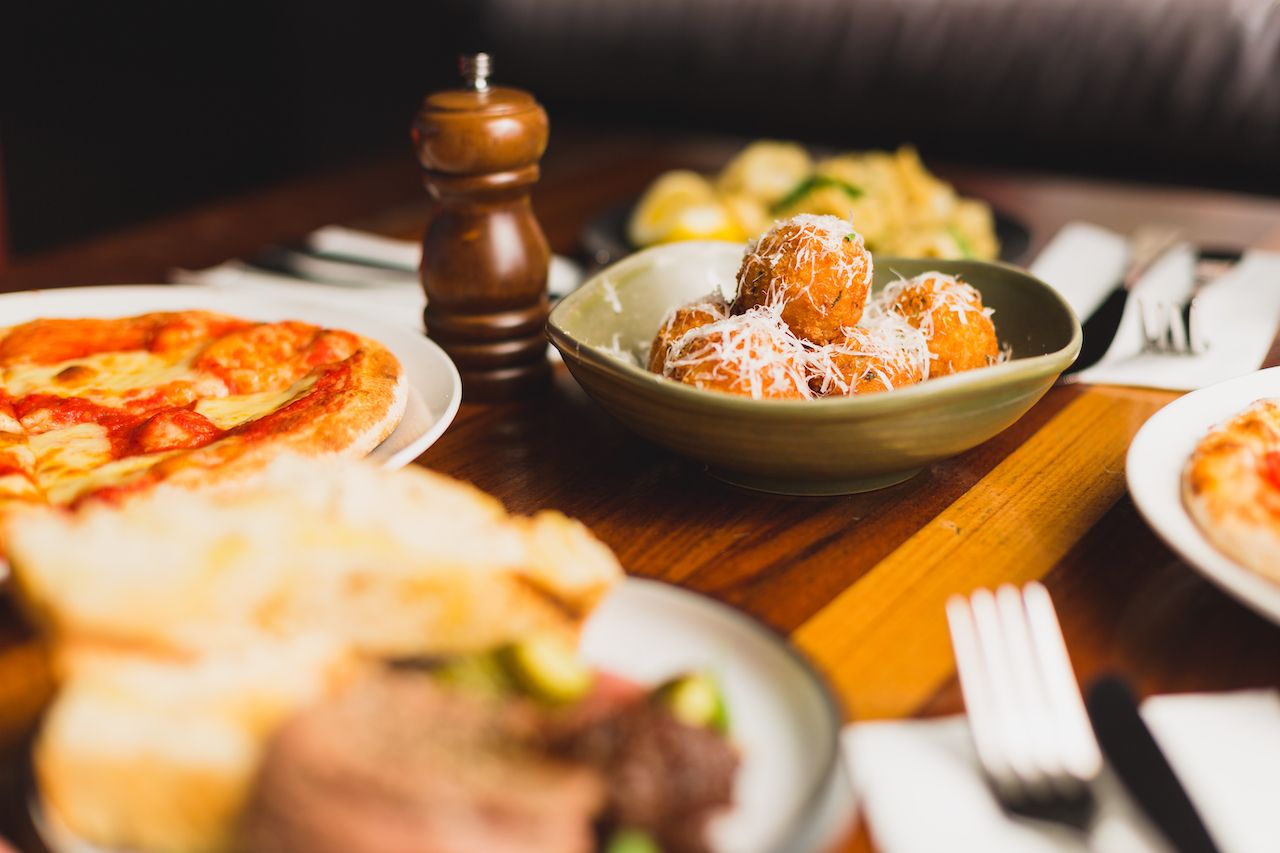 Sicily’s most famous street food, arancini, is fried rice balls with a mix of cheese, red sauce, and meat or vegetables inside. The name comes from arancina, or “little orange,” because of arancini’s round shape and color. In Eastern Sicily, they are sometimes conical to represent the mountainous terrain. The saffron used to make arancini suggests the dish probably originated in the 10th century during Arab rule of the island.

The most common version of arancini is al ragu, which is filled with meat, tomato sauce, and peas enveloped in soft cheese and saffron-infused rice. The meat could be pork, beef, or even veal, so those with dietary restrictions should enquire before eating. Arancini al burro is another popular flavor that mixes the deliciously salty prosciutto with mozzarella inside the rice balls. Other common types of arancini include spinaci (spinach), quattro formaggi (four cheeses), and funghi (mushroom). There’s also arancini al nero di seppia, which is arancini made with squid ink that dyes the rice black.

Ask if the arancini are fatti a casa or homemade and fresh (freschi). Some fast food places (like beachside restaurants) will either make or buy frozen arancini and then reheat the balls and serve them to customers, leaving the center slightly cold. The best arancini are piping hot when split open and paired with a local nero d’avola wine. 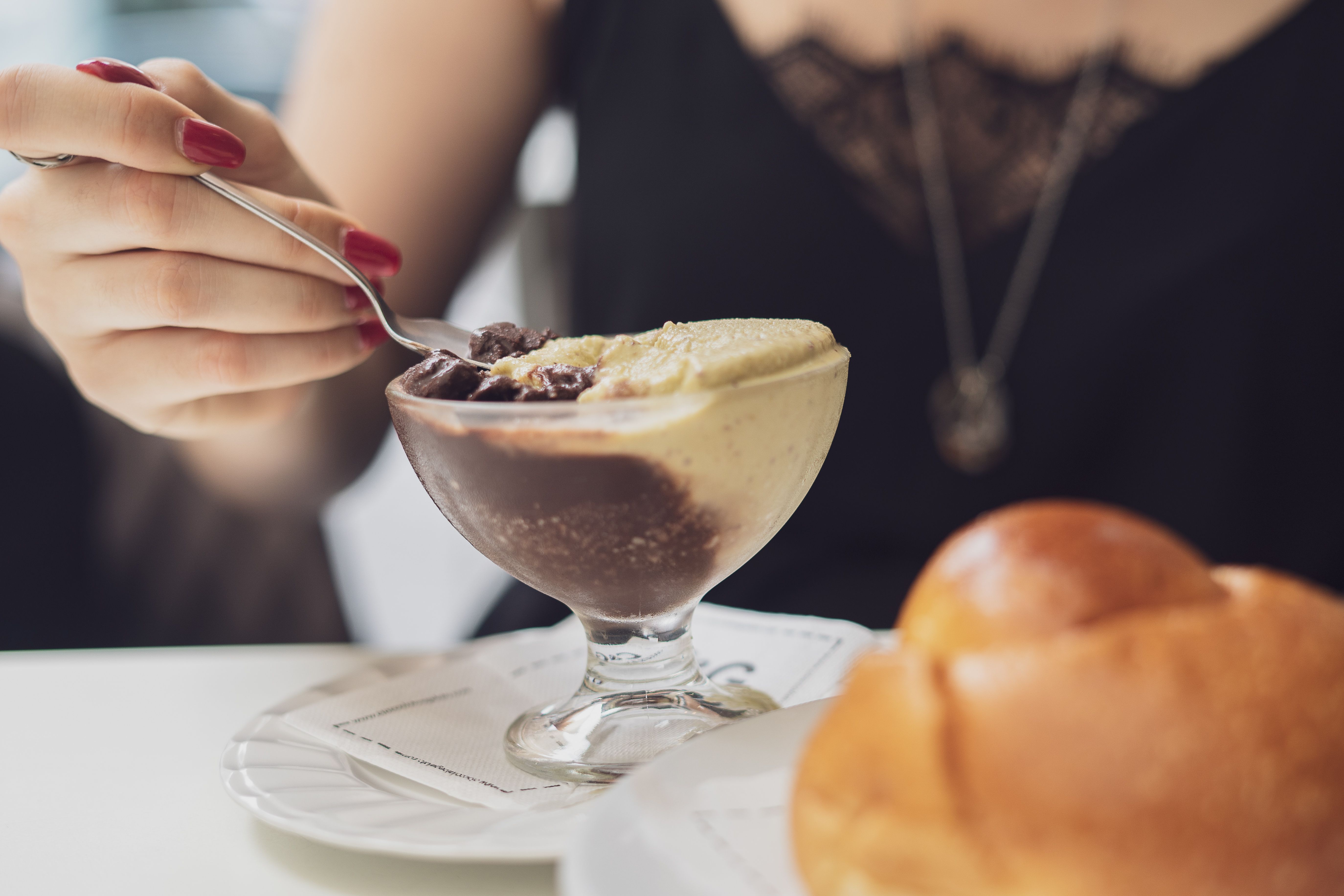 While many say that dessert comes last, in Sicily, dessert is for breakfast. Granita is one of the best accompaniments to a hot sunny day laying on the beach or walking down a cobblestone street. Granita is a fruity frozen ice mixture often eaten with a spoon or by dipping a brioche and soaking it up piece by piece. Granita is also often consumed with panna (homemade whipped cream) on top. Ask if the panna is homemade before ordering to make sure you get the real deal. Some gelaterias have 20 or more flavors to offer. Traditional fruity flavors include strawberry (fragola), lemon (limone), and blackberry (gelsi). Common sweet flavors include hazelnut (nocciola), chocolate (ciocolate), and coffee (café). Beware that ordering lemon granita with panna is a mortal sin — any Sicilian will warn that the acidic lemon ruins the dairy taste. 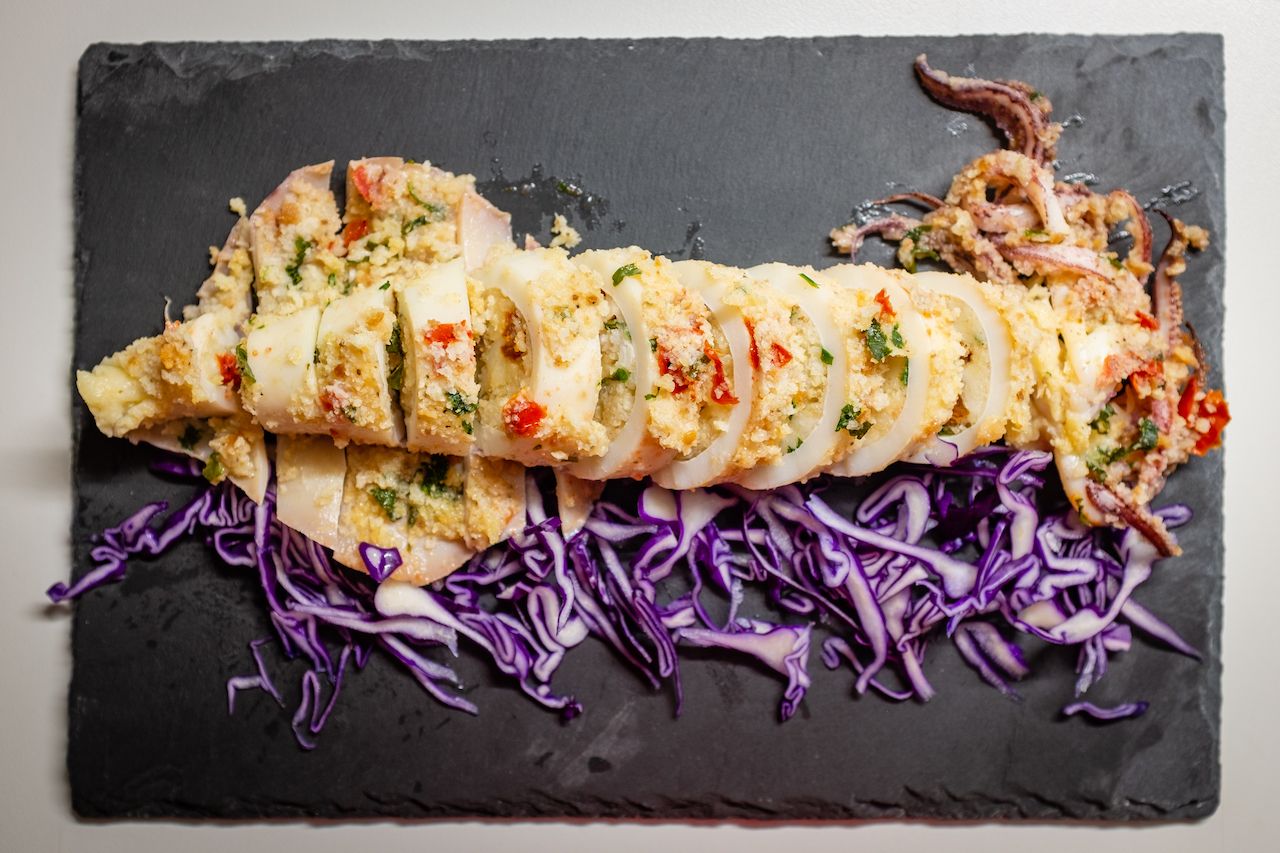 “L’uomo propone, dio dispone” is a popular Italian saying that means man proposes and god decides. The gods have blessed Sicilian waters with many fish and sea creatures, one of which is squid. Calamari ripieni is oven-baked squid stuffed with breadcrumbs, garlic, eggs, parsley, parmesan, salt, and pepper. Some recipes also blend in tomato or white wine.

It goes without saying that this dish should be ordered in a seaside town, preferably the kind where a port of fishing boats is just a short passeggiata (stroll) away. The narrow body of the squid contains the fillings while the tentacles are grilled and eaten on the side with a light drizzle of oil. Squirt a little lemon on top and enjoy. 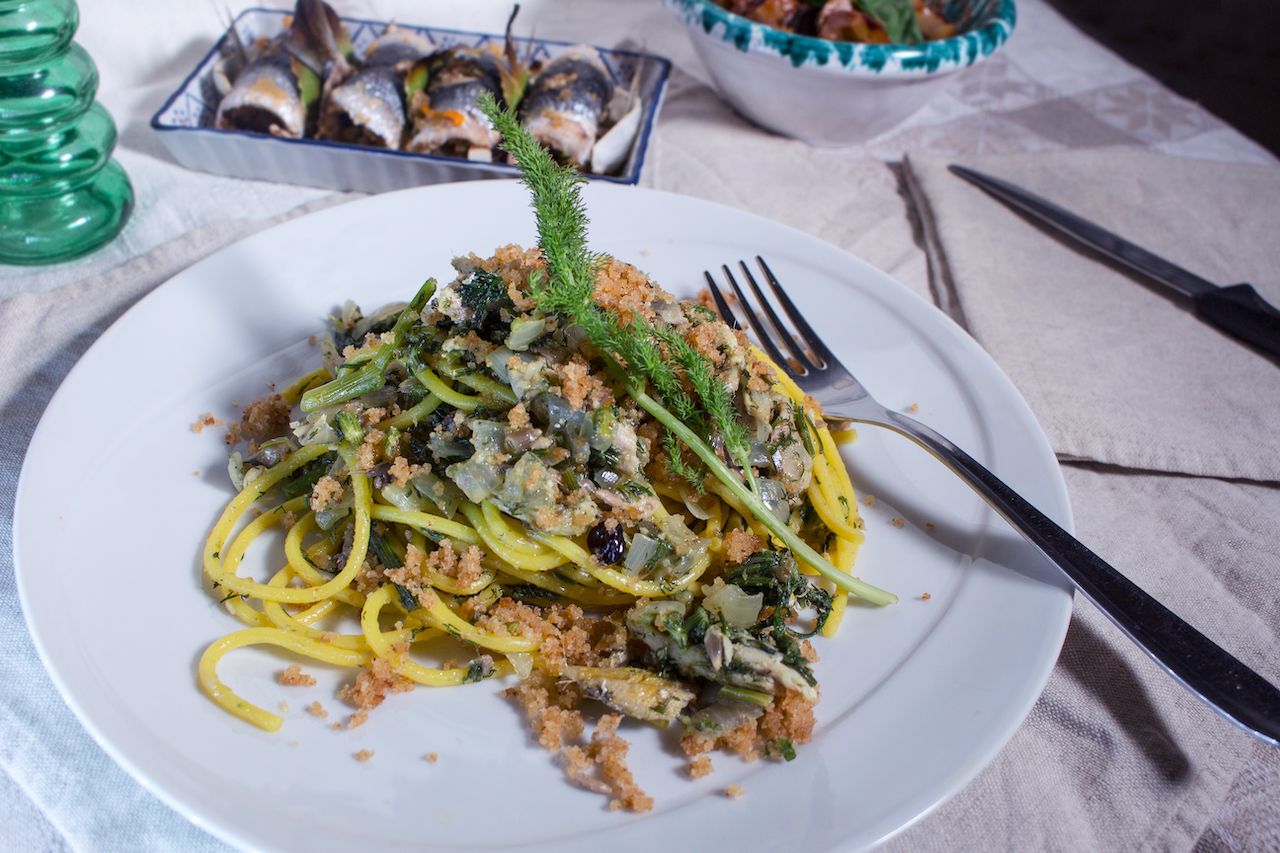 No discussion of Italian cuisine would be complete without pasta. Nearly every meal in Sicily starts with a primo piatto of pasta. There are loads of types of pasta served, but some of the more common regional styles include:

Pasta alla palermitana: “Palermo style” pasta is a must-have when in the northwestern city of Palermo. Fish-lovers will salivate over this spaghetti served with freshly caught and breaded sardines, saffron, a hint of fennel, onions, and a dash of pine nuts.

Pasta ‘ncasciata alla messinese: From the northeastern city of Messina, this is an oven-baked macaroni dish. Tomato sauce is blended with mozzarella and provolone cheese then peppered with peas, cubes of fried eggplant, and chunks of prosciutto or salami.

Spaghetti alla siracusana: Last but not least, pasta in the southeastern city of Siracusa is made by frying vermicelli pasta in a pan with breadcrumbs before mixing in anchovies, onions, capers, diced tomato, and raisins. Possibly the oldest meal on this list, spaghetti alla siracusana has been popular since Siracusa was ruled by the Greek tyrant Dionysius in the fifth century BCE. 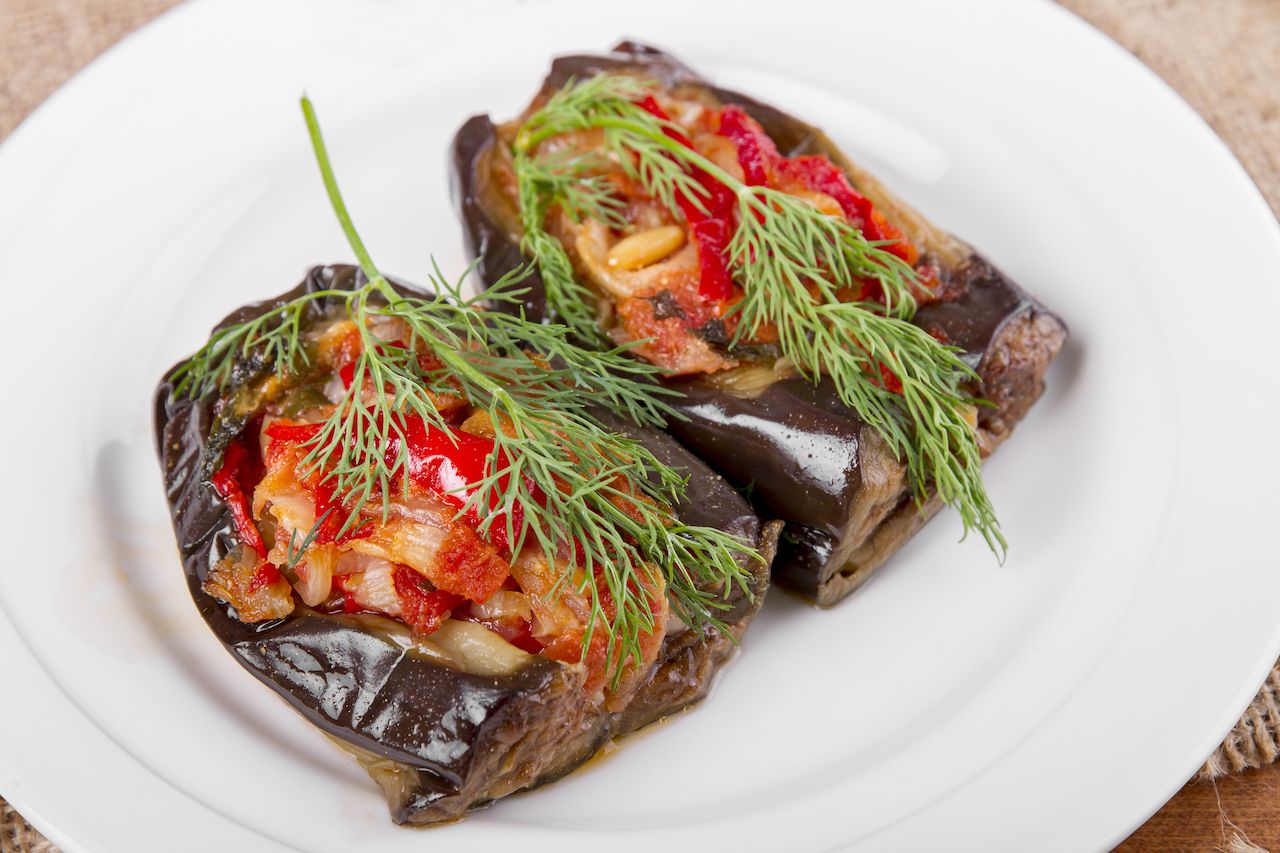 Known as mulincianeddi chini in the Sicilian dialect, or melanzane ripiene in traditional Italian, this stuffed and baked eggplant dish usually prepared fresh. When ordering this dish, consider asking for an antipasto because it’s going to be a wait. The filling is a mix of egg yolk, parmesan, ricotta, and oregano. Because of its time-intensive preparation, stuffed eggplant is found primarily in rustic restaurants that take pride in slow food. Slow food is an Italian concept that became an international food movement which recognizes that cooking is an art that takes time and requires the utmost respect for the ingredients and the environment that they are grown in. 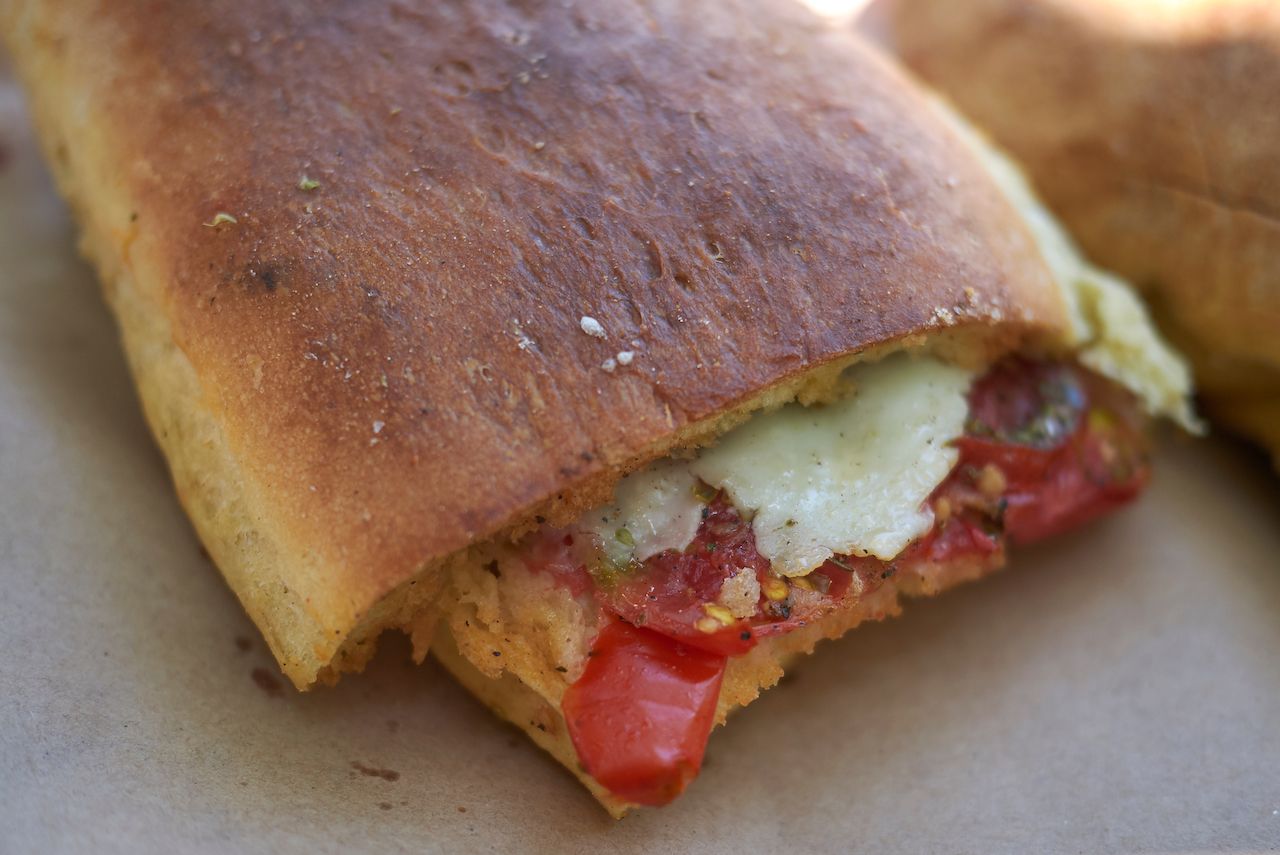 A simple, yet filling, meal, pane cunzatu is a loaf of fresh-baked bread ripped open and seasoned with olive oil, pepper, and cheese. Pane cunzatu is often topped with olives and sun-dried tomatoes, as it was historically made by Italian peasants from leftover cooking ingredients. The seaside version of pane cunzatu tops off the oil, pepper, and cheese with acciughe salate (salted anchovies). Often sold as a takeaway dish or a rustic restaurant meal, pane cunzatu is a carb-a-holic’s dream. Eating an entire loaf of bread by oneself can be a terrifying feat, but leaving food on the plate is sinful in Italy. We recommend splitting this dish among friends. 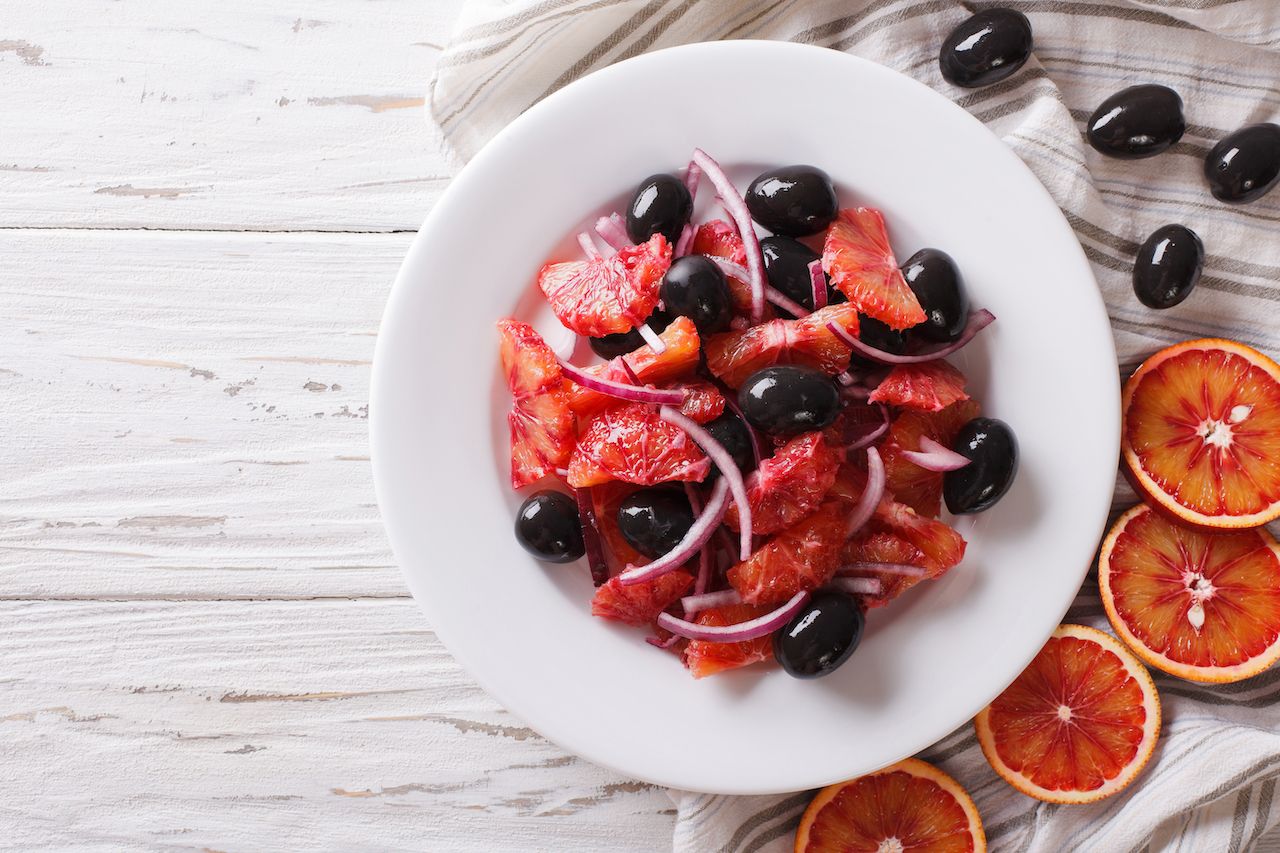 Almost every ingredient in insalata siciliana (Sicilian salad) can be found in nonna’s backyard. The salad is a sweet and savory combination of black olives, Sicilian blood orange wedges, thinly sliced fennel, anchovies, and red onion that’s all lightly tossed in olive oil and orange juice. Although traditionally popular as an antipasto or side dish in the winter, insalata Siciliana is best consumed when the oranges are picked fresh (anytime from November to June). The blood orange has a sweet-but-tangy flavor, accompanied by high levels of Vitamin C. 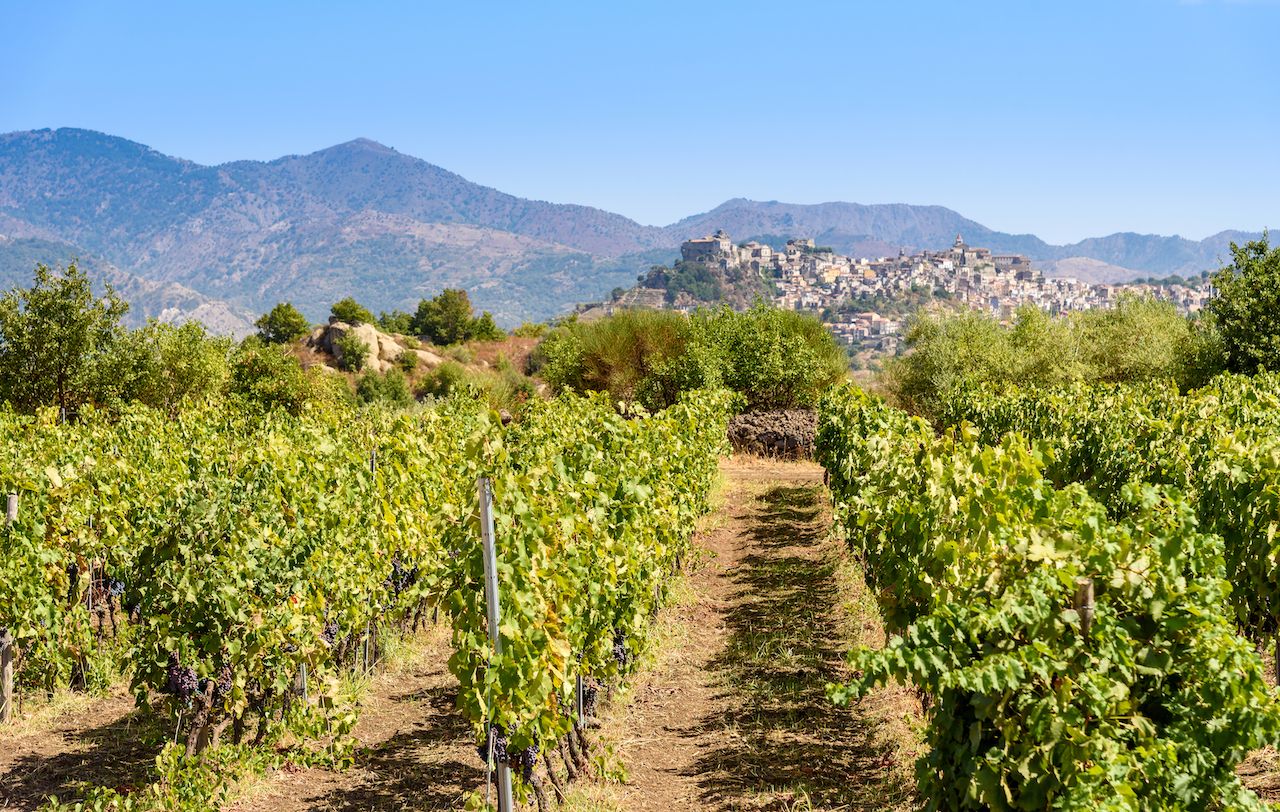 Sicilian wine varies from region to region. For instance, the city of Marsala (famous for wine-soaked dishes, such as chicken marsala and veal marsala) in western Sicily, has a windy coastal climate that makes its wines light and airy. Marsala typically refers to a wine fortified with brandy while dry Marsala wine is used for cooking. Sweet, amber-colored Marsala is the perfect post-dinner digestivo. The most planted wine grape is catterato, which is grown both on the eastern coast and near Mount Etna. Wines made with catterato have notes of lemon and orange that make it the perfect pairing for Sicily’s many seafood dishes.

Grapes grown in Sicily absorb rich minerals from the mountainous soil. The most famous is nero d’avola, a dry and fruity red wine with high acidity that’s mostly grown in the southwestern region of Siracusa. Nero d’avola has hints of plum and blackberry and is best paired with meaty dishes like lamb or an aperitivo platter of salami made from Sicilian black pigs. Another southeastern Sicilian red is frappato, which is less acidic and lighter than nero d’avola but similarly fruity. Rather than choosing one, book a wine tour while in Sicily and try them all. 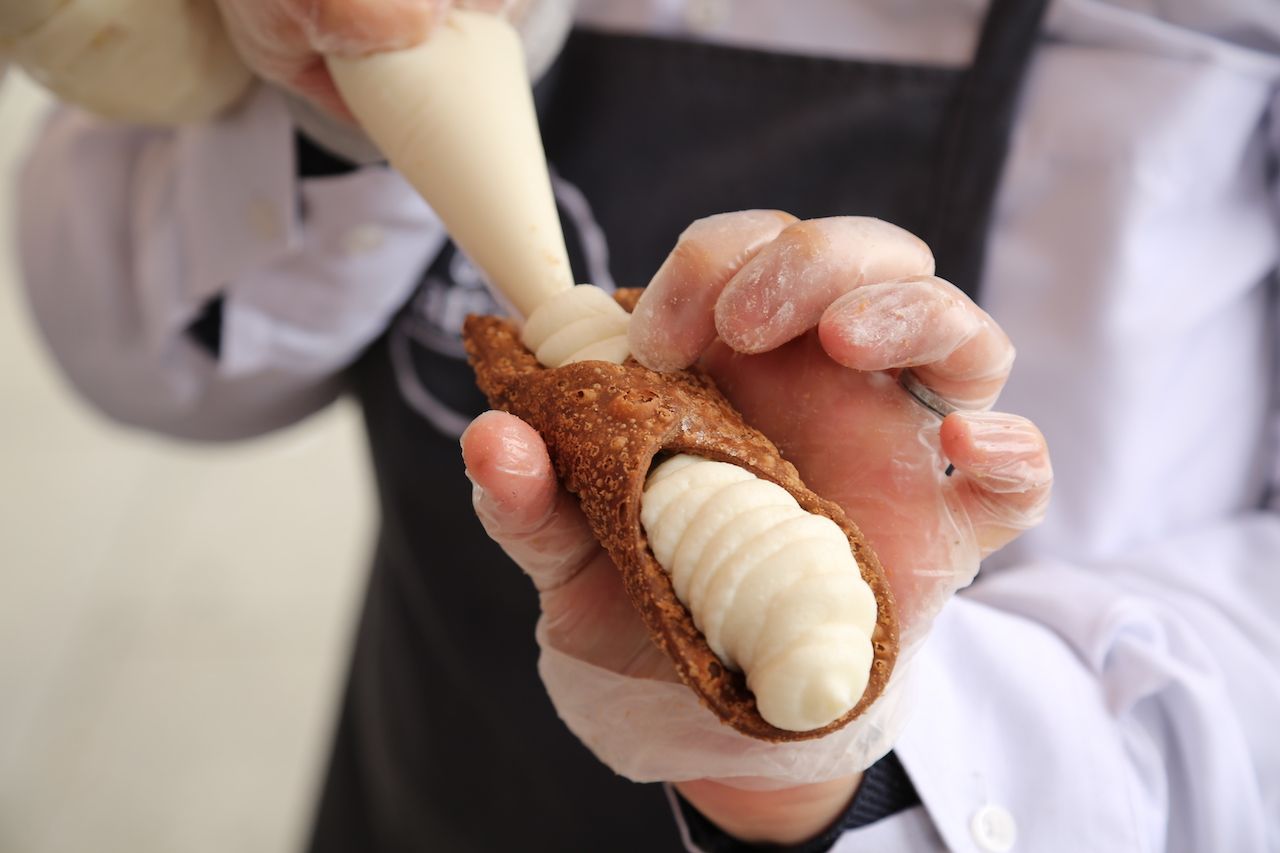 Cannoli is perhaps the most popular and well-known Italian dessert. For a traditionally made cannoli, there is one golden rule: Never ever buy one that has already been filled. A fresh cannoli shell should be crisp, not moist, and filled in front of your eyes with the cream of your choice. The filling should be made with sweet ricotta, although some shops use white cream instead for a modern twist. Plain ricotta is a classic, but pistachio is another traditional variation. Chocolate and Nutella lovers will find no shortage of options while a truly postmodern cannoli lover might order cannolo scomposto, which is a broken cannoli shell served over a dish of ricotta or cream with chocolate sauce and (optionally) chopped hazelnuts. Buon appetito.

CultureCatania in Sicily Is a Blend of Three Distinct Cultures, and It’s Beautiful
Tagged
Dessert Food + Drink Insider Guides Sicily, Italy
What did you think of this story?
Meh
Good
Awesome