Set on Washington state’s massive Olympic Peninsula, Olympic National Park sprawls across more than a million acres, 95 percent of which has been designated as pristine wilderness. It has towering peaks, four different rainforests, over 3,000 miles of rivers and streams, and 73 miles of wilderness coast. With so much awe-inspiring territory, choosing from its 611 trails is a daunting task. Rest easy. These five off-the-beaten-path trails will help you beat the crowds and savor all that the Olympic National Park has to offer. 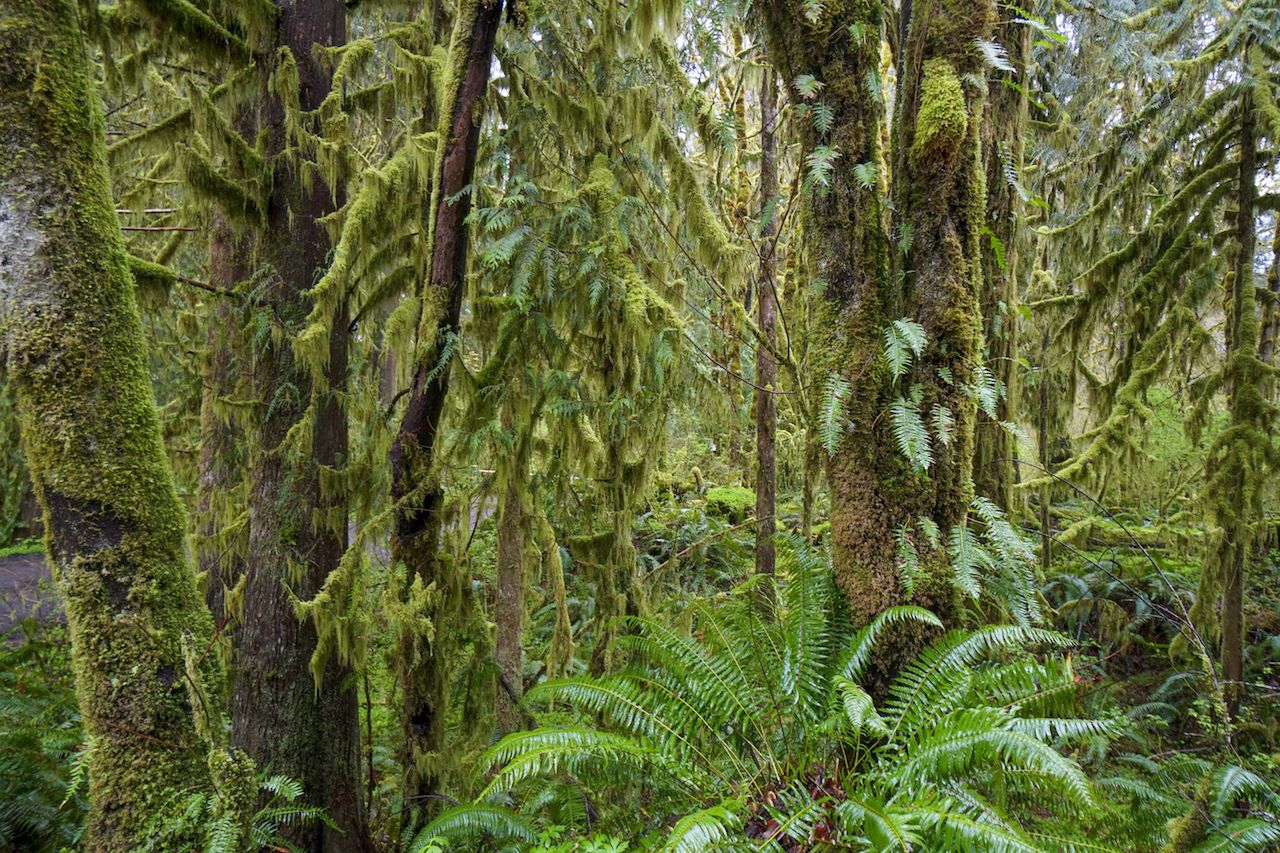 The Bogachiel River Trail, also known as the Bogachiel Rainforest Trail, is a less used but equally majestic alternative to the popular Hoh Rain Forest Trail further south. The trailhead is accessible from the west side of the park off of Undi Road and starts out on national forest lands.

Two shorter loop trails sit outside the national park boundary, so they can be enjoyed on casual day hikes with your four-legged friends. The first of these shorter loops is the Homestead Loop Trail, a one-mile loop that takes you through the 1890 Morgenroth homestead. The second is the Ira Spring Wetland Trail, a three-mile loop through a mossy-laden forest overlooking an active wetlands biome.

Once inside the Olympic National Park boundary, the Bogachiel River Trail will take you all the way into the Seven Lakes Basin. It’s an easy hike through old-growth rainforest and dense undergrowth until the trail splits off from the main Bogachiel River and follows the North Fork Bogachiel as it climbs up to the basin.

Should you go all the way to Bogachiel Peak, the entire trek is about 30 miles. It also happens to be part of the greater Pacific Northwest Trail, a 1,200-mile trail that starts in Glacier National Park, Montana, and ends at Cape Alava, Washington. 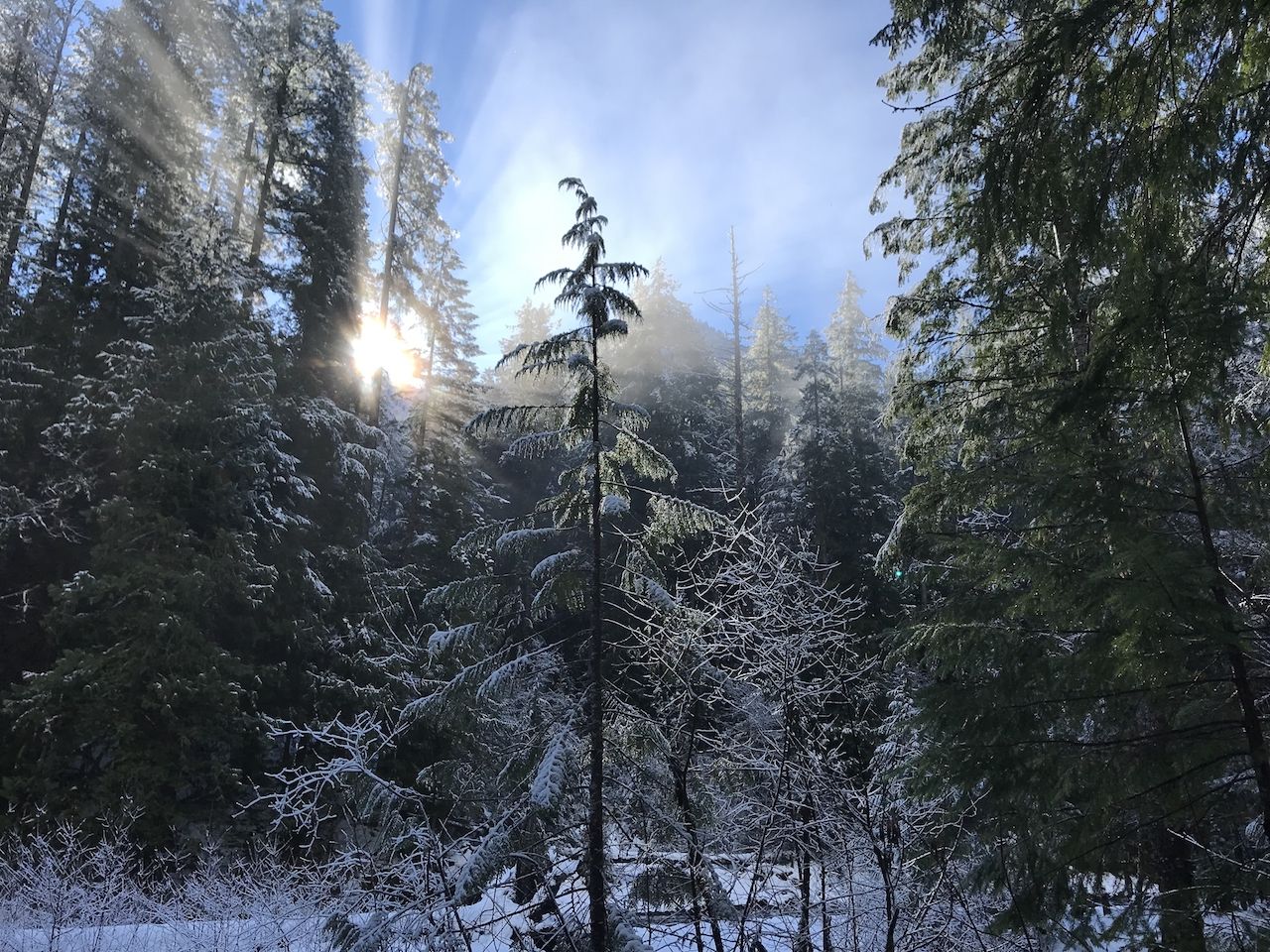 Elkhorn and Dosewallips Campgrounds used to be accessible by car, but a massive washout in 2002 gave them both back to Mother Nature. Now you can hike the one-and-a-half miles to Elkhorn Campground through a tunnel of trees along a wide, abandoned road.

Although a makeshift trail cuts across the washout, the recommended bypass switchbacks up and over the washout. From the top, you’ll get a panoramic view of the river. The old Dosewallips Road begins to climb past Elkhorn Campground as it makes its way the four miles to Dosewallips Campground. The Dosewallips Falls are an impressive sight and a favorite picture spot for hikers.

The road levels out at the top of the falls and then drops down into the campground. Old speed-limit signs stand among reaching tree branches like some kind of an inside joke reminding you that you could once drive through here. Picnic tables sit next to iron fire rings, heedless of the creeping growth of nature as it reclaims its own.

For some, it’s an eerie feeling, like a ghost town among the towering pines and firs. For others, it’s a tranquil place of luxury camping for backpackers. Either way, it’s worth the visit. 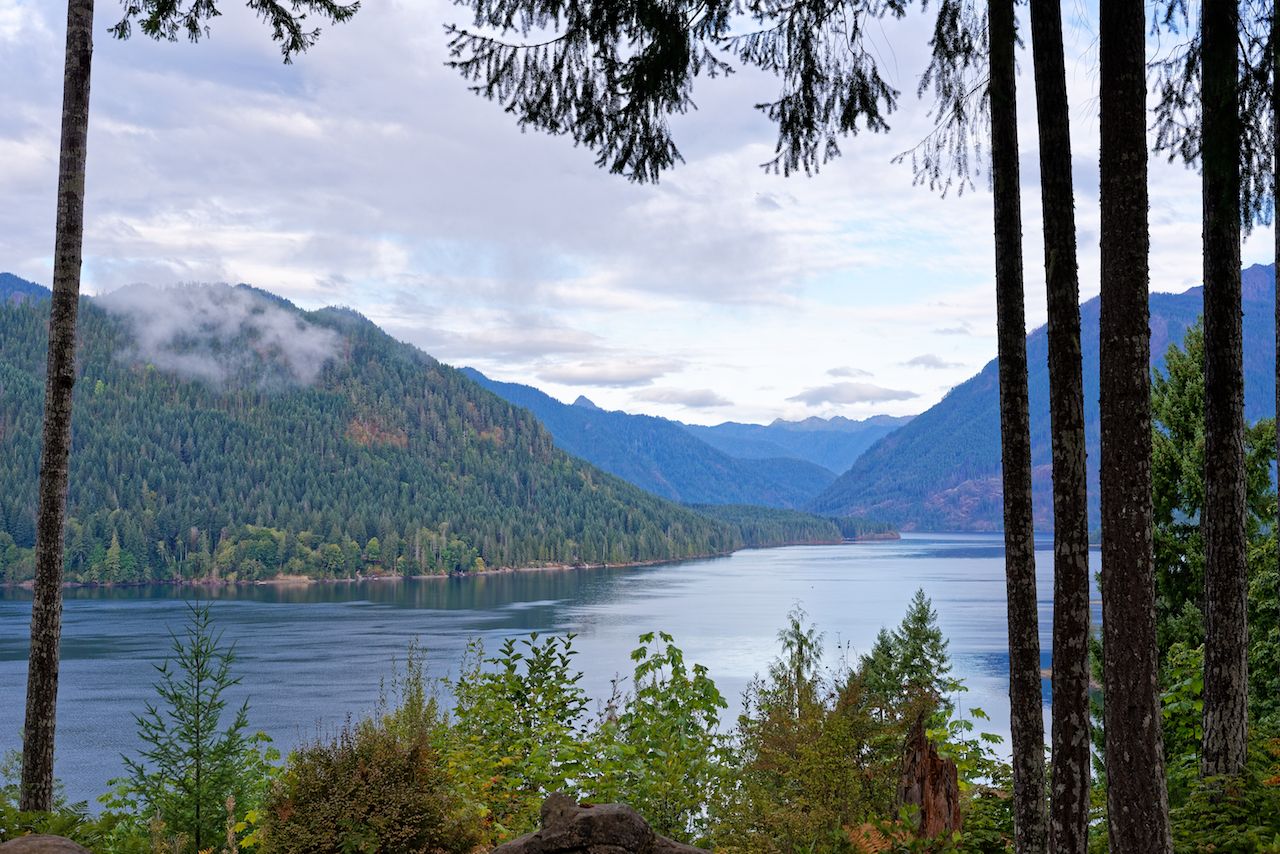 The North Fork Skokomish River Trail sets off from the Staircase campground at the north end of Lake Cushman, a short distance from the Hood Canal in the southeast corner of Olympic National Park. A ranger station and campground are part of the lower Staircase Loop, a pleasant place to spend the weekend. Be sure to check out the giant cedar while you’re there.

Passing a picturesque little pond as it crests First Divide, the trail plunges down into the Duckabush River drainage. You can make camp on the open mountainside at Home Sweet Home then climb back up and over First Divide to head back down to Staircase, or you can follow the Duckabush River Trail out to the east side of the park. 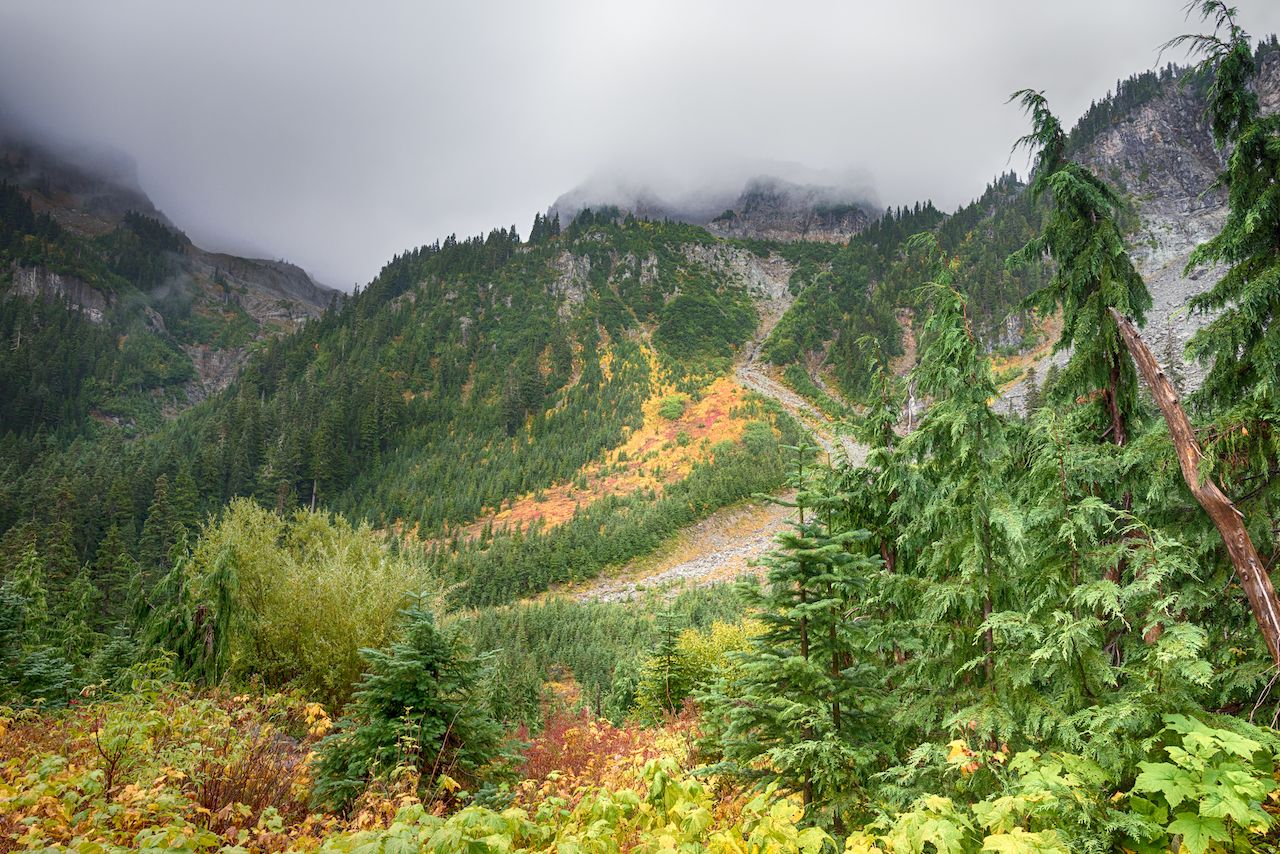 Enchanted Valley, also known as the Valley of 10,000 Waterfalls, has been a popular destination for visitors since the early 1930s. Back then, $2.50 would buy you a meal and a bed at the Enchanted Valley Chalet, built and operated by the Olympic Recreation Company. Although closed to the public today, the Chalet still stands amidst all the waterfalls, which cascade down Chimney Peak and pour in from Anderson Glacier.

The glacier is 13 miles upriver from the Graves Creek Campground on the south side of Olympic National Park. Don’t be daunted by the 13 miles. The trail follows the Quinault River over charming log bridges through the rainforest and old-growth trees with mild elevation changes. Moss covered trees and proliferation of wild berries in the summer make this a favorite trail for contemplative hikers seeking a meditative journey.

With campsites every three to four miles, this is also a good trail for the family to enjoy together. More ambitious hikers can summit Anderson Pass and follow the Dosewallips River back out to Highway 101 on the east side of the park. 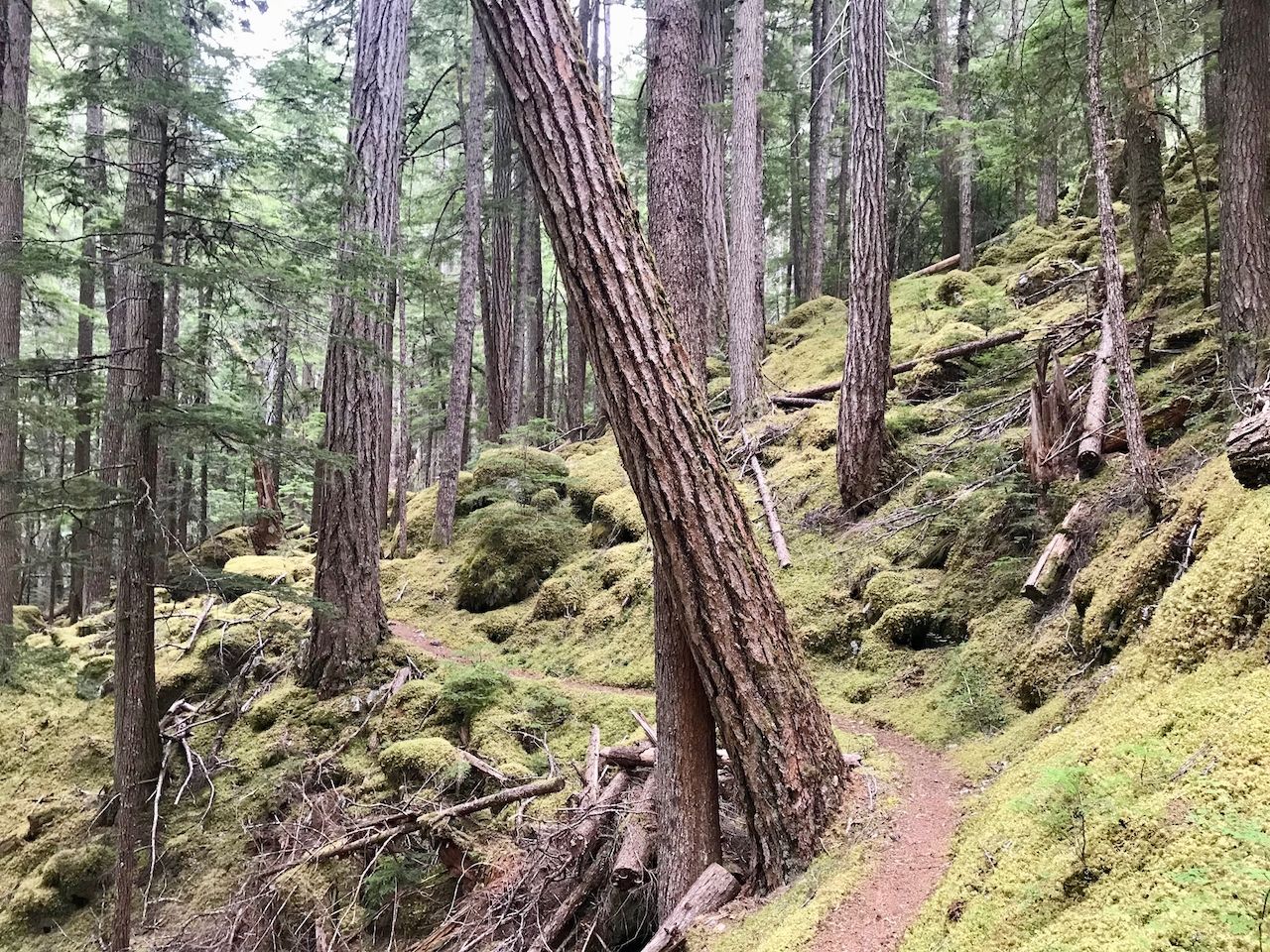 The Gray Wolf trail is not for the faint of heart, but it will definitely reward the determined. Located on the northeast side of the Olympic National Park near Sequim, Gray Wolf lacks the dense vegetation of the westside rainforests, but it more than makes up for it with steep mountain walls and fiercely cold rivers.

The climb up to Falls Camp is a whole different side of the Gray Wolf Trail. The old trees space out, and sound gets gently muffled by the moss-covered forest floor. The whole scene could be taken right out of a King Arthur story. You’ll pass through a sage field and look up to see a waterfall cascading towards you. Then look down to see Gray Wolf River crashing over the rocks. Set up at Falls Camp, then make the day trip up to Cedar Lake to complete your journey.

Hiking5 Extraordinary Hiking Trails You Won’t Believe Are in the United States
Tagged
Hiking National Parks Washington, United States
What did you think of this story?
Meh
Good
Awesome