Uganda might be famed as the last frontier of mountain gorillas, along with neighboring Rwanda and Democratic Republic of Congo, but what you might not know about this country is that it is also home to a complex cuisine. When it comes to breakfast, lunch, and dinner, bananas reign supreme. Whether you’re hankering for a roadside snack on the bustling streets of Kampala or enjoying dinner at a high-end restaurant overlooking the skyline, or even sharing a meal at a local household, you’re sure to find bananas on the menu. Uganda is known to grow more than 50 varieties of bananas and has perfected its culinary craft to draw different tastes from this assortment. Here are nine Ugandan dishes (and drinks) that incorporate bananas. 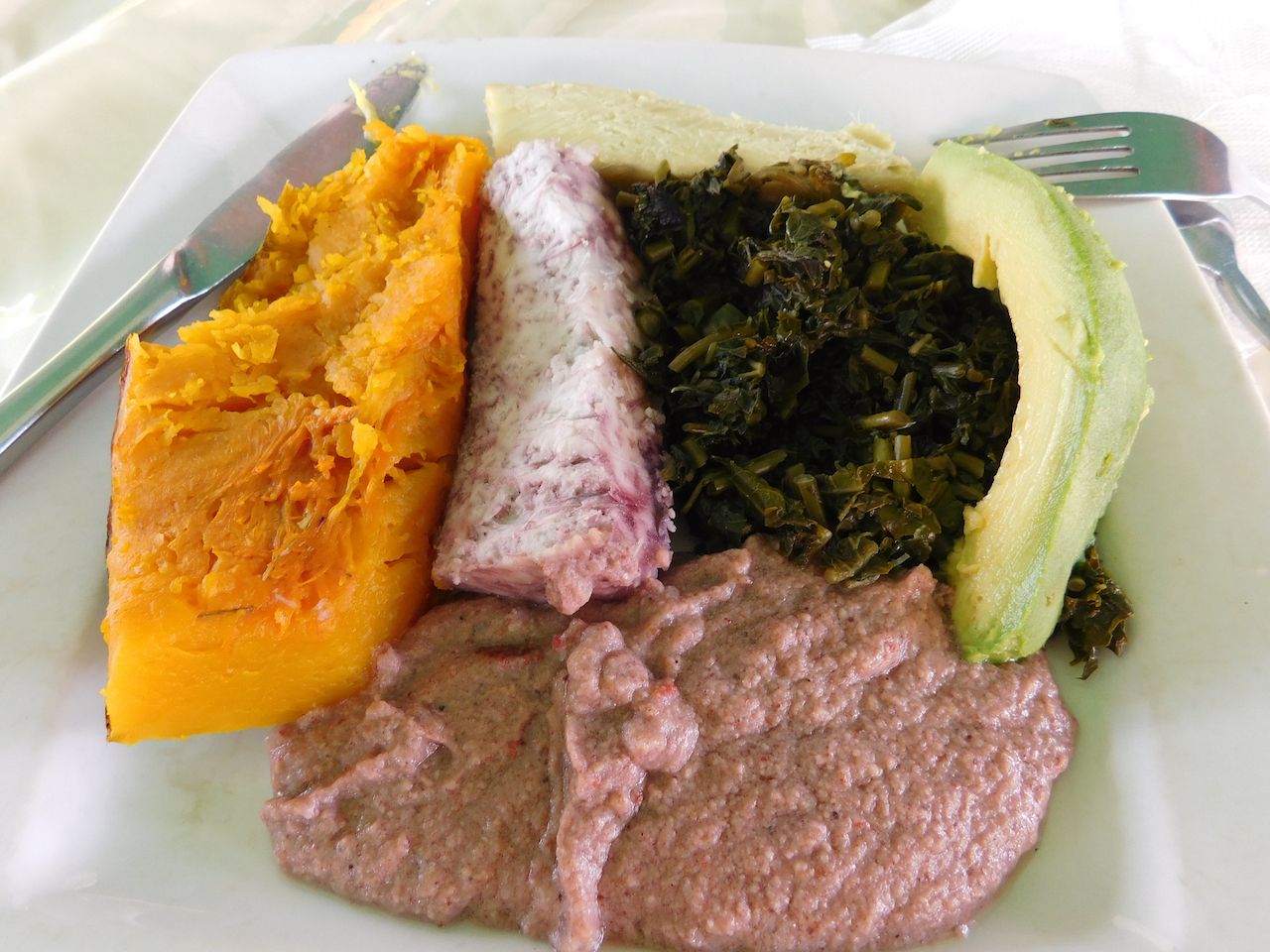 Matooke is a ubiquitous dish in Uganda. Green bananas are peeled and wrapped in banana leaves like a gift. The wrapped bananas are then placed in a pot lined with banana stems and filled with a small amount of water. Finally, the pot is covered with banana leaves. The bananas are steamed for at least an hour. Still wrapped, the bananas are mashed by gently pressing them with open hands. The mashed bananas are returned to the same pot to steam for another 40-50 minutes to accentuate their flavor. This cooking process is called okubobeeza etooke. The steamed bananas are served with either bean stew or oluwombo (a stew of chicken, goat meat, or beef) with a side of ebinyeebwa (peanut sauce). 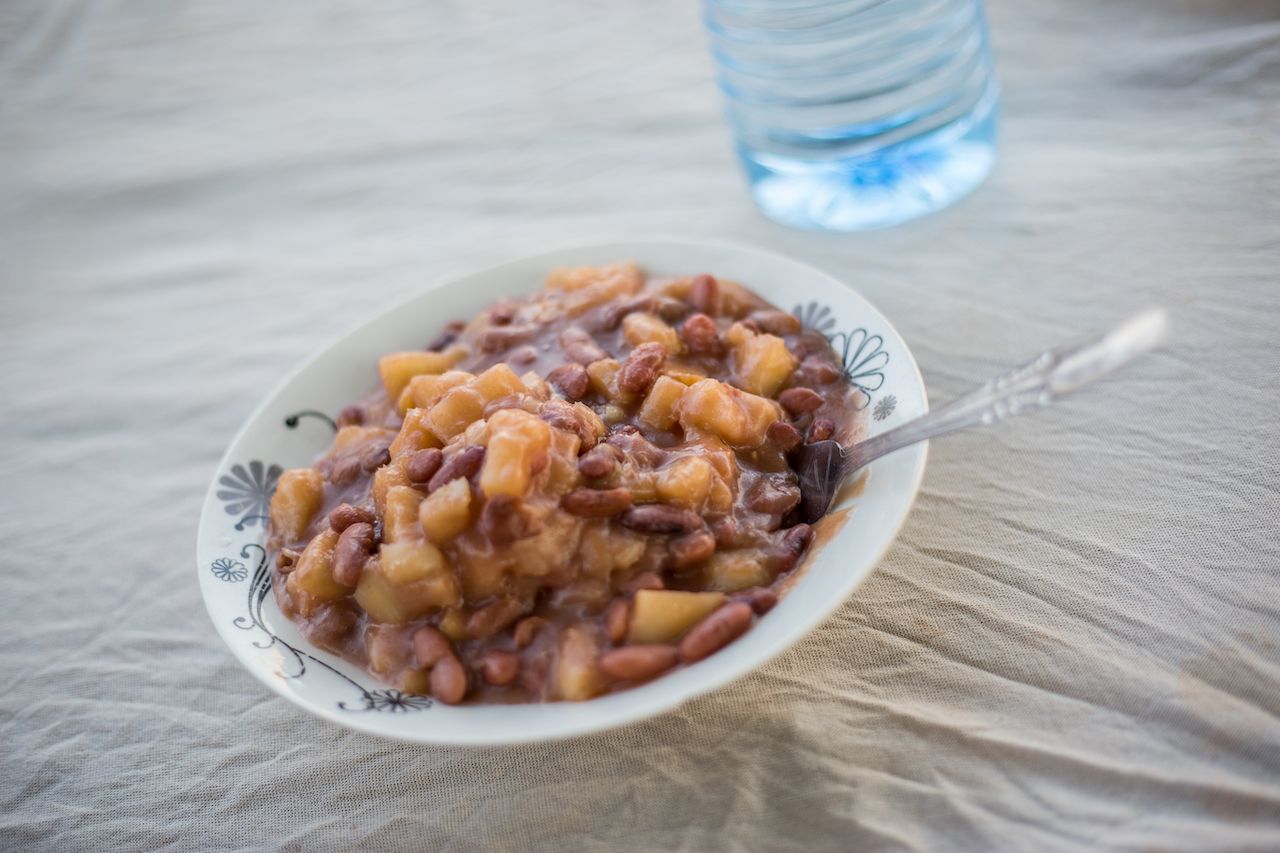 Katogo is a stew, typically served as breakfast. Onions, tomatoes, pepper, eggplants, courgettes, and green pepper are combined in a pan until a thick sauce forms. Leafy green vegetables or beans are added to the mixture, followed by peeled green bananas and water. The stew is cooked until the bananas become tender and turn yellow. 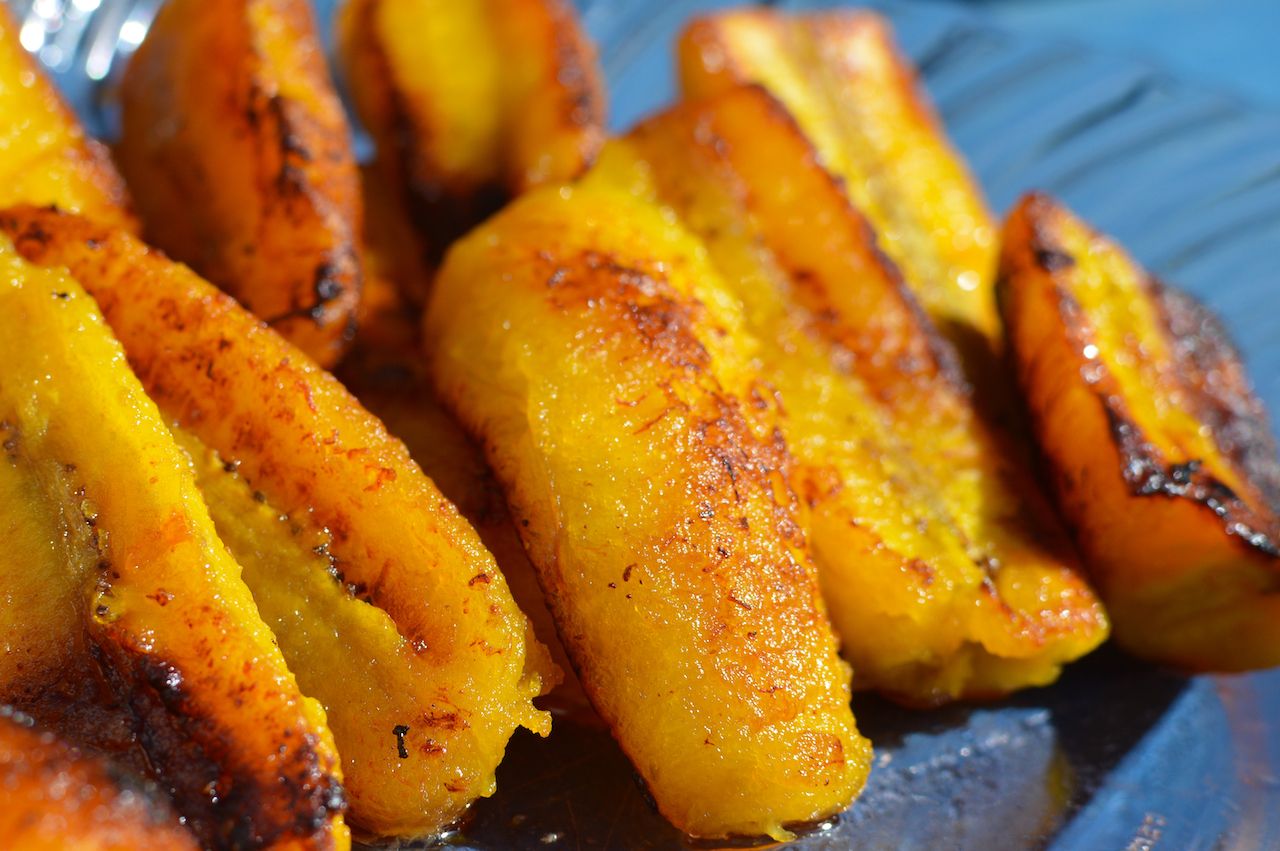 This simple yet flavorful dish is made with ripe plantains called gonja that are either roasted, deep-fried, boiled, or baked. Similar to matooke, it is served with either a stew of beans or oluwombo and ebinyeebwa to balance its sweet taste. Another breakfast item not to miss.

Although in Uganda they are known as pancakes, these popular breakfast pastries are akin to doughnuts. Ripe dessert bananas, small in size and locally known as ndiizi, are mashed in a bowl and mixed with cassava flour to form a non-sticky dough. It is rolled to form a flat circular shape with a thickness of approximately two inches. A cookie-cutter is used to cut out circular shapes, which are deep-fried for three to five minutes or until golden brown. They are served hot. Since cassava has a very mild taste, the sweet bananas lend their distinctive natural sweetness. 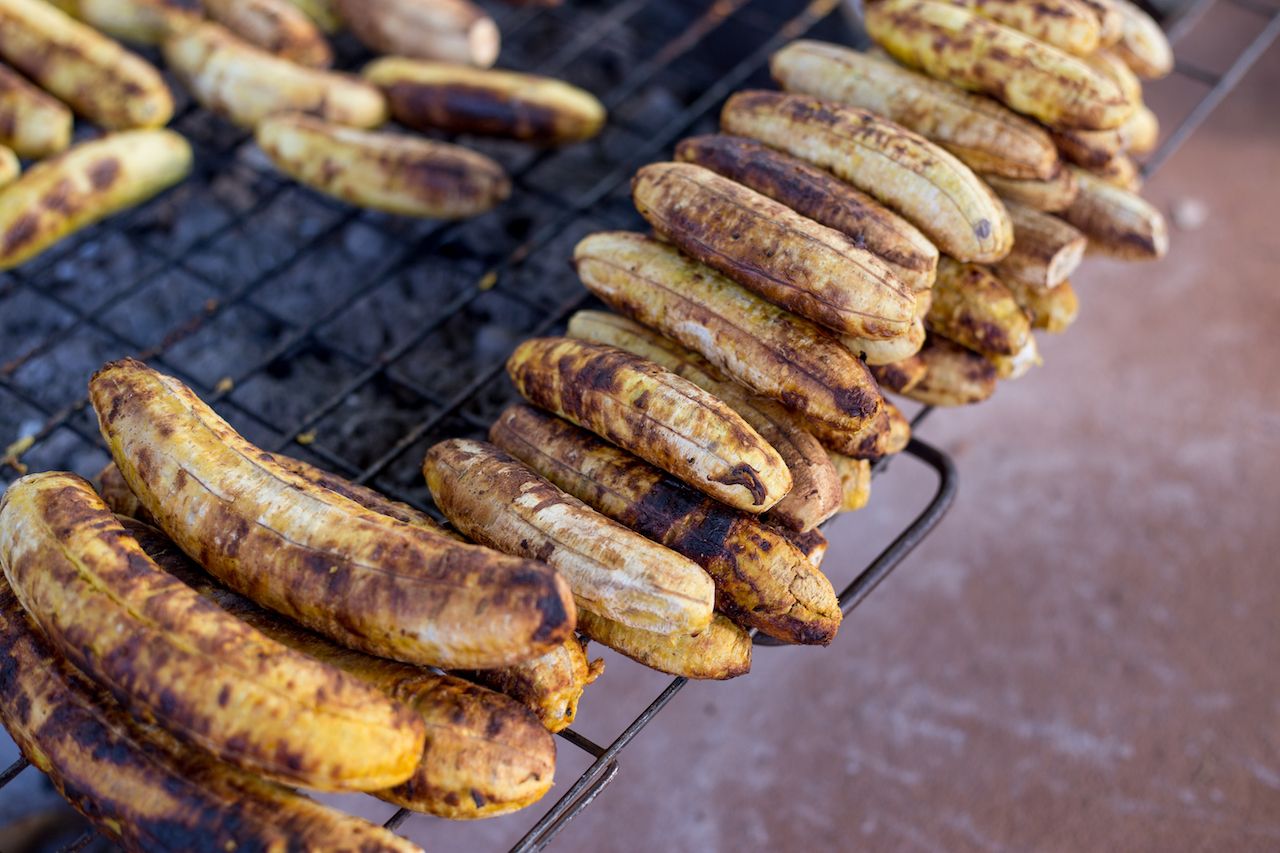 Everywhere you step in Kampala, the capital of Uganda, there are roadside vendors selling a huge stack of roast bananas as a simple snack. Green bananas are roasted or barbecued over hot coals until they become tender. This delicacy is best enjoyed hot at any time of the day.

Banana cake can be served for breakfast, at tea time, or as a dessert. In Uganda, banana cake tastes and looks just like any banana bread that you’ll find in the West: not too sweet, light, fluffy, and suitable as a daytime snack or an after-dinner treat. 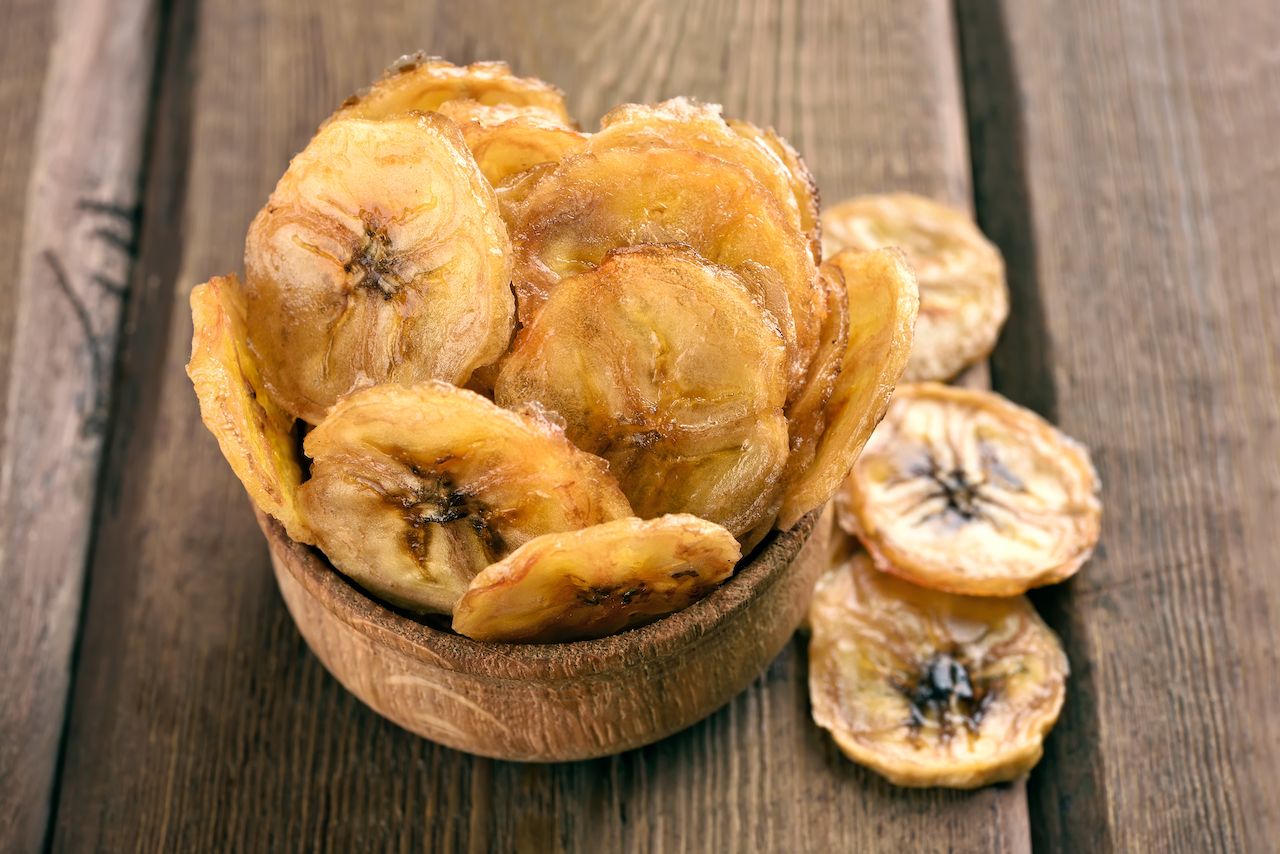 Banana chips in Uganda are similar to those you’ll find in many other countries that enjoy snacking on bananas, like India and Indonesia. In Uganda, chips are mostly made of deep-fried plantains. Thin slices of ripe or unripe bananas are cut either across to form small circular pieces or along to make long pieces. They are deep-fried until they are golden brown (if ripe) or gold-yellow (if unripe). They are served cold on a platter. 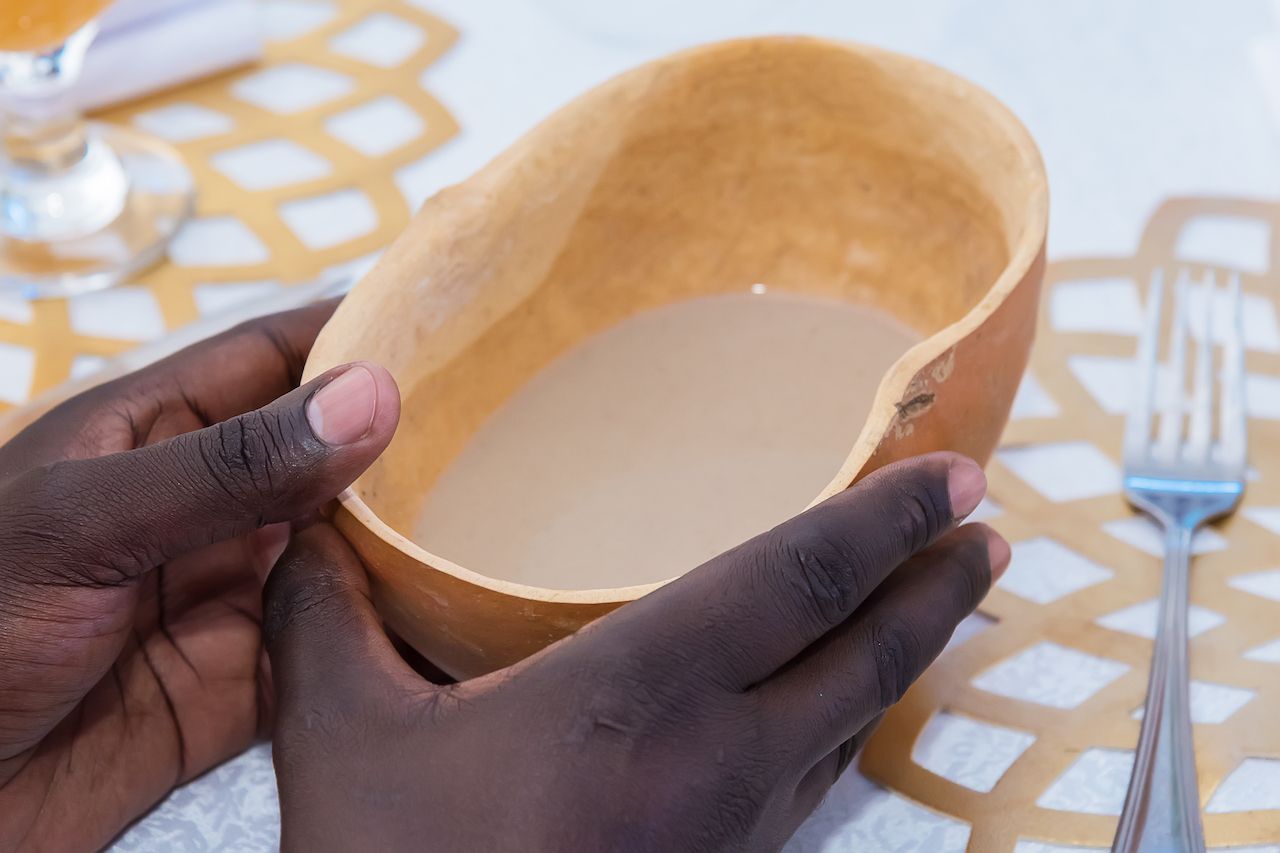 Tonto is banana beer, a local brew made from bananas, particularly the kanyinja variety predominant in Central Uganda. A bunch of mature bananas are cut and stored for about seven to eight days to ripen. The ripe bananas are placed in a wooden trough and pressed with bare feet to extract juice: a process very similar to wine-making. In this case, elephant grass is used to facilitate the sieving process. The juice extract is poured back into the wooden trough, and millet is added as a fermentation agent. The mixture is then covered with banana leaves and left to ferment for two days. The alcohol is preserved in a gourd, which also serves as a decanter. Tonto plays a significant role in Ugandan culture: During a traditional marriage ceremony, for instance, the groom must present three gourds of this beer.

In the Western world, it might not be intuitive to juice a banana, but in Uganda, the practice is common. The procedure of extracting banana juice is similar to the beer-making processes — and it’s usually all done by hand. Mature bananas are harvested then stored in dugout holes in the ground, which are covered with banana leaves to speed up the ripening process. The ripe bananas are then peeled and mixed with elephant grass in large bowls. The juice extract is then diluted with water and served cold.

Food + DrinkNo Celebration in Kenya Is Complete Without Fermented Porridge
Tagged
Food + Drink Vegetarian Uganda
What did you think of this story?
Meh
Good
Awesome