During uncertain times, we’ve taken comfort in customs borrowed from other cultures. The Danish concept of hygge, or embracing coziness, and Norway’s friluftsliv, time spent out of doors, are two ways to help us take care of our inner selves — so we can better face what the outside world may throw at us.

And just when it seemed we could exhale, we might be best off inhaling a deep breath of gusty air first. In the Netherlands, wind is the source of mental cleansing. When the Dutch need to get refreshed, clear the mind, and prepare for what comes next, they go uitwaaien, or “out-blowing.”

“It’s actually something very normal,” says Jalou Langeree, a three-time world champion kitesurfer from the Netherlands. “Like if you will be sitting the whole day at home and you’re like, ‘Oh, I’m going to go outside and uitwaaien, just to get a fresh mind.’”

For Langeree, who excels in many water sports and is also an avid cyclist, uitwaaien is best achieved in nature. She recognizes, though, that not everyone has that option.

“For people in town, it’s probably nice if they have a little walk in the park; that for them is uitwaaien… getting out of your house and catching some fresh air,” says Langeree. “But in my eyes, I advise going to the beach, being in the forest, really catching a breath and being away from buildings. That for me is uitwaaien.” 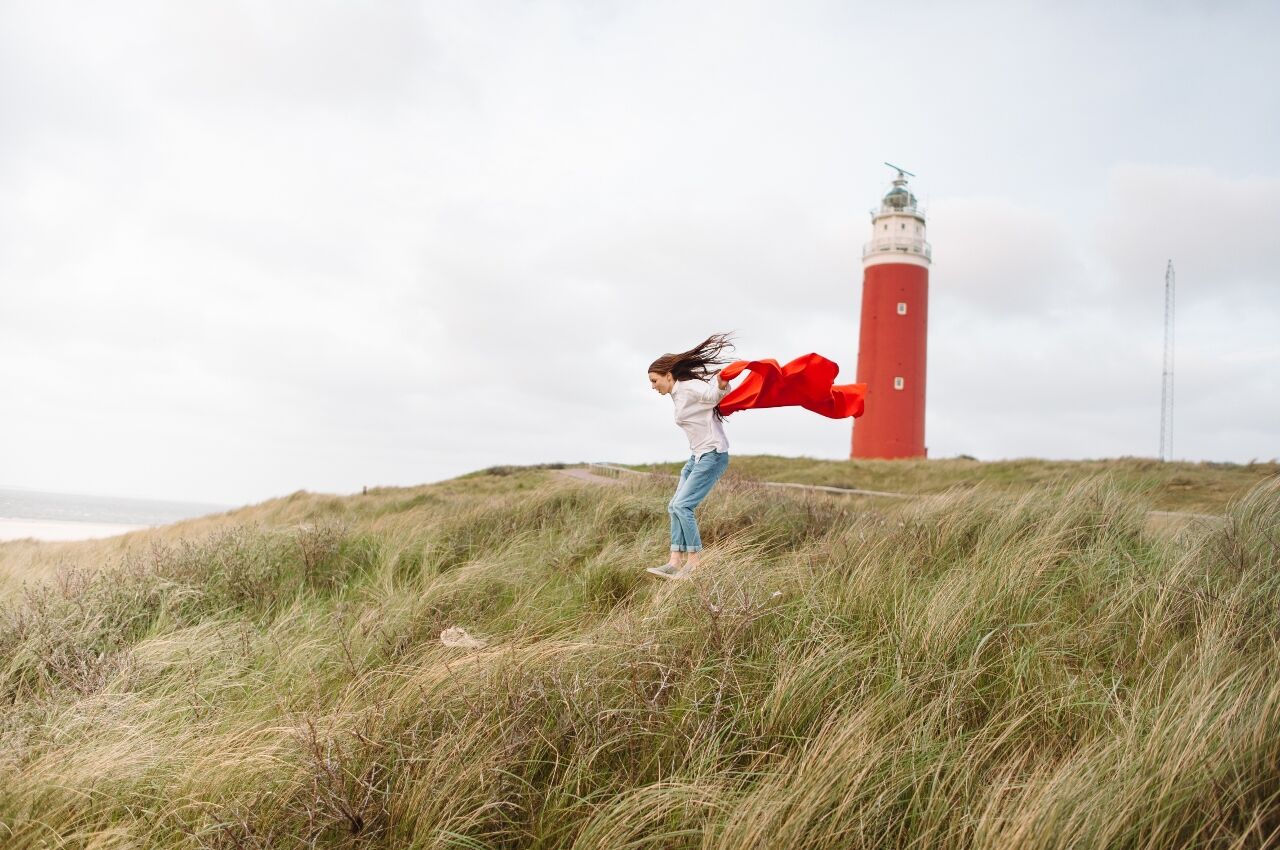 The term was first recorded five hundred years ago, but back then its meaning was more limited, says Caitlin Meyer, Assistant Professor of Dutch Linguistics at the University of Amsterdam. It could evoke a “flag flapping in the wind” or “blowing out a candle,” she says in a Zoom conversation from her home on the blustery Dutch coast.

In the 1800s, the meaning of uitwaaien extended to freshening up your clothes on a drying line in the wind. By the end of the century, the term was used to mean freshening up people as well, says Meyer.

“Typically that would involve angry people, like ‘Do you need to cool down in the wind?,” a concept that Meyer notes can be intuitive. (Think of storming out of the house to get a breath of fresh air). In time, uitwaaien became less of an activity for dealing solely with negative moments and instead was seen as a good thing to do any time.

“It sort of became a more general verb in the early 20th century,” says Meyer. Since then, the Dutch have been seeking out wind for its favorable effects. And it can be a frequent activity, since most Dutch people are outdoorsy, own hiking boots, and ride their bikes everywhere, says Meyer.

It’s so central to the Dutch way of life that Meyer says her students can’t understand the fuss among foreigners about the term, as if it is something special. “My students were like, “This is just life.’”

Similarly, Denmark’s hygge is just a way of life, in that it can help Danes cope with their long winters. Likewise, Sweden’s fika, or the meeting with friends for coffee and cake, can brighten a cold, dark afternoon.

Add to that list friluftsliv, the Norwegian dedication to being outside, which is more like uitwaaien in that it’s an embrace of the outdoors, rather than retreating from it. Yet another Nordic term, sisu, the Finnish well of inner strength, is less of an activity and more of an attitude — yet it’s still a way to cope with harsh winters and any other challenge that comes your way.

All of these habits and habits of mind can be good for our long term health, as can uitwaaien. But uitwaaien is also seen as bringing immediate short term benefits.

“You have a fresh mind,” says Langeree of the sensation you get from uitwaaien. “You’re more happy. And you’re clear in your head.”

As such, uitwaaien may be more like shinrin yoku, the Japanese pursuit of “forest bathing,” or spending time in the forest for its documented boons to psychic and physical health. That said, uitwaaien is not necessarily a meditative walk in the woods.

“It’s a purposeful kind of activity,” says Meyer, who says uitwaaien should leave you with a clear mind, feeling refreshed. “It’s not necessarily spiritual. It’s very pragmatic and down to earth. But it is supposed to be a relaxing activity.”

As the flattest country in Europe, exposed to the North Atlantic’s occasionally gale force flows, the Netherlands has wind to spare. Everyone owns a thick coat, says Meyer, and dogs are used to taking walks with their fur blowing everywhere. But you don’t need a cyclone to achieve uitwaaien.

“It doesn’t necessarily have to be like 50 knots before you can go uiwaaien,” says the kitesurfer Langeree. The important thing is to get outside and get the fresh air. She notes, though, that in her country, “We always have a little breeze.”

The 7 Destinations Out of Cell Range where You Can Totally Unplug
Tagged
Lifestyle Wellness
What did you think of this story?
Meh
Good
Awesome