The area around Orlando, Florida, is known for thrill rides, Mickey Mouse ears, and crowds of tourists. What it’s not known for is the underwater light show that happens every year here from June to October. It’s during this time that the Merritt Island National Wildlife Refuge — 140,000 acres of water, islands, and marshlands off the east coast of Central Florida — puts on an exhilarating show of a whole different caliber.

The wild phenomenon, which you can reach within 45 minutes from the major theme parks, happens nightly and is a sight to see. Just ask Elsa Turull de Alma, a Dominican Republic resident who visits central Florida often; she says it’s like paddling through the Milky Way.

She began the trip in earnest with her two sons, all on high alert for deer, raccoons, and hogs that tend to frequent the area. It was a warm night in June during a new moon, the perfect time to go. They arrived at the launch point around 10:00 PM, through a dirt-road entrance alongside the Indian River.

Here they met up with Get Up And Go Kayaking, an adventure outfitter that takes guests through the estuary in a see-through kayak, so it’s easy to see marine life right below you.

“Be prepared once you lose your phone signal to lower your speed and start enjoying the journey,” she says.

Before long they were in kayaks and paddling out. Turull de Alma says it didn’t take long to witness the bioluminescence. It happens night after night, not too far offshore, when the water is warm. During the one-and-a-half-hour tour, they spotted jellyfish, dolphins, manatees and fish, all glowing neon blue.

“It’s a magical, immersive experience that nature gives us as a gift,” she says.

What exactly causes this phenomenon? It’s all thanks to dinoflagellates, single-celled organisms, that bloom here annually.

“Bioluminescence is found in all the world’s oceans, surface to bottom and coast to coast,” says Edith Widder, founder of the Ocean Research & Conservation Association. “Out in the open ocean environment, away from shore more than 50 percent of the animals you bring up in a net can make light. It’s much less common in the coastal zone where the bioluminescence you see most often is caused by sea sparkle.” (Sea sparkle is a more common name for bioluminescent plankton).

Orlando resident Stephanie Patterson has experienced it, too. She says it’s like seeing shooting stars just below the surface. During her tour she went on with her mom, she was thrilled with the peacefulness of it. Ambient noise included the occasional boat motor and the splish-splash of her paddling repetitively cutting through the water. 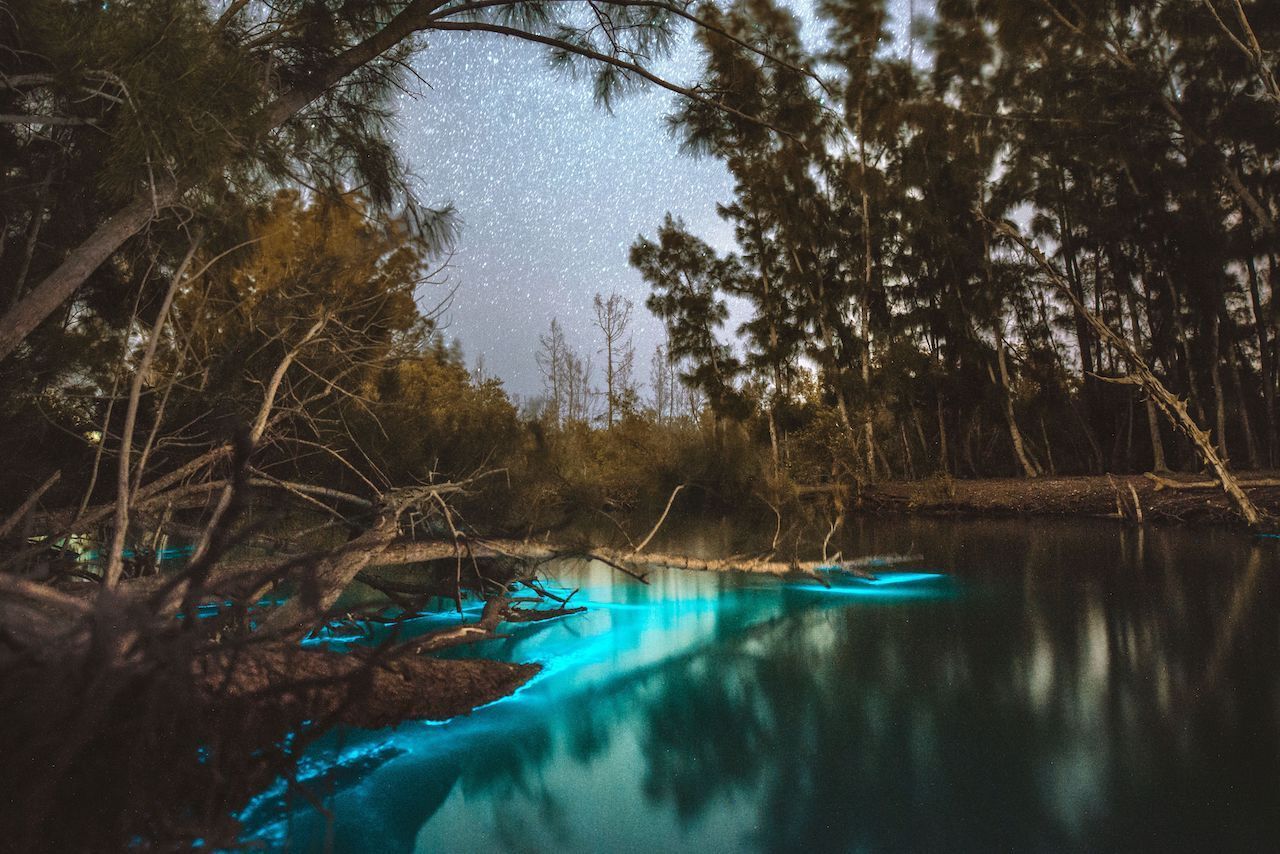 “It’s super common to see manatees,” says Justin Buzzi, owner of Get Up And Go Kayaking, who has led tours here for the past four years. “Because they glow bright blue when they pass by, people often mention that they look like submarines.”

“While they can be shy, it’s almost guaranteed you’ll be able to spot one on your tour, even if from afar,” Patterson adds.“ You’ll never forget what it felt like to kayak past a manatee lit up by a blue glow, or the freakish feeling of dipping your hand in the water and watching it glisten with bioluminescent organisms.”

The Merritt Island refuge is home to 1,500 plant and animal species. Among them are dolphins, which are as mesmerizing as the manatees. Buzzi says he once had a pod of about 20 dolphins pass by. When they exhaled, he could see the water spouting from their blowholes glowing neon blue.

This area also happens to be packed with mullets that tend to jump out of the water. In other words, be prepared for a mullet or two to land in your kayak.

It’s not inexpensive to see this eerie blue glow, at $74 for adults, $59 for kids up to 17, and free for under threes. But it’s clearly a magical experience.

As Patterson says, it was just as special to witness the celestial happenings. “Living in a densely populated area, the most striking aspect of kayaking at night within the refuge was the night sky,” Patterson says.

Because it was a clear, dark night when she went and because the 140,000-acre wildlife refuge has no light pollution, she had a stellar view of the Milky Way. That said, Buzzi says your best bet is to go on the darkest nights. He recommends a night with a 55 percent moon phase or less.

“Experiencing the bioluminescence in a clear kayak is a totally surreal experience because you’re suddenly engulfed in it from all angles,” Patterson recalls. “Instead of seeing the glow behind you or next to you, it’s suddenly surrounding you from all directions.”

If you have an option on which night to go, call ahead to find out what conditions are like to ensure a dark night. You should also wear bug spray, long pants, and long sleeves. Although the bioluminescent season typically lasts from June through October, the brightest months tend to be July and August. See the moon-phase calendar here.

OutdoorHow To Get Outdoors on the Lakes, Rivers, and Shores of Central Florida
Tagged
Outdoor Paddling Florida, United States
What did you think of this story?
Meh
Good
Awesome