Often thought of as just a neighboring city to Barcelona, Valencia doesn’t get nearly as much recognition as it deserves. The Mediterranean city has a rich history shaped by Roman, Islamic, and Christian influences that create a very unique, charming ambience with a strong sense of Old World European legacy. Peppered with cathedrals dating back to the 12th century, Valencia is a real treat for architecture lovers. The star of the city is St. Mary’s Cathedral. It draws a crowd from all corners of the world, eager to see the gemstone-embellished chalice that Jesus is said to have drank from during the Last Supper. This is just one of the city’s many old structures that look humble from the outside but have lavishly decorated interiors full of art.

A tour of Valencia’s old center feels much more like a journey through time as opposed to simply exploring a beautiful Spanish city. Here’s what to see and how to enjoy the city’s rich architecture. 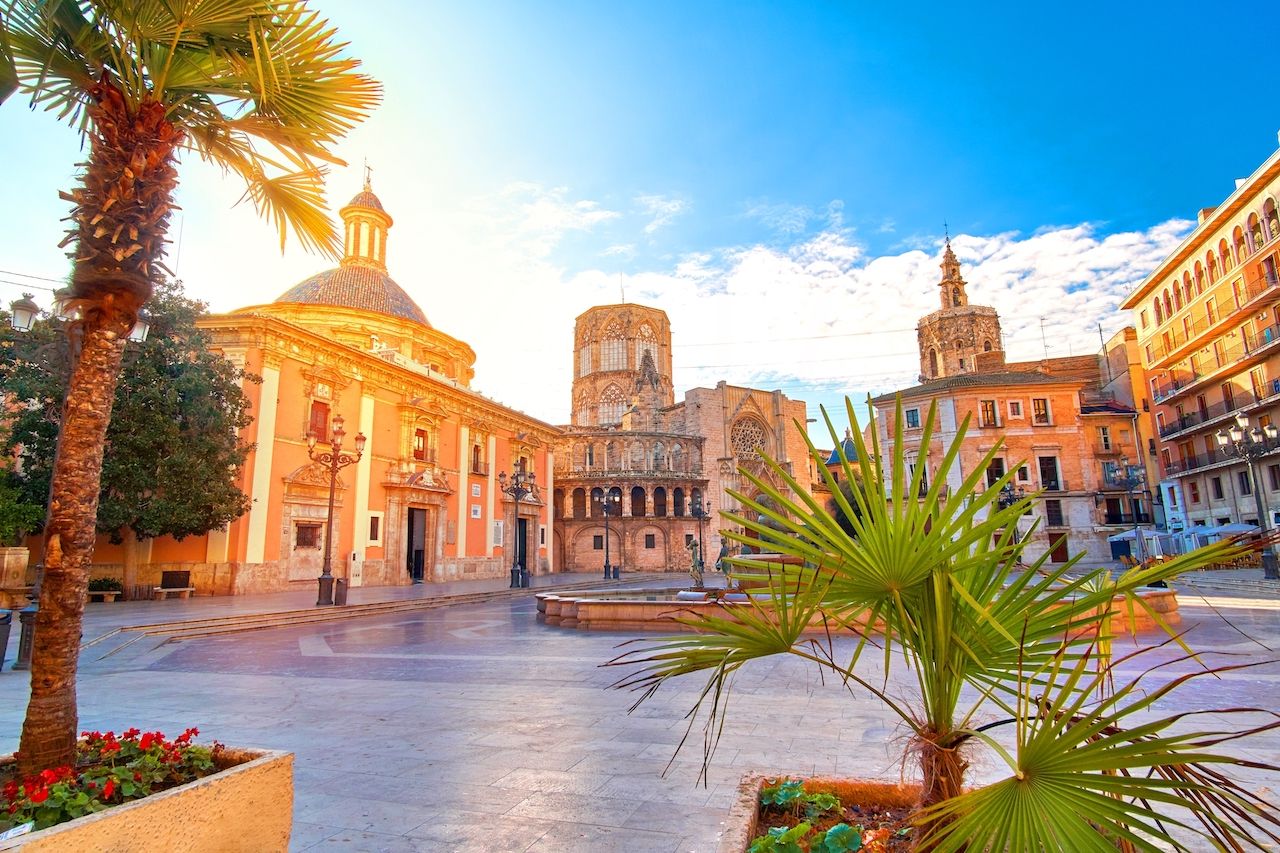 The heart of Valencia is concentrated around a few key buildings — the post office, city hall, and the train station connected by the central square. Once a bustling flower market and a busy intersection, the central square was transformed into an exclusively pedestrian plaza in 2015 where locals come to relax, chat, and read the paper in the morning.

Across the street, you’ll find the central post office. This large building combines neo-Gothic and Baroque elements and looks more like a museum than a place to run errands.

Walking down the boulevard, you’ll arrive at Valencia’s favorite transportation hub — the train station. Even though the city has a modern airport, many still prefer to go to the station as it provides an opportunity to admire the 1917 trencadís (colorful mosaics) and modernist elements while waiting for the train. A vibrant, ceramics-clad entrance opens up into a luminous lobby where locals grab a bite to eat, read, and shop. The old cafeteria is the most impressive room here, decorated with mosaics and smooth dark wood that invites you to sit down and enjoy the art. 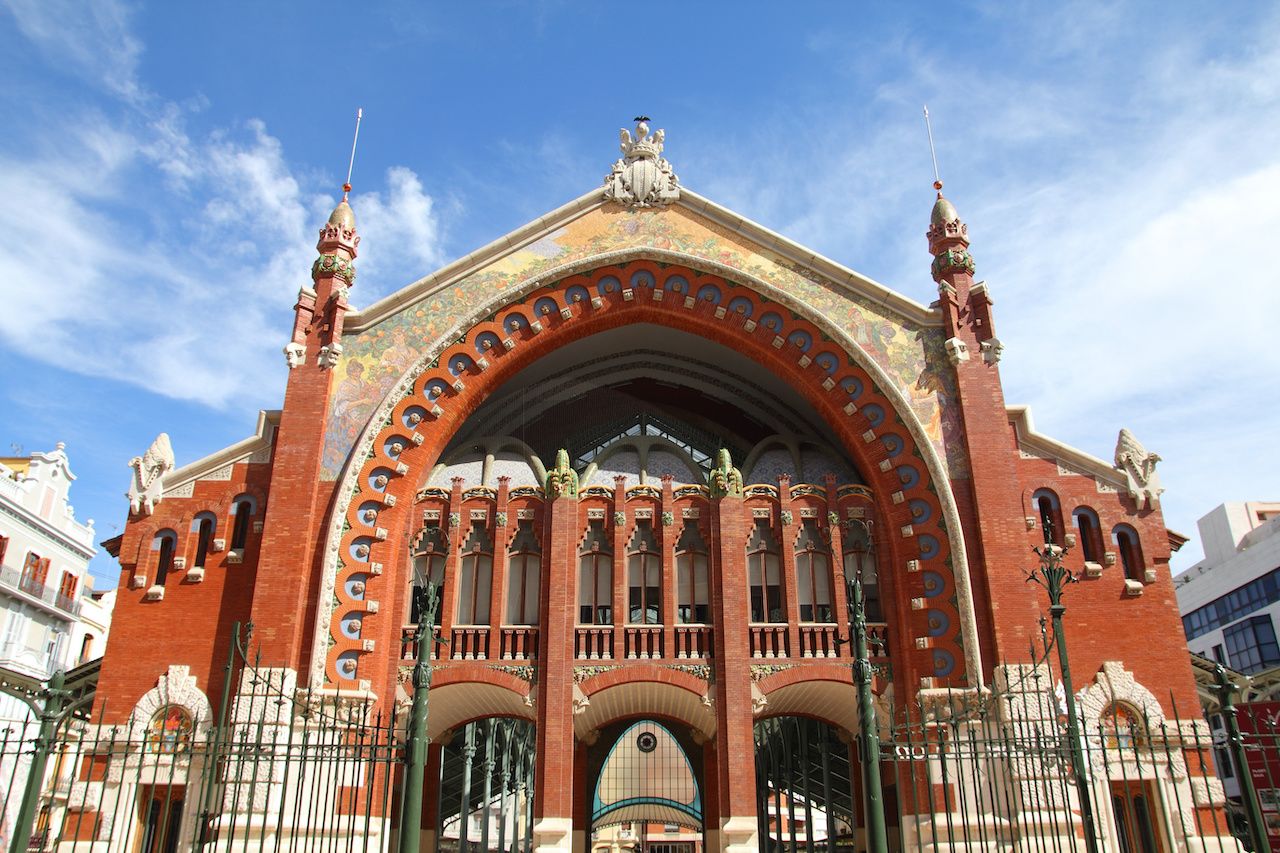 As a bustling European seaport, Valencia has always been home to thriving markets, with Mercado Central being the most important. Initially designed as an open-air bazaar, it was enclosed in the 1830s and transformed into a 26,246-square-foot building. The chic modernist structure adorned with large stained windows and ceramics quickly became a place for the wealthy Valencian elite to gather. The structure’s roof is topped with a cockatoo bird which was a favorite 19th century pet for the wealthy. Today, the market is still a place to shop for fresh seafood, jamón (cured ham), cheese, and other produce. 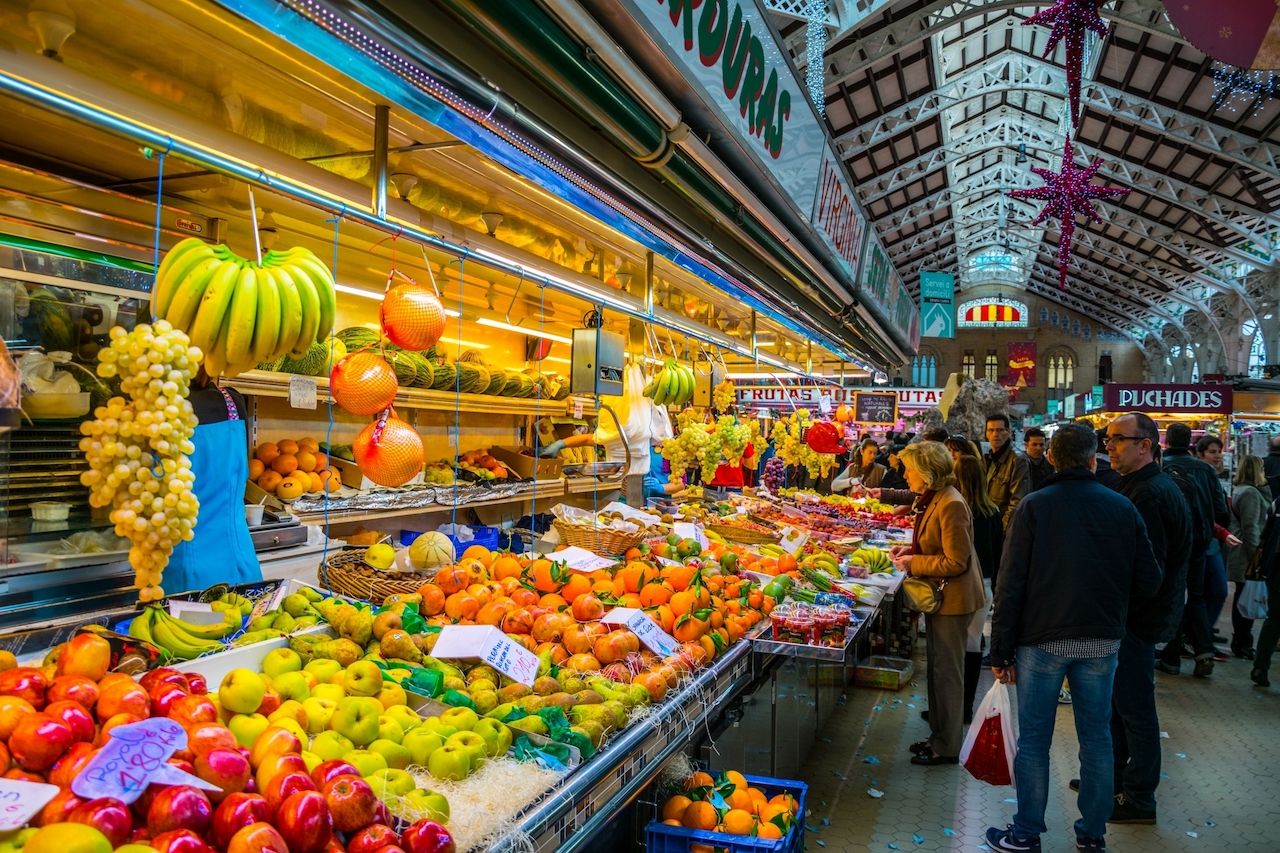 Mercado Colón, the other historic shopping center in Valencia, is equally as beautiful but has a different atmosphere. While Mercado Central is a place to shop, Mercado Colón is a place to sit down, relax, and people-watch while sipping on an ice-cold aperitif. Instead of fish vendors and large legs of cured ham, here you’ll find cozy cafes and elegant restaurants. The market is full of life after six in the afternoon when locals finish their workday and head to the market’s bars to catch up with one another over a cold caña. 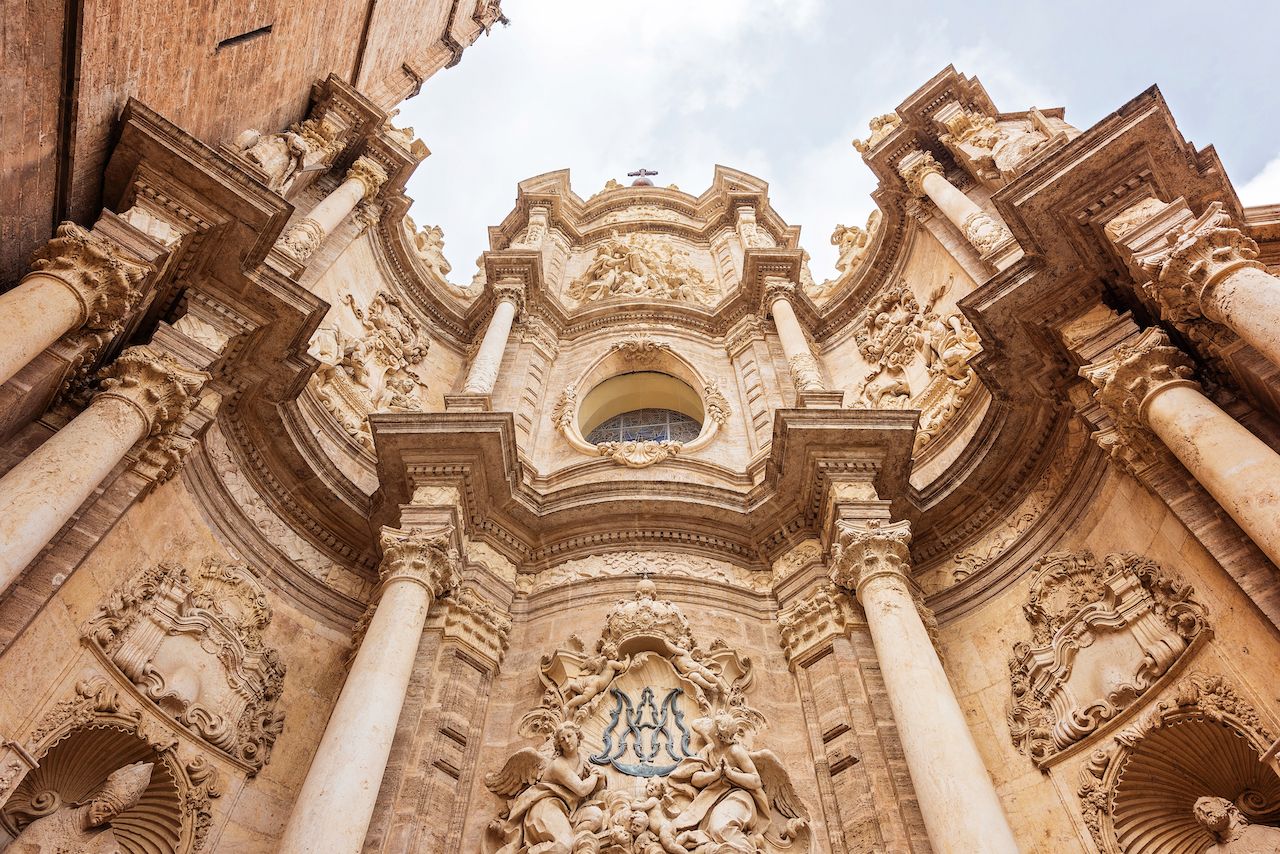 Valencia’s St. Mary’s Cathedral, known simply as “the cathedral,” is arguably the city’s most notable architectural landmark. An imposing Gothic structure, the cathedral was originally a Roman temple. To this day, the underground crypt has ancient stones, bones, and a human skull on display.

The temple is a great place for art lovers to admire Renaissance paintings and priceless relics. In the chapel of San Pedro, there are works by the popular Spanish artist Goya. Another Renaissance work of art, “The Musical Angels” mural, was restored in 2005 and now graces the ceiling above the lavish central altar with its vivid blues. As for relics, the cathedral’s most popular artifact is the gemstone chalice located in the altar room on the first floor. According to the bible, Jesus drank from this chalice during the Last Supper. 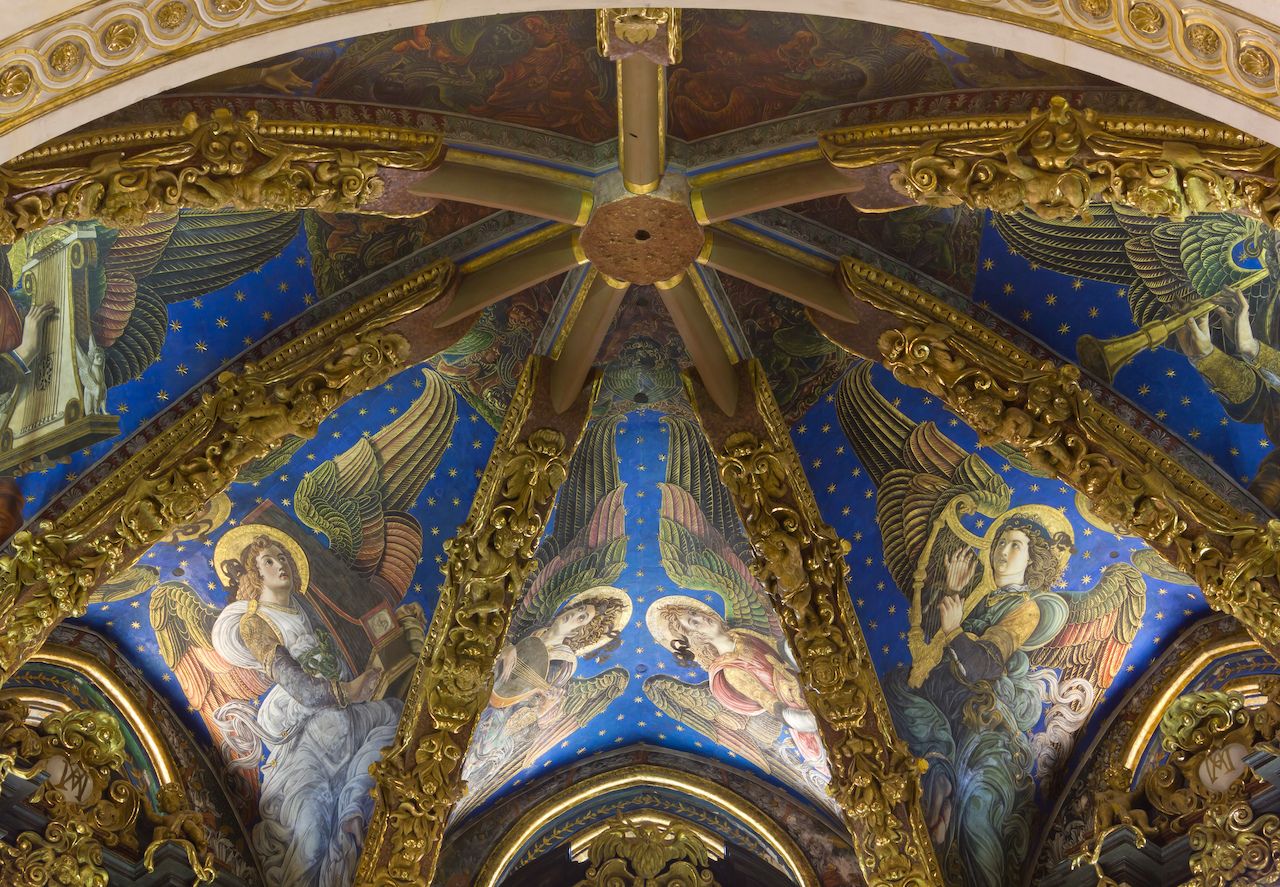 A panoramic view of the city is the reward for those who ascend the steep staircase to the cathedral’s roof. Its facade has gargoyles that serve as outlets for rainwater drainage from the roof, preventing any possible wall erosion.

The Silk Exchange building has over 1,000 unique ornaments 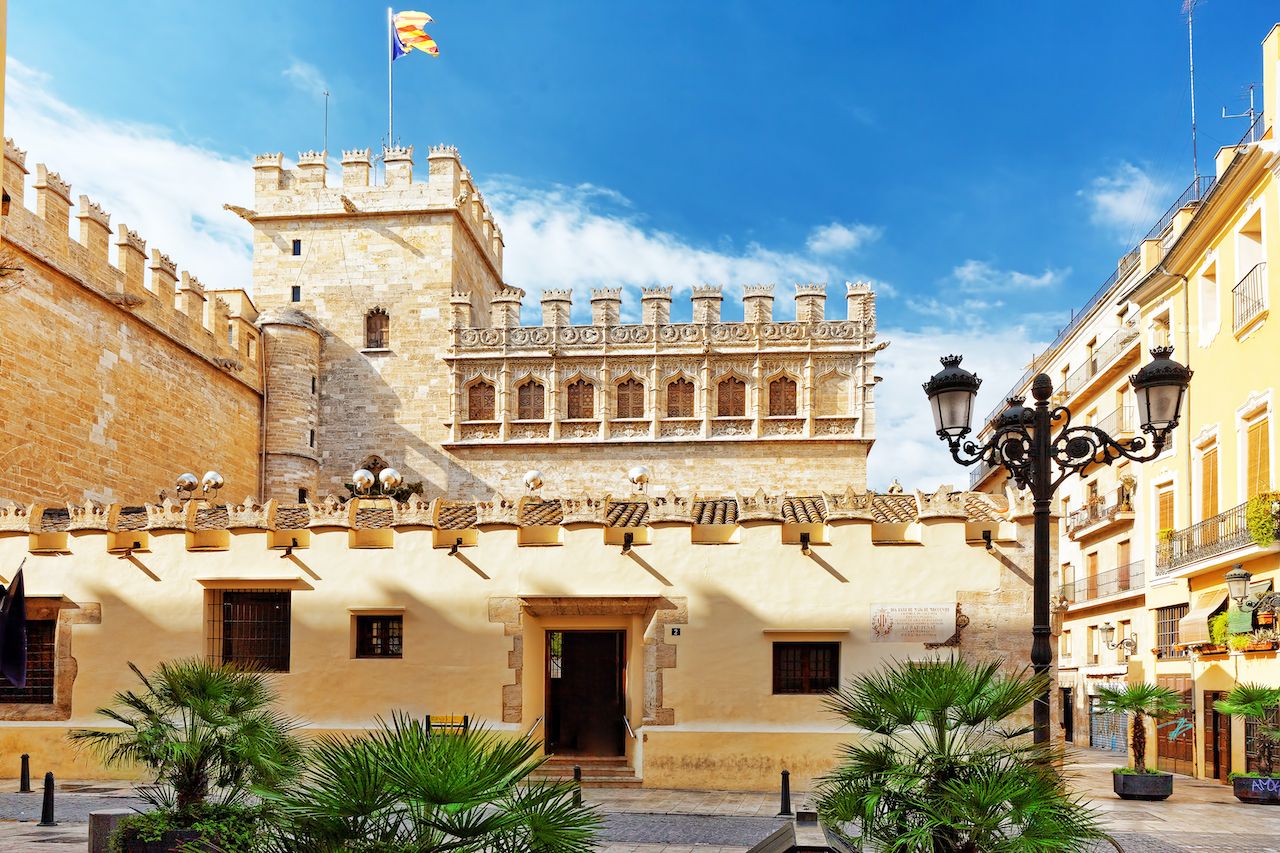 The Silk Exchange, a massive, castle-like structure with thick stone walls, dates back to 1482 — a period known as the “golden age of merchants” in Valencia. Taking around 20 years to build, the structure is named after the prevalent industry in the area, namely the growth and production of silk. This industry employed over 5,000 local residents, including women, which was rare for the time. 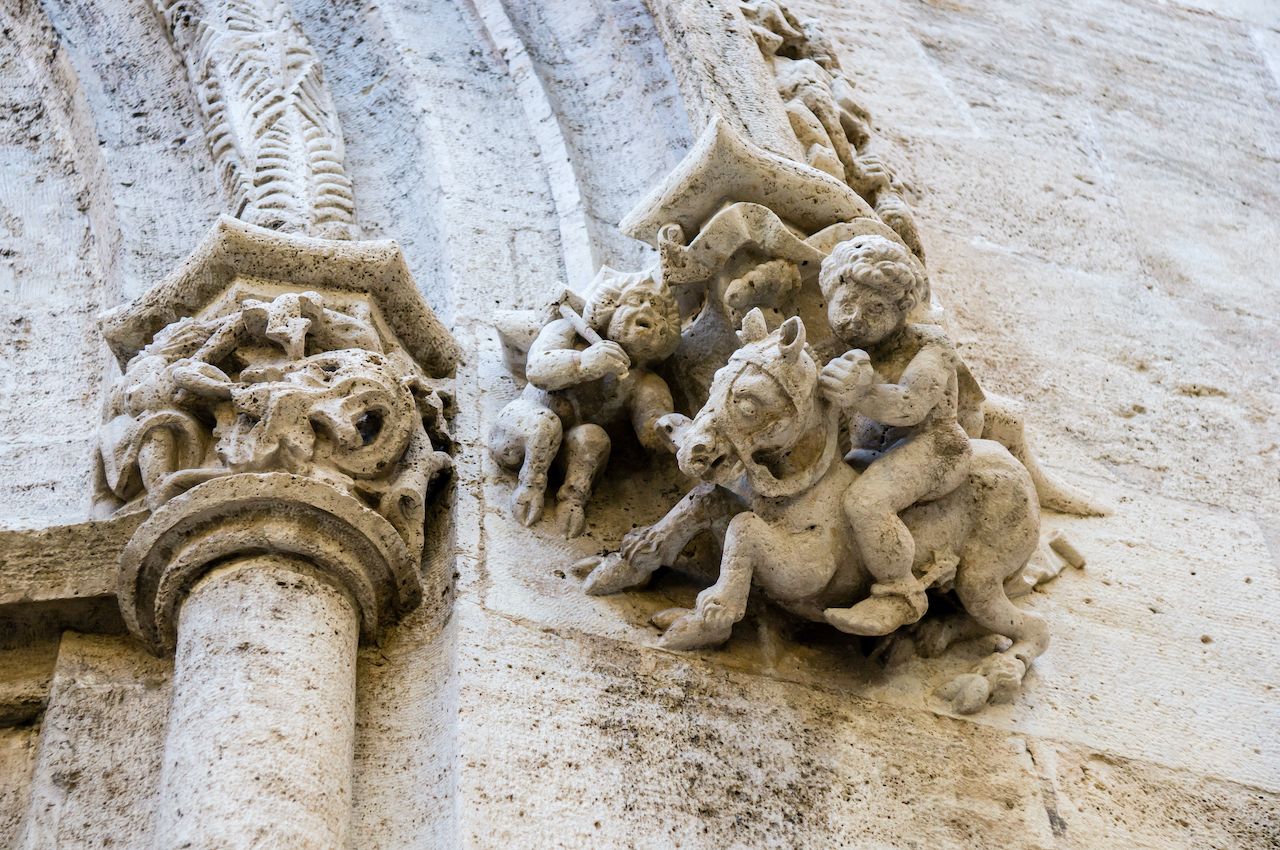 What’s most striking about the structure are the grotesque statues that number around 1,000 and represent the seven deadly sins. Each statue found on the building’s doors, nooks, and halls depicts bestiality, murder, or decay. Merchants didn’t exactly have the cleanest of reputations in the eyes of the priests, so they wanted to publicly demonstrate their dedication to remaining faithful and God-abiding. This is also why a Catholic chapel was built on the first floor, symbolizing their appreciation for the church.

CultureValencia Is the Best City in Spain To Escape Barcelona’s Crowds
Tagged
Art + Architecture
What did you think of this story?
Meh
Good
Awesome