Mark Brand, chef and founder of A Better Life Foundation, calls his childhood in Halifax “troubled.” He spent many nights on the street, while other nights he resorted to couch surfing. His experience was formative, and he’s dedicated his entire adult life to combating the stigma, and the barriers to a stable life, that homeless people face.

Brand eventually became a successful entrepreneur with nine successful businesses, including a restaurant, art gallery, and a music venue. Yet the trauma that he experienced as a teenager as he bounced from one living situation to the next haunted him as he grew professionally. While working in Vancouver’s Downtown Eastside neighborhood, where he found himself confronted by “visible homelessness and mental illness” every day, Brand’s priorities began to shift.

“I realized my journey was not to open a cool guy restaurant,” he says.

Brand started making drastic changes to his life: He sold or closed his businesses that were not focused exclusively on social impact, including his restaurants Boneta and Sea Monstr Sushi. In 2012, he opened A Better Life Foundation, an organization that Brand says works to “secure upward mobility for individuals living in the margins.” Brand felt that he could connect with marginalized communities through food and sharing meals, so he decided to focus his energy on reconnecting with his culinary roots.

How to support A Better Life Foundation:

Purchase tokens from Save On Meats at 43 West Hastings for $3.50 each. Tokens can be distributed to vulnerable or marginalized individuals, and redeemed for a free sandwich at the diner.

Gather your friends or co-workers at Plenty of Plates. Conducted in the commissary kitchen of Save On Meats, large groups can prepare a three-course restaurant-style meal for 75 food insecure people (women and their children living at a shelter, for instance).

Cooking has always been at the center of Brand’s life. His grandparents on his father’s side were farmers. As a young child, he recalls picking raspberries at their small farm, making jam and pickling cucumbers.

“They made literally everything themselves, and I remember thinking, ‘this is magic,’” Brand recalls.

One of his aunts, a chef who would arrive at his parents house and cook up a meal from the few ingredients in their cabinets, mentored Brand throughout his life. From her, Brand says he learned confidence and to “fall in love with the alchemy of food.” He became so enamored with cooking that at 14, he lied about his age to get a job at the pizza shop in the mall learning how to make dough.

These experiences — making his own food with his grandparents and being mentored by his aunt — turned out to be an essential recipe for Brand. They taught him that people in marginalized communities need to connect with their food and the people making it, but also that it needs to be convenient to eat or cook — especially for people who are holding down multiple jobs or are responsible for caring for their families.

As of November 2019, A Better Life Foundation has served 1,000 meals every day, mostly to people living in shelters and transitional housing, and, predominantly, to women and children who have experienced violence, in Vancouver’s Downtown Eastside neighborhood. He works with organizations like Youth Unlimited to deliver meals to parks and under bridges — places that young people without a home might hang out. Delivering meals this way allows social workers to connect with kids in need by asking what kind of help they might need over a meal.

Brand’s team prepares the meals from scratch in the commissary kitchen of Save On Meats, a diner Brand converted from a former neighborhood butcher shop that opened in 1975. “There’s a radio station attached, too, which is fun,” he says.

The shop’s former owner was known for his generous spirit: He’d slice up meat for anyone who came into the shop, even if they only had a few cents. Brand is carrying on that tradition of giving by operating his meal program in the Save On Meats kitchen.

“Our meals are served family style, by our insistence,” Brand says. “We want to convene, we want them to do dishes together. We want them to see each other every day and know that they’re part of a community. We provide that food as a way to say we’re here for you, we love you.” 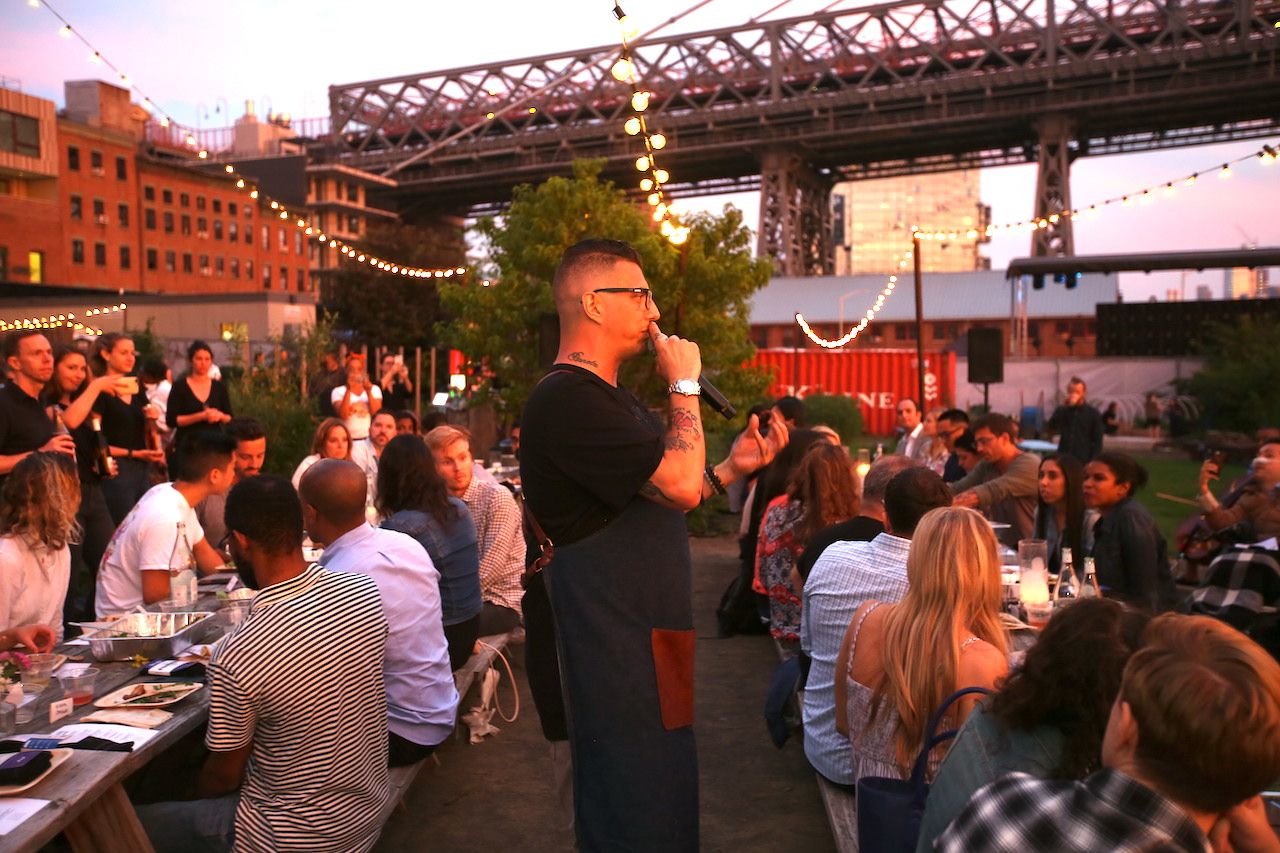 Brand also runs his token program out of Save On Meats. Donors, like local health clinics and community resource organizations like Mission Possible, can purchase batches of tokens to distribute. The tokens can be redeemed at the diner for a free sandwich. The program provides an easy way for a homeless person to grab a free meal, but Brand hopes it will also build trust and rapport between marginalized people living on the fringes of society and the organizations that serve them — whether that’s by providing shelter, food, or social services like counseling and job training.

“We believe very, very heavily in trying to save lives,” Brand says. “So whoever is doing that work, we want to supplement them with food.”

One of the most standout aspects of Brand’s work at A Better Life Foundation, however, happens within the organization. Around 50 percent of his employees faced some kind of barrier to employment at some point in their lives, whether that’s having no fixed address, a criminal record, or living with a disability.

“I couldn’t do what I do without people with barriers to employment,” Brand says. “It’s a false narrative that people with barriers are hard to employ. This is absolutely false. We just went ahead and believed it was the norm because it was easy to believe, but it further marginalized people and disrespected them.”

Brand is now looking to expand beyond Vancouver. He has big ambitions for A Better Life Foundation. Not only does he want to bring his meal program to the US, but he hopes to expand it to include breakfast and after school meal programs for kids, with help from his partners at Knorr. He’s already tested the waters in the Brownsville neighborhood in Brooklyn; Bozeman, Montana; and Sun Valley, Idaho. In each of these cities, he’s held community-led cooking classes primarily for women with children who want to learn how to apply a $20 food budget to a home cooked meal, or only have the ability to cook on a single induction burner at the shelter where they’re temporarily living. In 2020, he plans to tour at least 35 cities, including Oakland and San Francisco, where he plans to replicate these classes.

“I want to try and help people establish their lives, not feel that loneliness and isolation that I encountered,” Brand says. “It’s my duty if I have this skill set, to help people.”

Food + DrinkThe Defining Moments That Changed the Food Industry Every Year of the 2010s
Tagged
Activism Food + Drink Vancouver, Canada
What did you think of this story?
Meh
Good
Awesome

The Best Airbnbs in Vancouver, From a Skyhigh Loft To a Beachside Cabin