Mexico City is replete with meat-centric street food. Corridors of contiguous street vendors extend for city blocks griddling mountains of meat while swarms of people gather to order tacos during la hora de la comida. While most stands have vegetarian options, vegan taco stands are nascent and on the rise. Veganism — once an epithet for expensive yogi food — is being redefined in Mexico City by people like Luis Rodríguez and Melissa Ayala, who are introducing plant-based proteins into local cuisine and traditional dishes like the street taco.

Luis Rodríguez, the founder of one of the first vegan taco stands in Mexico City, Por Siempre Vegana, is a source of inspiration for vegans trying to disrupt the foodscape at a local level. Por Siempre Vegana was founded in 2006 because Rodríguez — a chilango, or resident of Mexico City — didn’t want his veganism to prevent him from partaking in an integral part of Mexican food culture: the taco stand.

“Taco stands have specific characteristics that are emblematic and ubiquitous,” Rodríguez says. “Regardless of where you are in Mexico, taco stands will have a similar aesthetic, flavor profile, smell, and feel to them. When I opened Por Siempre Vegana, I wanted to preserve these characteristics while offering plant-based options as an alternative to meat.”

Rodríguez is altering the local foodscape by making dramatic changes in the source of protein in tacos. He does not expect people to pay more for something unfamiliar, nor is he asking people to associate veganism with foreign flavors. With Rodríguez’s food, the choice to eat vegan is a simple one: The flavors are as good or better than meat. It’s a similar ethos as popular meat-imitation brands like Impossible Foods and Beyond Meat. Only, Rodríguez does not concern himself with recreating the red hue of a medium-rare cooked hamburger. The vegan al pastor tacos at Por Siempre Vegana have the same iridescent orange color to them as al pastor tacos made with pork.

Next to the griddle in Por Siempre Vegana, a skewer pierces through layers of plant-based protein stacked one atop the other into a conical form. A bright slab of pineapple crowns the shape. From color to texture to smell, this vertical rotisserie is evocative of the al pastor cones found spinning slowly in so many taco stands around Mexico City. But the sliced ribbons of marbled meat that fall into the tortilla are vegan and not pork. 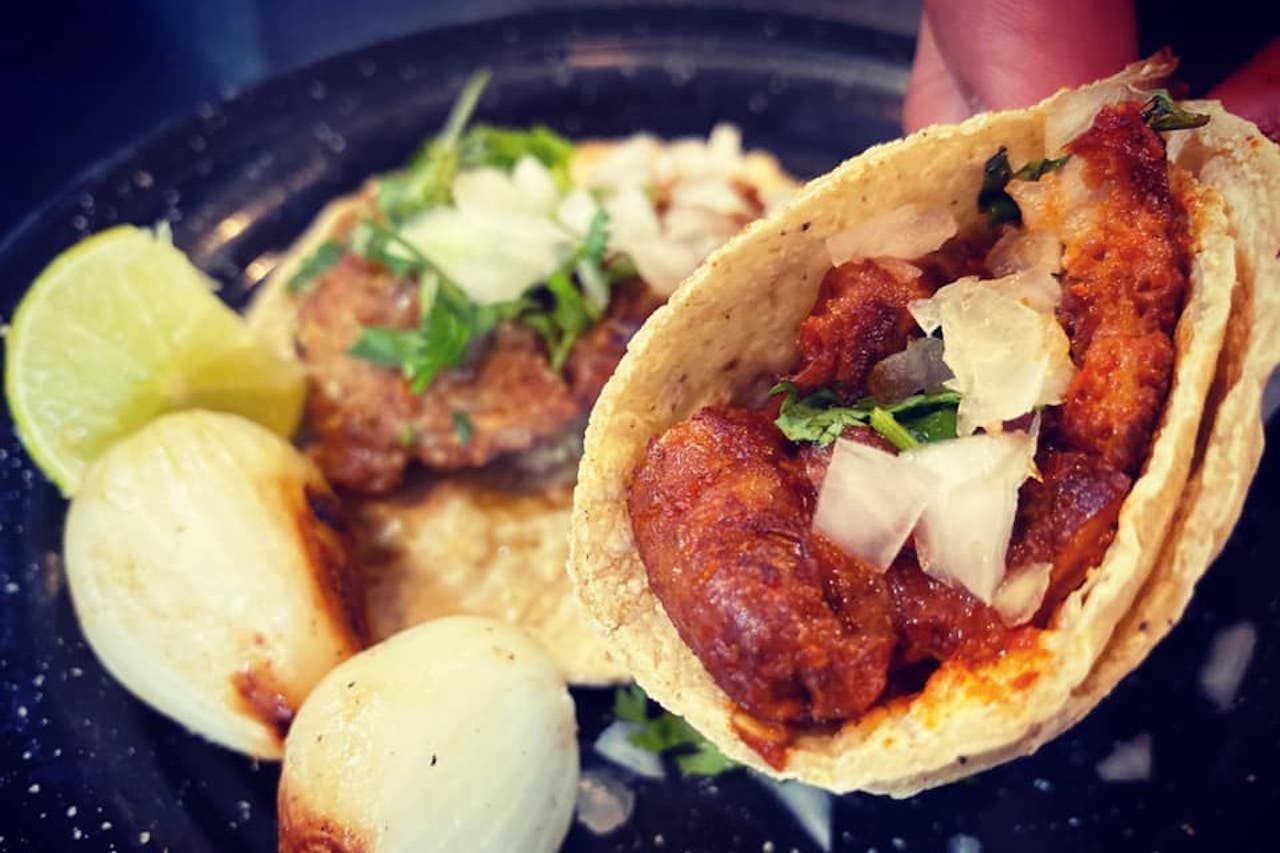 Rodríguez is hopeful when he talks about the future of the vegan movement in Mexico City.

There are many aspects of Por Siempre Vegana that make it a worthwhile stop if visiting Mexico City. After trying the al pastor and green chorizo taco, you might find yourself circling back to this inconspicuous taco stand that attracts everyone from neo-punk anarchists to itinerant travelers. It probably won’t be because they are great vegan tacos — they are simply great tacos.

The flavors that celebrate the history and traditions of Mexican cuisine are passed down in marinades, salsas, and moles. Al pastor — the quintessential Mexican taco — does not refer to thinly sliced pork, but rather to the marinade of chiles that coats the pork. The display of colorful salsas and pickled vegetables at a taco stand hint at the essence of a taco: Meat is another topping along with the spice of salsas, the crunch of cabbage and onion, the bright flavor of pickled carrots, and the freshness of chopped cilantro and squeezed lime. 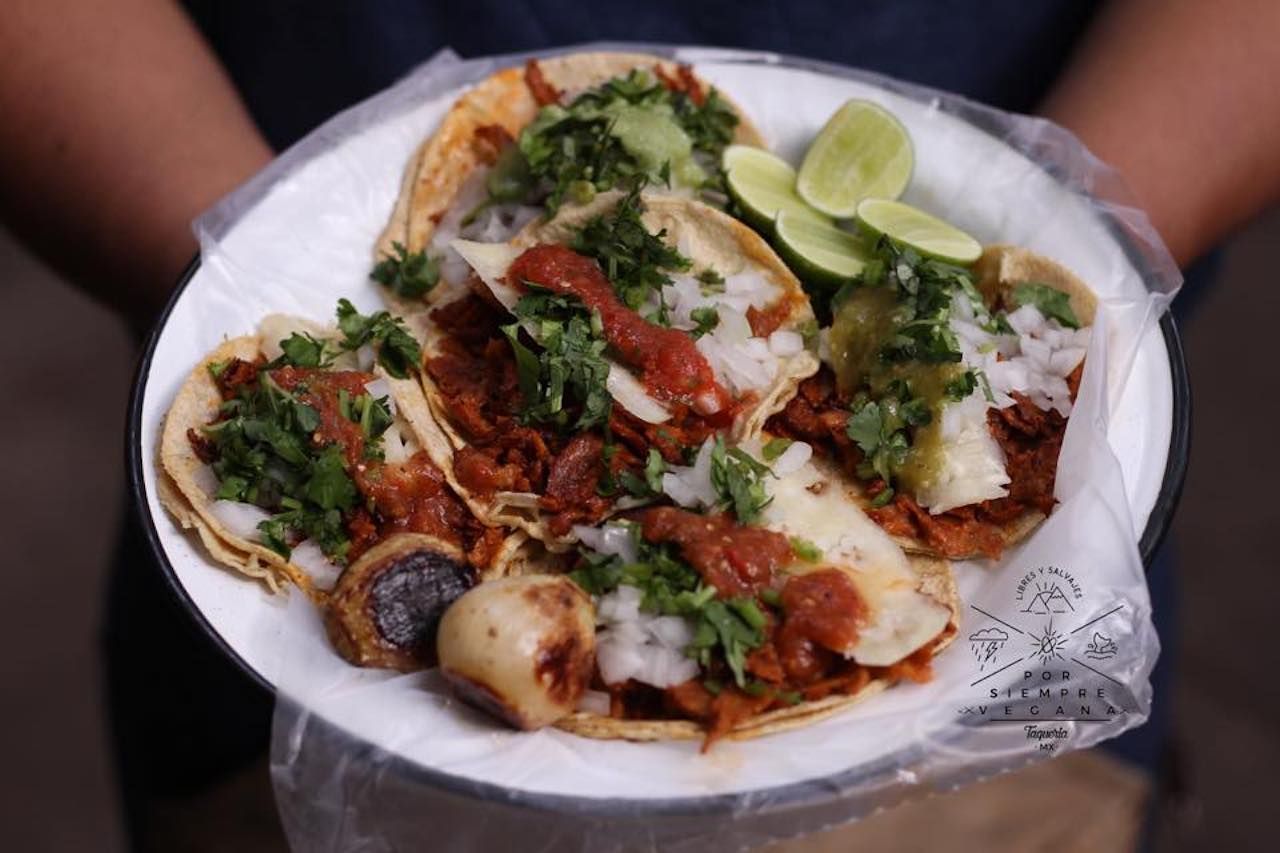 Melissa Ayala, the founder of Gatorta, greets me at her vegan taco stand on the fringes of Mexico City’s Roma neighborhood. She stands behind a smoking griddle chopping and mixing faux meats that smell similar to the real thing. Her body is scrimshawed with cat tattoos and her face framed by fantasy color dreadlocks. Her turquoise-trimmed taco stand with Maneki-neko cats perched throughout — their paws waving rhythmically — stands out from the metallic street vendors that flank her.

Gatorta opened in 2016 to create foods that are representative of Mexican culture and eliminate animal suffering from the cuisine.

“We know people like the flavor of meat because we did!” Ayala says. “But we believed we could recreate the flavors that are so beloved in Mexico without the suffering.”

While prices at Gatorta are similar to those of its neighboring vendors, portions are more substantial than a standard street taco. “We offer larger portions because we want to compete with the market and to do so we need to attract people who don’t identify as vegan,” Ayala says.

Through trial and error, she and her co-founder, Ángel Gonzáles, perfected the masa, or dough, they use to create the plant-based tacos at Gatorta. Unlike the traditional masa made with corn flour that’s used to make tortillas, the masa at Gatorta is made with soy flour and wheat gluten, which are higher in protein. The marinades used in the al pastor, pibil, and suadero tacos are from recipes passed down to Ayala by her grandparents. While the curd-like texture of the vegan protein has a different texture than sliced pork and beef, the complex flavors of the al pastor taco are familiar. The pibil taco has citric undertones of orange and lime that are characteristic of the Yucatán-style barbecue, and the cardamom and clove seasoning is a creative take on the traditional suadero taco. 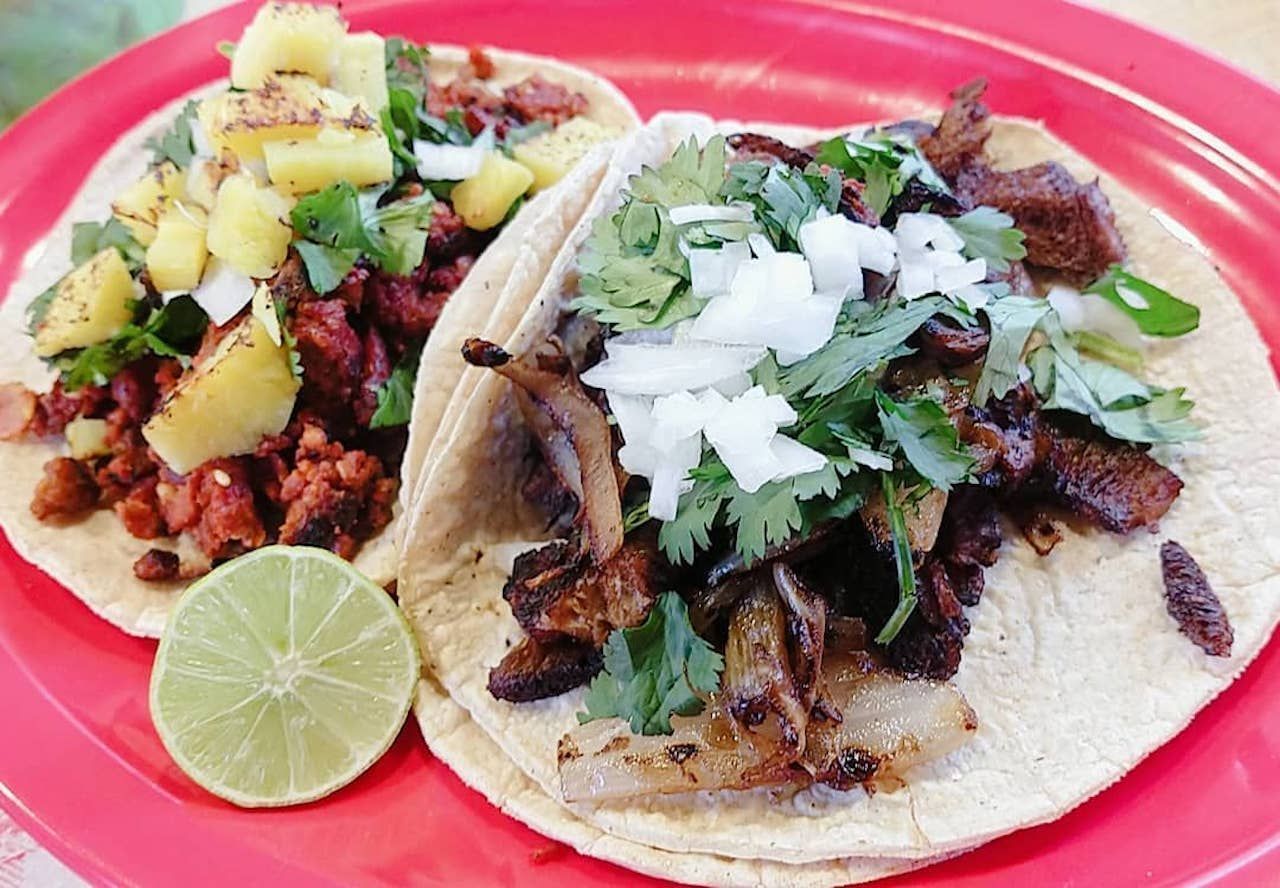 Gatorta offers eaters the Mexican street food experience by serving traditional flavors, a standing experience, and economical prices while dispensing with the environmental impact of livestock products. “We use flavor to attract people rather than our beliefs,” Ayala says. “While animal rights, environmental factors, and health benefits drove us to veganism, we are aware that not all people share these beliefs, so if we can win them over through flavor, then we all are winning.”

Price, flavor, nutrition, and convenience cannot be overlooked by the vegan movement when thinking about factors that contribute to our meat-eating predilection. While companies like Impossible Burger and Beyond Meat are addressing these on an industrial level, Por Siempre Vegana and Gatorta are changing the foodscape at the local level by widening the breadth of vegan eating experiences. Vegan or not, venturing to try a taco from one of these stands is a unique way to experience Mexican street food culture.

Where to try vegan tacos in Mexico City

Por Siempre Vegana: One of the city’s original vegan taco stands. The food here is affordable and delicious. Try the vegan al pastor made with plant-based protein and sliced off a cone similar to the rotisseries at meat-centric taco stands in Mexico City.

Gatorta: A vegan taco spot that serves large portions without a large price. The tortillas here are made with soy flour and wheat, and the marinades for the plant-based protein are made using recipes passed down to the chef from her grandparents.

La Pitahaya Vegana: For those drawn to Instagram-worthy food presentation, La Pitahaya Vegana in Roma Norte offers a fun twist on traditional Mexican tacos. Tacos are served on warm fuchsia-colored corn tortillas that are made to order. These ostentatious tortillas acquire their color from beet juice and offer a fun twang of innovation to dishes like the oyster mushroom al pastor and the roselle flower pibil.