On April 10, Burning Man announced it would not be hosting its festival in Nevada’s Black Rock Desert, where it’s been held every year since 1990 and which in 2019 attracted 70,000 participants.

“I am here to tell you that we will not be collaborating on Black Rock City in the desert this summer,” said Marian Goodell, CEO of Burning Man Project (BMP) in a video message. Goodell added that Burning Man would instead be held virtually — noting that, anyway, this year’s theme was “The Multiverse.”

Matador reached out to BMP, but Communications Manager Dominique Debucquoy-Dodley wrote by email, “We aren’t doing interviews at the moment,” and referred us to the official announcement. So we spoke to some devoted Burners instead.

No surprise, and maybe a relief 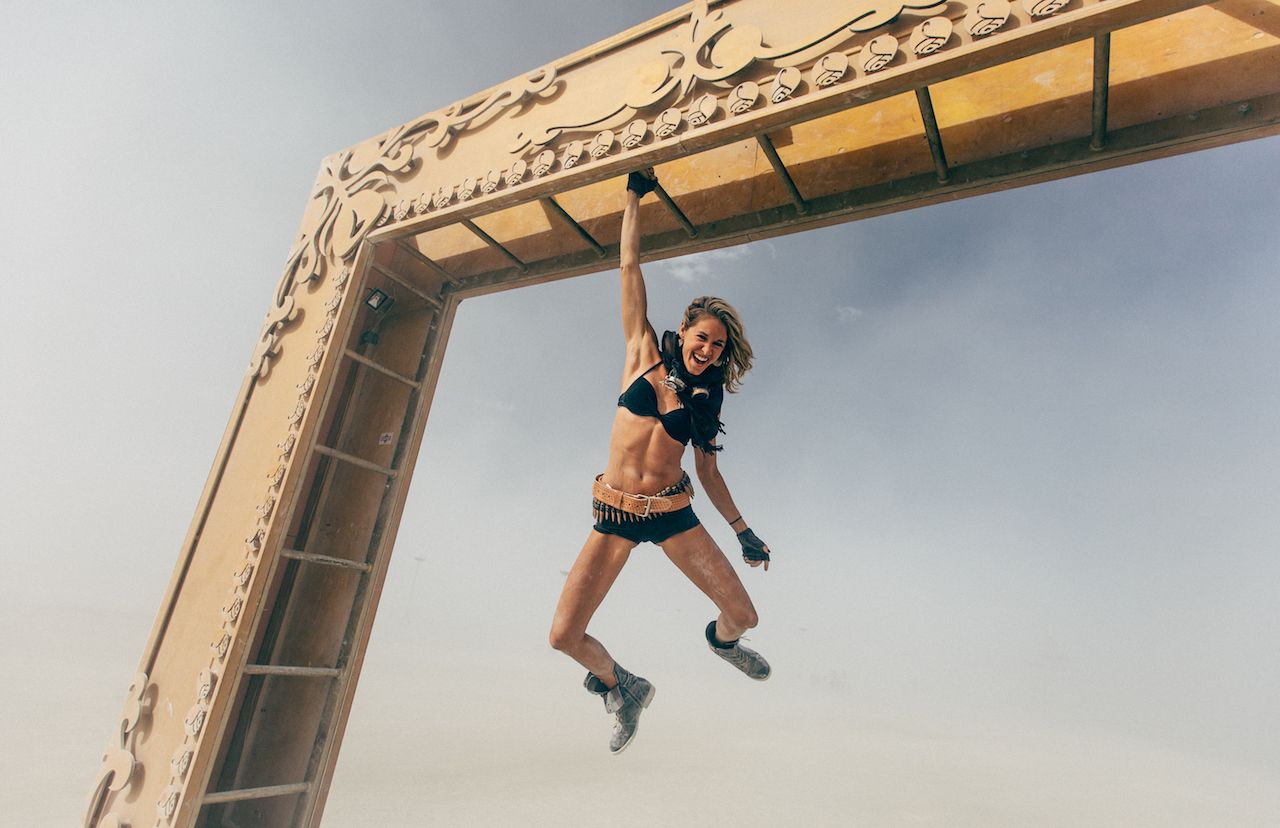 The announcement itself came as little surprise to the Burners we spoke to, and was in some cases a bit of a relief.

“It got to the point that we thought if they don’t call it, we are not going to be able to complete it, because we lost too much time,” said Julia Whitelaw, who has been working with her husband, sculptor Marco Cochrane, to create a massive, new metal sculpture for Burning Man. In previous years, Cochrane’s 40-foot-tall Bliss Dance and 55-foot-tall Truth is Beauty sculptures have been some of the most celebrated art pieces displayed in the Nevada desert.

After shelter-in-place was mandated in California, said Whitelaw, she and Cochrane had to halt critical work on the art piece. Even as Cochrane continued to do the work that only he as the sculptor could undertake, volunteers couldn’t come into the studio for the build. While Whitelaw had raised half of the money by that point, she couldn’t do more.

“Not just for us, but for all of the artists, it was a crucial two to three months of build time and fundraising, and none of it could happen,” said Whitelaw.

While some artists might have been able to scale back their creations, that would not have been possible for her and Cochrane, said Whitelaw. Gaia will be a 40-foot-long sculpture of worked metal, and there’s no way to cut that down. She and Cochrane are now planning the sculpture for 2021. 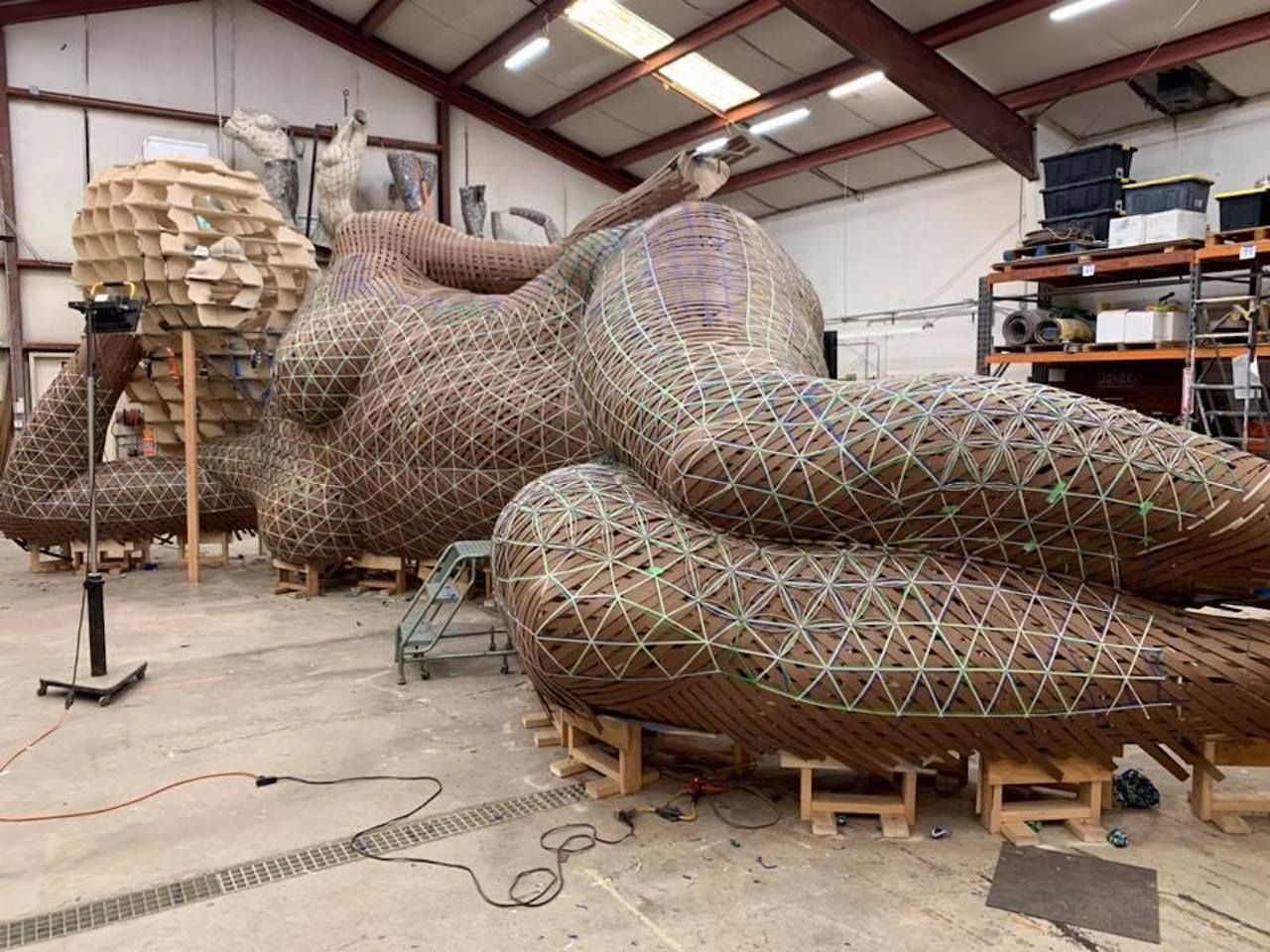 Like Whitelaw, Keith Harris said his group started to discuss the idea of a year without Black Rock City, as the temporary desert metropolis is called, and used the opportunity to think about their core values.

Harris is part of Space Cowboys, which has been a key Burning Man camp for the last 20 years. In addition to hosting a hugely talented roster of DJs — among them Harris, who goes by the DJ name Deckard — the Space Cowboys bring to Burning Man an impressive art car called the “UNIMOG,” which they bill as “one of the largest off-road sound systems in the world.”

“We saw the writing on the wall and thought maybe we should just… start thinking about the reason we all do this in the first place, which is the community aspect,” said Harris. “So when the quarantine hit, and the Burning Man news hit, our camp was kind of charged up already to be doing something.”

Even before Burning Man was canceled, Harris said Space Cowboys started doing “LIVEcasts” to raise money for local causes. This was not new to Space Cowboys, who in the past had raised money for groups like the Marin Food Bank — but in today’s lockdown environment seemed more pressing than ever.

“The LIVEcast shocked us in a good way,” said Harris. “Not just getting all these people to show up and be participants in the dance party but also the raising money aspect.” Harris said the group has raised several thousand dollars for charitable causes.

The Space Cowboys are not alone. Other Burning Man-affiliated groups have been holding music livestreams and even online talent shows to raise money to give back to the community. These events suggest that Burning Man ethos of community and supporting one another will survive a year without the actual Black Rock event itself.

At a time when people have seen the Burning Man concept itself threatened by the onslaught of turnkey camps populated by wealthy A-listers who show up mainly just to fill their feeds with really good party pictures, this year’s reprieve may be just what is needed to refocus on its core principles.

“It’s actually happening already,” said Michael Raneri, who’s been attending Burning Man since 2008 and has become active in the Burning Man community. Raneri said he feels that the conditions of the pandemic are forcing people to be self-reliant, a key tenet of the Burner philosophy. Raneri said he has also seen the Burning Man “gifting” culture coming through as neighbors help one another in the Lake Tahoe community where he’s been sheltering with his family.

Burning Man is more than the Burn 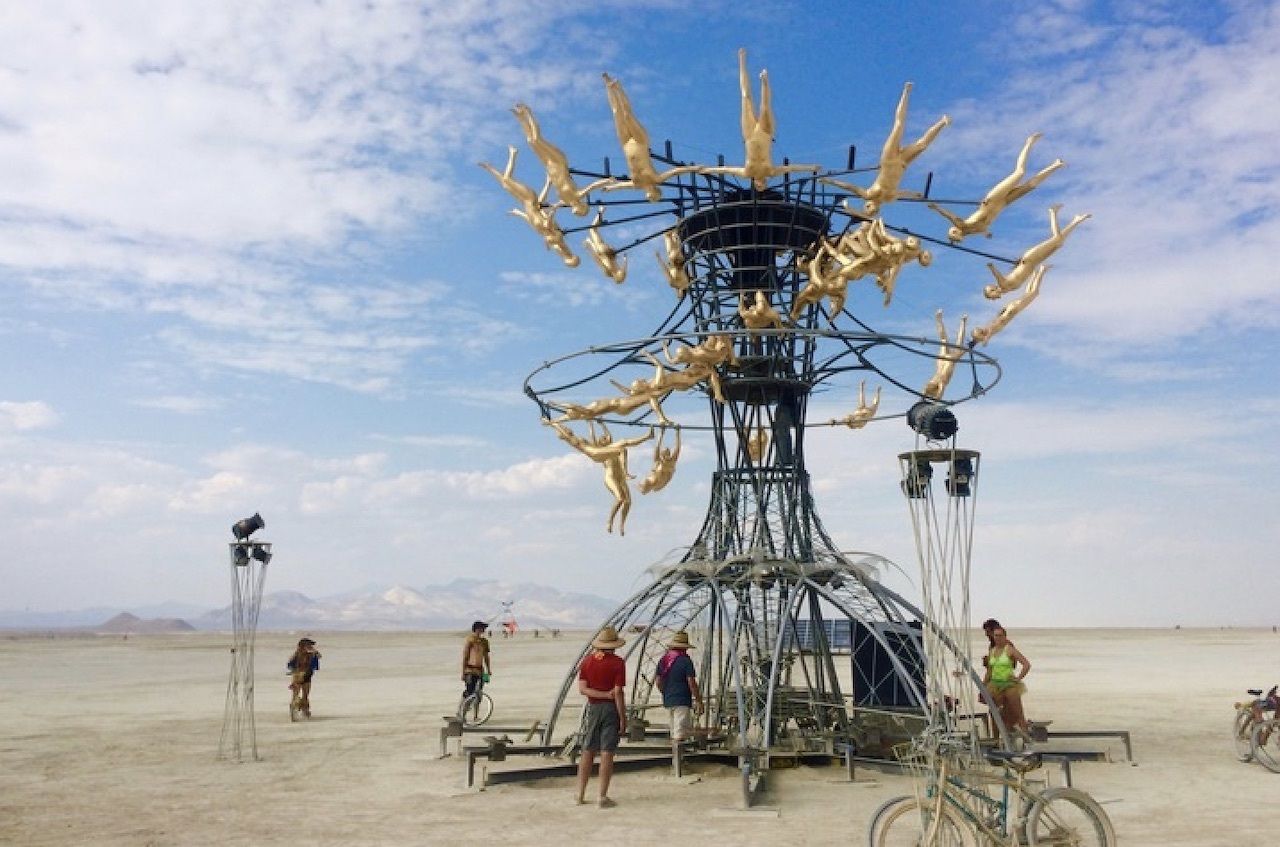 It’s also important to remember that Burning Man is more than that annual, dusty celebration, a point that Goodell stressed in her video address. “We are not just Black Rock City,” she said. Goodell noted that Burning Man is also a hundred affiliated events on six continents, as well as initiatives like Burners without Borders and Fly Ranch, a 3,800-acre property north of the Black Rock City location.

Those other events include a number of regional festivals, which will likely get extra attention this year.

“The regional Burns are actually amazing,” said Karl Weatherly, a 14-year Burner from Sun Valley, Idaho, adding that he and his partner Jinny have been to regional events in Idaho and Austin.

The regional events are small, often numbering less than a thousand people and costing very little money. He said the Idaho Burn, which brings together the Sun Valley and Boise Burning Man communities, has in the past gathered about 350 people in a stunning riverside location in rural Idaho at an attendance cost of about $50 per person.

“I really love the regional Burns,” said Weatherly. “They’re not trying to make money. They’re just trying to break even and make a great community.” The Idaho event happens in early October and Weatherly said he plans on attending if it’s possible, given the pandemic, to do so by then.

In the meantime, Weatherly said he intends to check into the virtual Burning Man Multiverse in August. “I’ll probably join in for the solidarity. This was going to be our 15th year,” he said — and he has the option of doing so because he and Jinny already had tickets to this year’s Burn. 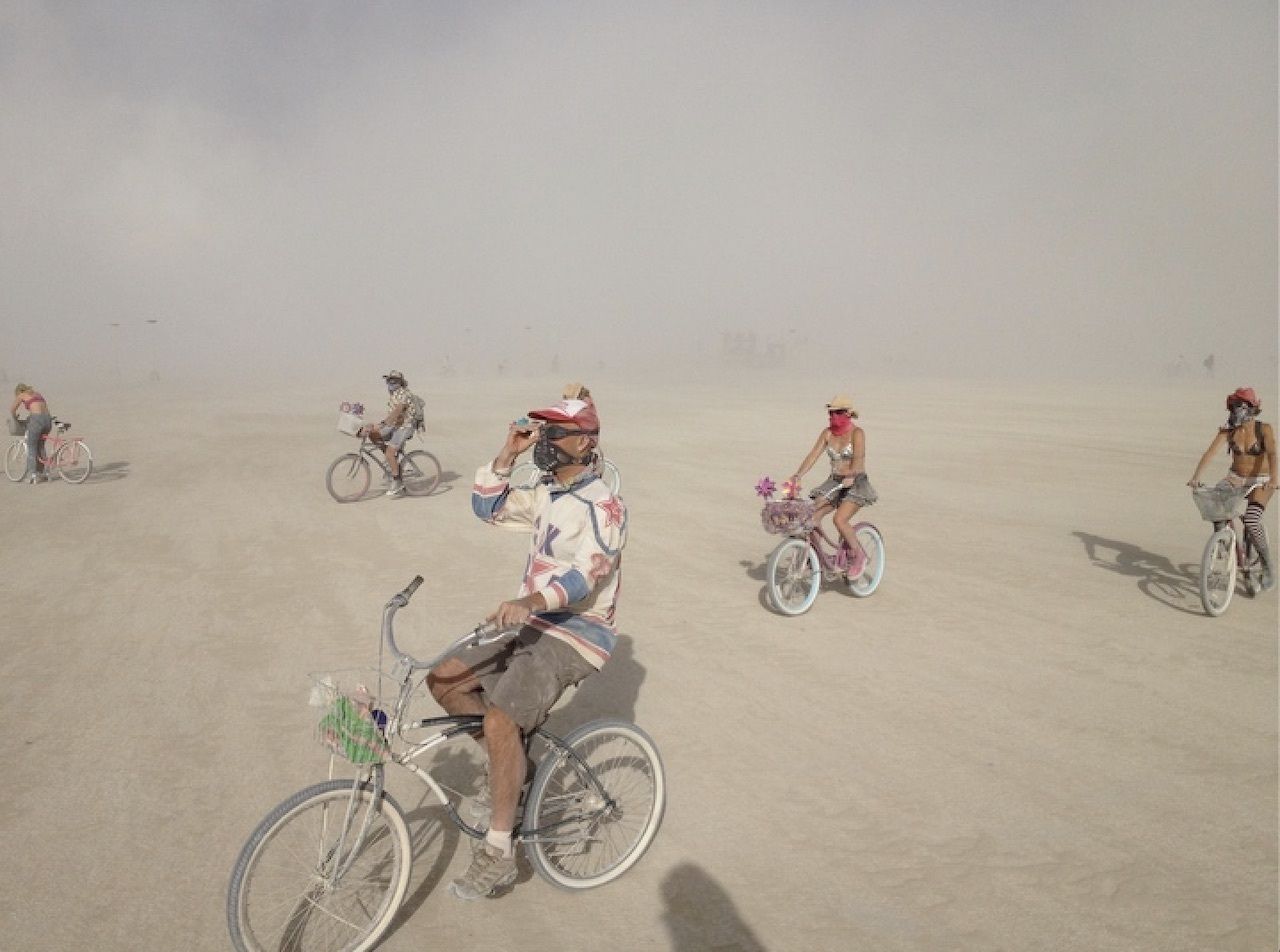 “Burning Man is not canceled,” was a key theme of the official statement, and the Burning Man Project is encouraging people to attend the virtual event. Yet beyond ticket holders like Weatherly, not everyone we spoke to was sure they’d do so.

One longtime Burner told us the prospect of an online event sounds “80 percent less fun.” Raneri, though, said he plans to attend and looks forward to seeing what they will put together. He said a key thing is that the organization not try to replicate the desert-based experience but seek to do something new.

“They’re being really careful and lowering expectations,” said Raneri. He said he hoped that they might create a schedule where you could log into different places to hear DJs or have other experiences.

Harris, the Space Cowboys DJ, sees a risk in asking people to pay for something without knowing if the technology will work. “It’s such a challenge to do something in the tech center and not have it disappoint,” said Harris. “I’d almost rather they do it on a suggested donation with the idea of, ‘Hey, we’re going to try something together.’”

But Harris, like others we spoke to, heard loud and clear the Burning Man Project’s other main message: They are on the hook financially. 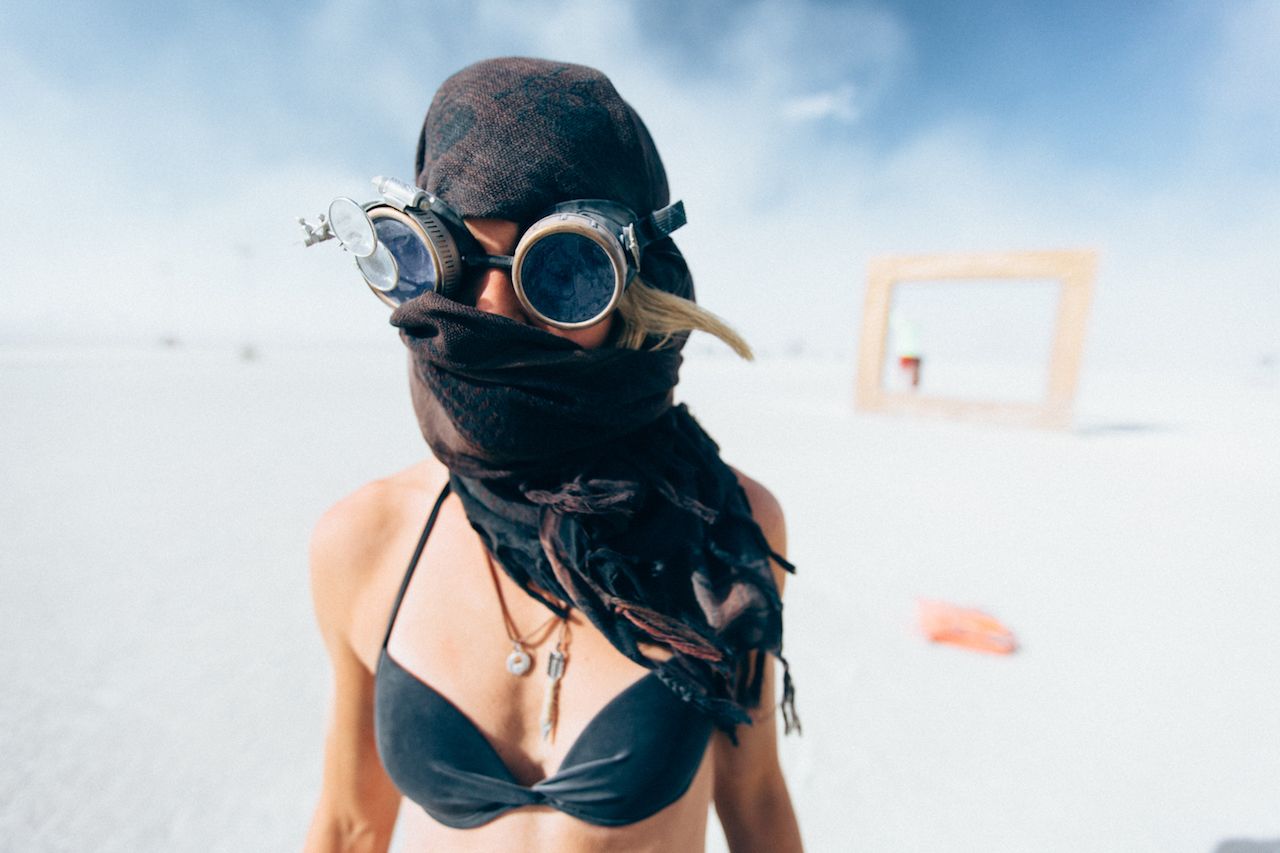 “We need your support,” said Goodell in her three-and-a-half-minute announcement, asking three more times for the community’s help in supporting Burning Man. She said that while the BMP would refund current ticket holders who need it, she asked those with the financial means to do so to consider a gift to Burning Man. “We are scaling back so that we can make it to 2021,” she added.

In their Q&A section on the announcement page, the BMP said they’ll rapidly use up the $10 million they have in reserve: “Truthfully, without major changes, deep cutbacks, and a generous outpouring of donations, we could only stay operational for a few months on our reserve funds.”

Not only is Burning Man feeling the financial squeeze, but holding the festival in its current location was already becoming challenging. The Bureau of Land Management, which is responsible for this arid stretch of land, has in recent years only granted the BPM a permit at the last minute, and then only after a series of onerous requests.

“As you may know, the BLM has been imposing mounting costs and restrictions, making it increasingly difficult for us to continue holding our event in the Black Rock Desert,” said the BMP.

Burning Man may have other options come 2021 since it did purchase a major piece of land north of the Black Rock Desert. Moreover, the coming recession could mean that next year Reno and local Nevada communities may need more than ever the revenue that the annual festival brings in — $75 million, according to the BMP.

Not only may northern Nevada welcome the money the annual event brings in, but people may feel the need to come together more than ever before. Julia Whitelaw, in fact, said that 2021 will be the perfect time for her and Cochrane to share the Gaia sculpture.

While Cochrane’s other sculptures celebrating women were monumentally tall, Gaia will lay along the ground. “The position of the sculpture is horizontal, instead of vertical. It creates this gathering space,” explained Whitelaw, noting that it will also have a firepit there. “It’s this warm, cozy space to collect yourself and meet people.”

Whether that happens in the Black Rock desert, or somewhere else, the Burning Man community is clearly out there and already doing its part to come together and to give back.

EventsBurning Man Is Underway. Has It Solved the Rich People Problem?
Tagged
Festivals
What did you think of this story?
Meh
Good
Awesome