COVID-19 might’ve led to the cancellation and postponement of nearly 500 Pride events worldwide, but there’s one thing the coronavirus forgot to consider before it decided to rain on June’s parades. The LGBTQ community lives by the immortal words of Gloria Gaynor. Surviving is not an option — it’s an absolute.

Deadly pandemics? We’ve been there, done that, and bought the pink-triangle tee. Stay-at-home orders? Keeping us in can’t stop us from coming out. Police brutality? Pass us the bricks. Queer folx survived repression for centuries, and no pathogen can prevent us from finding a way to celebrate our strength.

Since the pandemic began, the LGBTQ community didn’t just learn how to work from home — we learned how to werq from home. As a result, Pride in 2020 has gone virtual, and June has been so jam-packed with live streams, telecasts, and Zoom parties that the illness you’re most likely to catch this week is FOMO… as long as you continue to wash your hands, practice physical distancing, and wear a goddamn mask.

To ensure you stay healthy for the rest of the month, here’s a list of the best international Pride events to help you make the most of this week. 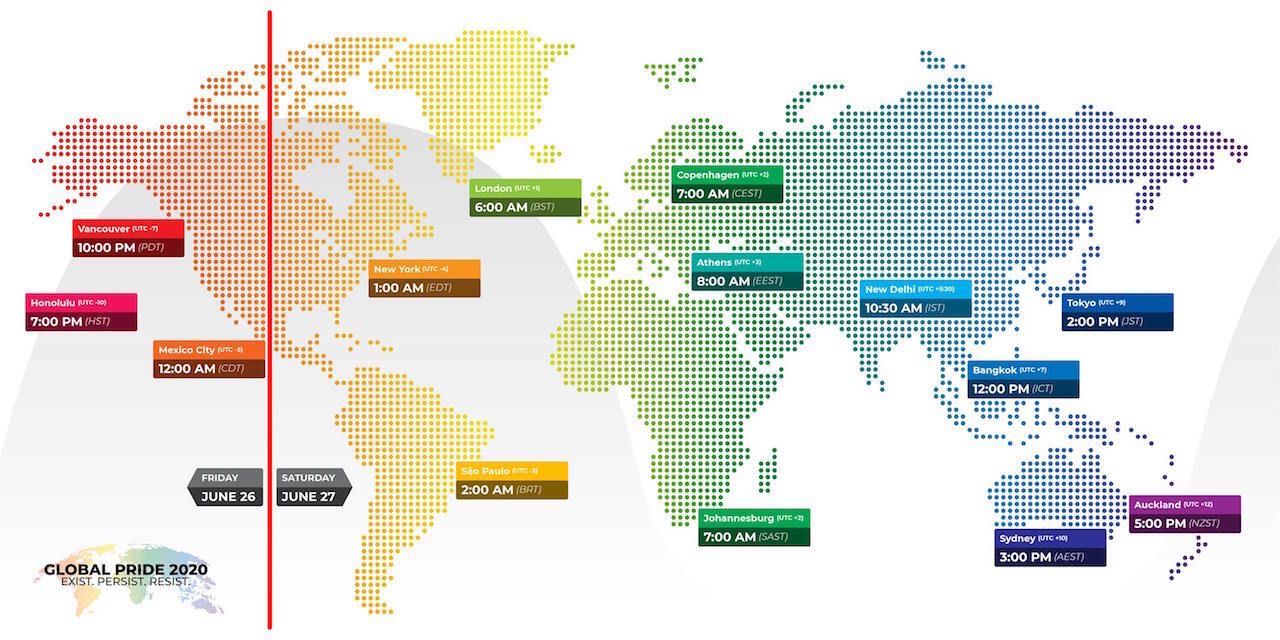 As hundreds of organizations canceled Pride events this past spring, InterPride, the European Pride Organisers Association, and national Pride networks around the world banded together to create Global Pride — an international event celebrating queer solidarity.

The 24-hour festival, which takes place on June 27, will feature speeches by so many political leaders it’ll feel like the UN is throwing a Pride party themselves. Former US Vice President Joe Biden, Canadian Prime Minister Justin Trudeau, Costa Rican President Carlos Alvarado Quesada, and Prince Manvendra Singh Gohil of India are a few of those attending. You can also expect performances by Adam Lambert, Pussy Riot, Brazillian drag queen Pabllo Vittar, and everyone’s favorite gay daddies — the Village People — along with a dozen other exceptional artists. Todrick Hall will host — in a matching mask, glove, soap, and scrub set, we hope.

With organizers projecting up to 300 million viewers, Global Pride has the potential to be the most well-attended and inclusive queer celebration in history. Sign up for the event on Facebook.

Last June, World Pride attracted around five-million participants to the epicenter of the modern LGBTQ rights movement in Manhattan. Although people aren’t sashaying in front of Stonewall’s rainbow-strewn runway this year (unless you’re attending the Queer Liberation March on June 28), NYC Pride is still hosting tons of virtual events so millions more can celebrate from home.

If you’re a fan of The Front Runner, or identify closely with Sporty Spice, sign up for the virtual 5K Pride Art Run and complete the race in your glitziest rainbow attire before June 28th to be eligible for prizes. Share your run on Instagram by tagging @Runstreet.

The most poignant event of NYC Pride is always The Rally, which will take place on Friday from 5:00-8:00 PM ET via Facebook and Youtube. Trans journalist Ashlee Marie Preston and trans actor Brian Michael Smith will lead conversations on police brutality and discrimination — the main catalysts for both the Stonewall Uprising and the protests taking place today.

Whatever you decide to do with your quaran-time, don’t miss NYC’s final event on June 28. ABC will air New York’s 50th-anniversary celebration of the first Pride march from noon to 2:00 PM with Grand Marshals Dan Levy (Schitt’s Creek), Victoria Cruz (LGBTQ activist and survivor of the Stonewall Uprising), Yanzi Peng (director of LGBT Rights Advocacy China), and The Ali Forney Center (a non-profit dedicated to protecting homeless LGBTQ youth). If a performance by queer music icon Janelle Monáe isn’t enough to make you open your Dirty Computer and tune in, Margaret Cho, Deborah Cox, Miss Richfield 1981, or special-guest host Carson Kressley should do the trick.

Although Toronto’s nickname — Queen City — isn’t a commentary on its robust queer community, there’s no doubt this Ontario town wears the Canadian crown when it comes to LGBTQ culture. Just check out their digital Pride options for proof. Toronto is rolling out queer events every day of the month, culminating in the two-day Blockorama festival on the 28th and 29th, with a line up of artists and activists curated by a committee of local Black queer and trans community members from Blackness Yes!

For those unwilling to wait until the 28th for queer content, fear not — there’s a Trans Rally on Friday, a Dyke Rally on Saturday, an online Pride parade on Sunday, and a human rights series about body positivity on Monday. See the full calendar of events on the Pride Toronto website. 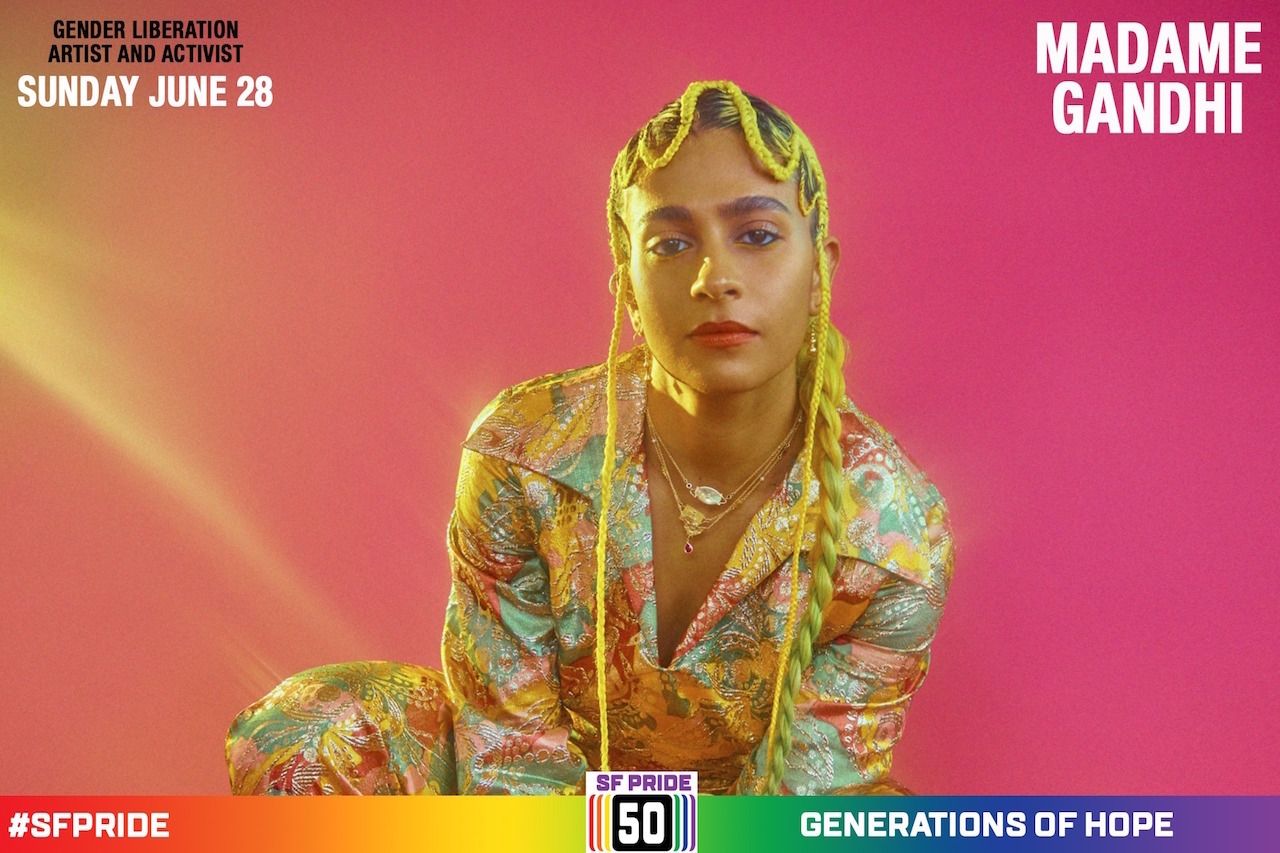 San Francisco, America’s OG capital of queer, will host a weekend-long tribute to the LGBTQ community with 13 hours of performances featuring local celebrities and international stars. New Orleans-based bounce musician Big Freedia headlines Saturday’s events; Grammy-winning songstress Thelma Houston will take the stage Sunday; and artists like Betty Who, Dorian Electra, and David Hernandez will fill out the rest of the musical program.

For social-change warriors, check out the National Center for Lesbian Rights Executive Director Imani Rupert Gordon discussing Black Lives Justice. For pop-music megafans, Kim Petras will explore the history of LGBTQ music (which better include a mash-up of I Don’t Want It At All and Material Girl). There’ll be no shortage of SF’s whacky drag darlings, either. Heklina, Peaches Christ, Sister Roma, and Honey Mahogany will all make appearances. Other must-see events include the Trans March 2020 on June 26, Illuminate the Pink Triangle on June 27, and a CBS television special — Fifty Years of SF Pride — on June 28. Click here for a full calendar of events.

Susanne Bartsch, the nightlife impresario known for producing performances on the cutting edge of cool, will lead a three-hour Pride show this Sunday from 6:00-9:00 PM ET. Entitled On Top of the World, Bartsch’s international lineup of queer icons will do what tops do best — leave you wanting more, even after everyone has finished. A few notable guests include US celebs Latrice Royale and Amanda Lepore, Berlin babes Hungry and Baby Jane, Tokyo’s Jun Nakayama, and London’s Mouse. With her knack for finding and celebrating boundary-breaking performance artists, you can bet Bartsch’s Pride party will be far from cookie cutter. Click here to purchase tickets and check out a full list of performers. A portion of the proceeds will directly benefit the Ali Forney Center in NYC. 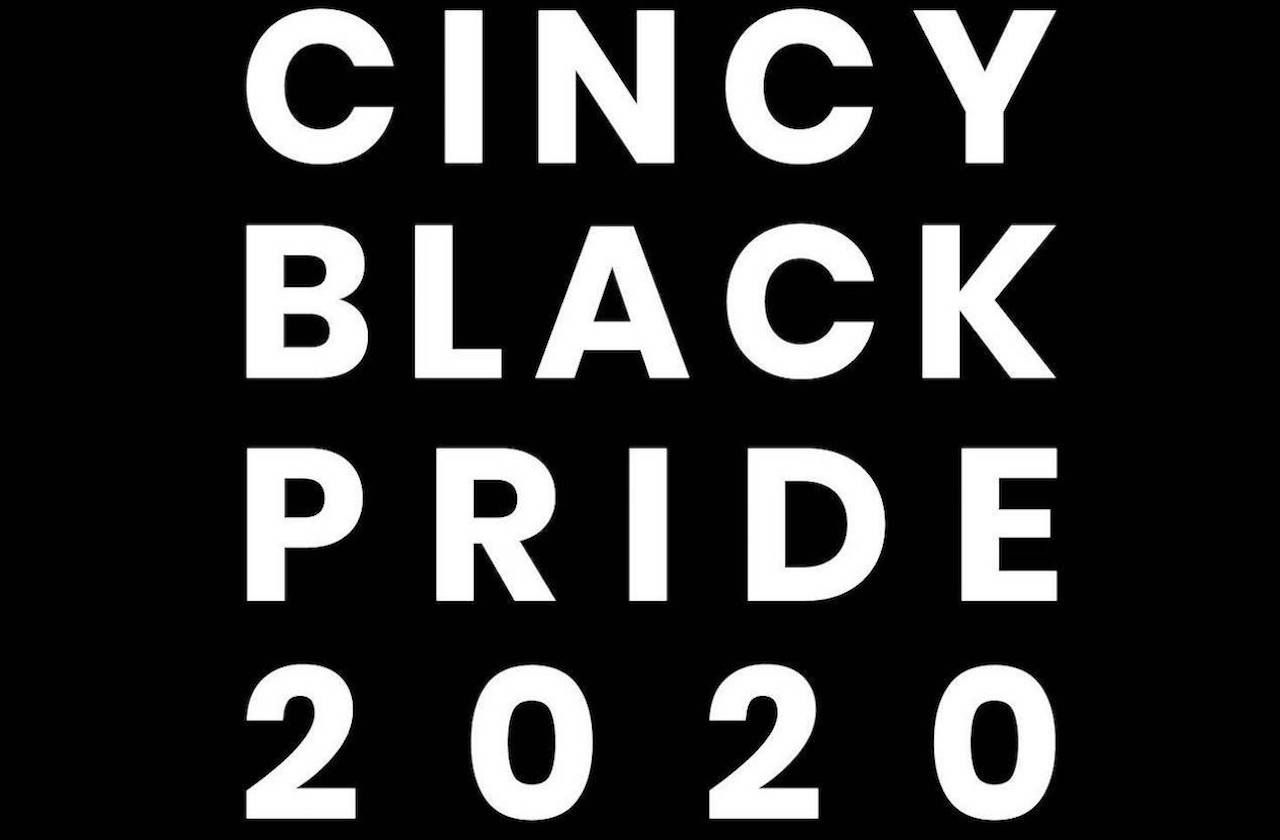 Cincy Black Pride began hosting a series of digital events aimed at both local and national audiences on June 17, starting with a conversation led by public health officials and civic leaders discussing the impact of COVID-19 on the black LGBTQ community. On June 25, the third annual Black Alphabet Film Festival will showcase King Ester, about a trans woman living in New Orleans, along with the critically acclaimed movies Rafiki and Wolf. From the 25th to the 28th, DJs will be spinning everything from Caribbean swirl to post-Motown classics so listeners can cut a rug right in their living room.

You might not find gold at the end of an Irish rainbow, but you may stumble upon something even better — the Digital Dublin Pride Festival, which features fantastic queer events all week long. The festivities culminate in a virtual parade this Sunday at 2:00 PM Irish time, hosted by Paul Ryder and Eddie McGuinness. The Lord Mayor of Dublin and local front-line workers will lead the celebration, which will showcase enough community organizations and LGBTQ individuals to make you feel the luck of the Irish, even if it’s from the comfort of your home. Visit Dublin Pride on Facebook to watch.

Barcelona is Spain’s second-largest city, but when it comes to celebrating Pride, this Meditteranean metropole takes first place. Even though Pride! Barcelona won’t be heading to the city’s cobblestoned streets and sandy beaches in 2020, it will still create a safe space for LGBTQ locals this week by taking over the television station Betevé with queer-centric programming. The content will be visible worldwide, ensuring this Catalonian kingdom retains its title as Espana’s number-one LGBTQ hotspot. Check the schedule for a full list of events. 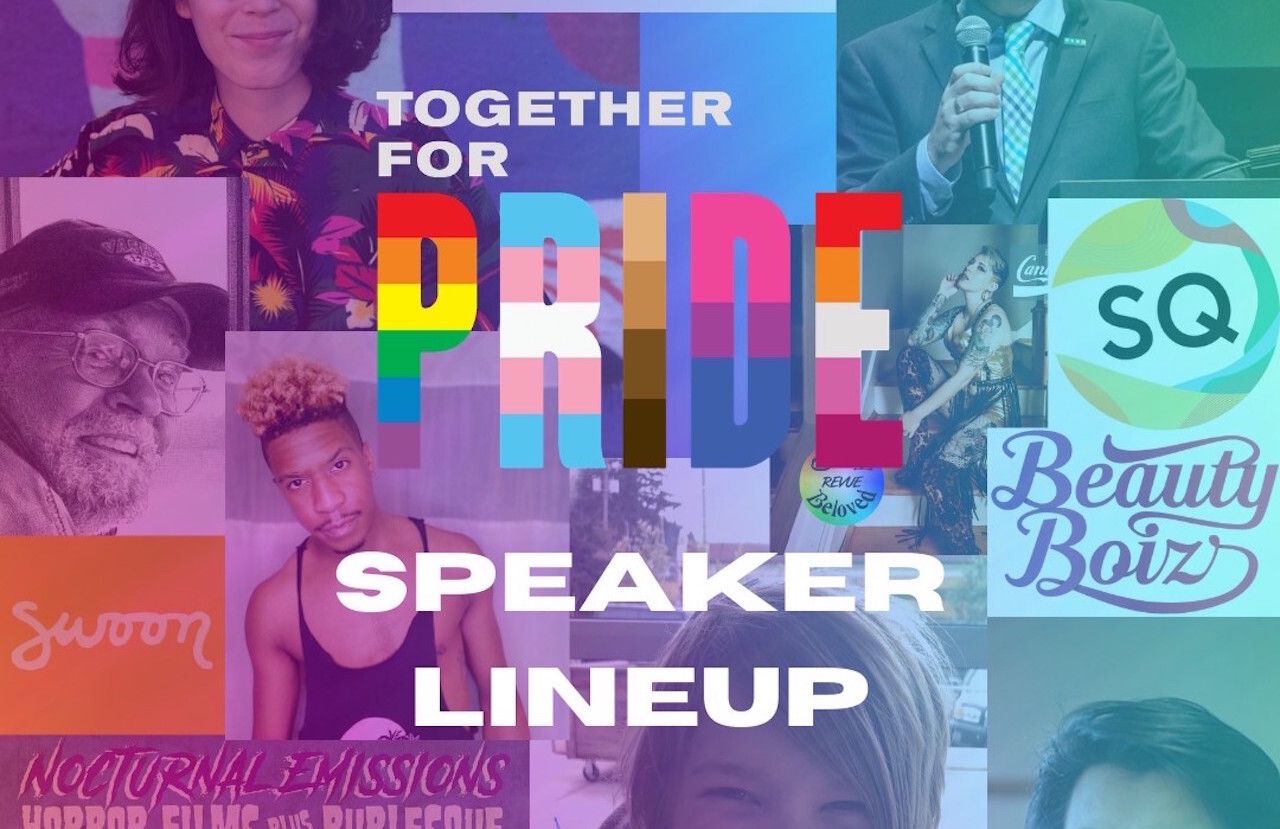 Famous for its quirky drag scene (we’re looking at you, Dina Martina) and welcoming queer spaces (shout out to Queer/Bar), Seattle is one of the most outwardly progressive places for LGBTQ residents in the US. It comes as no surprise, then, that the city’s virtual Pride initiative offers tons of opportunities for locals to connect. For young folx, try Lambert House’s Pink Prom and Pride on June 27. Hosted via Minecraft Java Edition and Discord, the event gives people between 13 and 22 a safe, sober space to play games, compete in building competitions, and celebrate Pride with like-minded individuals.

Tinsel town’s Pride festivities are heading to the TV screen on June 27 for the first time in history. The three-hour event will air on the city’s local ABC7 station from 8:00-11:00 PM PT; you can also watch it on ABC7.com and Hulu. Expect to see interviews and stories celebrating LA’s role in the LGBTQ rights movement, along with performances and appearances by Alex Newell, Trixie Mattel, Leslie Jordan, MJ Rodriguez, Pete Buttigieg, Jane Fonda, Laverne Cox, and many more. Reverend Troy Perry, the founder of the LGBTQ-inclusive Metropolitan Community Church, serves as this year’s Community Grand Marshal.

LGBTQ TravelHow to celebrate Pride in NYC in 2020
Tagged
LGBTQ Travel COVID-19 Events
What did you think of this story?
Meh
Good
Awesome

The 7 most fabulous vacation destinations for LGBTQ travelers in 2022

Every destination in the world currently open to US travelers

Everything you need to know about Europe’s Digital COVID Certificate

Every type of mask you’re allowed to wear while flying

The EU removed the United States from its safe travel list. Here’s what to expect.