Towering palm trees welcome you to the Cocora Valley, in Salento, Colombia. The slim trees pepper the verdant, wild landscape, surrounded on all sides by green mountains. Entering this Colombian coffee region hotspot feels as though you’re being welcomed by kind giants to an enchanted land full of rich history and overflowing with splendor. It’s a magical valley, making it an ideal backdrop for Disney’s new animated feature Encanto.

Cocora Valley is home to the world’s tallest palm trees and some of the most impressive mountain-based views in all of Latin America. It’s no wonder Disney chose it as the setting of the film. However, exploring the real-life Colombian valley might just serve to be more enchanting than viewing the film itself. Here’s what to know about real-life enchanted Colombia behind the film and how you can experience the lush beauty of Cocora Valley in person. 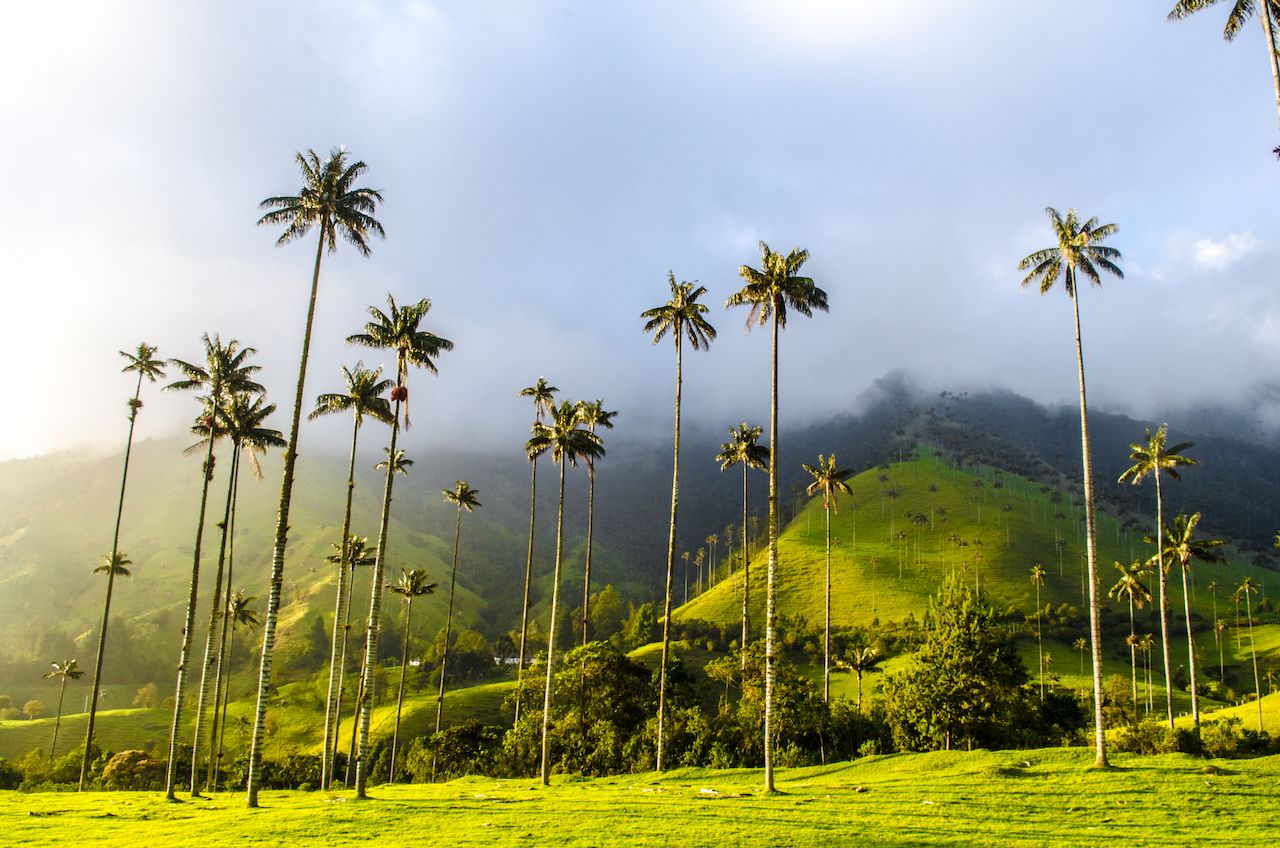 Encanto is scheduled to be theatrically released on November 24, 2021. In the film’s first teaser trailer, a butterfly guides you toward a colorful home and into a mystical world that looks conspicuously similar to the Cocora Valley — complete with those skinny, towering palm trees the valley is famous for. The trailer also features the locally-iconic cumbia song “Colombia Tierra Querida.”

While Disney hasn’t confirmed yet that the film is set specifically in the Cocora Valley, the colossal palm trees and lush landscape suggest that it’s, at least in part, inspired by the country’s coffee region (made up of the departments of Risaralda, Caldas, and Quindío, all of which are part of the UNESCO World Heritage coffee cultural landscape). Currently, we know that the animated feature film will be a musical directed by Byron Howard and Jared Bush of Zootopia fame with music by Lin-Manuel Miranda. 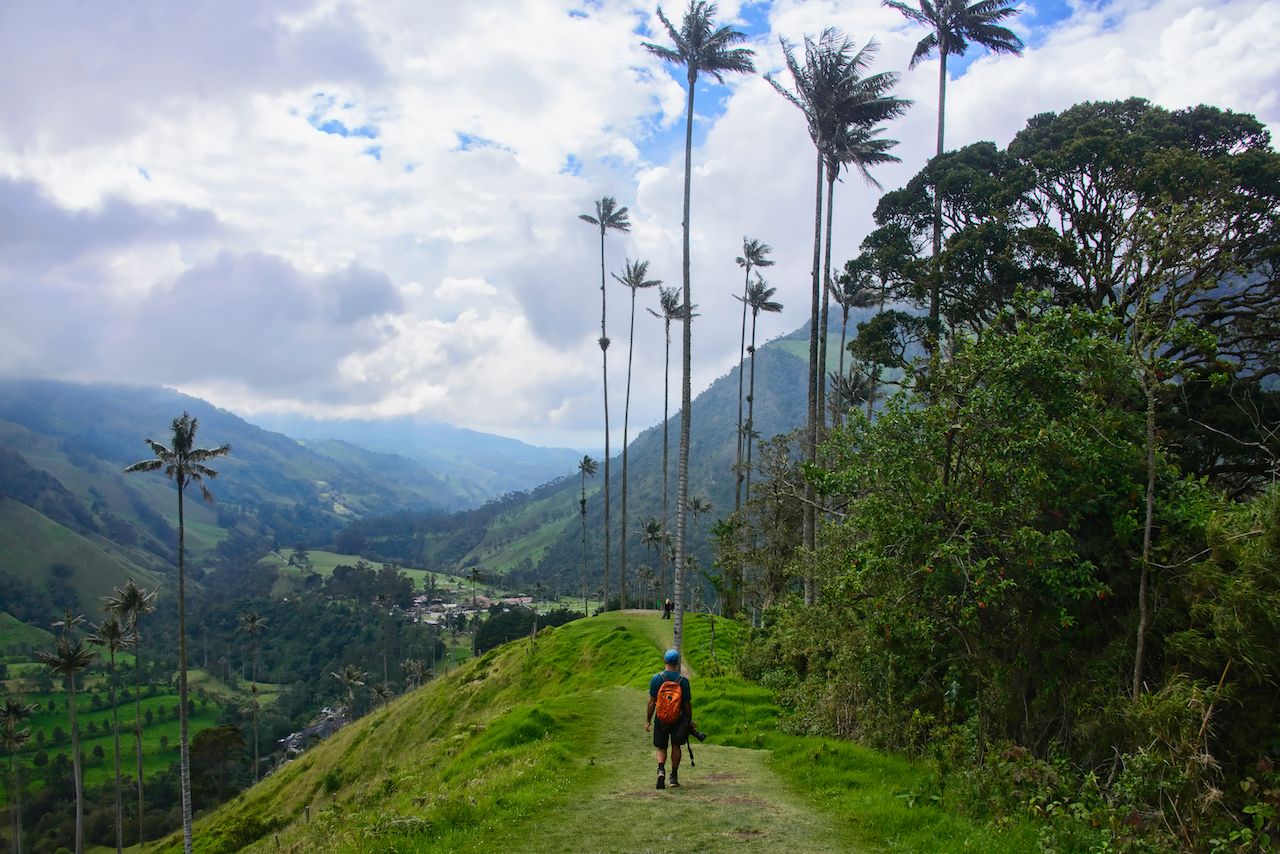 Years ago, Colombia’s government invested in a marketing campaign which advertised the idea that “Colombia is magical realism.” The campaign seemed to have worked, with foreign visitors to Colombia growing 300 percent between 2006 and 2019. Encanto promises to help promote this idea of the enchanted Colombian landscape as it becomes one of the hottest tourist destinations in Latin America.

Tourists and locals alike are treated to the different flavors of Colombia’s captivating magic when they visit different cities such as Cartagena, Guatapé, and Villa de Leyva, but few rival the scenery one encounters in the coffee region. It’s home to some of the country’s (and perhaps the world’s) friendliest locals, delicious coffee, mouth-watering eats, música guasca, and, of course, the Cocora Valley, among other natural wonders.

Salento is the gateway to the Cocora Valley, and one of the hottest stops on any backpacker route through Colombia, making it a must-visit for at least a night or two while you’re in the area. The town is tiny, small enough to walk around in about half an hour, but caters to tourists with hostels, cafes, adventure tours, and modern restaurants. To get to Salento, you have three main options.

Getting to Salento from Armenia 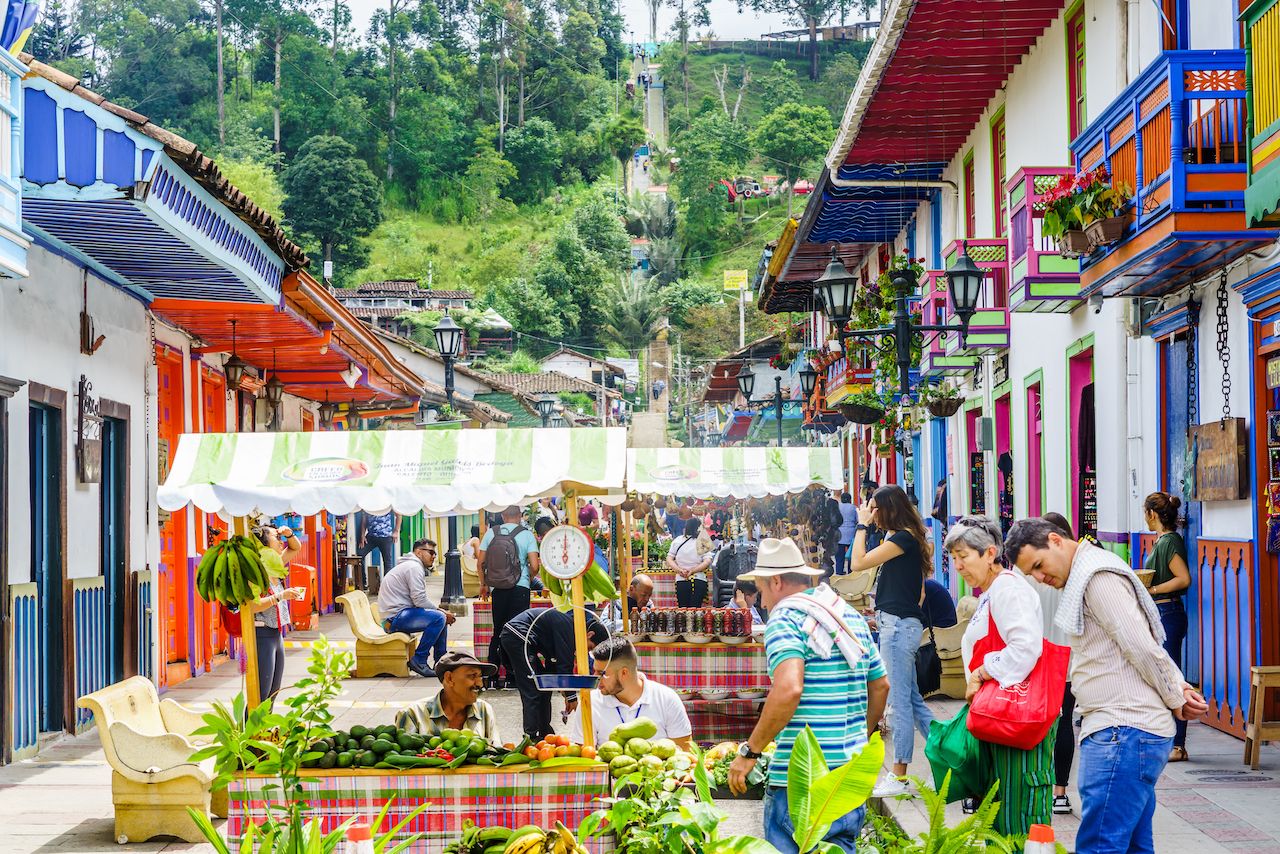 To visit the Cocora Valley, most travelers must first arrive in one of the coffee region’s three major cities, Armenia (capital of Quindío), Pereira (capital of Risaralda), or Manizales (capital of Caldas). Each of these cities offers buses headed straight to Salento, but the journey from Armenia to Salento is the shortest at around 45 minutes. Once you arrive at the Armenia bus station, you’ll be looking for the Cootracir bus to Salento. A one-way ticket should cost about 5,000 Colombian pesos, or around $1.50. Salento is 15 miles north of Armenia and just a short Jeep ride away from the Cocora Valley.

Pereira is bigger than Armenia but farther away from Salento. If you’re traveling to Salento from Pereira, head to the bus terminal where you’ll find ticket windows with massive signs on them. Look for Expreso Alcala or any Salento sign. One-way tickets should cost no more than 10,000 pesos, or just under $3. While Colombian buses are known to arrive and depart late, buses leave for Salento about every half-hour.

Manizales is the coffee region’s college town and well worth checking out if you have the time. The city’s cable system is similar to the one you’ll find in Medellín and makes for a great vantage point for traveling photographers. It is, however, the furthest away from Salento of the three capital coffee region cities.

Getting to the Cocora Valley from Salento 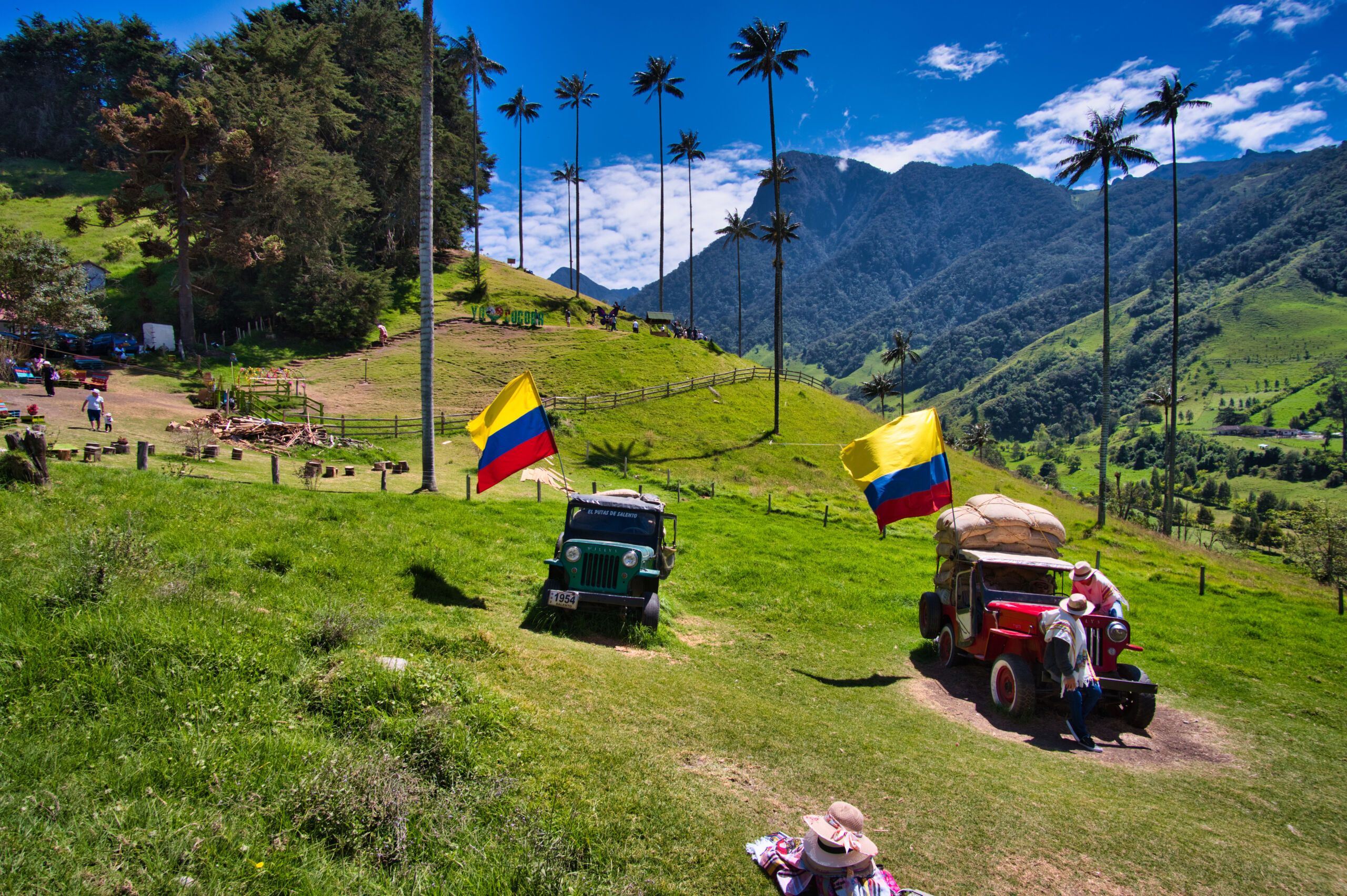 You’ve made it to Salento. Now, it’s time for the main event. Jeep Willys heading straight for the Cocora Valley leave from the town’s Plaza Bolivar Park throughout the day at 6:10 AM, 7:30 AM, 9:00 AM, and 10:00 AM. A one-way ride should cost around 3,500 pesos, which is currently just over $1. If you’re looking for Encanto-esque views as you enter the valley, ask to stand on the back of the Jeep and let the mountains tower over you as you ride with the wind blowing through your hair.

What to do in Salento and the Cocora Valley 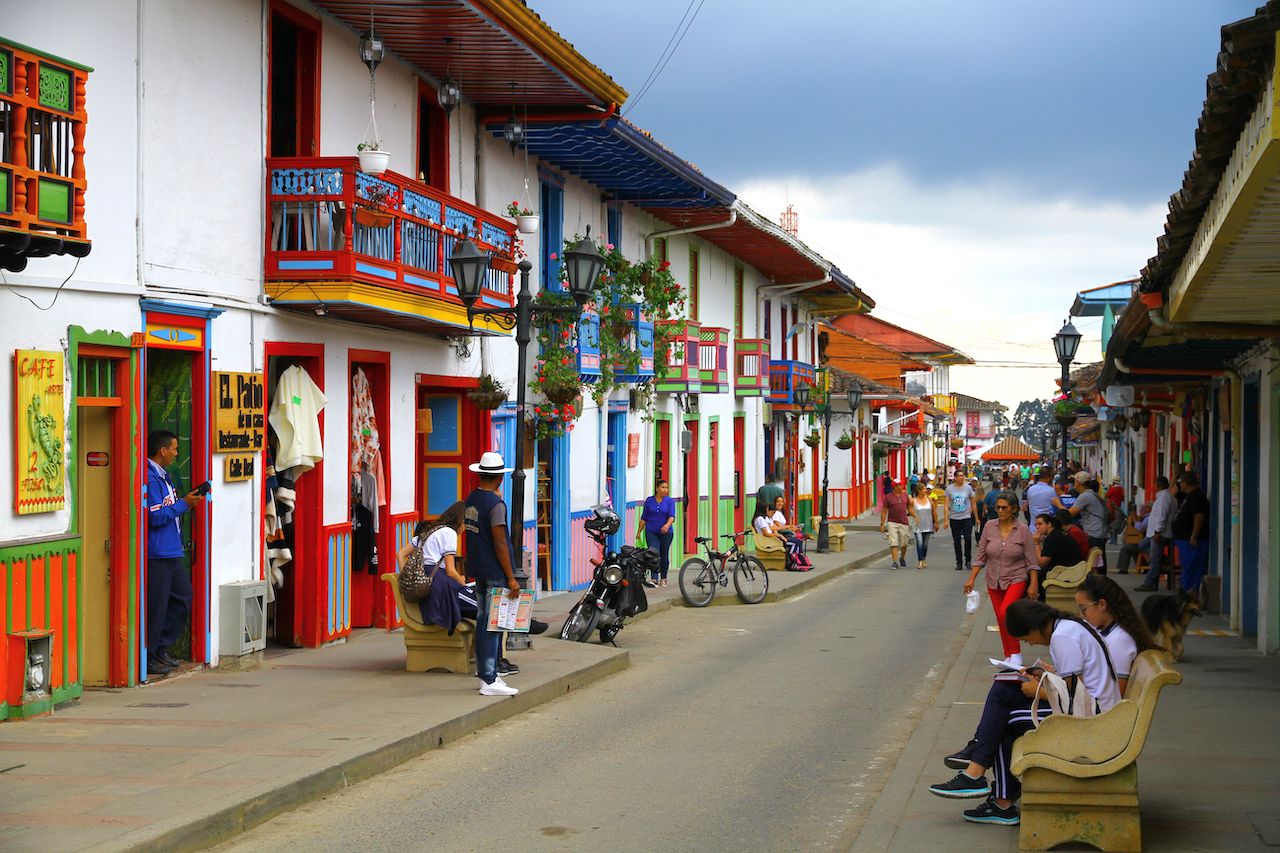 The lush landscape of the Cocora Valley gives off serious Jurassic Park vibes. Instead of walking among dinosaurs, however, you’re walking among soaring palm trees. A journey deeper into the valley leads you into a landscape featuring cascading waterfalls, streams, and lush plant life.

Active travelers should, without a doubt, be prepared to do the full Cocora Valley hike. It’s the only way to truly witness the wonders hidden inside the landscape, and it’s the option with the most rewarding views of the magical realism that Encanto evokes. The hike ends high up in a real-life cloud forest as you peer down onto the valley below. You’ll be almost eye-to-eye with the palm trees, immersed in a storybook setting that looks as if you’ve been dropped straight into the Encanto trailer.

After a hike through the valley, which takes about three to five hours depending on your pace, you can take a Jeep Willy back to the town of Salento (the last one leaves at 5:00 PM, so plan ahead) and delight your taste buds by trying trucha, the local trout specialty that’s cooked to perfection straight from the stream. Finish it all off with a cup of fresh coffee (ask for a “pintadito” if you want coffee with milk or order a “tinto” for black coffee) or try the local hot chocolate (which is served with a slice of cheese you plop into the cup).

While the town is filled with plenty of options for hungry travelers, Brunch is one of the best restaurants in Salento for those just finishing the rewarding yet arduous hike. There, you’ll find everything from veggie burgers to nacho plates the size of your head. Save room for its world-famous peanut butter brownies and leave a note on the art-covered wall for other travelers.

You’ll walk out of Brunch almost too full to move, so head over to Café Jesús Martín for the best coffee in town. If you’re looking for dinner plans, Donde Laurita offers a unique paisa-themed experience unlike anything else in Salento. Before you leave, be sure to book a spot for the highly-recommended coffee farm tour at Finca El Ocaso (a must for any coffee enthusiast).

This highly anticipated film will surely leave you wanting to experience all that Colombia has to offer firsthand. From its lush landscapes to its vibrant culture and cuisine, this magical country has plenty of adventure to offer. Colombia’s enchanting Cocora Valley waits to be discovered by travelers looking to explore what happens when you blur the lines between magic and reality.

HikingFor the Perfect Day of Hiking and Colombian Coffee, Head To Jardín
Tagged
Movies National Parks Colombia
What did you think of this story?
Meh
Good
Awesome