When someone recommends a trip to a place literally called “bad lands to travel across,” it’s understandable to be skeptical. Geographically, “badlands” isn’t a misnomer. The badlands in parts of North and South Dakota were nearly impassable in the 18th century thanks to the rugged terrain, but lucky for us, we don’t rely on horses for our family vacations anymore. And the very geography that made the badlands so troublesome for pioneers and Native Americans is exactly what makes it worth visiting today.

“Badlands” is a term used to describe a landscape filled with distinct and beautiful geological features, like buttes, ravines, canyons, and mesas shaped by erodible lands. The slippery clay soil and steep canyons made the land incredibly difficult to traverse. This proved challenging for Native Americans and French pioneers in the 18th and 19th centuries — hence the name, which has a similar theme in a number of different languages.

“The Lakota (Sioux) were pushed westward by American expansion,” Mike Jensen, outdoor promotions manager for North Dakota Tourism, tells Matador Network. “Settlement and their way of life revolved around the North American Bison. The people were often led to and were made to pursue the bison herds into and across the badlands — the area called mako sica, meaning ‘bad or eroded lands.’ French fur traders, who were also prominent in the area in the 1700 and 1800s, called the area, ‘les mauvaises terres à traverser’ (bad lands to travel across).”

Badlands are formed by thousands of years of rock and mineral deposits being eroded by wind and water. In the Dakotas, the badlands are hundreds of thousands of years old, and the Little Missouri River and its surrounding valleys are the source of erosion. Where boulders once sat thousands of years ago, now we see mushroom-like “hoodoos” — pillars of sandstone holding up a cap of hard rock — and other geological elements that have formed over time.

Why you should visit the North Dakota badlands 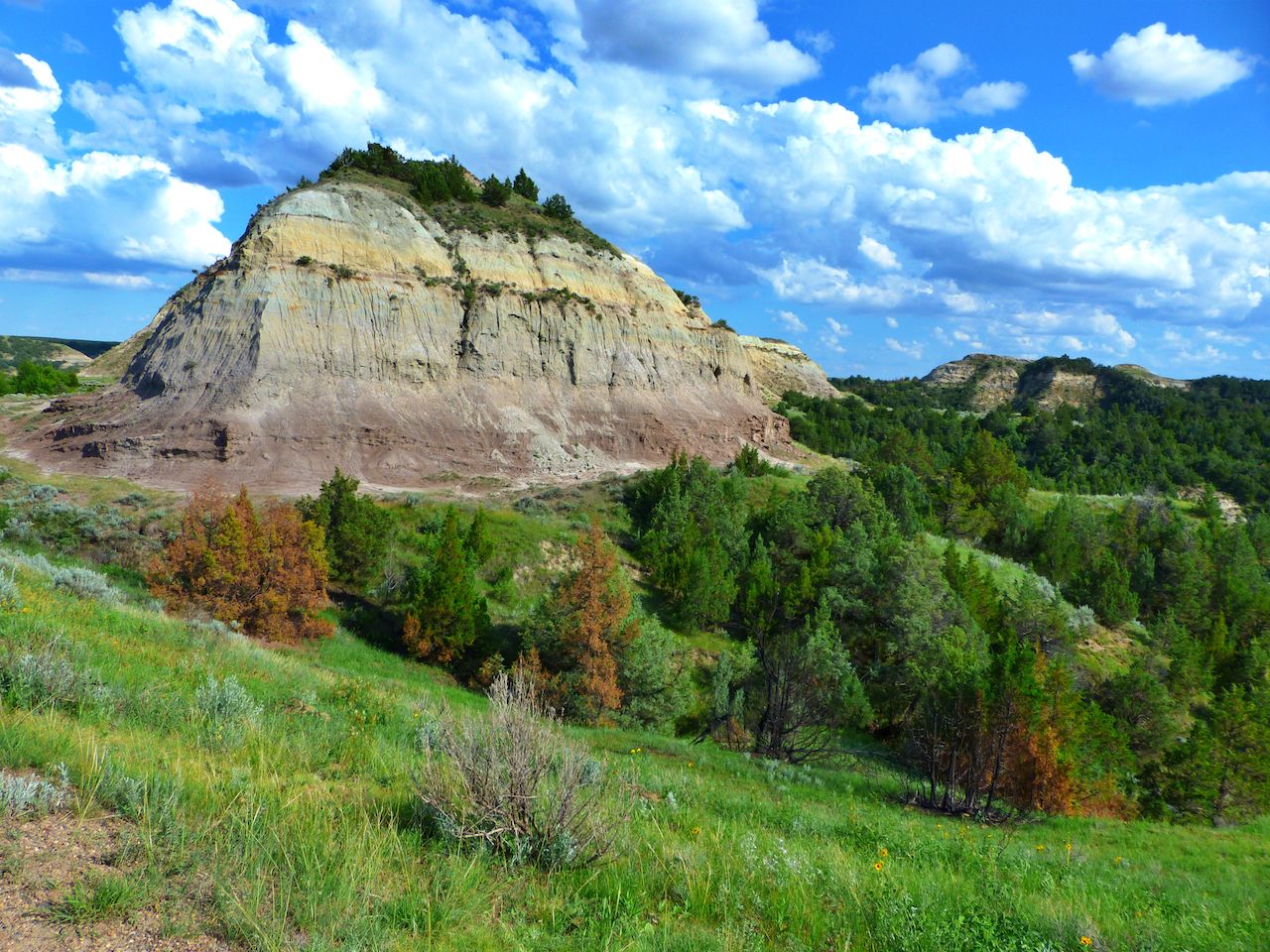 It’s important to note that North Dakota doesn’t have a monopoly on badlands. Similar landscapes are found across the western United States, though the badlands in North Dakota and South Dakota’s Badlands National Park are undoubtedly the most well-known. What makes North Dakota’s landscape unique is its abundance of scoria rock — a red-orange terra cotta-like rock baked by underground burning coal veins. These veins, a common badlands feature, are exposed layers of coal several feet underground, and had been smoldering when first discovered by early settlers.

North Dakota’s many exposed coal veins have caught fire over the years from lightning and wildfires, baking the clay into the pottery-like rock formations we see today. The badlands here also provide natural cover and habitat for thousands of plant and animal species in the area, making it a prime destination for viewing wildlife like bison, bighorn sheep, prairie dogs, and several bird species. 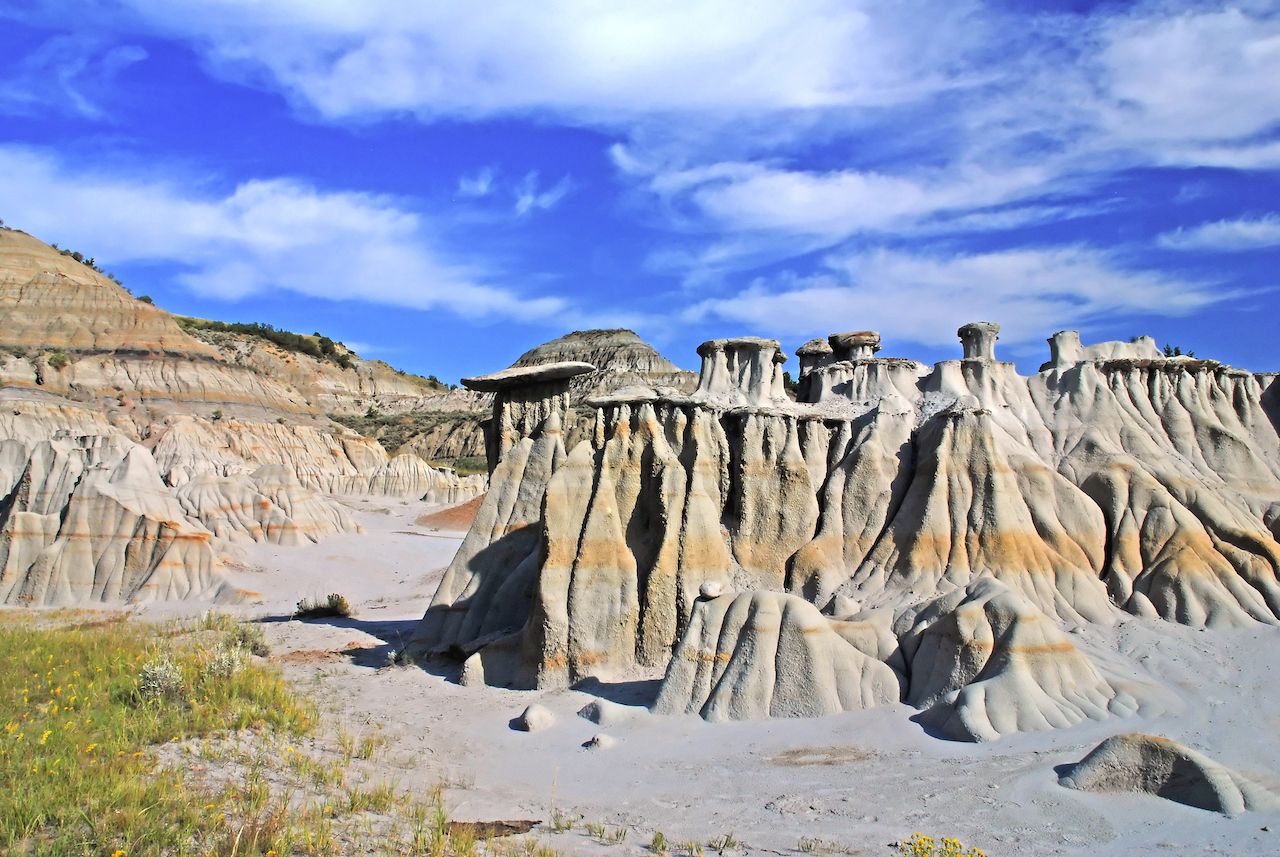 Fifteen miles from the small town of Amidon, the Burning Coal Vein is one of the coolest landscapes in the North Dakota badlands. First ignited by lightning or a prairie fire, this burning vein of coal several feet below the ground was first discovered by the area’s settlers in the 1880s. The vein continued burning and smoldering until the late 20th century, and visitors could even feel the heat from the cracks in the ground. The vein is no longer active, but it’s left an indelible mark on the landscape. Now part of the Little Missouri National Grasslands natural area, you can view it on the Coal Vein Nature Trail, which takes you on an educational tour of the rock layers and the 60-million-year-old history of the area.

Badlands aren’t exactly known for trees, but the Coal Vein Nature Trail has a unique feature: red Rocky Mountain cedar trees growing in columns along the hillsides. Their peculiar shape is thought to be due to gases released from the burning coal that causes the trees to grow abnormally, though it’s not known for certain. Growing in clusters along the hillside, Rocky Mountain cedar is a rare example of lush and verdant growth in an otherwise barren landscape.

There’s also a small campground adjacent to the area with around ten campsites, including picnic tables, fire rings, and parking.

How to explore the badlands 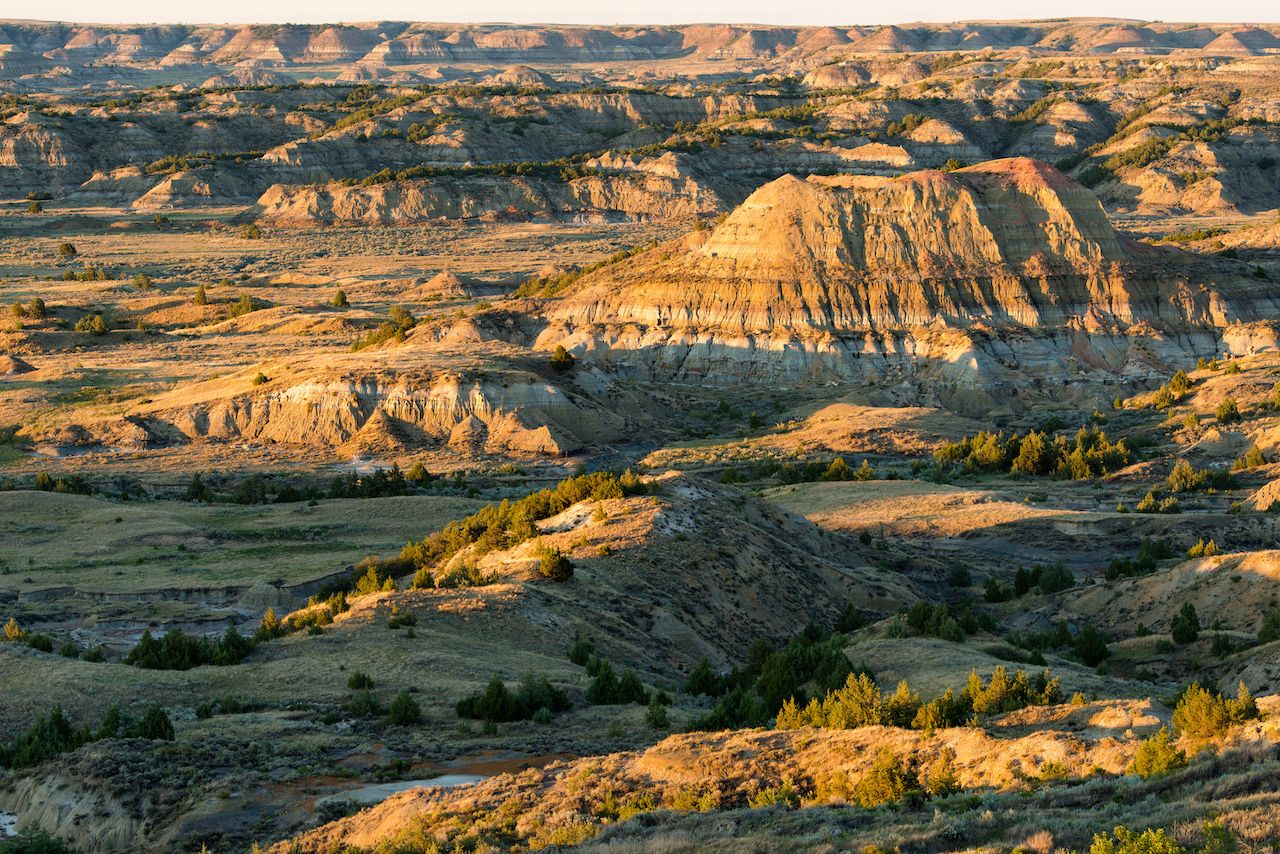 In western North Dakota, Little Missouri State Park has over 45 miles of trails running through the badlands. The trails are perfect for hiking and horseback riding, especially the state park loop. This five-mile loop trail is moderately difficult, and features some of the area’s most beautiful wildflowers. The trail really takes you into the heart of the rugged badlands, requiring some technical ability and even bushwhacking in the overgrowth. The I trail, starting at the campground, is also perfect for hikers. It curls around rock formations and along ridges, offering some of the best views of the badlands in the entire area.

To get the full effect of the badlands, Theodore Roosevelt National Park is another must-visit park in North Dakota. While guided hikes and full-moon walks are offered by the park, there’s plenty to explore on your own — particularly when it comes to wildlife. In the South Unit of the park, you’ll find plenty of mule, buson, deer, prairie dogs, and horses without even leaving your car. If you’re lucky, you might even spot some pronghorn, bald and golden eagles, and elk. Also in the South Unit is the Painted Canyon Overlook, a view exactly as impressive as the name suggests. The park’s North Unit, however, has the most stunning scenery. Take the 14-mile scenic drive through the bottom of the badlands, then up out of the canyon to River Bend Overlook — the best view in the park.

The North Unit also has some incredible backcountry trails, including the Buckhorn, Caprock Coulee, and Achenbach trails. When backcountry hiking, you’ll probably want to spend the night. There’s two campgrounds and one group site for camping with horses. Camping in the backcountry requires a free permit, while the North Unit’s Juniper Campground is accessible on a first-come, first-served basis.

While you’re in the park, make sure to visit Elkhorn Ranch, also known as the “cradle of conservation.” According to Jensen, this is “the very place where a young Theodore Roosevelt traveled to experience the strenuous life and mend a broken heart. It is the very spot he looked out upon his Dakota cattle ranch and formed his strong belief that there are places in the country that needed to be set aside for future generations. Very few visitors make the 90 minute drive to the Elkhorn unit of the park between the North Unit and South Unit.”

Teddy Roosevelt chose Elkhorn Ranch to be his “home ranch” after the deaths of his wife and mother. Only the stone foundations of the cabin remain, but you can still visit educational exhibits featuring passages written by Roosevelt about his experiences at the ranch. There are no marked trails, visitor centers, or facilities, but it’s one of the best places in the park for pure peace and quiet.

Bodies of water in the badlands 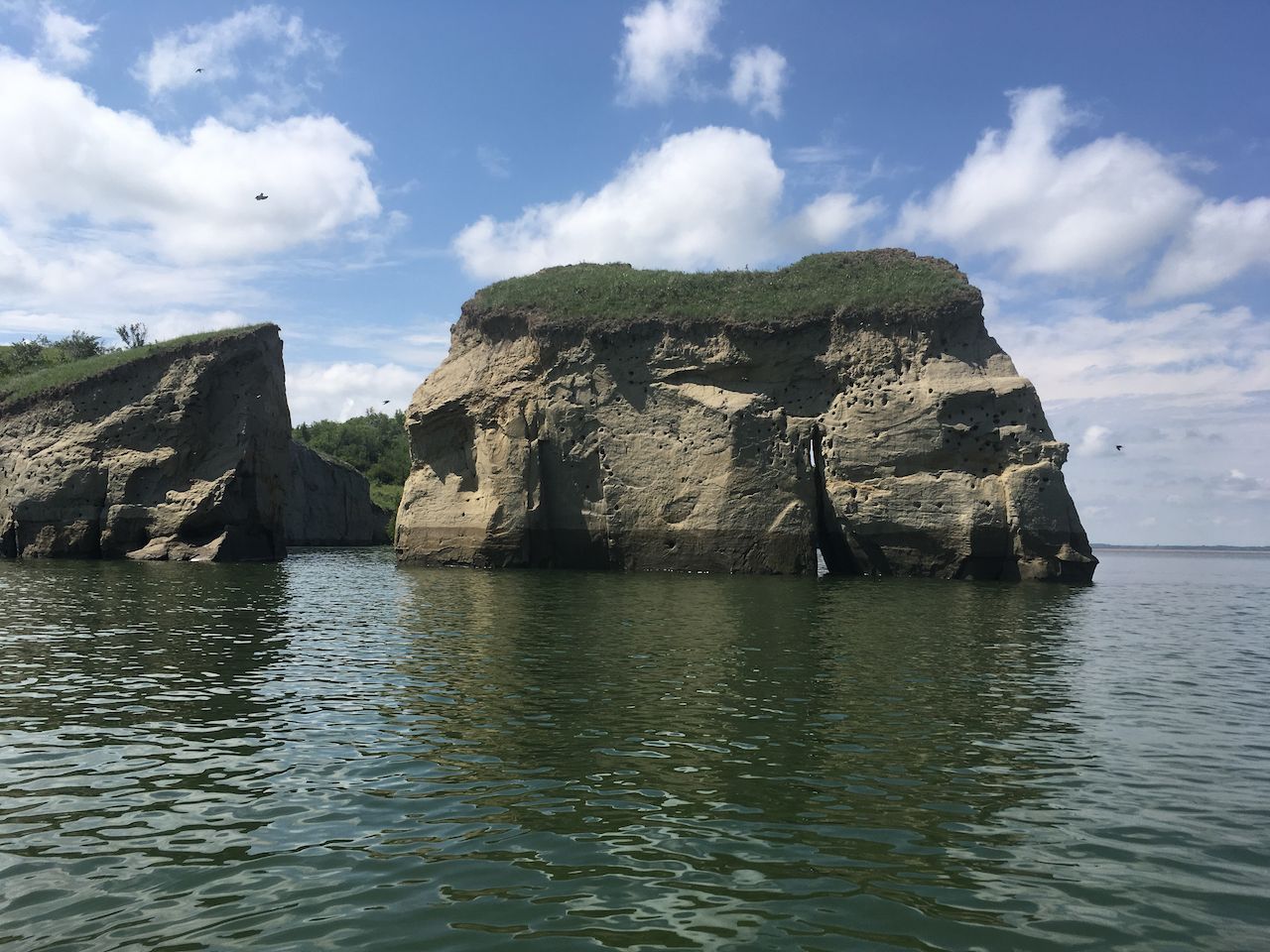 Lakes might be the last geographical element that comes to mind when you think of badlands. “Visitors don’t often connect our prairie reservoir, Lake Sakakawea, with the badlands,” Jensen says. “But they should.” Surrounded by miles of lakeshore with views of the badlands, the Lake Sakakawea State Park has opportunities for camping under the trees, hiking the adjacent trails, taking a boat out on the water, or simply relaxing on the beach.

One of the area’s most popular trails is the North Country National Scenic Trail, which stretches 4,600 miles over seven states from North Dakota to Vermont. Lake Sakakawea State Park is the trail’s westerrn terminus. It’s fine if you’re not quite ready for a 4,600-mile trek. You can do a much shorter hike beginning at the Visitor Center, which stretches just under two miles through the shortgrass prairie. There’s also the Shoreline Trail, which traverses the entire North-South length of the park, leading through scoria formations, petrified tree trunks, and coal veins. For the best views, check out the short Overlook Trail, leading from the Visitor Center toward the lake. At the overlook, you’ll have a view of the untouched prairie and the Garrison Dam.

Since the lake itself is particularly known for its fishing, even amateur fishermen are encouraged to bring their poles. It’s home to walleye, northern pike, and chinook salmon. Fishermen even have the convenience of a full-service marina and fish cleaning station to make their lake adventure even easier.

The more you explore the badlands, the more the “bad lands to travel” moniker starts sounding like a misnomer. Landscapes that once challenged the pioneers present a rugged adventure for the 21st century traveler. These days, a more appropriate name for the area might be “bad lands you shouldn’t skip on your travels.”

The 10 Biggest Lies the Guidebooks Tell You About North Dakota