It was round 7:00 PM in an open-air kitchen, surrounded by the dense jungles of Sri Lanka and the chirping of frogs, when I discovered the name of the dish in front of me: wambatu moju.

“Also, some say, pickled brinjals,” said Suchar, my chef and cooking class teacher for the evening.

Before him, Suchar had laid out a selection of knobby vegetables and fruits: tomatoes, green beans, pumpkin, ash bananas, beets, jackfruit, red onions, and, finally, eggplant. But when he’d asked me what I wanted to make that evening, I only had eyes for one: the shiny purple eggplant.

During my time in Sri Lanka, I’d become fond of the colorful curries. Sri Lankan curries are not what I’d expected. The flavors are fresh, spicy, and vegetable-forward, and they don’t include decadent creams or sauces. But there was one dish that stood out to me. I first ate wambatu moju as a side dish in a small ceramic bowl. On the first bite, my tongue burst with flavors that were at once meaty, sour, caramelized, and tingling with spice. But I had absolutely no idea what I was eating. The menu read “Sri Lankan curry 500rps,” and when I asked the restaurant owner what I was eating, he gave me an amiable shrug. I left with a full belly and a new mystery to solve.

The same pattern continued throughout my time in Sri Lanka — occasionally I would luck upon that familiar meaty, pickle-y mysterious side dish, but I couldn’t figure out what it was. It was only during the cooking class with Suchar on one of my final evenings in the country that I made the connection.

The origins of wambatu moju 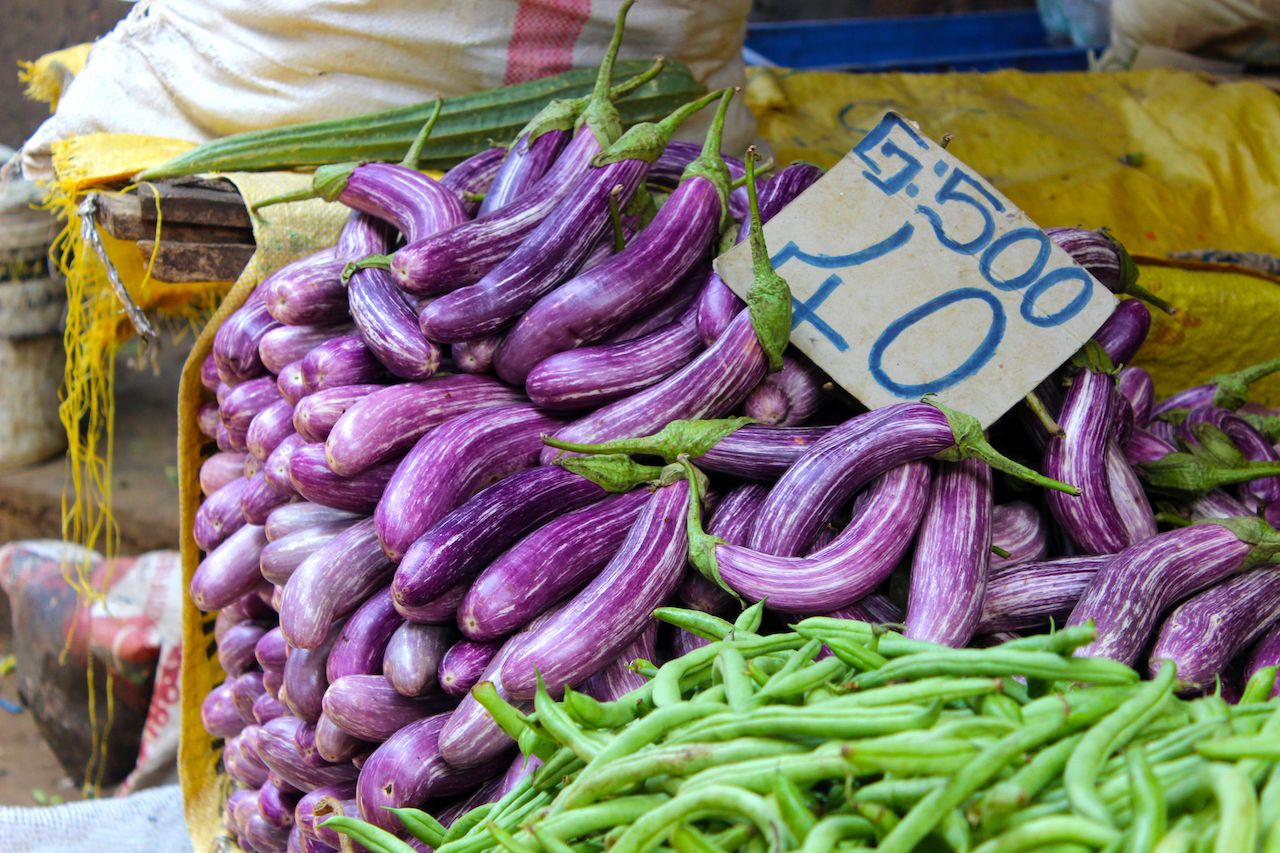 Eggplant is a member of the nightshade family, and its origins are thought to be in Southeast Asia — specifically India and Sri Lanka. Nowadays, eggplant thrives across Sri Lanka, its green stems persevering even when under direct sun or faced with a lack of rainfall. Unlike the deep, midnight-colored eggplants of the West, Sri Lanka’s eggplants are thinner, more magenta than violet, and have stripes of white down the shiny skins. Tasting one at a Sri Lankan dinner table that’s deep-fried and pickled, you will suddenly realize that this is how the oft-bland fruit was meant to taste.

Wambatu moju (the Sinhalese word for eggplant is wambatu), otherwise known as pickled eggplant, is a classic Sri Lankan dish made primarily from, you guessed it, thin slices of eggplant. The eggplant slices are fried and pickled alongside small pearl onions or shallots, chilis, and spices. The resulting dish is a combination of the eggplant’s meaty texture, the fiery spice of chili, the pickled tanginess of vinegar, and the caramelized sweetness from deep frying. Wambatu moju is a common dish on many Sri Lankan dinner tables and is also often served at weddings and special events.

The origins of the wambatu moju are a little harder to untangle, seemingly as complex as the dish’s flavors itself. There are dishes similar to wambatu moju around the world. From Sri Lanka’s neighboring subcontinent of India, in the Punjabi region, there’s baingan bharta. This is a similar dish made from thinly chopped eggplant and chilis although the acidity of vinegar is replaced with lime juice. There’s also melanzane sott’aceto, a pickled eggplant dish popular in Italy, where the spicy chili and ginger of wambatu moju is replaced with herbs like parsley and oregano.

Then there’s berinjela, the Portuguese word for eggplant, which is often served in Brazil in spicy, balsamic-vinegar-marinated strips. Both Brazil and Sri Lanka were Portuguese colonies in the early 1500s, and the three cultures’ cuisines have similarities. 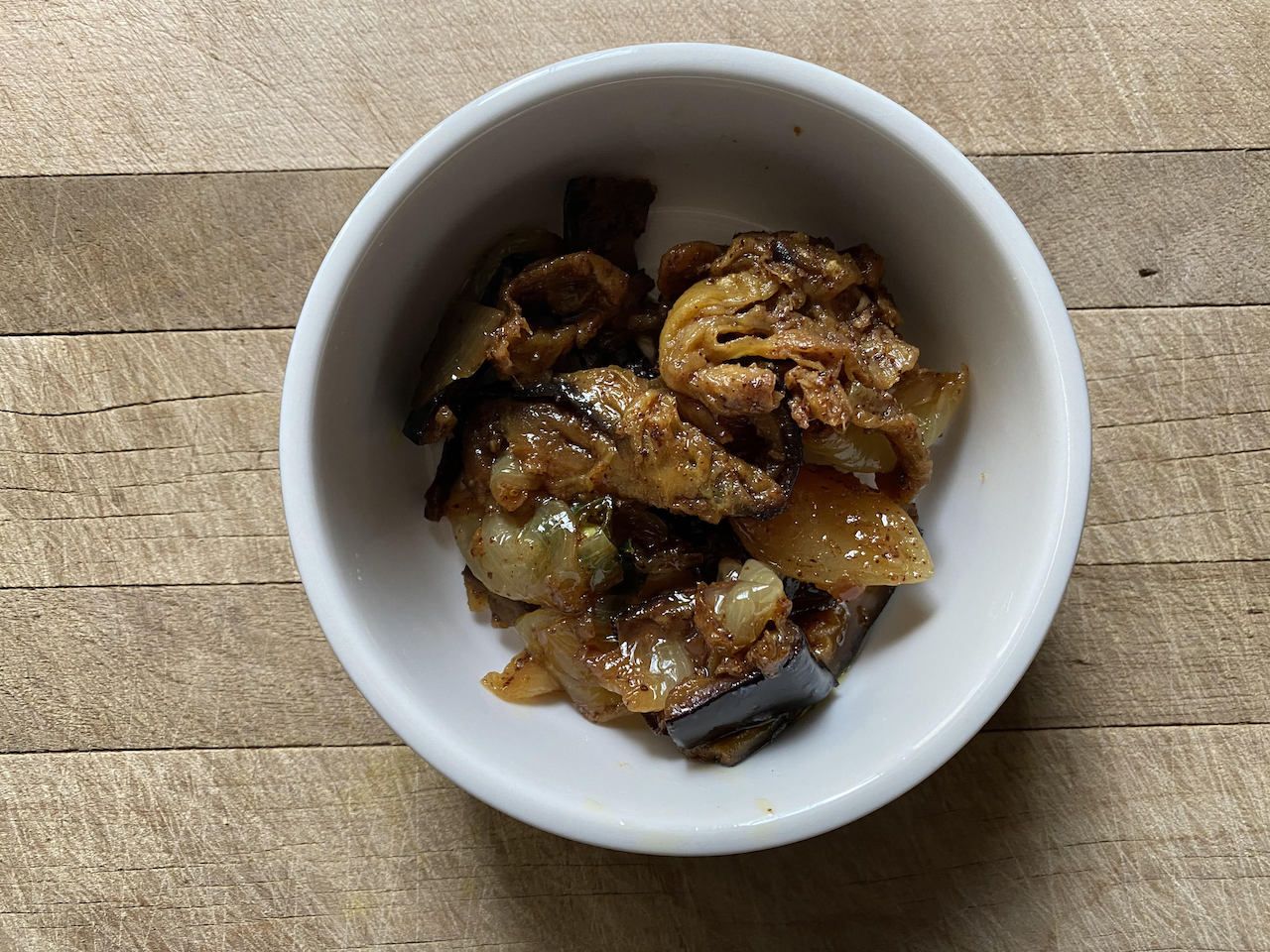 Weeks later, back at my home in Michigan, I had a craving for wambatu moju. I sliced the eggplant into thin strips, throwing out the black or pock-marked areas that Suchar had warned me about. I salted it and squeezed out the excess moisture before deep-frying the strips in oil until they turned a dark, sweet brown. Using the same oil, I fried shallots and jalapenos (“For you — two — for me, I use six,” Suchar’s words echoed in my memory). Separately, I mixed a sauce of pureed ginger, garlic, mustard powder, turmeric, salt, sugar, and vinegar. Then, I combined it all and waited, as I’d learned, for the flavors to meld, deepen, and pickle.

My homemade result — which took hours of slicing, frying, and squeezing — was subpar compared to the homemade wambatu moju I ate by the bowlful in Sri Lanka. But that won’t stop me from continuing to try and perfect my iteration of the classic Sri Lankan dish — at least, until I get a chance to return to the country that does it best.

DessertWatalappan Is the Sri Lankan Dessert That’s Impossible Not To Love
Tagged
Food + Drink Sri Lanka
What did you think of this story?
Meh
Good
Awesome