In Orlando, it’s hard to stand out from under the shadow of the mouse. But illuminating 16 stories of blue glass curves with rainbow LED lights is a start.

Such is how the Wave Hotel – which bills itself as the most technologically advanced new property in America – announces itself from the hypnotic swath of Central Florida sprawl that lines State Route 417. Just when you’re about to nod off from the endless parade of grassland and graded construction sites, this beacon of color and creativity tells you that what lies off the exit is going to be something different.

Different is exactly what Orlando – known to many as the home of Mickey Mouse, the Hulk Coaster, and not much else – is looking for. So this showcase of technology and technicolor in Lake Nona isn’t just an exciting new hotel, it’s a sign that Orlando is moving to deliver more for tourists than just the Magic Kingdom. Ignore for a moment that you’re sharing an area code with Cinderella’s Castle and you’ll realize that the Wave is, as far as hotels go, America’s greatest new confluence of art and technology.

A modern art treasure that feels like a home 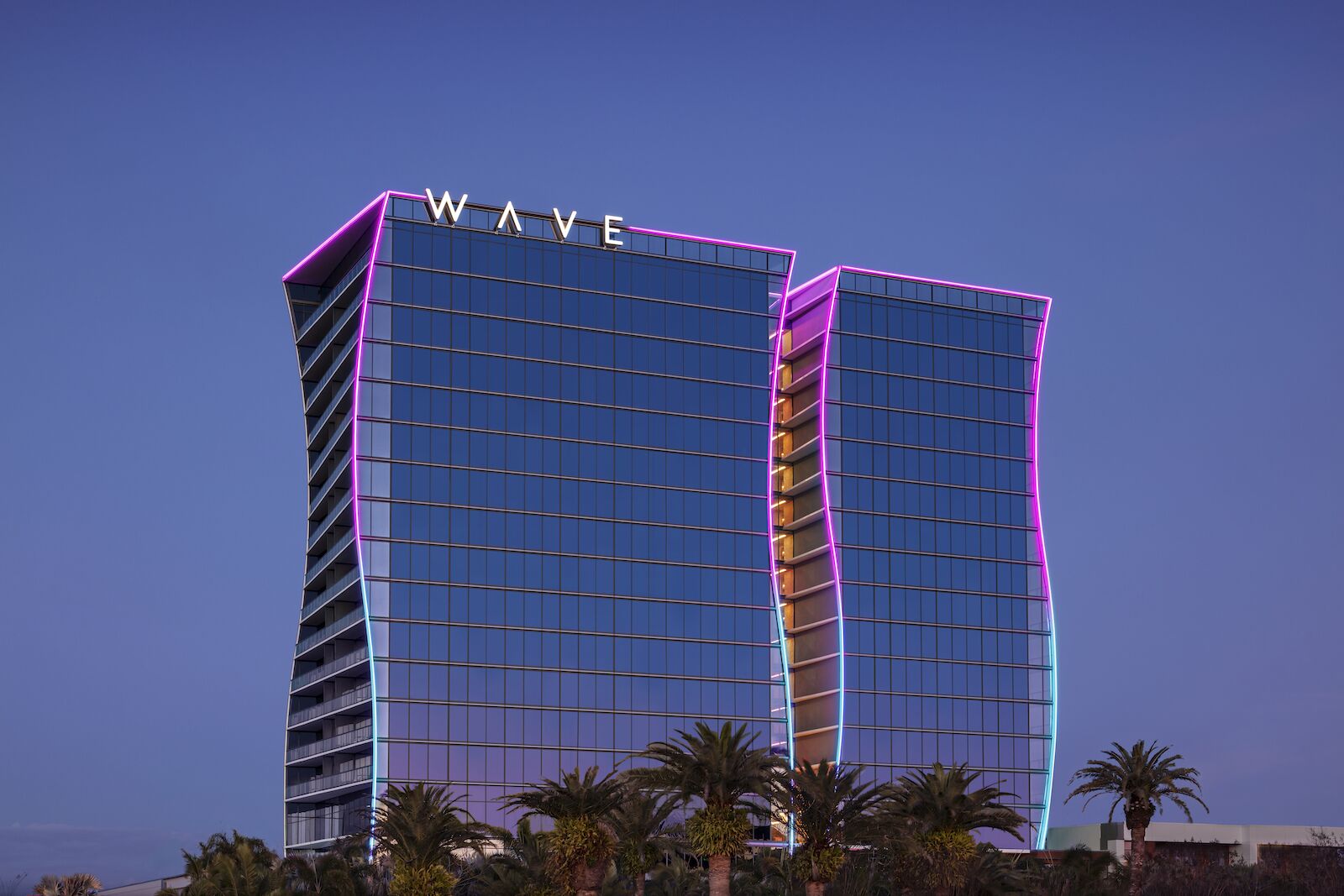 The Wave is the centerpiece of Lake Nona, a master-planned community near Orlando International Airport that’s home to the USTA Tennis Center, a 650-acre medical campus, and hundreds of “look how much house we can get in Florida” type of homes. It’s the brainchild of Tavistock Development, owned by billionaire and avid art collector Joe Lewis.
The community’s iconic centerpiece is the azure glass tower of the Wave, intended to be a high-tech, art-filled community center for both visitors and locals.

“This is the living room of Lake Nona,” says Juan Santos, Tavistock’s senior VP of innovation and brand experience. “Art was very much in the mind of Mr. Lewis. He loves the idea that every time you come to a place, there’s additional things you discover.” 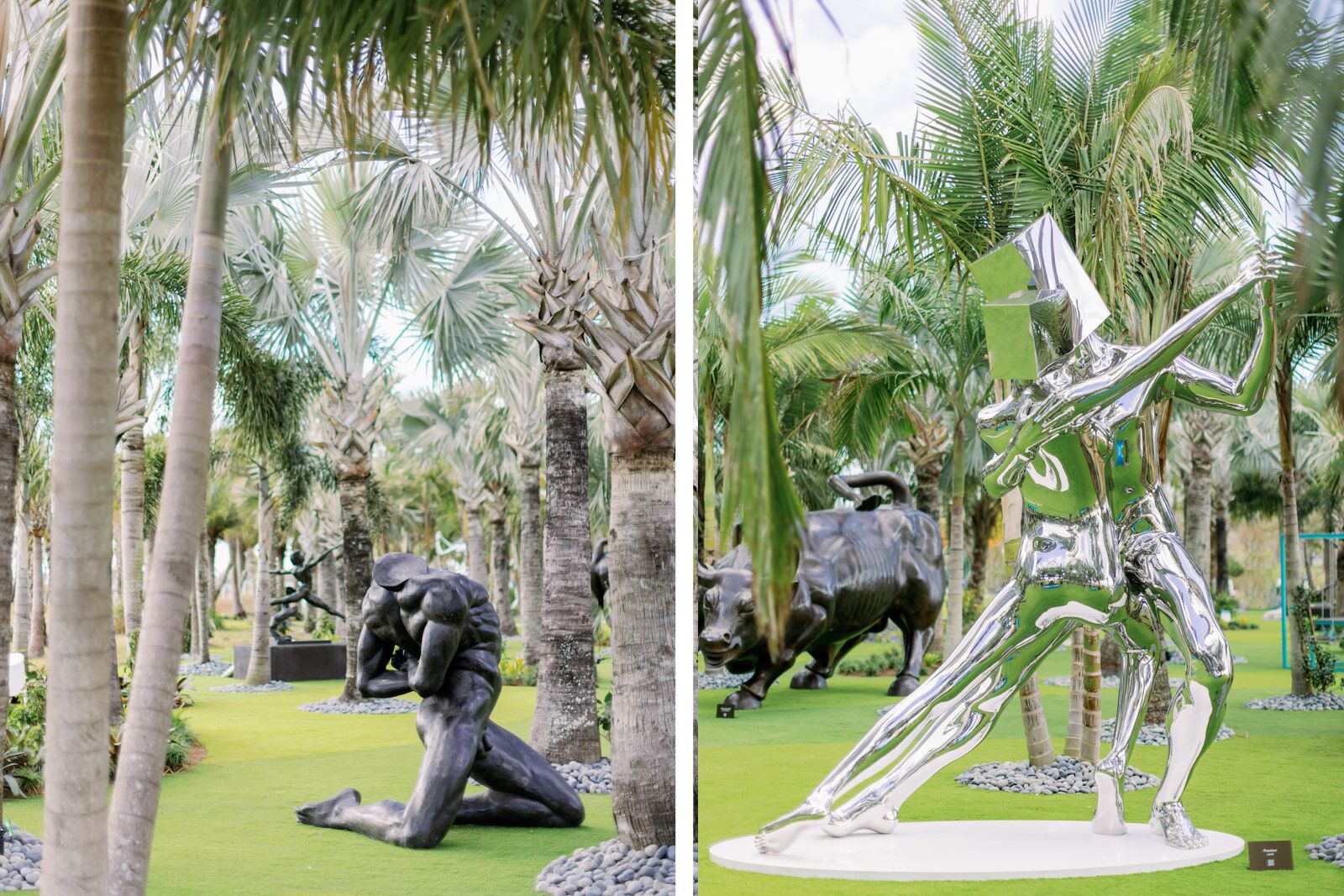 So he turned the hotel into a modern art showcase, where little enclaves of curiosity take guests from one art-filled experience to another, all within the confines of the hotel’s lobby and cocktail lounge.

“I wanted to give the feel of island hopping, or traveling Europe by rail,” says Amy Parry, who curated and designed the art in the Wave. “The niches needed to look cohesive, but every one is going to have its own identity.”
One niche has a brown leather couch set on its side, with a pig-shaped cocktail table accenting the hunting lodge motif. Another features a Vladimir Kagan-inspired couch with low slung pastel chairs and a long coffee table for a trip to mid century-modern America. Upstairs in the Haven restaurant, a chair shaped like a peacock’s feathers sits under a forest of artificial foliage for a foresty vibe.

The hotel is full of Instagrammable moments, sure, but none of it feels contrived. The Wave’s design doesn’t scream for attention, like the nearby theme resorts or seemingly every hotel that’s opened in Miami since the advent of the influencer. It exudes a quiet confidence that says, “Yeah, this stuff is pretty cool, but, really, it’s just our living room.”

Other hotels have art, but the Wave integrates it in ways that feel unintentional. If the 21C is an art museum with rooms upstairs, the Wave is the house of an eccentric relative with really good taste. 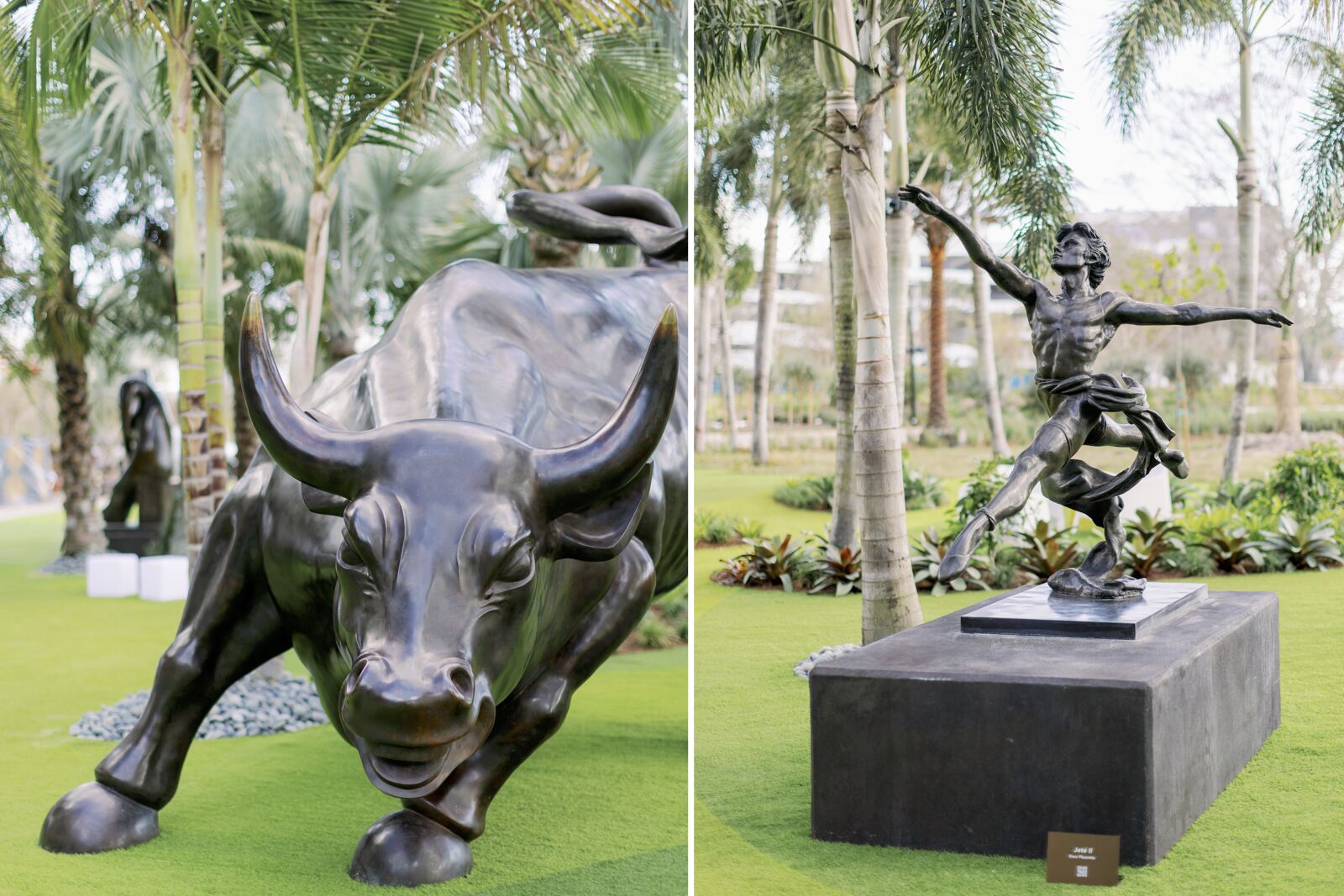 That house also includes a backyard full of chrome sculptures that seem to blend into the deep blue Florida sky. The Wave’s sculpture garden – which doubles as a public gathering place for Lake Nona and an events space for the hotel – also has one of Arturo di Modica’s “Charging Bull” statues. You may recognize its twin on Wall Street. The garden also gets a little less family-friendly with “Leda and the Swan,” depicting some hot deity-on-mortal action that’s far less upsetting than the literary inspiration.

Just when you think the art tour is over, you open an elevator and are greeted by a cloudy interpretation of Magritte’s “Son of Man,” with a floor inspired by MC Escher. The Magrelevator is one of three custom-designed elevator pods each with a completely different theme and music. 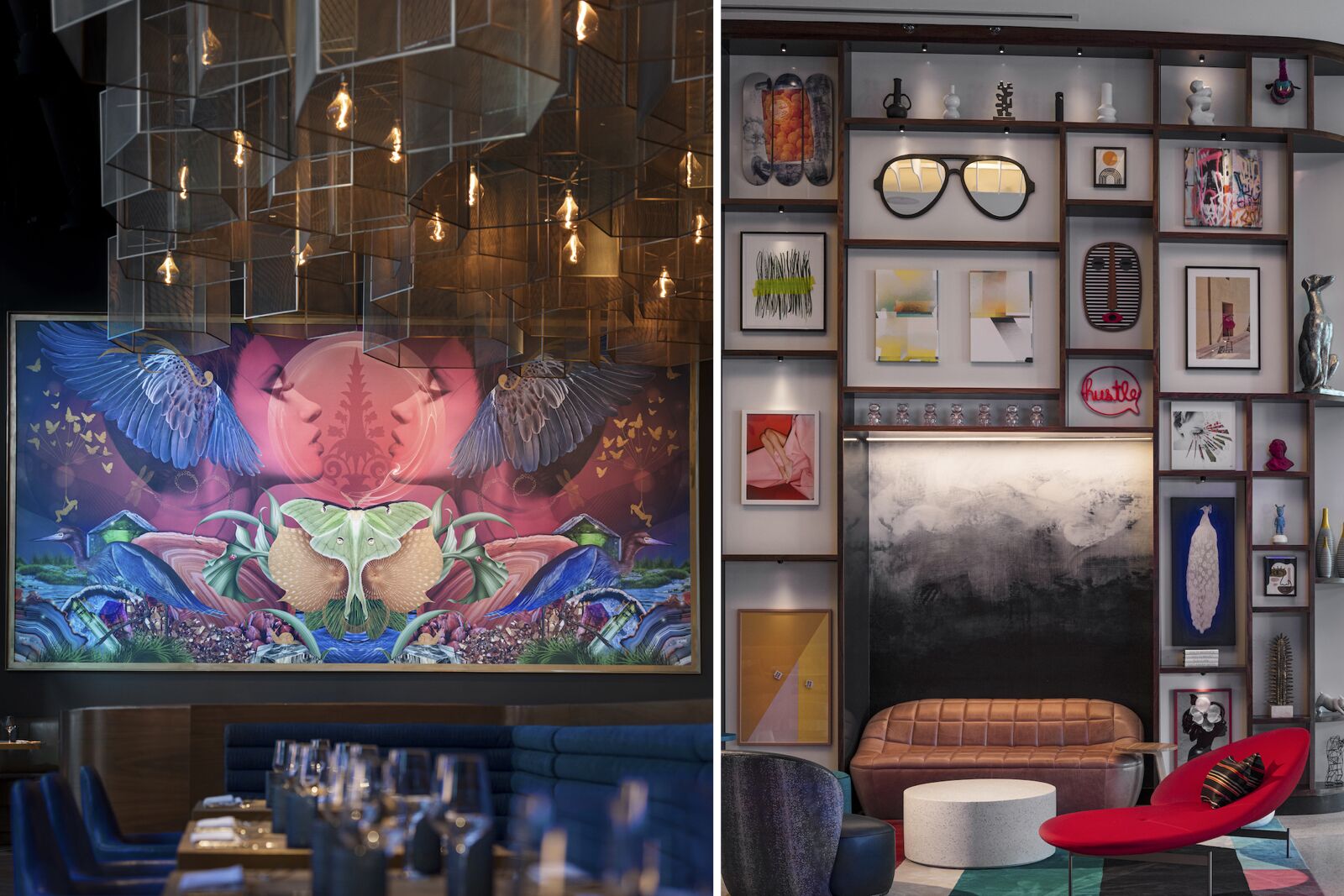 The ability to play different music in different elevators is but one of the technological advancements that makes the Wave so alluring.

The most obvious advents are the View Smart windows that make up the facade, which tint darker or lighter depending on how bright it is outside.

Another big tech point is the in-room app, which allows guests to sync their phone to the room and set things like lighting and temperature from anywhere. So if your evening is going well and you want to make a mood, you can dim the lights while eating dessert. If your afternoon pool session got you a little sun-kissed, you can make sure the room is ice cold upon your return.

Each room is also equipped with TOTO smart toilets, which has seats that raise to greet you and spray your bottom with warm water or cool air, if asked. A handful of wellness-themed suites have lights timed to your circadian rhythms, and offer beds that’ll tip your head up if they sense snoring.

While the gym is serviceable, guests also have access to the Lake Nona Performance Club, a 130,000-square-foot facility with a rock-climbing wall, golf simulator, group exercise galore, and endless interaction with locals.
Santos says the Wave boasts plenty of behind the scenes tech too, including pipe sensors that can detect calcification and water heaters that ensure the entire property is never lacking in warm water.

Creativity has full reign, from the living room to the restaurants 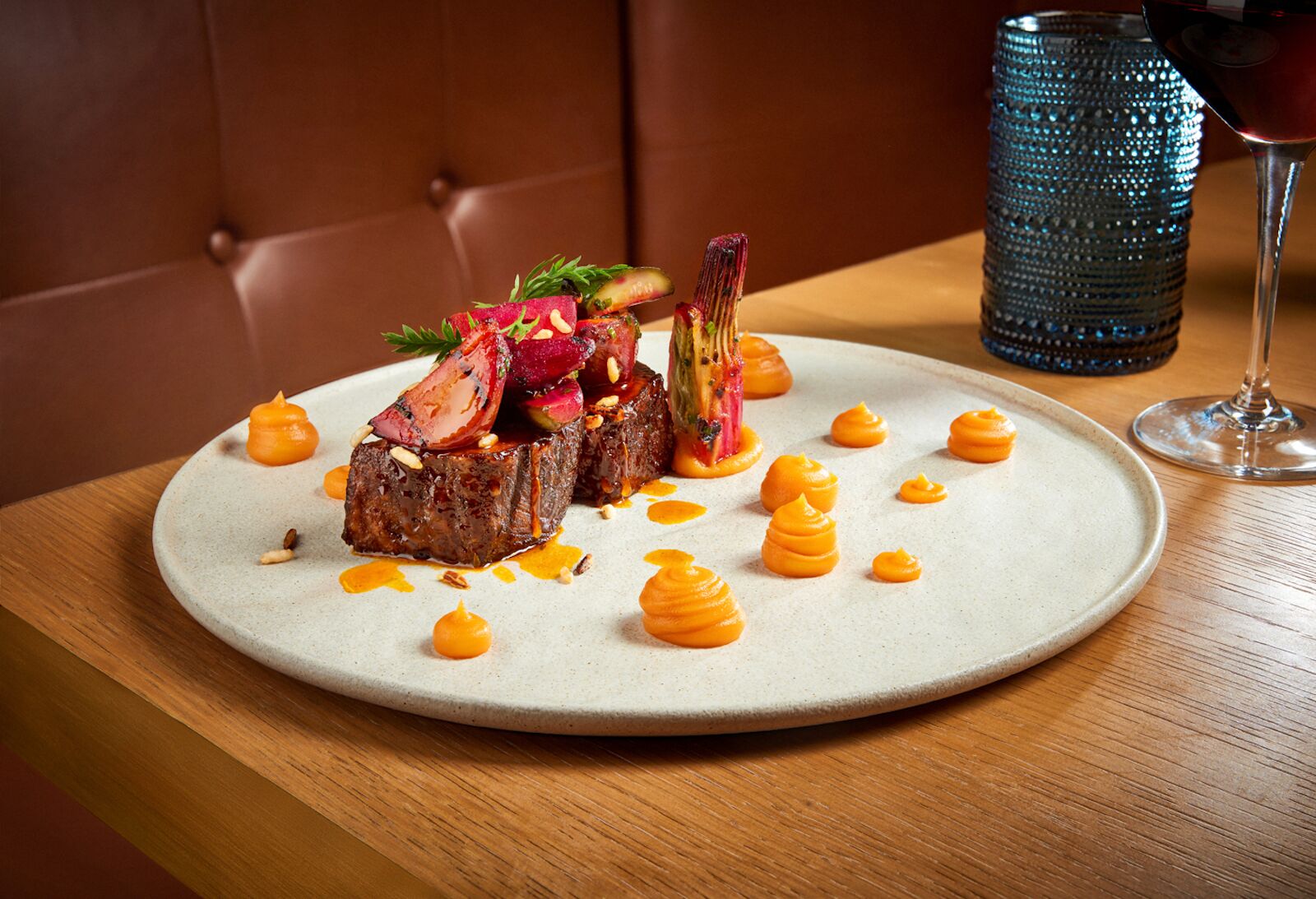 Inside Bacan, the Wave’s signature restaurant, Rosie the robot is busy bussing what’s left of the night’s duck breasts with green tomatillo and whole truffle chickens. While the food is good, what’s most striking is the art. A story-tall mural of a green butterfly that looks a little like Old Florida on acid dominates the dining room, ensuring art is still at the center of everything the Wave does.

“On its surface, it’s sexy, it’s exotic, it’s really cool,” says Parry of the mural. “But when the light comes up, you can see it’s telling a story of the nature of the area, and of the technology of the area, so everything has some kind of symbolism.”

The hotel’s cocktail bar, Living Room, is similarly a work of art. Set under a cherry blossom tree and lined with bright blue chairs, the bar serves stuff like Thomas Edison’s Bright Idea, an easy-drinking Lillet Blanc cocktail presented in a lightbulb glass.

“We’re doing a lot with low-ABV and zero ABV cocktails,” says beverage manager Alexa Delgado. “We want this to be a place people can come and have more than one drink and feel good the next day.’ 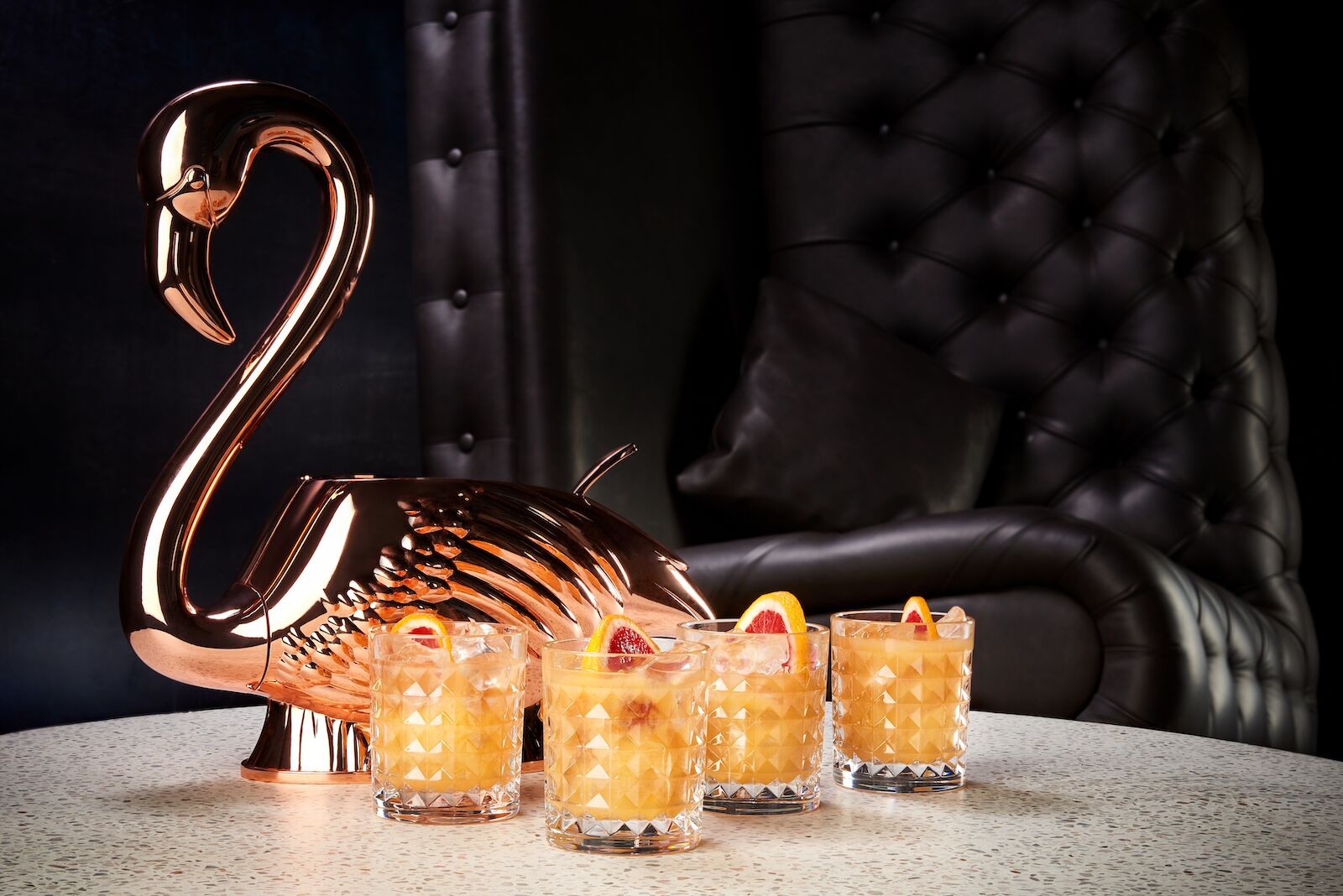 Delgado came to the Wave from the more tradition-bound world of the Ritz-Carlton, and says she’s grateful for the creative freedom she’s been given. Parry echoed that sentiment.

“Ownership really let us take the reins when it came to experience and design,” she says. “It’s been really exciting to do that.”

The bar is filled with a boisterous mix of conference guests and locals, a sure sign that the Wave has achieved its aim of being a common space for Lake Nona. With Disney opening new corporate offices literally next door, it seems tailor made for business travelers and transplants in a creative industry.

While the Wave might not be enough to bring someone to Orlando who has no other reason to be there, it’s an unexpected gem of art and design in a city that longs to be recognized for a different kind of character. It’s a provocative place to lay your head, and brings art to the hotel space in a way few properties have. It might not be a draw for tourists on the same level as Disney, but the Wave gives Orlando sophistication. And it’s certainly a lot more than one would expect sticking out of the Central Florida skyline.

Budget TravelOn Your Visit To Orlando, You Should Actually Stay (and Eat) in Kissimmee
Tagged
Art + Architecture Lux Travel Epic Stays Orlando, FL, United States
What did you think of this story?
Meh
Good
Awesome

8 of the Coolest Airbnbs Near Disney World, Orlando
This Program Lets You Reserve a Spot in the TSA Security Line Before Arriving at the Airport
The Best 11 Airbnbs Near Universal Studios

The Dos and Dont's of a Manatee Viewing Expedition, According To a Tour Operator

The Best 11 Airbnbs Near Universal Studios