Folks in New England celebrate Thanksgiving just like much of the United States: They roast a turkey for the main dish and slice up pumpkin pie for dessert. But for all its similarities, Thanksgiving dinner in the upper northeast US differentiates itself with heaps of seafood.

You might be surprised to learn that in the pantheon of Thanksgiving dishes, seafood for Thanksgiving dinner is actually more traditional than the turkey you’re used to eating every year. Oceana, an environmental nonprofit committed to advocacy for our oceans, writes that, “While we can’t prove that seafood graced the first Thanksgiving table, there’s evidence aplenty to suggest that the Wampanoag and English heartily enjoyed the fruits of the sea.” The Smithsonian surmises that because both colonists and indigenous people regularly feasted on “eels and shellfish, such as lobster, clams and mussels,” it’s not a stretch to suggest the first Thanksgiving probably included these creatures.

Of the bounty of his home in Plymouth Colony, a pilgrim named Edward Winslow offered more proof that seafood took centerstage at the first Thanksgiving: “Our bay is full of lobsters all the summer and affordeth variety of other fish; in September we can take a hogshead of eels in a night, with small labor, and can dig them out of their beds all the winter. We have mussels … at our doors. Oysters we have none near, but we can have them brought by the Indians when we will.”

Coastal states, like Maine, Massachusetts, and Rhode Island, all still have strong fishing communities, which prize shellfish like clams, oysters, and lobster. So it shouldn’t be surprising that each of these oceanic delicacies appears on the Thanksgiving dinner spread. From soups to stuffing, here are six classic New England dishes that incorporate seafood to try at Thanksgiving this year. 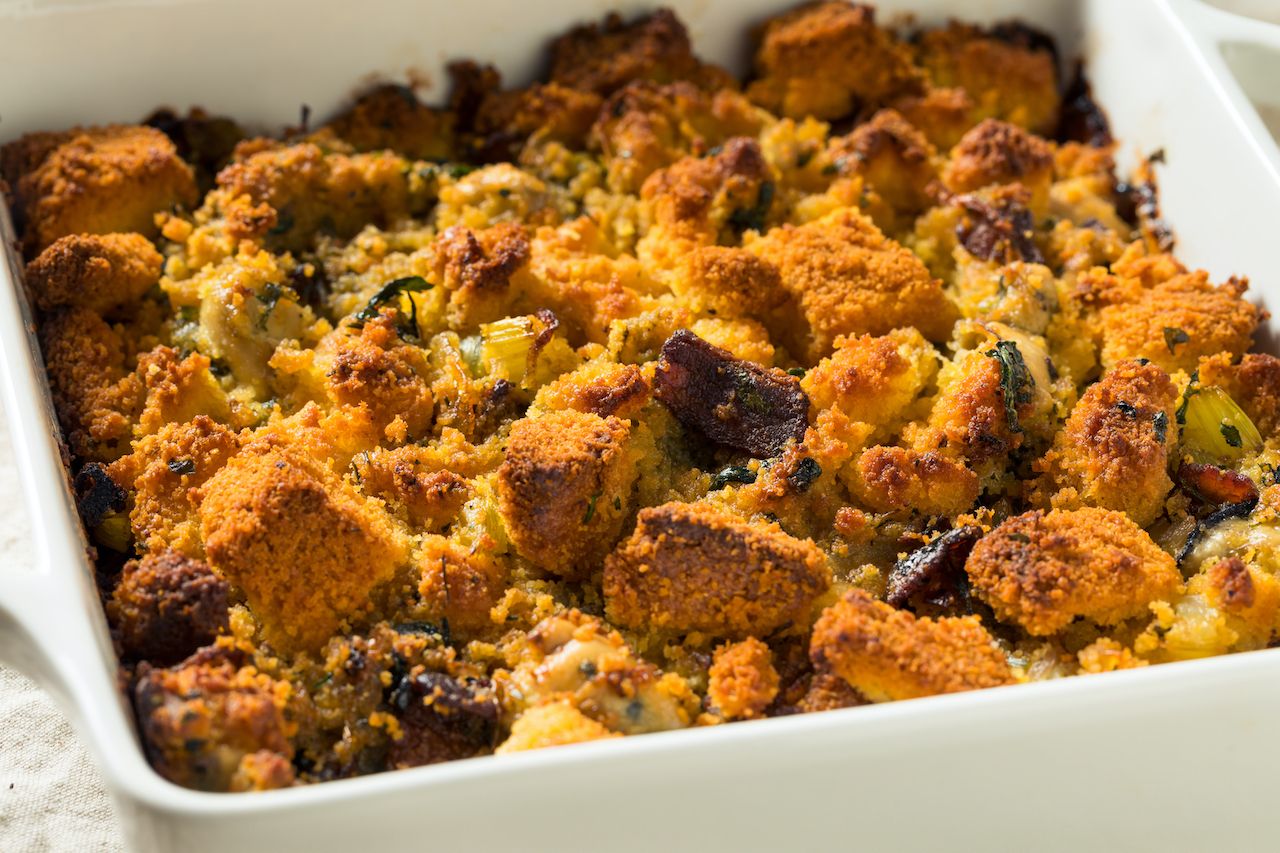 Oyster dressing (also widely known as oyster stuffing) is legendary in New England. Some accounts say that New Englanders have been stuffing poultry (including turkey) and fish with oysters and breadcrumbs for at least 330 years — especially since shellfish once crowded the shores of the eastern coast of the US.

A 1954 press release dispersed by United States Department of the Interior reinforced oysters as integral to the American Thanksgiving tradition, writing that, “There is little doubt that oysters were included among the food items on that original Thanksgiving…While many connoisseurs will prefer theirs in the natural state as the first course of the holiday meal, many others hold that the only proper stuffing for the Thanksgiving bird…is oyster stuffing.”

Oyster stuffing might have first appeared while this succulent shellfish was still abundant along the eastern coast of the US, especially since around the late 1800s, railroads brought oysters inland, creating what the The Celebrated Oysterhouse Cookbook called a “great oyster crave,” around the country.

“At the beginning of the 20th century, the American Northeast was absolutely teeming with oysters,” Caroline Lange writes in Food52. “The rich ate them, the poor ate them, the corner bar of the time was an oyster stand…Adding oysters to anything — stuffing, for example — would have been a ‘why not!’ move.”

Oyster stuffing endures as a classic Thanksgiving dish, and not just in New England, but in the South and the Pacific Northwest, as well. 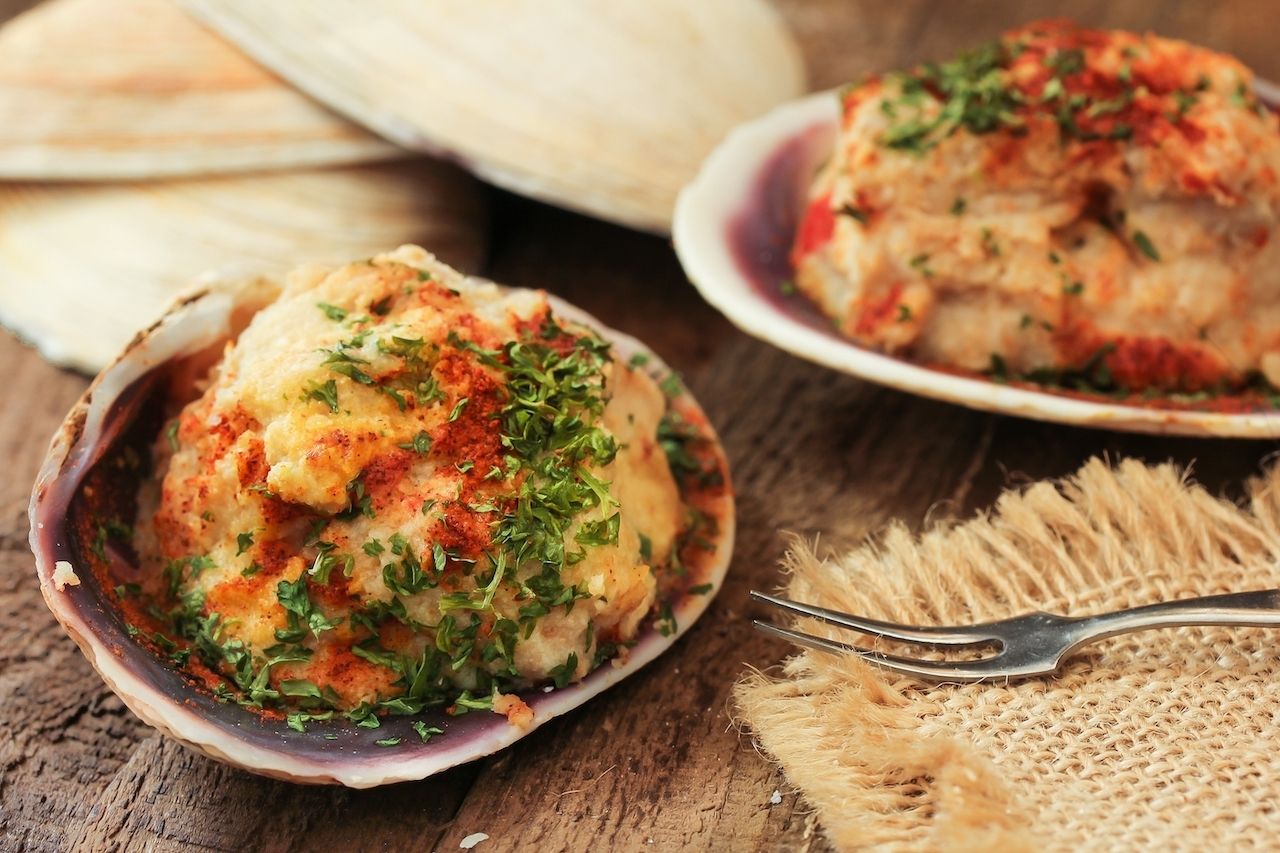 In Rhode Island, stuffed quahog clams are affectionately nicknamed stuffies. Stuffies are one of the state’s signature culinary claims to fame, and a must-have appetizer at Ocean State Thanksgiving celebrations. Breaded chopped clams, celery, onions, peppers, parsley, lemon, and garlic are baked into the extra large quahog clam shells. Stuffies are typically served as a snack during cocktail hour before the real feast begins.

Some cooks add an additional ingredient that transforms stuffies into a masterpiece: Portuguese sausage, either linguiça and chourico. The added sausage is a nod to southern New England’s Portuguese immigrants, who likely had a big role in shaping the dish, according to Food52 writer William Holt. 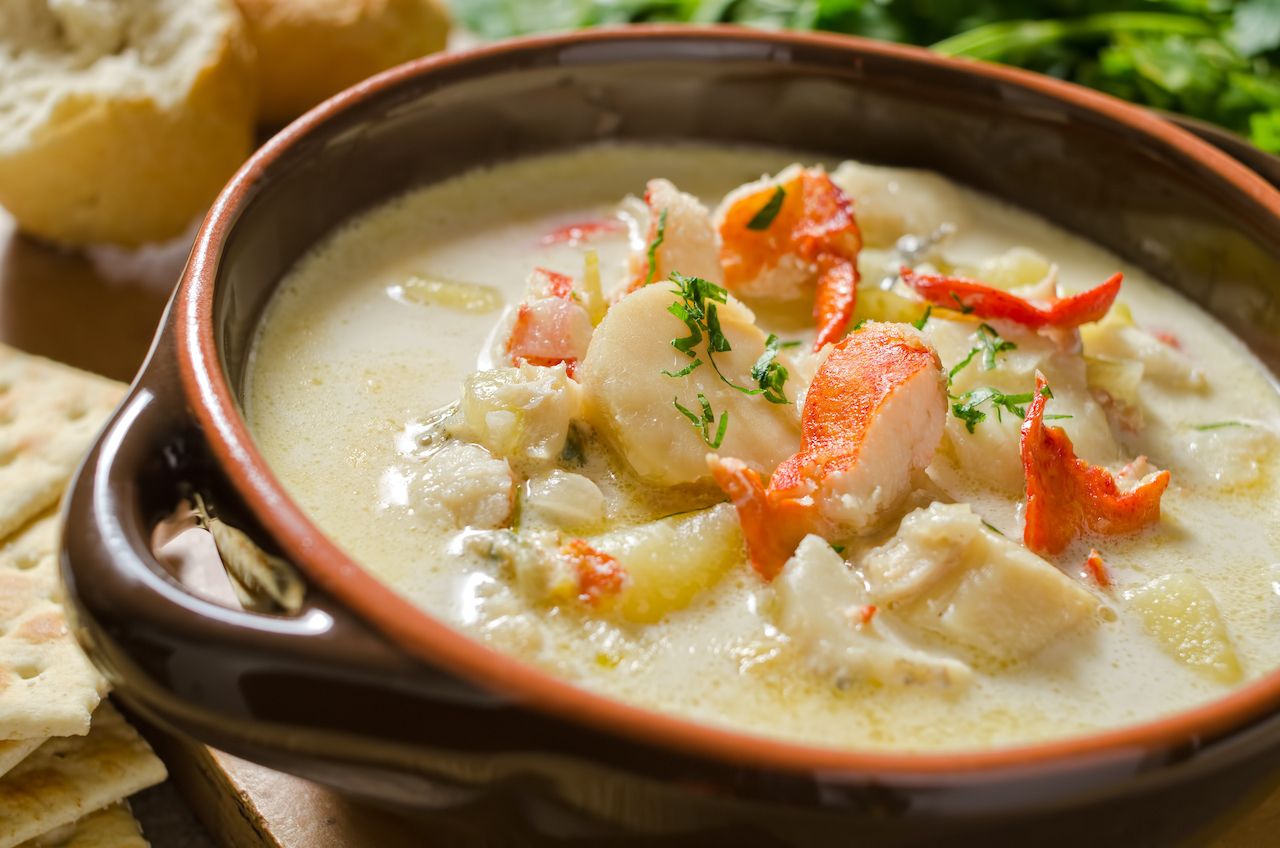 Thanksgiving menus as far back as 1870 and 1877 describe a dish called “oyster soup,” which is perhaps a precursor to what we now know as seafood chowder. Nearly a hundred years later, a 1973 cookbook listed a menu for a “New England Thanksgiving” with corn and clam chowder. These cold-weather dishes still frequently appear at the holiday dinner table.

Creamy, decadent soups that combine autumnal vegetables like carrots and butternut squash are a mainstay during the holiday season, too. The New England twist is of course the addition of shellfish. In Maine, for instance, some folks like to combine buttery pumpkin with briny shrimp in a bisque. Another go-to is a more classic option: lobster bisque. Maine is of course obsessed with lobster, and this hearty appetizer is a guaranteed crowd-pleasing opener before the turkey lands on the table. 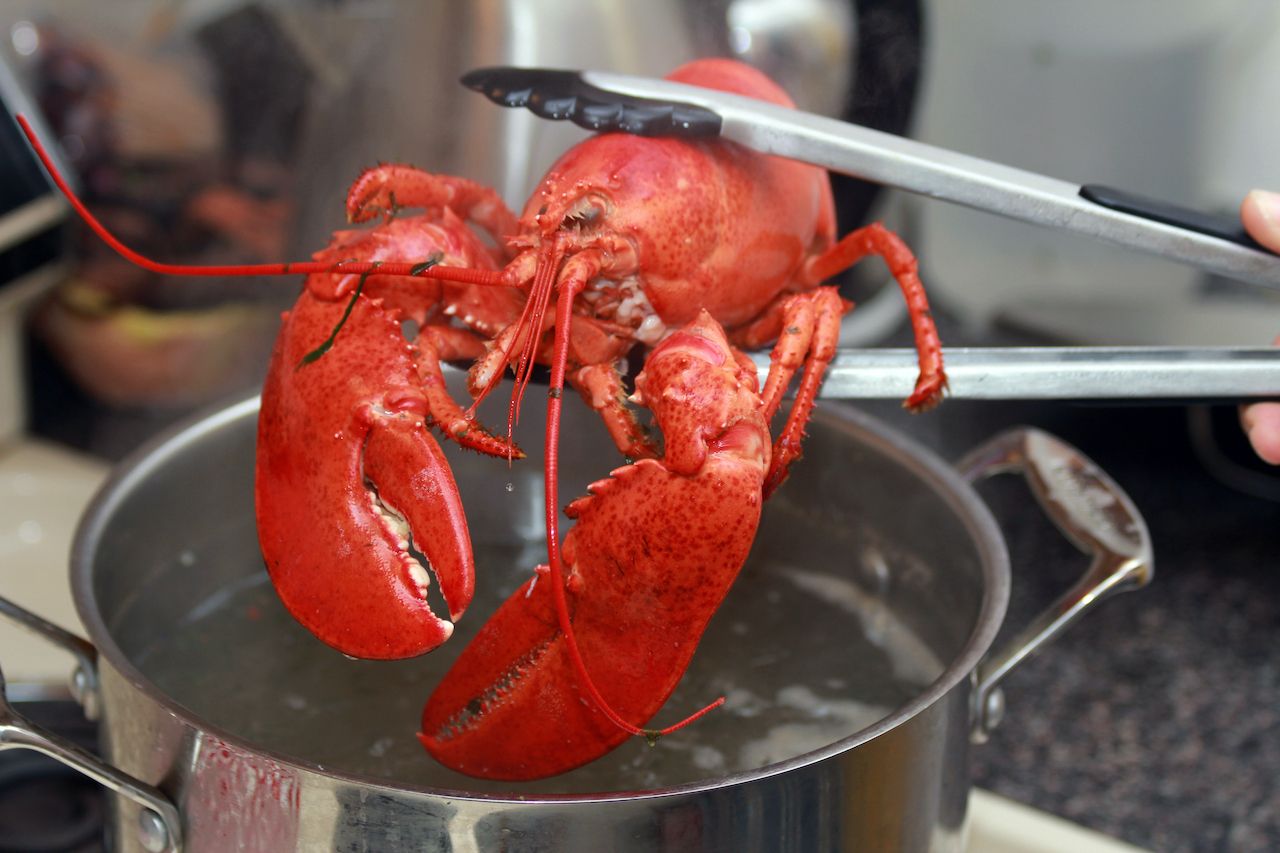 Appetizers aren’t the only place you’ll see lobster appear on the Thanksgiving table in New England. On her blog Maine-ly Lobster, Christina Lemieux writes that, “Because I grew up in a lobster fishing community, lobster has almost always featured in my Thanksgiving celebrations. In my hometown, lobster and clams are often steamed prior to the Thanksgiving dinner and served as part of a communal meal…Other friends of mine plate up boiled lobster as the focal point of their Thanksgiving feast, skipping the turkey all together.”

Whole boiled lobster drenched in butter can replace the turkey, as Lemieux specifies, but it can also be a “sidecar,” as the Boston Globe puts it, accompanying your turkey, depending on the number of guests you’re hosting and their appetite. Stuffed lobster tails make for an indulgent alternative to more traditional turkey and stuffing. 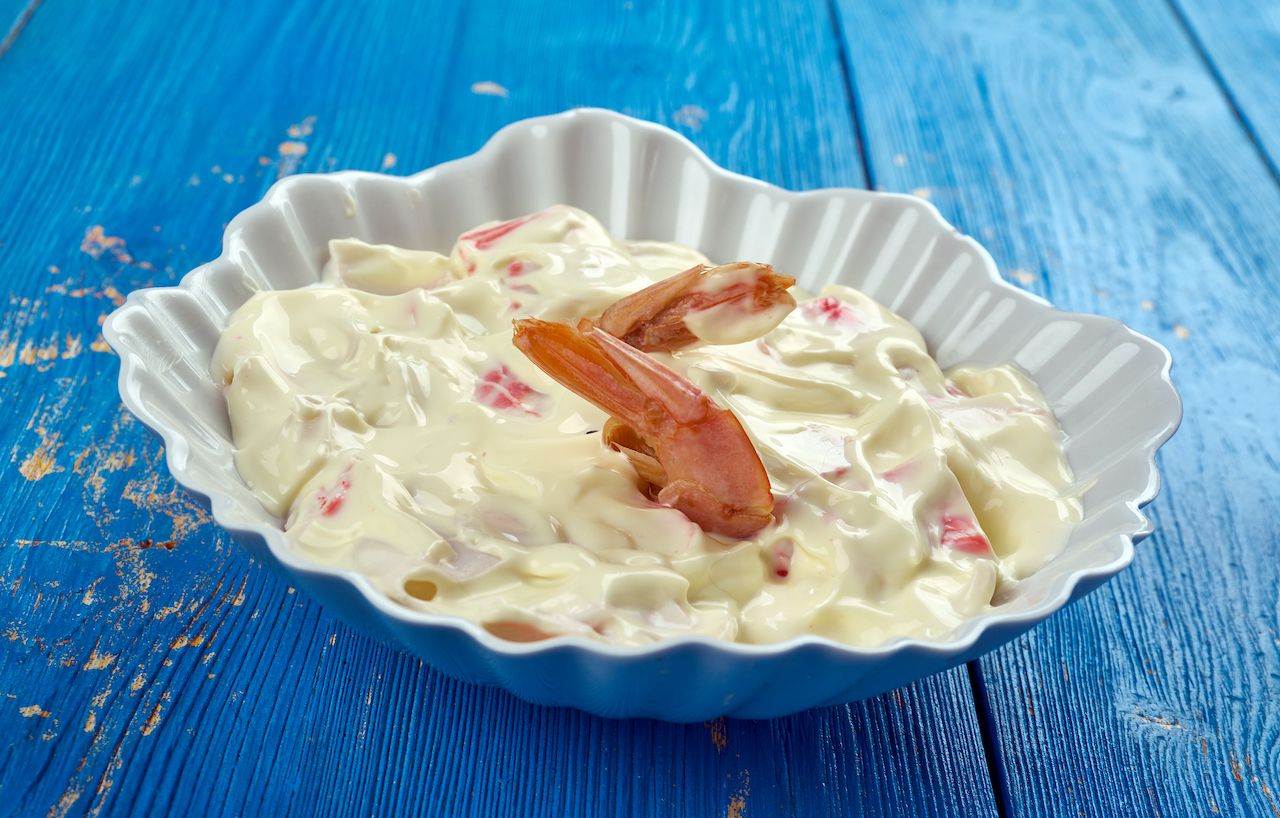 Clam dip has long been a staple at family gatherings in New England, where clams are an abundant natural resource. One 2017 report from the NOAA found that Maine produces 1.6 million pounds of soft clam meats annually, followed closely by Massachusetts. Fried clams might be a more widely known clam-based snack, but this creamy, herbaceous appetizer has a well-established presence at cocktail parties, family gatherings, and Thanksgiving dinners alike.

For instance, In the Newfoundland and Labrador Seafood Cookbook, Joan Over writes that she keeps canned clams on hand just in case she has “unexpected guests,” for whom she can quickly whip up a batch of clam dip.

According to Fashionable Food: Seven Decades of Food Fads, clam dip might have hit the height of its popularity in the early fifties. After the Kraft Music Hall featured the recipe in a segment, canned clams sold out around New York City in 24 hours. In The New York Times, Sam Sifton makes reference to clam dip as perhaps a relic of any earlier age, writing, “Here is a taste of New England game days circa the time when televisions had dials…and if you couldn’t get fresh clams…a can or two would do just fine.” 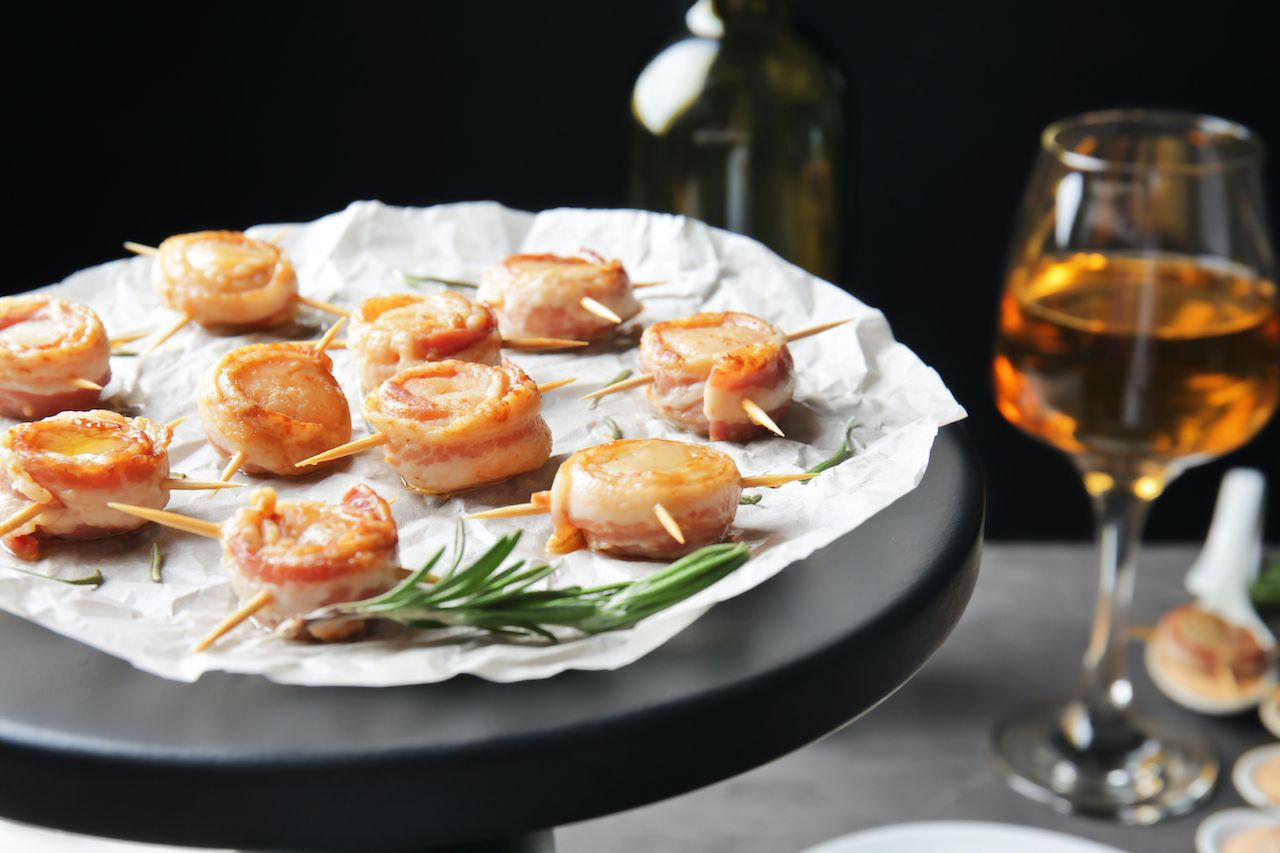 One perhaps apocryphal story contends that bacon wrapped scallops might have originated in New Bedford, MA, where this bountiful gift from the sea arrives by the boatload at the city’s bustling docks. It’s also possible British colonists might have influenced the invention of bacon wrapped scallops; an appetizer called angels on horseback — oysters wrapped in bacon — is popular in England. Today, this finger food is still wildly popular in Massachusetts, and a common Thanksgiving dinner appetizer. Mainers like their sweeter scallops wrapped in bacon too, while Boston-based chef Matt King seasons his version with garlic butter.