For years, I put Wisconsin’s House on the Rock safely in this territory, hearing about its extravagant Christmas displays, its creepy often-topless mannequins, its bizarre collection of automated music machines — it sounded like a place one resorts to on a rainy afternoon or a desperate attempt to salvage an awkward second date.

The first hour or two of my first visit of the House on the Rock proved to be exactly that. I laughed, I judged, I squinted and furrowed my brows until my face hurt. But upon emerging from a dark hallway and into a room that holds the world’s largest indoor carousel (nary a horse is present, by the way), it hit me hard: I became jealous, inspired, awestruck. Whoever created this place got to live out their wildest fantasies — and charge others for the privilege of walking through them.

What’s the story behind the House on the Rock? 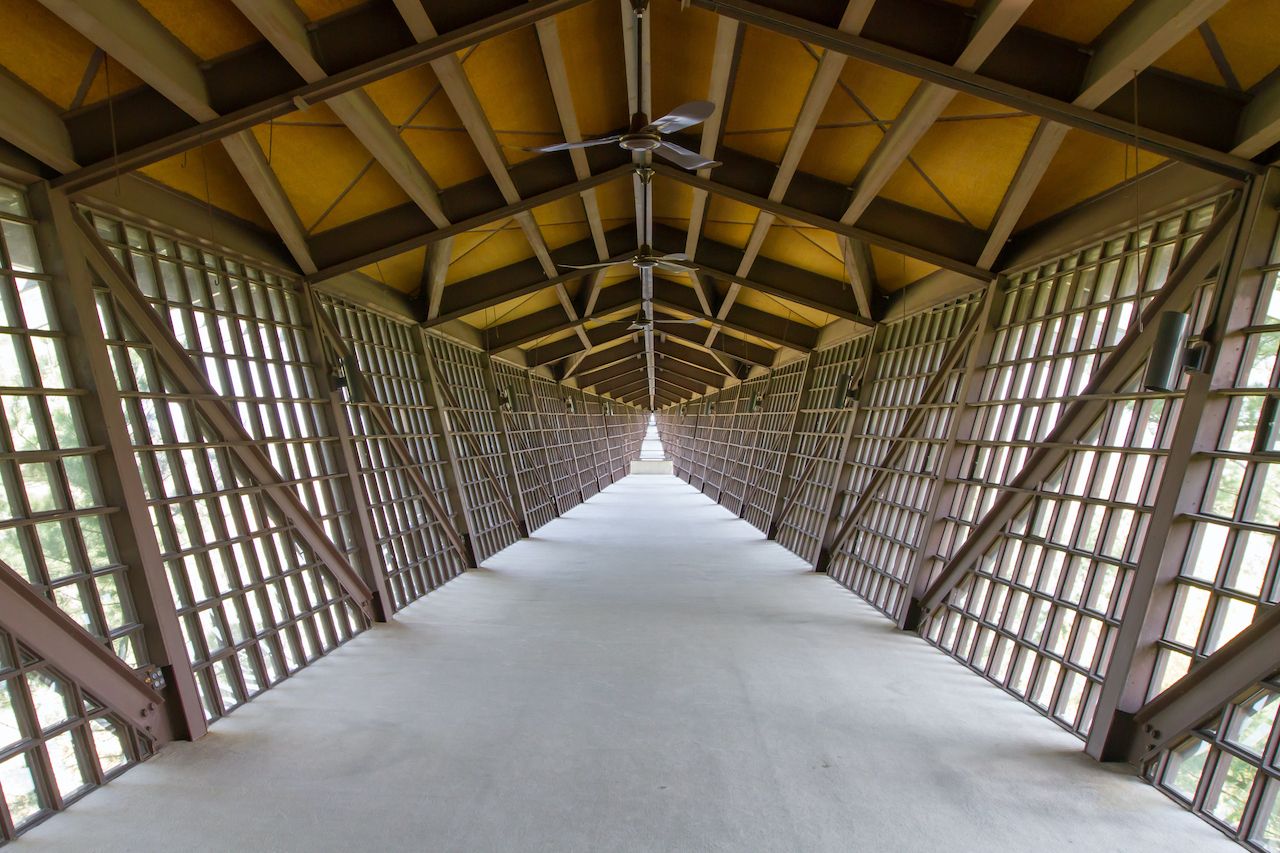 Alexander John Jordan is the man behind the House on the Rock. He used to just sit in quiet corners and watch the faces of visitors, delighted in every eyebrow raise, every smile, every blank stare. He loved the reactions — all of them — from sheer, childlike joy to heebie-jeebies to terror.

That being said, the House on the Rock didn’t start out as a tourist attraction. Jordan fell in love with the land as a young man, eventually buying the property from a farm family, the Christiansons. The land was and is called Deer Shelter Rock, and the house is both on and in the limestone bluff it sits on — the sunken orange-and-brown living rooms straight out of Austin Powers are lined with actual trees and actual rock faces. How it works, I still do not know.

The massive complex started out small, Jordan working with small teams room by room, year by year, each corner not necessarily similar to the next. It was originally built in Japanese style, though those notes faded as construction went on. Fourteen years in, he realized he could supplement his funds — building the thing wasn’t cheap — by charging a fee. Though the House on the Rock has technically been open since 1959, it’s always been a work in progress. The collections get grander, more eccentric, more accumulated (and not necessarily curated). Some are authentic, many are not, but it doesn’t matter: You are not there for the artifacts. You’re there to see what a wild, child-like fantasy looks like built into a hill, dream room after dream room, unconcerned with reality and logic. Maybe, if you’re honest, you’re there to find out what his vision looks like to get a better handle on yours.

What to expect at the House on the Rock 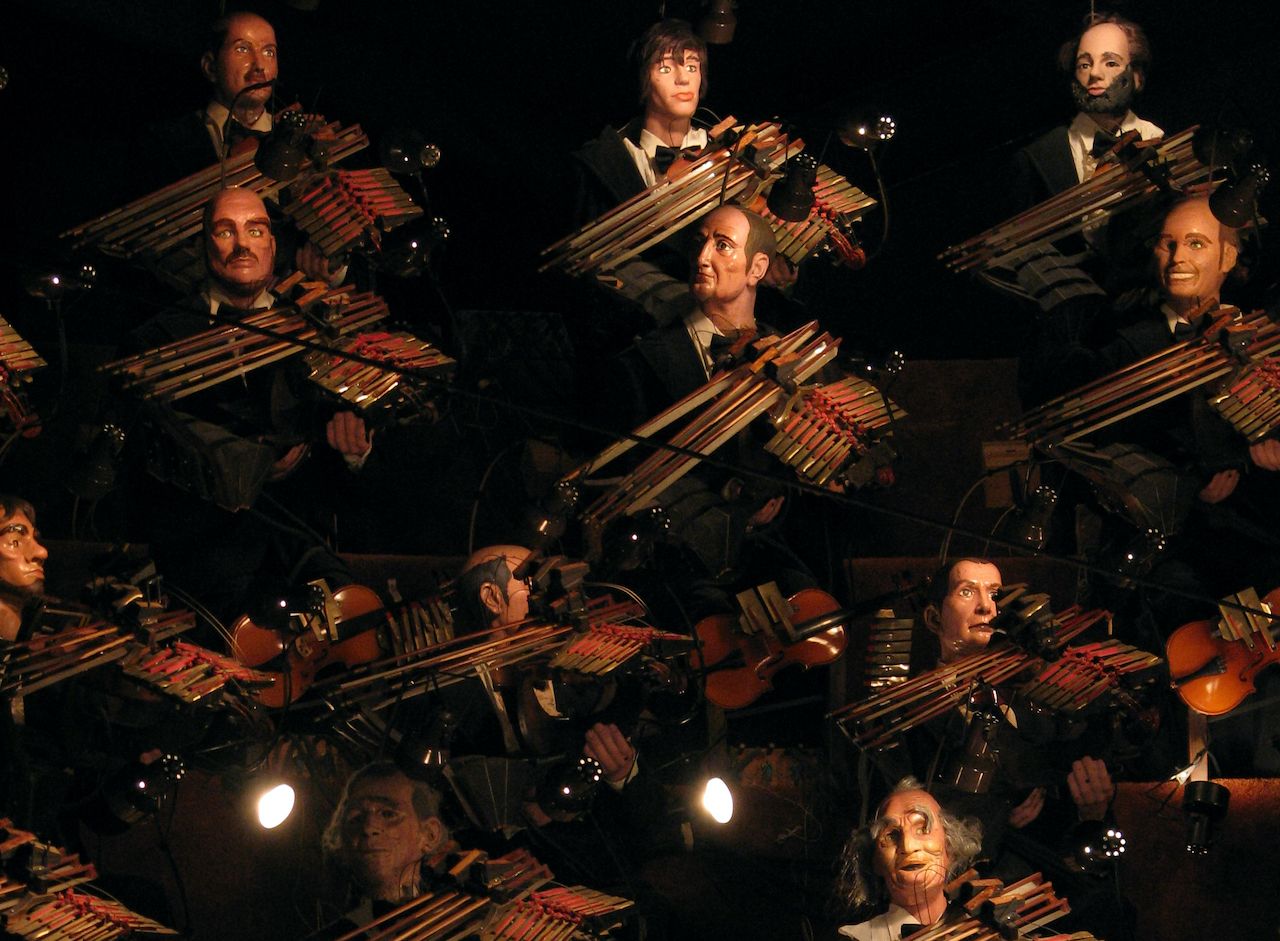 From the lobby, the house is divided into three sections, and you’ll work your way through the one-way maze pretty directly, though staff are available if you get turned around. (Note: The house has many staircases.) The first section takes about 45 minutes and is almost completely unlike the other two. Though the Asian Garden — feel free to sit amongst the waterfalls and koi ponds if you’d like — and the original house are highlights, it’s the Infinity Room that takes the cake. Yes, it goes on forever.

Section two can take a solid two hours, if for no other reason than the fact that you’ll be kept busy trying to unsear your brain. Heritage of the Sea — a blimp hangar if empty — houses a 200-foot-long sea creature (a whale?) battling an octopus (maybe?), its edges lined with multi-story levels and maritime memorabilia. Eventually, section two leads to the magnificent carousel room, the piece de resistance that somehow isn’t the end. To exit, you’ll walk through the red-carpeted throat of a demon.

You’re now in section three, thoroughly confused, delighted, or scarred, now navigating the even-more-gigantic Organ Room, the Doll House Room, the Circus Room, eventually winding your way to Inspiration Point. Don’t miss this bit — it’s an outdoor breather and a moment with the beautiful bluffs of central Wisconsin. Another one or two hours later (that’s right!), you’ll finish in the Japanese Garden, wondering what the hell you just experienced, if it was even real, and if you loved it or hated it. But most importantly: If you had a billion dollars, what kind of fantasy would you build? Would you welcome others into it? And if so, what would they think?

Where is House on the Rock? 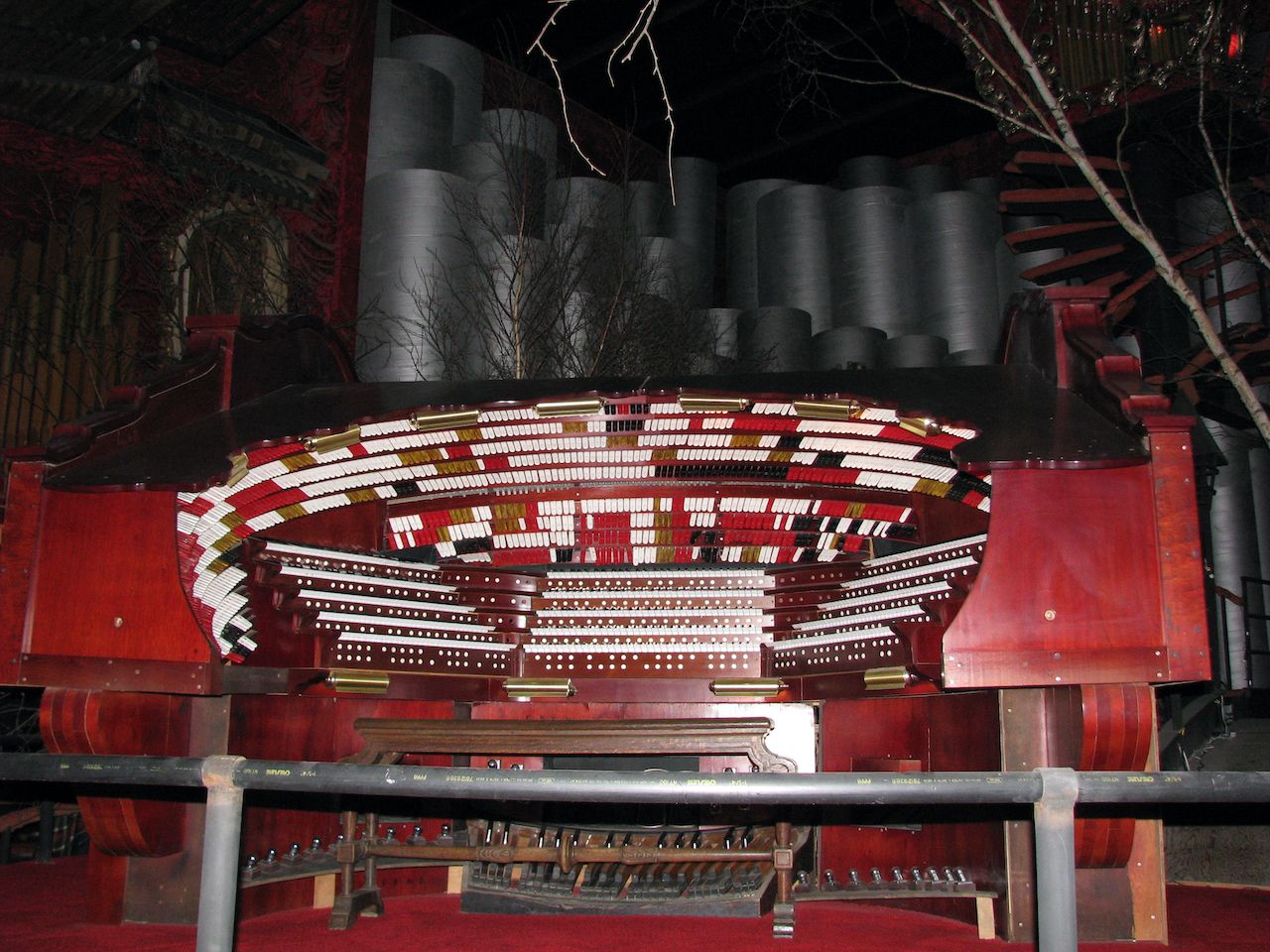 The House on the Rock is in Spring Green, Wisconsin, about an hour west of Madison (two hours from Milwaukee). In addition to the house, there’s an inn and resort on site, should you need a place to stay the night.

Nearby is the American Players Theatre (APT) — a nationally known company with a great outdoor amphitheater — and Governor Dodge State Park, both worth a stop if you’re making a day or weekend trip. The town of Spring Green itself has a few cute shops and restaurants, though it’s largely escaped becoming a tourist hotspot, despite its crowd-inducing attractions.

House on the Rock tickets and hours

No matter when and how you purchase your admission ticket, don’t forget to bring a few dollars cash to exchange for tokens which can be used to play automated musical instruments found throughout the house.

The House on the Rock is open from 9 AM to 5 PM; the last admittance is at 3:30 PM for the Christmas experience, and at 4 PM for the regular visit.

The days of operation of the House on the Rocks vary throughout the year. It is closed from the start of January to early March, when the spring opening days start (open Thursday to Monday and closed Tuesdays and Wednesdays). The house is open daily in the summer (from May to September), but reduced days apply again in fall and during the Christmas season. Check the House on the Rock’s website before visiting to make sure it is open.

Visiting during the Christmas season is an especially memorable experience, with decorations practically a collection of their own.

How long does it take to walk through House on the Rock? 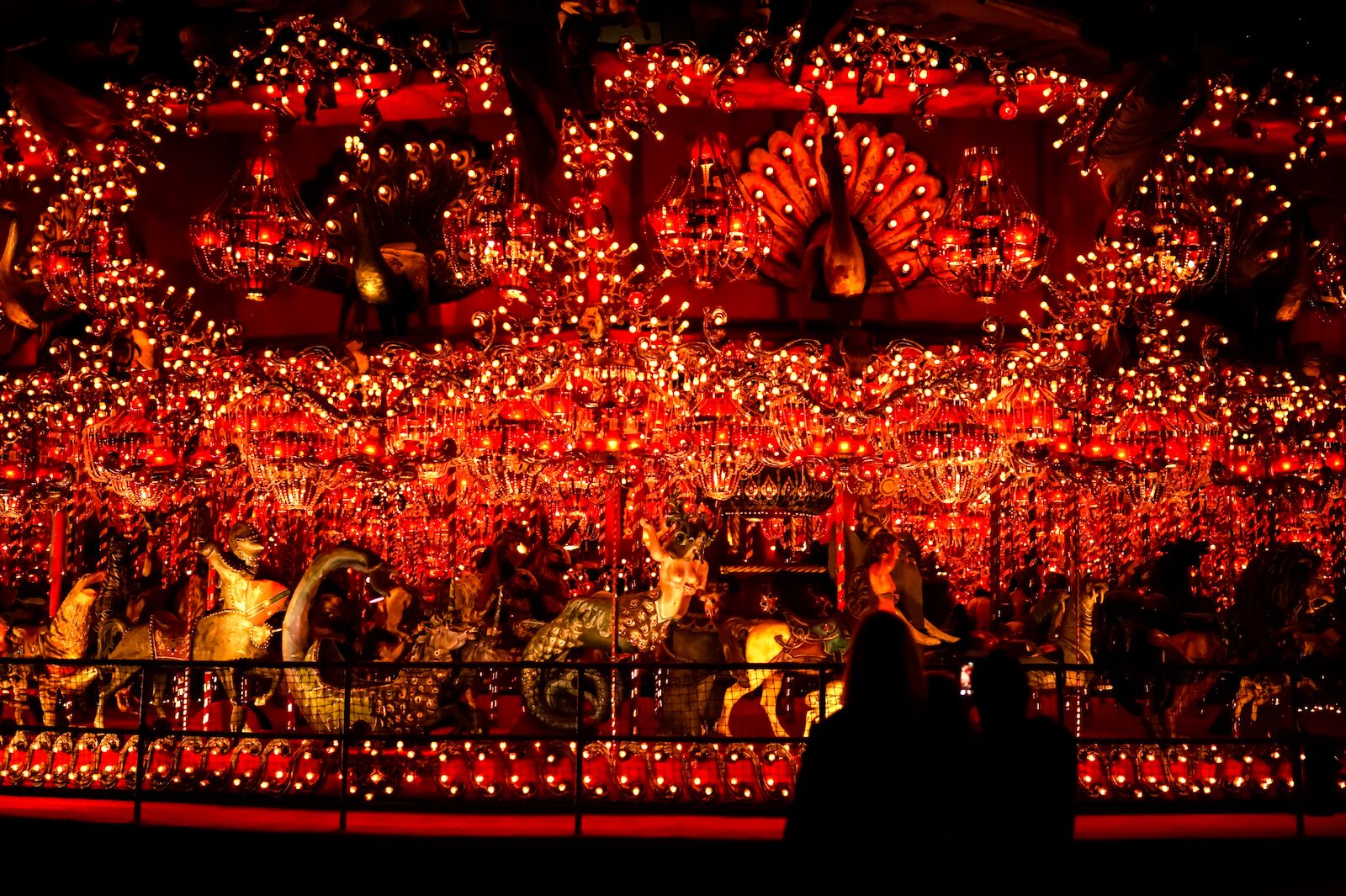 It is recommended to budget 3.5 hours to visit the House on the Rock. The house is divided into three sections; the first section takes about 45 minutes, section two can take a solid two hours, and section three can take another one or two hours.

Who currently owns the House on the Rock?

House on the Rocks has been owned and operated by the Donaldson family since December 1988 when Alexander John Jordan sold it to his business associate Art Donaldson.

How many rooms does the House on the Rock have?

House on the Rocks consists of 13 rooms all spread out between the house’s three sections.

NewsThe Best Road Trip Itinerary To See the Most Popular Roadside Attractions in the US
Tagged
Museums Insider Guides Wisconsin, United States
What did you think of this story?
Meh
Good
Awesome