I’m hunkered down on a plastic stool that can’t be more than six inches off the ground. About to make a joke about how my knees are at my chin, I look up at my dad — who has about eight inches of height on me – and see that his knees are quite literally touching his shoulders.

The two of us are seated in a tiny bar in Hanoi, Vietnam – if you could call it a bar. It’s more of a makeshift hut in which the asphalt from the street serves as the floor, the roof is held up by a couple of deteriorating concrete walls, and a large open archway serves as both the entrance and as a drive-through for motorcyclists waiting in line for a quick beer to-go. There are a few more plastic stools scattered around the 50-square-foot establishment and a single table with a plate of freshly roasted peanuts in the middle. But the focal point of this sparse joint is the keg. It’s also the reason my dad and I squished onto our bar stools: The keg contains the cheapest beer in the world.

The clock has barely struck 9:00 AM and joining us at this early morning hour are a couple of elderly men who pay a visit to this place every day. A quick hello to their friends and they get down to business, handing over their 4,600 or so Vietnamese dong (about 20 cents) in exchange for a cold frothy pint of the inexpensive and wildly popular beer called bia hoi.
Hanoi is famous for its bia hoi, which translates literally to “fresh beer.” Bia hoi is also the phrase used in these small roadside bars like the one I found myself in that morning, taking part in the daily ritual. Bia hoi also embodies an essential adventure for any visitor to Hanoi.

What is Bia hoi?

Bia hoi is brewed fresh every single day and has a short shelf life. Each morning, just after dawn, motorbikes zip around Hanoi delivering stainless-steel kegs filled with hours-old bia hoi to all the bars in the city. It lacks preservatives, making it spoil quickly, sometimes going bad by nighttime the same day. To get the freshest taste of Bia hoi, many locals start their day with a frosty fix.

The French introduced beer to Vietnam in the 1890s, and it was originally intended for the upper classes only. At the time there was only one brewery in Hanoi, called Hommel Brewery, and it was an expensive luxury inaccessible to most local people. Years later, when Vietnam gained independence, bia hoi was introduced as an affordable beer option for all of Hanoi’s residents.

Where bia hoi is made and how it tastes 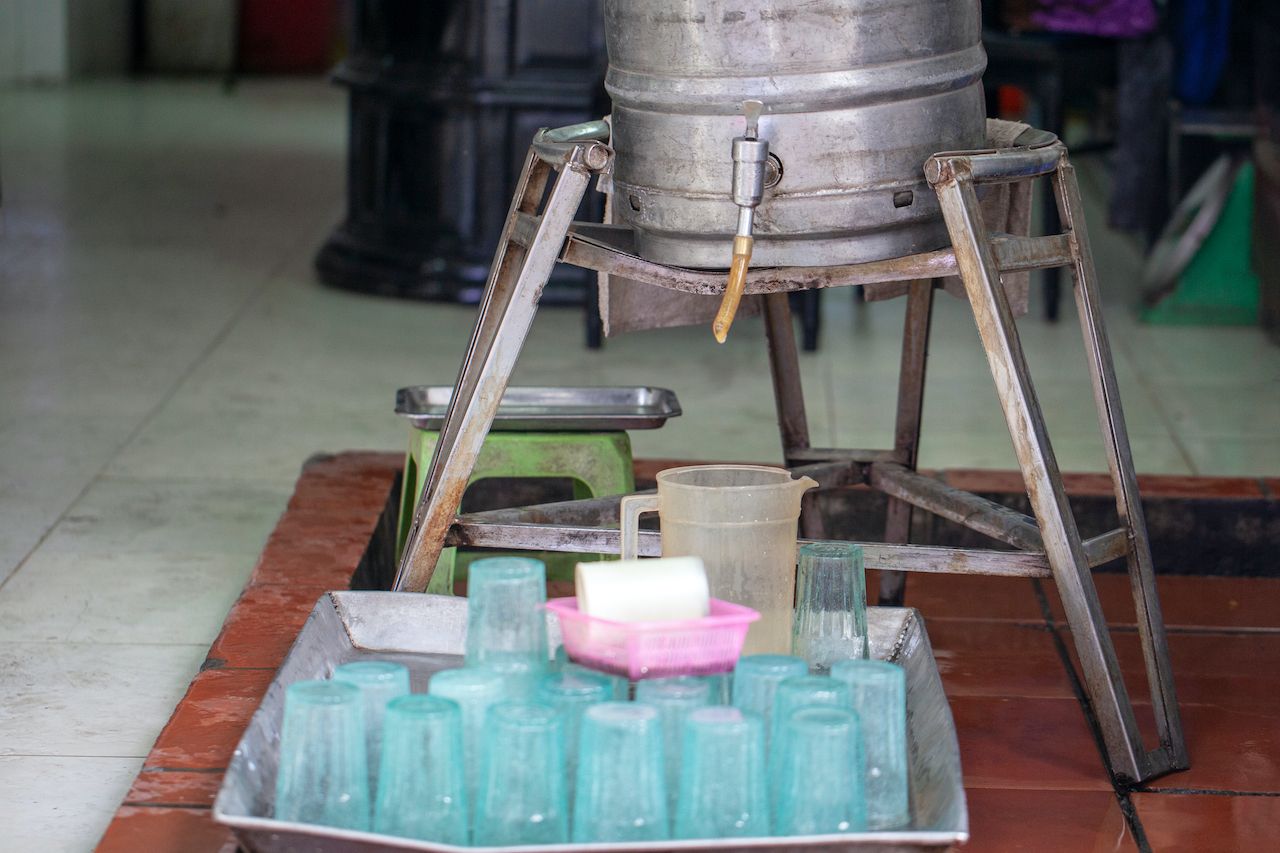 Hanoi Brewery, Viet Ha Brewery, and South East Asia Brewery are the three most popular breweries that make bia hoi today. Their beer is as ubiquitous around the city as their advertising. You would be hard-pressed to go even a block without seeing the names of the breweries in big bold writing on the side of a keg or a sign plastered inside a restaurant window.

Back at the bar, my dad and I are each handed a cold, golden pint of bia hoi in big clear mugs. After one sip it’s easy to see why it’s so popular, aside from its cheap price tag. It’s clean, crisp, and surprisingly refreshing, even at nine in the morning. At only 3 percent alcohol, it’s easy to drink, and having at least a second seems like the norm.

Where to try bia boi 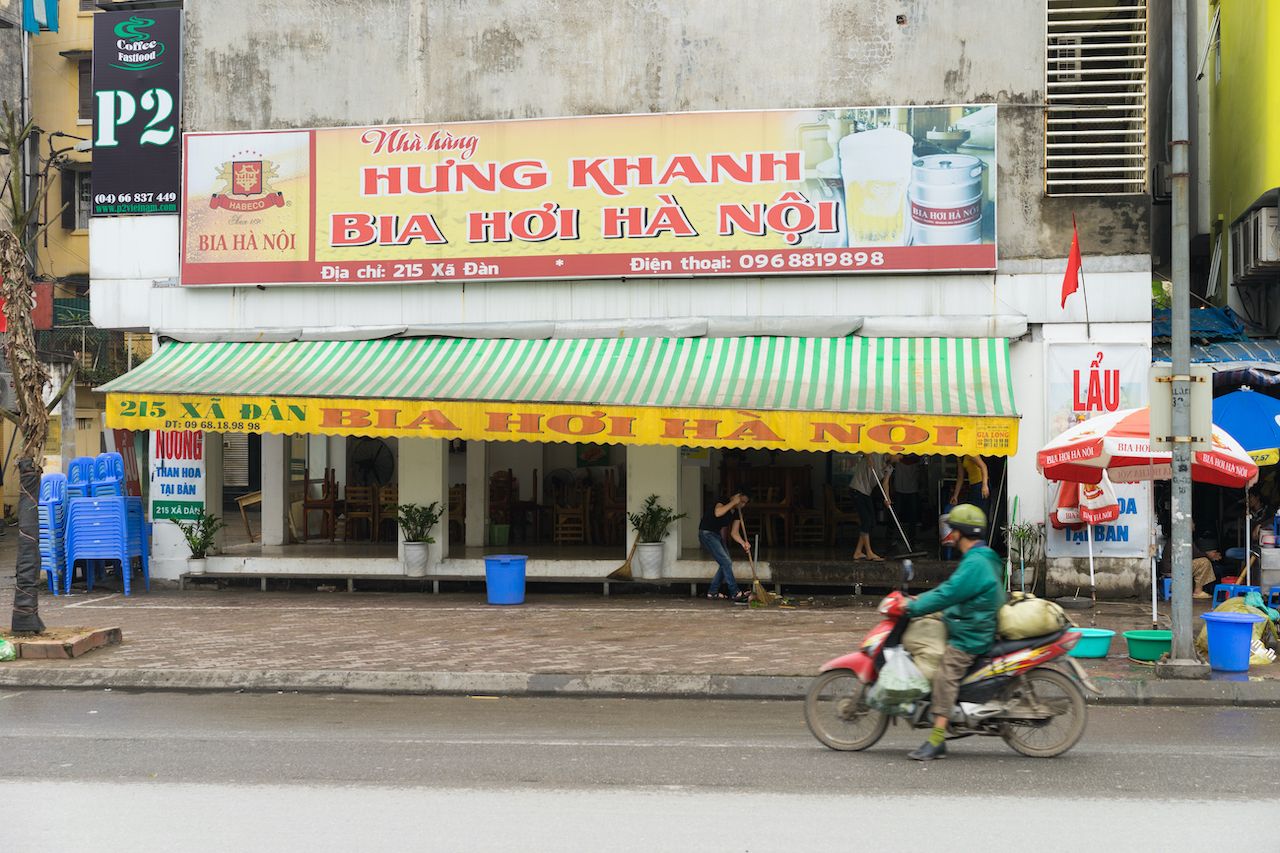 Later that evening, my dad and I sat down at another bia hoi joint on what locals refer to as Beer Corner. At the intersection of Ta Hien and Luong Ngoc Quyen streets in Hanoi’s labyrinth-like Old Quarter, a different side of the capital emerges as the sun sets. This neighborhood is the heart and soul of the city, with bustling marketplaces, delicious street food, and narrow alleyways you could get lost in exploring, but after dark, the place to be is a sidewalk bia hoi bar enjoying Hanoi’s favorite beverage.

We sit down on the recognizable plastic stools and take in the sights and sounds of the city as it prepares for the evening ahead. The atmosphere is informal. Friends wave down others passing by to join them, neon lights illuminate the narrow street, food vendors pace back and forth between the crowded bars, and conviviality radiates as more plastic stools are pulled up to accommodate the ever-growing number of people.

Lively music fills the streets as beers slosh onto the sidewalk. I take a sip of the familiar ice-cold, frothy ale, which is beginning to taste of comfort and calmness, very much welcomed as an antidote to the hectic pace of Hanoi. It becomes clear that the allure of bia hoi is much more than the drink itself or its wallet-friendly price — it’s central to the ritual of relaxing and socializing among friends.

Beer Corner is a great starting point for your bia hoi experience. Wander down the narrow streets to find many lively options with ample sidewalk seating, perfect for people watching. Just down the road, Bia Hoi Ngoc Linh has a great local atmosphere and good food. Beyond the Old Quarter, the French Quarter’s Bia Hoi Thien Nga is rumored to be Hanoi’s first bia hoi bar, and Bia Hoi Nha Hang Truc Bach has lovely views of Truc Bach Lake.