When you think of Colorado, there’s a good chance two things are top of mind: beer (there are more than 400 craft breweries in the state) and wellness (Colorado often ranks among the healthiest states). Now you can soak in both at the same time in Denver’s only beer spa.

The Beer Spa by Snug opened in Denver’s Five Points neighborhood in February. The front room looks like a chic, well-lit lounge. Beer flows from 10 pour-it-yourself taps from iPourIt, six of which are selections from a local brewery (nearby Ratio Beerworks was the guest brewery when I visited, and Denver Beer Company is up next), along with a tap for a gluten-free beer, a cider from Denver’s Stem Ciders, and a red and a white wine from the city’s Infinite Monkey Theorem. Custom Beer Spa tumblers with tops make it easy to bring your beverage with you wherever you go — including the spa, which is just as beer-centric as the front room.

To be clear, there’s no literal soaking in beer regardless of which room you’re in. Instead, guests who book a 90-minute spa session are guided to rooms where beer ingredients can be found throughout.

“We’re not pouring Coors Light into your bath,” says Damien Zouaoui, who opened the spa with his wife and business partner Jessica French. “It’s hops, barley, and herbs in a sort of tea bag in the tub.” 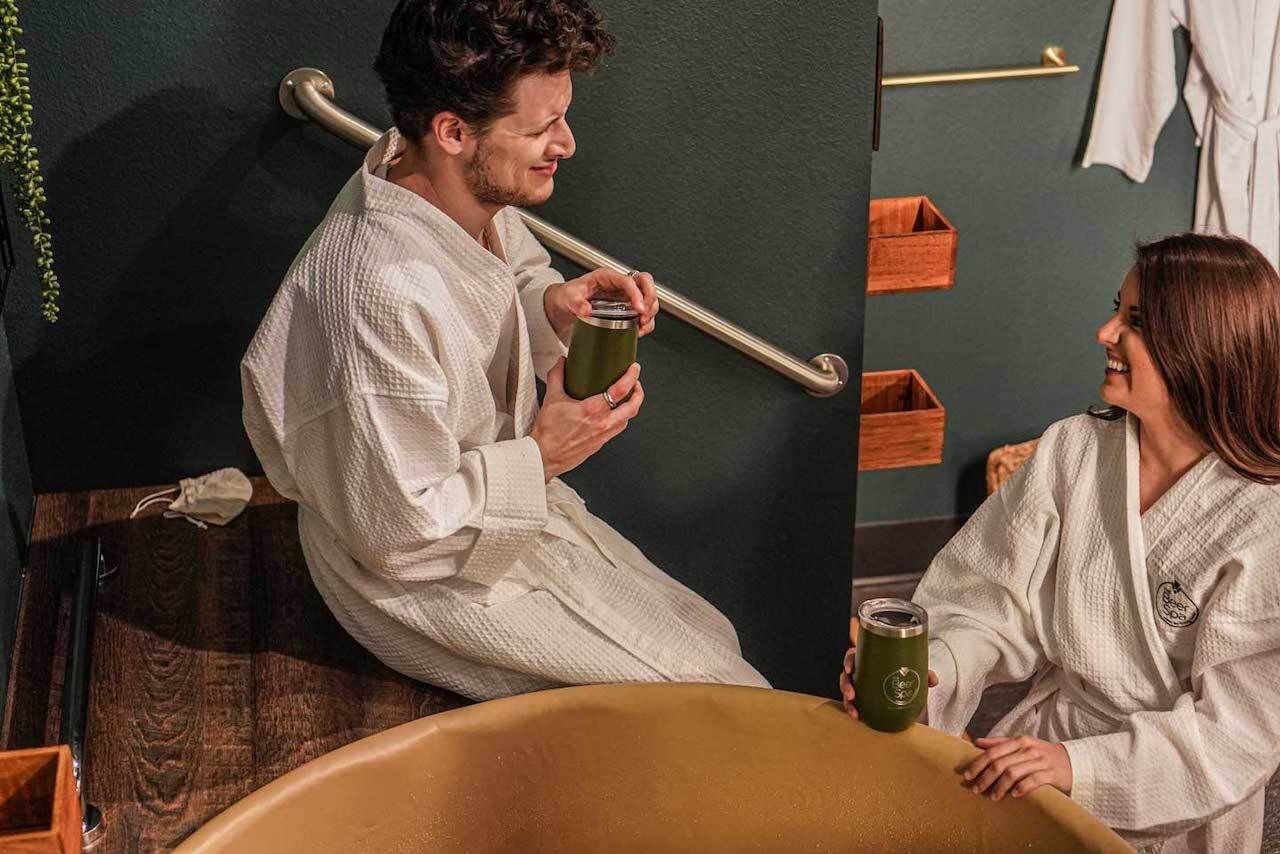 Along with the tub, each sauna room is also outfitted with an infrared sauna and a rain shower with beer-infused soap. It’s more than a gimmick for residents and guests in one of the beer capitals of the US. A 2019 study by researchers in Germany found that hops can help skin thanks to antioxidant and anti-inflammatory properties. In 2017, hair restoration surgeon Ryan Welter told Fox News that the proteins and vitamins in barley and hops can help promote healthy hair.

As someone who washed their hair with vodka for a week in the name of journalism, I have to admit I fall squarely in the category of people ready to embrace an alcoholic drink as more than, well, a drink.

I’m clearly not alone. Sitting at the edge of the hydrotherapy tub during a tour of the facility, Zouaoui tells me that the hops and barley mixture is invigorating and relaxing all at once, plus vitamins B and K in the ingredients benefit the skin. To top it all off, he adds that his grandparents in France used to wash their hair with beer.

Guests get to choose their own pace and format for their beer spa treatment. Zouaoui suggests starting with the sauna for about 20 minutes, a quick cold shower that’ll “make you feel like a god in heaven,” and then 20 to 30 minutes in the tub.

Each room is designed to fit up to three people, and the first room is completely wheelchair accessible with extra space and a lift to get into the soaking cask. There’s also the option to book two adjacent rooms and open a garage door between them for a spa day party with four to six people.

The decision to install a functional garage door into a wall was a big renovation and effort. It was far from the only one as Zouaoui and French turned a historic Denver building into a beer spa. 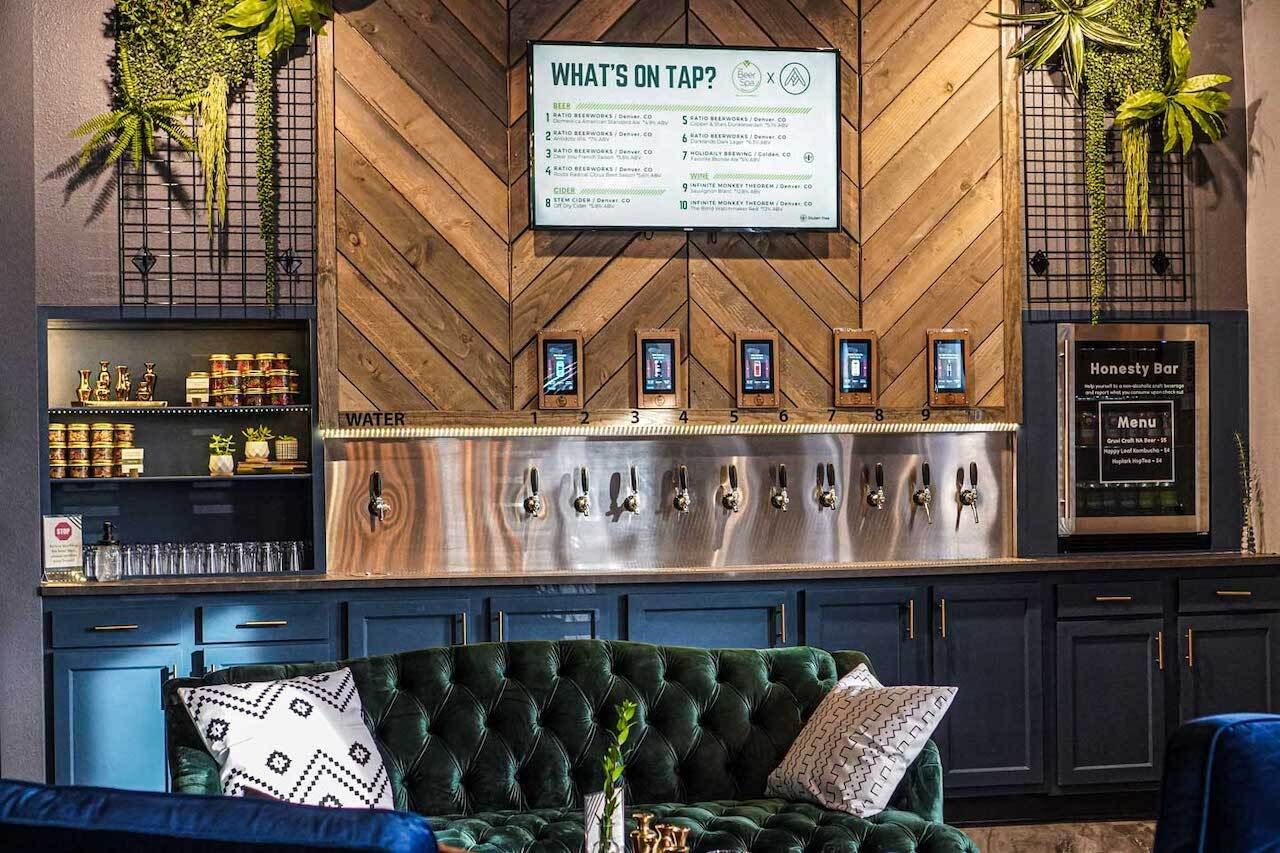 Zouaoui grew up in Paris and Bordeaux, and then moved to the US for a job in the travel industry. He worked with resorts in the Caribbean, followed by a stint with a VIP events company in New York City, where he met French.

They’ve always had an entrepreneurial itch, Zouaoui says, and knew they’d eventually start their own business. Inspiration for a beer spa came from a 14-month trip to 25 countries. They visited communal beer spas in Eastern Europe that were popular with locals and guests despite Oktoberfest-esque kitsch. Instead, they opted to keep the beer, nix the after-spa bread and sausage, and add a wellness angle.

In September of 2018, they came up with the business model. Austin, Seattle, and Chicago were all on the map for potential locations, but they settled in Denver for its love of beer and the relative ease of starting a business. Zouaoui and French rented a building with a long history as a clothing manufacturing center, a nightclub called G Spot, a brothel, and eventually a Baptist church, Zouaoui says. In short, installing interior garage doors and a self-pour beer wall was just one part of a massive renovation (the design is all inspired from their travels, and is a mix of modern trends and a woodsy Colorado vibe).

The city provided some help. A loan in early 2019 from Denver’s Office of Economic Development and Opportunity provided about half of the business’ funding, and the rest came from Colorado Lending Source. It ultimately seems like Denver was the right choice: Reservations for the rooms quickly filled up, and the couple went on a staff hiring spree to help keep things running.

“Denver’s beer scene made it easy to start here and bring beer and wellness together,” Zouaoui says. There’s no question that personal investments in wellness and self care proved their worth in 2020. Colorado’s inherently laid-back nature makes the beer spa a natural fit. 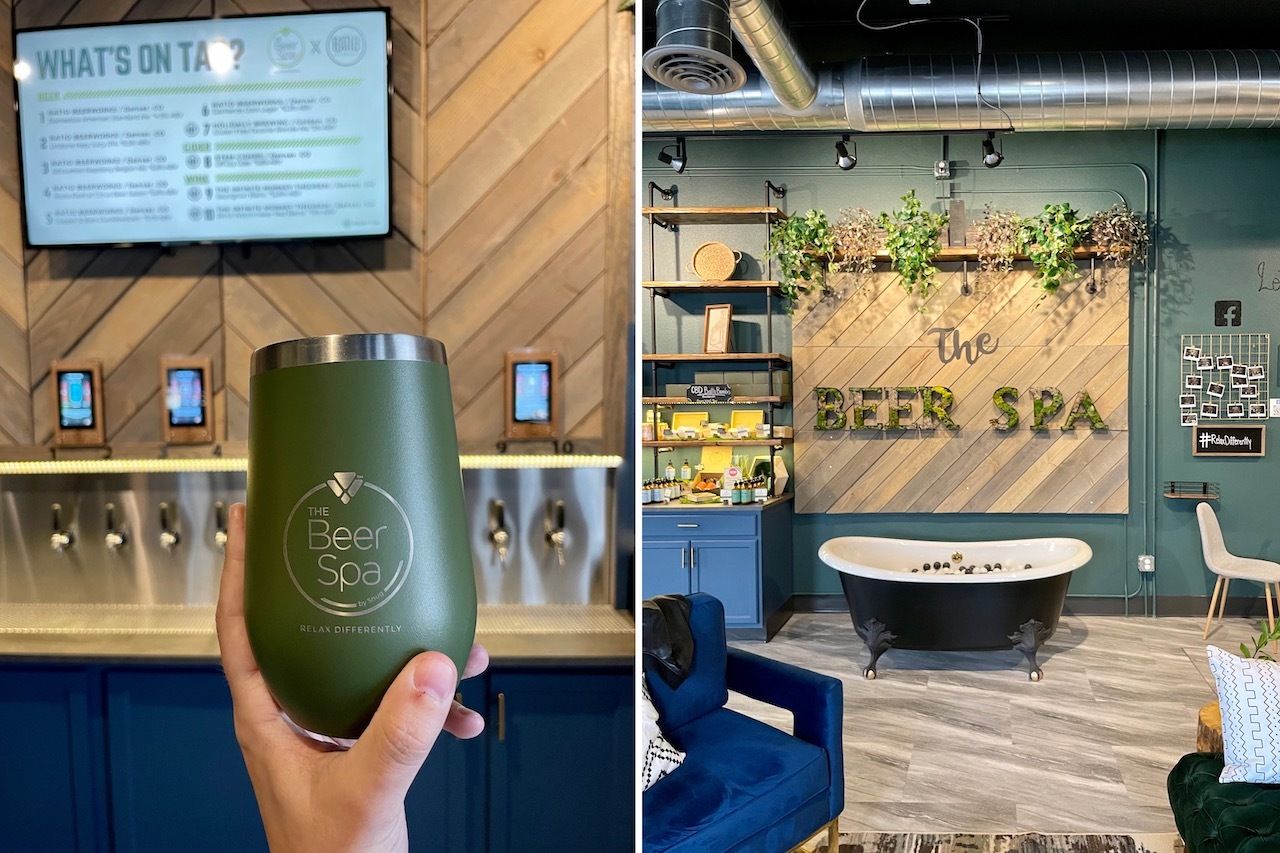 While the spa rooms need to be booked in advance, the front room serves more as a taproom lounge where people can come in without a reservation. The “snug” in The Beer Spa by Snug is a reference to the Irish meaning of snug: a place where you can enjoy a beer, relax, and read a book or chat with a friend or two. Zouaoui hopes it’ll become a thriving community spot with more space for gathering as soon as it’s safe to do so and COVID-19 restrictions loosen.

The massage room is likewise open for walk-ins, and features full-body massage chairs. These aren’t the massage chairs you’ll see in airport waiting rooms — they’re called zero-gravity chairs, and each uses a 4-D body scan to create a custom massage. Sitting in one feels like a four hand massage without any of the hands.

The spa’s biggest draw might be that the experience comes complete with a selection of locally made and beer-inspired soaps, lotions, and other goods. The Beer Spa by Snug seems to fit the stereotype of a certain Denver lifestyle. It’s also an unequivocally enjoyable place to enjoy local craft beer while embracing the slow pleasures of a spa day, outdoorsy beer-loving stereotypes be damned.

WellnessWhat Getting Naked at German Spas Taught Me About Community and Respect
Tagged
Beer Wellness Denver, CO, United States
What did you think of this story?
Meh
Good
Awesome