It feels a little strange eating a vegan pepperoni pizza in an old strip club.

In a place where smoke and strippers once ruled, I’m face deep in a pizza made with dairy-free macadamia nut ricotta, calabrian chili, and meat-free agave fennel sausage. The sweet and spicy pie seems like the best $20 anyone ever spent in this spot.

My pepperoni pizza comes from from Double Zero, one of two upstairs restaurants in Plant City, the first plant-based food hall in the world. It’s the brainchild of Providence plant-based investor Kim Anderson and chef Matthew Kenney, who’ve put four of the chef’s most popular restaurants in a classic old brick building near the Providence River.

At one time, the building housed an old-school steakhouse and a strip club. Now you’ll find offshoots of Double Zero — an Italian concept — Bar Verde (Mexican), Make Out Café (DIY bowls and baked goods), the first New Burger, and a Nitro coffee shop. Together, the restaurants aim to show the world that a plant-based diet can be just as delicious as a traditional one, and far better for the planet.

“All the transportation globally combined doesn’t equal the greenhouse gasses from animal agriculture,” Anderson says as we sit outside on Plant City’s sprawling patio. “So if you’re going to be involved in trying to reduce climate change, you need to show people sustainable food can be beautiful and delicious and served in a really cool environment.” 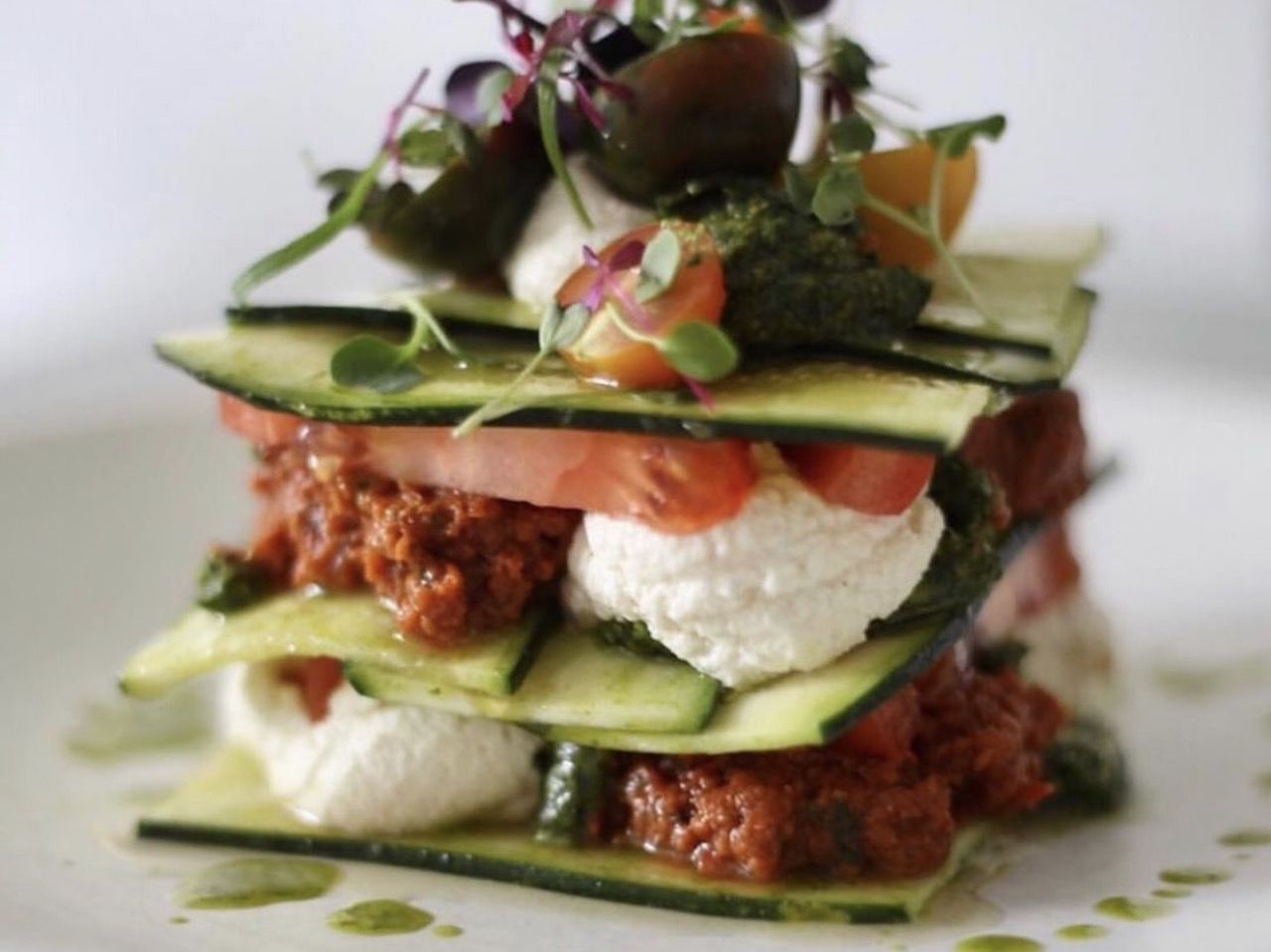 Her goal is working. After opening its doors in June, Plant City welcomed over 110,000 guests in just 10 weeks. And most of them weren’t vegans.

“It’s an idea whose time has come,” says Plant City’s executive chef Luis Jaramillo, who helmed the Ecuadorian favorite Fifty in Manhattan before coming onboard with Plant City. “Day after day I’d say 70 to 80 percent of the people we get in here are not plant-based eaters. It’s extraordinary.”

Still, news of a plant-based food hall spread quickly in the vegan community, and it’s become a major destination for those on an animal-free diet.

“For about an 80-mile radius, plant-based eaters drew a circle around this place as somewhere they needed to go,” Anderson says. “Our first weekend we had a gentleman fly in from Colorado who told us ‘Do you understand? I’ve been plant based for 20 years and I’ve been waiting for this.’ He got a hotel room and stayed three days because he wanted to try everything.”

An unlikely place for the mothership of plant-based eating 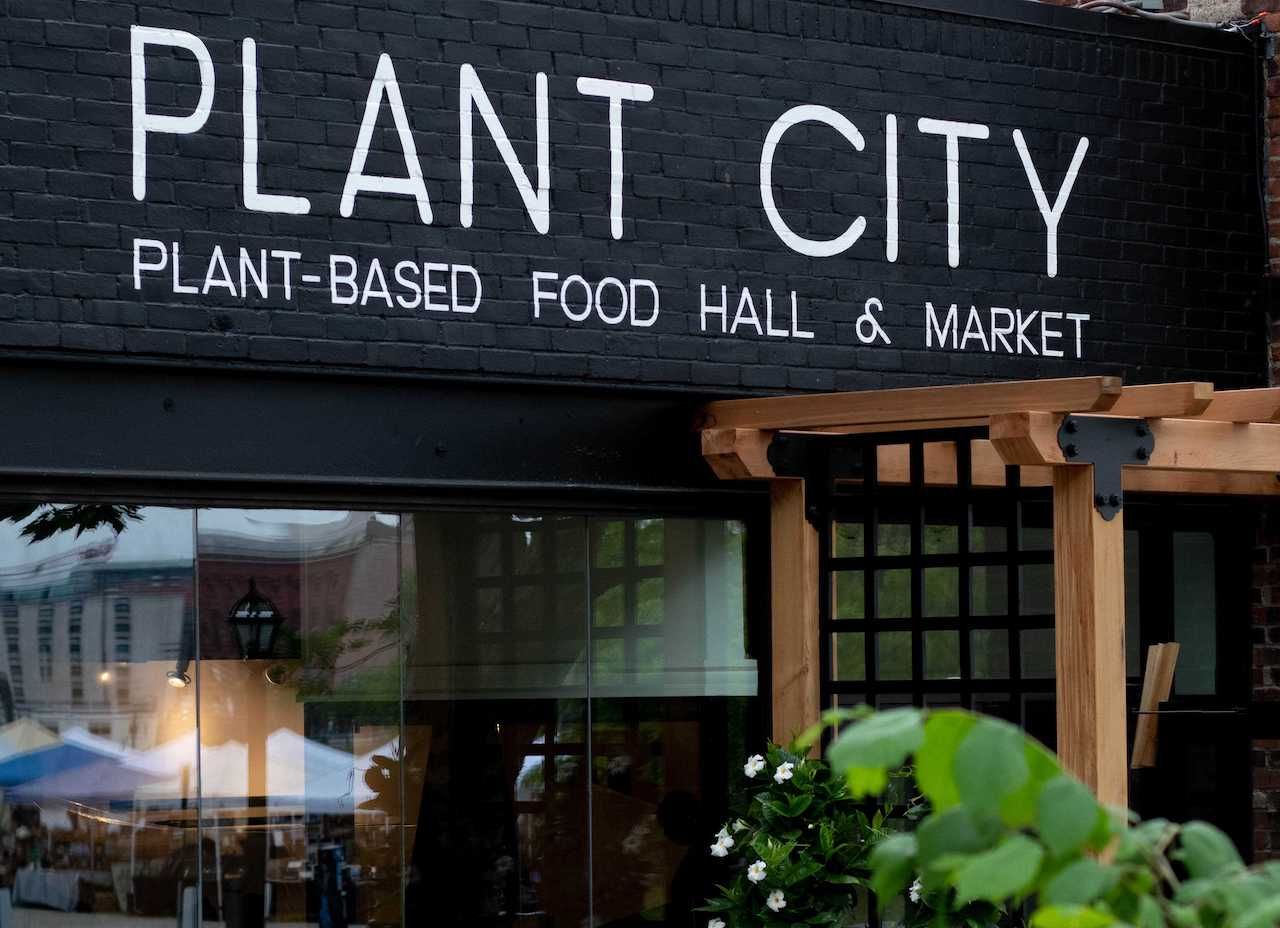 Providence, with its rich Italian history and a food culture based on rich red sauces and hanging pork products, doesn’t immediately seem like a place where locals would flock to a vegan food hall. But Anderson, a Providence native who knew Kenney through investments in plant-based businesses, envisioned this concept for her hometown.

“I would come home [from New York’s] Double Zero and say ‘oh I wish I had that lasagna,’” she says. “So I decided why don’t we take [Kenney’s] four or five best restaurants that we love and put them in this gorgeous building and show people what plant-based food can be.”

What it can be, at least at Plant City, is a big, bright space full of colorful foods that are, in many cases, better than the meat-based counterparts. The ground floor is illuminated by big windows and light wood, and in addition to food stalls, the area has a small plant-based grocery store with over 650 items.

The upstairs is the antithesis of its pole-dancing past: an open-kitchen restaurant that exudes cleanliness and class. The whole place gives off a California vibe of health and light one might not expect deep in New England. 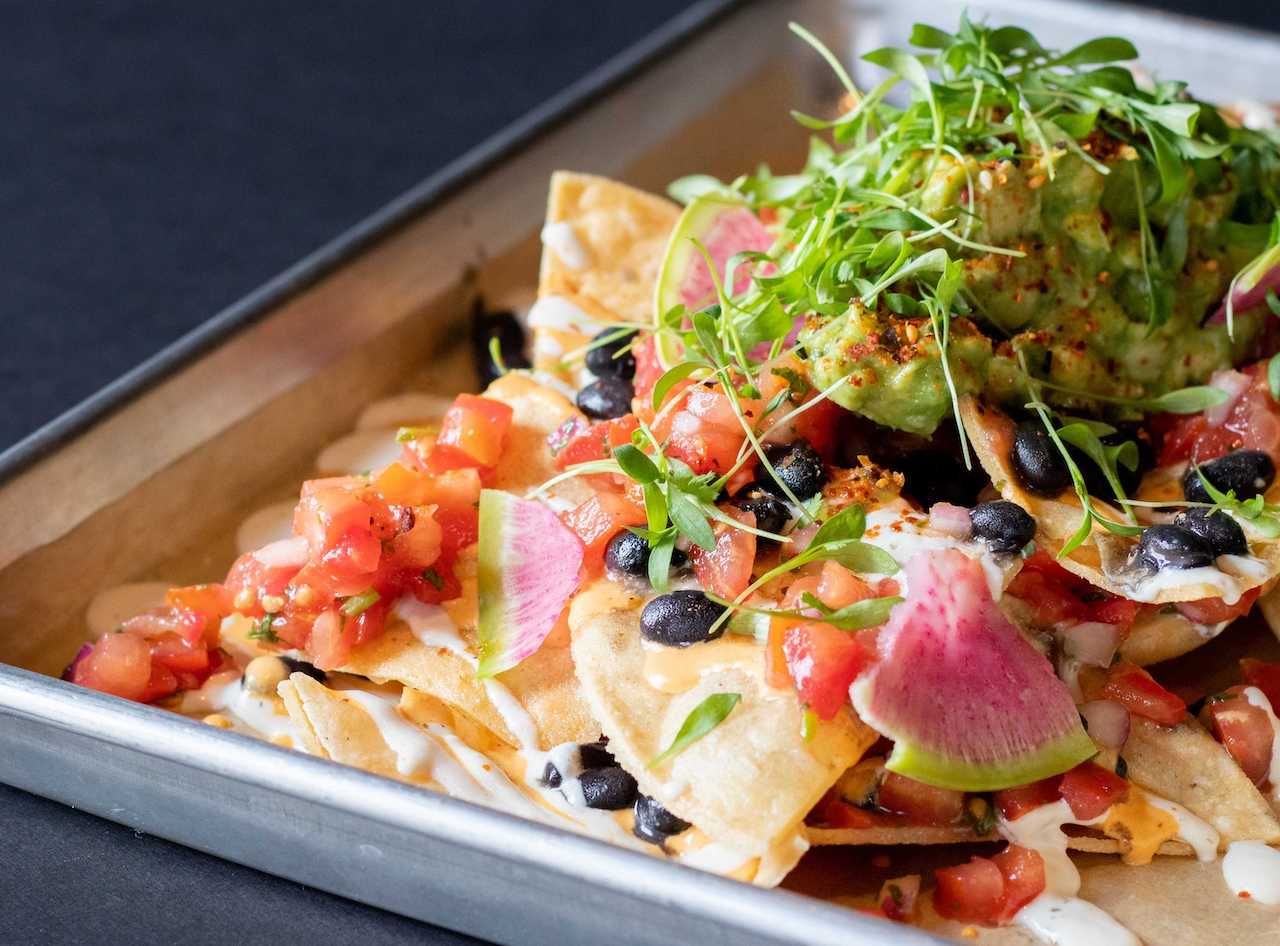 On a late-summer Monday, the crowd doesn’t look particularly plant-based either. A table of men in suits look to be taking a lunch break over bowls from Make Out. A few tables of women are enjoying white wine and vegan pastas. A couple sits with their dog splitting a big plate of nachos and flavored mineral water.

“People aren’t afraid,” says Jaramillo. “It’s still all based on flavor. They’re made with the same passion a meat chef will bring to his steak. So this may not be your typical steak, but you have the same sensation of having an outstanding dish. Just be open-minded and think of everything that comes with eating plant-based.”

After my plant-based feast I wasn’t exactly looking for another meal, but I didn’t feel like I was going to slip into a food coma either. Not that I’m converting to veganism anytime soon — I still ventured into Federal Hill later in the night for chicken parm — but it did show me that cutting meat out is not only possible, but probably preferable. And if this is what plant-based eating looks like in 2019, it’s not an unappealing option.

What to order at Plant City, the world’s first plant-based food hall

During the course of my afternoon at Plant City, I ate a cheeseburger, nachos, pepperoni pizza, a burrito, lasagna, a pop-tart, and a chocolate croissant. In a traditional restaurant, I would have left with an aching stomach. At Plant City, I left feeling pretty good. 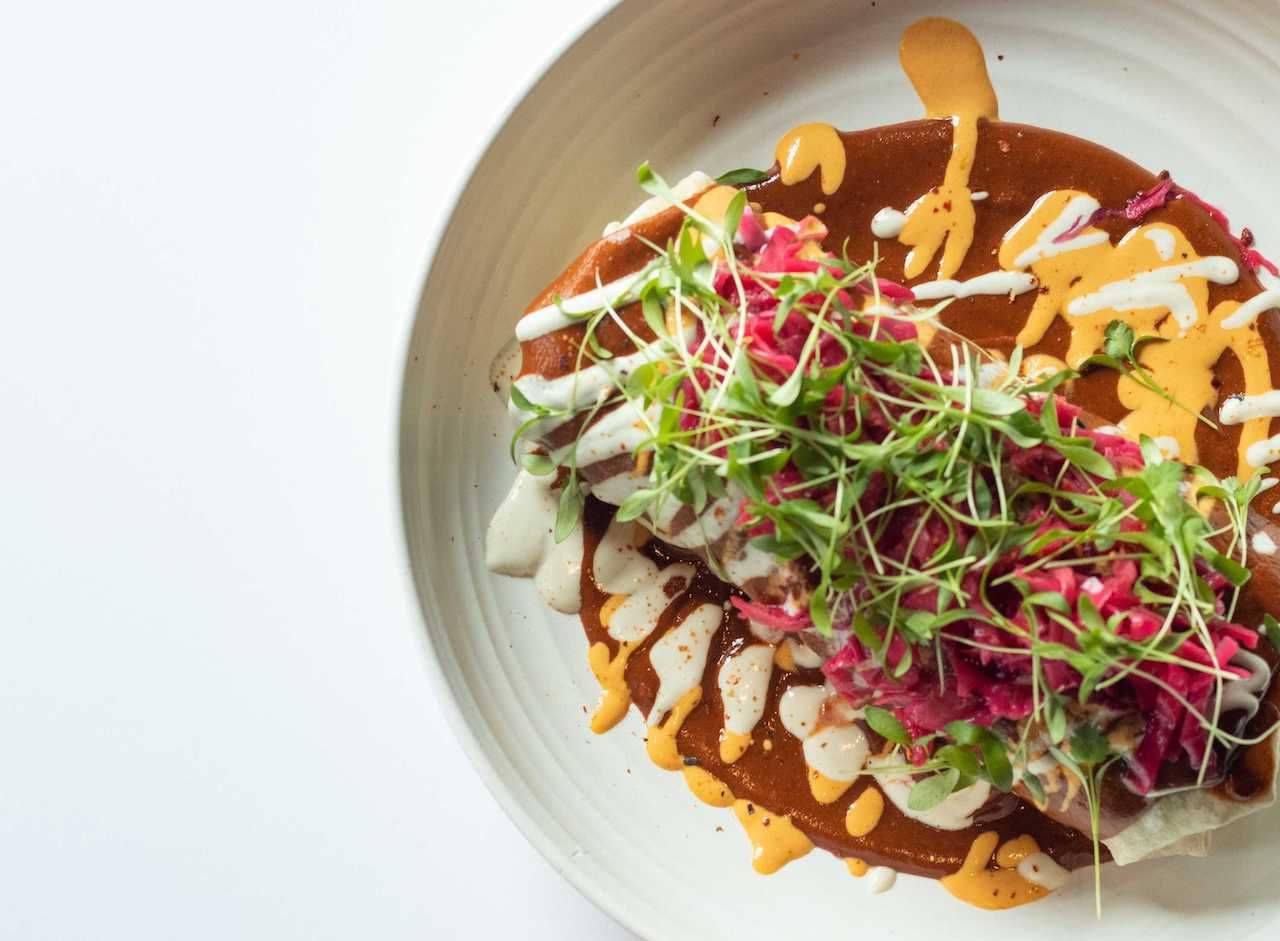 Bar Verde: The plant-based nachos from Bar Verde use corn chips shortened with oil instead of lard. It’s covered with a cashew crema that tastes more like a warm, light milk, and a butternut squash cheddar that gives a sweet, creamy flavor instead of a punch-you-in-the-face cheddar. I finished half the plate and didn’t feel even a little bit gross.

The scenic highlight of the meal was the burrito from Bar Verde which, frankly, tastes pretty much exactly like a vegetarian burrito you’d get at any burrito shop, except the mole and cheese dripped on top are plant based. If you’re just dipping your toes into the world of veganism, this is the perfect dish to start with. 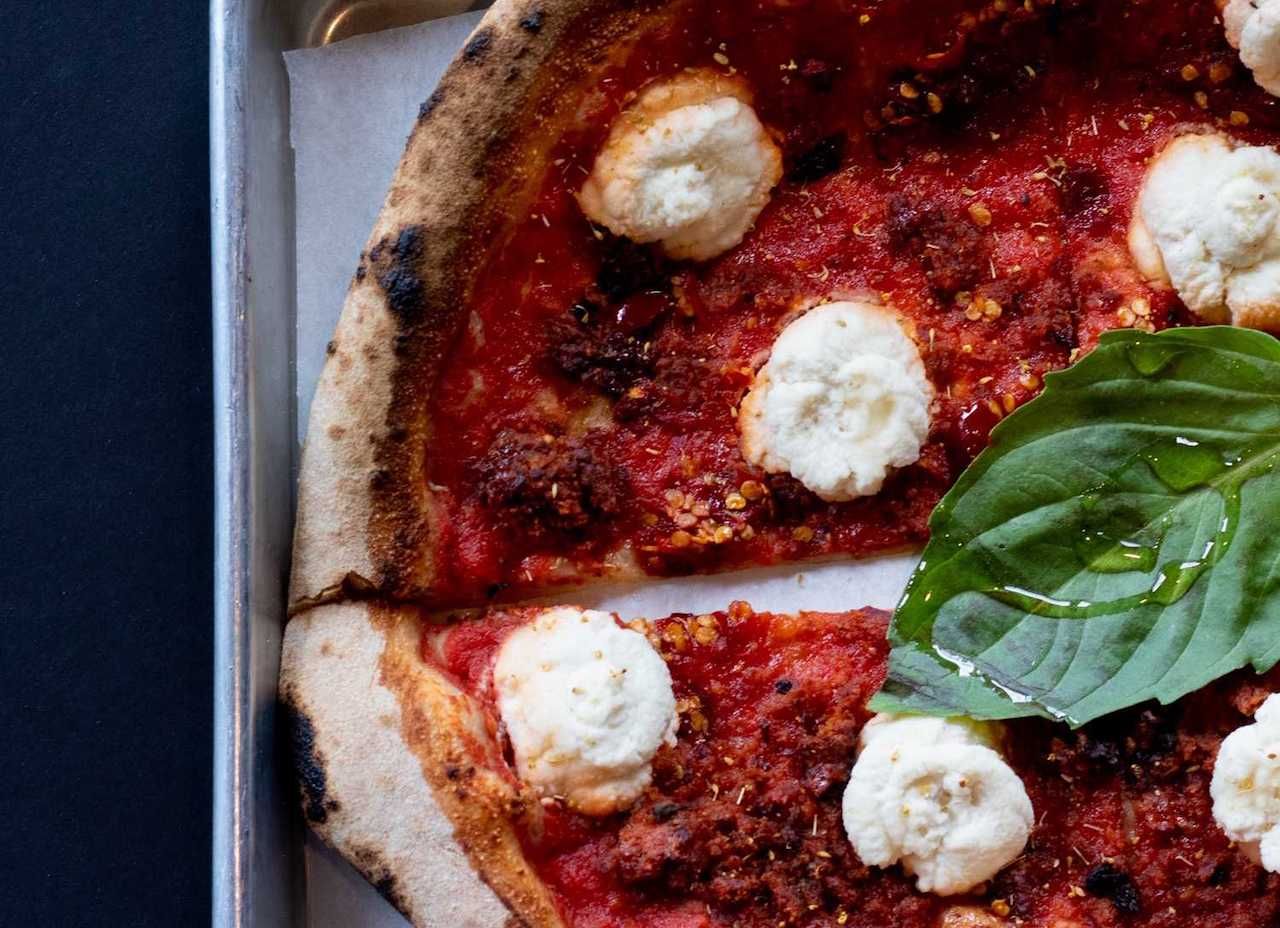 Double Zero: After the nachos I went for pizza, which had calabrian chilis that gave off enough heat to satisfy. The macadamia ricotta doesn’t add the gooey, cheesy consistency some love in a pizza, but between that and the agave fennel faux-pepperoni it makes for a spicy, saucy pizza that isn’t even a little bit greasy. An ideal choice for pizza-dabbers.

Calling the sun-dried tomato lasagna a lasagna was a bit of a stretch, in that it had no noodles or meat and looked a little more like an artfully-layered cucumber salad. Nonetheless, sun-dried tomato marinara is exactly as complex and smoky as it sounds, and when combined with the sweetness of a pistachio pesto and cool cucumbers it creates fantastic flavor mix in your mouth. 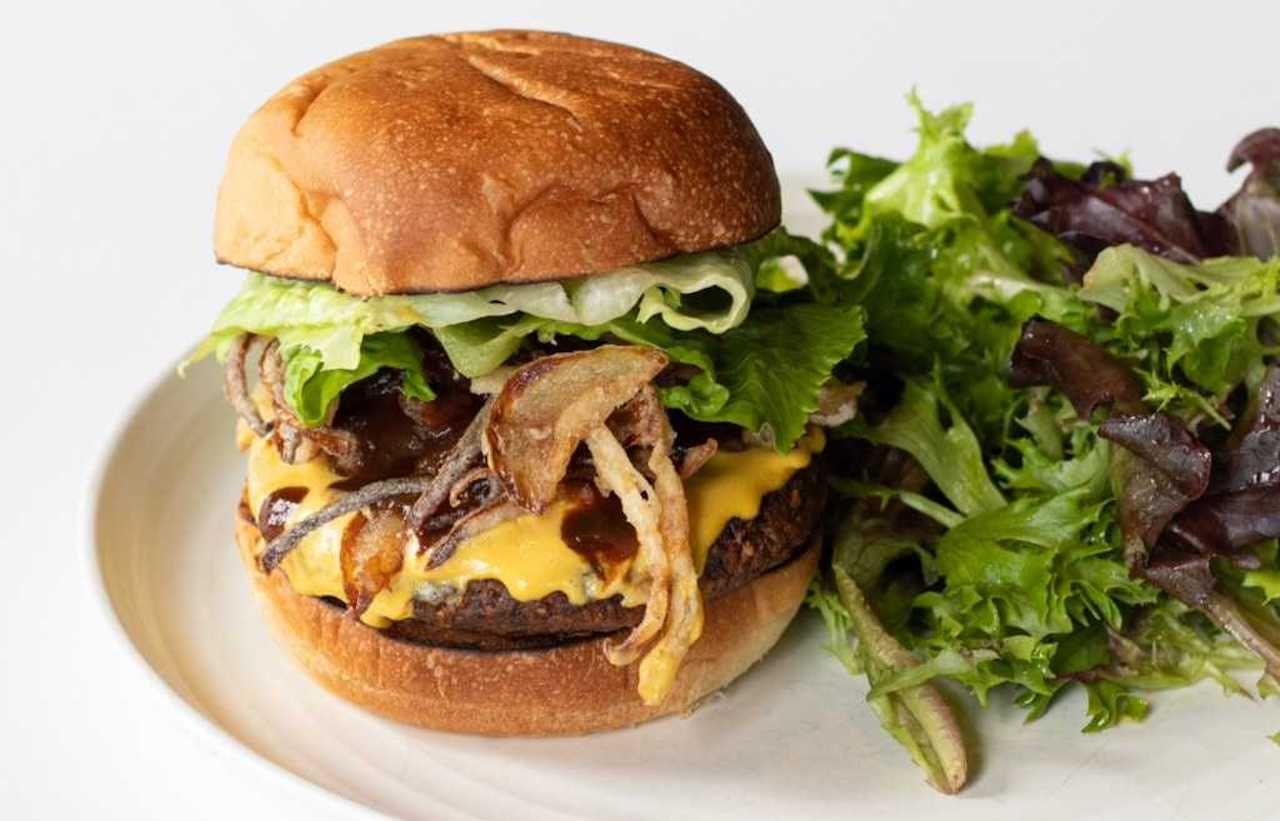 New Burger: The classic cheeseburger was the third item I tried. The reduced grease in both the vegetable patty and the butternut cheddar makes it smell savory instead of fatty. When biting in I got actual flavors — like the spices used in the patty and the sauce — and not a mouth full of fat like I might at Shake Shack. The burger fell apart almost instantly, though, as Anderson said they opted not to use any fillers. So plan on eating this one more like a Sloppy Joe. 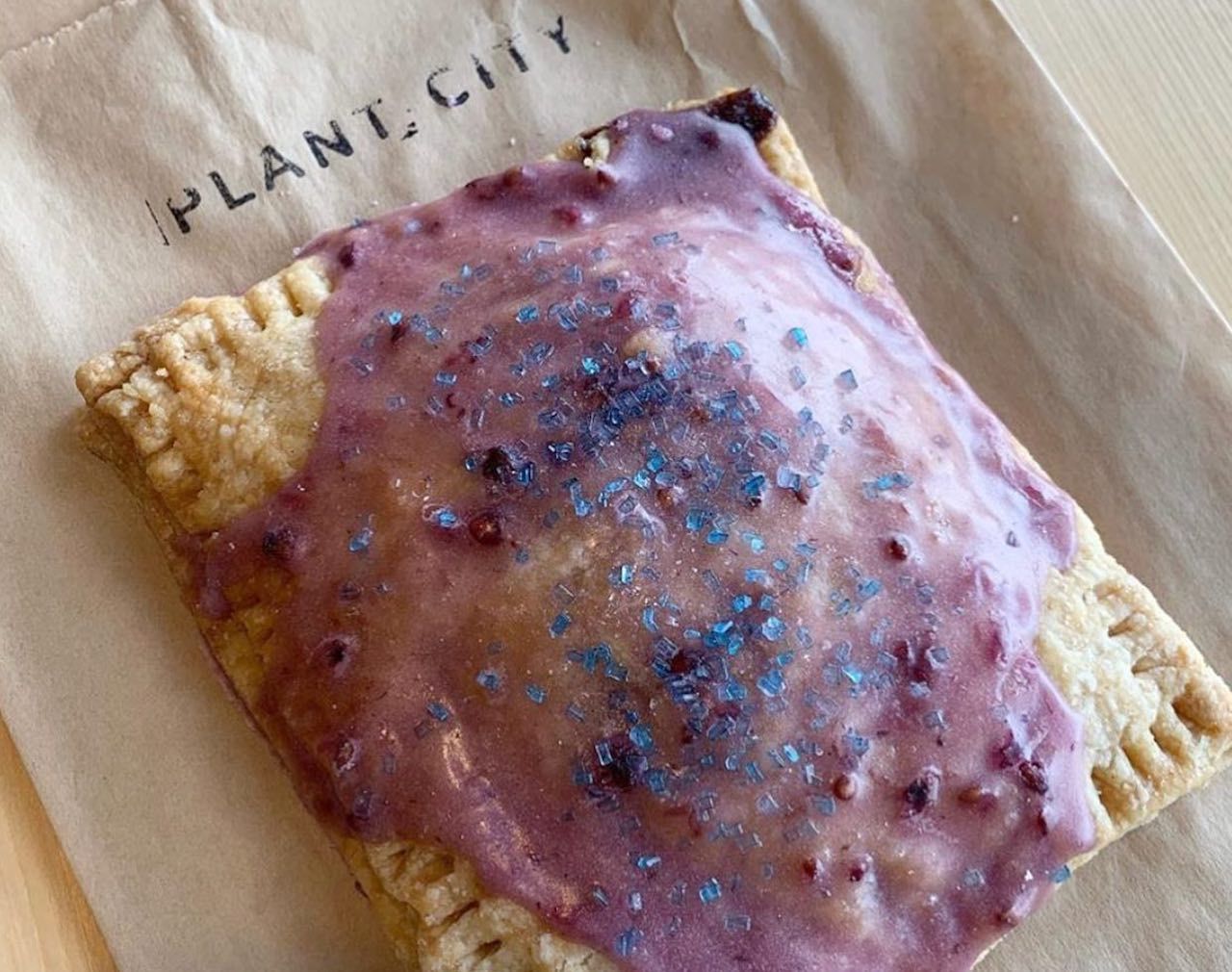 Make Out Café: The last things I tried were the plant-based chocolate croissant and pop tart, which have apparently been a godsend for vegans around the country.

“A lot of folks that are plant-based gave up on ever having a croissant or a pop-tart again,” Anderson said as I licked plant-based chocolate off my fingers. “So when word got out that we were serving these a lot of people started making the trip here for them.”

The croissant actually tasted more buttery than some traditional ones I’ve had, and the pop tart didn’t immediately taste like preservatives, which was new. Either of these could pass as full of butter or lard, but thankfully they were not. Though they didn’t weigh me down, Anderson burst my bubble by telling me the calorie count was about the same as traditional pastries.

VegetarianThe 50 Best US Cities for Vegans and Vegetarians
Tagged
Food + Drink Restaurants + Bars Trip Planning Vegetarian
What did you think of this story?
Meh
Good
Awesome