You’re probably familiar with durian. The Southeast Asian fruit regularly makes headlines thanks to its putrid smell, which is so strong that it’s banned on Singapore’s rail network, as well as many airports and hotels in the region. It smells so bad that it’s been known to ground flights. If you haven’t had the fortune (or misfortune, depending on your point of view) to encounter durian in person, think about what it would smell like to blend onions with sweaty socks.

Despite the stench, the spiky, football-sized fruit is easy to find in Southeast Asia because the taste of the custard-like inside is in a league of its own. On a trip to Kampot, the “durian capital of Cambodia,” I decided to push past the scent and try one for myself.

Set among farmland and rice paddies at the foot of Elephant Mountains, Kampot is an unassuming town on the south coast. It’s somewhat eclipsed by Sihanoukville’s beaches in the west and the capital city of Phnom Penh in the north. Despite a lack of natural attractions, Kampot’s colorful jumble of shop fronts, quiet streets, and artsy cafes make it a relaxing stop after Cambodia’s hot, traffic-choked capital.

I visited in late July, which is the end of durian season. The fruit was everywhere — neatly stacked in little piles on the side of the road, balanced on the back of fruit carts, and wrapped in plastic and stowed safely away on supermarket shelves. It’s also in the architecture. Kampot’s most distinctive landmark is a giant durian statue, which sits in the center of the town’s main roundabout beside the food market. 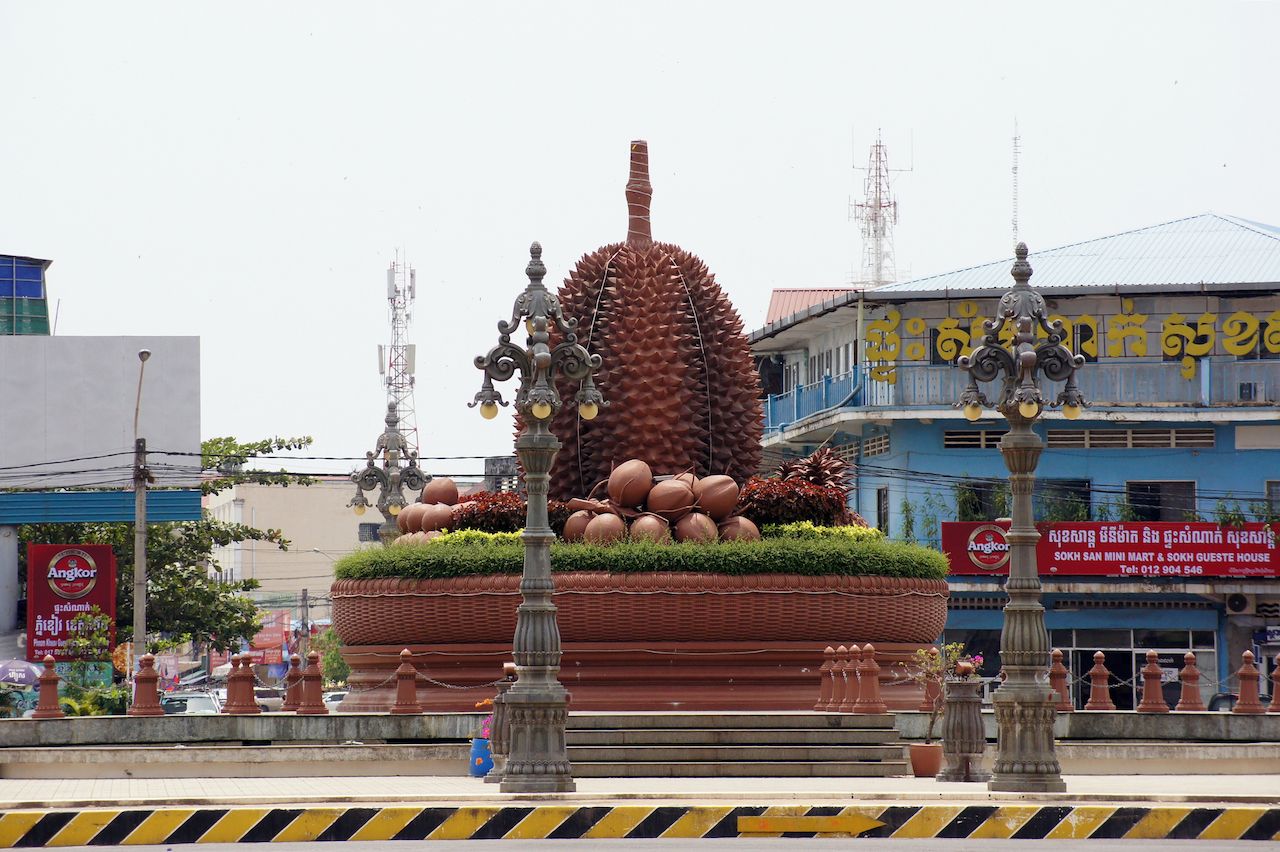 I entered the market and was greeted by colorful mats piled high with the spiky fruit. Prized specimens were sliced in half, exposing the custard-yellow flesh and letting the pungent aroma leak out and mingle with the smell of the chicken and fish being barbecued nearby.

I approached a woman surrounded by her produce and selected the smallest in the pile. After throwing me a bemused look, she hacked its shell apart with a cleaver and handed it over. Holding my breath, I reached inside and grabbed a segment out of the shell. It felt like a raw oyster, slippery as wet soap. And it stank.

Things went rapidly downhill from there. I pinched the slice too tightly, and it shot into the air before it fell onto my chest and then slithered down into my shirt, leaving a putrid trail in its wake. In horrified silence, I handed the durian to my partner and tugged the hem of my top until the slippery glob fell out onto the dusty floor.

I was plastered with a clammy trail of durian slime. My hands were sticky with it. I smelled like onions and dead things. The lady who’d sold it to me watched on, the corners of her eyes crinkled in amusement. I hadn’t even tasted it yet, and I’d somehow managed to coat myself in it. Even more determined, I reached into the shell again, pinched off a little more of the gooey flesh, and put it in my mouth.

I thought I’d like durian. Hell, I wanted to like it. Fans describe the taste as sweet, like banana and almonds, with a pleasant, rum-like warming sensation. I personally love strong-tasting food: blue cheese so ripe it’s almost melting, sauerkraut that’s fizzing in its own vinegar, whole anchovies straight from the jar — I enjoy it all. But the durian tasted how it smelled, only worse. I was done.

I gave the fruit to a nearby stall owner with the one segment missing. My Cambodian wasn’t good enough to explain the situation, but he got the gist. He beamed as I handed the spiky nightmare over to him, then stowed his gift away behind his stall. I left the market, scrubbed myself clean in a long, hot shower, and reflected on the experience.

Every food is not for every person. I personally wasn’t able to enjoy the delicacy, but by trying it, I was able to connect with the countless number of people who do. Maybe your experience will be different, and you’ll be able to find the elusive custardy goodness I seemed to have missed out on.

How to try durian for the first time 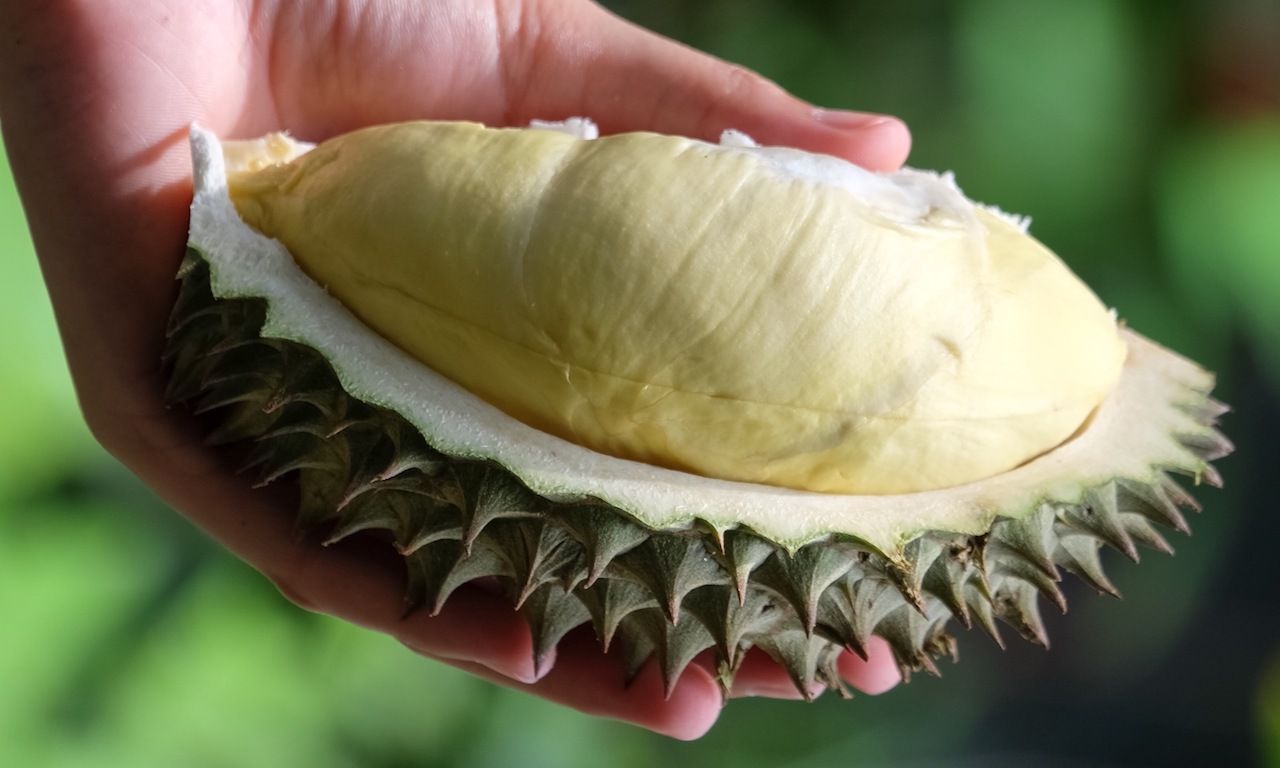 Approaching durian doesn’t have to be as disastrous as my attempt, and there are a few ways you can go about it.

First of all, don’t follow my lead. Start small and build up a familiarity with the flavor. Many East Asian grocery stores stock durian-flavored candy, cookies, and ice cream. Try one of these first. The absence of its raw smell makes it less of a shock to the senses.

Once you’re ready to tackle the real thing, do some research. The flavor varies depending on breed and ripeness. If you’re in Kampot, hire a guide and head out to the Teuk Chhou area, which is a spot known for its fresh, well-grown fruits and knowledgeable farm owners.

At the markets in Cambodia, the stalls you buy fresh durian from will hack the fruit open for you. It’s a little trickier if you’re on your own. First, make sure you pick a fresh durian by checking that the stem is a light color. Look along the side of the shell to find where the spikes start to go in on themselves (careful to avoid getting pricked). Use a knife to puncture and then pry open along the line where the spikes go in, as that’s where the seam of the fruit is. Pry it open. The edible portions are the pods inside of the shell, which have a soft membrane that’ll break open in your mouth.

Just be mindful when you’re plucking out a wedge to taste, lest you too end up with a trail of slimy durian down your chest.

Oh, and if you plunge straight in and eat the real thing, keep a toothbrush handy for afterwards. As durian fan Anthony Bourdain once explained, “Your breath will smell as if you’ve been french kissing your dead grandmother.”

Food + DrinkThe 9 Most Fascinating Fruits in the World and Where To Try Them
Tagged
Food + Drink
What did you think of this story?
Meh
Good
Awesome