The first woman to win the prestigious Pritzker Prize (2004) and to receive the Gold Medal from the Royal Institute of British Architects (2016), British-Iraqi architect Zaha Hadid has been one of the most influential architects of our time. Since the early 1990s, her work has transformed the skylines of cities all around the world, turning futuristic visions into iconic landmarks that often defy preconceived notions of what buildings should be.

Born in Baghdad, Hadid studied mathematics at the American University of Beirut before moving to London to specialize in architecture. Inspired by the work of Russian avant-garde artist Kazimir Malevich and the modernist movement of the 1920s, Hadid’s early drawings, which have been exhibited in retrospectives at the Guggenheim in New York, the Venice Biennale, and Russia’s State Hermitage Museum, show an approach of architecture that combines simple geometric forms to create highly dynamic structures. After completing her studies, Hadid joined the Dutch architectural firm Office for Metropolitan Architecture (OMA). The studio, run by Rem Koolhaas and Elia Zenghelis, reinforced Hadid’s appeal toward the asymmetrical, fluid shapes the world remembers her for.

Hadid’s ideas didn’t become reality until the 1990s, when her first project — the Vitra Fire Station, in Weil am Rhein, Germany — put her in the international spotlight. The angular, concrete fire station was followed in the early 2000s by buildings with curved structures that employ materials such as steel, glass, and titanium to create gravity-defying edifices. The focus on fluidity and lightness became a trademark expressed in buildings such as the Guangzhou Opera House in China, the Aquatics Center in London, and the Heydar Aliyev Cultural Center in Baku. Her work, however, wasn’t always exalted — some have criticized Hadid’s designs as examples of excessive exuberance, spectacular buildings that seem to value ostentation over functionality. The debate is still open.

Long before she passed away in 2016, Hadid was often referred to simply by her first name — Zaha — an accomplishment that few industry figures achieve. Her studio, which at the time employed 246 architects, had realized nearly one thousand projects over the course of three decades, and Hadid’s iconic style has been adopted by brands outside of the architectural world. Fashion-houses such as Lacoste, Louis Vuitton, and Swarovski have all launched products based on Zaha Hadid’s designs.

Zaha Hadid’s buildings are not the only legacy: she lives on as her London-based studio continues to work on new and unfinished projects. Before her premature death, Hadid was asked to design the Central Bank of Iraq. It will be the first Zaha Hadid building to be erected in the architect’s home country. After five years of work, the first section of the immense Daxing Airport in Beijing opened in 2019. The futuristic Zaha Hadid Architects’ project is set to become the world’s largest airport, able to sustain a flow of 100 million travelers by 2040.

With Zaha Hadid’s buildings now standing in 44 countries, experiencing the radical vision of Hadid is a journey that spans the globe. Here are seven of the most intriguing buildings designed by one of the most prominent personalities in contemporary architecture. 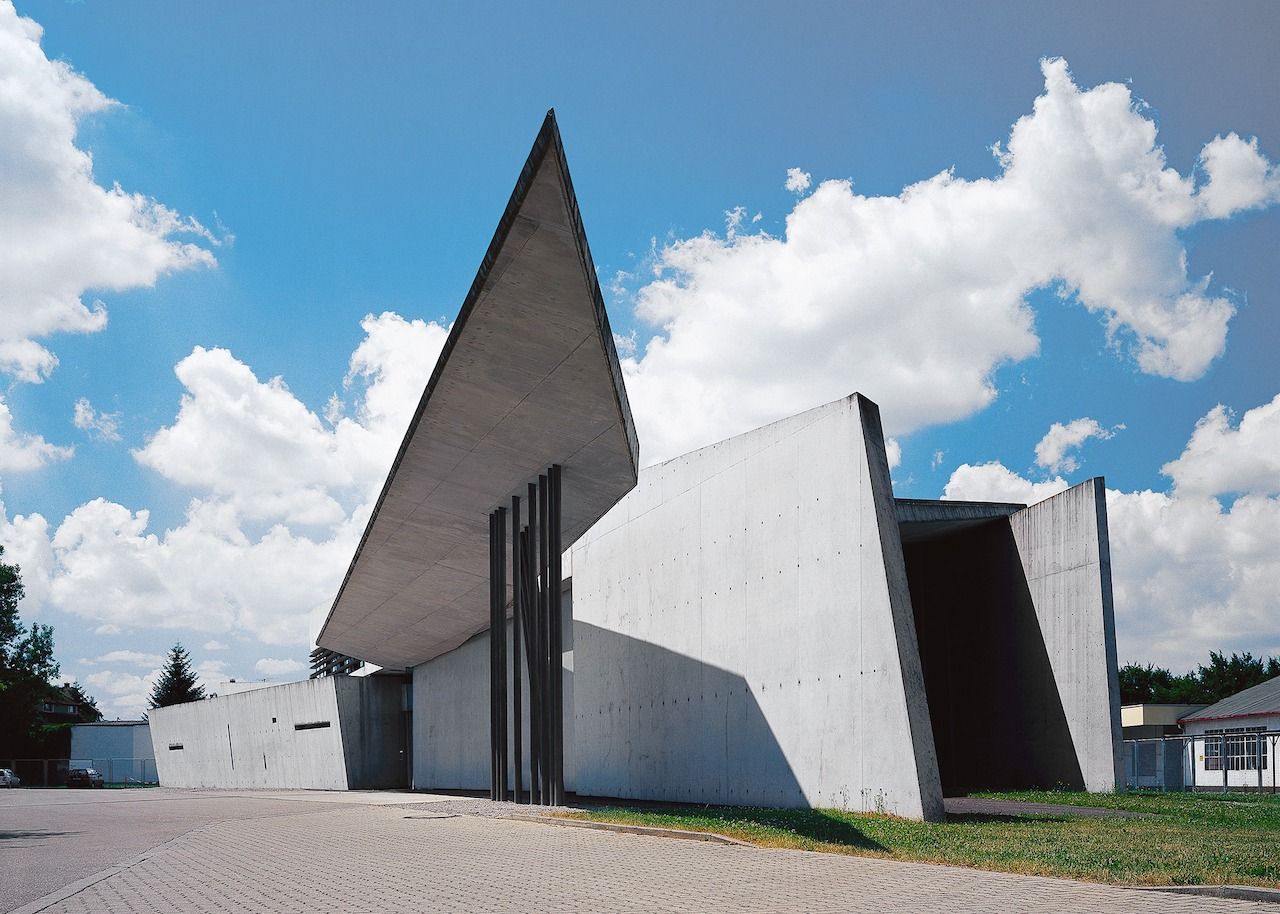 The Vitra Fire Station in the town of Weil am Rhein, in southwestern Germany, was the first of Hadid’s projects to come to life. Hadid had been drawing buildings since the 1970s, when the opportunity to design a small fire station appeared in the late ’80s. Built of exposed concrete and glass, the Vitra Fire Station is characterized by a series of oblique planes that intersect, forming a long, narrow structure made of sharp-edges and voluminous blocks. The building never served as a fire station. Government requirements changed before the completion of the structure and it was later transformed into an exhibition space. 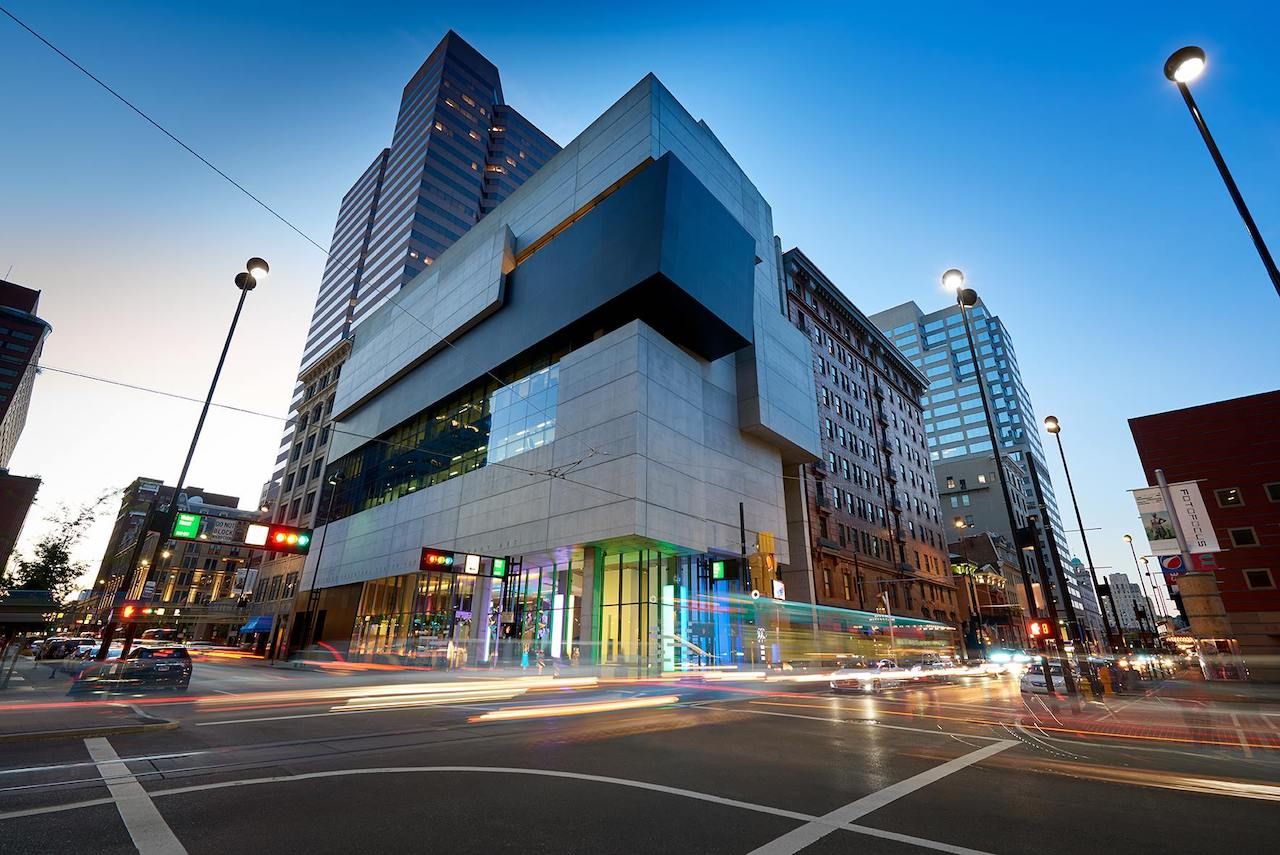 Cincinnati’s Contemporary Arts Center was the first major art museum in the US to be designed by a woman and also Hadid’s first project on American soil. The bold, blocky building sitting at the corner of Walnut Street and East Sixth Street features a ground-level lobby enclosed between glass walls and connected to the city through an “urban carpet” extending to the outside and blending with the street. From the exterior, the galleries on the upper floors appear divided into individual, voluminous blocks that extend horizontally but, in fact, when walking inside visitors find that the building is designed to allow vertical movement through all the sections of the museum. 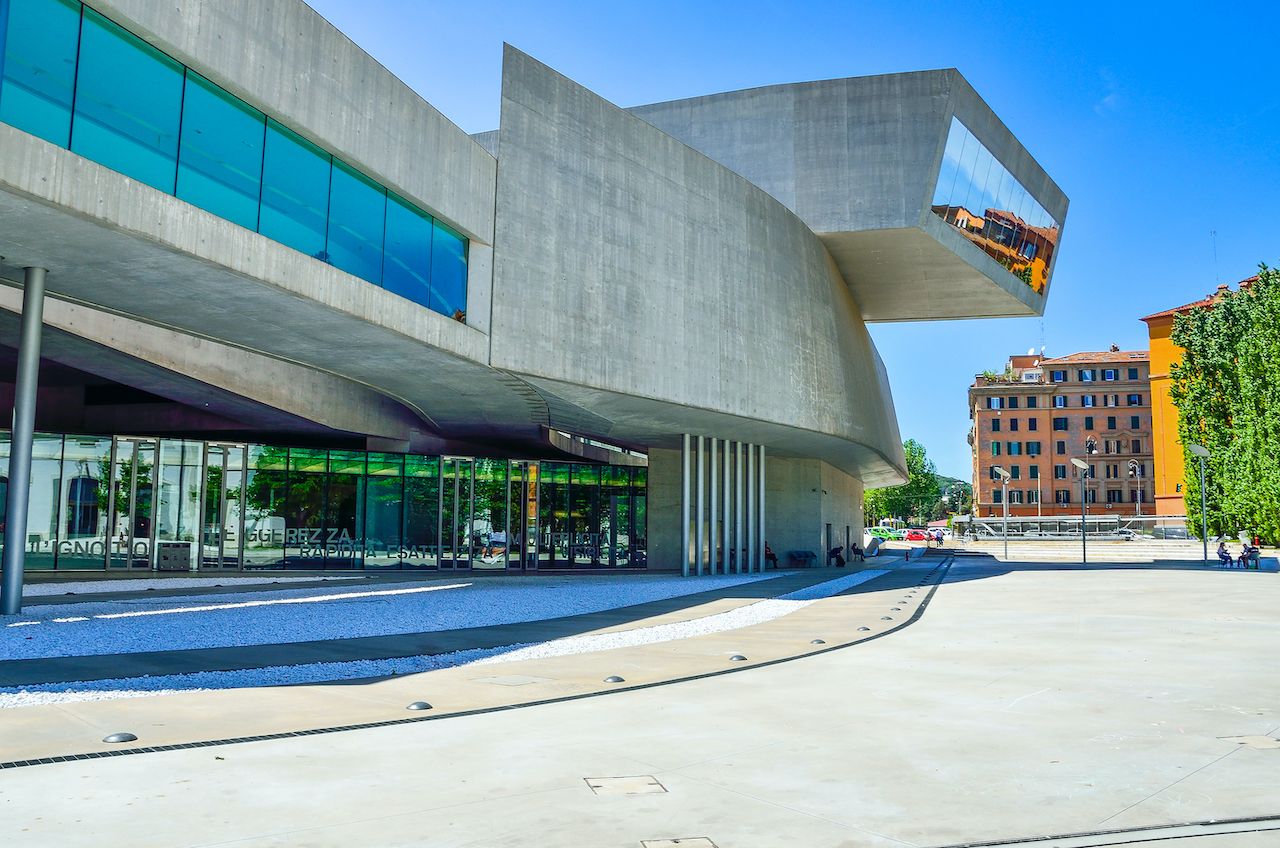 Located in a former barrack in Rome’s Flaminio district, the Maxxi Museum hosts a rotating collection of 21st-century arts in a sculptural, complex building, considered an icon of contemporary architecture. Zaha Hadid’s design won among 273 proposals and took almost 10 years to complete. MAXXI is now a multifunctional space where winding paths and suspended staircases connect the various floors and light-filled exhibition rooms. When describing the feeling of entering the MAXXI Museum, New York Times architecture critic Nicolai Ouroussoff said that “its sensual lines seem to draw the energy of the city right up into its belly, making everything around it look timid,” acknowledging that even in the eternal city of Rome, a modern design can complement the historical atmosphere. 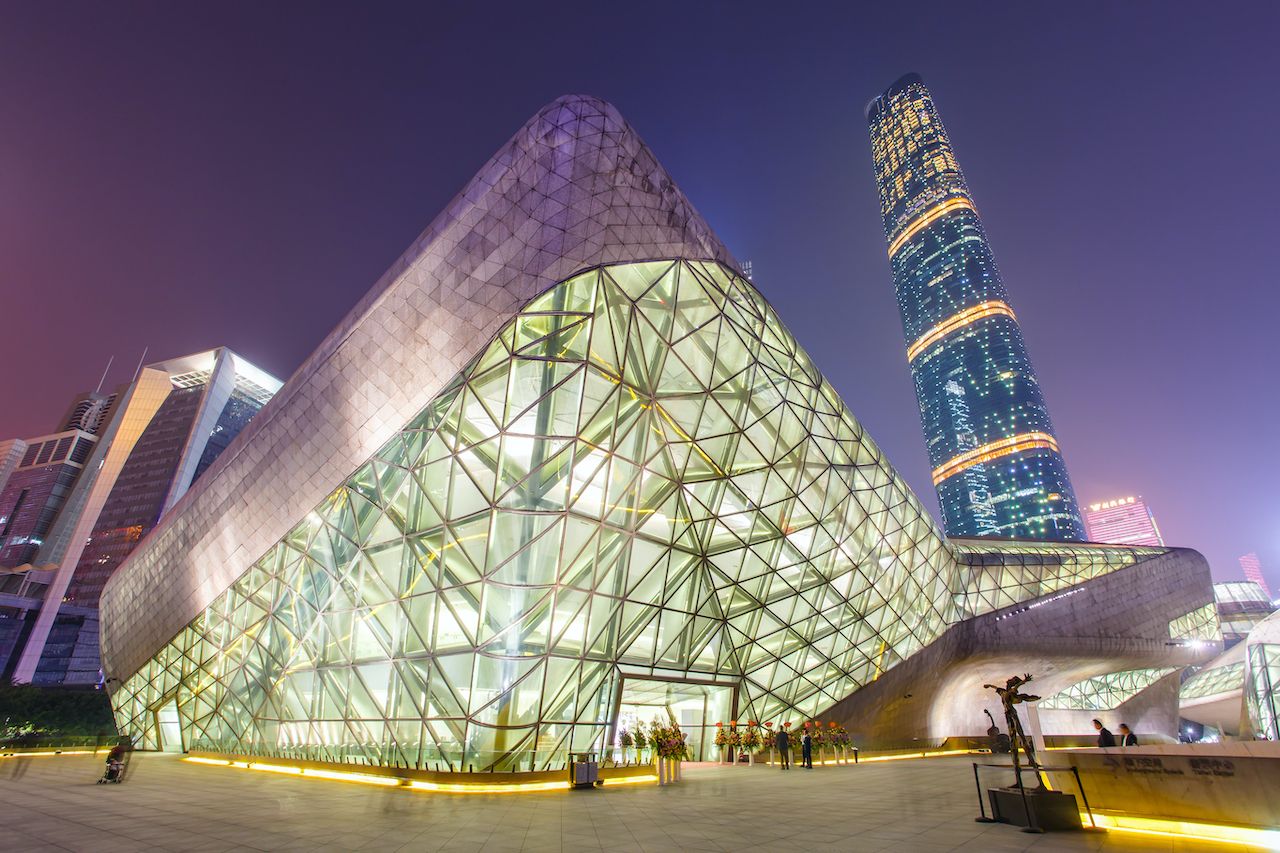 The Guangzhou Opera House blends concrete and fiberglass to create a 750,000-square-foot complex that can seat over 2200 people across two auditoriums. The Opera House, meant to open for the 2010 Asian Games but delayed due to a fire, took seven years to complete and is now the heart of Guangzhou cultural district. The structure is meant to resemble two river pebbles with an irregular, slightly rounded shape, balancing a futuristic, high-tech look with the natural feel of rocks lying by the water. The exposed steel frame encloses the vast expanses of glass that allows the sunlight to flood the interiors during the day and the indoor artificial lights to shine outward at night. 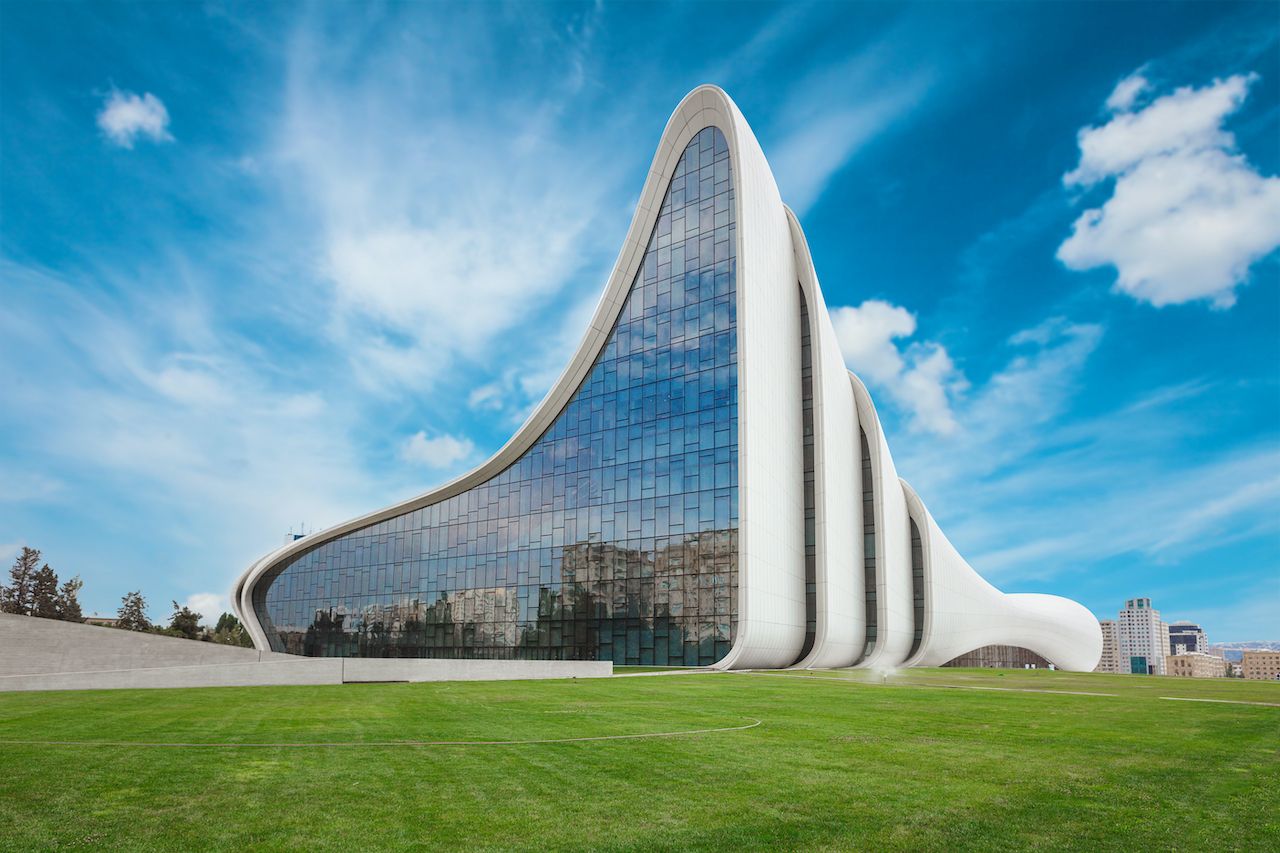 Following the collapse of the Soviet Union in 1991, independent Azerbaijan has invested heavily in the modernization of its infrastructure and architecture, gradually introducing cutting-edge buildings into its skyline as a result of the oil boom that occurred in the 1990s. Zaha Hadid’s Heydar Aliyev Center is the best-known example of Baku’s post-Soviet transformation. The abundance of curves that make the cultural center look liquid are a feat of modern engineering and technical ingenuity, and, of course, a representation of its designer’s extraordinary creativity. 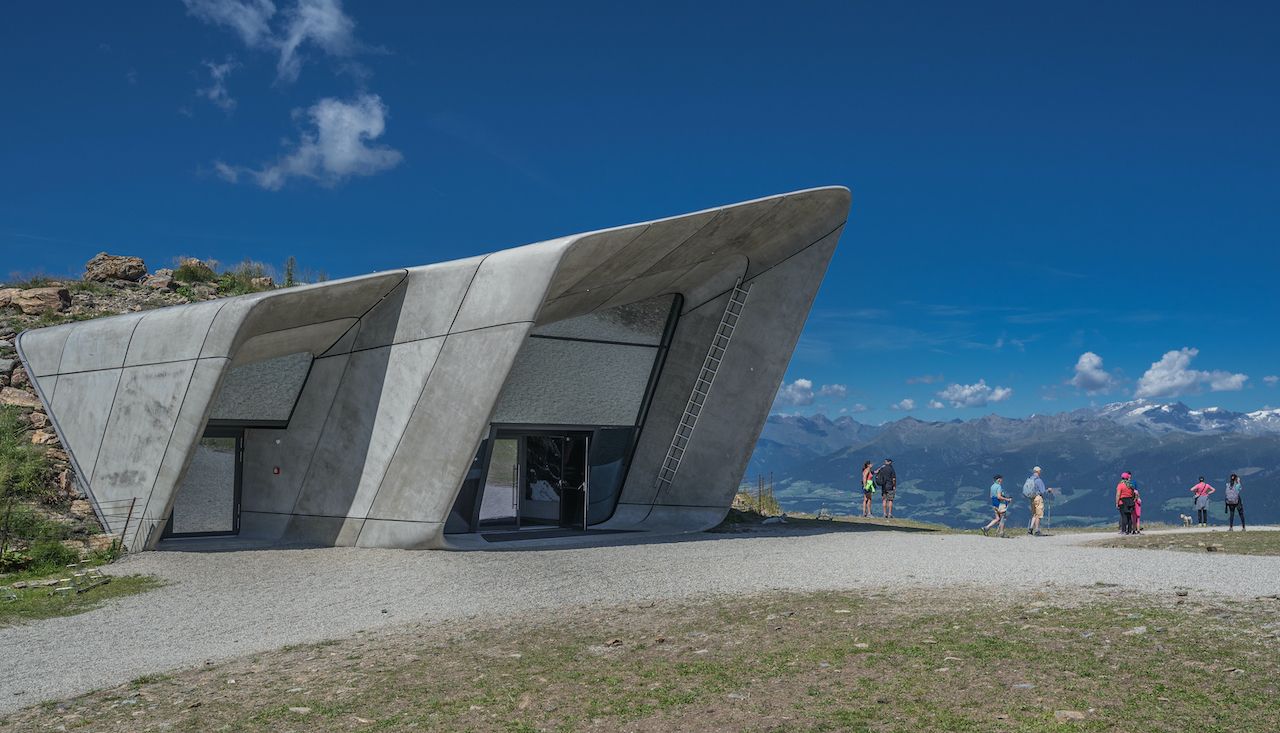 Situated at the top of Mount Kronplatz, at nearly 7,500 feet above sea level, the Messner Mountain Museum is located in the heart of Tyrol’s best-known ski resort, Plan de Corones. Concrete is the dominant material, used to create a structure that merges with the mountain itself, blurring the line between nature and construction. To build the museum, which hosts a permanent exhibition dedicated to the history of mountaineering set up by legendary climber Reinhold Messner, each component had to be transported by truck to its current location and added to the complex in harsh weather conditions. The museum expands mainly underground — only a fraction of the structure can be seen from the outside. Hadid designed it this way to minimally impact the landscape and create an energy efficient space that takes advantage of the land’s insulation. 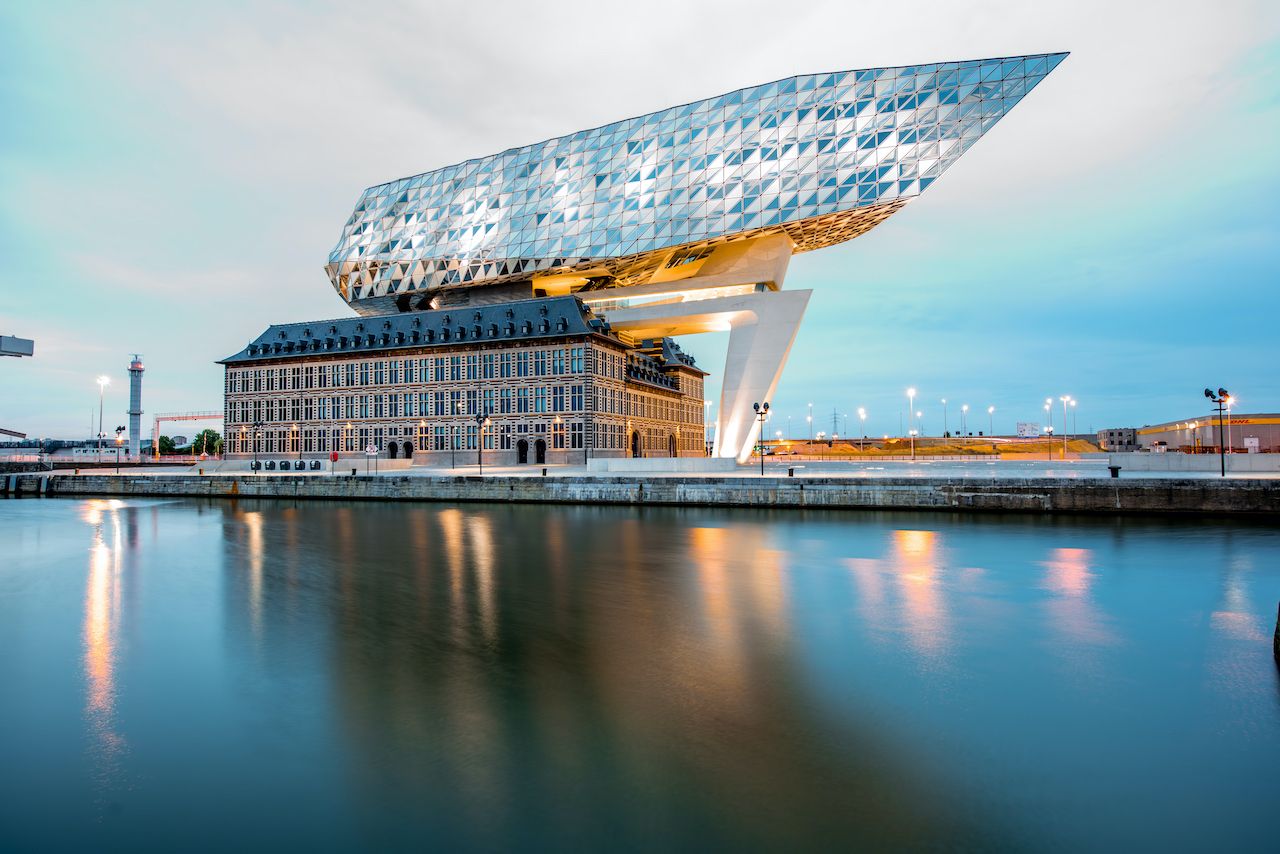 The port of Antwerp handles over a quarter of Europe’s container shipping and employs over 60,000 people, with plans of further expansion. The development of the Belgian city has included Hadid’s Port Authority buildings, an angular, glass cloud that seems to hover on top of a former fire station, converting it into the new port’s headquarter. The project required the original building to be preserved, so Zaha Hadid Architects decided to combine the new and the old, adding a floating multifaceted glass structure that reflects the colors of the sky to a perfectly symmetrical palace recalling 16th century architecture.