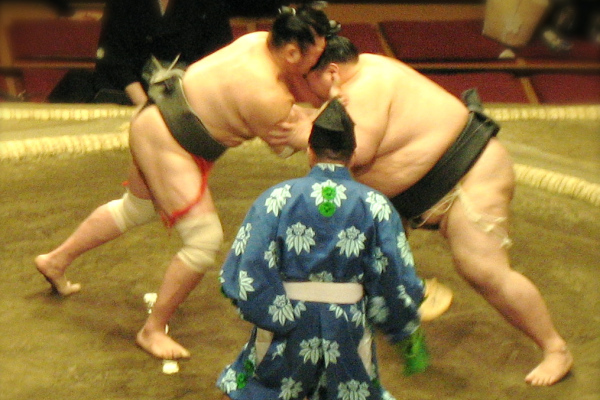 You’ve got the body for sumo (or so you’re friends joke), and you know that wrestlers have celebrity status in Japan. Pele Omori breaks down what to consider before you quit your day job.

1. You’ve got the right body

Sumo wrestlers are no couch potatoes. Underneath the fat lies the muscle required to thrust a heavy opponent out of the ring. Japanese sumo school recruiters often turn down the obese and sedentary, in favor of large-boned and fit candidate. The right body is one which can tolerate the rigorous discipline of daily training.

Sumo in Japan adheres to strict Shinto traditions that forbid females from participating in the sport or even entering the ring. However, the USA Sumo Association does allow women to compete in its tournaments.

3. Putting on a few pounds doesn’t scare you

Professional sumo wrestlers can be as heavy as 400 pounds. Japanese sumo schools will help you get there by feeding you well.

Wrestlers in sumo schools eat two large meals a day of chankonabe (a meat, fish, and vegetable stew), rice, and beer. They take siestas to slow down their metabolisms, facilitating the conversion of large amounts of food into body fat.

It’s also common for wrestlers to receive massages, which are believed to expand their stomachs and allow them to consume even more food. 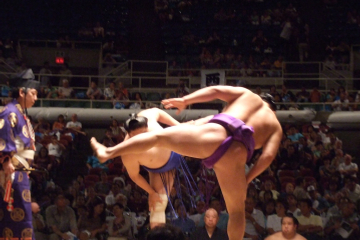 The heya, or live-in sumo schools, are no vacation. Wrestlers enter as members of the jonokuchi division, at the bottom of the sumo hierarchy.

Training begins at five in the morning and continues into the afternoon, with a lunch and siesta break in between. In addition, students have other duties, such as attending to the needs of the higher ranking students, cleaning, and doing various chores.

In sumo matches, the winner is the one who pushes his opponent out of the ring or causes him to hit the floor with any body part besides the feet.

A wrestler’s daily drills include the butsukari geiko, an exercise which involves repeatedly whamming his body into an opponent’s chest as he attempts to slam the wrestler to the ground, and body-slamming wooden planks.

Sumo wrestlers may appear far from flexible, but they have to have limber bodies in order to move out of the way of their opponents. The matawari, or side splits, is practiced daily by wrestlers.

7. You don’t mind sporting a samurai ‘do

Sumo wrestlers are expected to wear their hair in a chonmage, an Edo-era samurai ponytail, at all times. Tradition says that sumo wrestlers without a chonmage have left the sumo world for good. 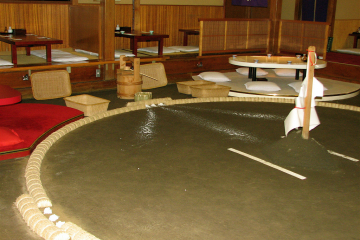 8. You’re comfortable in a loincloth

You may cringe at the sight of wrestlers being hoisted in the air by the seat of their loin clothes, but it could happen to you.

Sumo wrestlers’ loin cloths, or mawashi, can weigh as much as eight pounds—heavier than you might expect. To get the feel of it, you can purchase one from e-sanpuku.co.jp. The long garment has complicated tying instructions, so have a friend help you put it on.

Rising above the entry-level rank takes years of practice and dedication. According to USA Sumo, most recruited wrestlers drop out within their first year.

10. You don’t plan on becoming a centenarian

Years of being heavy can eventually take their toll, even after the end of a sumo career. In comparison to the rest of the population, wrestlers’ run a higher risk of suffering heart disease, diabetes, or strokes. It takes most former wrestlers approximately six years to lose the weight they gained at the start of training.

Wrestlers’ careers are short, so it helps to start young: most professionals are recruited around age 15, and many retire by their thirties.

Still want to give pro sumo a go? Prepare for your move with 10 Japanese Customs You Must Know Before a Trip to Japan.

What did you think of this article?
Meh
Good
Awesome
Bookmark
Posted In
Travel
Destinations
Japan

From sacred deer to mochi, Nara deserves a spot on your cultural tour of Japan