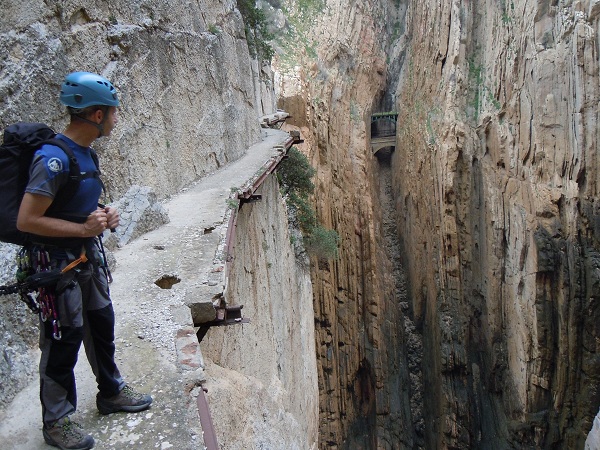 Nowhere to go but forward. All images by the author.

IF YOU’VE HEARD OF the Caminito del Rey in Málaga, Spain, it is probably because it’s often referred to as “The World’s Most Dangerous Walkway.” It is blogged about from afar, with pictures taken from what seem to be impossible angles by death-wishing photographers. To trek it, you imagine yourself cringing or flattening yourself against the wall like a living shadow.

This is what I expected after my initial Google search. Instead, what I found was more akin to an exercise in meditation than any simple thrill, and what I experienced was a different way to walk El Caminito, one that took six steps. 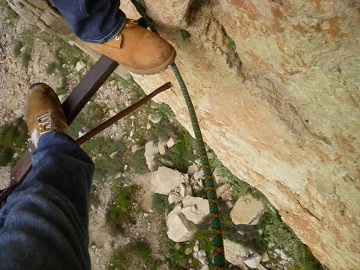 My first step of the Caminito del Rey is more of a jump. Although nothing rushed past me and there is no feeling of free-fall in my gut, blood still rushes to my head as if I am being plunged downward, and my narrowed focus of vision makes everything seem like it’s happening quickly.

But I am completely still. I step onto the one-and-a-half inch thick iron rod extending from the tanned limestone. My guide mentions something about looking for 200 million-year old ammonites on the walls, and I almost think about looking for one. I accept that I have to look down in order to do this and am greeted with the sight of a sheer drop to a rocky riverbank below.

I am hugging so close to the wall, I breathe in some sediment and some of those ammonites. Not a chance of footing. I feel like the wall is plotting to kill me, but this is not that surprising.

In the early 2000s, after two incidents of ill-equipped and/or drunk people falling to their deaths, the government destroyed the walkway from our initial segment to deter meandering hikers and tourists in nearby El Chorro. My group’s presence shows that making the walkway more dangerous also made it more interesting. 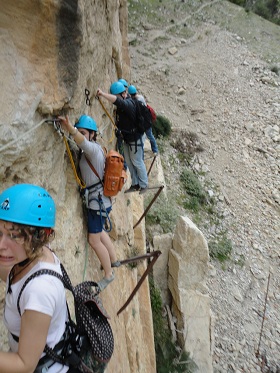 There’s no fast or slow at the entry point–you don’t have a choice but to dangle from a carabiner atop rods that seem better suited for hanging flower baskets. This is probably the closest a human could get to levitating or to being a flamingo, poised on one steady foot at a time.

2. Step with your hands.

On the Caminito del Rey I am a four-legged animal. I use more care with every step, but the movement of my legs and feet feel secondary to that of my hands and arms.

The nine-foot long, two-inch wide “bridge” that made us all raised our eyebrows appears even smaller than in the pictures. I put my hands out against a steel wire, and sure, if I slipped, my via ferrata harness would catch me–wouldn’t it?

“You’ve gotta lean in on it,” my guide says while I reach for the wire. Gravity feels like its both down and sideways, and I’m re-calibrating my weight with every move.

From the other side, I’ll want to take some photos of Meg, the shortest in our group, who can barely reach the distance to the wire. The rain picks up, and she is now a slick spot away from falling, and no one says anything. I don’t take the picture.

Once I’ve settled into my small space adjoining the gorge, my nerves calm while the feeling between my head and chest pulse with energy. Adrenaline is a cheap word these days, but I am sure it’s here. 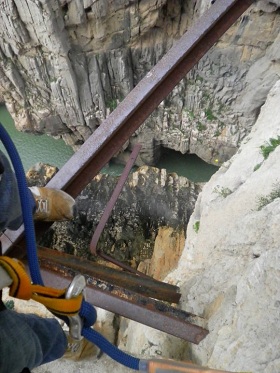 The absence of fear and doubt is strange, almost worrisome. I look across the valley to the train tracks passing through the mountain where trespassing backpackers look back at me. We wave, fist pump, and fill in the captions of their mouths moving in silence.

At the beginning there was an urgency to move forward–not the least because we were held so high in the air with so little grounding.

But now, with even less support from the harness, I think of tightrope walkers who must at some point widen their focus from action to observation and take note of just how good it is to be so high above the rest.

I hadn’t heard of the Caminito del Rey until the chatty owner of a smoothie bar in Gibraltar mentioned it in passing, still buzzing from his own trek the day prior. “I’ve been all over Europe, mate. To the Alps, to Italy, to Croatia. I’m tellin’ you this beat’s ’em all!.”

He showed me a picture of himself and one of his friends, both of them cheesing it while another trekker crosses the beam with anxiety clear across his face.

During my day out, we encounter several other groups of hikers and climbers, but no individuals, except a few loners passing through the stream and train tracks below. Going with one or more friends isn’t just safer, but watching and encouraging someone you know go after–or before you–adds an element of understanding and support to the Caminito that can’t be acquired alone. 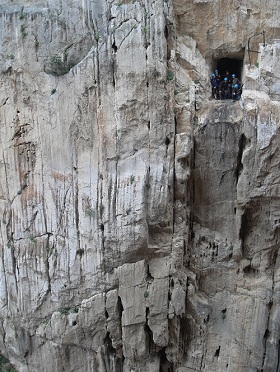 “Physically, anyone can do this. It’s the mental part that isn’t possible for everyone,” our guide says while handing out helmets and rope. Prior to this day I had sent a Facebook message out to my group of friends, all of us ESL teachers in Andalucia, about planning a trip to do this trek, with fear-inciting links and all.

They all agreed, but not everyone checked out just what El Caminito del Rey was beforehand.

All of us were nervous, only a few of us actually admitting it. Those that stayed quiet seemed the most shaken, which they confirmed later on the ride back to Gibraltar. Though a full-day trek with six people lasted about 7 hours, my mind’s steady demand for adrenaline rarely abated, even during lunch, which we ate safely on a grassy knoll by the creek.

Our guide told us that it’s not unusual for people to begin vomiting or getting chills thirty minutes after finishing the Caminito as they struggle to readjust to normalcy after such a mentally-taxing day. 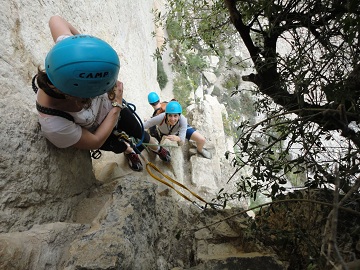 6. Step with confidence–during the Caminito, and after.

On the ride home, you’ll get a call from a friend, or maybe your mother. “Honestly,” you’ll say, “You could do it, I’m sure you could.” Maybe they will–but they probably won’t.

It’s probably true that any seasoned climber would consider the Caminito del Rey a technically-easy traverse. But equally true is that it’s also incredibly gratifying.

Author’s note: My friends and I made our trip through Gibraltar-based Barbary Rock Adventures, and while I’m usually reluctant to do much of anything “guided,” it wouldn’t have been nearly enjoyable without our guide, Steve, who was as insanely knowledgeable as he was good-humored. While it’s certainly possible to make the Caminito without a guide, or even alone, proper safety equipment should always be used.

Check out the MatadorNetwork’s experts from Spain.
Check out a video on MatadorTV’s Most Dangerous Hike.

Tagged
Hiking Trip Planning
What did you think of this story?
Meh
Good
Awesome