You know a rider has left a serious dent in the history of the sport when even your grandmother knows her name. Kelly Clark has been dominating women’s snowboarding nonstop for the last 15 years. She’s won literally every major snowboarding event at least once, including an Olympic gold medal for halfpipe in 2002. Add that to her seven US Open Championships and over a dozen Winter X Games medals, and you’ve got the most decorated athlete in the history of the sport.

When Clark busted the first 1080 ever landed by a woman in competition during the 2011 Winter X Games, she gave all the kids watching at home a brand new hero and a brand new trick to get on lock. Continually setting and resetting the standard for women’s halfpipe, she’s actively dictating what women in snowboarding will need to be capable of — which is awesome for the new crop of young snowboarders for whom, as Clark puts it, her “ceiling will be their floor,” and super sucky for old folks like me who’ve discovered over the last decade or so that our bones are too brittle and our egos too sensitive to try to keep up.

Despite her countless achievements, it’s through the Kelly Clark Foundation that Clark hopes to leave the longest-lasting impact on the sport. Founded in 2010, her non-profit aims to provide grants for kids attending mountain schools like the one she attributes to her own successful start in snowboarding. By providing access and opportunity to young athletes in need (and obviously a huge library of inspirational footage), Clark may just be raising a new army of talent.

One of the biggest elements behind the rapid progression in women’s snowboarding is girls like Elena Hight who just don’t see any good reason NOT to ride at the highest possible level.

A two-time Olympian and winner of four X Games medals, Hight refuses to let anyone else’s expectations get in her way. She landed the first 900 in competition in women’s snowboarding history…when she was 13. Then she took it to another level during the Superpipe event at the 2013 Winter X Games, when she became the first to land a double backside alley-oop rodeo in competition. And by first, I mean first. human. ever.

Her introduction of gut-churningly scary tricks to the halfpipe propelled the progression of women’s riding into hyperdrive, and she doesn’t bullshit about the work, time, commitment, and effort that goes into everything she does. Her web series Hight Hopes puts it all out there for aspiring riders to see. Honest and real, Hight downplays nothing in front of the camera, putting a face on the sometimes-overblown “Professional Snowboarder” myth — even the parts that would make you want to quit, go buy a pantsuit, and just make spreadsheets for a living instead. It’s this vulnerability that shows girls at home that pro riders, male or female, aren’t just lone superhero-freaks. She reminds us that with enough discipline and grit, nothing is impossible…even for us regular-strength humans.

Despite coming up during a time when big-mountain riding was an inexplicably unpopular way for a professional rider to make a living, Victoria Jealouse spent the 1990s and early 2000s dominating the steepest and scariest lines in Alaska and Whistler backcountry. Giving absolutely zero fucks about what was considered marketable, or even “cool” at the time — especially for a female rider — Jealouse left the world of competitive snowboarding and sought out a way to find her place within the all-male film crews that made up the teeny-tiny big-mountain riding world.

To understand just how rebellious Victoria Jealouse is for heading in the exact opposite direction of money and recognition in favor of spending decades gaining the experience necessary to become a reliable backcountry rider, you have to understand that her mission was a completely solo one. Even the idea of Jealouse fighting for video parts of her own was foreign. If opportunities for male riders to become successful in the world of big-mountain riding were slim, for Jealouse, there simply weren’t any.

Her 2007 part in TGR’s Anomaly proves that her efforts were well spent. Watching her charge Alaska’s steep spines with more grace and skill than 99.9% of snowboarders on the planet could muster makes it clear: Victoria Jealouse is truly badass. 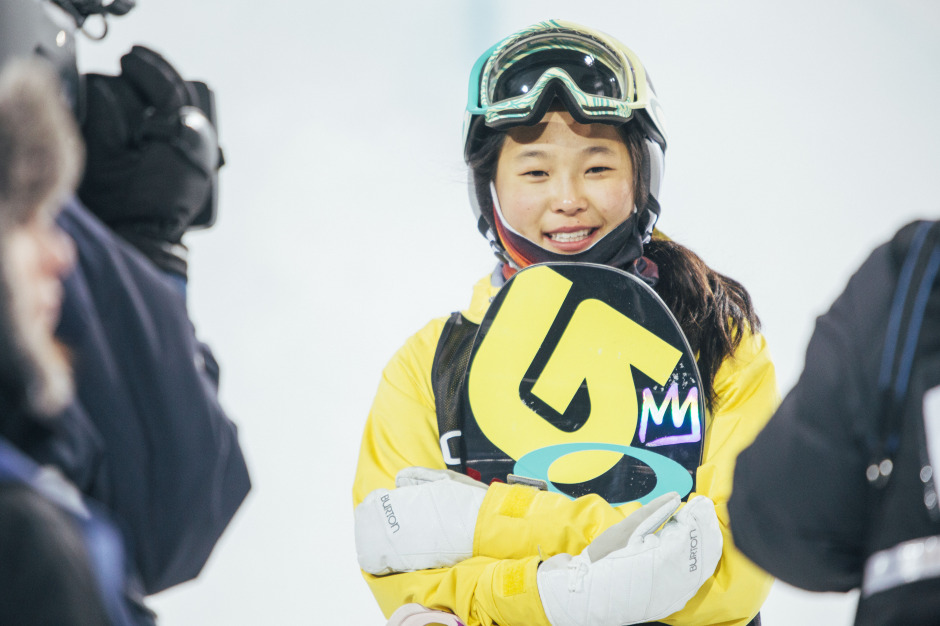 Routinely winning competitions over women who’ve literally been practicing longer than she’s been alive, Chloe Kim may not have completely altered the course of snowboarding history just yet — but every single flawless, oozing-with-style run she throws down feels weighty and monumental. It’s really just a matter of expediency to count her in now as one of women’s snowboarding’s finest.

During the 2014 Olympic qualifiers, Chloe Kim finished in 2nd place just behind 2002’s gold medalist Kelly Clark. Results like that wouldn’t just send her to the Sochi games, they’d also make her an obvious choice to bet on while placing your women’s snowboard halfpipe wagers. There was just one problem: She was only 13 at the time, making her nearly two years too young to qualify.

Logically, Kim did what any pre-teen in her situation would do and headed off to the Winter X Games in Aspen, where, with her silver medal win, she became the youngest medalist in X Games history. She followed that up by winning 3rd place in the Burton US Open of Snowboarding (she got Best Trick for her steezy ginormous switch method there, too)…then finally celebrated her 14th birthday.

Up until the 2014 Winter Olympics in Sochi, Great Britain had never won a single medal on the snow. Jenny Jones fixed that little problem — she brought home the bronze in Slopestyle, adding to wins she’d already amassed in her 15 years of riding, making her the most successful snowboarder, male or female, in Britain.

It’s hard to believe that just a couple years before Jones’ competitive debut in ’99 at the British Championships, she was learning how to ride on a barren local dry slope in Somerset, England, far from any actual mountains. Her Sochi medal exploded the previously less-than-booming snowboard scene in England. Dry slopes called it the “Jenny Jones effect” as their lessons sold out, their employees were overwhelmed, and their websites crumbled under the weight of heavy traffic from all of England’s would-be future snowboard pros.

The most remarkable thing about the Jones-inspired snow-stoke, though, is that it happened in England. People — and not just young people — in a country that’s pretty much entirely devoid of mountains were jumping at the chance to experience that first-day-on-the-snow, falling-and-rapidly-in-love euphoria…and they didn’t need actual snow under their boards to feel it.

Throughout the history of the sport, women have consistently found more recognition in the snowboard industry within the confines of competitive riding. With literally just a single exception (Victoria Jealouse), women have been conspicuously missing from big-mountain freeriding.

After a stint as a competitive rider (and a successful one, too — she’s actually a two-time US Open champion), Annie Boulanger made the switch to full-time backcountry riding, a transition that’s challenging for even successful male riders. Against the advice of her sponsors, she clawed her way into a world where she’d have to prove her worth and create her own opportunities in situations where a teensy bad call or miscalculation could kill you.

Years of developing the skills needed to succeed at backcountry riding (she spent ages becoming a snowmobile expert alone) eventually paid off when Absinthe offered her a video part in 2007’s Optimistic? Her appearance in 2010’s Neverland snagged her a Women’s Video Part of the Year and a Women’s Rider of the Year, proving to sponsors and filmers that we actually enjoy watching women charge the kind of lines that would make skilled riders of any gender curl up in a fetal position and cower.

Boulanger completely destroyed the concept of what is and isn’t “marketable” in women’s snowboarding and busted down the barricades for a fresh batch of female backcountry riders to take their turn.

If you’ve ever bitched about how expensive a hobby snowboarding is, Jess Kimura is your girl. She proves that you don’t need access to a helicopter, to be dropped into chest-deep pow, to sell your furniture in exchange for a lift ticket, or to put on a competition bib in order to get outside and snowboard. With no room in her budget for a season pass, let alone travel expenses to compete, Kimura quickly realized that urban rails were her ticket to riding on the cheap.

Calling bullshit on the idea that it’s okay to be labeled good “for a girl,” Kimura holds her own against guys in the park and leaves nothing on the table — we’re talking about someone who once accepted a challenge from some dudes to huck a backflip off a homemade jump before she could even toe-turn. Every single time she shows one of them up gets counted as a tiny victory for female snowboarders everywhere. Her aggressive riding style scored her a Women’s Video Part of the Year (for CAPiTA’s Defenders of Awesome), a Reader’s Choice Fan Favorite, and a Women’s Rider of the Year award in 2012.

Known almost as much for her bloody slams as she is for the tricks she pulls, she proves with every single video part that all it takes to snowboard is a huge set of balls — figuratively, anyway. Leading the charge for girls who want to rip as hard as the guys and who won’t take no for an answer, she’s evidence that stereotypes about women’s snowboarding aren’t going to dictate how we ride.