1. Getting on the water at Lewis and Clark Recreation Area 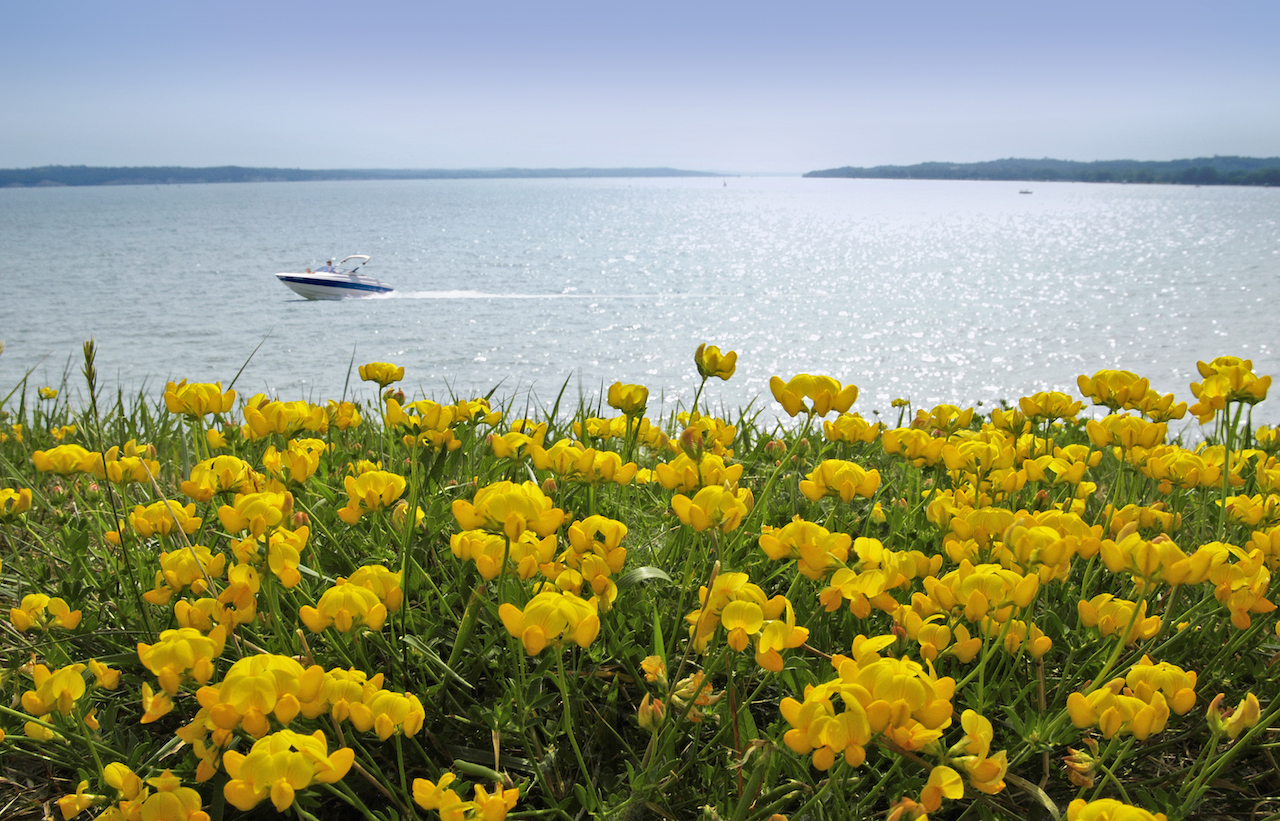 This spot might just be the best way to spend $6 in South Dakota. Six miles west of Yankton is Lewis and Clark Recreation Area, and it has just about every outdoors activity — and some indoor ones, too — you can think of. There’s the largest marina in the state, two swimming beaches, disc golf, nature and biking trails, mountain biking, boating, fishing, horseback riding, sand volleyball, and a resort (for the sunburned and tired).

But boating is really where this place shines. Grab a few friends, rent a sail- or powerboat, and spend a day on the water. The marina is absolutely huge and has everything to keep you covered. When you’re done, grab a drink at the restaurant or picnic along the shore.

Far more than just a “Plains State,” South Dakota offers legit classic rock climbing, and the Cathedral Spires in Custer State Park are arguably some of the most adrenaline-pumping. They’re a 30-minute hike from (and high above) the Needles Highway, so keep an eye out for the “Needles Eye” when you’re driving (or hiking) — it looks exactly like it sounds: years of Mother Nature at work have created a hole at the top, resembling the eye of a needle.

There are several spires you can climb here, but a solid bet is to hike up the Cathedral Spires Trail to the backside until you reach the gully between spires 3 and 4. Once you ascend to the top of your climb (spire 4 is the highest and the most popular), you’ll have sweet views of Harney Peak (the highest in the Black Hills) and an aerial view of one of the most photographed places in South Dakota. Just be sure to be well-prepared or take a guide from Sylvan Rocks with you through this daring climb. For novices, Sylvan also offers less challenging yet equally enjoyable routes throughout the Black Hills and Palisades State Park. 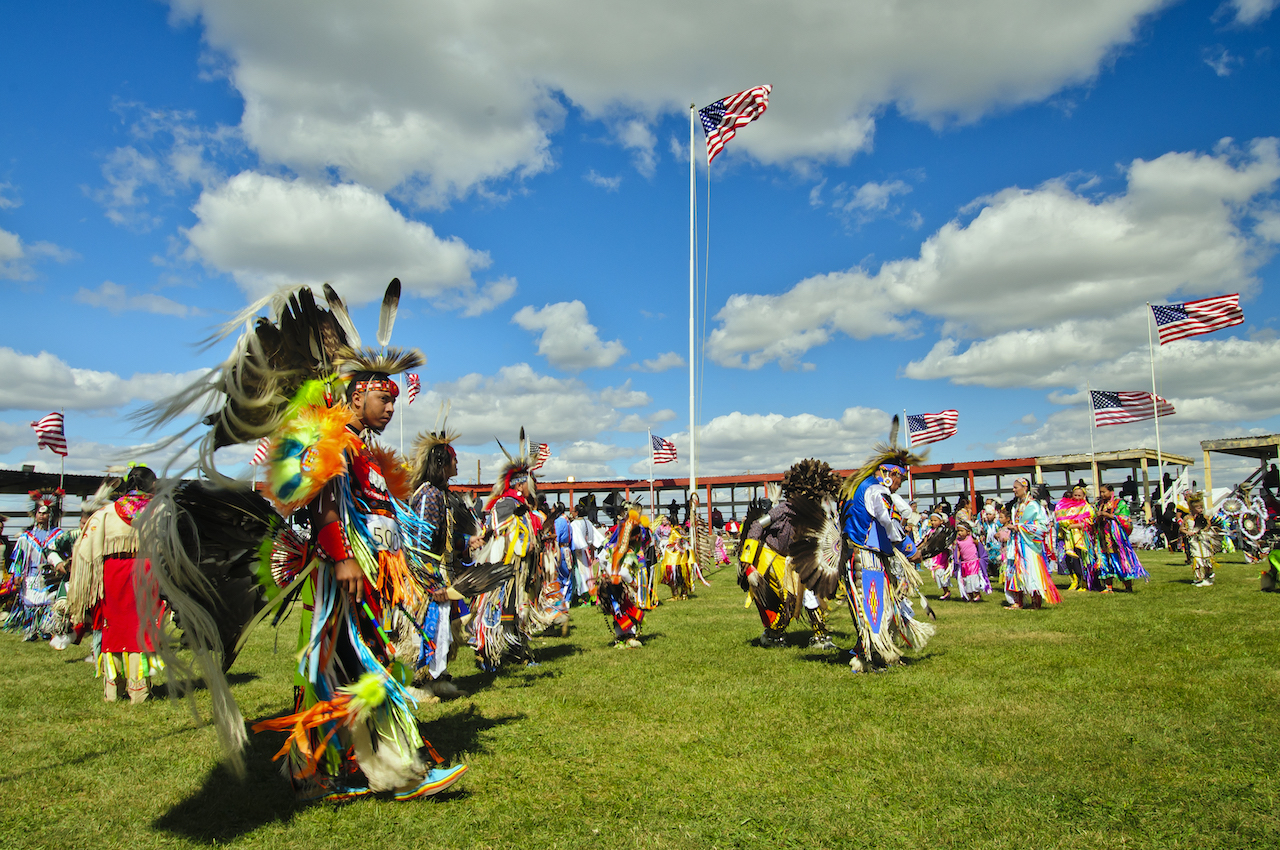 South Dakota’s Native American tribes offer the public the privilege of observing the tradition of the Wacipi (wa-CHEE-pee), or powwow. The rhythmic beat of drums and steady song seems to pulse through the floor as the Head Man and Woman dancers lead the Grand Entry; the songs they dance to reflect on honor, family, conflict, encouragement, and joy; the intricate regalia they’re wearing tell of generations of fine craftsmanship, from brightly dyed cloth to beautiful beadwork and delicate feathers.

The day will continue with traditional dance competitions, and don’t resist an offer to enter the arena during an intertribal dance! Visitors can also shop for fine crafts or taste traditional foods, like sweet wojapi or fruit jam. Note: It’s important to learn appropriate etiquette before attending an event like this, so as to show the utmost respect and honor to the peoples and cultures of South Dakota’s tribal communities.

4. Paddleboarding one of South Dakota’s many lakes

In addition to the major man-made reservoirs along the Missouri, there are plenty of smaller, more secluded bodies of water, many of them set within the gorgeous landscape of the Black Hills. Sylvan, Deerfield, Sheridan, and Pactola Lakes are all great places to go stand-up paddleboarding.

If you’re new to the activity, don’t worry — there’s not much of a learning curve, you can get an inflatable board that fits in your trunk, and it’s a workout that doesn’t really feel like a workout. Start on Deerfield Lake — a 435-acre no-wake lake where boats are limited to 5mph and under. Just be sure to bring the sunscreen; it’s easy to spend an entire day out in the elements, especially with campgrounds and hiking near pretty much any spot you choose.

5. Spelunking the hidden caverns of Jewel and Wind Caves

South Dakota is home to two of the longest and most intricate caves on earth. Jewel Cave National Monument, the third-longest cave in the world, has 180 miles of mapped passages. You’ll need a guide (several tours are led by park rangers) and a good headlamp to light up the underground world as you bend, stoop, and shimmy your way around calcite crystals and rare hydromagnesite balloons.

Wind Cave National Park is a slightly different experience — as soon as you approach the entrance, you’ll feel the intense winds pouring out of the earth that give this cave its name. As you descend the uneven and often slippery floor by candlelight, look for rare boxwood formations, created by gypsum, filling the cracks in the limestone.

6. Feeling the earth thunder at the annual Buffalo Roundup 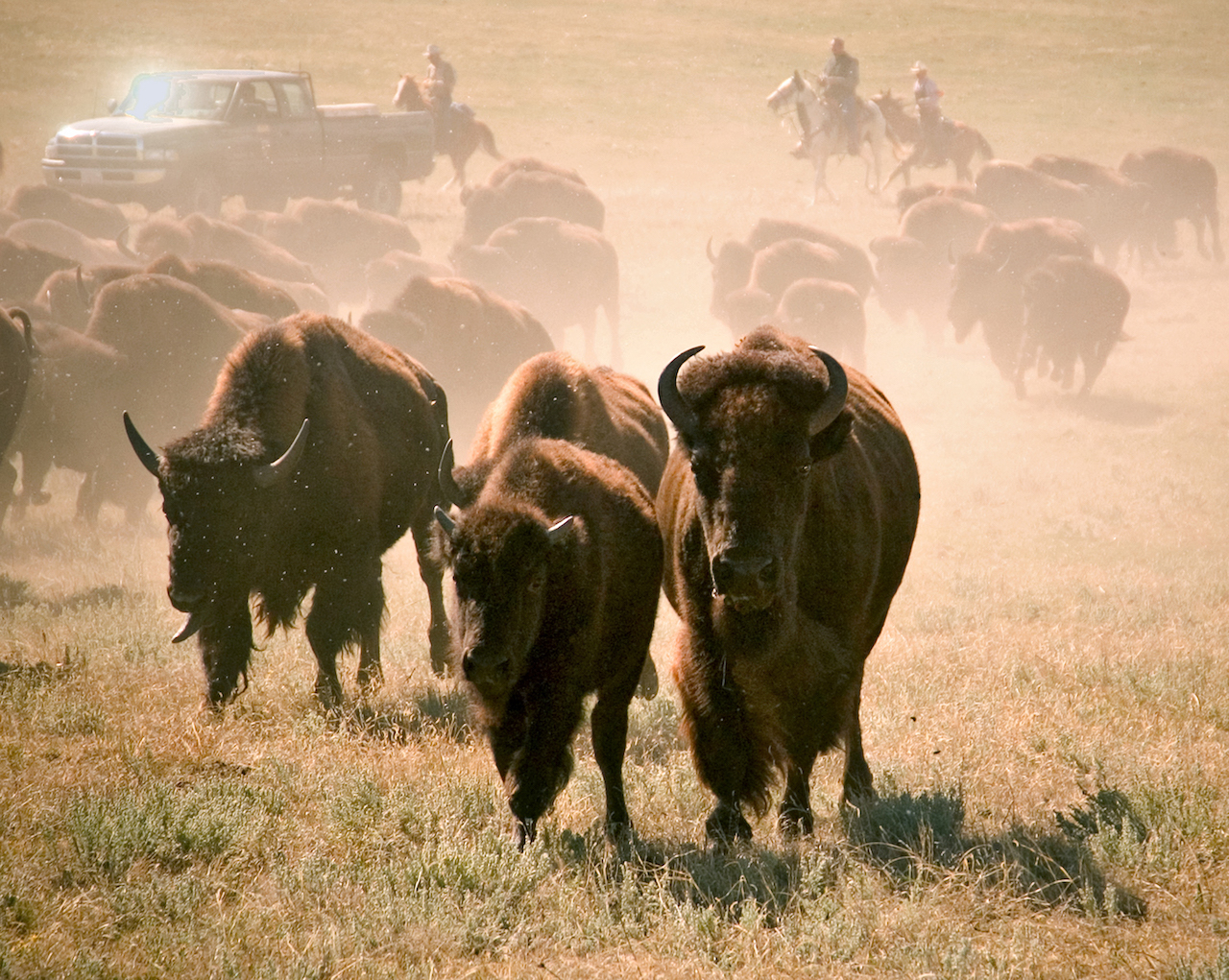 You may have seen the spectacular herd of buffalo grazing in the prairie grasses of Custer State Park; however, the real thrill comes when they’re roused into motion. An average buffalo weighs nearly 1,400 pounds and can reach speeds up to 40mph. The Custer herd of approximately 1,300 buffalo is rounded up each fall, and the event is open to spectators. The prairie practically thunders as hooves pound into the turf and cowboys and cowgirls cry out in what sounds like their own language. The energy continues with handicraft booths, live music, and the Cabela’s Dutch Oven Cook-Off. 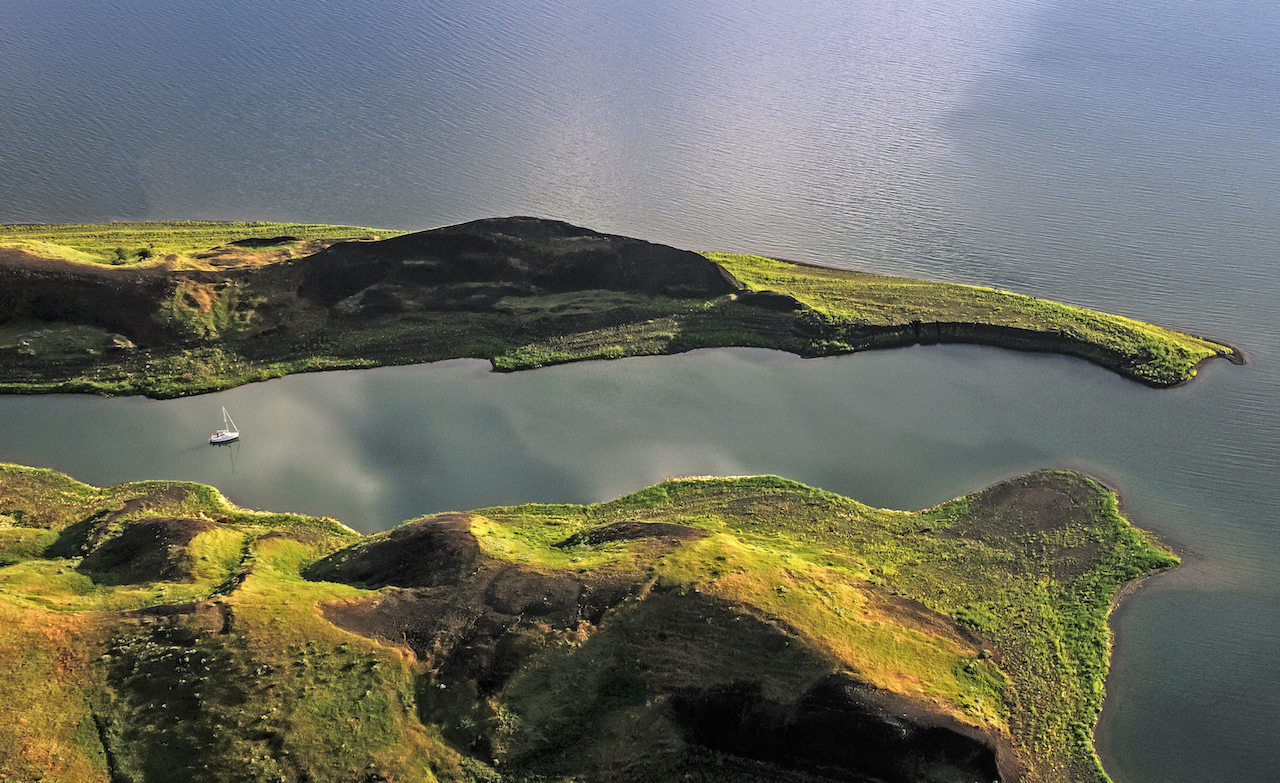 South Dakota may be miles from the ocean, but that isn’t stopping any of the locals from honing their scuba skills. Steamboat’s Inc. in Pierre will guide you to the depths of Lake Oahe, a massive man-made reservoir on the Missouri River, and set you up for a ride on the renowned “Oahe Tailrace.” Water released through the dam propels you at speed down the Missouri, past an unsuspecting bottom of large rocks, sunken boats, and schools of fish.

Don’t stop there, though. Leave some time to track down the bigmouth buffalo, a fish that can reach up to 80 pounds, in an underwater spearfishing escapade. You’ll find South Dakota’s best freshwater diving in Lake Oahe, Lake Francis, and the Pactola Reservoir.

8. Backcountry camping in the Badlands 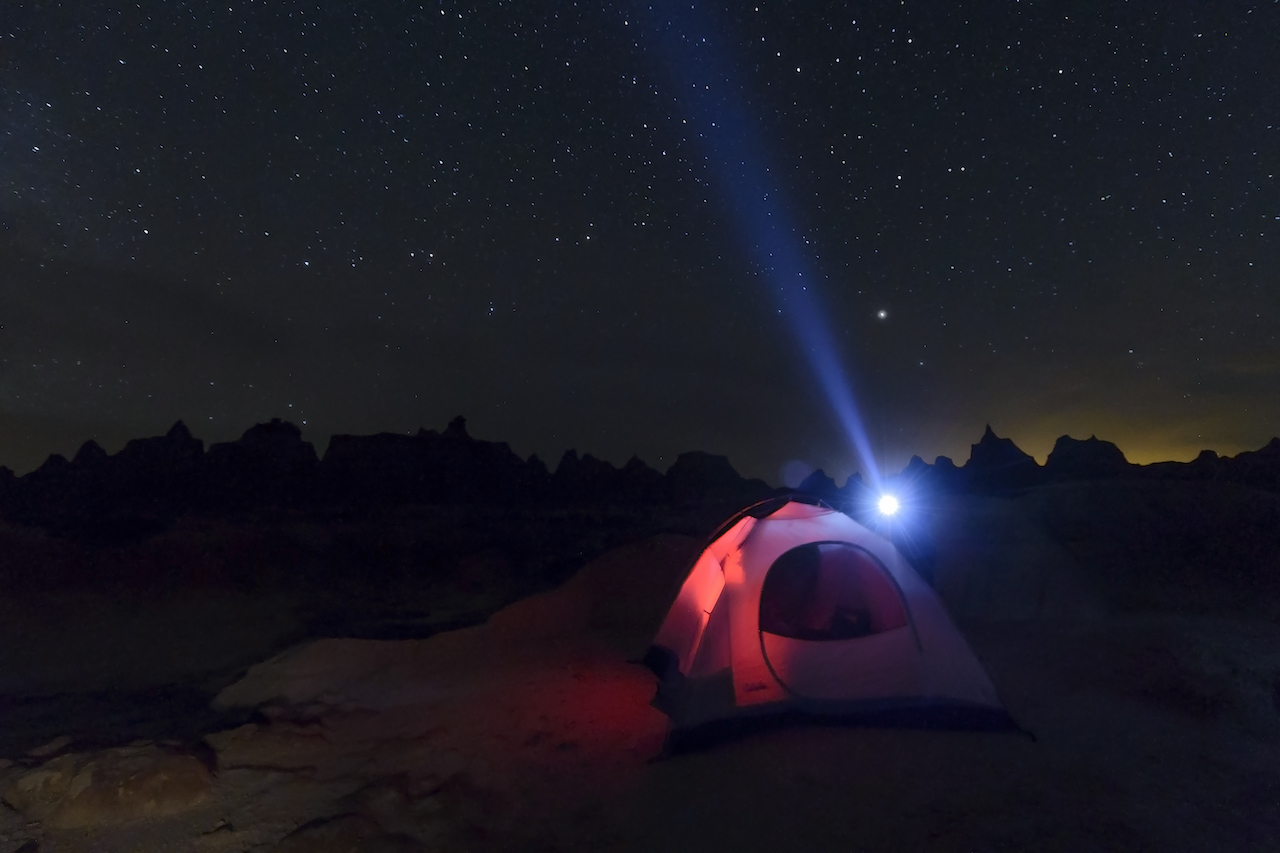 There is absolutely no better way to explore this starkly beautiful landscape than camping in the middle of it. With 50 miles of serenity and solitude in any direction, the pictures will be epic, the experience will be unforgettable, and the adventure different than any camping you’ve ever done.

Your best bet is to go in September or October when temperatures are at their most pleasant. Bring plenty of food and water (and a way to dispose of it), sturdy boots, and always let a ranger know you’ll be out there before you go. You’ll find backcountry registers at the Medicine/Castle Trail Loop, Saddle Pass Trailhead, Conata Picnic Area, Sage Creek Basin Overlook, and the Sage Creek Campground. To explore the South Unit (where some of the land is privately owned and thus requires permission to access), talk to a ranger at the White River Visitor Center to map your best route.

Check the park website for more information on planning your backcountry experience. It’s something not everyone knows about — which makes it all the more exciting.