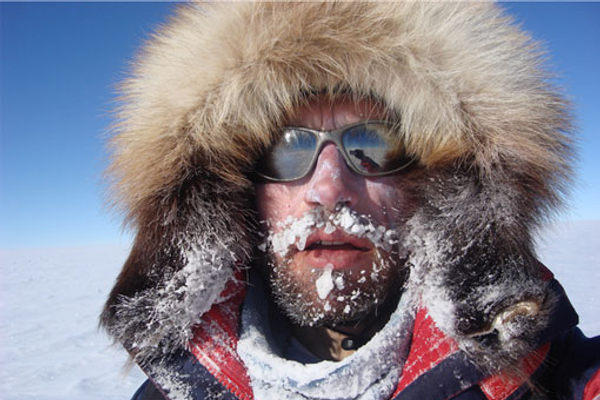 All Photos by Derek Crowe

Adrian Hayes is an adventurer’s adventurer. In 2007, the Dubai-based explorer joined one of Earth’s most exclusive clubs when he became only the 15th person in the world – and the fastest person in history – to achieve the “3 Poles”, reaching the summit of Mt. Everest and walking unassisted the entire way to both poles.

Not content with these record-breaking feats, Hayes recently teamed up with Canadian adventurers Devon McDiarmid and Derek Crowe to attempt to traverse the full length of Greenland, from the Atlantic Ocean on the south coast to the Arctic Ocean on the north coast, in order to draw attention to global warming and the damage it’s doing to the polar ice caps.

Using the power of the wind to kite ski and haul 150 kg (330 lb) sleds over a 3,500 km (2,175 mile) route that has never been done before, the Emirates NBD Greenland Quest is set to be the longest unassisted Arctic polar journey in history. The trio left in May and, at the time of writing, have 800 km (497 miles) to go.

The day before I chatted to Hayes via satellite phone, an entry on his blog revealed that the expedition was starting to run into problems. It talked of near misses with deep crevasses, winds blowing in the wrong direction, and low food supplies: 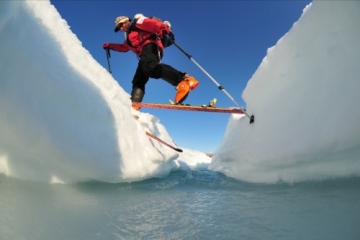 Where are you right now and how are things?

We are still around the Arctic coast. We’ve actually had a tentative few days. The landing point is still 800km away and we’ve got bad winds, crevasses, white-outs…to be honest, it’s not going well.

We hadn’t seen a single crevasse on the main ice cap, just from a few right at the beginning. Then yesterday we almost hit this massive, seemingly bottomless cavern during a white-out. We only managed to stop about ten feet from it.

To cap it all, Devon also fell into another crevasse just five meters from our tent. His legs were suddenly left dangling in thin air, but he managed to find a grip with his arm. Needless to say he was quite shaken.

Sounds frightening. Are there precautions you can take for these kinds of risks?

Well you can rope up, but it just slows you down so much. So you end up just trying to minimize risks and being cautious. But this has reminded us that on a 1,600 meter [5,249 foot] deep ice cap you really have to be careful.

To be honest the wind is now our biggest problem. We’re kite skiing so we need side-on winds for the sail to go forward, or winds from behind if they’re strong enough. If they’re blowing from the front, which they are now, you can only go left or right. To give an example, we managed 71 km [44 miles] in distance last night but only actually pushed 20 km [12.4 miles] forward.

And you still have a way to go too.

That’s our problem. We have 800km to go with only 16 days worth of food. To walk that would take 40 days – more because the more you walk, the more food your body needs.

So there’s a lot of strategic thinking right now. We have a meteorological expert helping us out, and we have certain strategic measures we can employ. We have a lot of fuel left and we are already starting to cut down on food. 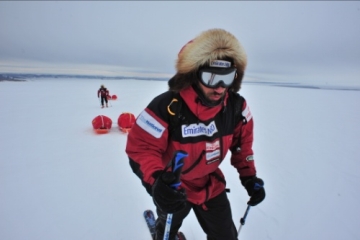 So what kind of preparation goes into an unsupported trip like this?

We prepped for about a year and a half before we set out, which wasn’t actually very long. What made it good is that we all had different areas of knowledge and responsibility. Derek is a photographer and a kiter. Devon is good with systems, food and fuel. I’ve done the sponsorship, logistics and communications.

The key thing was equipment, which is essential on these kinds of unsupported trips. It’s the little things: your personal communication kit, your medical kit, the food bags, the way you keep things dry.

I’m guessing the trip has been pretty physically demanding.

Well, kiting isn’t as taxing as physically hauling sleds, which is what I’ve done on previous trips. But you might be doing it for up to 24 hours sometimes, and you’re sleeping rough, eating freeze-dried food…it takes its toll.

There must be a lot of repetition involved, in terms of tasks and scenery and whatnot?

Definitely. The whole thing is repetition. In terms of views there’s white ice cap, blue skies and each other – and that’s it. There’s no diversity at all. Other adventurers, like climbers for example, often can’t handle these kinds of trips as they’re used to constantly changing landscapes. The mind has to be attuned.

What about protection against Polar Bears?

We have a rifle with some slugs. We haven’t seen any yet, but Qaanaq, our final destination, is apparently crawling with them. We have bangers to scare them off too, so we’re hoping not to use the rifle of course. In fact we didn’t want to bring a gun at all, but we were strongly advised to do so. 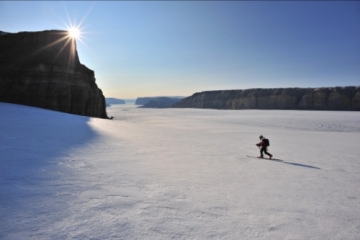 A big part of this trip is to make a strong environmental statement, right?

Yes. Along with our sponsors, which include Emirates NBD Bank, Ozone kites and charities like BioRegional and One Planet Living, we’re helping push the movement for sustainability. In a nutshell, we’re highlighting the melting Greenland ice cap in a very distinctive way – we were literally swimming in water just a few days ago where there should have been ice.

What tips would you give to aspiring adventurers?

Well, adventure tourism is growing at a massive rate. You can come to Greenland and do a fairly serious expedition, but you have to pay something like $9000. But there’s a sea change when you move from that to the really big stuff. For that you need money, sponsors. The dynamics change.

You see gimmicky things dressed up as adventure, like “the first transvestite to reach Everest”, et cetera. But we’re very serious about what we do, and we have some serious messages.

You can find out more information and follow Adrian, Derek, and Devon’s progress on the expedition’s blog, www.greenlandquest.com.

Tagged
Travel Greenland
What did you think of this story?
Meh
Good
Awesome