MADEIRA ISLAND, PORTUGAL, is a paradise. It juts out from the Atlantic’s turquoise waters that surround it, to 6,000 feet elevation in the small span of thirty five by twenty two miles. Situated five hundred miles off Northern Morocco, it’s placed perfectly to avoid most of the busy storm activity further north, benefit from some humidity, and not suffer the arid desert heat the way the Canaries do further south.

Madeira is the quintessential Mediterranean island in the Atlantic. White stucco homes with red tile roofs cover the hillsides in an eye-pleasing manner, personal gardens and terraced farm plots flourish all around, waterfalls pour off the cliffs, cafés are plentiful and people move slow in the old world way. It is one of those places to slow down, take it all in and benefit from the freshness all around. 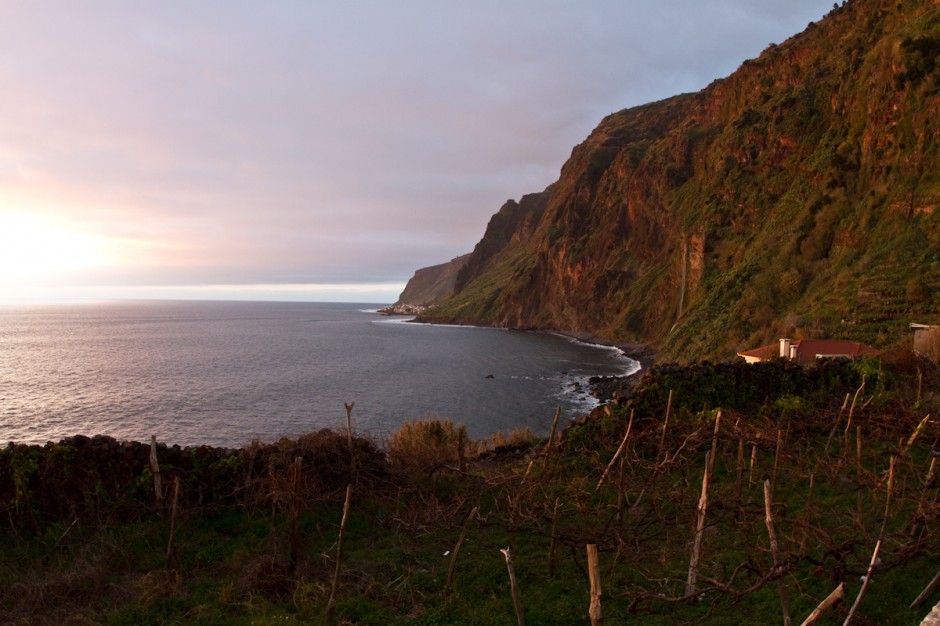 The view from the village of Jardim do Mar, looking up to Paul Do Mar in the distance. This is a paradise for surfers, with 3 world class waves in a row that can all be watched from the same place, in an environment this stunning.

For the active, hiking, surfing, fishing, and diving are the main sources of interest. With such a drastic elevation gain in such a small space, the island has multiple microclimates, beginning with subtropical at the coast, turning into tundra at the peaks. In between are temperate forests, with transparent rivers wind through deep valleys and gorges, dotted with big swimming holes and some of the best tasting water in the world, which bubbles from the mountain springs and works its way all the way to the coast.

For surfers that enjoy bigger, powerful waves, Madeira is a rare geological phenomenon. Beginning with the village of Jardim do Mar (translated, garden by the sea, which it is) three world class big-wave point breaks are situated one after the other in a two mile stretch, ending at the village of Paul do Mar. It is one of the spots I keep coming back to and treasure as a favorite place in the world. The routine is so simple. Stay at a guesthouse in the village of Jardim, which has only narrow alleyways snaking around it, and a parking lot for cars at the top of town. Enjoy a stunning view of the coast and mountains which fall directly off into the ocean and the three perfect waves that break underneath them. Surf when it’s good, hang out at the couple cafes, read books, hike the trails up the mountains, enjoy the village fruit, explore the island. Just the simple pleasures. And like I mentioned, the surfing is absolute world class, and can get massive. 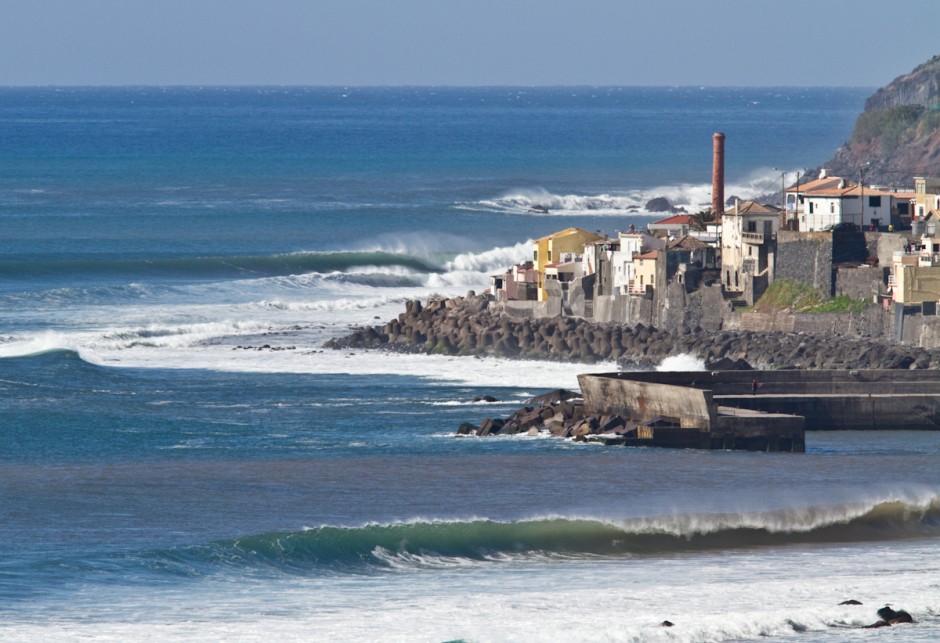 Paul Do Mar is the best wave on the island for tube rides. Once again this is the view from Jardim, and gives a look at the marina at the bottom of town. The development would not begin until around the corner

The Madeiran government has been very busy the past couple decades making tunnels that cut through the land. It is widely agreed they are a good thing, as they have made life much easier to move around the island, compared to before when roads followed land contours and were very slow going. They have also been busy building sea walls to make tourist promenades that can accommodate tourist buses that shuttle elderly tourists around the island mostly. This is where things have gotten controversial and sad for surfers. It began in 2008 with a sea wall that extended out at a point of land called Ponta del Sol, a very good intermediate surfing spot the locals really enjoyed.

The wall greatly affected the wave, and made it so it could not be ridden at high tide. Then came the proposition and follow through of a sea wall at Jardim do Mar, the Jewel of the island, and one of the best waves in the world. It was a big controversy. Surfing is a legit source of tourist income for the village and no surfers on the island or worldwide wanted it, and probably only half the Village did. Big protests occurred, but in the end, the driving force behind the development, the government and the big business contractors won, and the sea wall promenade was built. It extends to the waters edge and has probably 100,000 harbor jacks in front of it as the shoreline. A very sad land transformation. The wave still breaks there, but once again, as with Ponta del Sol, you can’t ride at high tide. But fortunately it did not put the wave into extinction because it is usually 20 to 40 feet when it is surfed, and breaking a couple hundred feet off the shore. Not much will stop ocean swells like that. 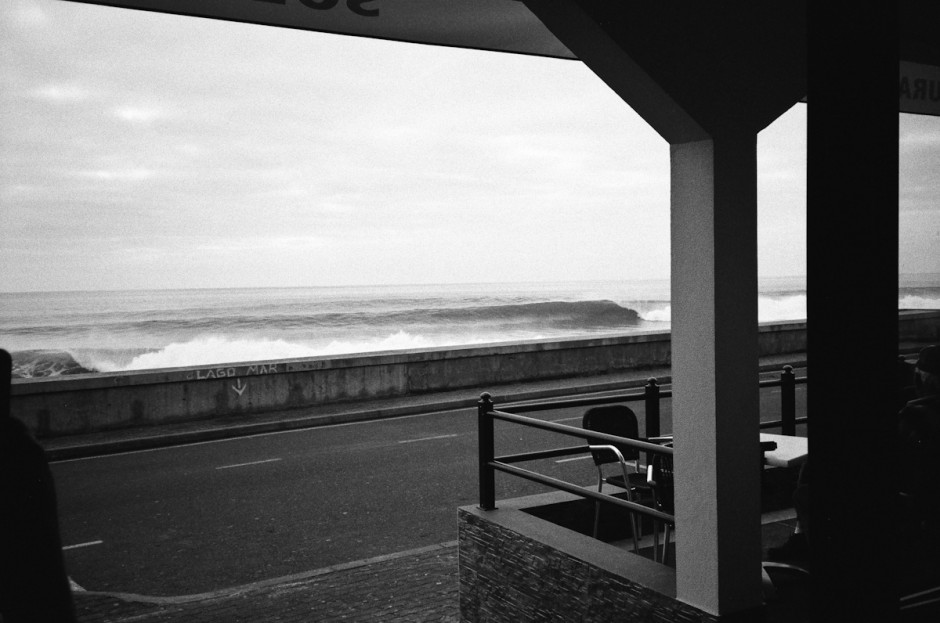 There are a few cafes in town. This is looking out from one of them, with a good view of all the elements. Existing wall and road, and the wave which breaks close to them already. The situation is perfectly fine as it is.

The newest threat will put a wave into extinction. Paul Do Mar is the most consistent wave on the island and defines the term ‘world class’. It is the point of land two miles north of Jardim and already has a road with a sea wall along it, which runs the span of the point and the entirety of the village. It functions perfectly for this end of the road village with little traffic, as the coast becomes too steep and rugged after it for further development. The waves here break a mere 50 to 100 feet from the current sea wall, and finish directly onshore. It is the place to surf from 3 to 15 feet on the island, as opposed to the other spots. Unlike Jardim it can’t handle an extension into the sea. It would destroy the wave. 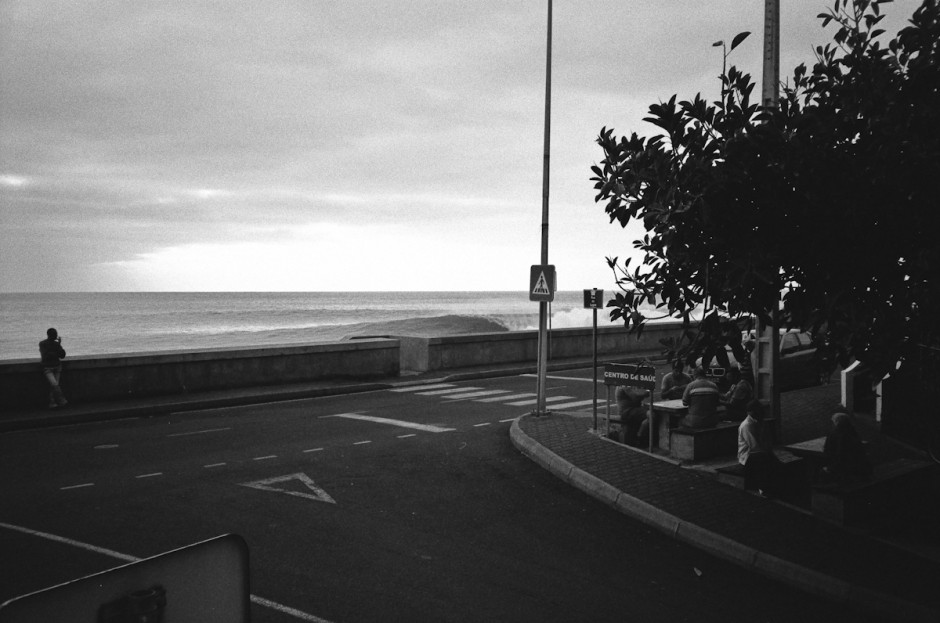 In the evenings things get lively along the wall. People come and play cards, watch the sunset and enjoy the end of the day.

But that is the proposition, a full extension into the sea. It does not make sense for this place and their claim to protect residences, because the current wall has worked fine at protecting homes. It is more likely the big business machine needs to keep moving on, and unfortunately the government does not regard the surf tourism for much, or the surf lifestyle of the locals who all enjoy this spot. I’ve talked with my friends there and they say the only thing to do is spread the word and hopefully instill a change of heart, but history has shown it is a difficult sell to keep a surf spot alive on this Island. So as a person that loves the place, I’m just trying to spread the word. 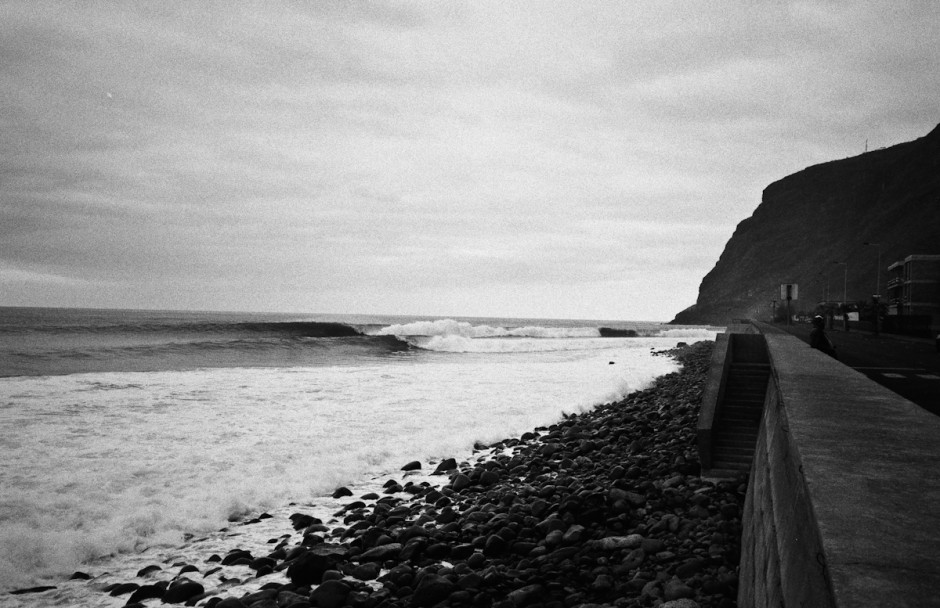 This is a view of the existing seawall and proximity to the waves. The proposed wall would extend well into the ocean and destroy the rare thing of a perfect surf break. One of only a few on this island.

And check out the Facebook page, Save Wave Paul Do Mar, to interact.

Tagged
Activism Surfing Madeira
What did you think of this story?
Meh
Good
Awesome

13 Images That Prove Renting a Motorbike in Madeira, Portugal Is a Magical Experience

How To Do The Monte Toboggan Run in Madeira, Portugal