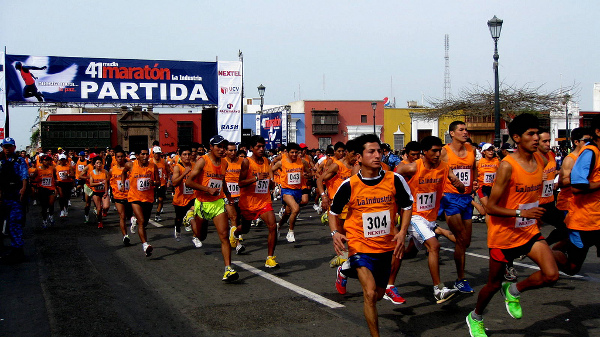 Jon Clarke runs a marathon in Peru on one day’s notice.

“DUDE, I’M GOING to do a marathon tomorrow,” Frank says. “Wanna join me?”

I’m a little surprised. Frank is a lovely guy, but permanently half-baked. Of all the people I expected to run a marathon, Frank isn’t even close to making the list.

It turns out that Frank isn’t just riding on a cloud of optimism: every running event here in Peru is referred to as a marathon. This particular event has marathons of 6.5km, 10km and 21km. Anyway, I figure that it’s about time I break a sweat and shake up my idle routine of beach living.

The next day, Frank is raring to go well before I am. By the time I roll out of bed, he’s been pounding steadily on the door for 10 minutes. The bell doesn’t work, as the entire electricity supply for the city appears to have been switched off for the day. This being Peru, nobody has any idea why and no one seems to care.

We trot down to Trujillo’s Plaza de Armas, the starting point for the marathon, and join one of a selection of snaking lines that eventually terminate in registration desks. Strangely, some of the runners in the queue are wearing leather office shoes.

“They’re just registering to get the running vest,” he explains. The city of Trujillo’s generous policy to allow free race entry is costing them dearly in orange cotton.

We line up beside the starting gate to cheer the junior runners off on their 6.5km marathon. The tagline printed in thick, white letters on the starting gate banner proclaims the race’s ambitious goal: “Our mission…Peace!”

This doesn’t really explain why a military general decked in full brass, the police chief of Trujillo, and Pepe Murgia, a doddering local politician, are assembled in front of the runners, each holding a white dove. The whole spectacle is in danger of being overshadowed by a full-scale military parade of goose-stepping soldier on the opposite side of the square.

With a helpful countdown from the assembled wall of photo journalists, the doves are released. They fly in bewildered circles above the cheering crowd before settling on a nearby traffic light. 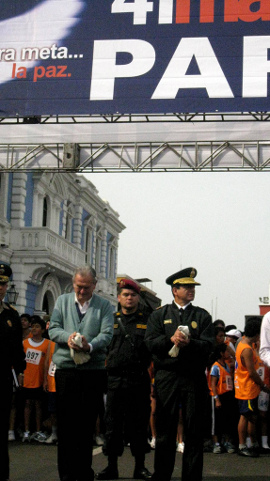 It’s the turn of the 10km runners. We line up in our orange vests and start running to the howl of the starter’s horn. The runners streak around the first corner; within half a block, several of them have already started walking, hands on hips, wheezing at their toes.

The organizers have selected Avenida España, the busiest road in the city, for the majority of the route. It soon becomes clear that they have not made plans to close this or any other road on the course. We jog down the long sections of four-lane highway as buses, cars and trucks howl past us. The air is thick with fumes.

We arrive at the first intersection. A traffic cop on a motorcycle sits with lights flashing and white-gloved palm extended, a modern Moses in a Red Sea of growling, impatient metal. This is the last time anyone helps us across an intersection. The line of runners stretches out, stumbling over the course like First World War soldiers blinded by mustard gas. At one point a taxi screeches to a halt inches away from my legs and I slap the bonnet, yelling at the driver in breathless Spanish.

But it isn’t all near-death experiences and lung-cramping traffic fumes. Toothy smiles greet me from doorways. “Con fuerza, gringo!” some yell. One runner recognizes me from the beach town I reside in. “Huanchaco!” He beams, before turning to his struggling running partner, explaining that he knows the red-faced foreigner personally. 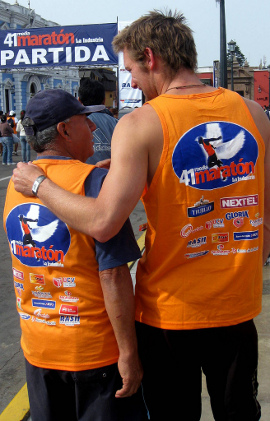 My last couple of kilometres are completed as a team effort with Carlos, the manager of a bus company in Cajamarca (“It wasn’t hard to get a sponsor,” he grins, pointing to the logo printed across his T-shirt). We lumber into the final football stadium to cheers.

“Come on Carlos,” I shout. We grit our teeth and pick up the pace for the last 100m of the sports track that surrounds the soccer field, divided up and alive with Sunday league junior games amidst the madness of the marathon’s finish gate. We arrive panting through a tunnel of carefully arranged promotional girls shoehorned into impossibly tight outfits, their faces caked thickly with make-up. They look far from impressed with our sweaty state, managing only to pull off tight-lipped smiles when a camera points at them.

I’m accosted by a reporter. “How was the race?” he asks.

“Very dangerous and badly organized,” I reply. “I was almost hit by a taxi.”

He swallows, eyes bulging slightly. Then I notice his jacket. The name of his newspaper matches that of the main sponsor scrawled across my sodden running vest.

“How would you rate your experience?” he asks, in a pleading tone. I look at him incredulously and sigh. “I’d give it a seven.”

Liam Aiello had a similar experience with orienteering in Denmark. Read his story in Help! I’m Lost in a Danish Forest!.

Tagged
Running Peru
What did you think of this story?
Meh
Good
Awesome

Flights to nowhere are growing, and they’re an insult to the planet
Stay overnight in a fire lookout tower for a sky-high wilderness escape
For the perfect day of hiking and Colombian coffee, head to Jardín
How climate change will alter chocolate as we know it
7 spectacular national parks to visit this fall