There are few places that consume such a great part of my memory as the Murchison Falls section of the Nile River in Uganda. It is as wild a place as I have ever set foot, contains some of the biggest whitewater I have paddled, and is basically a class V paddling safari through Uganda’s largest national park.

Bound at either end by unrunnable cascades, full of dangerous wildlife, and highlighted by class V whitewater, this section of river is one giant must-make move. It’s a serious undertaking, so there were more than the standard concerns bouncing through my head when I ended up at the put-in beside two rafts and a few clients.

Murch had only been rafted four times successfully, with three of those trips being led by our head guide, Pete Meredith. The other was its first descent in 1996 by Cam Mcleay’s Adrift team, which has since taken to softer options on the upper sections of the Nile. Pete’s first trip was in 2004 during a historic descent of the entire Nile, the first source-to-sea of its legendary 4,000+ miles. Since then, he had returned with three other groups of professionals to challenge the steepest, most dynamic section of the Nile, bringing the total number of rafters to complete Murch up to about 25 — roughly .06% of the 4,000+ who have stood atop Mt. Everest. 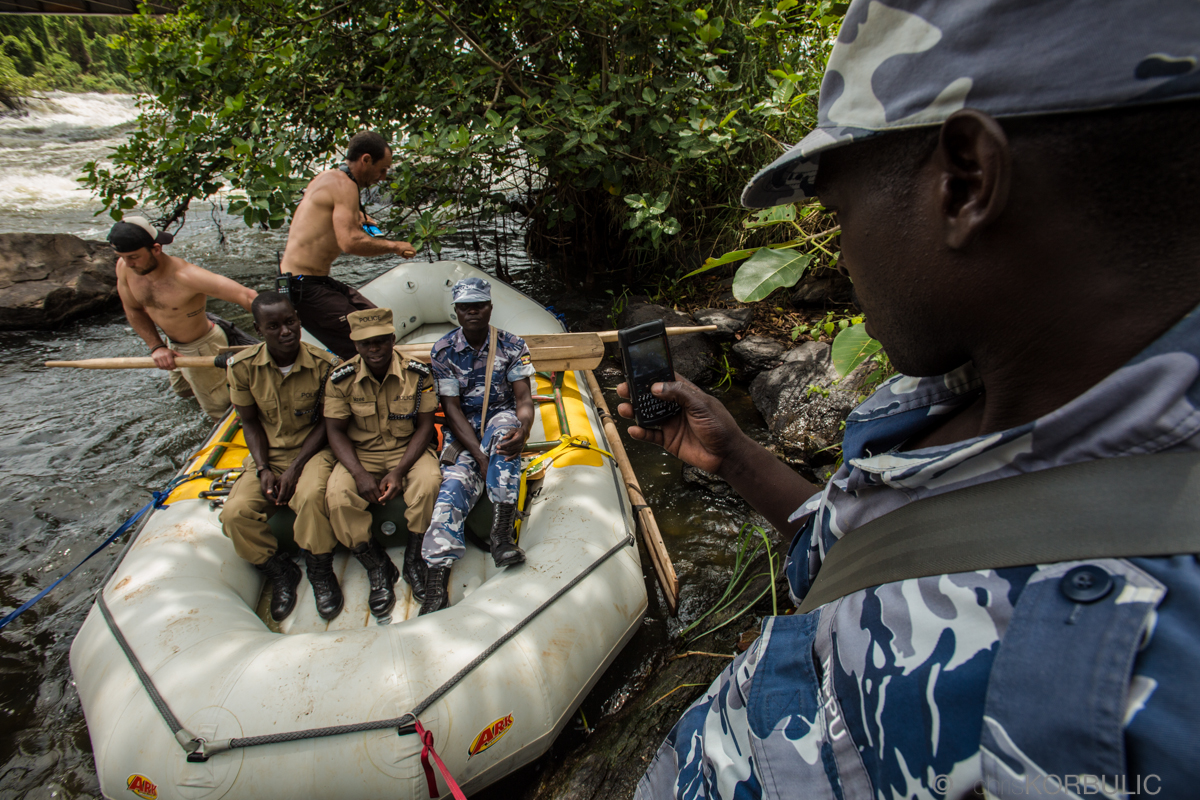 Police enjoying the rafts at the put-in, Karuma Falls Bridge.

Why so few? According to Pete Meredith, “Because it’s dangerous bru.” Among the multitudes of hazards and challenges during those years was the LRA (Lord’s Resistance Army). They posed a significant threat, largely keeping the group off the north bank of the river. Today, the threat is not so militant.

Standing at the put-in with clients Kyle Lisabeth, Dan Brown, and Glen Downton, rafts, and a group total of 10 was so vastly different from my first trip in 2010, when Ben Stookesberry and I followed Hendri Coetzee in a sprint to finish the 80km stretch in a day and a half. It was a blur, but a beautiful, streaking, eye-opening blur that I have since been drawn to slow down and soak in. We three had a flawless run, following Hendri on his seventh lap, weaving a risk-minimizing route through seemingly infinite channels, passing thousands of hippos, and seeing few crocodiles. I was struck by the immensity of the place, awed by the power of the Nile descending in stairsteps and massive falls.

I was sure this time the pace was going to be slower, and maybe the intensity, too, but at what cost I did not know. Paddling this incomparable section was a chance I knew I had to take, and I was nervous. Standing on the quivering bank by thundering Karuma Falls…I can’t imagine how the clients felt.

This was the first time commercial clients had rafted Murch. Nobody was certain it was a good idea, and by the looks on their faces, it certainly seemed like a bad one. But they had signed up, kept their heads straight through two trying days of prerequisite screening, and were climbing past military police into the rafts. As I watched everyone board the rafts, things weighed heavily in their favor — by the numbers at least: three clients to four guides, two safety kayakers, and me, the cameraman, to make them all look beautiful on the hardest river of their lives.

Our doubts were compounded when, 15 minutes downstream from the put-in, a raft flipped, sending two guides and two clients into swirling, dark currents. Alex Aitken, guide from Kenya, unaccustomed to such a high-volume river, got the worst with 10+ seconds of downtime in an eddy line, only to resurface far upstream of the raft, which had been taken by the main current. Another rapid was just ahead. With three swimmers still trying to reach the upside-down raft, I watched anxiously as both raft and swimmers dropped into the next set of waves with a large pool visible downstream.

We all knew flipping was a major risk. I always associate rafting with flipping and swimming, but on the Murch hippos and crocodiles make it a different story. We can usually deal with most whitewater x-factors, but what happens in the pools below these rapids is anyone’s guess — and could be their worst nightmare. This was why we had trained with the clients, and when they hauled themselves back onto the raft, flipped it over safely into the current, and resumed their positions, we knew the training had paid off. Our worst-case scenario happened in the first 20 minutes, and we came shining through while the gravity of this undertaking fully and quickly matured in our heads.

I was shaken, and I had merely watched the four swimmers from the relative safety of my kayak. Tense would be an understatement of the general group feeling, especially after a second flip only 30 minutes downstream. Soon after making the well-practiced recovery yet again, someone yelled “Croc!!!” and tension soared as we three kayakers scrambled into the rafts to watch a small two-meter croc eye us from a safe distance, seemingly curious to see what was passing his pool.

This wasn’t the last croc sighting, but thankfully the two early flips were the only ones. The river becomes more difficult and isolated as the days go on, but we were enveloped in the great Ugandan landscape, and our doubts were overshadowed by the place itself. We settled into a rhythm and it became clear to all that the new challenge of guiding a commercial trip was but a small piece of the puzzle, and that this was not a river to conquer or overcome, but a place to simply be, experience, and enjoy.

Five days rolled into one, and we reached an unplanned take-out after the rafts were forced offline in a long series of rapids above Murchison Falls. Any mistake in this final series of 300-meter-wide rapids and it is unlikely a raft or swimmer could make it ashore before plunging over the falls to certain death.

The decision to end the trip a single kilometer above the predetermined take-out did little to temper the excitement and relief of successfully finishing the first commercial trip down Murch. Kyle, Dan, and Glen had done it, and if their smiles at take-out were any indication of whether they absolutely loved it, it was easy to see they did. Any doubts I had about rafting Murch were squelched, although on future trips, I will definitely stick with my kayak.

[Note: This trip was made possible by adventure merchant Secret Compass and Pete Meredith’s TIA Adventures.] 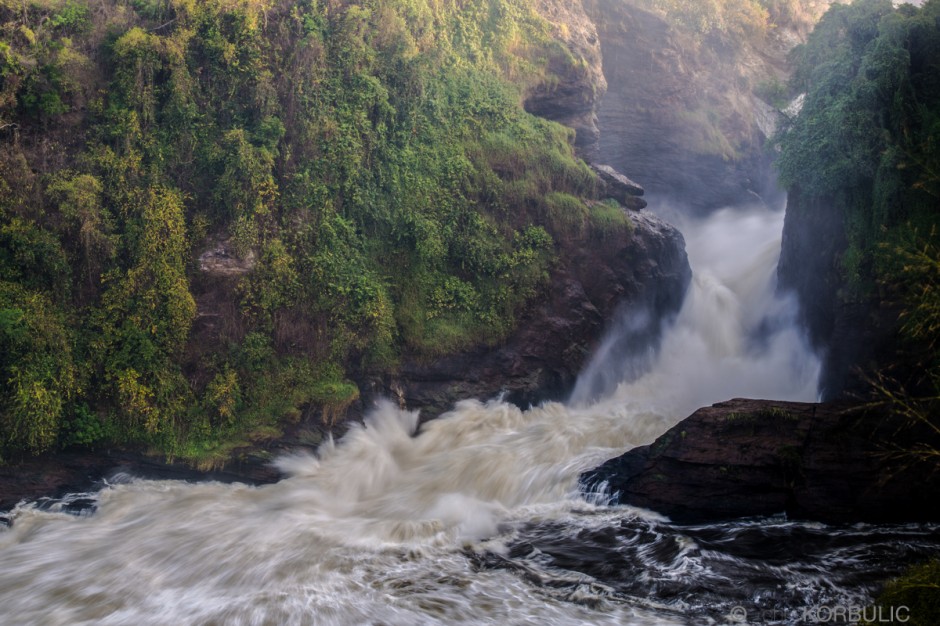 Murchison Falls, one of the most powerful pieces of whitewater on the planet, where the 10,000+ cfs of the Nile surges through a 25ft wide slot and falls ~150ft. 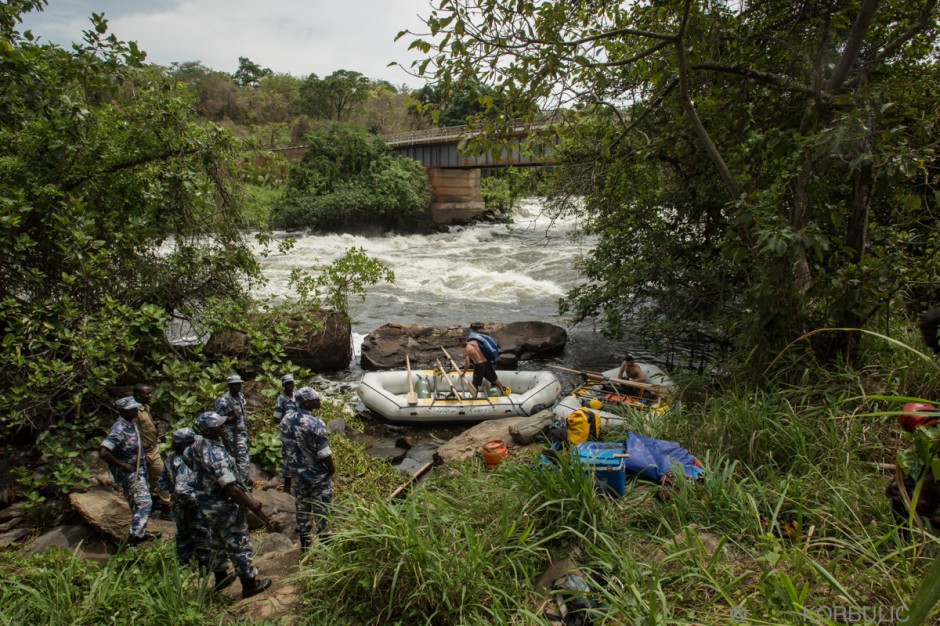 Put-in scene with Military Police checking us out. Stress decreased measurably when they figured out the only ones we might harm would be ourselves. 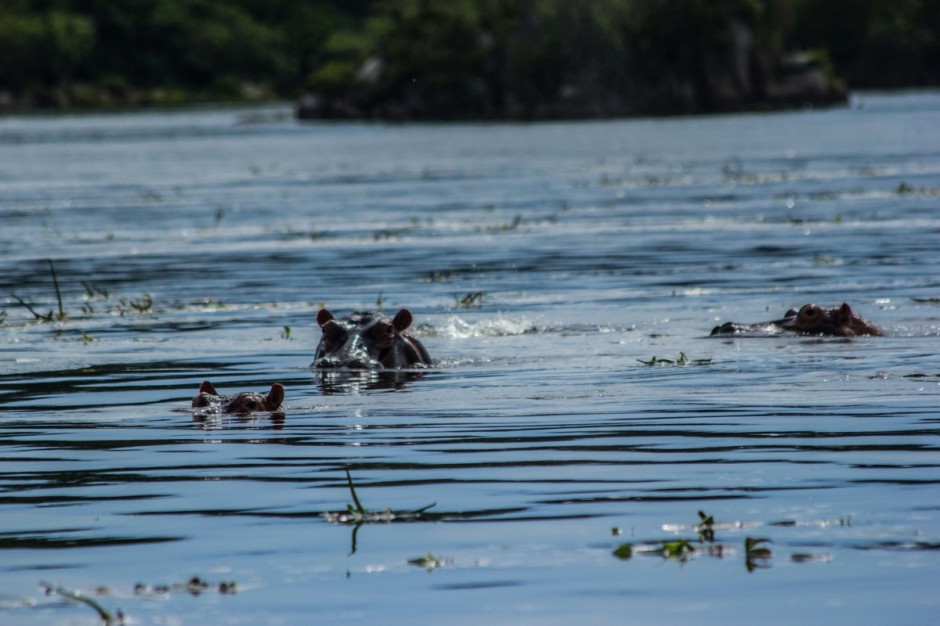 Hippos. At camp. In the rapids. Everywhere. 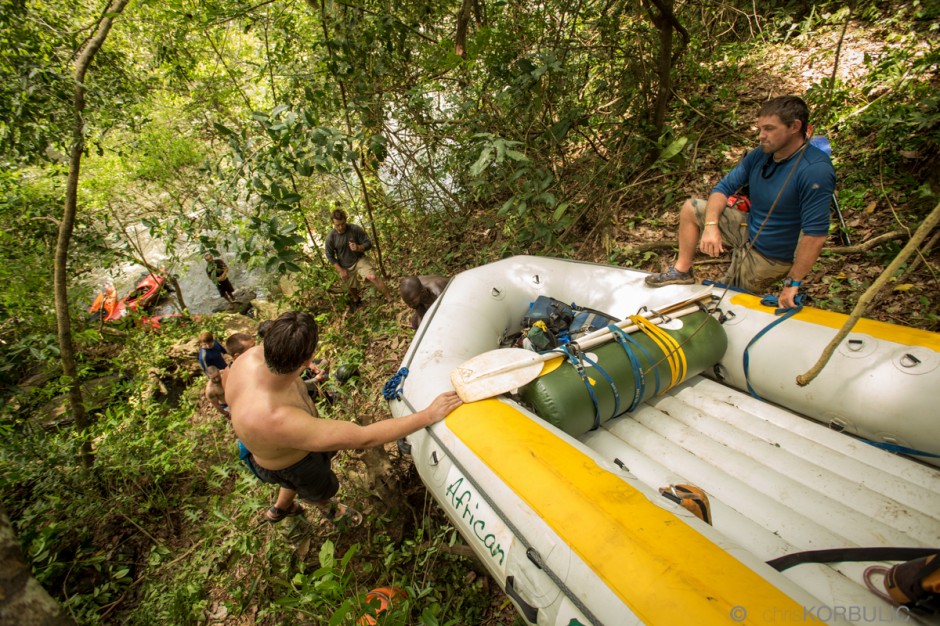 The hippos are everywhere, but at least they maintain great trails that we can use to portage the rafts around an unrunnable falls. 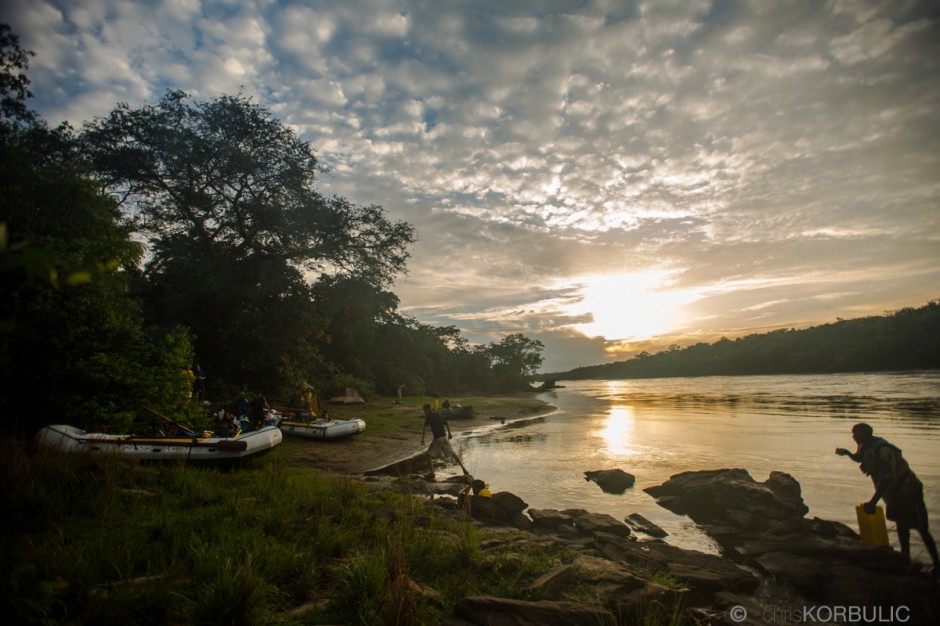 Sunrise at the last camp, day 5, with significant change in water level over night. 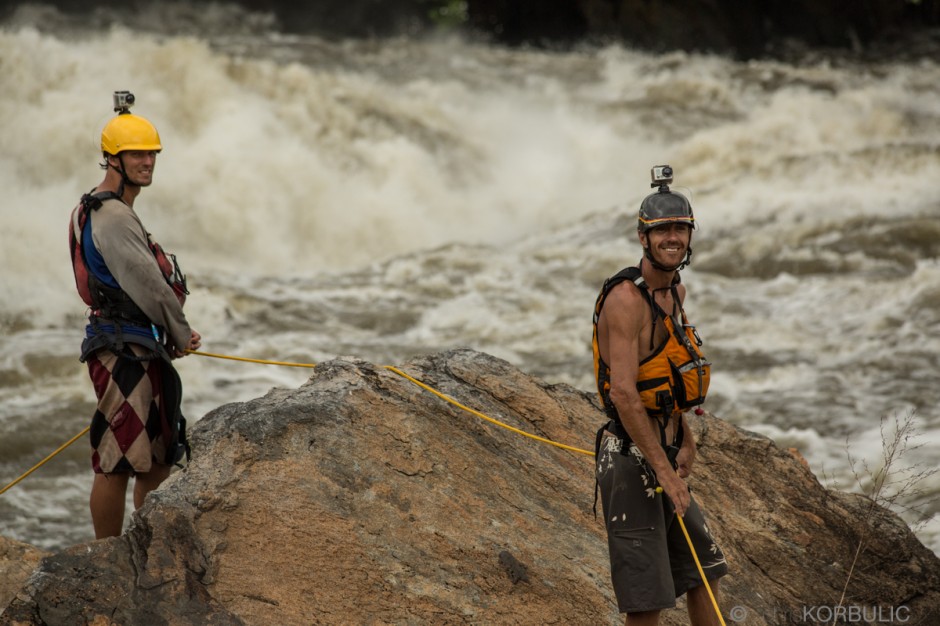 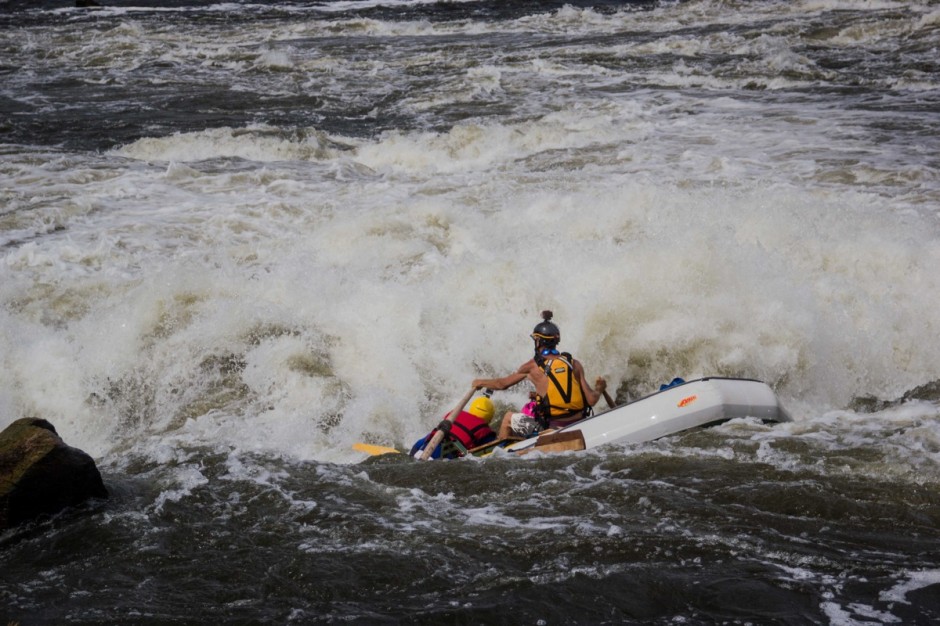 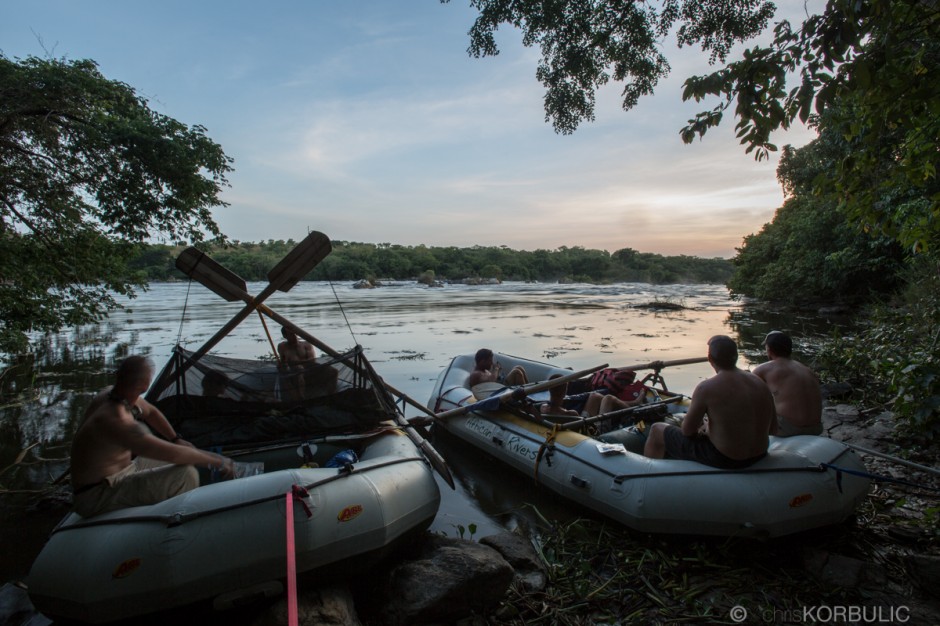 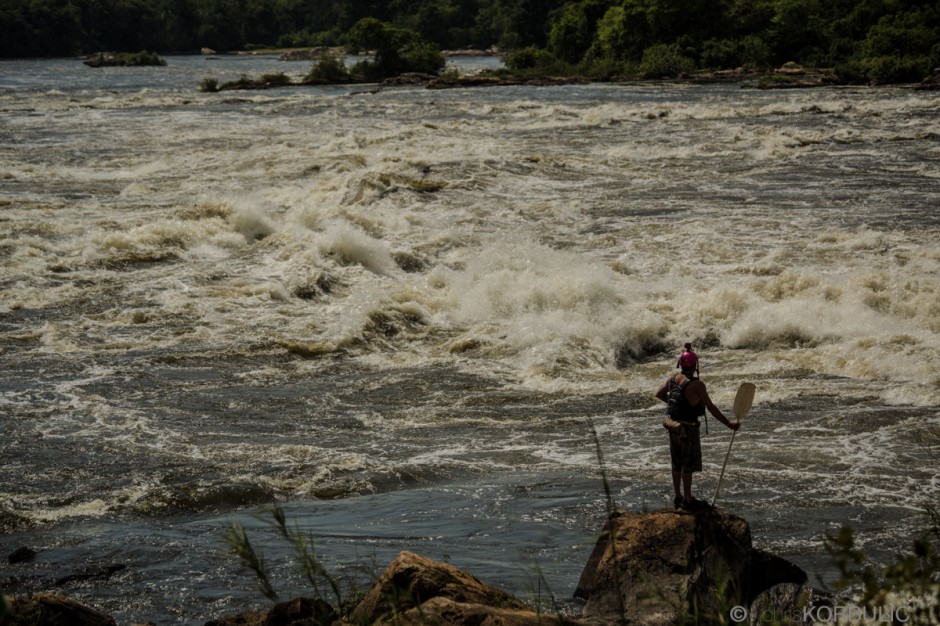 Guide Davey O'Hare scouts a channel that the rafts will have to avoid, day 2. 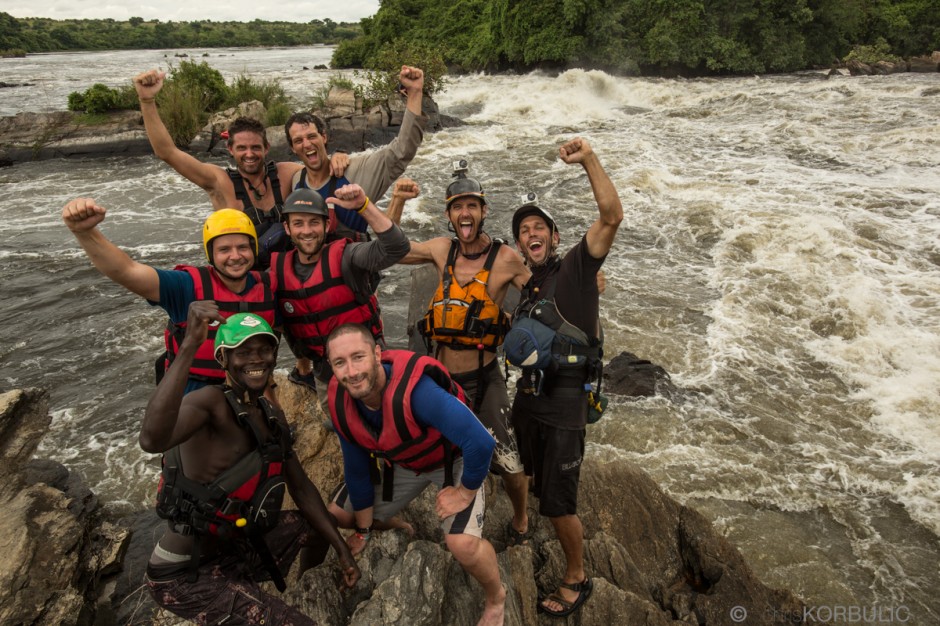 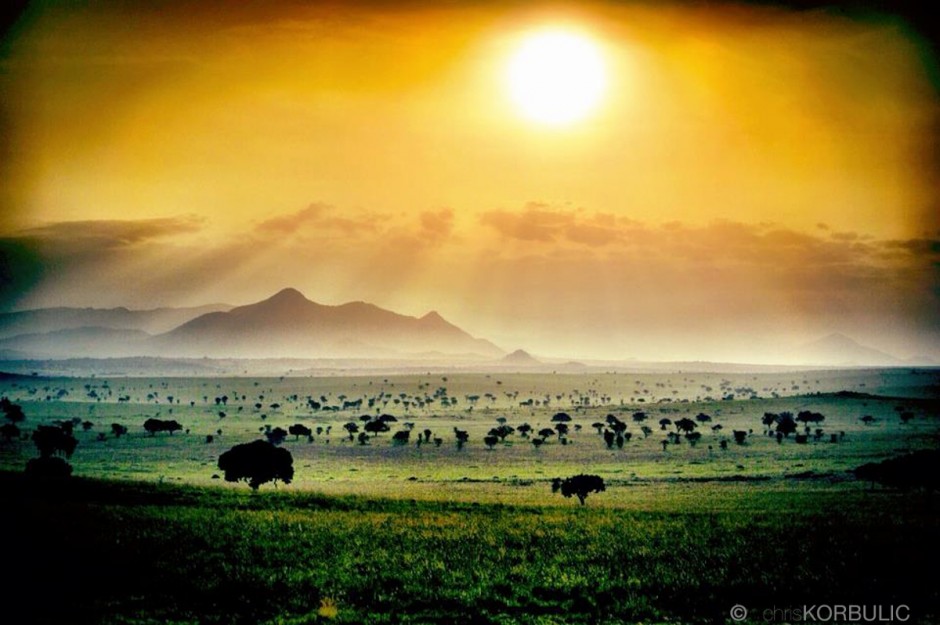 Tagged
Paddling Uganda Ambassadors
What did you think of this story?
Meh
Good
Awesome
✖
travelstoke
Download the mobile app
stoked by