IRELAND IS ONE of those places that always draws me back. This past February did not stray from this pattern; it ended up being one of the wackiest runs of waves I’ve ever witnessed, and we did our best to surf as many of them we thought doable all over the country, avoiding one day that had the biggest waves I’ve ever seen in my life.

I linked up with my good friends Mickey Smith (check out his short film Dark Side of the Lens), Fergal Smith (no relation), and Tom Lowe for a stretch that has been deemed February week, because for the duration of time these guys have been charging big surf there, this week has always been a cracker. Mick works with cameras and has documented the Irish ocean in a truly unique way, capturing incredible events in some of the most radical seas on Earth. Fergal and Tom are his counterparts that have been charging the heavy, heavy reefs like animals and doing so at a skill level that is in the top caliber. They are the real deal, accustomed to the cold and harshness of it, and loving the solidarity they have at these crazy spots.

I got to Mick’s home as this run was starting. Had one day to acclimate, get equipment dialed, and then it was on. Day two, we were surfing down in front of the daunting, majestic Cliffs of Moher, which loom 800 vertical feet overhead as you bob around below feeling really small. It’s an amphitheater unlike any I’ve surfed—the way the sound of crashing waves reverberates, the cacophony of bird sounds, the actual proximity to them you are riding waves—it’s sensation overload the whole time until the suit is off. Twenty-foot slabbing lefts were on offer this day with the wind and swell as it was, and we all scored. It was a complete session of crazy rides and wipeouts. Scoring a day like that made the trip feel complete, but that was only the beginning…

We migrated north the next day for a two-day swell. The first day we surfed a slabbing left reef, which became the early iconic slab wave of Ireland after Joel Fitzgerald surfed it in Andrew Kidman’s film Litmus, and we got it as good as it gets. Ten- to 20-foot roping tubes. Tom and Ferg were going wave for wave on the heaviest things coming in, putting on a historic tube session. Next day we surfed Mullaghmore—a 30- to 40-foot boil ridden, cold-water version of Tahiti. We got out at daybreak, and the first set I saw fold over on the reef seemed like a joke it was so heavy. We had one ski between us, and I watched the guys go first. Tom is a bit of a nut, and he was ready to ride first and subsequently got whipped into the biggest things coming in and making ’em! Our goal was to each bag some nuggets, just each get a mental one and we did. I had a couple very memorable waves and we all went wipeout-free.

Following the winds and waves around the country is the way it works during these runs. Because things change so quickly, If you drag ass, you’ll miss the limited windows of time that all the conditions are right. Exhausted from being constantly in motion, we went back west after those two days for one of the biggest swells I’d ever seen was coming in.

The morning of the swell, Fergal woke up really sick. He couldn’t get out of bed. It was a meant to be thing, I think, because we would have surfed if he hadn’t become ill, and it was the most dangerous ocean I’d ever seen. We would have attempted to tow into 60- to 80-foot monsters. The buoys were 38 feet at 17 seconds, and there were outer reefs throwing the wackiest slabbed-out tubes on the biggest waves I’ve ever seen. I’d say 80 feet is a conservative estimate. Tom said he would have driven me, but the feeling was not there. We had no safety net, so it would have been make or break to the fullest. Instead, we went around to the pub that afternoon for decompression pints, which were some of the best pints ever. I’m sure they would have been better if we had surfed, but there’ll be another time for that pint.

There was one more amazing session back at the Cliffs again, but this time at Aileen’s, the big tubing right. Thick fog was blanketing the land at dawn when we awoke, and it seemed like surfing was a write-off, but the guys said sometimes it just pours off the cliffs and the ocean is clear. They were spot on. As fog poured off the cliffs in a slow cascade, 20-foot tubes spun beneath. Only in Ireland! We went down a treacherous goat path, weaving back and forth into the guts of Moher.

[Editor’s note: For more on Rusty’s time in Ireland, check out the current issue of The Surfers Journal.] 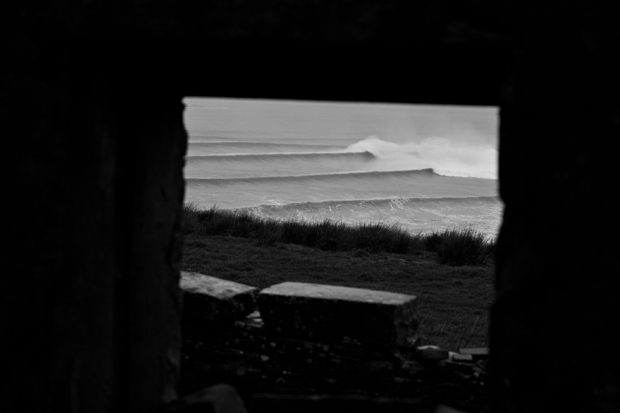 waves out the window

This old cottage straddling the hillside was slowly decomposing. What a cool place to call home! 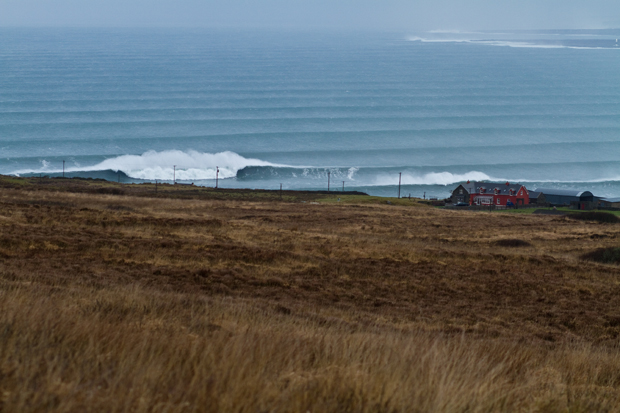 This is from the massive day we didn't surf. There were all sorts of mysto waves breaking, just like this one. 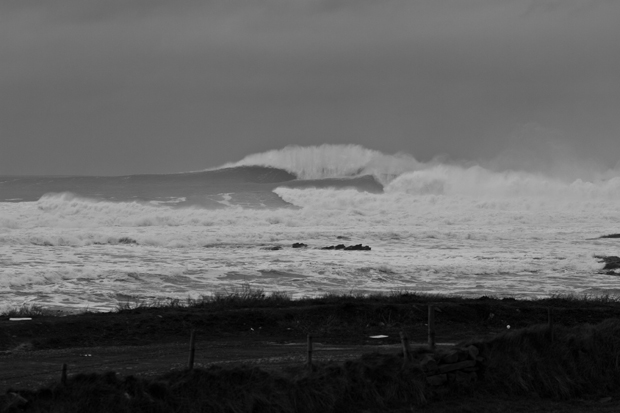 This is another seldom-seen wave breaking on the massive day. Had we know about this wave earlier in the day, I would have seriously considered surfing, but we got there just before the storm moved in with unruly winds and rain. 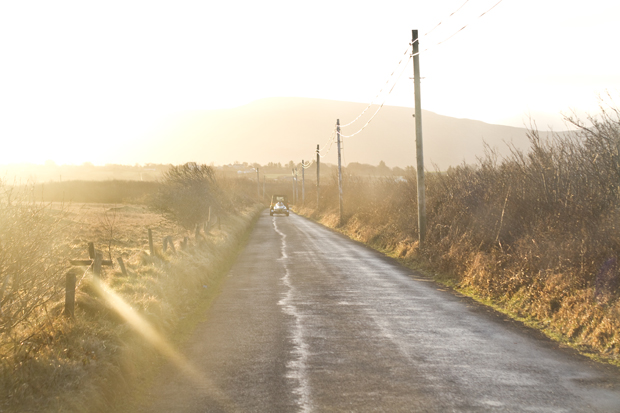 Driving narrow roads at dawn with surf in mind are synonymous with Ireland. That's Fergal leading the way. 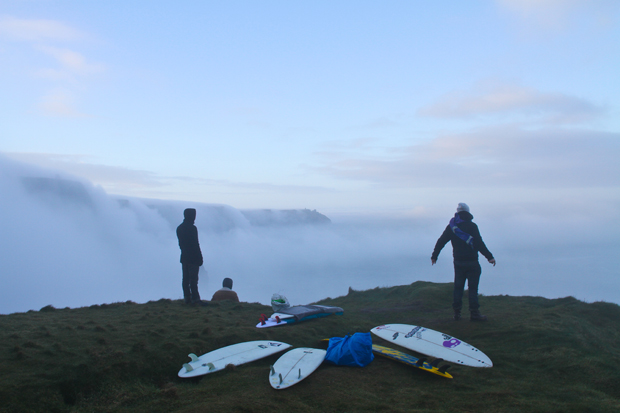 Sunrise somewhere in the country outside Sligo. We had a handful of frozen, foggy mornings—unpleasant stuff but part of the landscape. 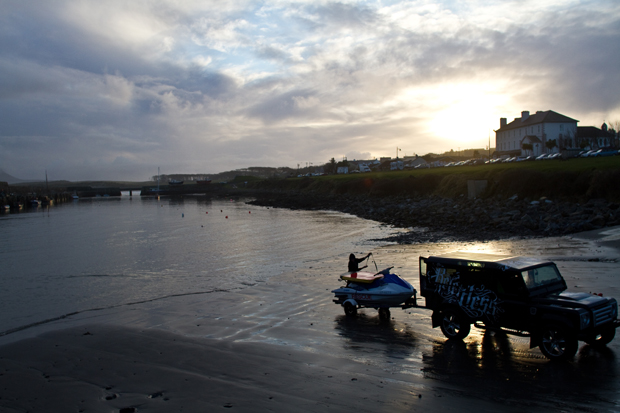 Some places have boat ramps, others require you just pull up on the harbor beach at low tide. Fergal with his machines that make the heavy-water surfing possible. 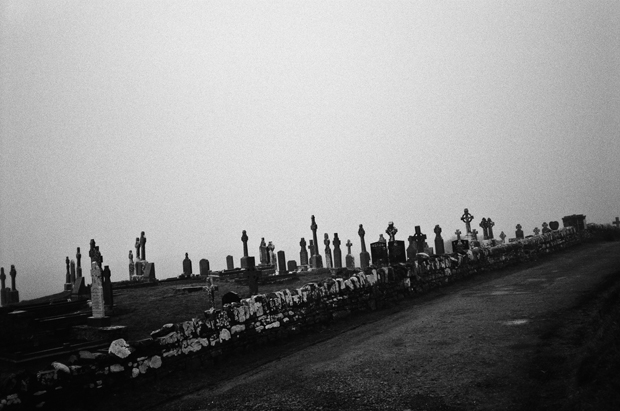 I like being places with a sense of antiquity, they balance out my Southern California-centric take on the world. 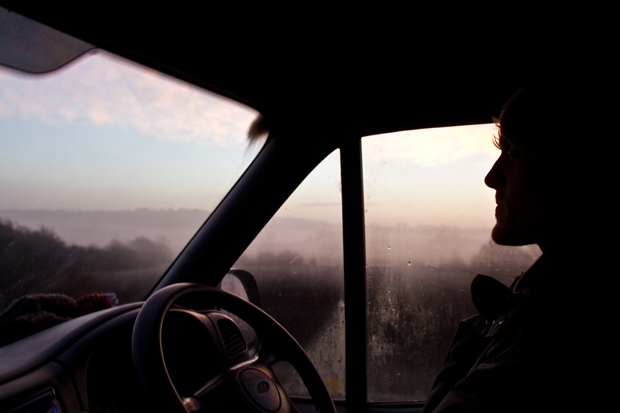 Mickey Smith is a legend, a gifted lensman who has been blowing minds with his imagery and motion film from Ireland. It's always a pleasure to link up with him. 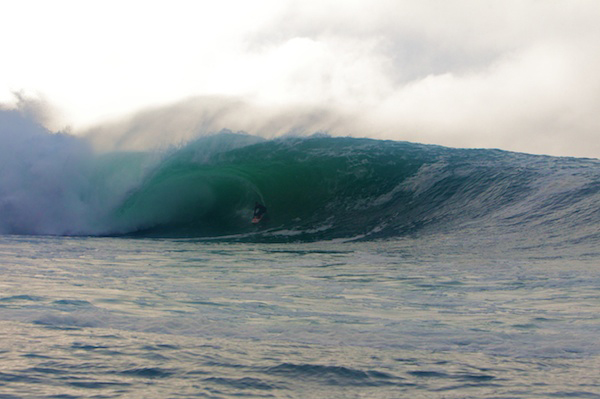 This is me during our first session of the week. It is easy to get washed into the cliffs at this spot, the base maybe 100 feet away. This is one of the most spectacular arenas in the world to ride waves.

Tagged
Surfing Ireland
What did you think of this story?
Meh
Good
Awesome